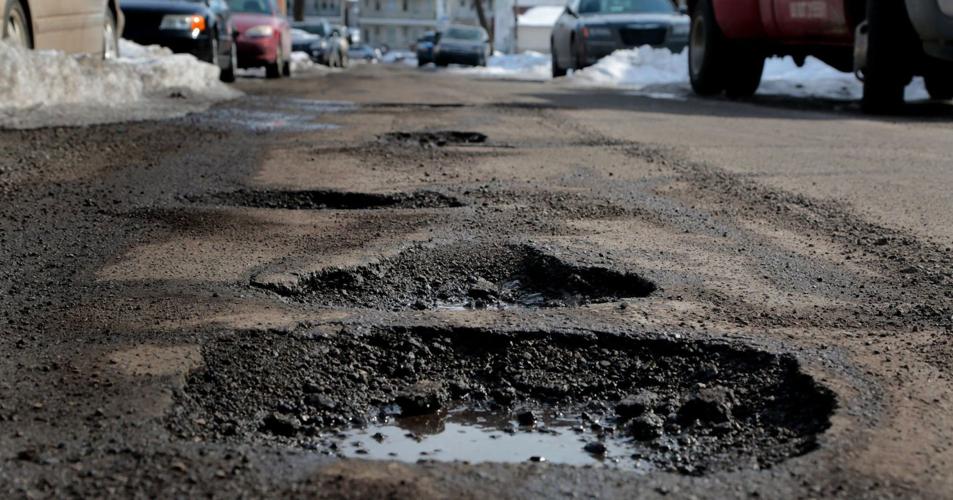 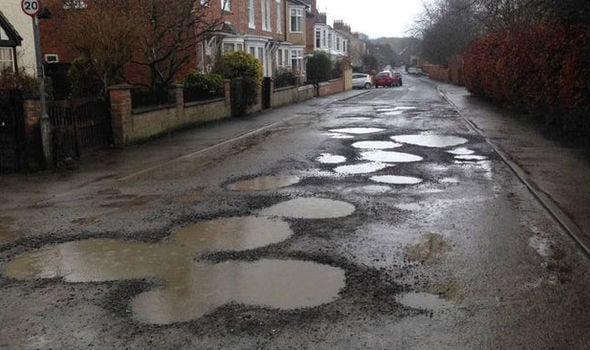 Pothole formation begins and is sustained by poor road drainage coupled with the wear and tear of traffic over pavement surfaces. 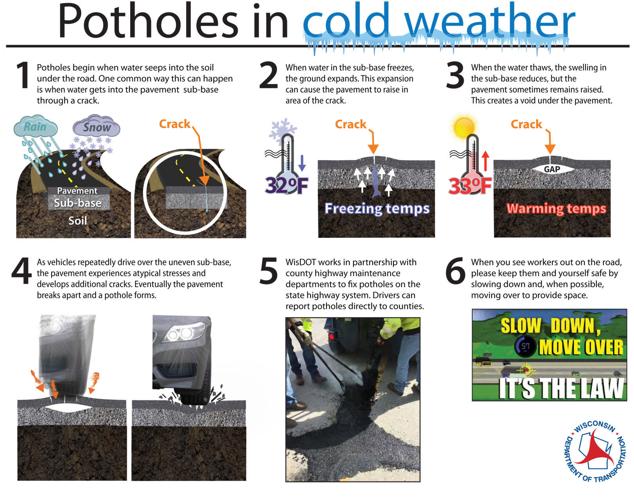 1. “a circular hole formed in the rocky bed of a river by the grinding action of stones or gravel whirled round by the water”

2. “a pot-shaped hole in a road surface”

3. “a usually minor difficulty or setback”

For drivers on local roads, county highways or interstates, potholes are a combination of all of the above: holes in the roadways which cause minor difficulties and much annoyance.

In our area, every year following the snow, ice and slush season, many of our paved roadways become pockmarked with potholes. We know one when we see one, and know how it feels to have a vehicle wheel bump through one.

But what exactly is the nature of the beast?

To get to the bottom of potholes, we asked pavement expert Deb Schwerman, director of engineering for the Wisconsin Asphalt Paving Association.

“Potholes are a type of pavement structural failure of the roadway surface due to water intrusion of the underlying layers,” she said.

To qualify, these failures must be characterized by two factors: water intrusion and traffic loading.

In other words, to create a pothole, you need pavement, water and vehicles.

Because potholes are created by water erosion coupled by physical wear, they occur in roadways paved with semi-porous asphalt rather than watertight concrete.

“There are other pavement distresses that aren’t necessarily potholes,” Schwerman said. Crumbling, broken pavement at the edge of the road is not a pothole, for example.

Pothole proliferation can be due to pavement age, weather factors, poor roadway drainage or a failed pavement repair after underground utility work.

Over the lifespan of asphalt it oxidizes, turning from black to gray. As it ages, it naturally begins to get brittle and develops cracks.

“If you don’t take care of cracks they’ll break,” she said.

Add to this winter weather.

“In winter when water gets in, it will find those pockets of air and will freeze. As long as it’s frozen, it’s not going to cause a problem because everything is a solid,” Schwerman said. “Come spring, however, ice melts, turns to water and does its worst. The water forces spaces in the pavement to open up and washes out subgrades — materials below the surface that make up the roadbed — and soils start washing out material on the way to its next destination.

“That’s why it’s so much worse in spring,” she said.

Once the materials begin to break down, the surface is ripe for breakage with the constant movement of vehicular traffic. For this reason, potholes typically appear in the wheel path of a traffic lane, Schwerman said.

Hard to keep up

From a municipal street maintenance perspective, keeping up with the spring pothole crop is a dauntless task, said Brian Cater, deputy director of public works and Kenosha city engineer.

“Potholes show up and typically we’re filling them all over the city,” he said.

Another challenge, especially in our climate, occurs when water mains break underground during the winter. Utility crews need to break the pavement to get to the problem, and a thorough repair of the road may not be possible.

“When we’re in the middle of winter and fixing potholes, we usually do a temporary fix to get through the season then come back to make it as permanent as we can,” Cater said.

Schwerman is sympathetic to the need to do quick patches during the winter but emphasizes the need for good repairs down the line.

“Make it safe for the traveling public to buy time, but then it is truly about cutting out the weakened pavement, clean-cut asphalt and go around the area — not just to repair the asphalt; fill it in and roll it.”

If Schwerman and other roadway builders had their way, areas in need of repeated pothole repair would receive rehabilitation from below the ground up.

This, however, is an expensive proposition, Cater said.

“To fix (potholes) properly, we would do a patch of the pavement, removing more pavement than pothole and put in a new patch, or redo the whole road with resurfacing or reconstruction,” he said.

“All those are costly, which is why you see us filling potholes, often at same location every year,” Cater said. “In a city our size, we do everything we can to keep up with the potholes we have.”

Long-term solutions may also involve addressing root causes. Advises Schwerman, “The biggest thing to do is to keep the water out. Maintain our roadways and catch it before letting water into the pavement structure.”

While every pothole in Kenosha cannot be perfectly and permanently repaired, Cater said the streets department is aware that “Band-Aiding” the same potholes over and again is not the answer.

“We realize that one area is not the same as the next; we look at individual areas that need larger improvements,” he said. “If an area is degrading due to drainage issues, we look at a larger rehabilitation project.”

Major projects in the heart of Kenosha will soon rumble to life as major redevelopment projects get going.

Community leader and former Kenosha County Board member Jerry Gulley was remembered Sunday for his efforts to help and unite others.

Kenosha police responded to multiple calls for gunfire that sent a man with a gunshot wound to the hospital early Sunday.

Pothole formation begins and is sustained by poor road drainage coupled with the wear and tear of traffic over pavement surfaces.