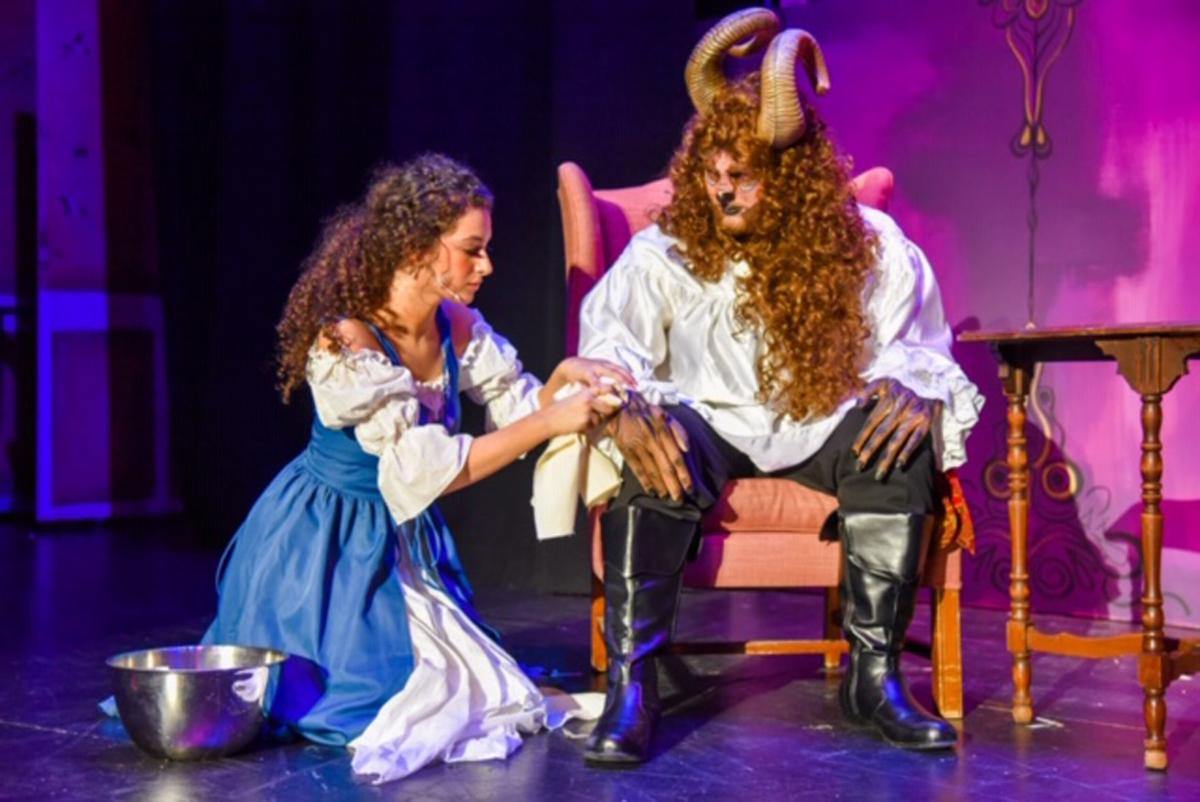 Alexandra Daher, as Belle, shares a scene with Kyle Matrise, as the Beast, in “Beauty and the Beast” at St. Joseph Catholic Academy. 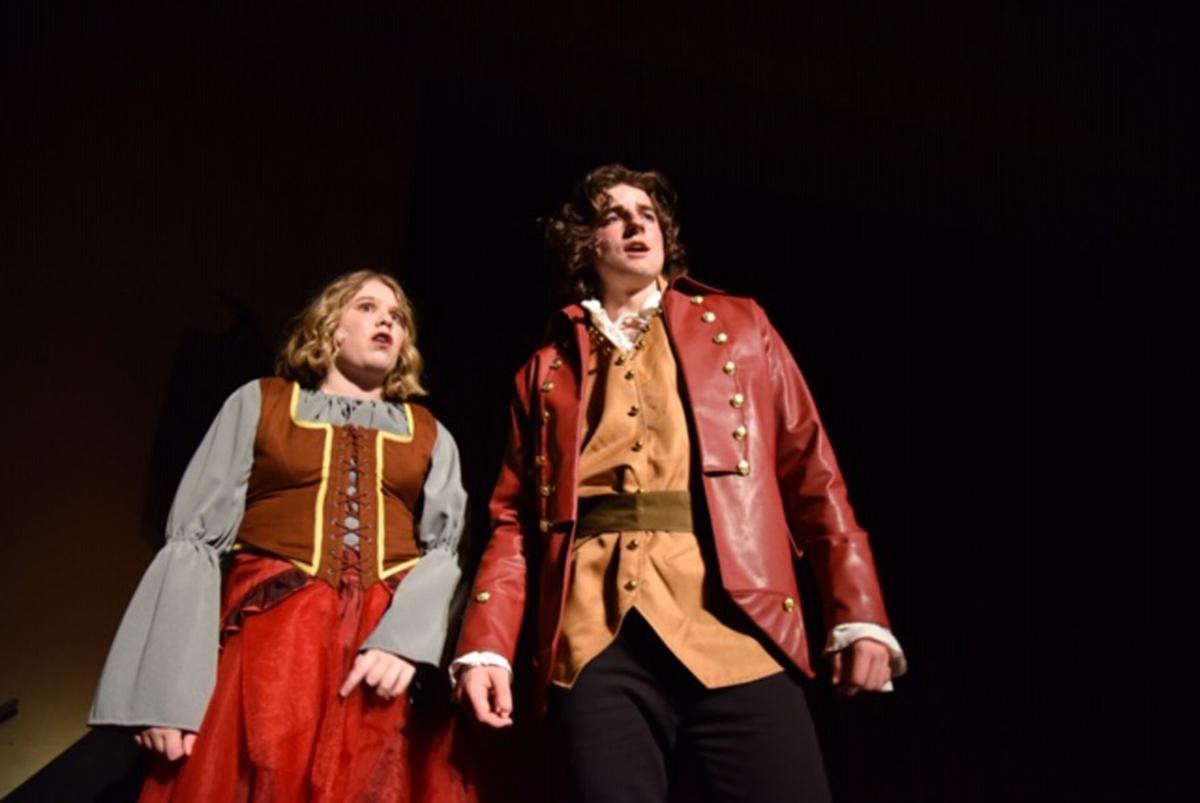 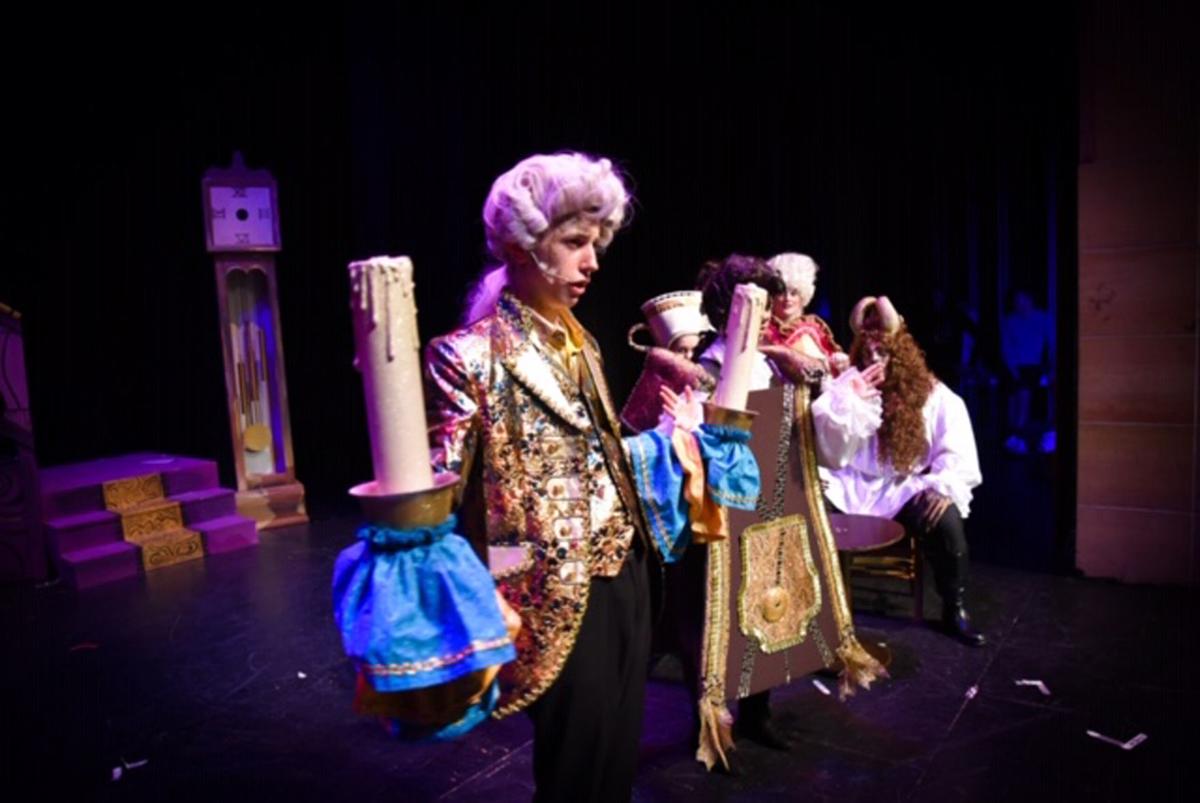 Thomas Connolly plays Lumiere in “Beauty and the Beast.”

When Julie Seidl was selecting a show for the spring musical at St. Joseph Catholic Academy, she thought big.

The musical, opening Friday night at the school, is “Beauty and the Beast,” based on the beloved Disney animated film.

A lot of high schools, she said, won’t consider doing the show because of its size.

“It’s a huge show,” she explained. “There are hundreds of costumes — elaborate costumes — and the sets are enormous.”

Luckily, she added, “we have a great team working on the show.”

Seidl actually started planning for the show a year ago, enlisting her aunt, Carole Bausano, to make costumes.

“She’s 80 years old, and she made all the lead character costumes,” Seidl said. “She loves doing it, but she hasn’t done this many costumes in a while. I gave her a lot of lead time, and I am helping her, too.”

Costumes for the show’s ensemble characters were also made by Bausano, for the Children’s Theatre Academy (which Seidl operates with Kristin Northern). “We borrowed those for this show,” Seidl said.

When we talked on Tuesday, just a few days before opening night, Seidl said the cast “is so ready to perform for an audience. These kids are amazing. They are doing this just for fun, on their own time after school, and they are so talented and hard working. And their parents are so supportive, too.”

The cast features 80 students, including seniors Alexandra Daher, who was crowned Miss Kenosha at the school in February, as Belle; Kyle Matrise as the Beast; and Patrick Connolly — who starred as Shrek in the school’s 2019 musical — as the arrogant Gaston, who pines for Belle.

Seidl, who says she “just loves this show,” chose to produce it this year “because we have the right kids. We weren’t ready for it last year.”

Another reason she was eager for this “Beast” of a musical: “It’s never been done before at St. Joe’s.”

Seidl said audiences should come expecting “a magical show. It’s elaborate and is just so Disney; it’s the true expression of Disney.”

That “true expression” extends to the choreography by Michael Gosney.

“He’s a former student of mine who now owns a ballet school in Chicago,” she said, “and he designed the choreography in honor of the animated film. It really honors the Disney film.”

This is Seidl’s second show at St. Joseph Catholic Academy, but she shares a long history with the school.

Back when it was St. Joseph High School, Seidl taught physical education there and directed the annual school musical.

“I did that for about 18 years,” she said. Then she left to teach for the Kenosha Unified School District.

Now that she is retired, she’s back at St. Joseph after about 25 years.

“That was the happiest time in my life, teaching at St. Joe’s,” she said. “They were looking for a director and asked me to come back, and I was happy to do it.”

When the animated Disney film version of the story was released in 1991, Seidl said she thought the concepts of “beauty” and “beast” were “fairly simple.”

Now, however, she finds the story’s themes to be more complex, asking in her Director’s Notes, “What does it actually mean to be human? In a tale of transformation where there is a real threat of losing one’s humanity, what separates human from beast? What role does beauty play as a defining human characteristic? Or does it?”

“In our times, with all that’s going on in the world,” she added, “it’s not so simple to tell what’s beauty and what’s a beast.”

What: “Beauty and the Beast”

Cost: Tickets to the St. Joe production are $12 for adults, $10 for senior citizens and $5 for students and will be sold at the door, starting one hour before each performance. You can also purchase tickets online at www.sjcatheater. ludus.com/index.php

Also: The Young Americans of Italian Descent are again hosting a free performance of the show for senior citizens. The show starts at 6 p.m. March 19; doors open at 5 p.m. (Free seating will also be provided for the friends or relatives transporting the senior citizens.) For more information, email Linda Wasilevich at lindaw@chickenchamps.com or call 262-697-9106.

Here is a collection of the stories featured in this week's GO Kenosha section, inserted into the Kenosha News on March 12. This week's editio…

Alexandra Daher, as Belle, shares a scene with Kyle Matrise, as the Beast, in “Beauty and the Beast” at St. Joseph Catholic Academy.

Thomas Connolly plays Lumiere in “Beauty and the Beast.”