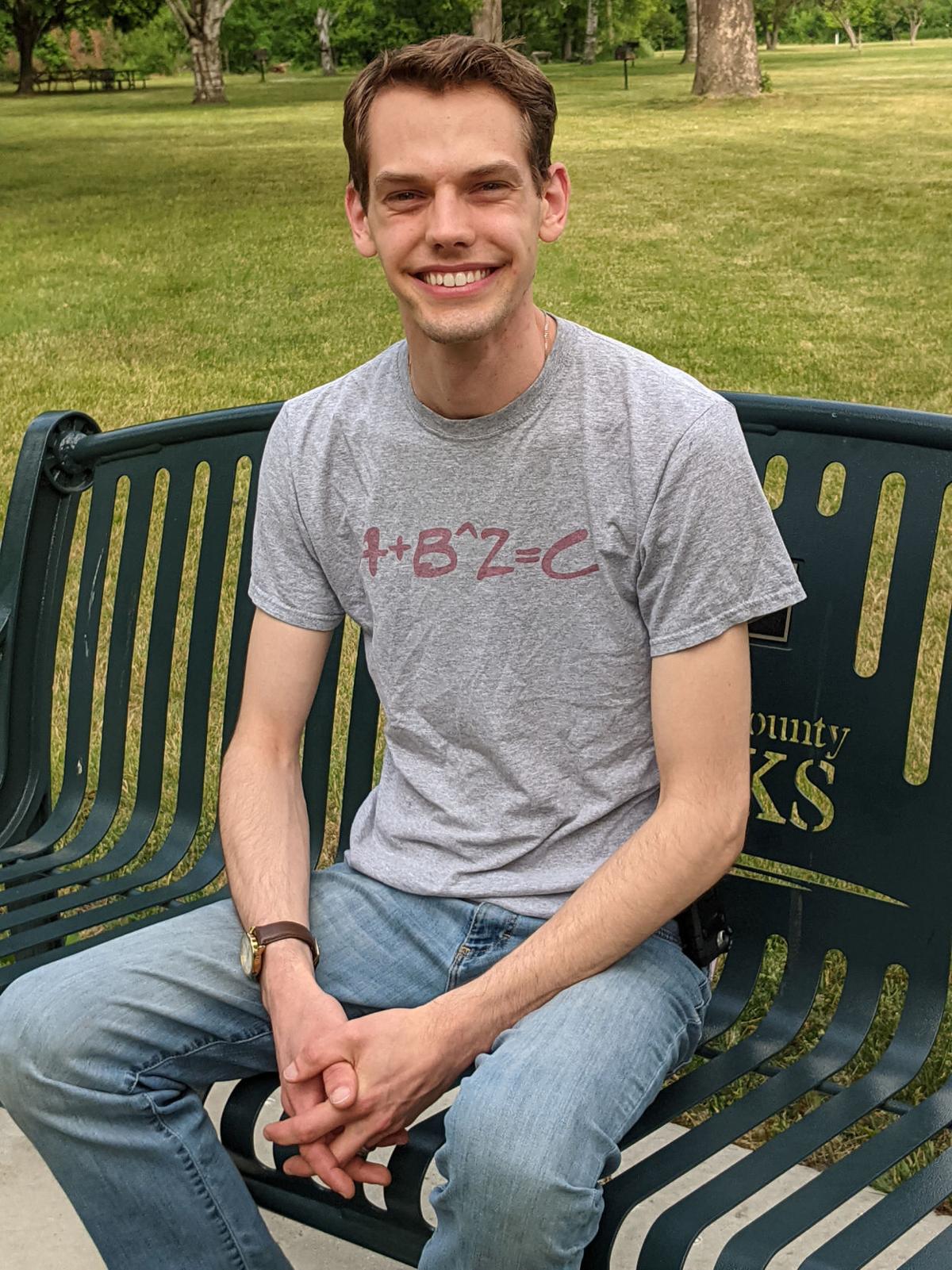 Actor Cole Conrad, a 2019 UW-Parkside graduate, poses in Petrifying Springs Park Monday. Conrad is part of this summer’s Shakespeare in the State Parks Tour, which kicks off June 12 in Bong State Recreation Area. 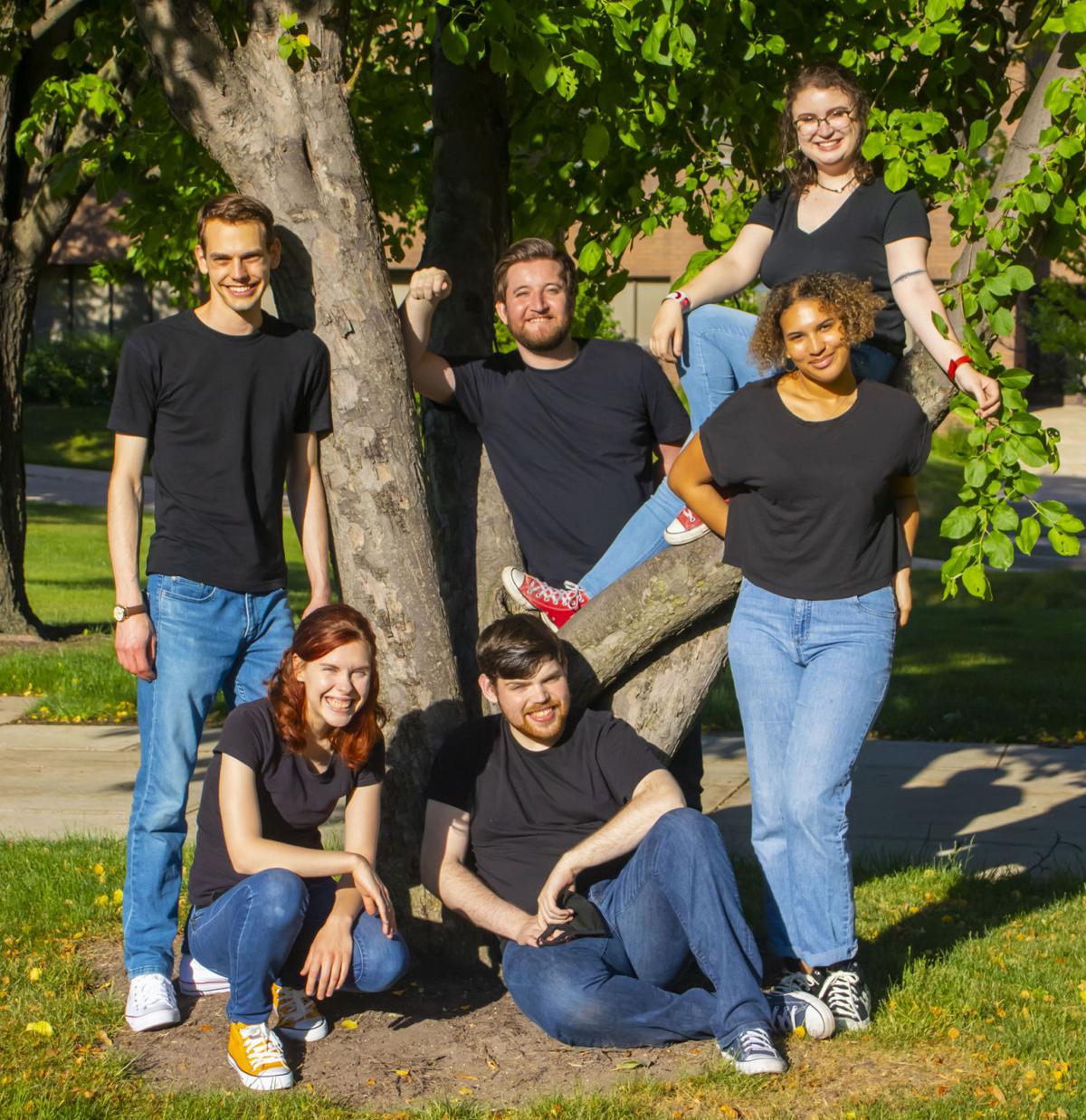 The 2021 Summit Players troupe includes, from left, Kenosha resident Cole Conrad, Maura Atwood and Jackson Hoemann (in front) and Kaylene Howard. Standing behind the tree is Michael Nicholas, with Caroline Norton sitting in the tree. 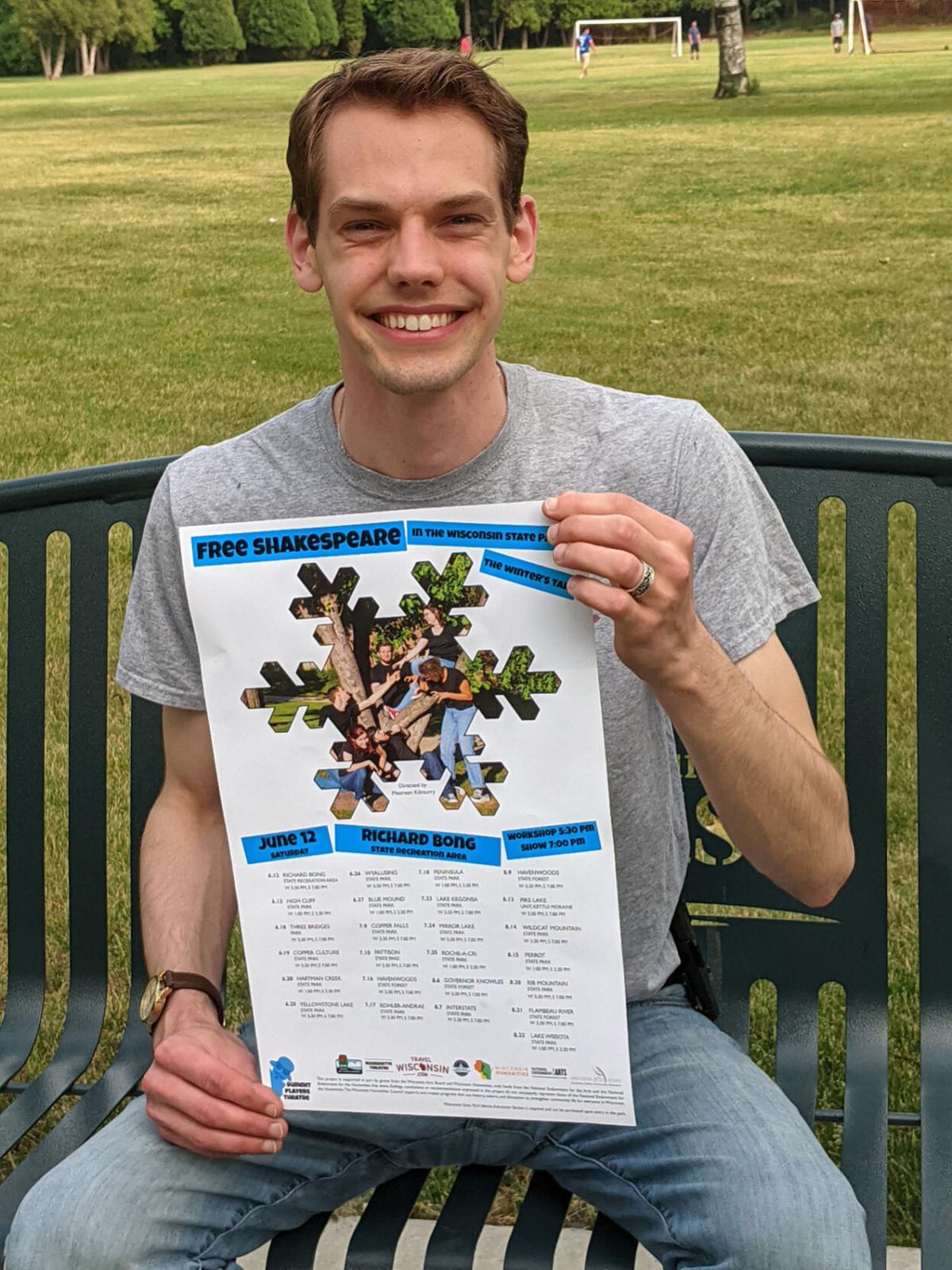 Cole Conrad holds up a poster for the Summit Players’ summer Shakespeare season. The tour kicks off June 12 in Bong State Recreation Area. 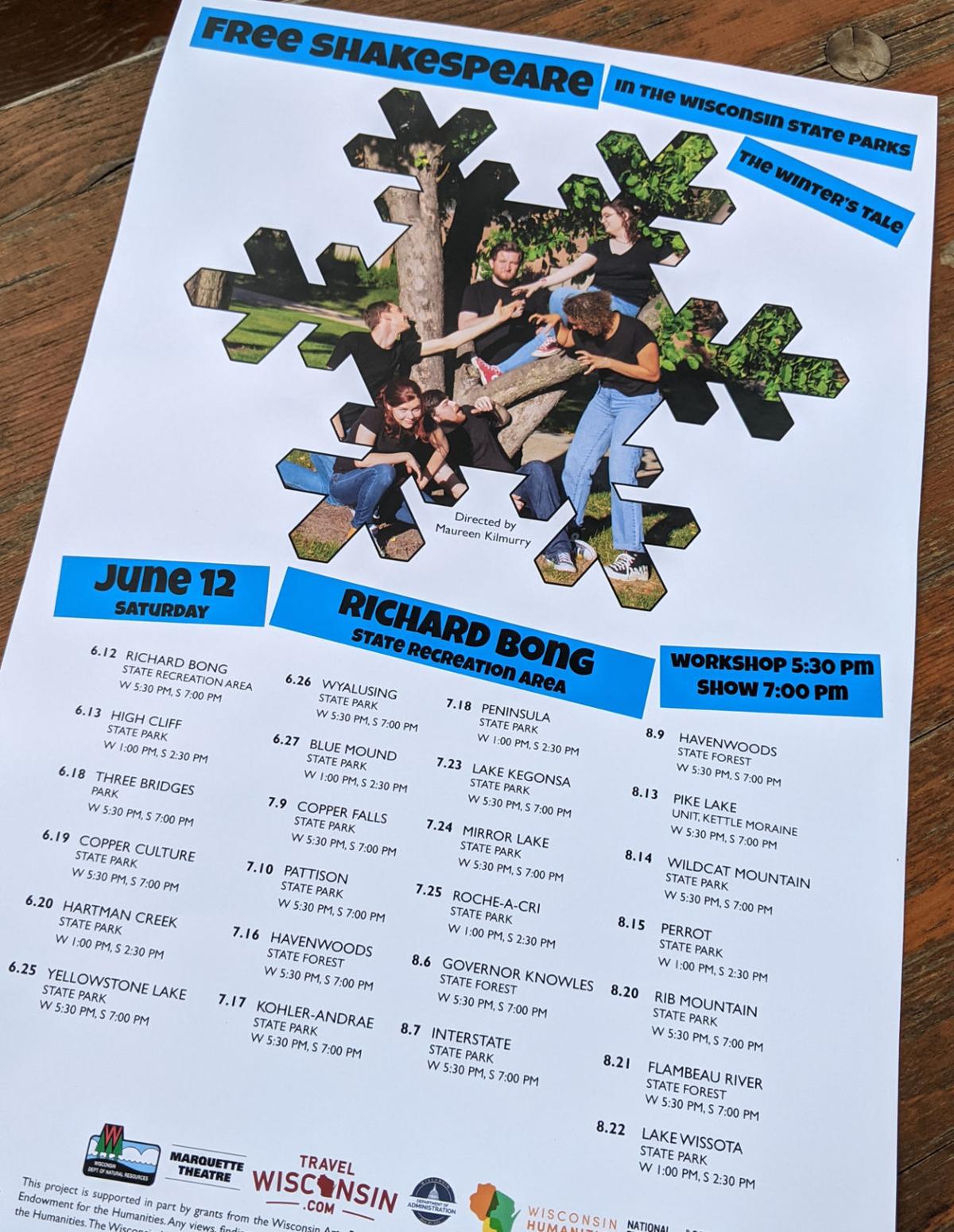 If the thought of sitting through one of Shakespeare’s plays sends a chill down your spine, read on.

Yes, Saturday’s performance is of “The Winter’s Tale” — a title that brings to mind mittens and frostbite — but Caroline Norton wants everyone to get a warm, fuzzy feeling about it.

First, the performance takes place outside, in our own Bong State Recreation Area, where it will be another warm Wisconsin summer day.

More importantly, however, the show is part of the Summit Players Theatre’s 2021 Shakespeare in the State Parks tour.

The focus is on fun.

“Our No. 1 goal is to make Shakespeare accessible,” Norton said, “making the language clear and fun and understandable. It’s also accessible in that we are coming to you. It’s a free performance; you just get there, and the rest is taken care of.”

She encourages everyone (not just kids) to attend the pre-show workshop, starting at 5:30 p.m. Saturday.

The free 45-minute workshop goes through the plot of the show and helps modern-day audience members understand the language of a play written in 1623.

As the troupe’s education director, Norton developed the workshop. She also acts in the play.

During the workshop, audience members take part in theater games and a discussion about Shakespeare, said Cole Conrad, a Burlington native who is performing with the troupe this summer.

Conrad — who graduated from the University of Wisconsin-Parkside in 2019 and now lives in Kenosha — said “The Winter’s Tale,” with a plot involving jealousy, death and long-lost babies, “is like a fairytale, with kings, princes, princesses and betrayals. I can’t wait to connect with the kids and teach them how to do some of these characters.”

Norton, a native of Alabama who started with Summit Players as a Marquette University theater student in 2018, said “Winter’s Tale” is what she calls “an interesting show.”

“It’s not a traditional comedy,” she explained. “It has funny elements and some tragic elements, too. This show teaches us a lot about letting go of hate and embracing love.”

The show also focuses on “the ability to forgive yourself when you make mistakes and to learn from mistakes. That’s a really important message,” she said. “You have to learn to trust your friends and loved ones.”

Conrad said the play, written almost 400 years ago, remains timely for a nation still grappling with a global pandemic.

“The king makes a mistake, but he keeps hope alive that the situation will be remedied and things are going to get better,” he said. “It’s also about the king forgiving himself. As a country, we are doing the same thing. We are forgiving our mistakes and moving forward now.”

The show is also made accessible by being trimmed to squeeze into a tight (for Shakespeare) 75-minute running time.

“We fit a complicated plot into that time slot,” Norton said. “Our director (Maureen Kilmurry) is very skilled at adapting Shakespeare’s scripts. She makes it all happen.”

Norton, who’s been with the troupe for three seasons, said the shows “have all been really well received by audiences.”

In 2019, the troupe tackled “Romeo and Juliet,” or what Norton calls “our first swing at a tragedy.”

Performing a tale about doomed teen lovers worked just fine in a park setting, she said.

“We respect the emotional intelligence of children,” Norton said. “They are able to handle these dramatic tales. We just trusted they would get it, and they did. To see young kids connect to the story was really great.”

This year’s tour covers 24 parks and will take the players all over Wisconsin.

Though Conrad and Norton struggle to name a favorite park — “That’s like asking a mother to name a favorite child,” Norton said — she did mention a particular fondness for Copper Falls, in the far north reaches of Wisconsin near Lake Superior, and Mirror Lake, near Wisconsin Dells. (The troupe performs on July 9 at Copper Falls and on July 24 at Mirror Lake. You can find the entire schedule and an interactive tour map at www.summitplayerstheatre.com.).

“The state parks are so beautiful,” Norton said. “We’re going to a lot of new parks this year, so I may add a few new favorites to my list. We’ve made it our mission to get to parks all over the state.”

As for Conrad — who lives near our own Petrifying Springs County Park — he’s using this summer tour to visit parks around the state.

“I have to admit, I’m not very well traveled to our state parks, though I’ve heard raves about Copper Falls,” he said, sheepishly. “After this summer’s exploration, that will change.”

The shows are performed rain or shine — moving inside if the weather is bad.

What: Summit Players Theatre's production of Shakespeare's “The Winter's Tale”

When: Saturday (June 12). A 45-minute educational workshop begins at 5:30 p.m., with the show starting at 7 p.m. The play runs about an hour and 15 minutes. All ages are welcome. Seating is general admission on a first come, first served basis.

The plot: The story gets complicated, but at its heart it focuses on Leontes, king of Sicilia, who plays host to his friend Polixenes, king of Bohemia. After a bout of unfounded jealousy, however, Leontes sets in motion a tragedy of death and an abandoned baby. The story resumes 16 years later, with Florizell, the son of Polixenes, falling in love with a young woman ... could she be the long-lost princess?

More information: Find the full list of shows in 24 different state parks, and other information, at www.summitplayerstheatre.com

At the Summit Players' state park shows this summer:

Masks are optional for vaccinated people and are encouraged for folks who have not been vaccinated yet.

Seating will be spread out to allow for social distancing.

Vaccination bonus: If you come to a performance and show your vaccination card or proof of vaccine, "we'll reward you with some fun exclusive merchandise."

Feeling ill? The Summit Players Theatre asks that anyone not feeling well stays home. You can join the troupe at a later stop this summer on their tour. Check the calendar, with 24 shows around the state, at www.summitplayerstheatre.com. (Also, a filmed version of the show will be available on the website for viewing from home.)

The Bard at Bong: Shakespeare in the State Parks tour starts here

A cold wind will be blowing through Bong State Recreation area Saturday.

Actor Cole Conrad, a 2019 UW-Parkside graduate, poses in Petrifying Springs Park Monday. Conrad is part of this summer’s Shakespeare in the State Parks Tour, which kicks off June 12 in Bong State Recreation Area.

The 2021 Summit Players troupe includes, from left, Kenosha resident Cole Conrad, Maura Atwood and Jackson Hoemann (in front) and Kaylene Howard. Standing behind the tree is Michael Nicholas, with Caroline Norton sitting in the tree.

Cole Conrad holds up a poster for the Summit Players’ summer Shakespeare season. The tour kicks off June 12 in Bong State Recreation Area.