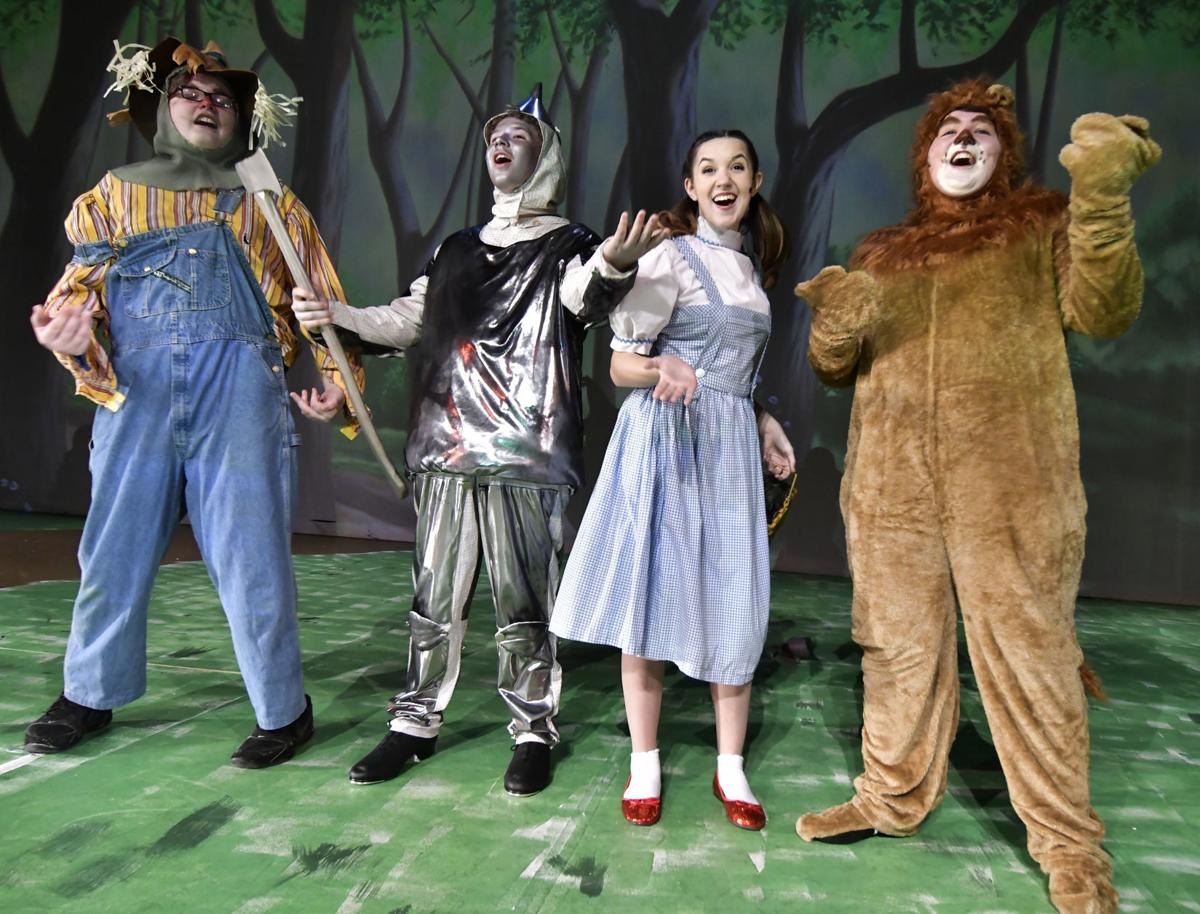 From left, Brodie Williams, Mayson Hermann, Carly Mikula and Tim Peters sing and dance in this scene from “The Wizard of Oz” at Indian Trail High School. 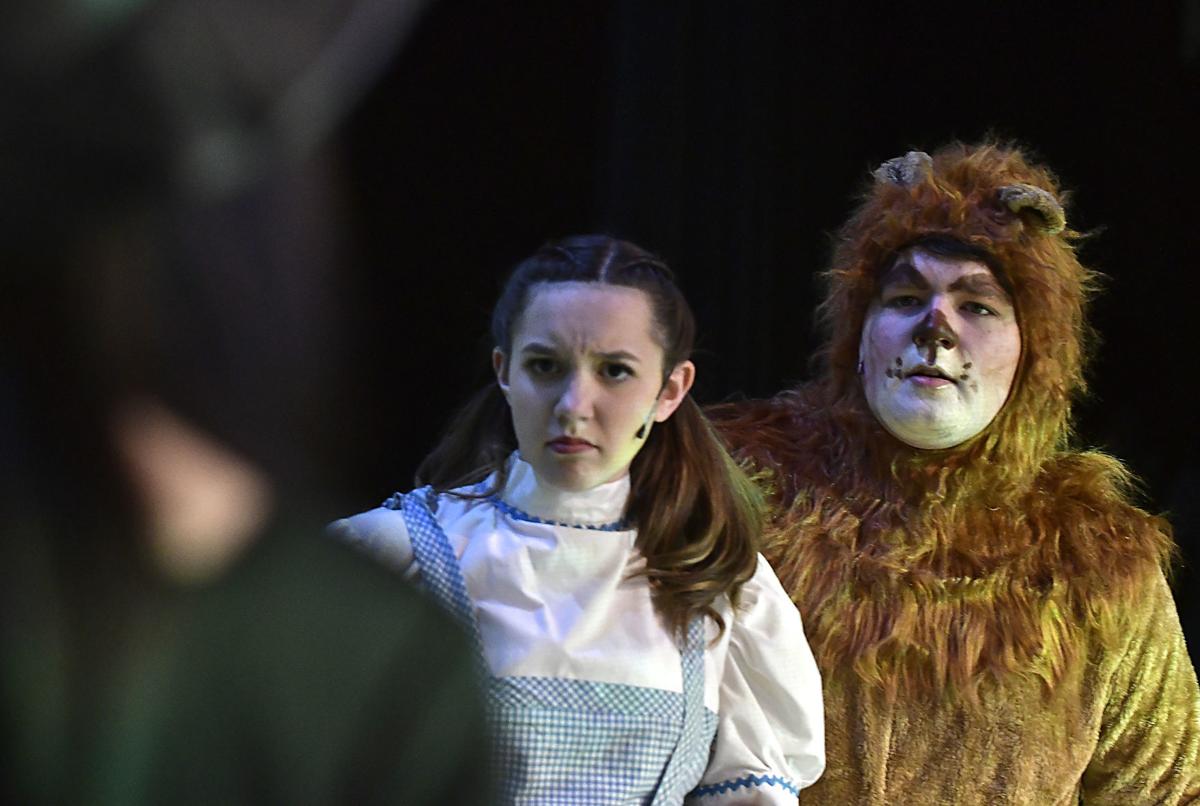 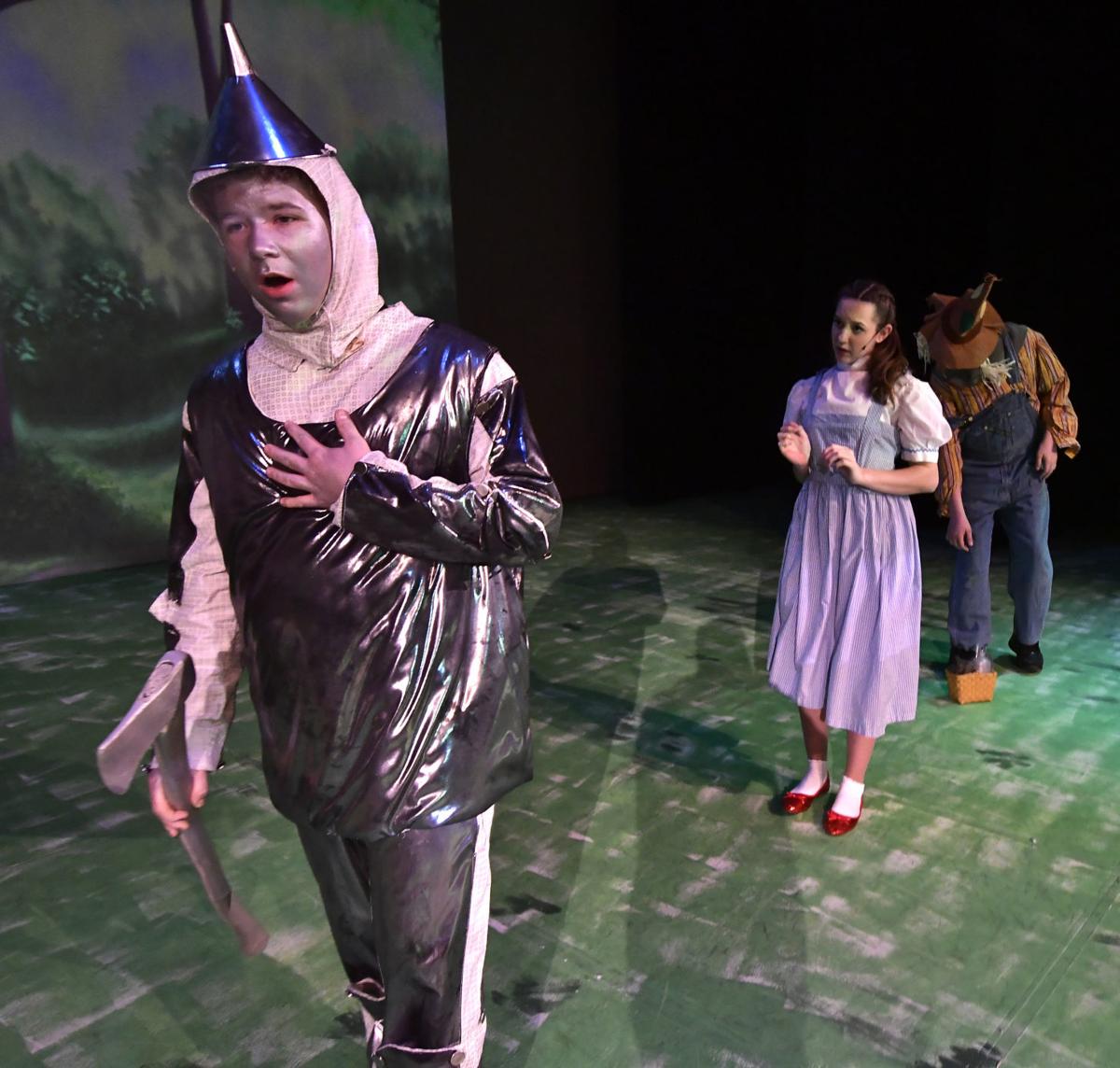 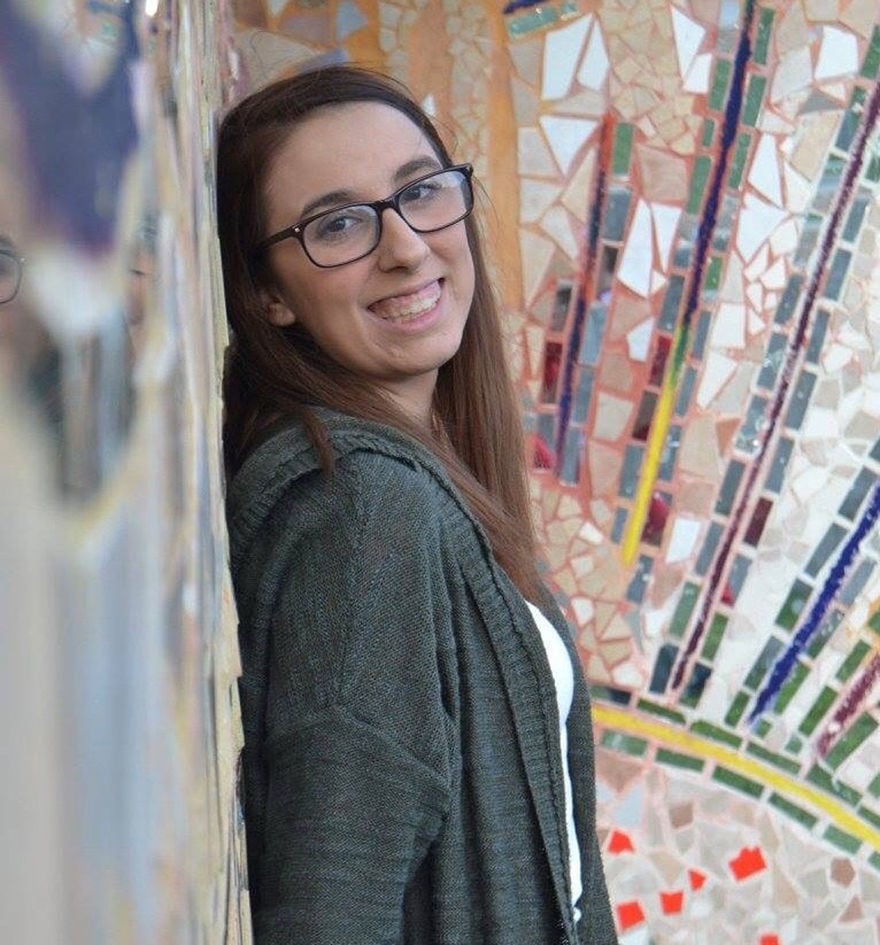 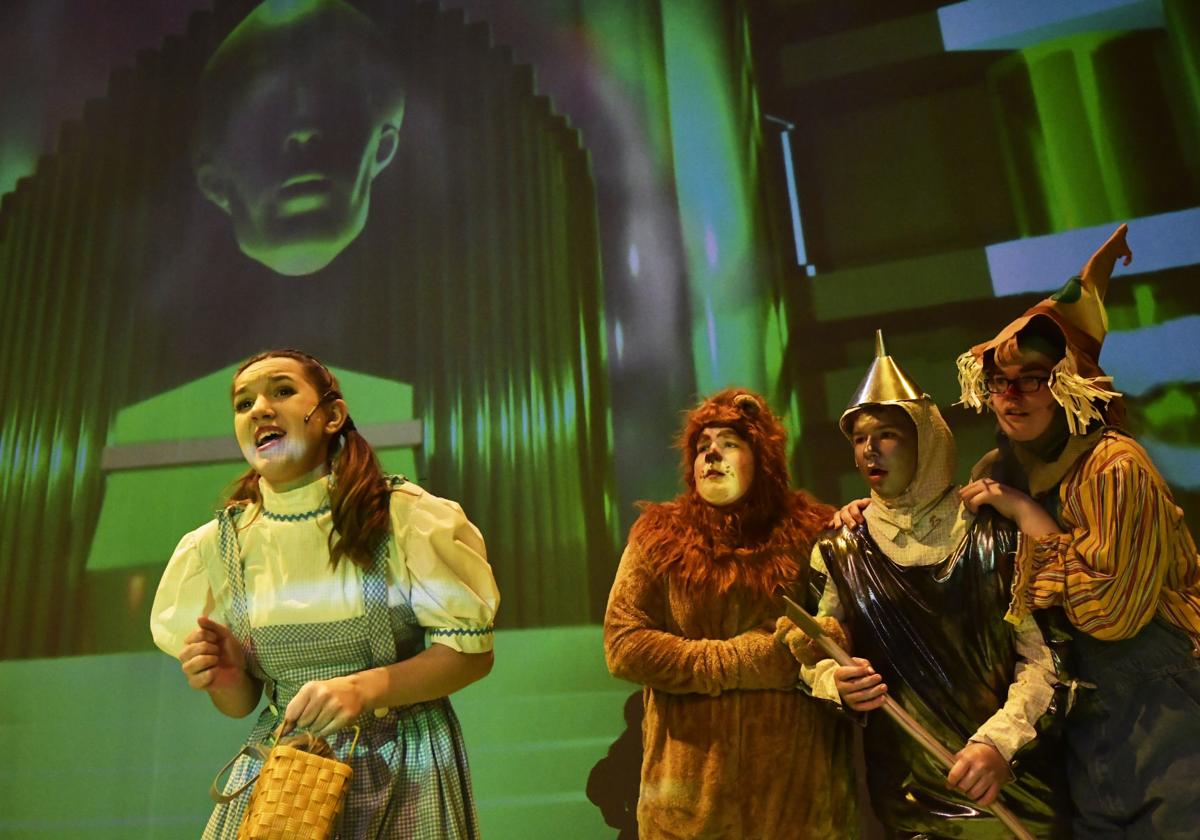 From left, Carly Mikula, Tim Peters, Mayson Hermann and Brodie Williams try to meet with the wizard in this scene from “The Wizard of Oz” at Indian Trail High School. 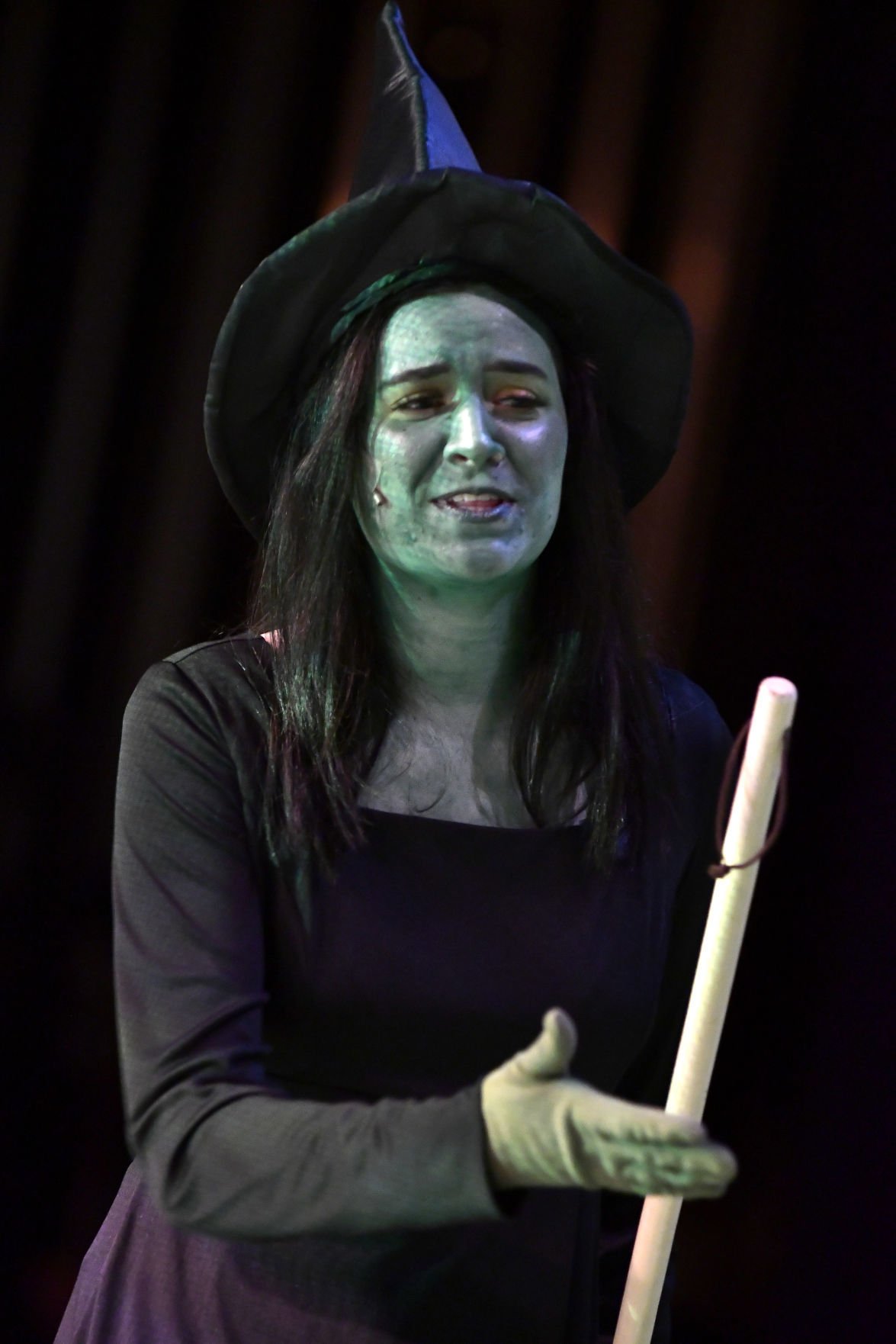 Livy Shreve plays the Wicked Witch of the West in “The Wizard of Oz” at Indian Trail High School. 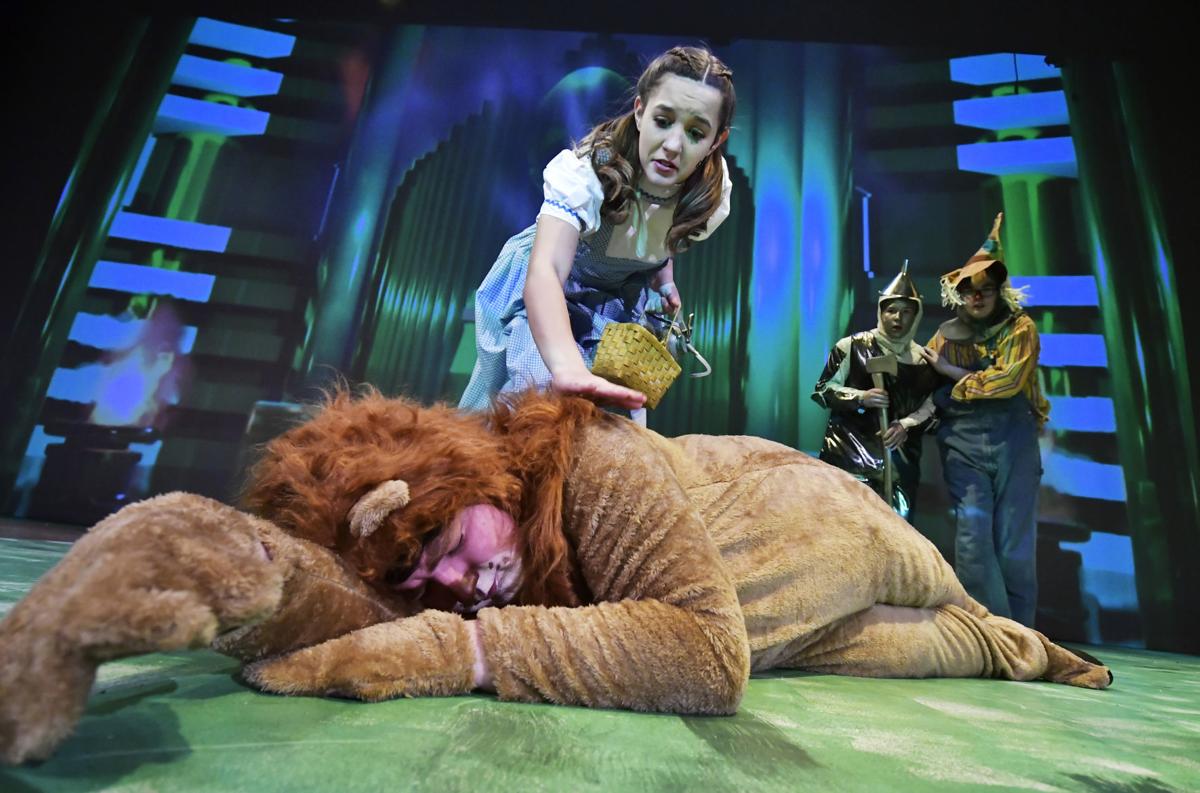 Dorothy, played by Carly Mikula, tries to wake the Cowardly Lion, played by Tim Peters, in “The Wizard of Oz” at Indian Trail High School. 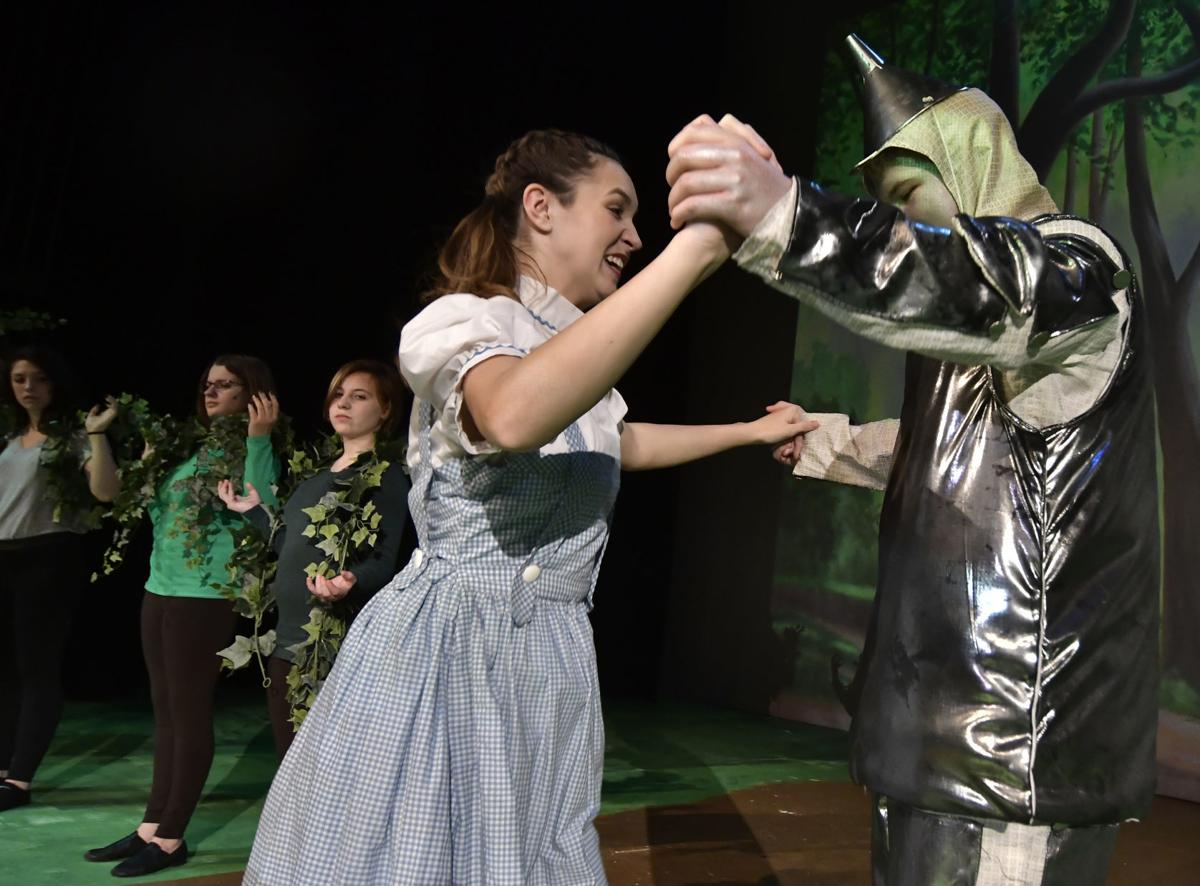 Dorothy, played by Carly Mikula, and the Tin Man, played by Mayson Hermann, dance in “The Wizard of Oz” at Indian Trail High School.

When audiences head down the Yellow Brick Road in the Indian Trail High School Auditorium, all the usual suspects will be there: Dorothy, the Scarecrow, the Tin Man, the Cowardly Lion, the Wicked Witch of the West and, of course, Toto, too.

But they’ll also see something that wasn’t in the landmark 1939 movie version of “The Wizard of Oz.”

This stage production of the story also includes a dance sequence, “The Jitterbug,” that was filmed but later cut from the movie.

“That number is two minutes of dancing,” she said during a break in a rehearsal last week. “It’s a tap and swing dance number, and all the kids bought tap shoes for it. It’s a really cool piece.” (The dancing breaks out when the Wicked Witch sends her Jitterbugs into the Haunted Forest to attack Dorothy and her friends.)

Snyder: Saying goodbye is never easy (even when it's 'just' an office)

Saying goodbye is never easy (even when it's "just" an office)

She also enjoyed putting together the “Munchkinland” musical number, which brings together younger students, playing Munchkins, with the high school cast members.

When first working with the cast members, she said, “I like to ask them ‘Can you do flips? Can you breakdance?’ If they say yes, I put those moves into the show.”

This cast, she said, “is super talented and super fun to work with. The kids tell me I’m hardcore, which is so cool for me. We’re pulling out all the stops for this show, which is a new twist on a classic story.”

Saavedra will graduate in May from Carthage, where she designed her own dance and theater program.

“My dream is to be a high school theater teacher and choreographer, and this experience has reinforced that decision.”

The production features about 50 students. Here are some of the major roles:

Dorothy: The central role of Dorothy — played so memorably on screen by Judy Garland — is double cast, played by Alex Daher and Carly Mikula.

Daher, a senior at St. Joseph Catholic Academy, said being in her first KUSD show “is a great experience. I’m making friends for life.” Playing such an iconic role “is an honor. I don’t want to mess it up, but I also want to make this role my own.”

Mikula, a ninth-grade student at Harborside Academy, is already a veteran of several KUSD productions. She finds it “a bit crazy that I’m on stage singing ‘Over the Rainbow’ like Judy Garland did. I love playing this role.” Some years ago, she was a Munchkin in a Christian Youth Theater production of “Oz” — and still sounds surprised about returning to the show as Dorothy.

Knight, a junior at St. Joseph Catholic Academy, has been involved in theater since the third grade, but this is his first KUSD show. “You create such great bonds being in a show together,” he said. “And I love the dancing.” A major aspect of the show for him is a tap dancing solo. Choreographer Saavedra said Knight asked for a tap solo, and she was happy to oblige. (“He picked it up so fast,” she said of the number, performed by both the Tin Man actors.)

Hermann, a sophomore at Indian Trail who is in his ninth show, said being in theater “helps me get a lot of my energy out. It’s a one-of-a-kind environment on stage; a judgment-free zone.” The Tin Man, he said, “is comic relief a lot in this show, and I can relate to him.” Performing such a well-known story, he added, “really motivates us to put on a good show.”

Cowardly Lion: Tim Peters has been busy in school — playing sports, singing in choir and performing on stage. Being in theater, he said, “has created a place for me that nothing else does. It sparks something in me.” The Indian Trail senior said of his character (a famously nervous King of the Jungle), “He’s braver than anyone else on stage, but he just doesn’t know it. He gets an epiphany at the end.”

Scarecrow: Brodie Williams is the only cast member interviewed who hasn’t seen “The Wizard of Oz.” Not the movie version or a stage production. Somehow the Bradford High School sophomore has avoided “Oz,” though he does say he’s “aware of the story from the pop culture around it.” Playing this role — one of the principal characters — has generated “a mixture of happiness and fear,” he said.

Wicked Witch of the West: Livy Shreve quit basketball to get involved in theater and, while she still misses the game, she’s enjoying her time on stage. The Indian Trail senior said playing a villain “is a lot of fun. I never got to do this before.” And though the musical “Wicked” is a favorite of hers, this version of the Wicked Witch is a pure villain, without a new backstory. Or course, to play the bad guy, Schreve sees the action unfold from her point of view. “In her mind,” she said, “she’s the hero.”

Glinda the Good Witch: Jane Sekas, an Indian Trail sophomore, is thrilled to be playing the Good Witch. “It’s a role I’ve always liked,” she said. “I’ve based my energy on this character: She’s light and likes pretty, pink things.” Working with other students on a show, she said, “offers so much support. There’s no judging; if you mess up, everyone understands and helps you.”

Wizard of Oz: Ian Metzger, who’s in his eighth KUSD show, said each production “is a new dynamic. You get to build something with other people and meet new people.” The Indian Trail senior said playing the Wizard offers an extra layer. “It’s a chance to act as a character who is also acting as a character. He’s trying to portray himself as a great and powerful wizard.”

Toto: Dorothy’s loyal companion will most likely be played by a stuffed toy. However, when we talked last week at the school, director Bob Allen said some of the cast members were bringing in a robot dog to try out on stage.

A key element of this production is the live pit orchestra.

It was such a hit, he’s doing it again.

“We had been talking about having an orchestra in the pit for years,” Allen said. “We’re finally doing it.”

The “we” he’s referring to is himself and Kevin Stewart, the high school’s orchestra director. He’s in the theater’s spacious “pit area” underneath the front of the stage, conducting student musicians.

“The Wizard of Oz” pit orchestra is even bigger than last year’s group, Allen said.

“A lot of kids were really excited about us doing live music again and wanted to be involved,” he said.

Peters, who plays the Cowardly Lion, said the live music helps his performance.

“My character’s ‘King of the Forest’ song has some ad-libbing in it, and with the live music, I can do it differently each time and create my own take.”

Metzger, the Wizard actor, said the pit orchestra “is my favorite part of the show. It’s great to sing with live music.”

As students jitterbugged on stage behind him and a Yellow Brick Road took shape, Allen said “The Wizard of Oz” — with its flying house, singing monkeys and tap-dancing Tin Man — offers the opportunity for audience members to forget about real-world problems for a few hours.

“With everything that’s going on in the world,” he said, “it’s nice to enjoy some songs you know, plus a dance scene you never saw before. It was cut from the film, but you’ll see it on stage.”

The biggest joy, he added, “is seeing the energy of young people who do this for the love of it.”

Synopsis: This tale, in which a Kansas farm girl travels over the rainbow to discover the magical power of home, has been entertaining audiences for generations. This version of "Oz" was written by John Kane and is based on the 1939 movie (itself based on the 1900 novel "The Wonderful Wizard of Oz" by L. Frank Baum). This version was first staged in 1987 by the Royal Shakespeare Company and sticks closely to the film version, including keeping every word of the screenplay.

"Oz" trivia: This version was filmed in 1995 as "The Wizard of Oz in Concert: Dreams Come True" and aired on cable's TNT Network. The show starred singer Jewel as Dorothy, Joel Grey as the Wizard and Debra Winger as the Wicked Witch. Jackson Browne was the scarecrow, Roger Daltrey the Tin Man and Nathan Lane played the Cowardly Lion.

Here are the stories published in this week's GO Kenosha section inserted into the Jan. 16, 2020, issue of the Kenosha News.

From left, Brodie Williams, Mayson Hermann, Carly Mikula and Tim Peters sing and dance in this scene from “The Wizard of Oz” at Indian Trail High School.

From left, Carly Mikula, Tim Peters, Mayson Hermann and Brodie Williams try to meet with the wizard in this scene from “The Wizard of Oz” at Indian Trail High School.

Livy Shreve plays the Wicked Witch of the West in “The Wizard of Oz” at Indian Trail High School.

Dorothy, played by Carly Mikula, tries to wake the Cowardly Lion, played by Tim Peters, in “The Wizard of Oz” at Indian Trail High School.

Dorothy, played by Carly Mikula, and the Tin Man, played by Mayson Hermann, dance in “The Wizard of Oz” at Indian Trail High School.