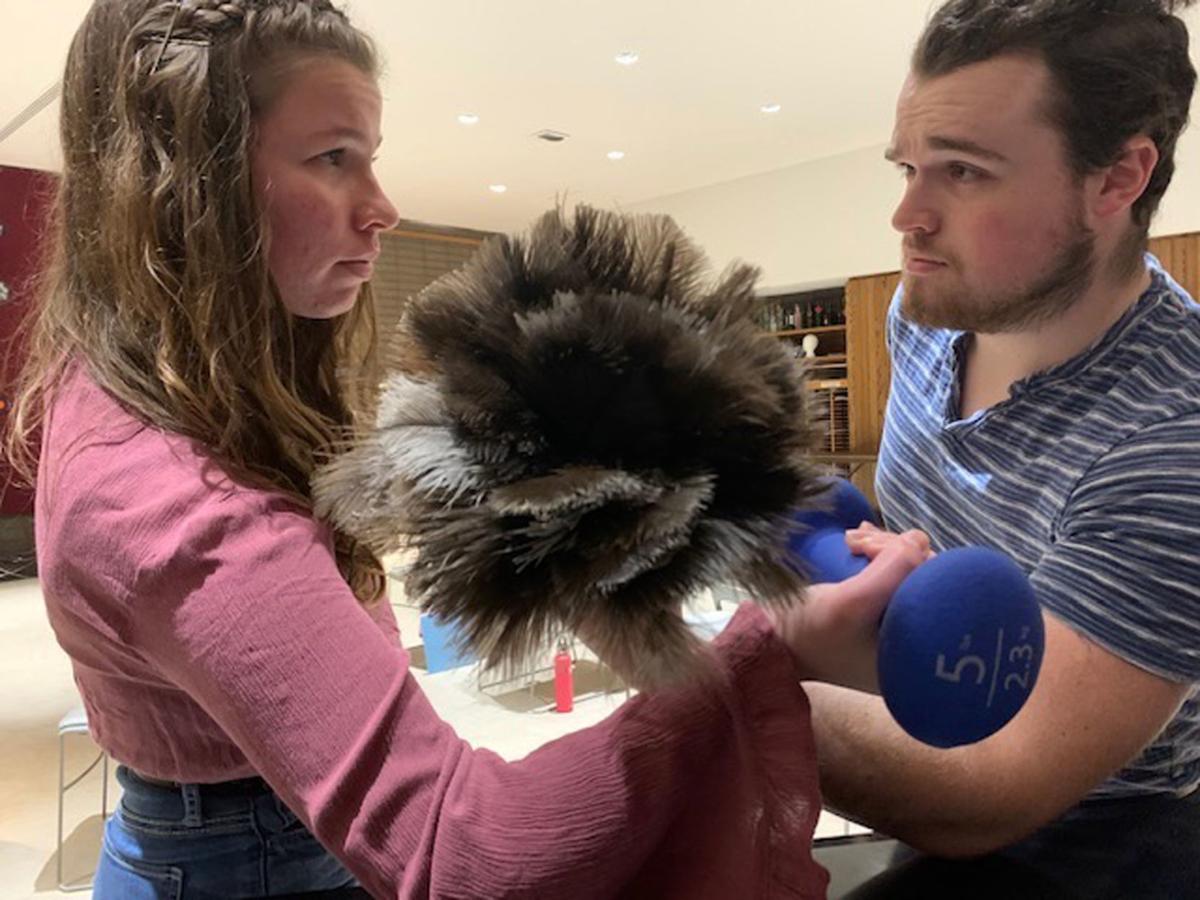 Katrina Seabright, left, and Cory Pollard play the Papagena and Papageno (the mom and dad) in the opera. 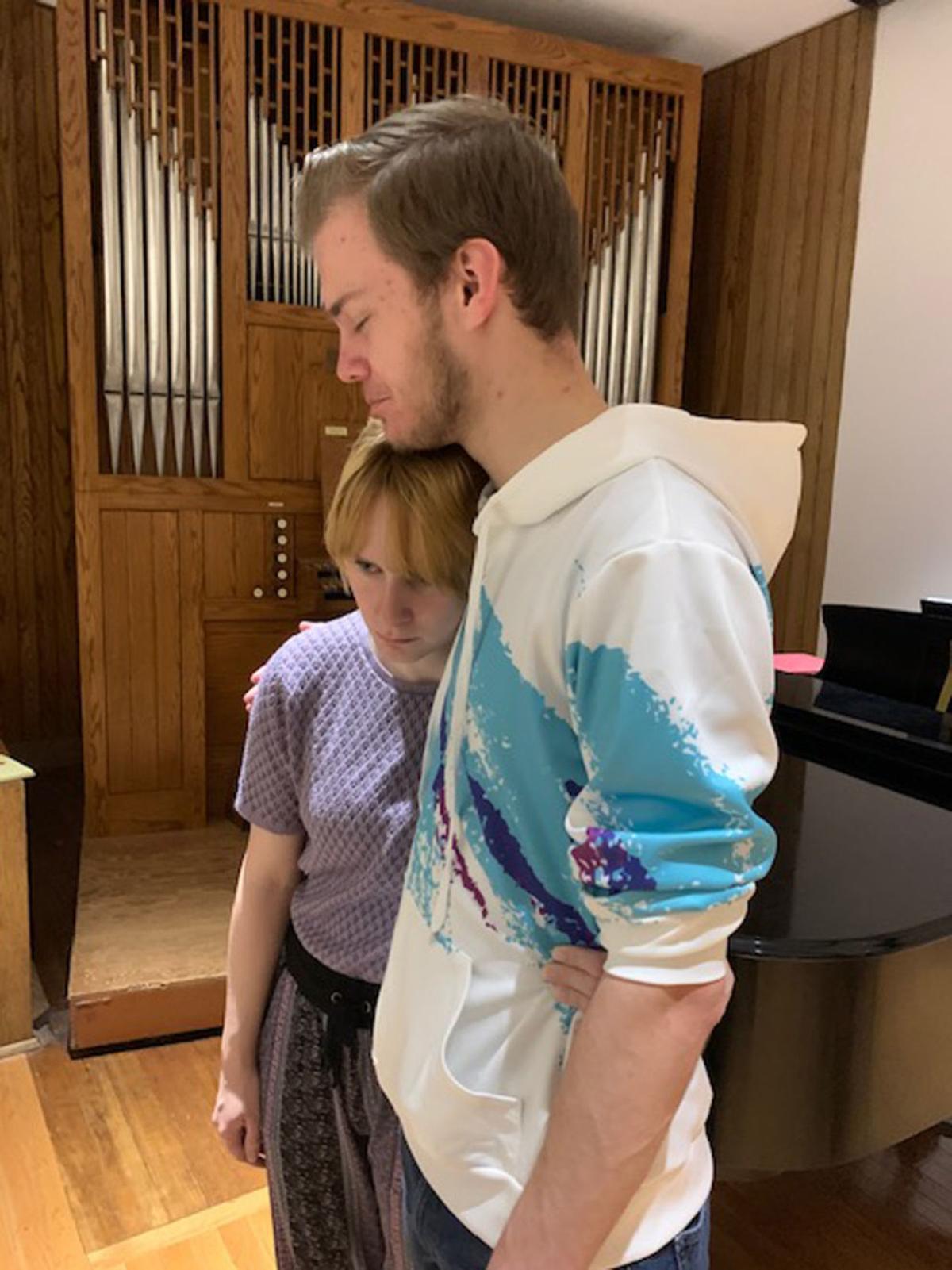 Faith Albright, left, and Bennett Shebesta, who play the brother and sister in the opera, share a poignant moment (though most of the opera is quite funny). 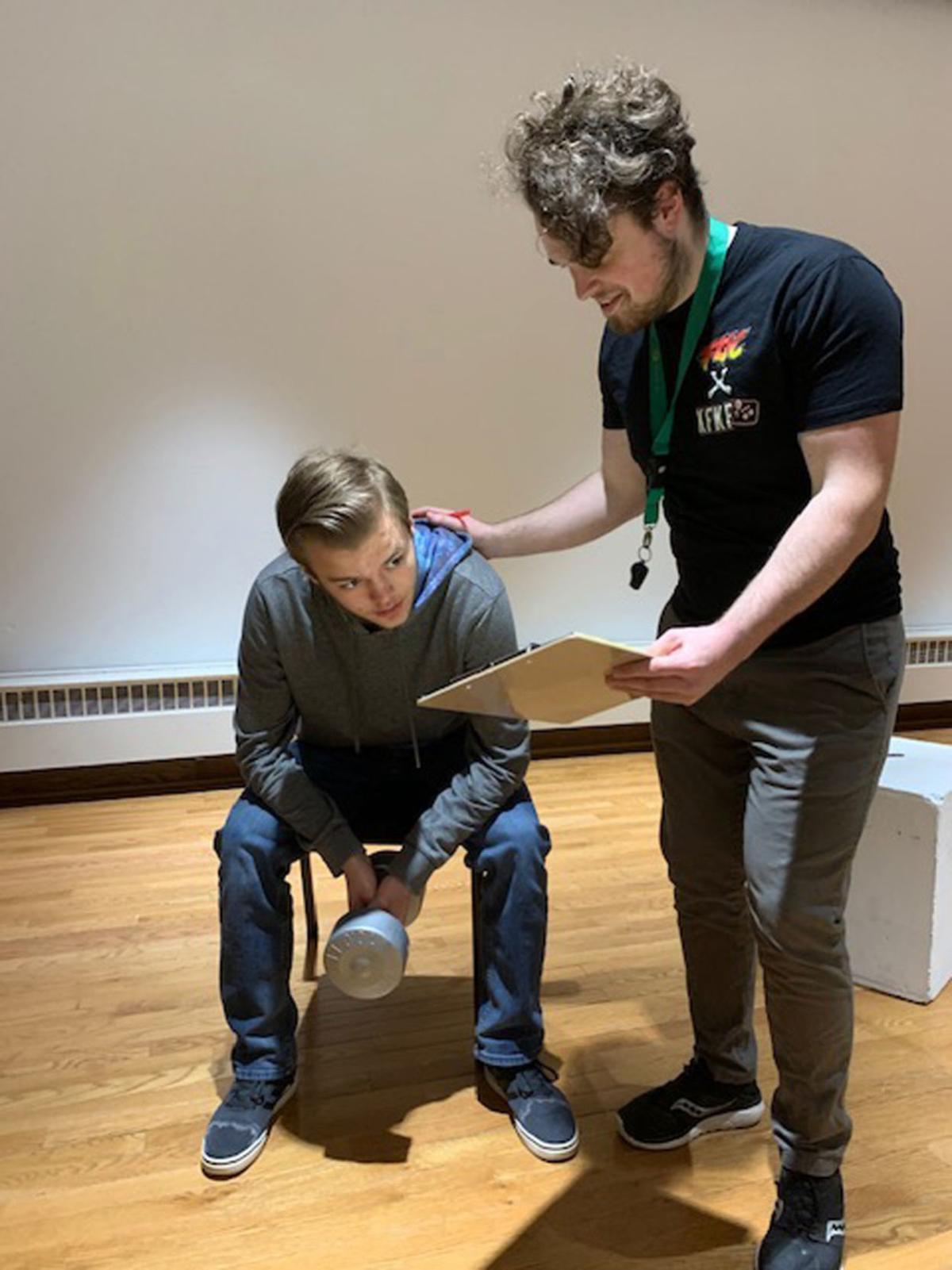 Bennett Shebesta, left, and Cory Pollard appear in a scene from the opera.

When it comes to writing operas, Greg Berg is a grizzled veteran.

Which is to say, he’s about to premiere his second original opera: “Birds of a Feather: A Magic Flute Sequel.”

Four years ago, Berg — a Carthage music professor who teaches the college’s January Opera Workshop class — wrote the music for “Black September,” which he composed with librettist Matt Boresi.

For “Birds,” he doubled his workload, penning the music and the libretto (the words to the opera).

It’s no surprise Berg said this project “was much harder. Constructing an opera libretto is a little bit like writing a play, which is hard enough, But beyond that, the story you’re telling needs to be an effective vehicle for your singers.”

Berg started thinking about the basic storyline in mid-December but didn’t write any words or music until Jan. 12. And he finished it on Jan. 17.

The opera runs about 20 minutes or, as Berg says with a laugh, “It’s not Wagner’s ‘Ring Cycle.’”

“Birds of a Feather” is a sequel of sorts to Mozart’s “The Magic Flute” and focuses on the characters of Papageno and Papagena “who find each other at the very end of Mozart’s opera,” Berg said. The two, he said, “fall in love instantly, but you’re left to wonder if they managed to live happily ever after.”

In this tale, the two have raised several children with stereotypical expectations about what boys and girls are supposed to do. It has worked well with their previous children, Berg said, “but their youngest son and daughter have very different interests that don’t mesh with their parents’ expectations.”

The direct inspiration for this opera “was a talented Carthage student named Ray Watson,” Berg said. Watson had participated in two opera workshops.

“Sadly, Ray was killed in an accident in mid-December,” he said, “and what was especially sad about it was that Ray had come to a new understanding of who he was and was the happiest we had ever seen him. His journey of self-journey and affirmation is what inspired the story of this opera.”

Berg added that the opera “is not meant to be a deep, thorough, sophisticated exploration of gender identity issues, but rather a simpler, gentler reflection on how hard it is to try and live your life according to the expectations of others and how important it is for us to allow people to be who they really are instead of who we would like them to be.”

The rest of Sunday’s program is called “A Celebration of American Opera.” All the pieces are in English, which he said makes it “accessible both for our singers as well as for the audience.”

Berg said he’s especially excited about “the very first piece on the program, a trio from an American ballad opera that had its first performance back in 1808. ‘The Indian Princess’ by John Bray was basically the first time that the story of Pocahontas was depicted on stage. We’re also doing a fun duet from an opera by none other than John Philip Sousa.”

The stage director for the production is Allison Hull, an adjunct voice instructor at Carthage and a highly regarded professional singer in Milwaukee, Berg said.

Hull said working on the new opera “has been such a treat. ‘Birds of a Feather’ has a contemporary sound yet hides little Easter eggs of ‘Magic Flute’ in the score, paying homage to Mozart but finding its own personality. This idea of finding one’s own voice is central to ‘Birds.’ One of the loveliest moments is between the two children, each exploring activities that bring them joy and singing ‘It feels so wonderful to be free, to be me!’”

This week’s edition includes stories on “Little Shop of Horrors” coming to the Rhode, a new opera premiering at Carthage College, upcoming loc…

Katrina Seabright, left, and Cory Pollard play the Papagena and Papageno (the mom and dad) in the opera.

Faith Albright, left, and Bennett Shebesta, who play the brother and sister in the opera, share a poignant moment (though most of the opera is quite funny).

Bennett Shebesta, left, and Cory Pollard appear in a scene from the opera.