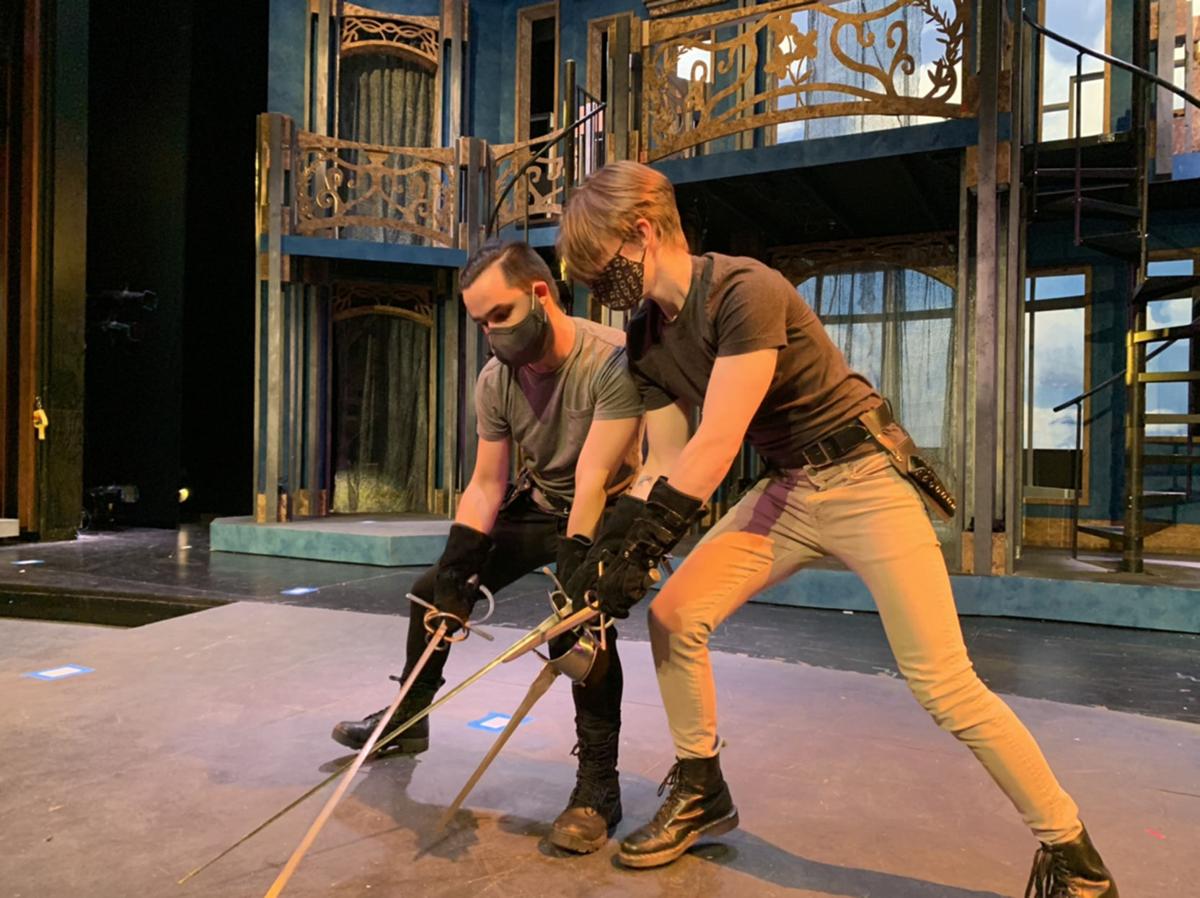 Alexander Gray as Tybalt, left, crosses swords with Aaron Racas as Romeo in this scene from “Romeo and Juliet,” opening Oct. 8 at the University of Wisconsin-Parkside. Because of COVID-19 restrictions, audience members can view the show remotely through a live stream and not in the theater. 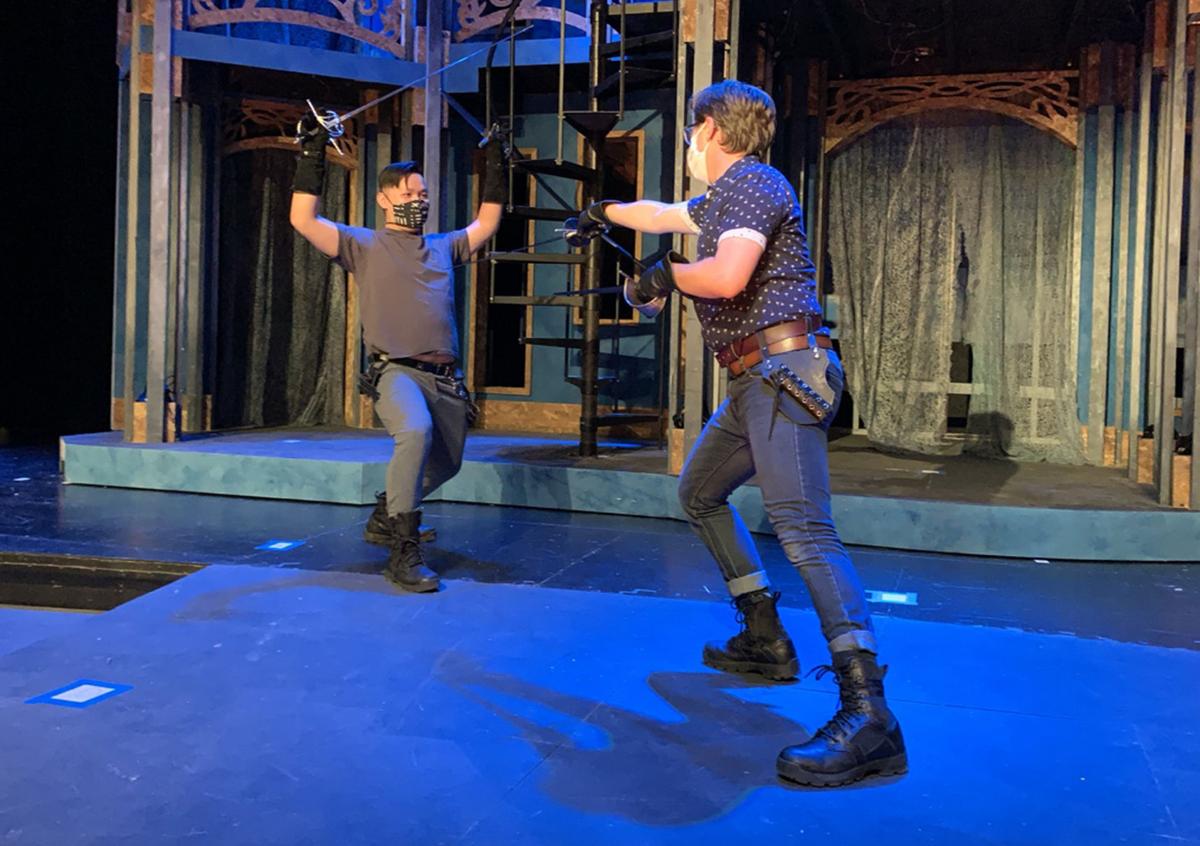 King Hang as Benvolio, left, battles with Ben Compton as Mercutio in this scene from “Romeo and Juliet,” opening Oct. 8 at the University of Wisconsin-Parkside. Audience members can view the show through a live stream. 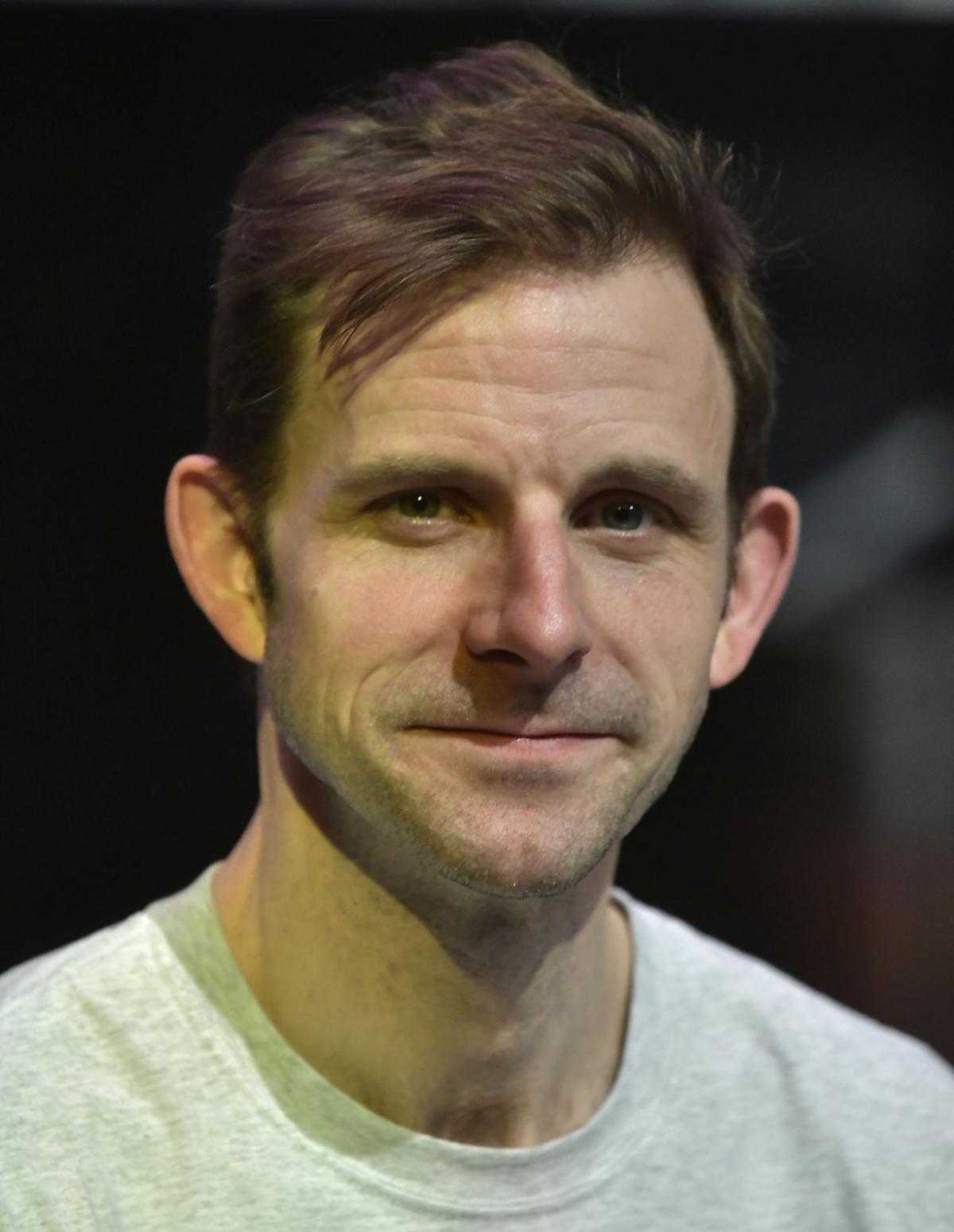 "Right here, my love, behind this face mask."

That's not exactly how the famous balcony scene unfolds in William Shakespeare's “Romeo and Juliet,” but COVID-19 restrictions require adjustments in live theater.

That holds true at the University of Wisconsin-Parkside, where Shakespeare's tragic romance opens Thursday.

Audience members, however, will only be able to view the show via live streaming.

The actors, too, are performing under COVID rules.

"We were shut down the night before our technical rehearsals were set to begin," said director Brian Gill. "My first task, once we were greenlighted to continue working on the show, was to have the cast and crew mask and glove up and work their way through the old staging so that I could assess what needed to be adjusted."

Any moments where student actors "were very close to each other" needed to be addressed, he said.

"If the students were comfortable, those moments remained or were slightly adjusted. If they were not comfortable, then the old staging was scrapped. Fortunately, we have been given specific guidelines and protocols from the College of Arts and Humanities that provide a clear framework of what we could and could not do."

The student actors, he said, "are masked throughout the play, and we make no apologies for that choice — artistically, I mean. It is the reality that we are all currently living, so we are treating it almost as an act of defiance. COVID-19 will not permanently close the theaters. Plague didn't during Shakespeare's time, and it won't during ours. The theater will always adapt, push back and survive."

The staging of the show itself, he said, has not been altered due to live streaming.

"I made the decision very early on that I was not interested in adapting our work for the screen," Gill said. "I wanted to bring our work to the audience as they would have seen it if they were able to enter our theater. What audiences will be seeing is a filmed production of the play as it is performed in a theater."

One of the challenges of performing "Romeo and Juliet" is that audience members feel they already know the story.

When asked how he brings something fresh to a familiar story, Gill — a working actor who has extensive experience with the Bard's works, including at Chicago Shakespeare Theater, the Goodman Theater and Shakespeare's Globe Theater — said, "I simply do not believe in producing boring Shakespeare and find ways to help actors engage in the language in such a way that it is as accessible as possible."

"'Romeo and Juliet' also benefits from being a comedy for the first half of the play, with multiple opportunities for silliness," he said. "It isn't until the second act where it turns into a tragedy."

Also helping keep the show fresh are the action scenes.

"There are a great number of sword fights throughout the play, which, if done well, can be very exciting for the audience," Gill said.

The show's fight director, Christopher Elst, "is a certified teacher with the Society of American Fight Directors, so we have some phenomenal fights."

Helping college students relate to a story written in in 1595 — centuries before texting, Tinder and even the telephone! — isn't difficult, Gill said.

"This play has so much in it that the student actors can completely relate to. The restlessness of youth, the strength of love, the perils of lust, not being heard, the dangers of impetuosity — and, most importantly, the fragility of life. That is something we are all painfully aware of at this moment in time, 400-some-odd years after this play was written.

"In fact," he added, "it is an outbreak of the plague that prevents Friar Lawrence's crucial letter from arriving into Romeo's hands. Very relevant."

Gill has been a theater professor at UW-Parkside since 2011 and a working actor for more than 30 years, but he had never performed in or directed "Romeo and Juliet" before this production. He also adapted the script.

"In adapting the script," he said, "I tried to follow the formula that worked so well for us with 'Love's Labour's Lost' (a May 2019 UW-Parkside show). I streamlined the play a great deal. If I could show the audience in action things that Shakespeare used language and exposition to convey, then I would."

In a twist, he is "beginning the play at the end, with the discovery of the lovers in the crypt by Friar Lawrence. We then get to find out what exactly happened to bring us to such a tragic ending. A story told in flashback, if you will."

The show goes on!

At a time when professional theaters remain closed, Gill is thrilled to be performing a show — even without an audience present.

"I feel incredibly fortunate," he said. "Our COVID-19 protocols, combined with our incredibly responsible students, have provided a safe environment for us to be able to perform this play and to livestream it to an audience.

"As a professional actor myself, I am keenly aware of the amount of work that has been lost and the truly dire situation that theaters — and the arts overall — are currently in. At some point, this will, of course, all be behind us, but it is very difficult, nonetheless."

What: “Romeo and Juliet,” adapted and directed by Brian Gill

Where: Live streamed from the UW-Parkside Main Stage Theatre

About the show: In the streets of Verona, violence reigns. An age-old vendetta between two noble houses reignites. When two star-crossed lovers turn their backs on their parents’ intolerance to seek their own way, they are thrown into a world of extremes where everyone has chosen sides and no one is willing to budge.

How to watch: Go to www.uwp.edu/therita/theatreperformances.cfm and scroll down through the fall semester shows. Each show has a “request ticket” square at the bottom of the show description. Clicking on that box brings you to a page where you can receive “virtual tickets” to the show’s live stream.

Cost: Virtual tickets are free and must be requested. Requests will be granted in the order they are received until the maximum number of virtual guests has been reached. You will receive a confirmation that your request has been received. A link to the performance will be delivered before the performance.

Note: Use the online ticket form to request individual tickets for performances. One link will be provided for each performance date selected. Platforms for display will vary by production. Do not request a ticket unless you know you will be using it. Otherwise, you may be preventing a fellow patron from enjoying the performance.

Halloween events carry on under COVID

As much as leaves turning colors and apple cider doughnuts being declared a “fruit serving” on your diet, the UW-Parkside Foreign Film Series …

With less than a week to go before Election Day, “The Campaigns That Made History” (8 p.m., History) asks viewers to look back at a half-centu…

A decade and a half after “Everybody Loves Raymond” aired its last original episode, cast members Ray Romano, Patricia Heaton, Brad Garrett an…

Wisconsin brewery and distributor team up to benefit organization that promotes women in brewing.

It's the 100th anniversary of prolific mystery writer Agatha Christie’s first novel, “The Mysterious Affair at Styles.” Here’s why we still love her.

Alexander Gray as Tybalt, left, crosses swords with Aaron Racas as Romeo in this scene from “Romeo and Juliet,” opening Oct. 8 at the University of Wisconsin-Parkside. Because of COVID-19 restrictions, audience members can view the show remotely through a live stream and not in the theater.

King Hang as Benvolio, left, battles with Ben Compton as Mercutio in this scene from “Romeo and Juliet,” opening Oct. 8 at the University of Wisconsin-Parkside. Audience members can view the show through a live stream.