It was Regina King, winning her fourth career Emmy on Sunday, who perhaps summed up the proceedings the most succinctly — and accurately: "This is freaking weird."

Why, yes, being handed your Emmy inside your home, by a person you didn't know was coming, with fellow nominees zooming in from their own homes, while host Jimmy Kimmel played to a house of empty seats and cardboard cutouts — well, it WAS weird as heck.

But the "Pandemmys," as host Kimmel called this strangest of award shows, also worked pretty darned well at times — when Kimmel and Jennifer Aniston weren't coming close to accidentally burning down the Staples Center with an overly zealous attempt to disinfect a winner's envelope with real flames (yes, a coronavirus joke).

Some key moments of an unforgettably unusual night:

WE'LL HAVE WHAT THEY'RE HAVING

Whatever flames were actually burning onstage, the real fire was happening up in Toronto, where the gathered cast and creators of "Schitt's Creek" were having an incredible night. The first award of the evening, best actress in a comedy, went to the gifted veteran Catherine O'Hara, and then they kept winning, the Canadian crowd becoming increasingly giddy as it became clear this little show about a wealthy family down on its luck was sweeping the comedy awards. Nobody was more thrilled than Daniel Levy, son of best actor winner Eugene Levy; the younger Levy won the award for comedy writing, shared a directing award and captured the supporting actor trophy. "The internet is about to turn on me. I'm so sorry," Levy said.

A CALL TO THE BOOTH

Levy used some of his considerable mic time to urge viewers to vote in November. Noting that his show was "at its core about the transformational effects of love and acceptance," he urged people to "go out and vote because that is the only way that we are going to have love and acceptance out there." Of course, he wasn't the only one: King, when she won for HBO's "Watchmen," reminded watchers: "Have a voting plan, go to ballotpedia.com, vote up the ballot, please. Also stressing the importance of the vote: Mark Ruffalo, a winner for "I Know This Much Is True."

It was a solution born of necessity, having winners give their acceptance speeches (mostly) from home. But there was something gratifying about watching people in their own living rooms, surrounded by people they loved, as awkward or messy as it sometimes was. Ruffalo, for example, when he spoke of the "big, important moment ahead of us" as a country, was cheered with smiles, tears and pumped fists by his wife, Sunny, surely one of the most supportive spouses in Emmy history. At one point, we gotta say, we just stopped watching Ruffalo and focused on his wife. On Twitter, there was at least one call for her to win best supporting actress.

Uzo Aduba, winning her Emmy for playing Shirley Chisholm in "Mrs. America," knew what she had to say first: "Mom, I won!" Her mother, it turns out, was downstairs, and according to Aduba, a bit confused as to how things were working. "She was not fully grasping," Aduba said later. "'What do you mean the Emmys are going to be in the house? Are people coming here?' She was downstairs and so excited and so proud." The cutest part was when Aduba ended her speech, turned away from us and promptly called out: "Mommy!"

Yet another heartwarming homemade moment came when Zendaya, at 24, became the youngest winner of best actress in a drama, for playing a troubled teen in "Euphoria." Surrounded by a large group of cheering family and friends, there was indeed unbridled euphoria in the room. "I know this seems like a really weird time to be celebrating," Zendaya said. "But I just want to say there is hope in the young people out there. I know our TV show doesn't always feel like a great example of that."

There were no fashion rules on a night when some people seemed to be dressed way down and others way up (we saw you, Billy Porter). Both King and Aduba used that freedom to highlight an important moment in the struggle for social justice, wearing T-shirts referring to Breonna Taylor, the 26-year-old EMT from Louisville, Kentucky, who was shot and killed by police in March. "The cops still haven't been held accountable," King said in a Zoom session with journalists. "She represents just decades, hundreds of years of violence against Black bodies. Wearing Breonna's likeness and representing her and her family and the stories that we were exploring, presenting and holding a mirror up to on 'Watchmen,' it felt appropriate to represent with Breonna Taylor." Aduba wore a black T-shirt with Taylor's name in gold. Sterling K. Brown gave out the show's final award, best drama, in a Black Lives Matter shirt.

Winners usually thank their spouses, their kids, their parents, and their agents — their therapists, not so much. Which was why it was quite moving to hear Cord Jefferson, who won for writing on "Watchmen," thank his own therapist, whom he identified only as Ian. "I am a different man than I was two years ago," he said. "I love you, you have changed my life in many ways." He added: "Therapy should be free in this country."

We already mentioned her once here, but she's so darned good, she gets an item all her own. When O'Hara won her best actress award for "Schitt's Creek," she made a reference to how difficult it is for a woman her age — she is 66, as is her character — to get juicy roles like she did on this show. "I will forever be grateful to Eugene and Daniel Levy," she said, "for the opportunity to play a woman of a certain age, my age, who gets to fully be her ridiculous self." Her fans are thankful she had six seasons of being fully ridiculous, and look forward to future, uh, ridiculousness.

Photos: Check out scenes from the 2020 Emmy Awards

Get the latest information on hit TV shows and more with our weekly newsletter!

Instead of airing on broadcast TV, "It's the Great Pumpkin, Charlie Brown" and other "Peanuts" classics will be streaming on Apple TV+, reports say.

After just six months, short-video app Quibi is shutting down. Twitter reaction to its demise was swift; see some of the comments here.

You May Think You Know 'Rebecca,' But Netflix's Adaptation Proves You Don't

Plus, 'The Goldbergs' spoof 'Airplane!' in their Season 8 premiere.

What's Coming and Going From Netflix in November 2020

'The Crown,' 'Virgin River,' 'Dolly Parton's Christmas on the Square' and more will arrive this month.

Stars Sonequa Martin-Green and Doug Jones share their excitement about returning to the set on November 2.

Worth Watching: 'Borat,' Springsteen's 'Letter to You,' Bill Murray 'On the Rocks,' 'Queen's Gambit'

And don't miss a new episode of 'Shark Tank' on ABC.

And don't miss 'Transplant' on NBC.

'Star Trek: Discovery': What Happened to the Ship & Crew in the Future? (RECAP)

What happens after that rough landing, and the crew emerges from the wormhole.

After a fun night, Kaley Cuoco's Cassie wakes up finds a passenger dead in the bed. 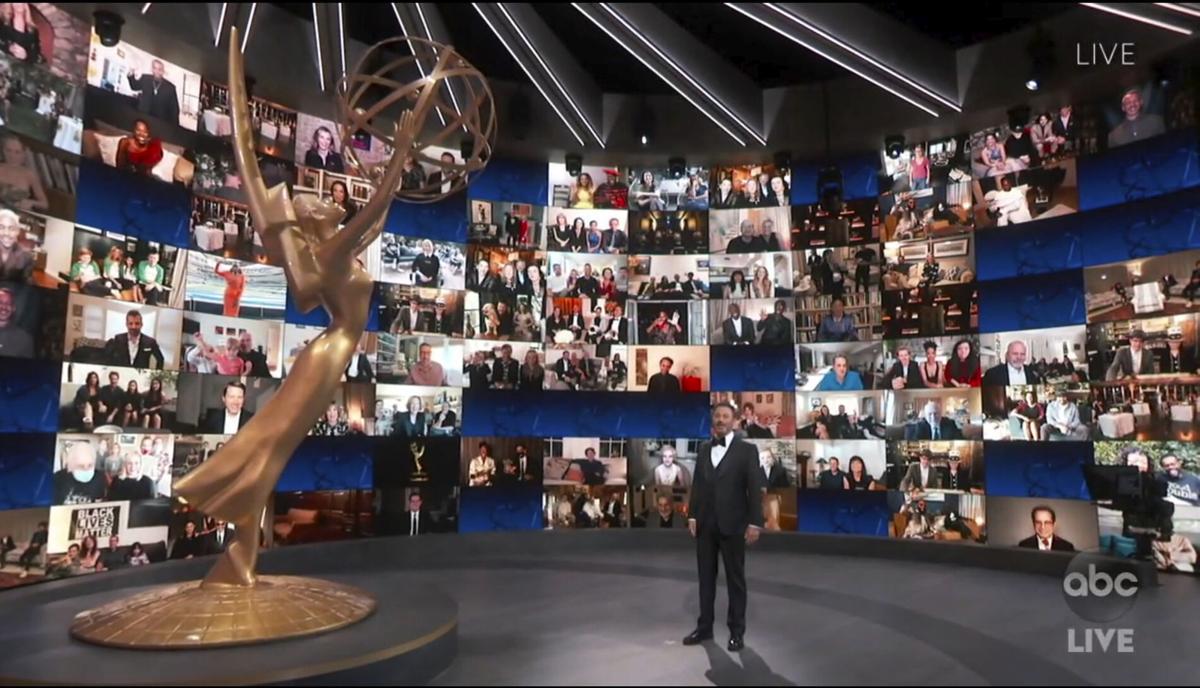 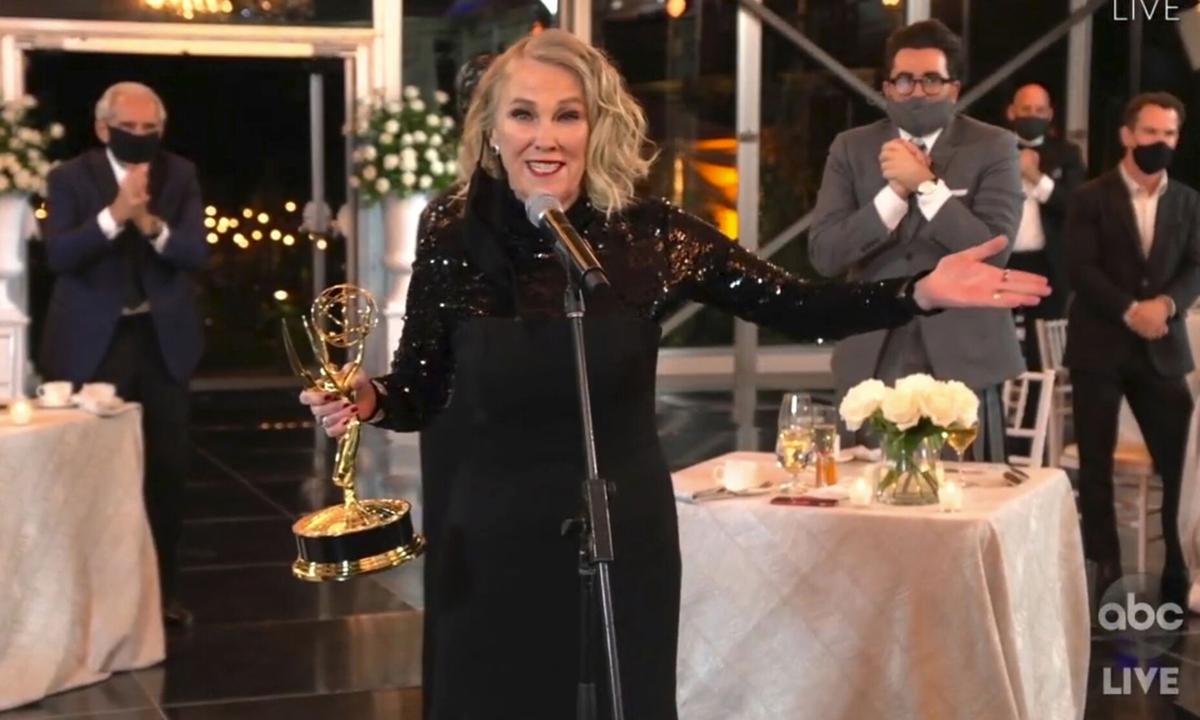 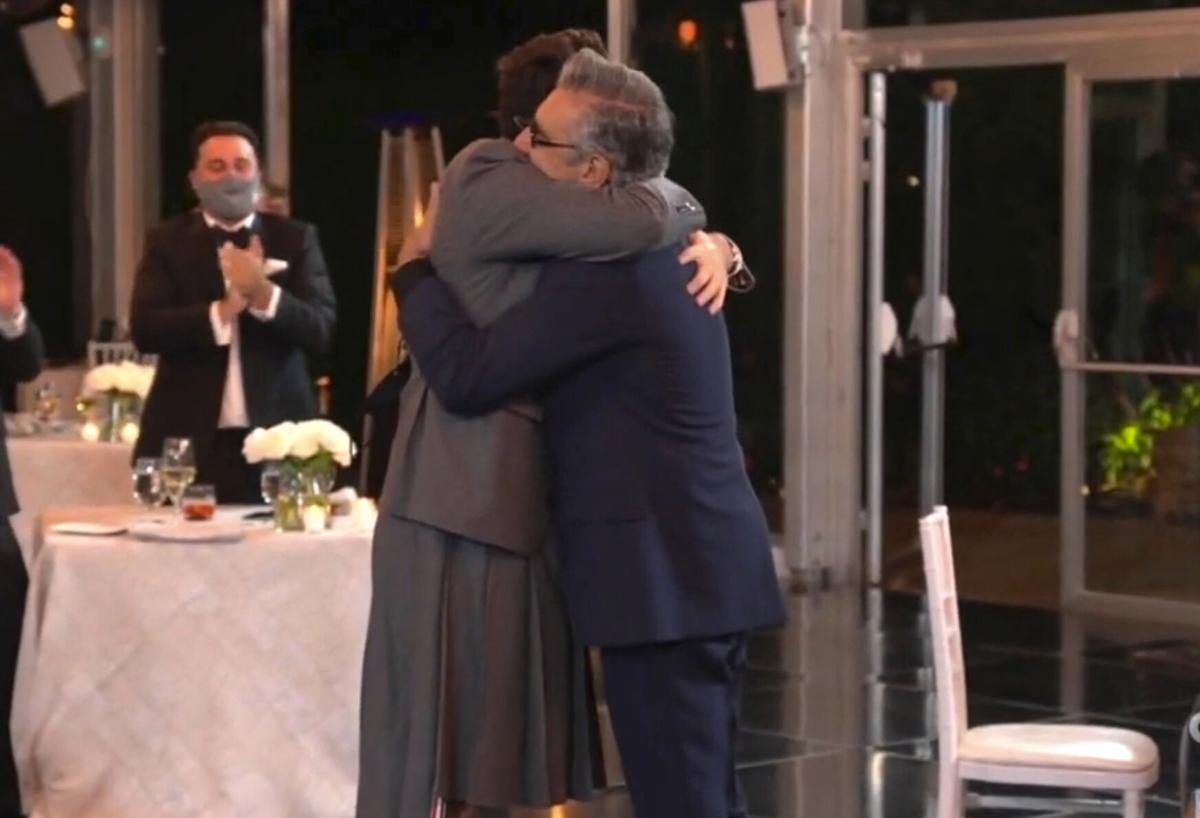 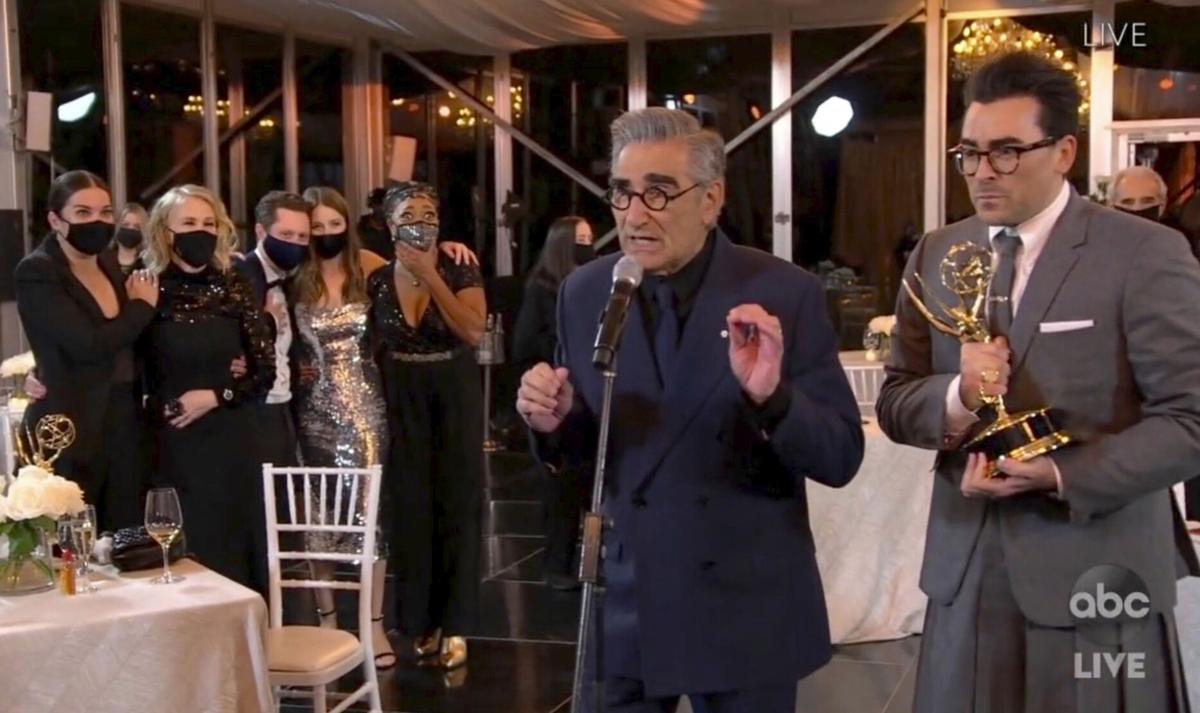 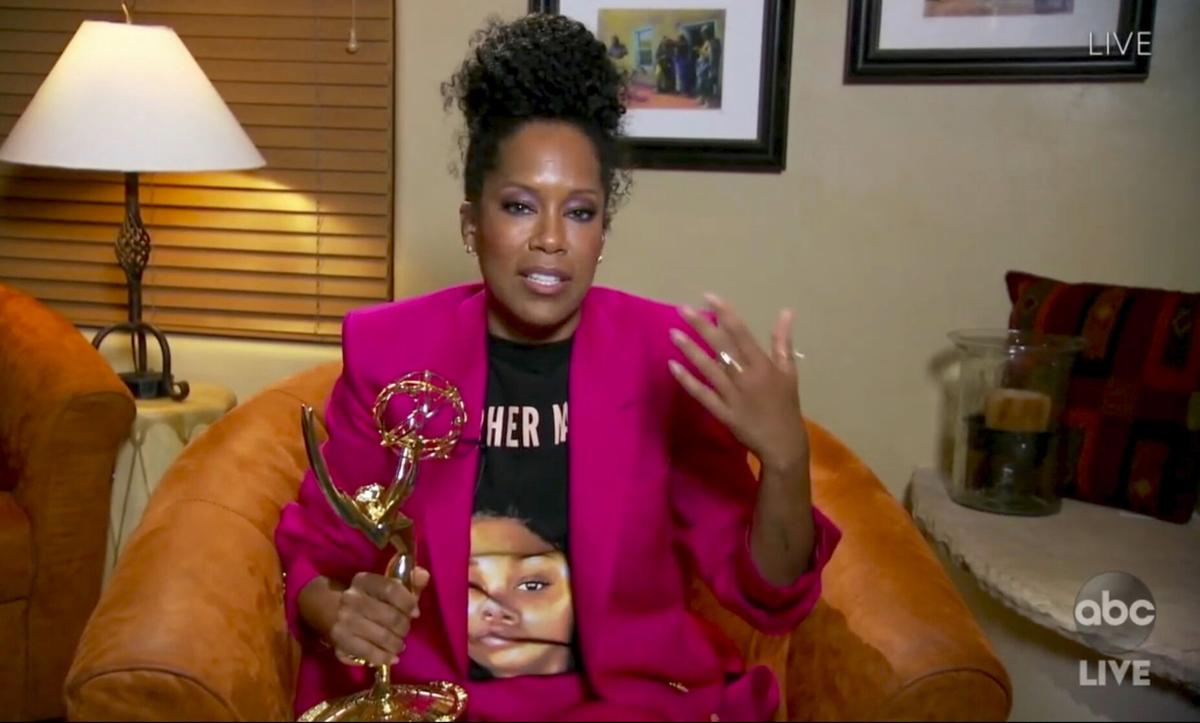 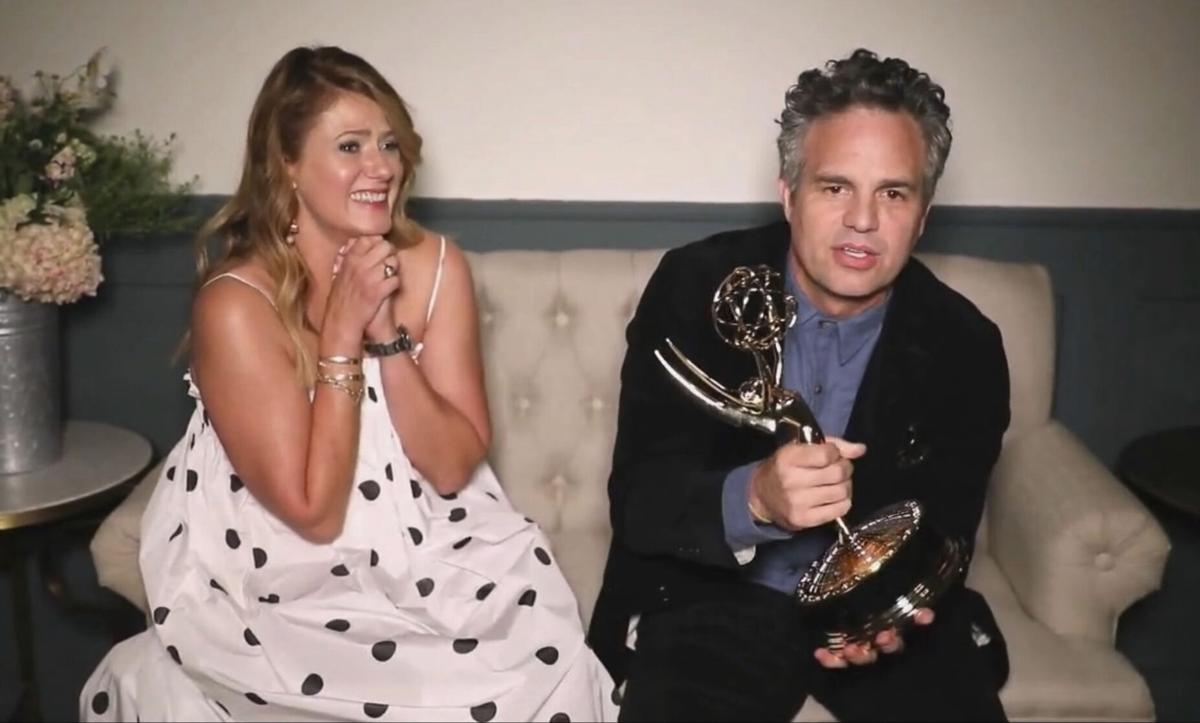 In this video grab captured on Sept. 20, 2020, courtesy of the Academy of Television Arts & Sciences and ABC Entertainment, Mark Ruffalo accepts the award for outstanding lead actor in a limited series or movie for "I Know this Much is True" during the 72nd Emmy Awards broadcast. Looking on at left is Ruffalo's wife Sunrise Coigney. (The Television Academy and ABC Entertainment via AP) 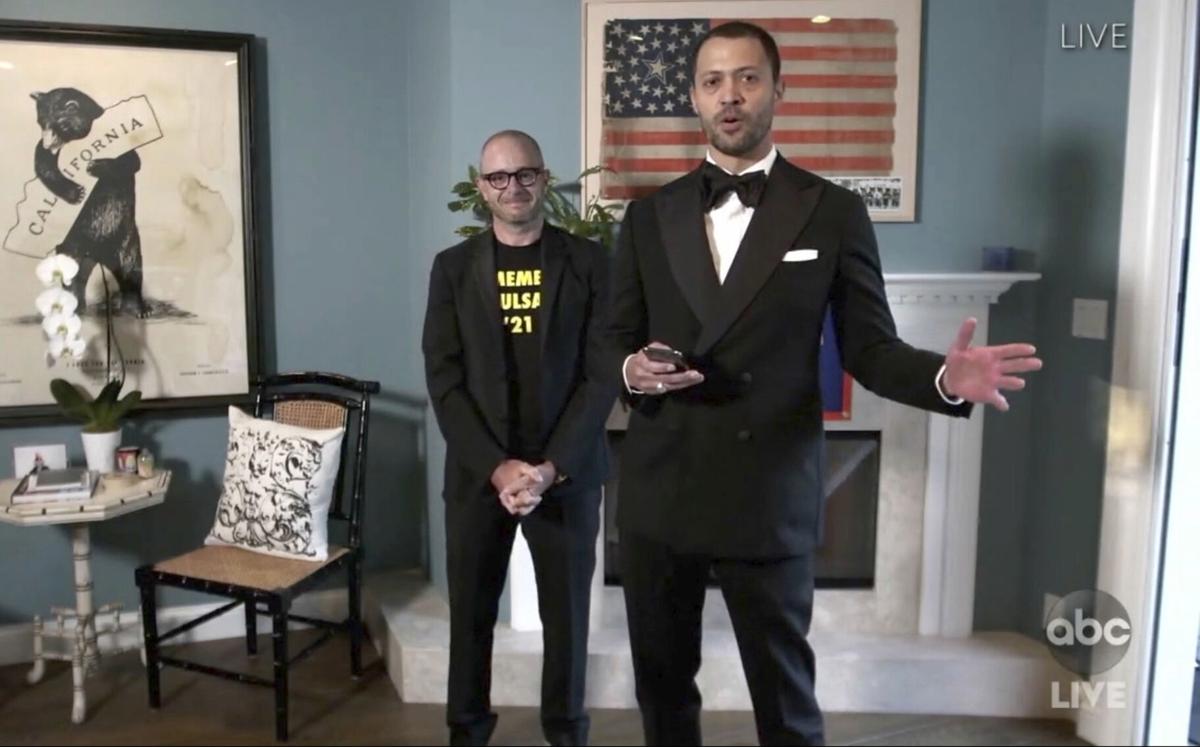 In this video grab captured on Sept. 20, 2020, courtesy of the Academy of Television Arts & Sciences and ABC Entertainment, Damon Lindelof, left, and Cord Jefferson accept the award for outstanding writing for a limited series, movie or dramatic special for "Watchmen" for "This Extraordinary Being" during the 72nd Emmy Awards broadcast. (The Television Academy and ABC Entertainment via AP) 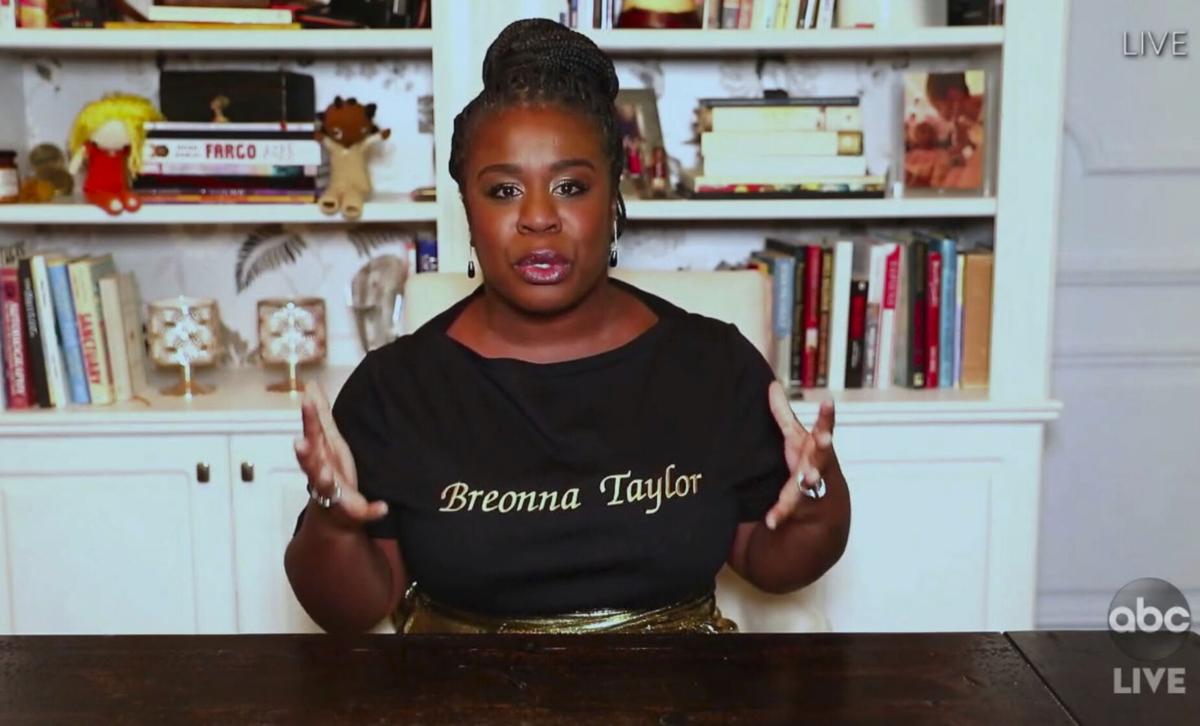 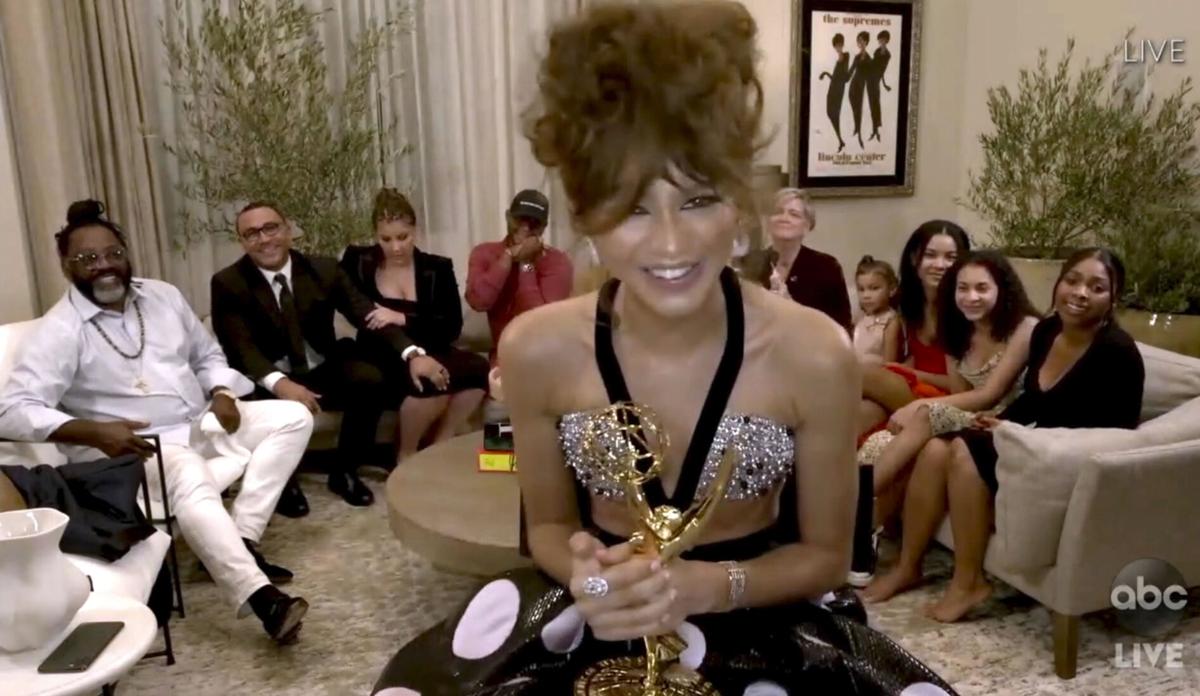