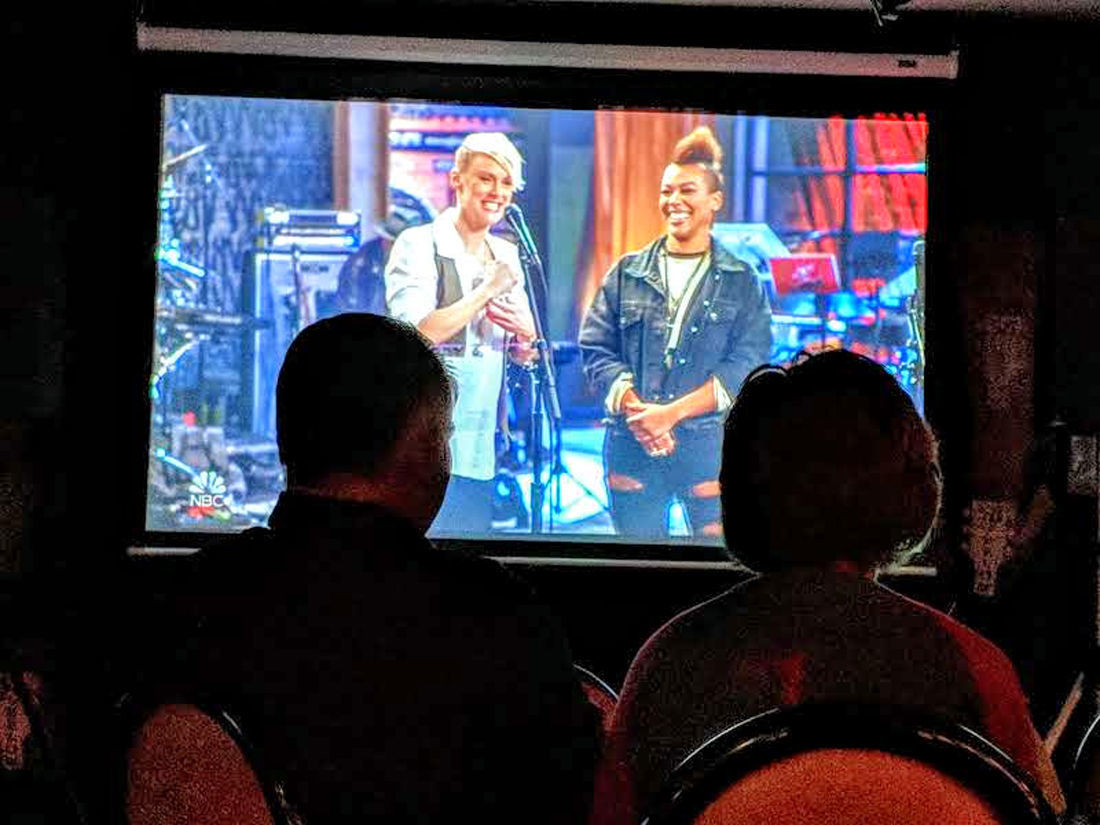 Fans at 58 Below watch Betsy Ade, left, perform with Lisa Ramey on “The Voice” in April. Saturday, the downtown Kenosha venue celebrates its second anniversary with live music starting at 12:30 p.m. 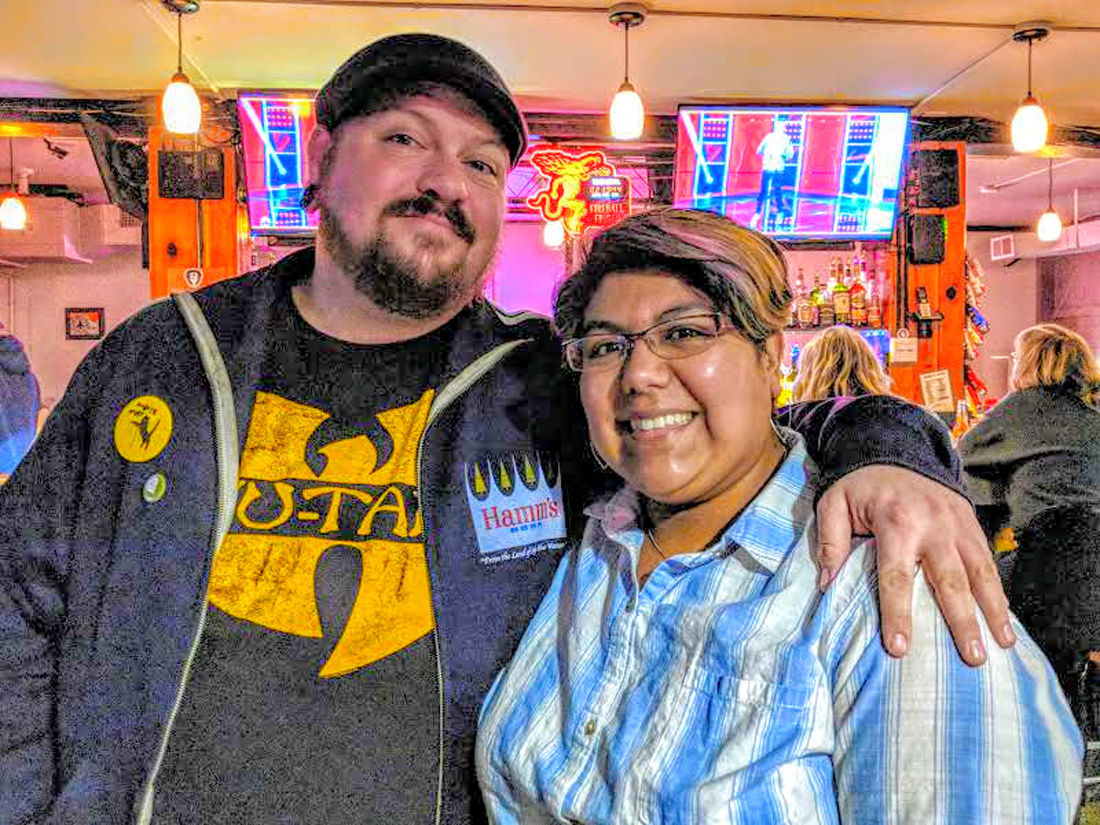 Pete Pedicone and Veronica Chairez cheer for their friend Betsy Ade at 58 Below in downtown Kenosha. 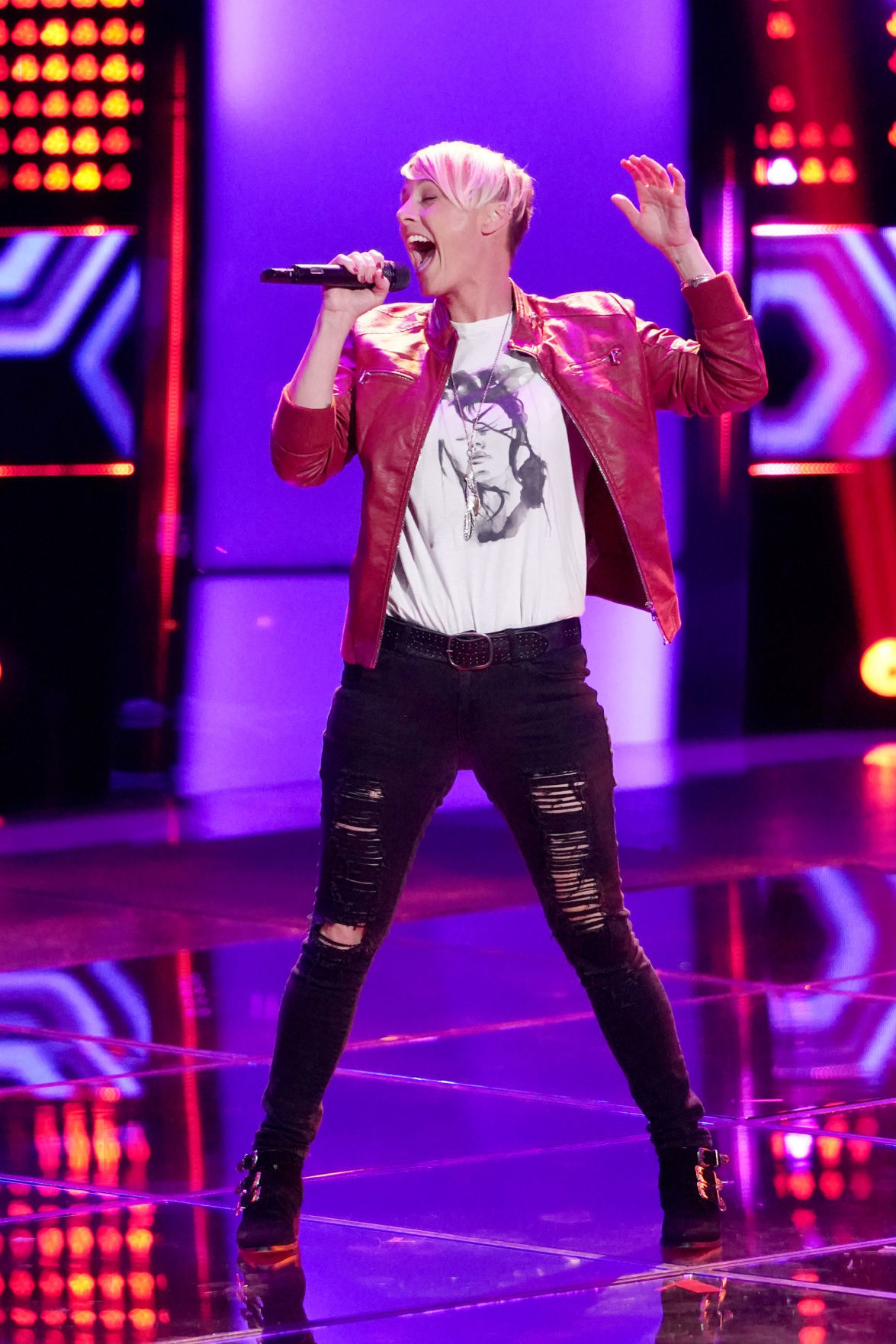 Betsy Ade, seen singing on NBC’s “The Voice” in March, is performing on July 17 with her band Well-Known Strangers as part of this summer’s Lincoln Park Live free concert series.

The show is in the “battle rounds” phase, where two singers from each judge’s handpicked team perform together.

At the end of the song, the judge — in this case, John Legend — selects one singer to remain on the team.

Here’s what happened Monday on the show: Ade, 40, a substitute teacher for Kenosha Unified School District and the lead singer for the band Well-Known Strangers, came out on stage to perform with fellow Team Legend member Lisa Ramey.

As Ade and Ramey rehearsed for the “battle,” Legend said of the two, “They are both fierce ladies with an ‘I Am Woman, Hear Me Roar’ energy.”

They worked with R&B singer Khalid to prepare, singing the Brandi Carlisle song “The Joke.”

Carlisle said she wrote the song “for everyone who feels they are under-represented, unloved or illegal in society.”

On the show, Ade said she can relate to feeling that way as a child and read a letter from her son, Talynn, offering her support.

“My son inspires me,” she told Khalid.

For his part, Khalid said, “It’s tough they are paired together” because Ade and Ramey have similar voices and styles.

After their performance came the judges’ comments.

Kelly Clarkson: “It’s a blessing to watch both of you be so comfortable on stage.”

Blake Shelton: “That moment couldn’t have been more magical.”

Adam Levine: “I was so into both of you ... this is a tough decision.”

Legend: “Both of you deserve to be on this stage. I hate to break up this duo.”

After Legend picked Ramey to remain on his team, the local crowd groaned and immediately called for a “steal.” (After the vocal face-off, each coach must choose which artist from their team is the strongest. The coaches also have the option of stealing losing artists from an opposing coach. Each coach has two steals.)

Ironically, Ade had decided before her “Voice” audition that she wanted to be on Clarkson’s team; however, Clarkson didn’t choose Ade during the blind auditions.

Thanks to Clarkson using her final steal to nab Ade, she will proceed to the next round, all in the hopes of being named the next “Voice” champion.

A good fit for Ade

Veronica Chairez believes Ade can “go all the way on Kelly’s team. That’s a better place for her because no one else on that team has a voice like hers.”

Ade herself was at 58 Below, along with her family and band members and a huge crowd, to watch her first appearance on “The Voice” last month. Now, the downtown venue hosts viewing parties whenever “The Voice” is on — even if they have to cancel Monday night trivia to do it.

“I think she’s got a great chance to win,” said Pete Pedicone. “She’s got an amazing voice and an incredible stage presence.”

His brother, Dominic Pedicone, is a member of 89 Mojo and is a co-owner of 58 Below with Jody and Kevin McCarron and Michelle Hansen.

And in case you wondered, they are all on Team Betsy.

“When ‘The Voice’ is on, we’re here, cheering her on,” Pete Pedicone said.

Fans at 58 Below watch Betsy Ade, left, perform with Lisa Ramey on “The Voice” in April. Saturday, the downtown Kenosha venue celebrates its second anniversary with live music starting at 12:30 p.m.

Pete Pedicone and Veronica Chairez cheer for their friend Betsy Ade at 58 Below in downtown Kenosha.

Betsy Ade, seen singing on NBC’s “The Voice” in March, is performing on July 17 with her band Well-Known Strangers as part of this summer’s Lincoln Park Live free concert series.