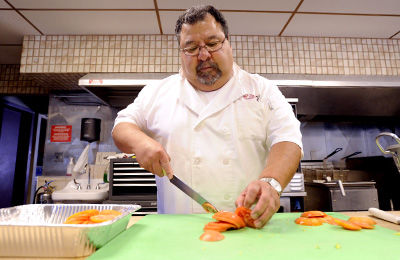 Chef David Perez slices tomatoes while preparing for an event for 200 people. Perez, of Kenosha, got into the business about 10 years ago after he lost his job as a machinist. 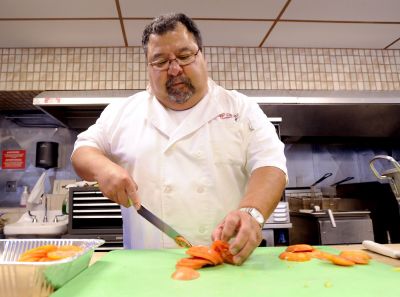 Chef David Perez slices tomatoes while preparing for an event for 200 people. 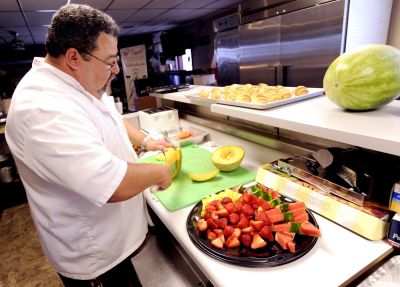 Chef David Perez prepares a fruit tray for an event. Perez, of Kenosha, got into the business about 10 years ago after he lost his job as a machinist. 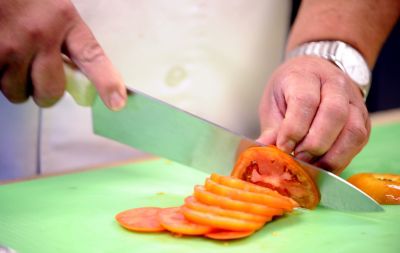 Chef David Perez slices tomatoes while preparing for an event for 200 people. Perez got into the catering business about 10 years ago, after he lost his job as a machinist. 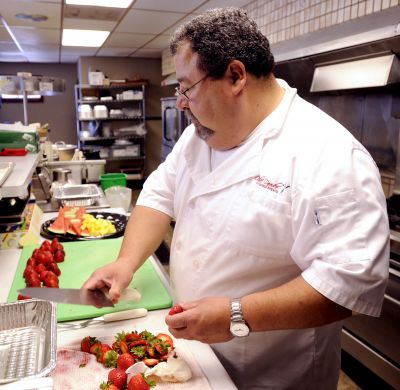 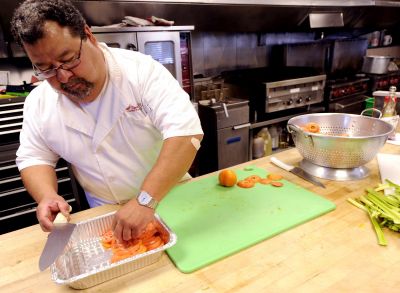 When David Perez lost his job as a machinist at Tri-Clover about 10 years ago, he didn’t sit down to dust off his resume and hunt for a new manufacturing job.

Job security in manufacturing looked grim at the time, Perez said, and after 25 years at Tri-Clover he wanted a change.

“I figured it was time to do something completely different and more challenging,” he said.

So, Perez started a catering business.

Using the severance money from Tri-Clover, Perez and his wife Kathy started a small catering business out of their home in Kenosha and in three years moved into the former Andy’s Restaurant at 2301 63rd St.

“We were looking for a larger space,” Perez said. When Andy’s became available, Perez and his wife bought the restaurant and kept it open while still running the catering service, then named Fiesta Catering.

Perez had hoped to move his catering business into the same building as Andy’s by expanding the building to make enough room to run the two businesses together.

But “the market suddenly changed,” he said. “I had architectural plans, I had approval from the city, but the economy took a huge turn for the worse.”

The plans were scrapped in late 2007, and Perez closed the restaurant. Perez and his wife then moved all of their catering equipment into the building, changed the sign and devoted their efforts to Fiesta.

“Catering is what I do best,” he said. “I really just wanted to do catering.”

For him, cooking is a passion rooted in the work he did as a child and teenager in the various restaurants and delicatessens his parents owned.

“From there I worked in different restaurants,” he said. “I started out washing dishes, then I became a prep cook and then I actually started working with other cooks and chefs.”

This was all before he started working as a machinist, and eventually at Tri-Clover.

But he never forgot about cooking.

The challenge to take his passion of cooking and turn it into a full-time job made the change even more appealing, he said, and after encouragement from his wife, the couple entered the catering business.

Slow growthAfter Perez gutted the restaurant and officially moved Fiesta into Andy’s, he hit a plateau — he was getting clients and catering events, but his business wasn’t growing.

So Perez contacted Mike Roman, a Chicago-based catering consultant to analyze his business.

Roman made a number of suggestions, most importantly that Perez branch out.

The foods served by Fiesta weren’t geared only towards the Hispanic demographic, Roman told Perez, and the name “Fiesta Catering” didn’t effectively advertise the range of Perez’s cooking to all demographics.

Perez then changed the name to Chef David’s Catered Events.

Roman also helped Perez hone his abilities to cater corporate lunches and events, which was the main area Perez wanted to serve when he started.

Now he’s cookin’Although Chef David’s is still a relatively small operation, employing three other chefs regularly as well as other servers and waiters on an as-needed basis, Perez caters roughly five events every week. The events range from corporate lunches for Jockey and local businesses as well as weddings, graduation parties and other celebrations.

Part of the reason for his recent success is the flexibility of the menu at Chef David’s, as well as the availability of the Perez who owns, manages and operates as the head chef.

“I’m there through the whole process,” Perez said, “I’m there in the preparation, the ordering of the food and the designing of the menu,” for individual events.

Despite the detailed menu listed on Chef David’s website, those who schedule events through the catering service are often served items that aren’t on the menu.

“The thing that makes us different from other catering services...(is that) we incorporate different things into our menus,” Perez said.

Chef David’s futurePerez doesn’t plan to move out of the former Andy’s or Kenosha anytime soon, he said, but he does hope to further expand Chef David’s.

The menu is already flexible, as Perez can make anything from homemade Italian sausage and other charcuterie to cheesecakes and chicken piccata or other specialty items, so he doesn’t see a need to officially expand his menu.

He admits he needs help on the management side of the business, though.

“I want to incorporate maybe a partner, or catering manager,” he said. I need “someone more into the front of the house aspect. It’s getting a bit overwhelming,” to handle all of the scheduling, hiring and management on top of the cooking.

Perez said there is one thing he won’t make for a customer, though.

“I don’t do deli trays,” he said, “leave that for the grocery stores.”

Chef David Perez slices tomatoes while preparing for an event for 200 people. Perez, of Kenosha, got into the business about 10 years ago after he lost his job as a machinist.

Chef David Perez slices tomatoes while preparing for an event for 200 people.

Chef David Perez prepares a fruit tray for an event. Perez, of Kenosha, got into the business about 10 years ago after he lost his job as a machinist.

Chef David Perez slices tomatoes while preparing for an event for 200 people. Perez got into the catering business about 10 years ago, after he lost his job as a machinist.