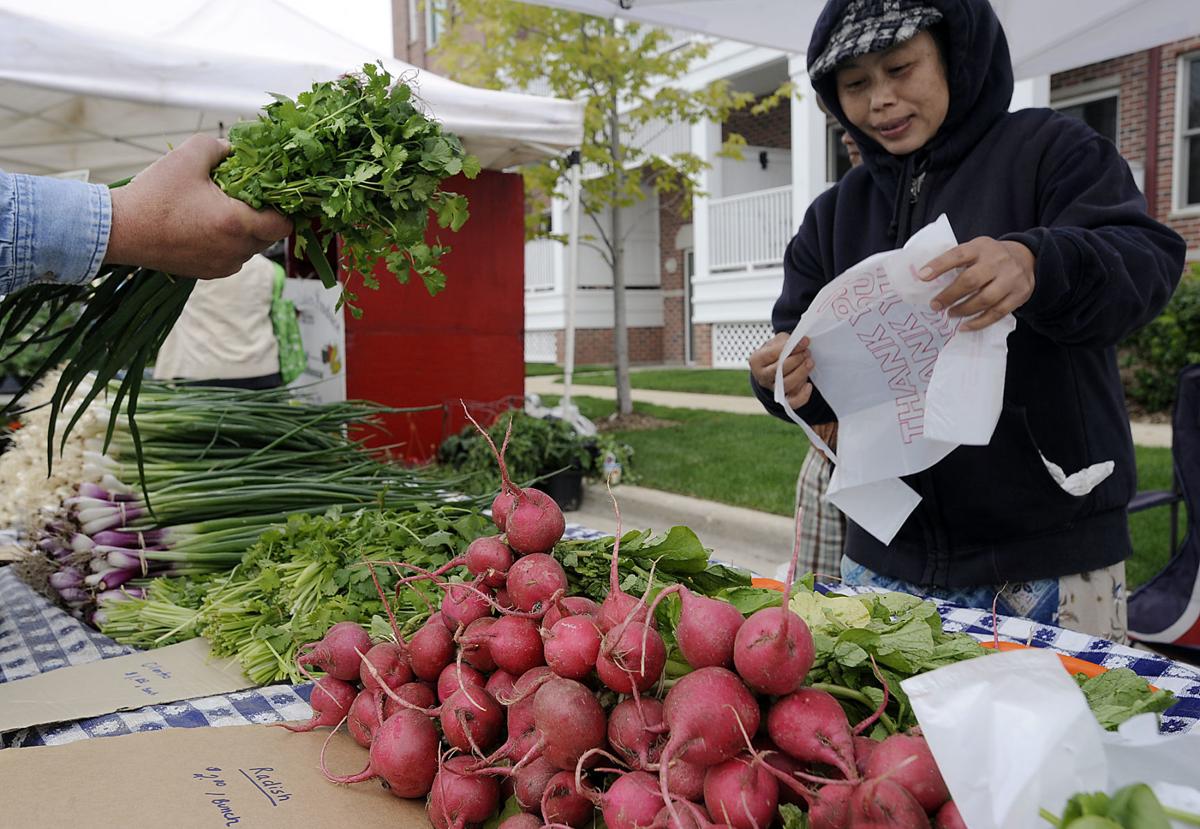 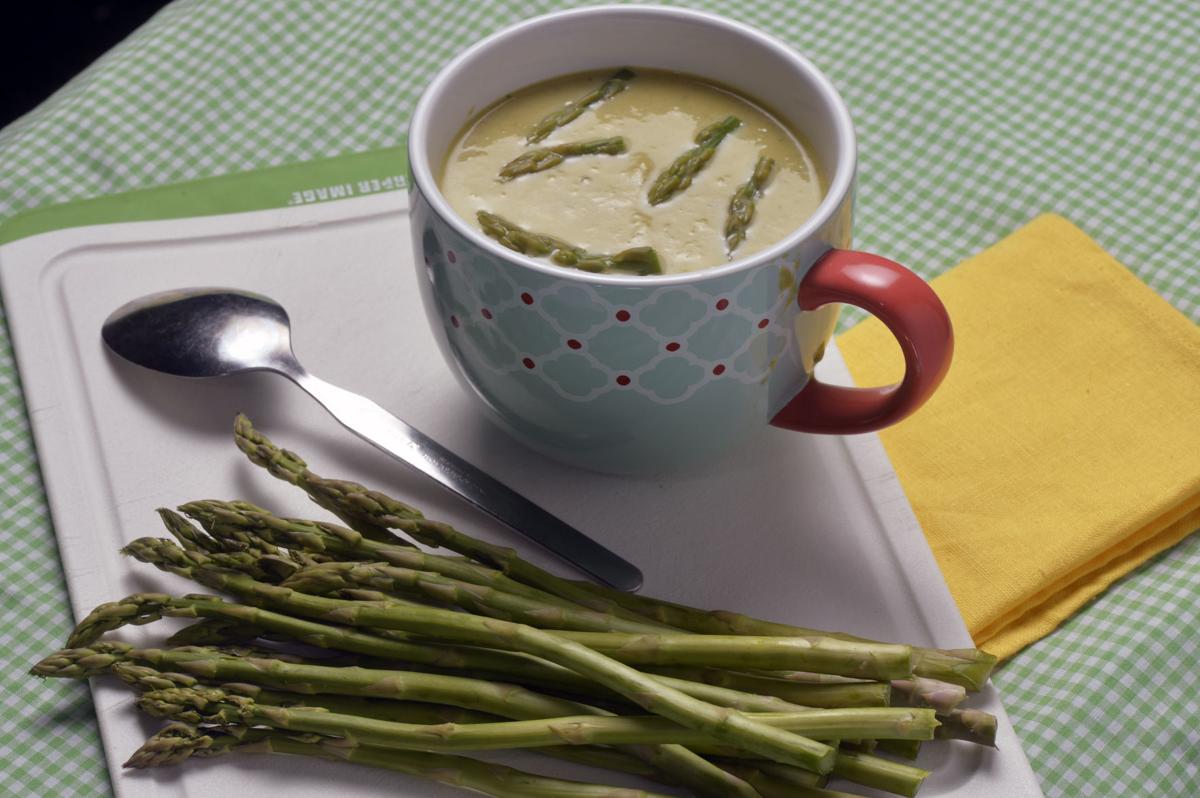 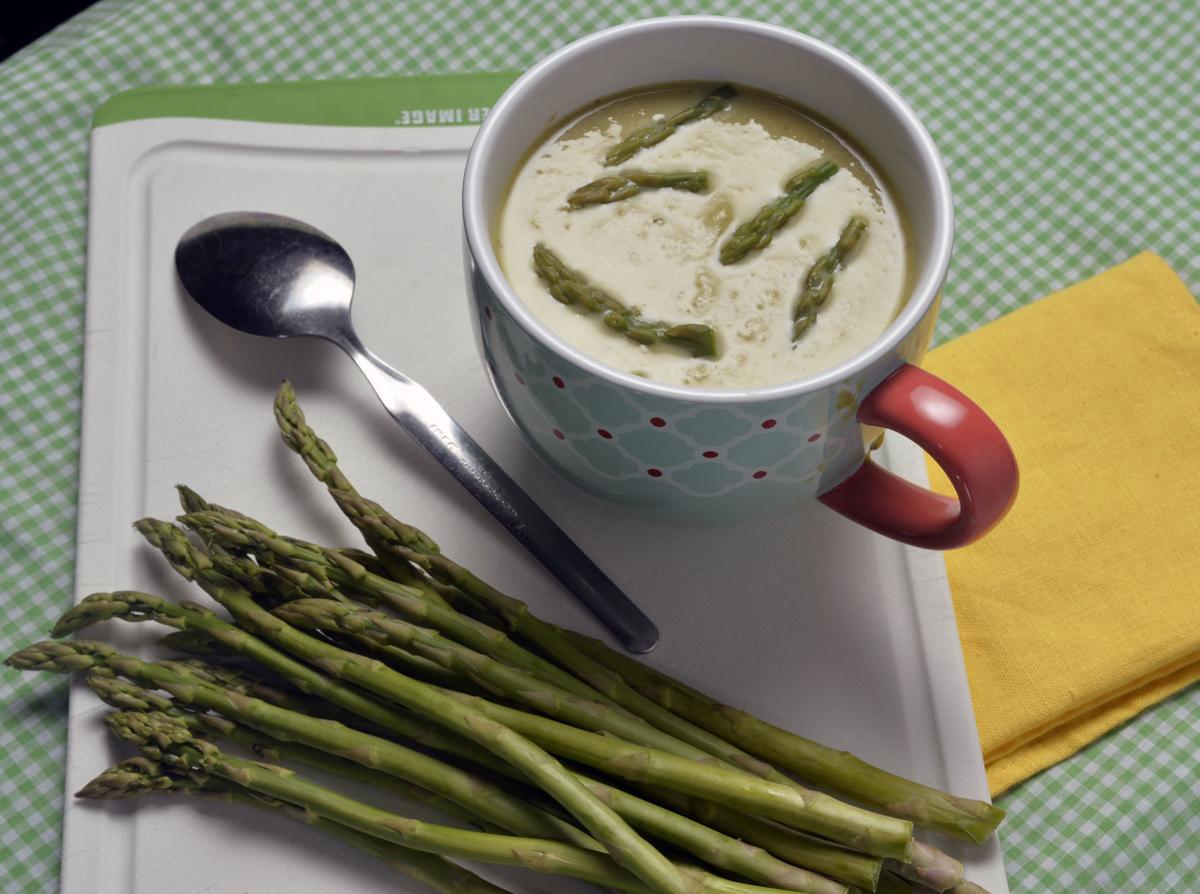 This Simply Delicious Asparagus Soup is made from a recipe from Matthew and Susan Smith in a cookbook produced by the Madison Area Community Supported Agriculture Coalition. 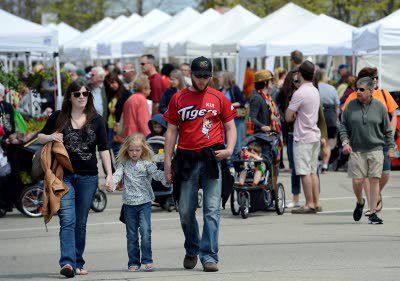 Visitors stroll through the Kenosha HarborMarket, will be back outside for another season nstarting May 11. 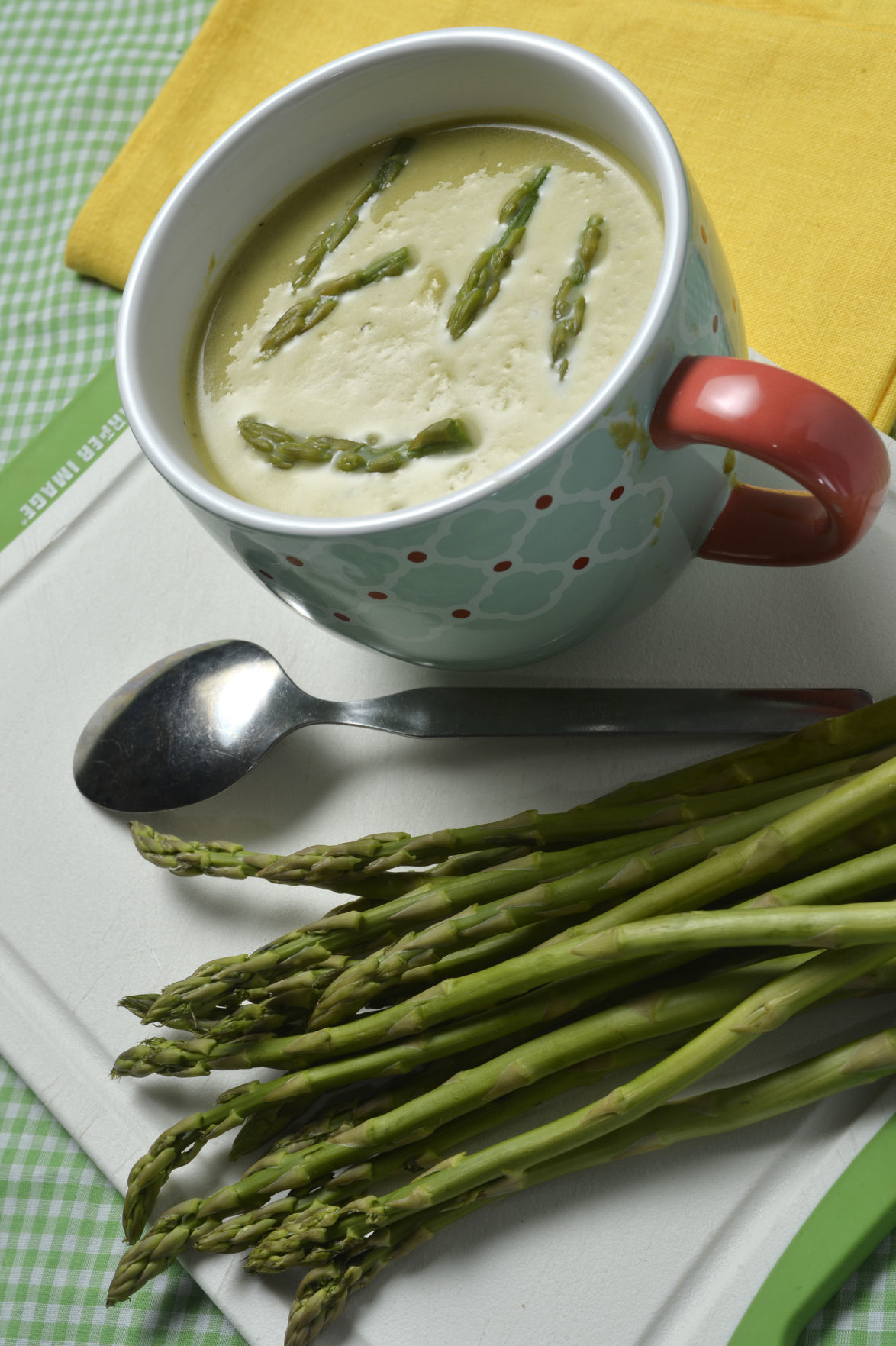 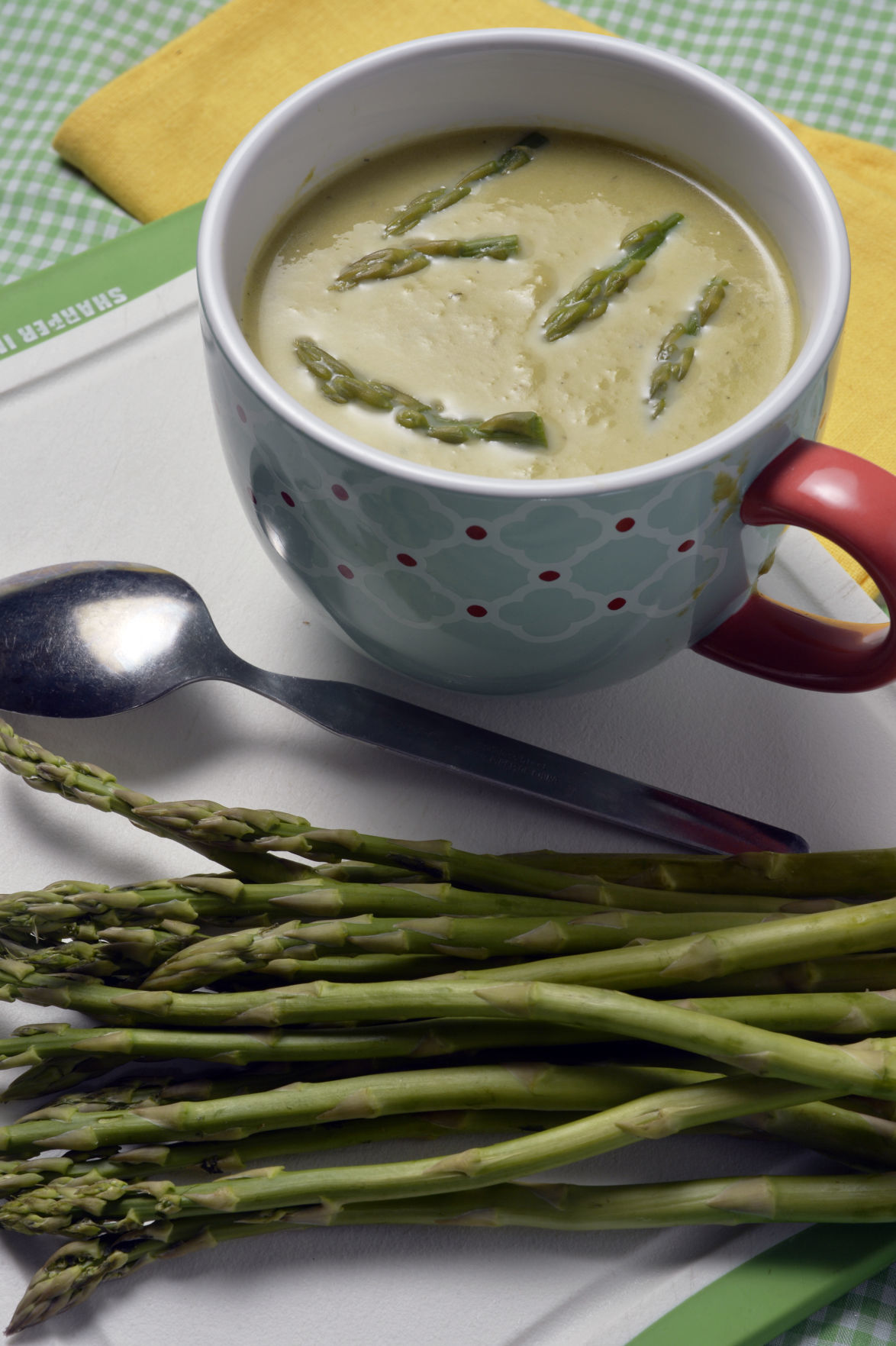 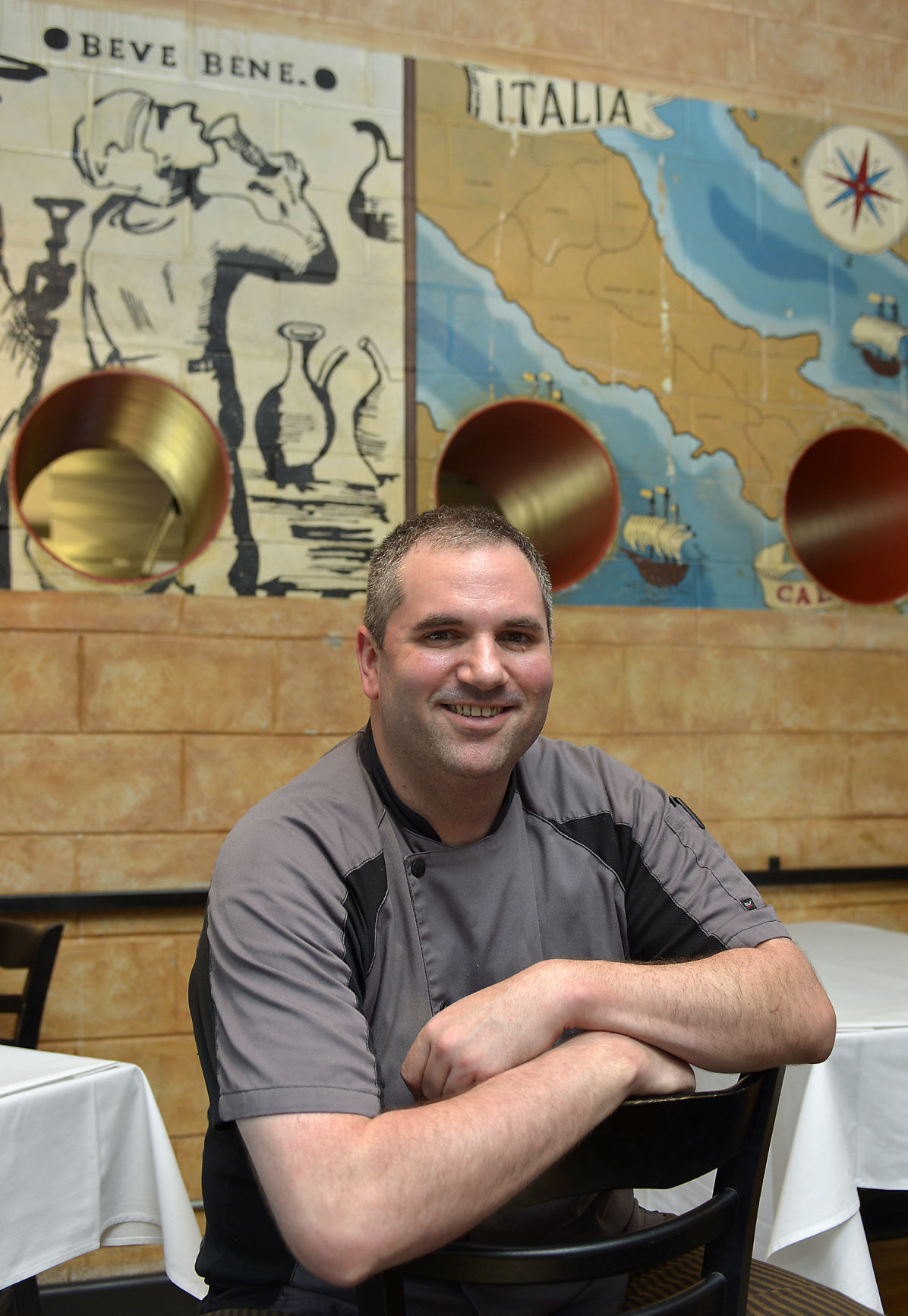 According to our calendars, spring is here.

According to nature, however, local produce is producing quite a bit later than previously scheduled.

While normally by this time we’ve got asparagus, peas and chives cropping up, these early spring goodies are way behind schedule, according to local growers.

“We planted during a dry spell and got snowed on four times,” said Bert Jones, farm manager at Living Hope Farm in Bristol.

Among the things lost to the freak snows were his spring peas.

Some things are coming in well, however, and by the debut of this weekend’s outdoor HarborMarket, Living Hope Farms will have several produce items on offer, including salad microgreens, baby lettuce and Tuscan kale.

Siberian kale, spinach and radishes are a “maybe,” Jones said, because everything is slow due to the snow.

Two weeks ago, Kate Jerome, former Urban Farm director at Gateway Technical College, reported that she noticed dill had begun to emerge, and rhubarb will be ready soon. “Peas are popping their heads up, but it will be awhile before any flowers appear. We do have tomatoes and cucumbers in our hydroponic systems in the greenhouse,” she said

Once they arrive, there are plenty of tasty ways to prepare these garden delights.

“My favorite spring dish is wilted greens. I love sauteeing spinach, chard, kale and even endive in olive oil with onion and garlic, adding a splash of balsamic, salt and pepper and a dash of Tabasco. This is my power breakfast when a fried egg is added to the top,” Jerome said.

Peas are a favorite produce perennial for growers and consumers alike. The three varieties we will be seeing soon are shell peas, which are very sweet but have an inedible pod; sugar snap peas, also sweet in a crunchy, edible pod; and snow peas, a flat, edible pod containing small, undeveloped peas.

When fresh peas do come in they are a treat, says Jerome. During the short window that shelling peas are available, she says she likes to make a “sinfully good” soup of pureed fresh peas, cream, broth and cooking sherry.

When looking into unique preparations of produce, as well as interesting background info on garden goodies, one of this reporter’s favorite resources is a cookbook first produced in 1996 by the Madison Area Community Supported Agriculture Coalition.

In its third edition, published in 2003, editors write: “One of the first spring messengers of the garden is the perennial asparagus spear, with its nose poking through the moist soil.”

Another sign of spring is wild-food foraging, whereby certain folks scavenge edible plants directly from their native habitats (as opposed to the produce section at the grocery store). Even with our late spring, it shouldn’t be long before we’re spotting foragers scouting the countryside for wild asparagus, said Dave Rogers, associate professor of biological sciences at the University of Wisconsin-Parkside.

“Advanced foragers map out the locations as they find them throughout the year and then follow up in the spring,” he said.

Local chefs and foodies appreciate the change of seasons, too.

“We want to get out of the winter mode; from big, heavy, hearty foods to a lighter flair,” said Chef David Perez of Chef David’s Catered Events.

For Perez, this means shifting from heavy comfort food sauces to foods that are sauteed and served in smaller portions.

Seafood is another way to lighten things up, he said.

Over at Red Oak Restaurant, 4410 200th Ave. in Bristol, seasonal menus have been the name of the game since it opened in the autumn of 2016.

To work with as many locally available products as possible, Red Oak chefs rework menu offerings every two months.

This spring’s menu also comes with a new executive chef. James Shields, formerly of Kenosha’s Mangia Wine Bar, joined the restaurant in March of this year.

In April he created an early spring menu that will run through early June.

“Cooking seasonally is always important to me, and cooking solely with local ingredients when they’re available,” Shields said.

HarborMarket moves to the lakefront for summer season

One of the sure signs of spring in Kenosha is the first outdoor appearance of HarborMarket.

This Simply Delicious Asparagus Soup is made from a recipe from Matthew and Susan Smith in a cookbook produced by the Madison Area Community Supported Agriculture Coalition.

Visitors stroll through the Kenosha HarborMarket, will be back outside for another season nstarting May 11.