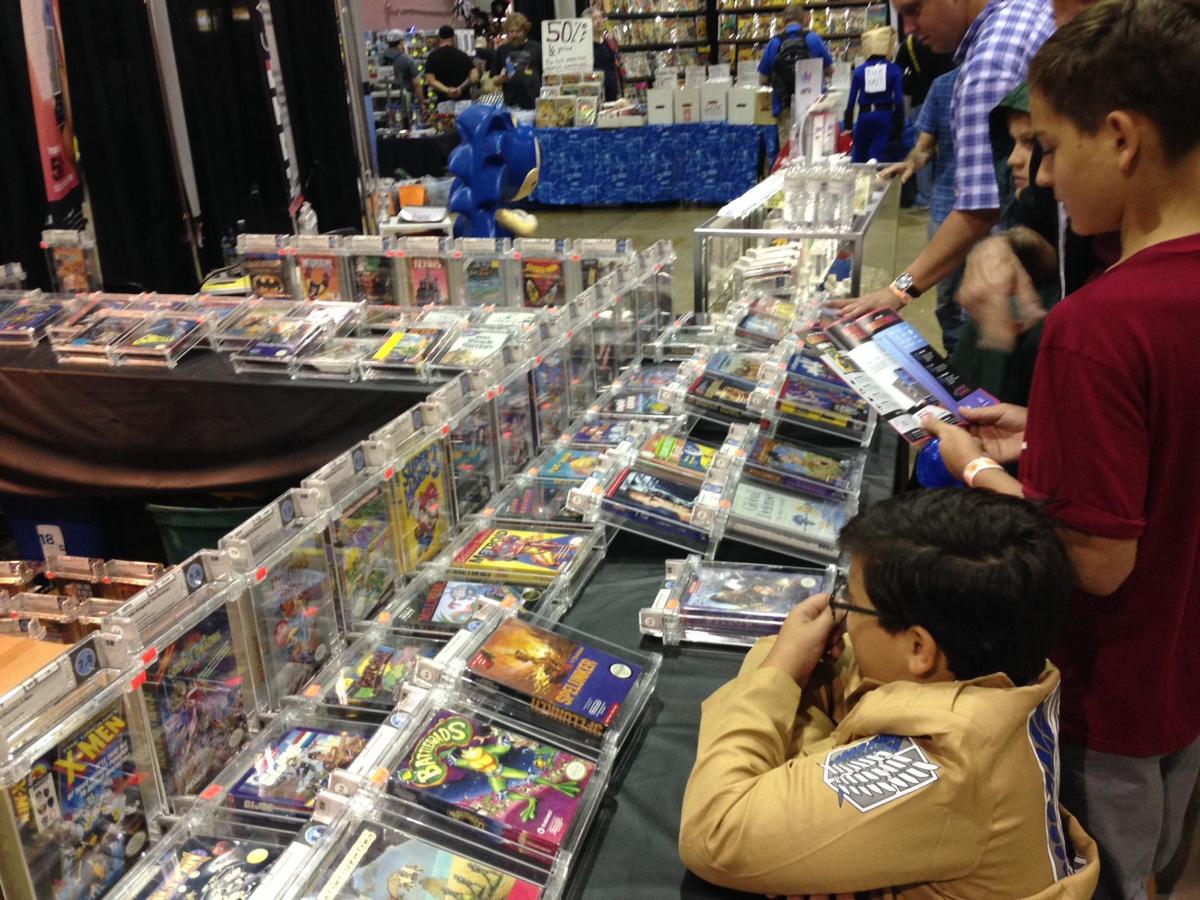 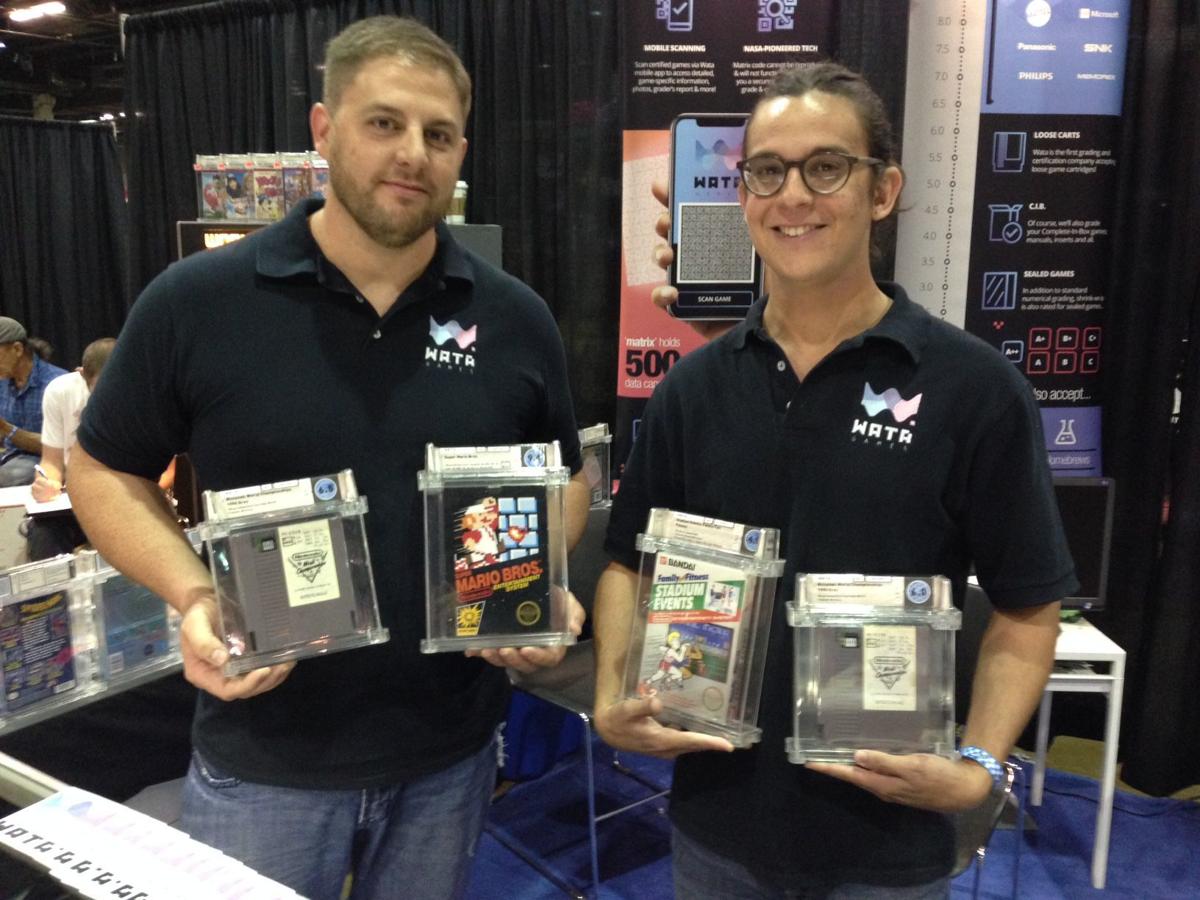 Kenneth Thrower, left, and Deniz Kahn pose at Wizard World in Chicago in August with some of the valuable games Wata Games has rated and graded. Kahn, the son of Kenosha business owner Steve Kahn, is the president and founder of Wata Games; Thrower is the chief grader. 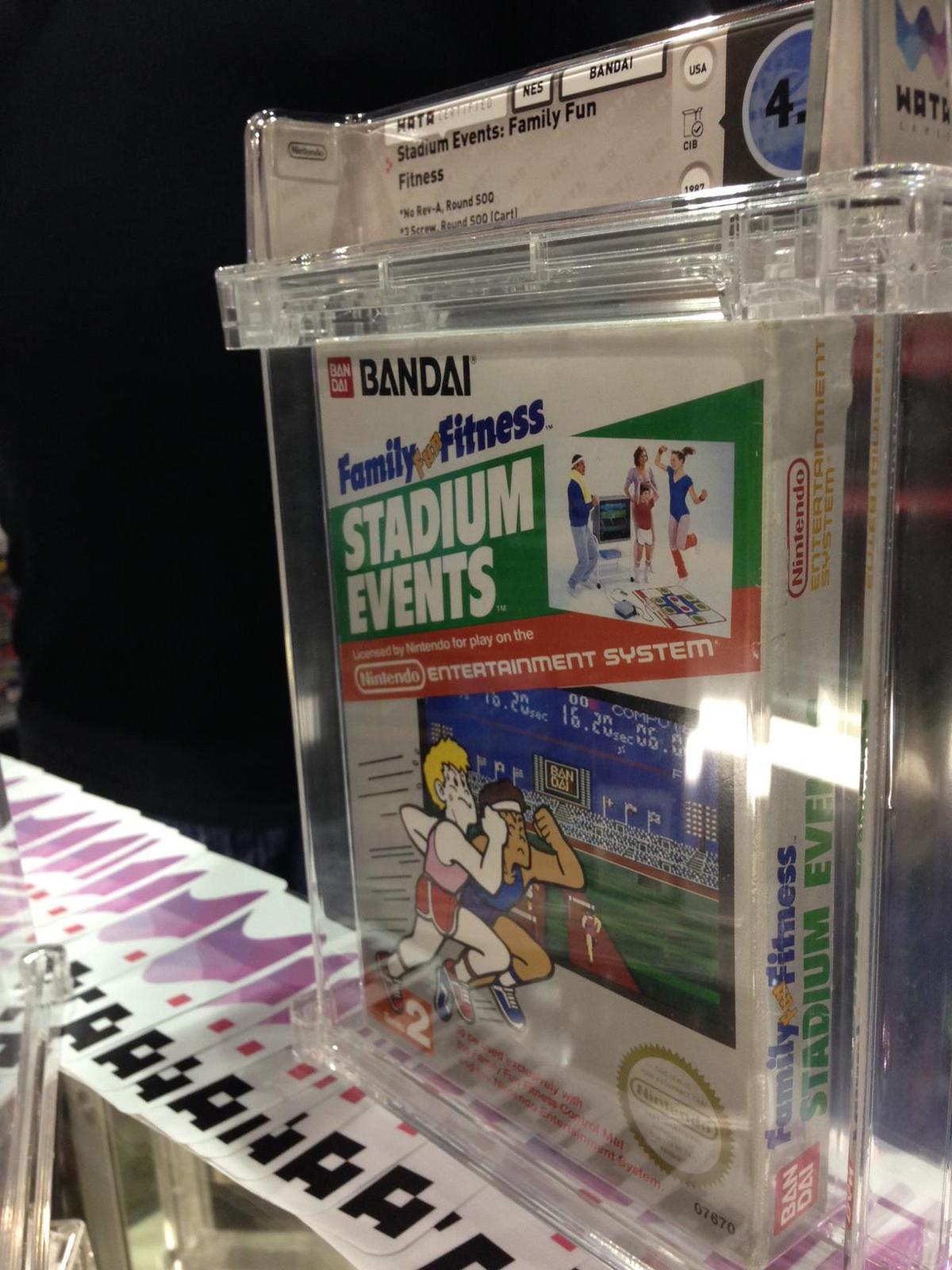 "Stadium Events" is one of the most valuable video games in the world. 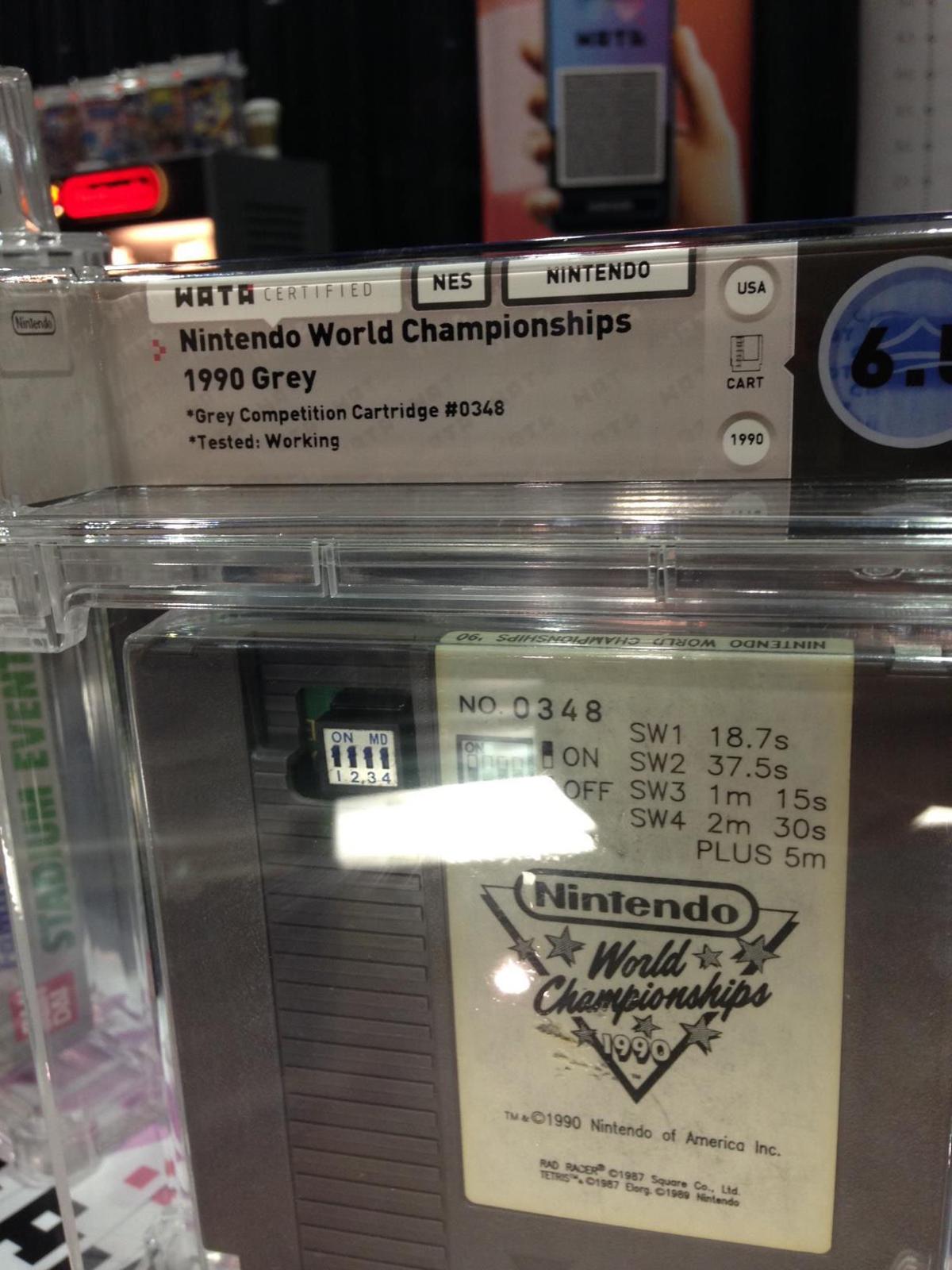 "Nintendo World Championships" is a valuable video game. This photo shows the game encased and graded by Wata Games.

If you have a shoebox filled with old video game cartridges stuffed in a closet, you may want to think twice about throwing them out.

Because even though advancing technology and the ever-changing nature of video games has made it nearly impossible to actually play games from the 1980s, it doesn’t mean they aren’t valuable.

In fact, Deniz Kahn is betting there’s some serious cash to be had for them.

For the Kahn family, it’s true that the apple doesn’t fall from the tree.

Steve Kahn, owner of Inner Child Comics and Collectibles, is an expert at collecting and valuing comics.

Now Deniz Kahn has chosen a similar path with Wata Games, and he believes his service will do for video game collecting what similar services do for collectibles such as comic books, coins and sports cards.

“It’s kind of like the Wild West right now, and that’s what makes it exciting,” Kahn said, noting authentic versions of some old, rare video games have fetched as much as $50,000 at auction.

“When we started this, I talked to a guy who said he had 50 games and threw them out. People don’t know that these are being collected. It’s a really unique hobby. Some people are sitting on gold and don’t even know it.”

So how do you know if your shoebox in the closet is actually stuffed with cash? That’s where Wata Games comes in.

Through painstaking research and co-workers with a vast knowledge of the history of video games, Wata Games, which is based in Denver, analyzes and rates collectible video games.

After a rating has been assigned, the game is sealed in a tamper-resistant plastic case and labeled with all the pertinent information about the game as well as its rating.

The company does not affix a price; that’s up to the buyer and seller to determine. But the authentication by Wata Games makes for a safer, more reliable marketplace for the games.

In the world of comics and sports cards, this type of grading and rating has been key to collectors; Kahn is hoping the same will be true for video games.

The difficulty in collecting video games is two-fold: It’s not unusual for the exact same game to have dozens of variations, from the artwork to the packaging to the release date.

Also, the market is flooded with reproductions, but it’s nearly impossible for the layman to know what’s authentic and what’s a knockoff.

“We started this because we saw the issues; we saw collectors for 10-plus years saying, ‘I’m sick of it; I’m sick of going on eBay and seeing 70 of things that are reproductions or counterfeits.’

“We created this to give people confidence to know what they’re buying. The condition is tied to standards they know can be trusted,” Kahn said. “We’re providing the resources to educate collectors, and we’re giving people more of a reason to get involved and transact with confidence.”

While Wata Games is the first of its kind and just getting off the ground — Kahn launched it in April — he already has some important backers, including Mark Haspel, one of the founders of Certified Guaranty Co., the first company to rate and grade comics. He is Wata Games’ chief adviser.

There are three categories for grading video games: the cartridge, complete in box and factory sealed. Like toys and action figures, the value is highest for those that have never been opened.

“A lot of games never came with anything but a cartridge,” Kahn said. “And we grade anything — prototypes and anything that was released. We find a way to authenticate everything.”

“We stress this immensely: Not every game is meant to be graded. You have to make a decision, and we’re here to help collectors do that. We can help guide you.”

Home video gaming started in the mid-1970s with Pong and Atari. The introduction of video game cartridges helped the market explode in the 1980s.

People who grew up in that era are now in their 30s, 40s and 50s and remembering those games can spark joyful nostalgia.

“I think people are a lot more attached to the feeling of nostalgia with video games than comics,” Haspel said.

“With video games, you play them for hundreds of hours. You play with your friends, and you get home from school and can’t wait to beat that next level. Your life becomes playing this video game. It’s immersive.”

“You may have a childhood game that has a ton of sentimental value. You won’t play it again, but you can freeze it in time, put it in a case and display it so that every time you walk by it, you can remember those memories.”

So what are the most valuable video games?

According to Denis Kahn, owner of Wata Games, a game called "Stadium Events" is the top dog, selling recently for $50,000.

The first Super Mario game is also a highly desired collector's item, he said, along with the "Legend of Zelda" prototpye.

Kahn readily admits that his father was a huge influence on him and led to Wata Games.

"I wouldn't be here today if it weren't for my dad. Being able to collect and have the support from someone who's also a collector is what made me able to pursue this.

"When I was collecting and I was 13, 14, 15, I couldn't drive. He was right there, always willing to help, waking me up at 4 a.m. when I wanted to go to a flea market. Those are the best memories of my life, and they're all thanks to him."

He also supports his father's goal of creating a pop culture museum based around the elder Kahn's massive collections of 200,000 comic books and tens of thousands of figurines, toys and other paraphernalia.

"It's a dream that I know will happen some day, and I can't wait for that. It seems like a distant thing. But when I think about it, it gets me excited, because that is the end goal. I want to share the history with people, and you can't do that without a museum."

Our daily lives have changed quite a bit since the coronavirus outbreak, including how we buy groceries.

Kenneth Thrower, left, and Deniz Kahn pose at Wizard World in Chicago in August with some of the valuable games Wata Games has rated and graded. Kahn, the son of Kenosha business owner Steve Kahn, is the president and founder of Wata Games; Thrower is the chief grader.

"Stadium Events" is one of the most valuable video games in the world.

"Nintendo World Championships" is a valuable video game. This photo shows the game encased and graded by Wata Games.