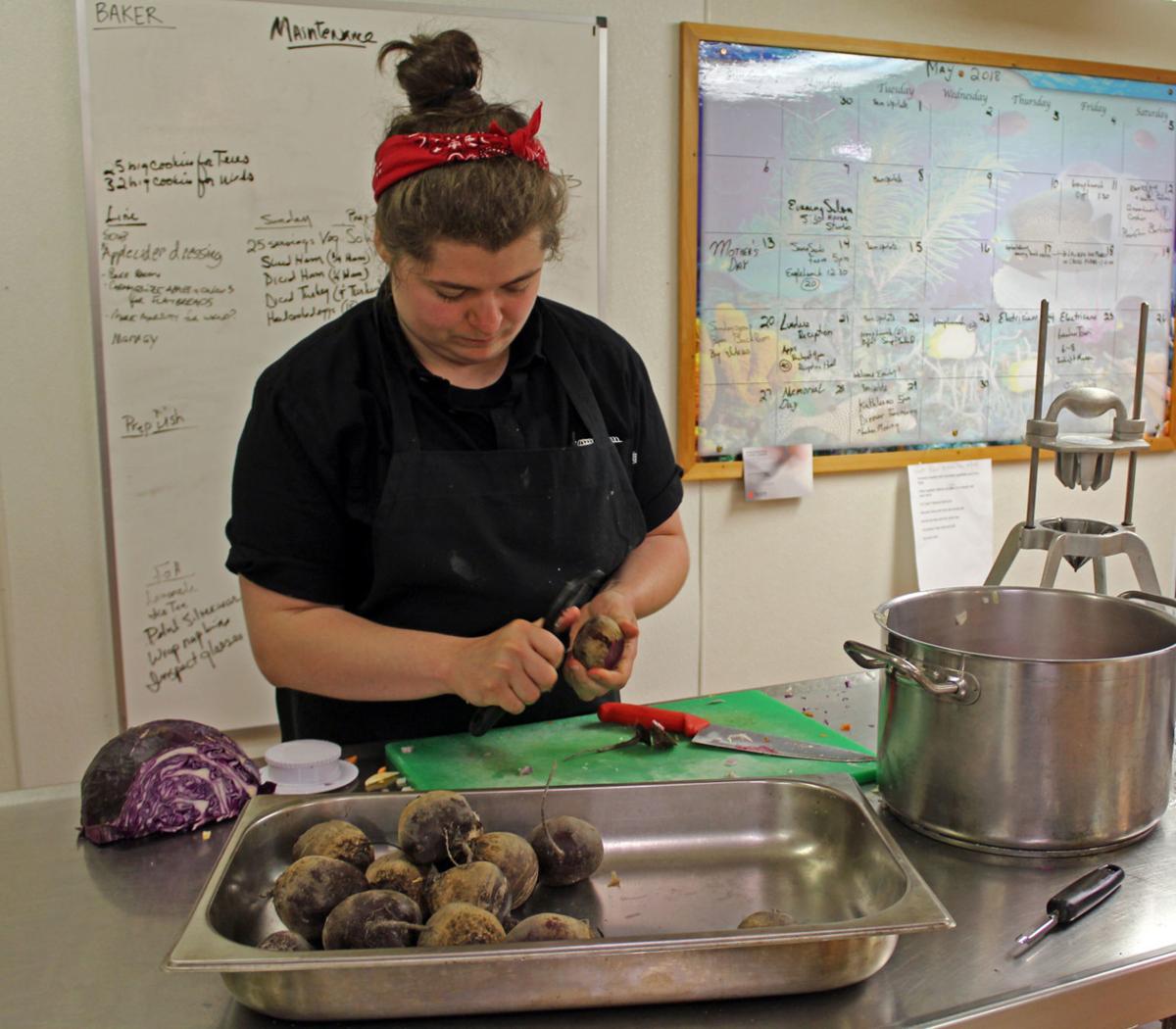 Gabe Hafemann of La Crosse peels beets near the end of her workday as one of eight culinary apprentices. 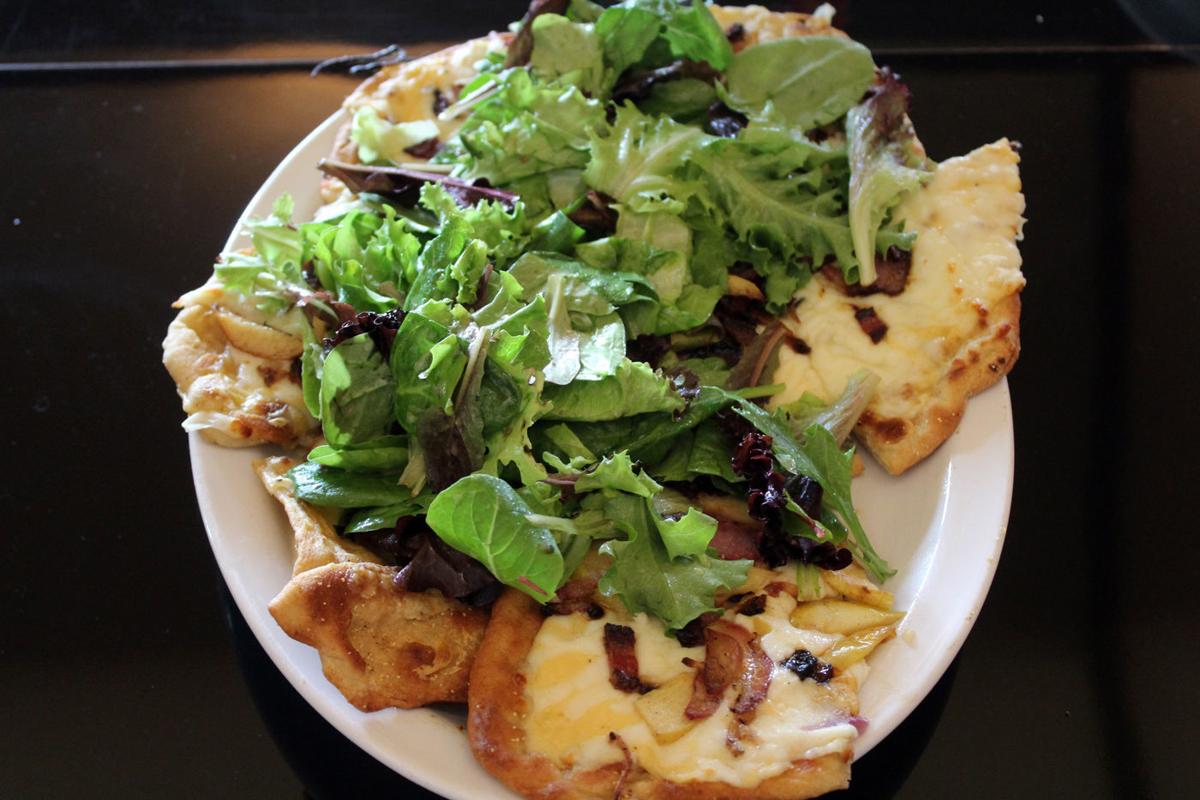 On the menu: Wisconsin River Flatbread, whose ingredients include Mornay sauce, mozzarella, bacon, caramelized onion and apple on a whole-wheat crust whose flour is ground 12 miles northwest of the café. 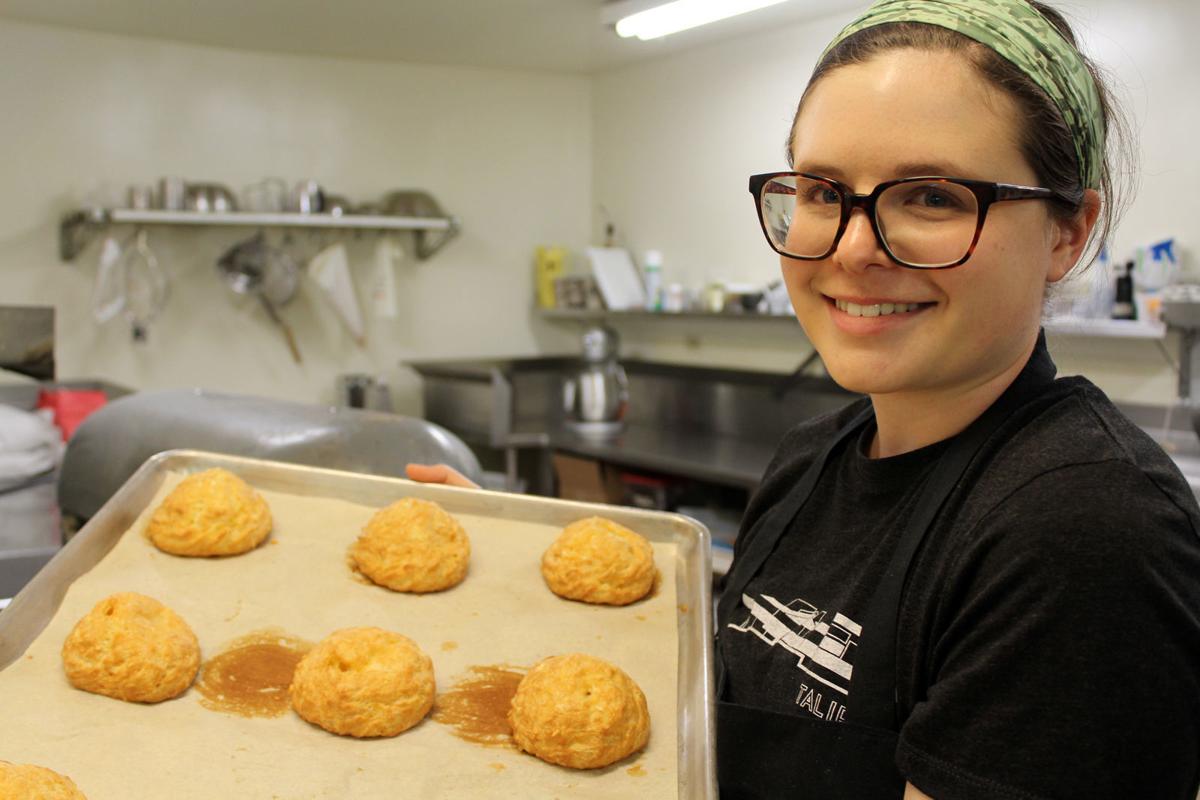 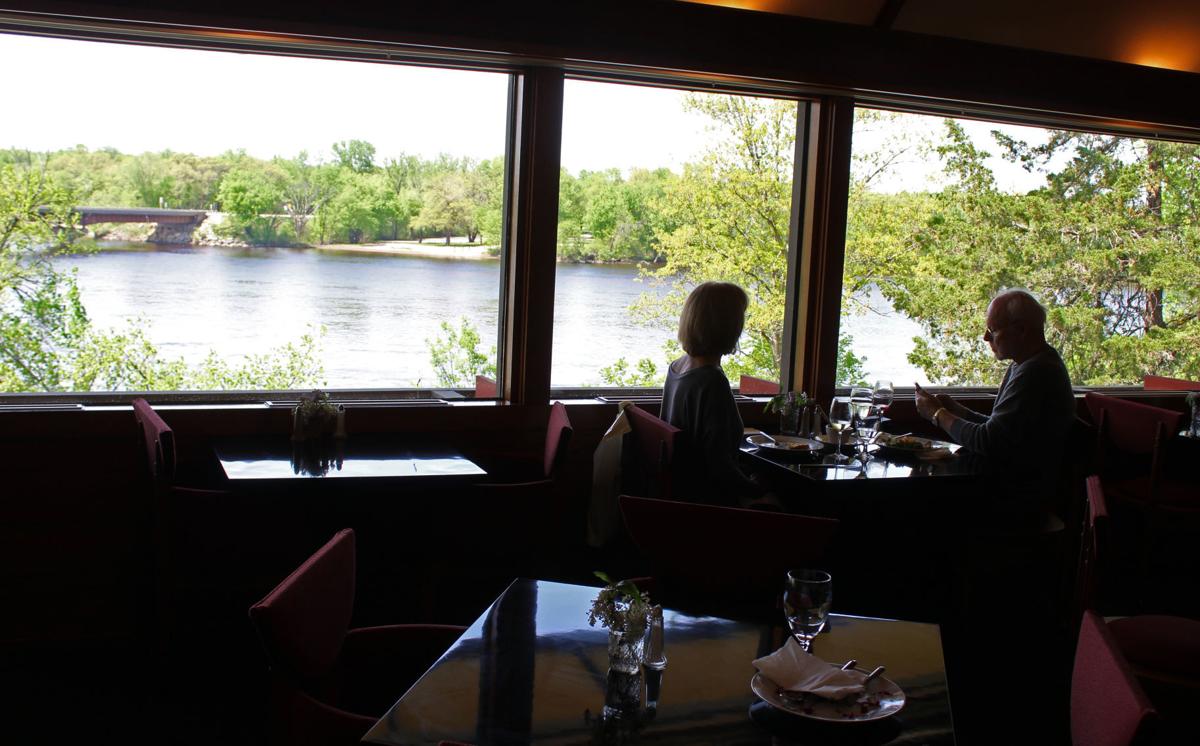 The Riverview Terrace Café, which opened in the 1950s, has panoramic views of the Wisconsin River. 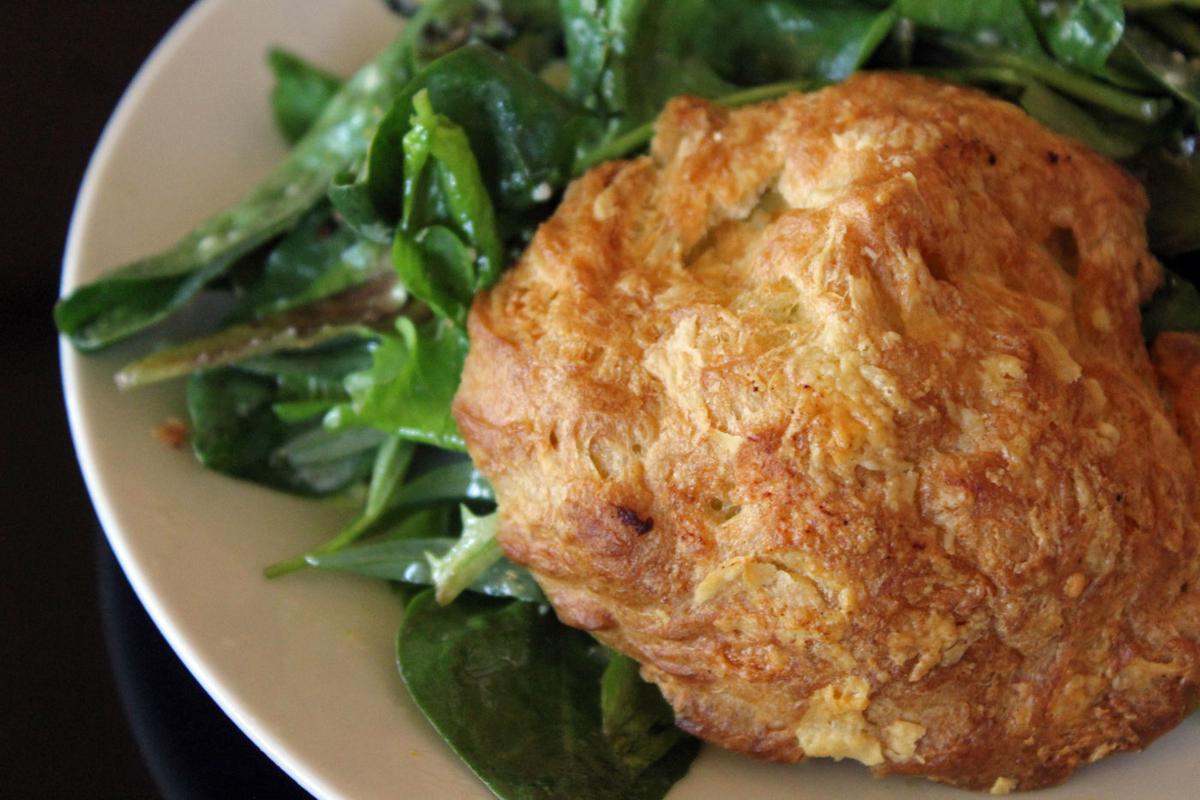 The Uplands Cheese Puff is made with a multi-award-winning cheese that is made eight miles from Riverview Terrace Café. 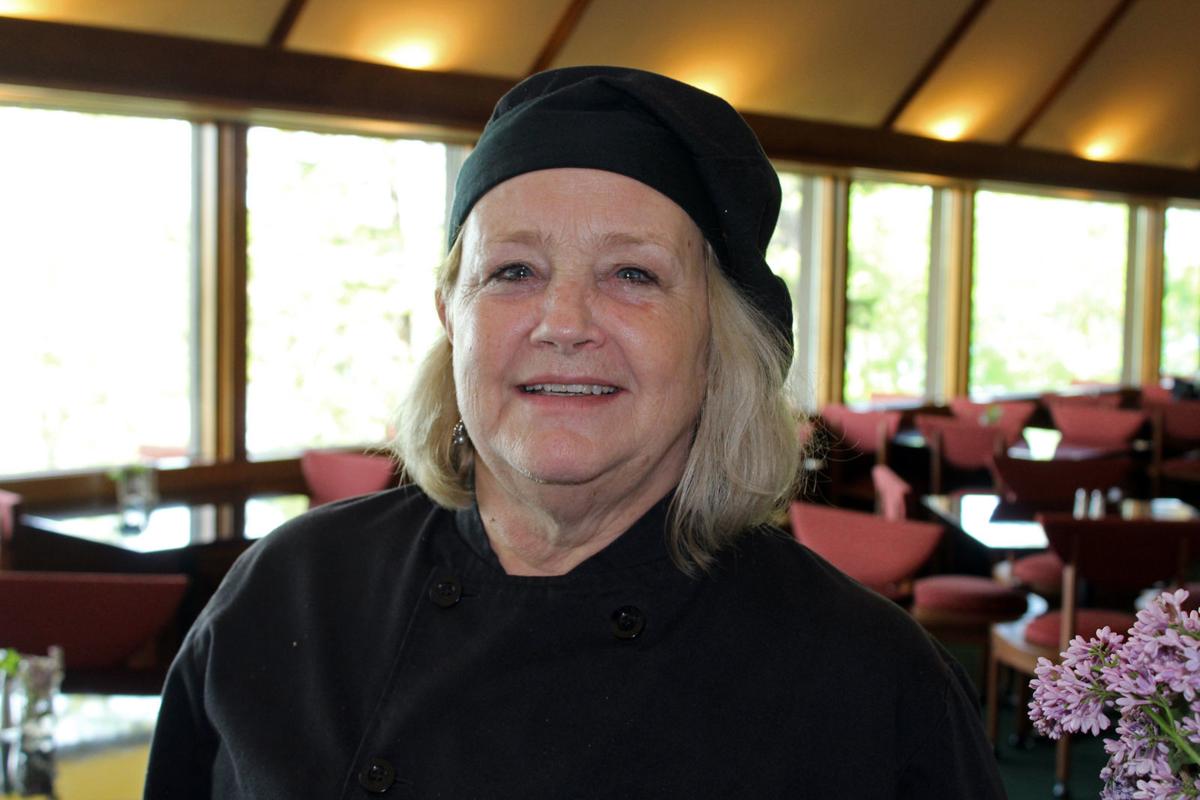 The panorama is rarely less than stunning at Riverview Terrace Café, inside the Frank Lloyd Wright Visitor Center near Spring Green. Diners gain wide and head-on views of the Wisconsin River, curvaceous Wyoming Valley, occasionally eagles and other wildlife.

Now the restaurant’s menu and philosophy realign to match the architect’s legacy of honoring the close-to-home bounty of nature. A James Beard Foundation award winner leads the effort.

Wright’s designs typically were built with local materials and gorgeous views. Riverview Terrace already has the right scenery, but chefs want a menu that takes local ingredients and products much more seriously.

The Wright philosophy of “learning by doing” also pertains because of a new, seven-month program to train eight apprentices (out of 72 applicants) to take a more holistic view of restaurant work.

That means field trips to farms and chats with cheesemakers, in addition to learning how to cook and bake. Learning food preservation techniques as well as food safety rules. Critical thinking about sustainability as well as how to cater a reception.

“Farm-to-table dining” might sound like a trite phrase as more and more restaurants use it, but the teachers for this hands-on project are not ordinary. Developing the menu, recipes and philosophy is Odessa Piper, national Best Chef Midwest in 2002. Executing, supplementing and interpreting her game plan is Barbara Wright, most recently chef for Taliesin, the 800-acre Wright estate and architecture school.

“It’s the same as a culinary school, but with no debt for the students,” who are offered affordable housing as well as paid for their work while gaining on-the-job training, said Carrie Rodamaker, Taliesin Preservation executive director. Her nonprofit’s twofold mission is to preserve the estate and educate the public about Taliesin, Wright and the architect’s priorities.

Piper, who lives in Boston but spends one week per month in Spring Green, proposed this effort in the 1990s, “but there was too much going on to pursue and Taliesin didn’t have the infrastructure in place to support it,” Rodamaker said.

The proposal was revived after Piper helped pull together a gala fundraiser meal in 2017. Out came a multi-course banquet that was heavy on excellence and close-to-home ingredients.

Apprentices began work one month ago. “We looked for people with restaurant or agriculture experience, or an interest in sustainability and a passion for what they are doing,” Wright said.

Jama Yoder of Indiana worked on an organic farm in New Zealand before moving to Spring Green. Selena Warsaw-Lane grew up on Future Fruit Farm, eight miles from Taliesin; she was 11 years old when first meeting Piper as the chef shopped at her parents’ farm market booth.

Now pears and apples from Future Fruit Farm’s 32-acre orchards will end up on the Riverview Terrace menu. Early examples: rhubarb-apple hand pies and an entrée salad with apples and cheese curds in microgreens.

“We see how seasonal produce (or, in this case, apples in cold storage) forms the menu,” Warsaw-Lane said.

This is her first job at a restaurant. At the other extreme is Ellen Coatney, a new culinary arts grad of Madison College. Her specialty is baking, at which she’ll eventually train her colleagues.

Among Coatney’s first challenges: Learn Piper’s recipe for the Uplands Cheese Puff, made with Pleasant Ridge Reserve, a national Best of Show winner, made eight miles south. Coatney also makes Piper’s Spice Girls, a compact and secret-spice version of the original Morning Bun (which Piper created at Ovens of Brittany in the 1970s — now bakeries and cafes serve it nationwide).

Both are signature menu items.

“We want to make this a place to celebrate local food,” Wright said, instead of using a one-stop food purveyor for ingredients. Daily menus are short, fluid and depend on availability of local ingredients. That might mean asparagus-ramp soup one day, beet and brambleberry on the next, and then a mix of root veggies.

“It’s a new mindset,” Wright explained. “We want people to know this is a school and that we’ll be changing things up” as ingredients for menu offerings ripen and dwindle, sometimes before a day ends.

“We feel like we’re doing something that he wanted,” Wright said, regarding the architect, who died before the café’s building was constructed in the 1950s. If all goes well, a Friday night fish fry or picnic meals for American Players Theater patrons may be added before summer ends.

Working with Wright and her crew is Fazenda Boa Terra (“Good Earth Farm,” translated), whose farmers moved to the area from Minnesota in 2013 to enrich farming on Taliesin acreage. They also teach farmers business practices that are both sustainable and profitable.

The farm produces more than 150 kinds of 50-some organic vegetables and raises broiler chickens. It plans to eventually add, fruit, eggs, beef and grains. Work opportunities include apprenticeships with an agronomist and environmental scientist. fazendaboaterra.com

Follow taliesinpreservation.org for details about the café and special events that involve dining on the Taliesin estate. These include:

Taliesin Farm Dinners, 5-8 p.m. July 8 and Aug. 26 — A four-course meal with beer and wine that favors local products and ingredients. Prepared by visiting chefs and served outdoors for 100 guests. $125.

Shining Brow Gala: Oct. 19 — An annual fundraiser and dinner that pays homage to architect Wright’s legacy and continued preservation of Taliesin. Details to be announced.

Weekly “Roads Traveled” columns began in 2002. These syndicated articles, archived at www.roadstraveled.com, are the result of anonymous travel, independent travel, press trips and travel journalism conferences. What we choose to cover is not contingent on subsidized or complimentary travel.

Gabe Hafemann of La Crosse peels beets near the end of her workday as one of eight culinary apprentices.

On the menu: Wisconsin River Flatbread, whose ingredients include Mornay sauce, mozzarella, bacon, caramelized onion and apple on a whole-wheat crust whose flour is ground 12 miles northwest of the café.

The Riverview Terrace Café, which opened in the 1950s, has panoramic views of the Wisconsin River.

The Uplands Cheese Puff is made with a multi-award-winning cheese that is made eight miles from Riverview Terrace Café.