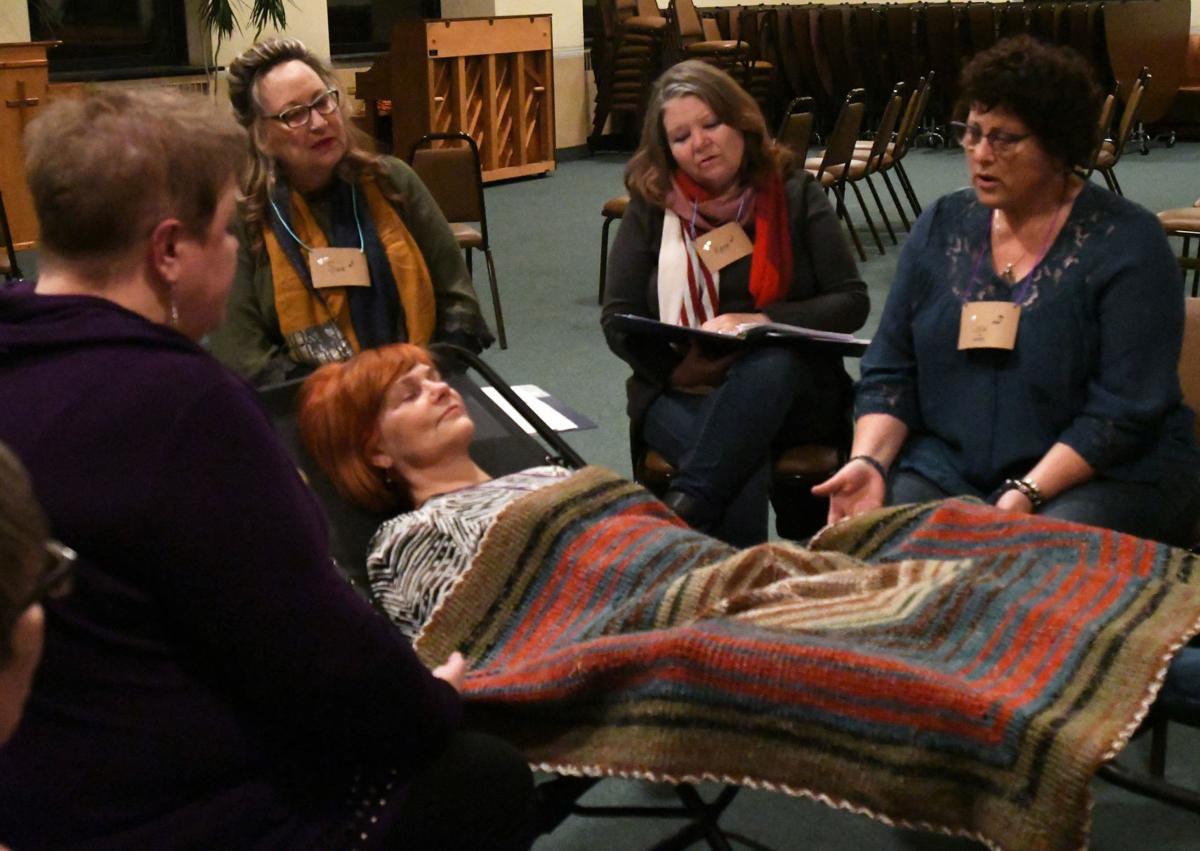 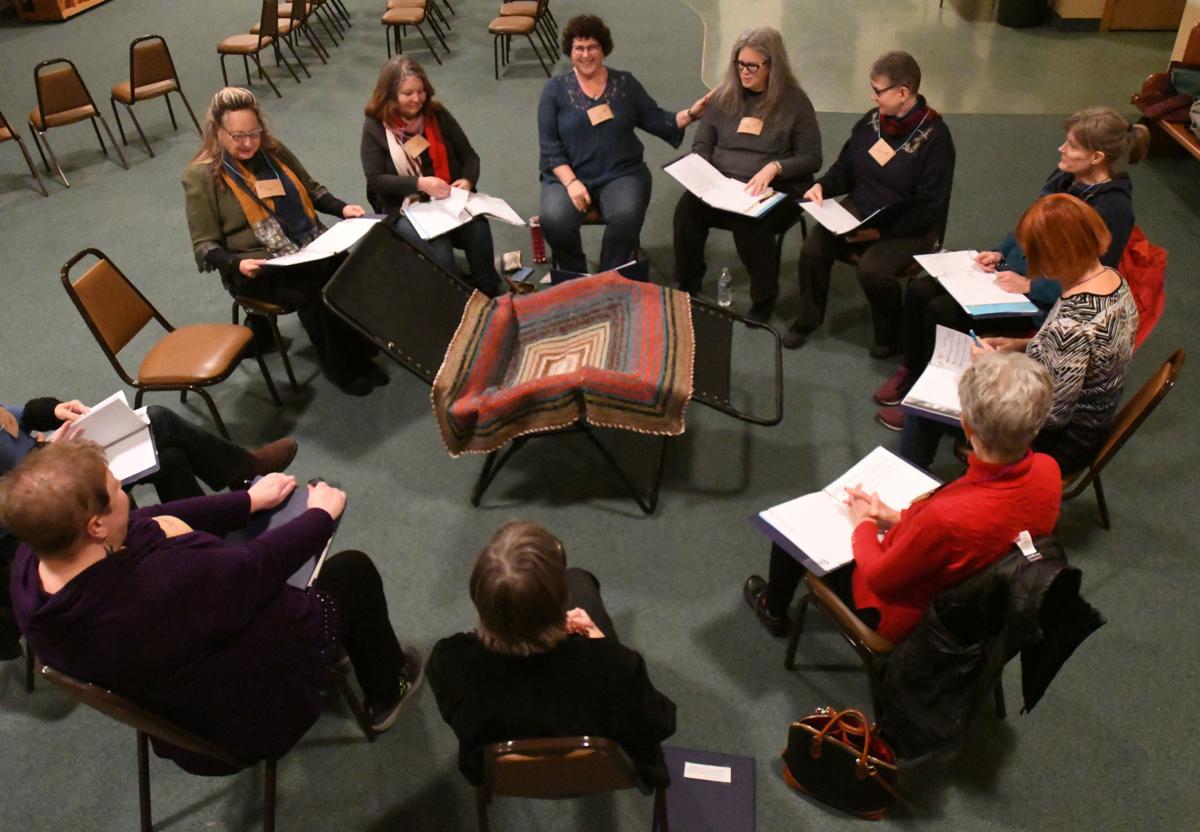 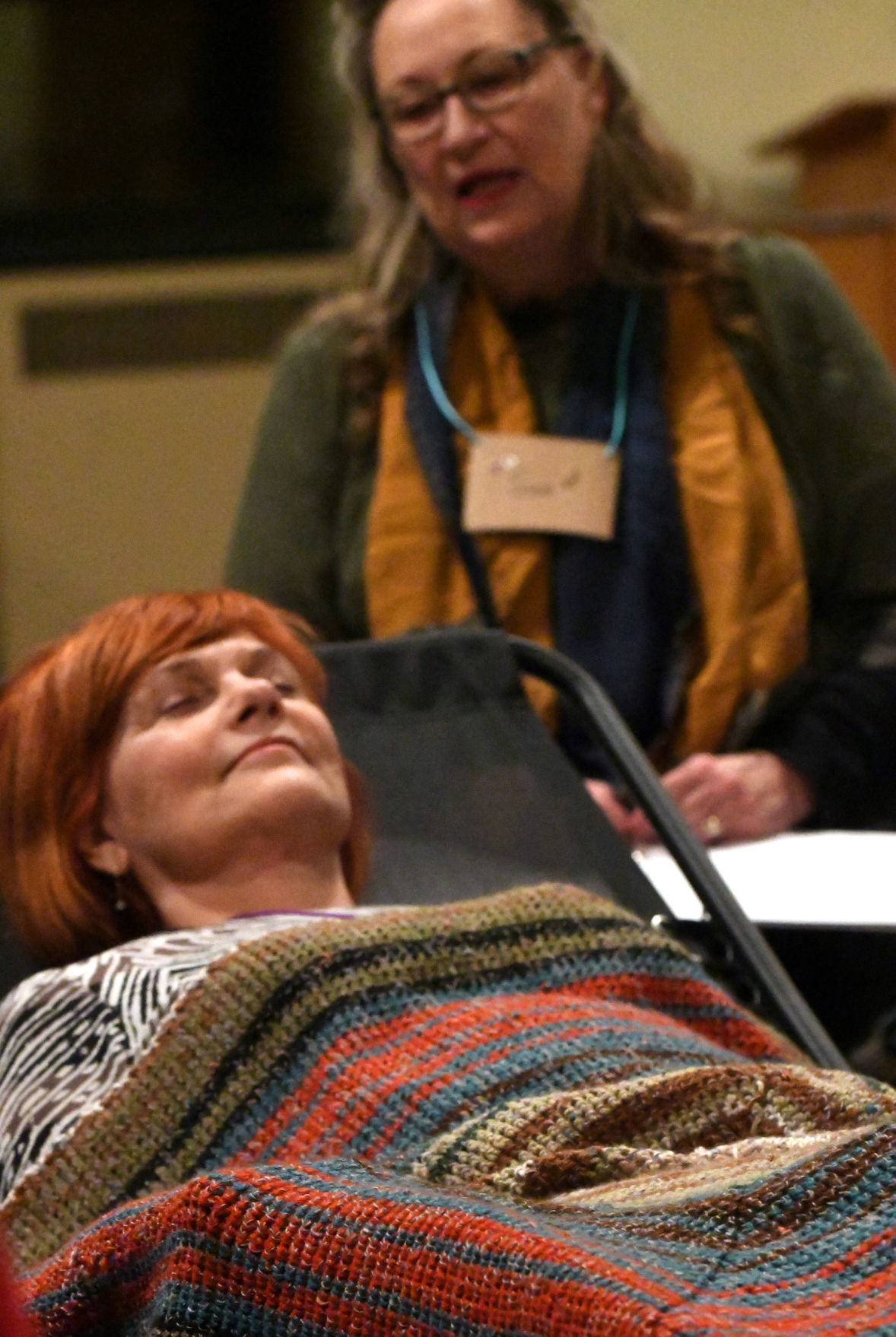 Angela Gordon receives a song from Sue Cooper and the rest of the Kenosha Lighthouse Threshold Singers. 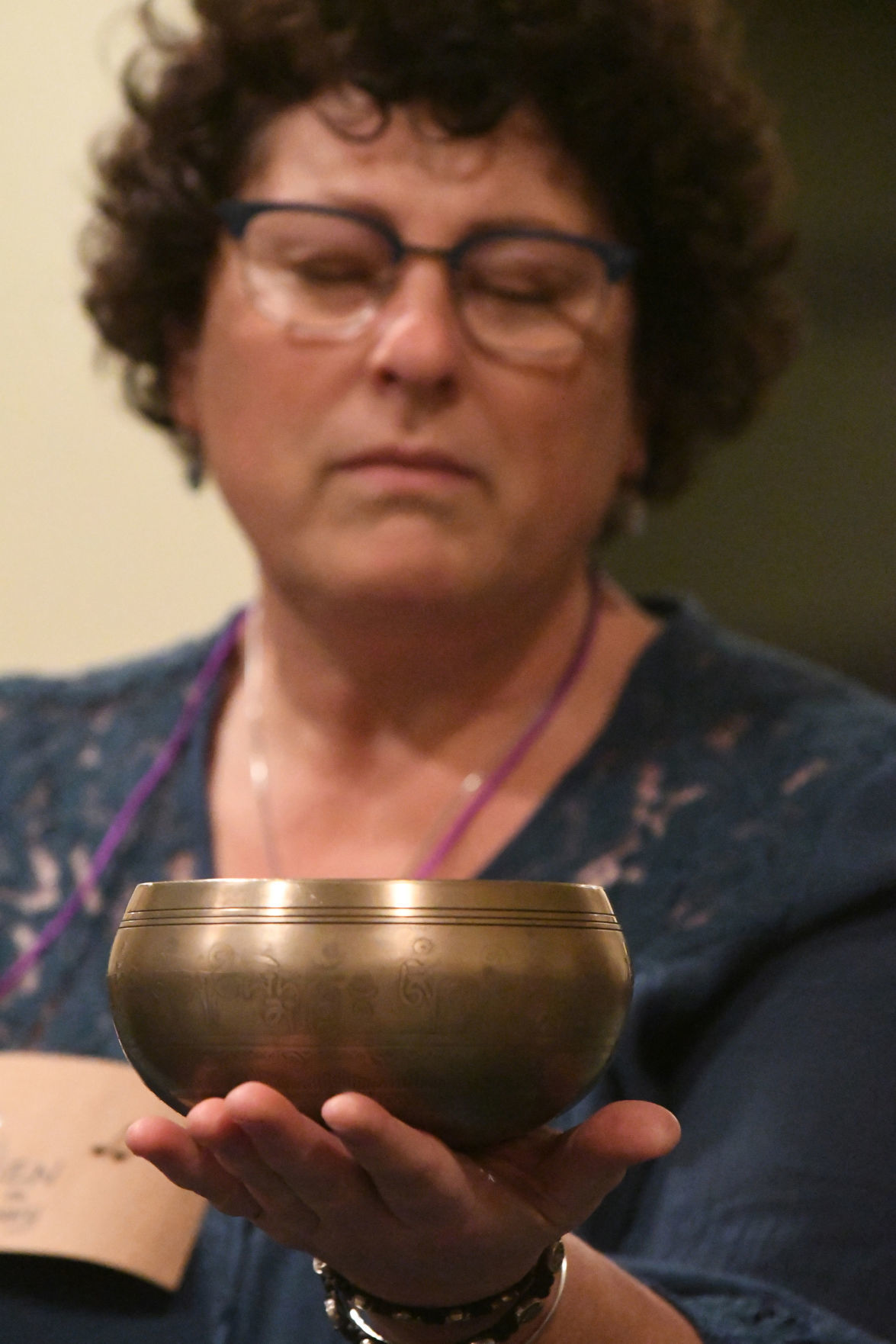 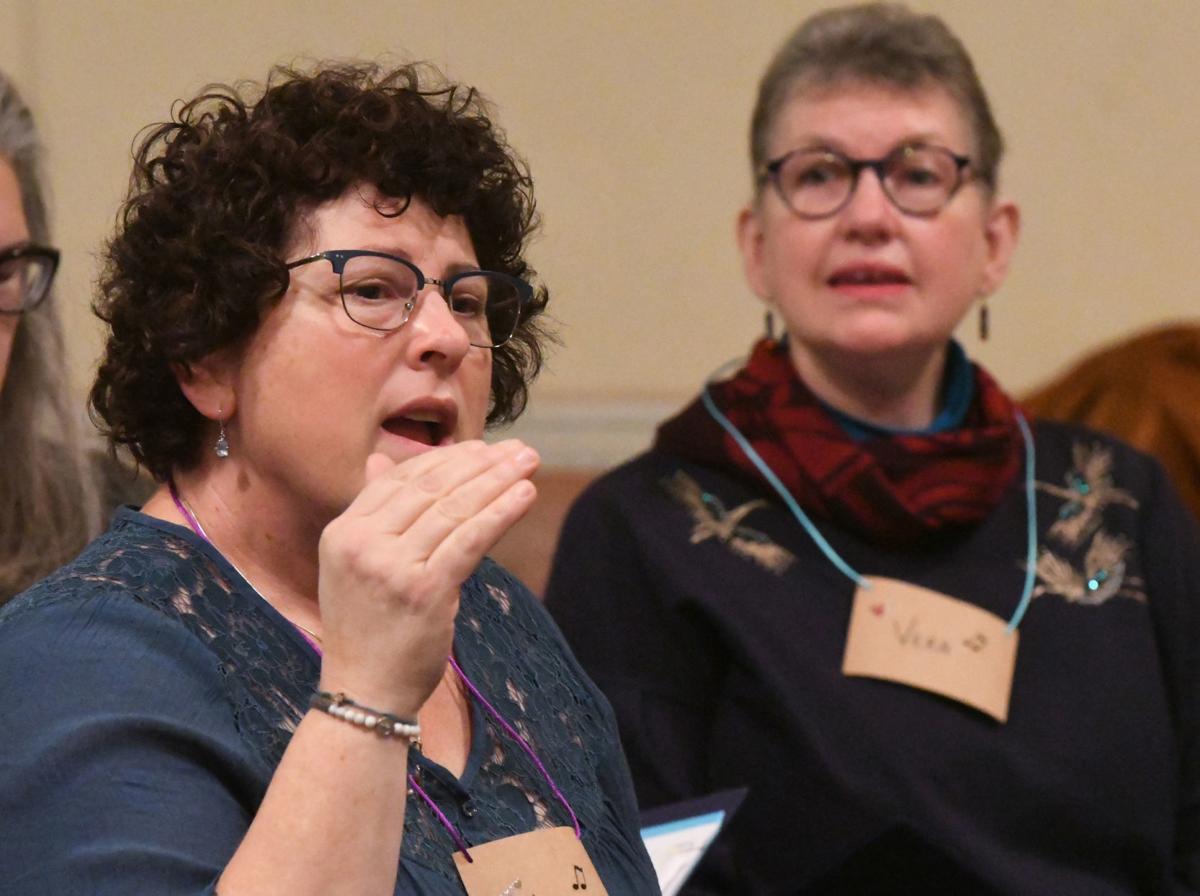 Director Jennifer McCombe leads a song during rehearsal of the Kenosha Lighthouse Threshold Singers. Vera Smith is pictured at right. 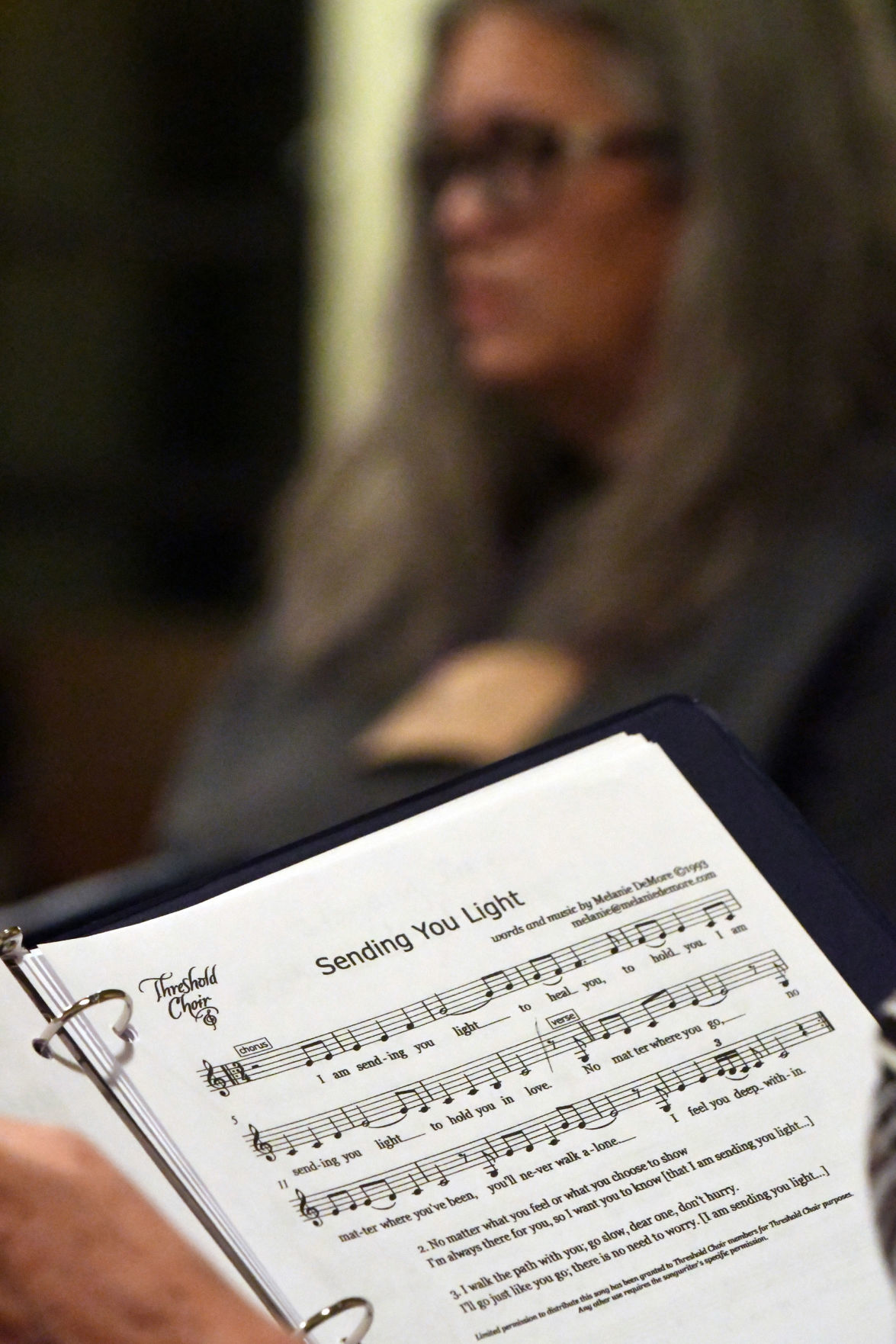 Sheet music and song lyrics learned by the Kenosha Threshold choir is part of the repertoire committed to memory by Threshold chapters throughout the country. Choir member Amy Parrish in background. 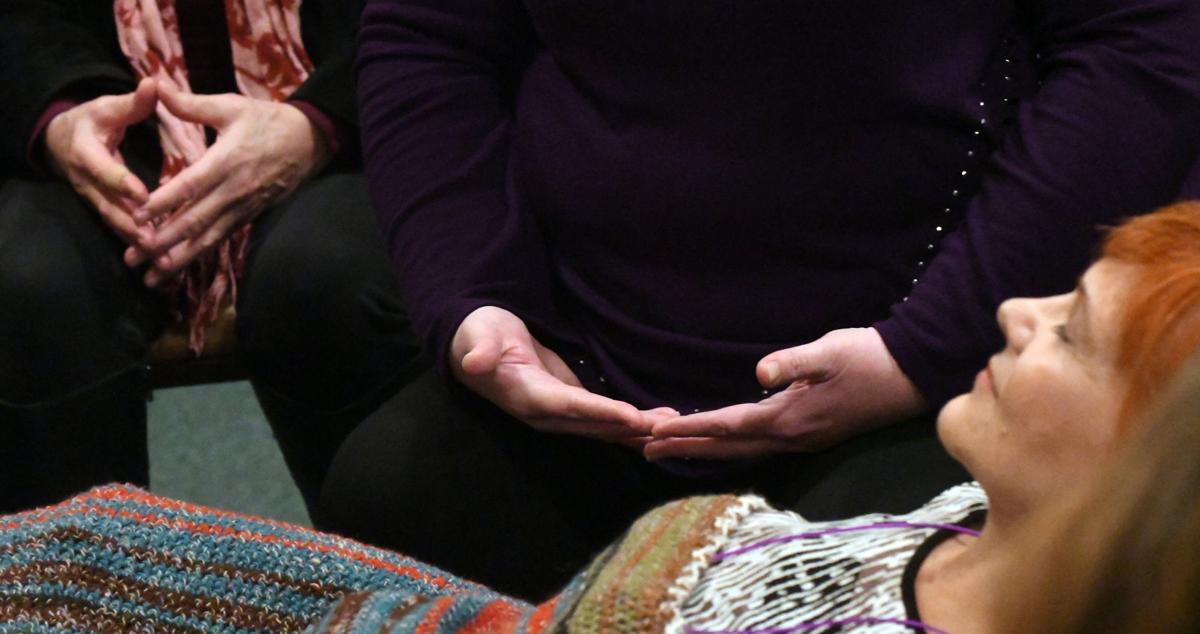 While they sing, some members of the Kenosha Threshold choir hold their hands in prayerful meditation. Member Angela Gordon is pictured.

Twice a month on Wednesday nights, a dozen or so women sit in a circle surrounding a folding chair in the Guild Hall of St. Matthew’s Episcopal Church.

Seemingly spontaneously, they break into songs with words like “May peace be with you,” and “Let the angels wrap you in love.”

This is a choir, but unlike a typical church or community choir, the Kenosha Lighthouse Threshold Singers sing for those who may never acknowledge their presence.

The Kenosha Lighthouse is a chapter of Threshold Choir, an international movement with the unique mission of singing to those nearing the end of their lives.

Threshold Choir was founded in 1999 by Kate Munger of California, a woman who discovered the power of singing at the bedside of a dying friend.

“I felt as if I had given generously of my essence to my dear friend while I sang to him. I also found that I felt deeply comforted myself, which in turn was comforting to him,” says Munger on the Threshold Choir website.

Munger called her first gathering of 15 women on the vernal equinox, March 21, 2000, in El Cerrito, Calif. The concept took off and soon chapters of not-for-profit Threshold choirs were springing up throughout the U.S. Today there are about 220 U.S. Threshold choirs as well as chapters in Canada, Mexico, Europe and Asia.

Munger, 70, has recently retired from Threshold Choir leadership, but maintains a passion for the mission. “The most important thing is our motto; the watchwords, ‘Kindness made audible,’” she said.

As soon as she heard about Threshold Choirs in the summer of 2018, Kenoshan Jennifer McCombe wanted to offer one to her community.

A choir member at St. Matthew’s Episcopal Church, McCombe, 55, received a small grant from the church to help launch a Threshold chapter.

Under the coaching of Grace Fill, former director of Wheaton Threshold Choir, McCombe was soon ready to convene the first gathering of the Kenosha Lighthouse Threshold Singers.

The first rehearsal consisted of McCombe plus seven other women from St. Matthew’s and the community at large.

Since then the group has grown to 16 members; some versed in vocal technique; others who do not read music. “We’re singing from the heart,” McCombe said.

A cappella at bedside

To prepare for singing at bedside unaccompanied by instruments, they learn by ear, without the aid of a piano. “This helps singers learn to blend their voices,” McCombe said.

When Threshold singers are called to a hospice setting, they visit groups of three or four. They sit on stools by the bedside of a dying patient so as to sing at heart level, from their hearts to the patient’s. They sing a capella, in unison or in three-part harmony.

Before a chapter can be officially “launched” it is expected that it will have several songs committed to memory, which can take up to eight months of practice, McCombe said.

The Kenosha Lighthouse launched this past August and to date has committed over 20 songs to memory from the national organization’s 450-song repertoire.

During one-and-half-hour practice sessions, McCombe leads songs they have learned and models new ones.

As with other Threshold choirs, the Lighthouse group sits in a circle, in the center of which is a zero-gravity lounge chair with a hand-woven blanket. The chair represents the bedside at which the singers might be. On the chair is a blanket red, blue and browns representing the chapter’s Kenosha lighthouse theme.

Sometimes one of the singers will take the chair for a song of healing.

Following announcements and a brief meditation, McCombe hums a note, and they all take off in unison. Soon haunting harmonies are wafting through the air — lullabies and chants, some sung in rounds.

The songs speak of angels, nature, rest and serenity, in slow, measured cadence. The songs have few words, but espouse messages of peace to soothe the restless or agitated.

“The songs are simple and slow like a lullaby to comfort and relax the recipients,” explained McCombe. “As singers we do not want to interfere with the process of transitioning.”

Interestingly, familiar songs like “Amazing Grace” are not part of the repertoire and not usually sung at bedside.

“We do not sing well-known songs as they can pull the person back from the threshold of dying,” McCombe said.

Occasionally a singer will make a suggestion — a change of a word, or shift in tempo or pitch and the group works together to address the concern.

In the case of a missed-start or forgotten lyric, good-natured laughter erupts and they go at it again.

Although their mission is solemn, the spirit of the members is positive and upbeat and camaraderie is evident.

While all chapters have similar approach to Threshold singing, McCombe and others believe that the Kenosha group exudes a special small-town connection.

“We come from diverse musical backgrounds but we are united with our sense of service to others with open hearts and empathy,” McCombe said. “

“Our rehearsals are a safe space for members to share what is going on in their lives and to support each other—and we always have birthday cake!”

On the website of the national Threshold organization, other chapter directors note a closeness of their members.

“What we do during rehearsals is build community because we need to be able to trust each other at bedside,” Robin Rose, director Seattle Threshold Singers.

“I’m very proud of the work that Jenny is doing,” said Fill. “She has strong skills, tremendous wisdom and a very loving heart.”

McCombe reports she finds the experience very rewarding, as well. “I have had the privilege to witness a group of women come together in a safe environment and watch them blossom not just as individuals but as a warm and loving community.”

Since its launch last summer, the Kenosha Lighthouse has sung at memorial services, nursing homes in Kenosha and Racine and for patients of Hospice Alliance, Pleasant Prairie.

“We as an agency love having this available for our patients,” says Rita Hagen, Hospice Alliance director. “The songs are so very comforting.”

Hagen says that staff have reported patients who were “extremely anxious” calming down considerably after a visit from the choir.

“It’s like a final gift of kindness to somebody. (The singers) don’t have to know anything about that patient to offer a final tribute of peace and kindness.”

What: A choir that sings in small groups at nursing homes and to those at the end of life.

Rehearsals: 7 to 8:30 p.m. on the first and third Wednesdays of each month.

Singing with the angels: My journey with the Kenosha Lighthouse Threshold Singers

I first heard about Threshold choirs in October of last year, shortly before the inception of the Kenosha Lighthouse Threshold Singers.

'The opportunity to grow'

Members of the Kenosha Lighthouse Threshold Singers report they find singing together and singing for the terminally ill an enriching experience.

Why sing at bedside?

In August of this year, Psychology Today cited studies of the impact of music on those who are at the end of their lives. “Music has been foun…

Angela Gordon receives a song from Sue Cooper and the rest of the Kenosha Lighthouse Threshold Singers.

Director Jennifer McCombe leads a song during rehearsal of the Kenosha Lighthouse Threshold Singers. Vera Smith is pictured at right.

Sheet music and song lyrics learned by the Kenosha Threshold choir is part of the repertoire committed to memory by Threshold chapters throughout the country. Choir member Amy Parrish in background.

While they sing, some members of the Kenosha Threshold choir hold their hands in prayerful meditation. Member Angela Gordon is pictured.