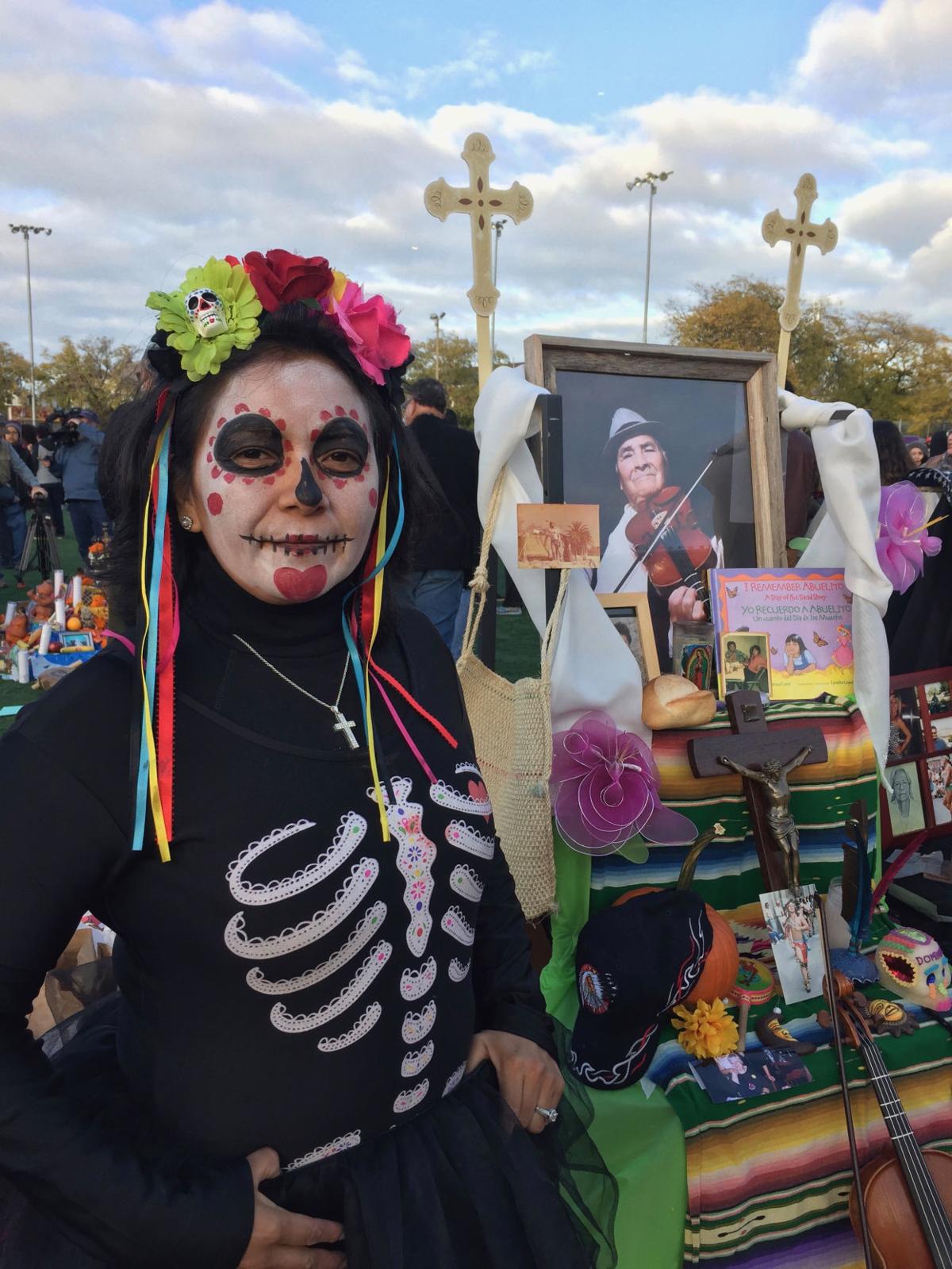 The Day of the Dead celebration in Chicago’s Pilsen neighborhood is the largest in the nation. 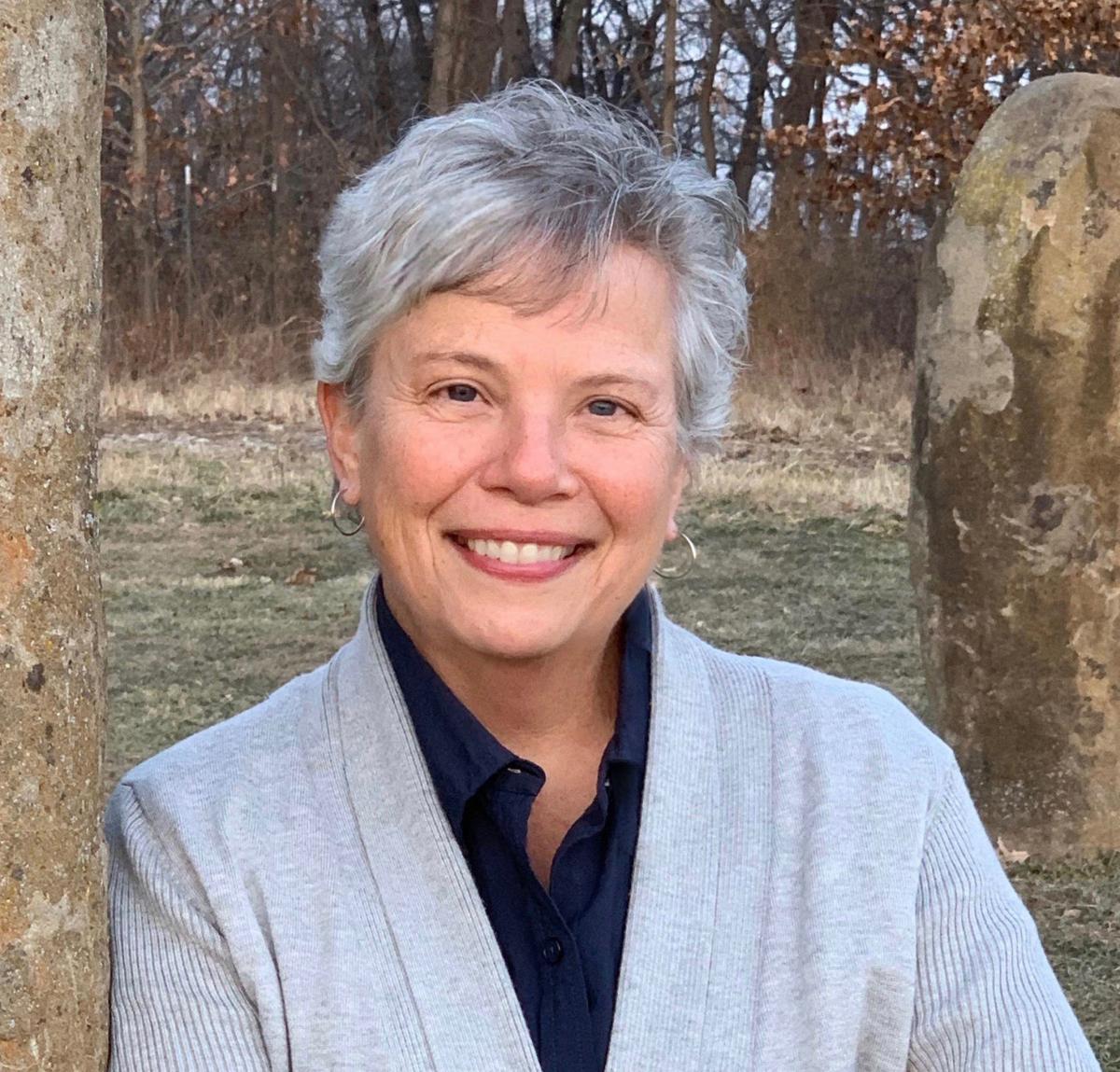 Author Lori Erickson of Iowa is an Episcopal deacon and travel writer whose writing specialty is spiritual destinations. 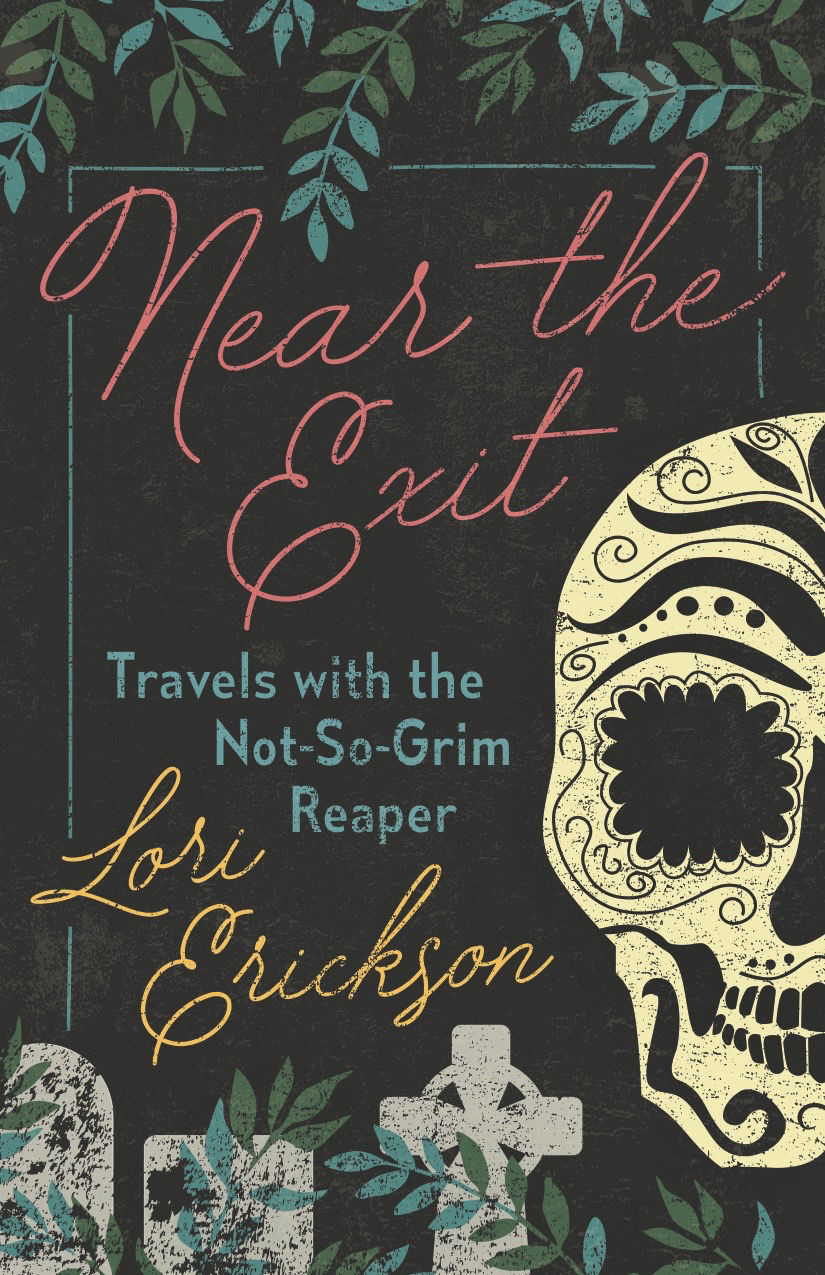 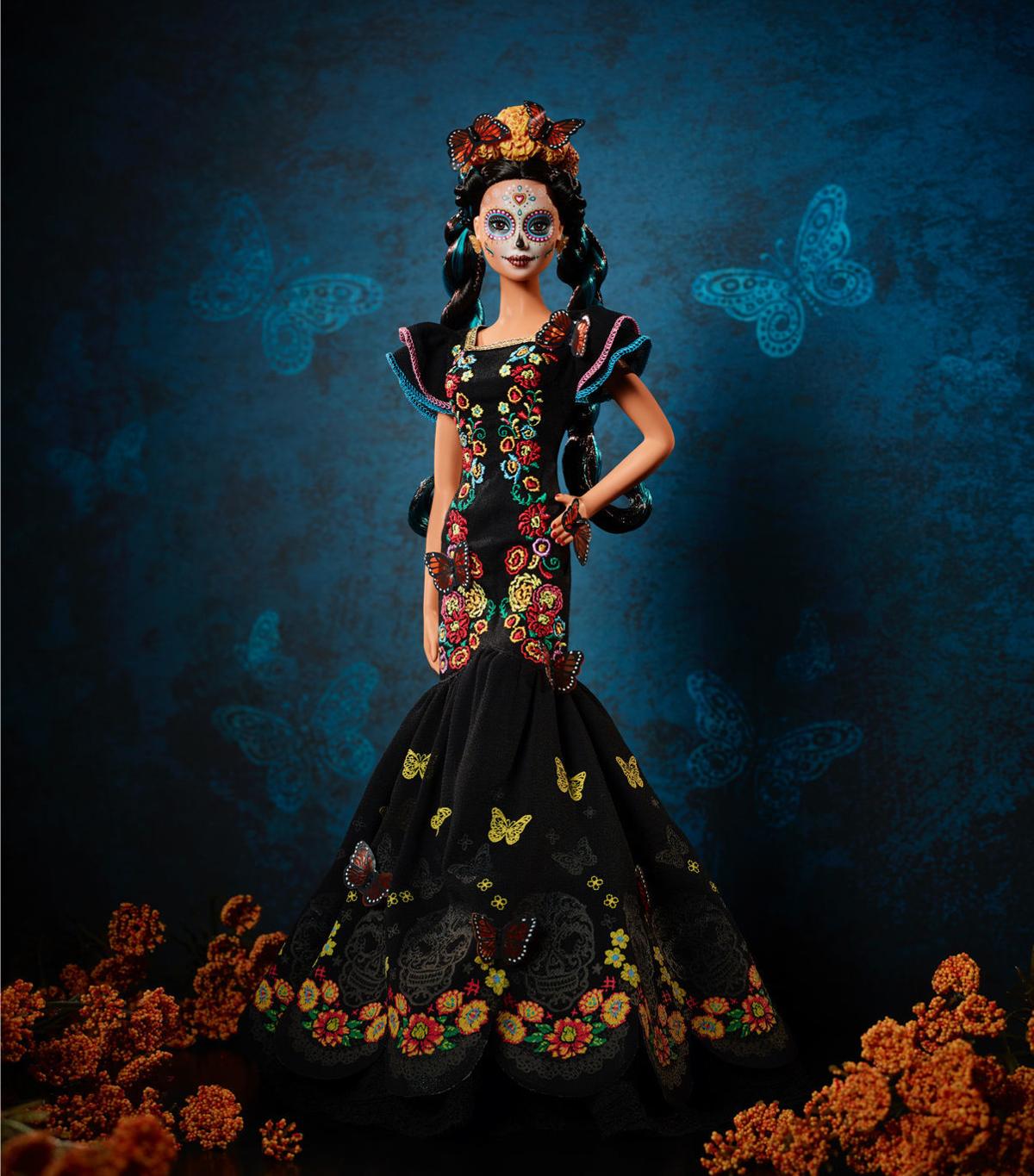 A new collectible Barbie doll, which made its debut recently, is decked out to celebrate Day of the Dead, which is Oct. 31 to Nov. 2.

First comes the shock, the tears, the numbness of emotion. Calls to far-away relatives. Awkward and heartfelt expressions of sympathy.

Temporarily all-consuming are the many practical details and decisions that accompany a loved one’s death. But after the eulogy, funeral meal and estate settlement, then what?

We tend to rerun tender memories internally and bury the storytelling with the loved one who has died. Friends tiptoe to avoid upsetting us. Anniversaries and birthdays pass too quietly.

That’s not the only way to deal with mortality.

The approach of Halloween intersects with Dia de los Muertos — Day of the Dead, Oct. 31 to Nov. 2, a time of celebration in Mexico. Families set up altars, marigolds and offerings of food to welcome back the spirit of their dearly departed. It’s a party to which the dead are invited, year after year.

My friend and colleague Lori Erickson of Iowa beautifully describes these festive gatherings in a part of her new book, “Near the Exit: Travels with the Not-So-Grim Reaper” ($17, Westminster John Knox Press).

Her prologue focus is the National Museum of Mexican Art in Chicago’s Pilsen neighborhood. No other Day of the Dead celebration in our nation is bigger.

Strangers ask about items on altars and hear funny to poignant stories. Friends share memories and laughs; many wear skeleton designs in clothing, accessories and makeup.

“I’d been drawn here, I realized, because I needed a tutorial in death,” Erickson writes. “I didn’t need to know about the stages of grief or how to make a living will; I needed to know how to live with death.

“This festival blending death, whimsy and remembrance was a beginning. It made me want to learn more about what it meant to invite the dead to come back, and then bid them leave again.”

Mattel, the toy company, recently recognized the importance of the occasion by introducing a Day of the Dead Barbie doll, which wears a crown of marigolds and butterflies. A skull is painted on the face, and the body is covered with a black, embroidered dress.

List price for the collectible was $75, but prices online exceed that by far.

In Wisconsin, Day of the Dead celebrations pop up at expected and unusual places. For example:

Day of the Dead activities are sporadic until Nov. 22 at United Community Center, 1028 S. Ninth St., Milwaukee. Inside is Latino Arts, which on Tuesday presents an exhibit of altars made by local artists and others. Admission is free. unitedcc.org, latinoartsinc.org

Paint your own clay skull keepsake at Longshot Vinyl Lounge, 324 Sixth St., Racine, from 7-9 p.m. Saturday. Dress for Day of the Dead, bring photos or write notes of remembrance on a community altar. Tamales will be sold, and local art will be on display. Admission is by donation. longshotvinyl.com

Day of the Dead tarot card readings and tattoos happen from noon to 9 p.m. Nov. 1 at I Ov Thee Dragon Tattoo and Body Piercing Studio, 614 Sixth St., Racine. Get a $5 discount on a $20 psychic reading when showing up in a costume. facebook.com/waxinggibboustarot

A Day of the Dead Fiesta from 4:30-8:30 p.m. Nov. 1 at the University of Wisconsin’s School of Human Ecology, 1300 Linden Drive, Madison, includes altar boxes, food, music and dancing. Admission is free. lavidaylosmuertos.com

Lincoln-Tallman House, 440 N. Jackson St., Janesville, hosts a traditional Day of the Dead party at the property’s carriage house from 7-10 p.m. Nov. 1. Dress in bright colors and bring a reminder (photo or possession) of a deceased loved one. Traditional Mexican appetizers and entertainment are planned. Admission is $25, and proceeds benefit the Latino Service Providers Coalition. rchs.us

The small community of Brodhead in Green County celebrates Day of the Dead with a chili cook-off, parade, run-walk and treats for children between noon to 6 p.m. Nov. 2 at the downtown town square. Admission is free. brodheadchamber.com

Erickson was compelled to write “Near the Exit” after the sudden death of a brother and the admission of her mother, a dementia patient, to a nursing home. The two events happened within one week.

Her book ponders travel that has taken Erickson as far away as Egypt and as close to home as the local hospice. She is an Episcopal deacon whose writing pays attention to Milwaukee’s Forest Home Cemetery, where beer barons are buried, as well as the Maori people of New Zealand and St. Peter’s Square at the Vatican.

Crestone, Colo., is home to the nation’s only nondenominational, open-air cremation grounds. “Near the Exit” is where to learn about it in an even-handed way.

Regardless of where Erickson roams and contemplates, a sense of awe and humor prevail. So don’t expect a preachy, definitive approach to how to go about the business of living or dying — and you don’t need to overthink it.

“You can learn about life and death just by seeing the fallen trees returning to earth and the mushrooms growing after a rain,” the author was told, in Crestone. “The earth is always willing to teach us, if we just pay attention.”

Heading to Iowa? Erickson leads a Day of the Dead Walk at Harvest Preserve, 1645 N. Scott Blvd., Iowa City, at 2 p.m. Nov. 2. Harvest Preserve is described as the area’s own version of Stonehenge, the prehistoric formation of stones in England. harvestpreserve.org

What’s weird and wonderful to you?

Reminder: A new edition of Atlas Obscura has been published, and atlasobscura.com describes thousands of additional destinations that are unique and lesser known, throughout the world.

What else should be added? Tell me about the truly weird and wonderful that you’ve seen — in 50 words or less — for a chance to receive a copy of Atlas Obscura. Your deadline is Oct. 31, and whatever you write about should be open to the public. Send your note to mary@roadstraveled.com, with “atlas obscura” in the subject line.

Weekly “Roads Traveled” columns began in 2002. These syndicated articles, archived at www.roadstraveled.com, are the result of anonymous travel, independent travel, press trips and travel journalism conferences. What we choose to cover is not contingent on subsidized or complimentary travel.

The Day of the Dead celebration in Chicago’s Pilsen neighborhood is the largest in the nation.

Author Lori Erickson of Iowa is an Episcopal deacon and travel writer whose writing specialty is spiritual destinations.

A new collectible Barbie doll, which made its debut recently, is decked out to celebrate Day of the Dead, which is Oct. 31 to Nov. 2.