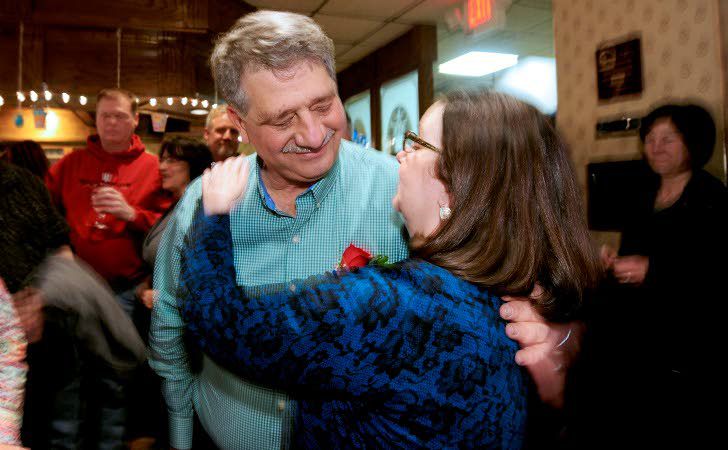 Linda Antaramian congratulates her husband John after he won the mayoral election. 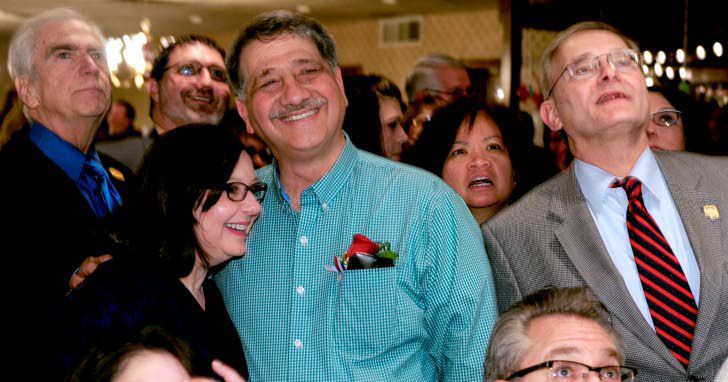 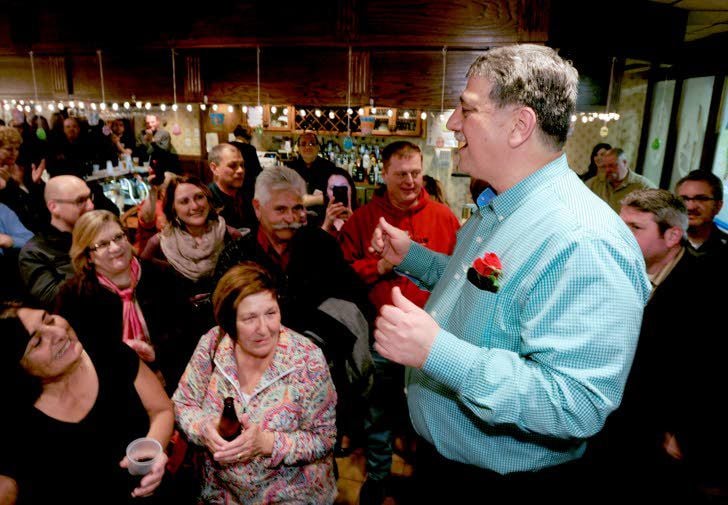 John Antaramian gives his victory speech in a room packed with supporters and other candidates Tuesday night in the basement of the Italian American Club. 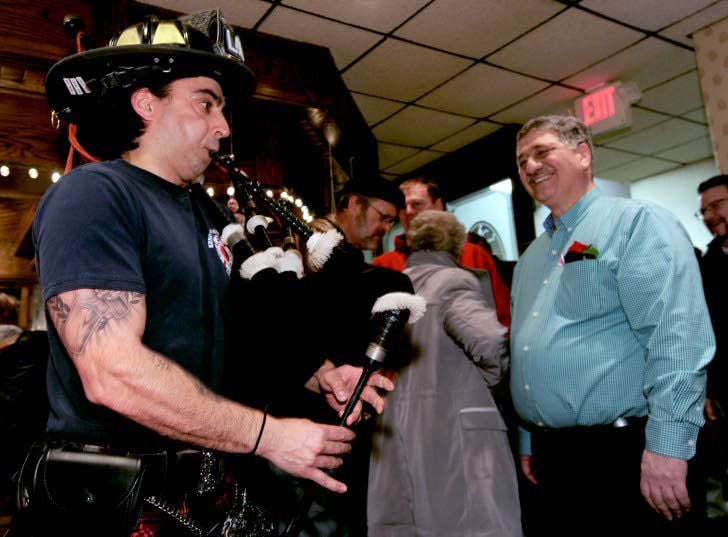 Joey Sielski performs on the bagpipes before John Antaramian declares victory in the mayoral election Tuesday night at the Italian American Club. 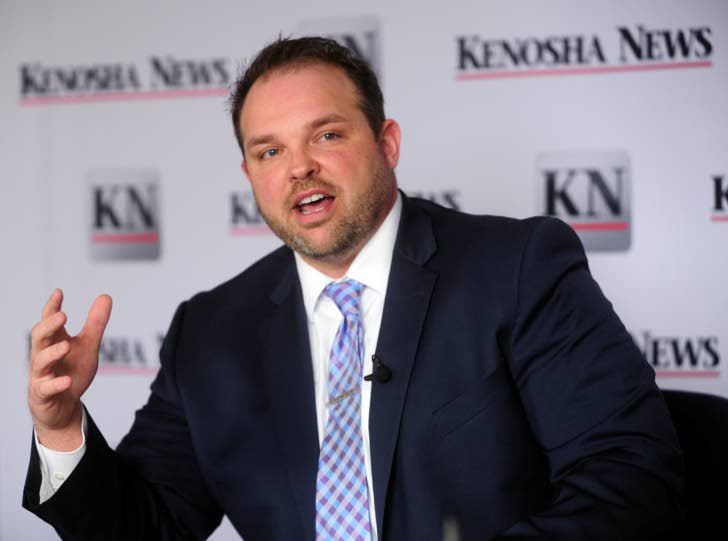 Supporters, including a virtual who’s-who of past and present aldermen, city department heads, business owners and a wide cross section of Kenosha’s electorate, were on hand at the Italian American Club to celebrate his landslide win over one-term Ald. Bob Johnson.

When he took to the microphone at 9 p.m. to thank supporters and campaign workers, unofficial results showed Antaramian already outpacing Johnson by a 62 percent to 38 percent margin. When all 92 polling places had reported a short time later, the gap had widened slightly in Antaramian’s favor.

“We have a lot of opportunities in Kenosha,” Antaramian said. “I can’t wait to start working on them. ... This is the beginning. We’re at the front end.”

A beaming Antaramian noted Kenosha County Executive Jim Kreuser’s presence at the event, saying he looked forward to working with the county as well as the town of Paris and village of Somers — an allusion to the proposed intergovernmental agreement between those municipalities.

In an interview afterward, Antaramian said, “I think what the election tells people is that people are looking for where we can go, what types of things we can get done, projects we can do focusing on the future. We stayed away from the negative campaigning because I don’t believe in that.”

Back in the saddleAntaramian said he has no trepidation of being rusty after staying out of electoral politics the past eight years.

Altogether, Antaramian had served the city for 26 years, including 10 as a representative in the state Assembly, before he was elected mayor in 1992. He chose not to seek re-election in 2008.

Sitting on the sidelines the past eight years, enabled him “to see what happens when communities aren’t aggressive in redevelopment. It doesn’t happen,” Antaramian said. “There are only two directions: forward and back. There is no in-between.”

He said one of the first things he’ll look at as mayor will be the boundary agreement between Somers and Paris that would prevent the city’s future expansion west of Interstate 94. The agreement is scheduled for public hearing Thursday. City officials have said they weren’t invited to participate in the discussions with county, Paris and Somers officials.

Taking it all in Monday night was Anataramian’s wife, Linda.

She said after leaving City Hall, Antaramian never stopped caring about the city that has been his lifelong home.

“He cared so much. He always watched what was happening,” Linda Antaramian said. “He really needed to get back in there.”

Johnson concedesIn conceding to Antaramian, Johnson said, “The city has picked their next mayor, and now we have to take off our (candidate) jerseys and put on our city of Kenosha jerseys.”

When he threw his hat in the ring for mayor, Johnson filed not to run for re-election as an alderman.

“You never say never to another run, but now my focus will be on helping the City Council and the mayor move the city forward,” he said.

“I want to say thank you to everyone for their support,” Johnson added. “I think we performed very well.”

“It’s a commanding win,” said Barca, who served in the Legislature with Antaramian. “It’s above 60 percent. In a presidential race, that would be a mandate. I look forward to working with him and the new administration. And I think we’ll get some good things done.”

He added that Antaramian’s win “shows people have confidence in him and liked the job he did as mayor.”

Ali'jah J. Larrue, 18, was arrested at about 11:20 p.m. Friday and booked into the Dane County Jail on tentative charges of two counts of party to a crime of first-degree intentional homicide, UW Police said.

A person fleeing Kenosha Police was killed in a crash with another vehicle Wednesday night.

Update: Turned away because of Tylenol, Somers woman votes from car; 'they are not going to stop me from voting'

Four residents and seven workers at Oakwood Village’s nursing home on Madison’s West Side have tested positive for COVID-19, marking the first known cluster of cases at a nursing home in Dane County.

Linda Antaramian congratulates her husband John after he won the mayoral election.

John Antaramian gives his victory speech in a room packed with supporters and other candidates Tuesday night in the basement of the Italian American Club.

Joey Sielski performs on the bagpipes before John Antaramian declares victory in the mayoral election Tuesday night at the Italian American Club.