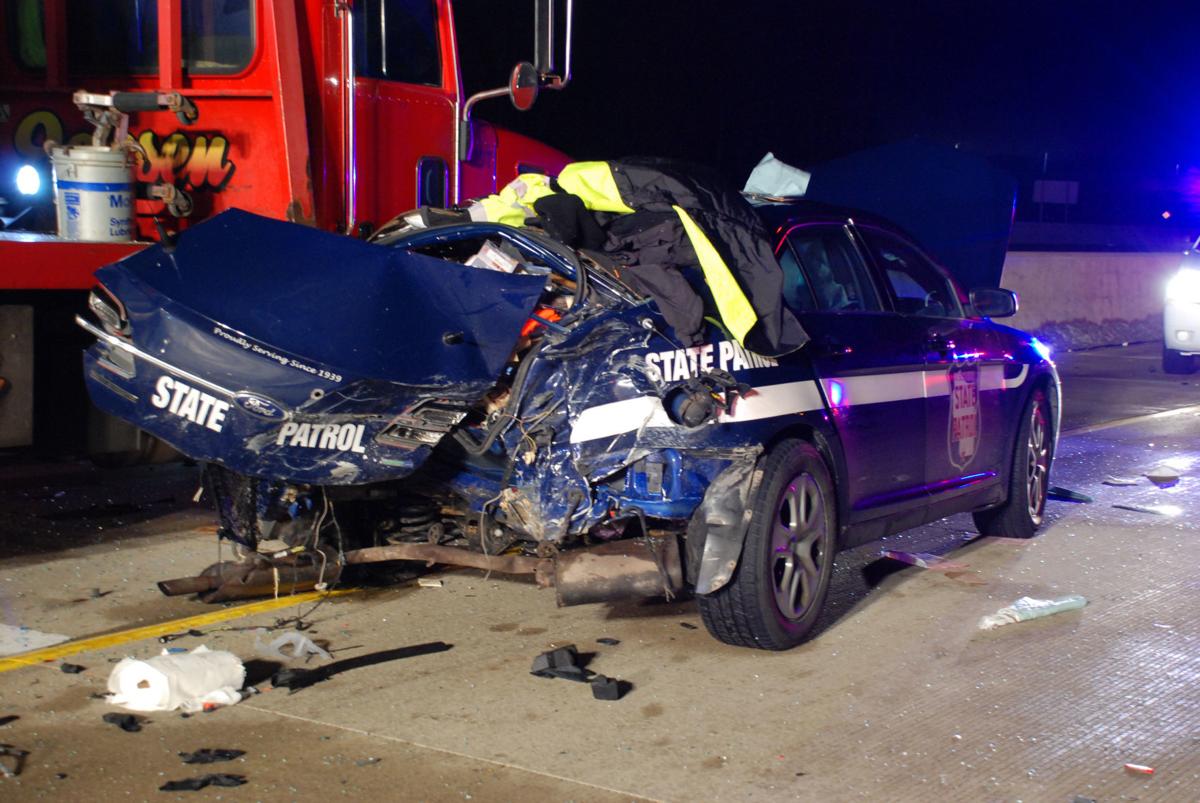 These are the remains of a Wisconsin State Patrol cruiser after it was rear-ended by a suspected impaired driver Sunday evening along I-94 just north of the Wisconsin-Illinois border.

A Fond du Lac woman is alleged to have been drunk with three children in the car when she crashed into a state trooper’s cruiser on Interstate 94 on Sunday.

Yessica Trevino, 31, was charged Friday with a series of felonies for the crash, which occurred at 7:46 p.m. in the 12000 block of Interstate 94 just north of the Wisconsin-Illinois border. She is being held on $15,000 bond.

According to the criminal complaint, at the time of the crash authorities were on the scene of an accident between a semi truck and a pickup truck on the interstate, with a Kenosha County Sheriff’s Department deputy and a Wisconsin State Patrol trooper both blocking a traffic lane with emergency lights on and a tow truck removing the pickup truck.

The complaint states that the deputy saw a black sedan pass his squad car and then lose control, crashing into the rear of the state trooper’s cruiser at a high rate of speed. The cruiser was then pushed into the tow truck.

The deputy found two children in the back seat of the sedan, one a 1-year-old in an overturned car seat that had not been secured properly. A 3-year-old was lying on top of the overturned car seat, crying. An 11-year-old child was outside the car with a deep laceration on his face. He was crying and repeating, “This has to be a dream.”

The other two children were bruised, but did not have significant injuries.

The driver, later identified as Trevino, was unconscious in the front seat.

The trooper and the tow truck driver were both treated at a local hospital.

According to the criminal complaint, empty alcohol cans were found in the sedan, as was a pill container containing marijuana.

The complaint states that Trevino told police she had been traveling from her home to a family member’s home in Illinois when the crash occurred. The complaint states that she admitted drinking wine before driving, but denied that the empty cans in the vehicle belonged to her and said she had not been drinking them while driving. She said she had not been smoking marijuana.

“She stated that she believes her children were all seatbelted in the vehicle, but also stated that she knew that the children sometimes did not wear their seat belts,” the complaint states.

Although a blood test was taken from Trevino to check for alcohol, the results were not included in the criminal complaint. It states that the deputy believed “based on his experience that it would be uncommon for a sober driver to almost hit one squad car and then hit a second emergency vehicle when they both have emergency lights activated.”

Trevino was charged with knowingly operating a motor vehicle without a valid license-cause great bodily harm, possession of THC, injury by intoxicated use of vehicle, and three counts of operating while intoxicated causing injury-first offense, with a minor child in vehicle.

These are the remains of a Wisconsin State Patrol cruiser after it was rear-ended by a suspected impaired driver Sunday evening along I-94 just north of the Wisconsin-Illinois border.