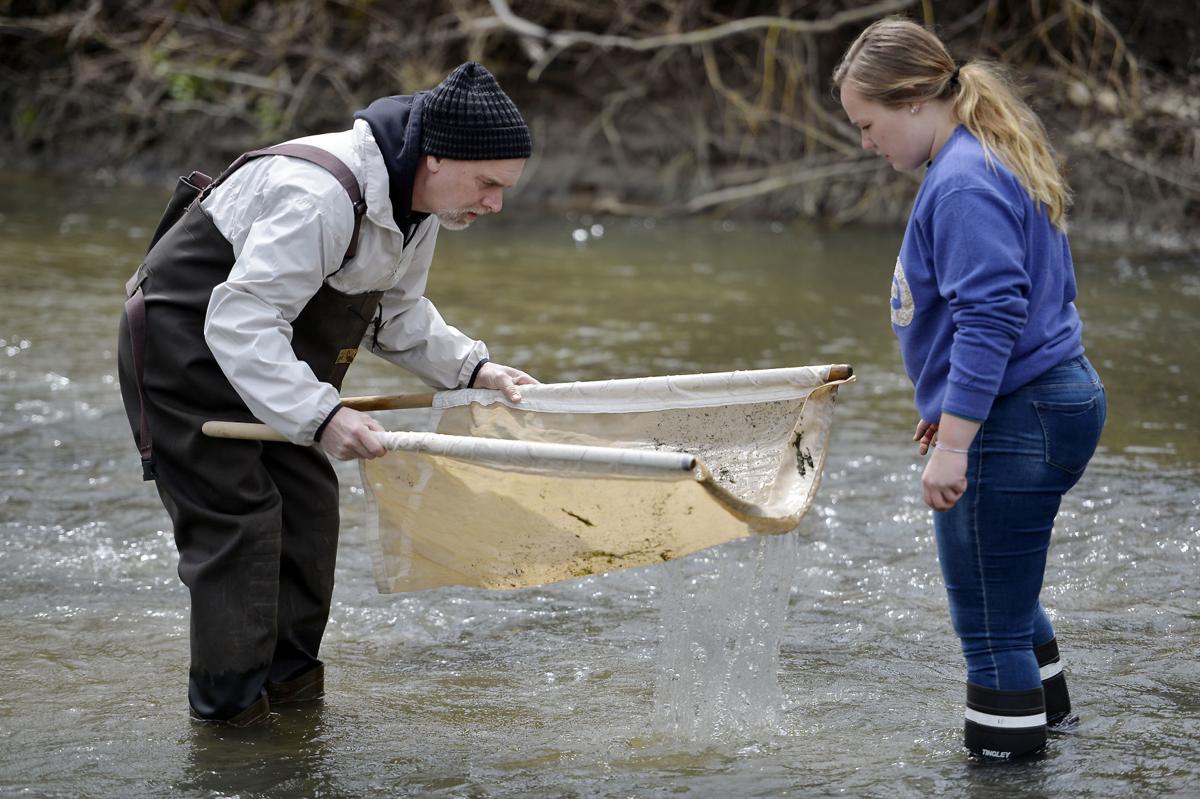 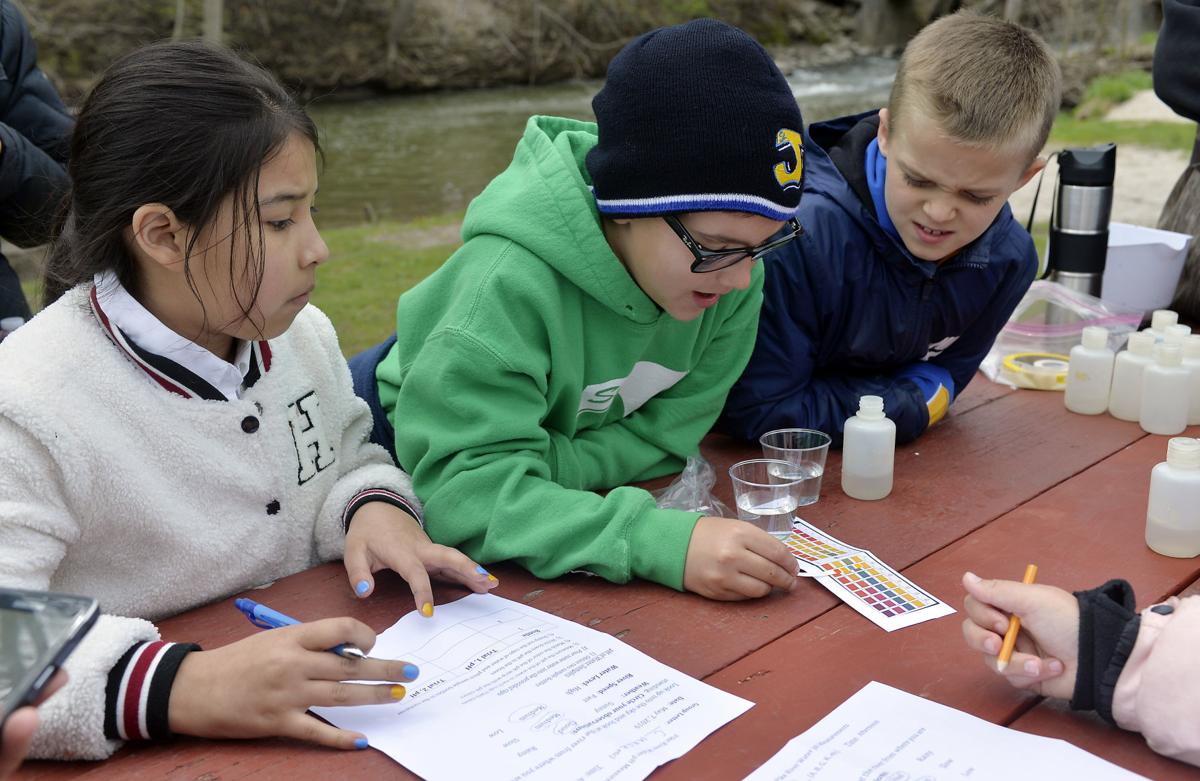 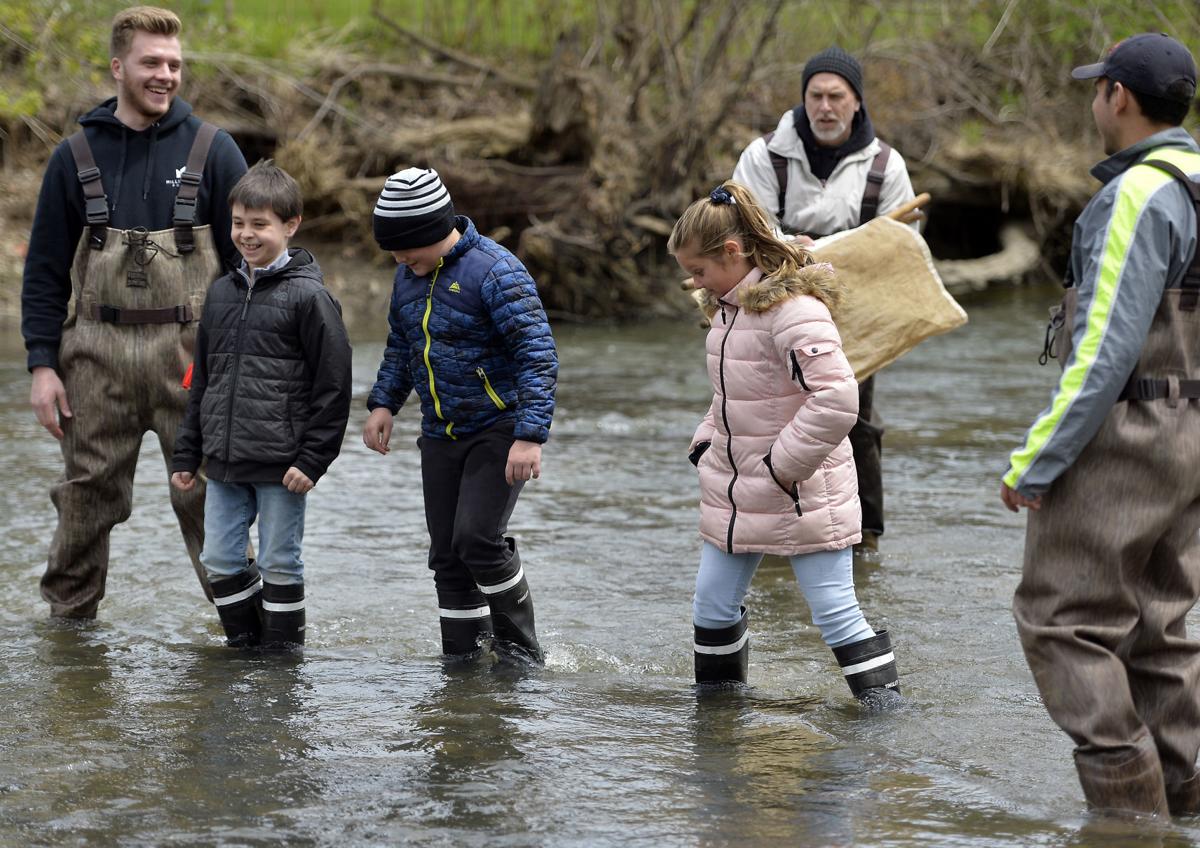 What’s in the water? 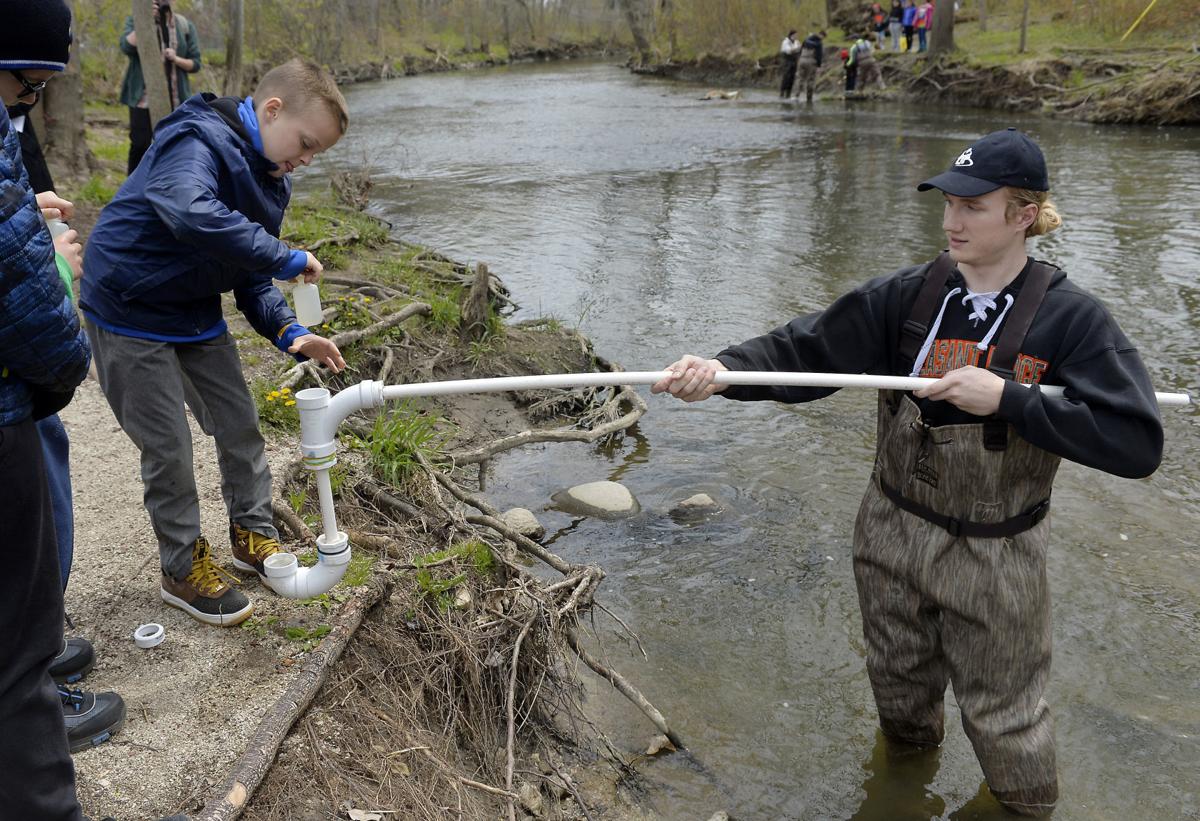 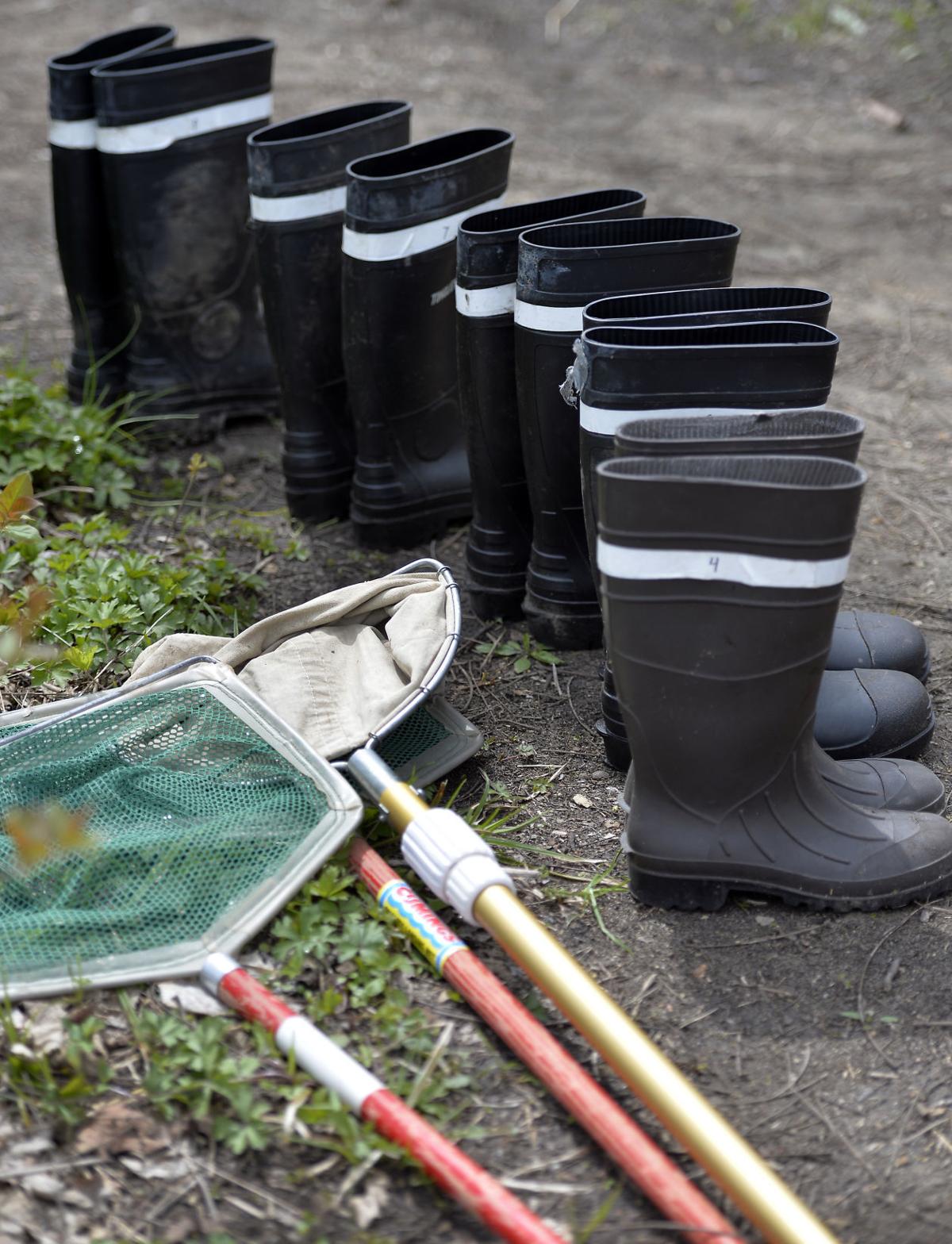 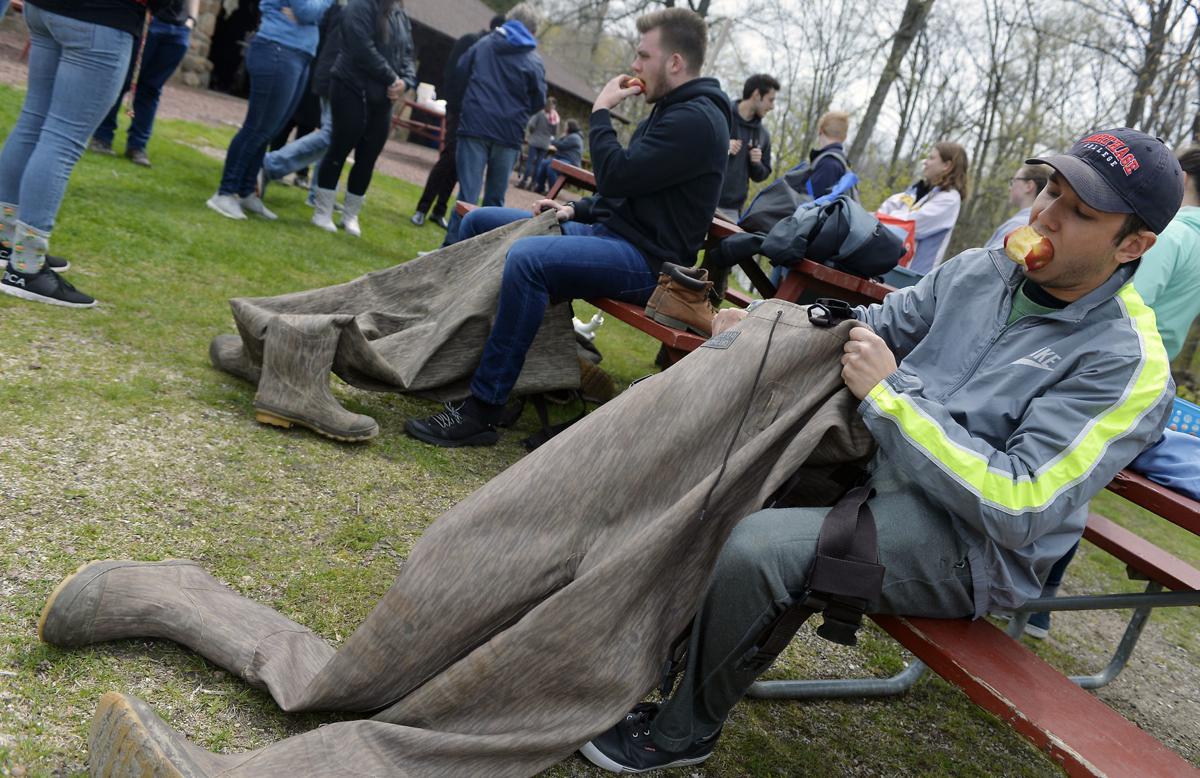 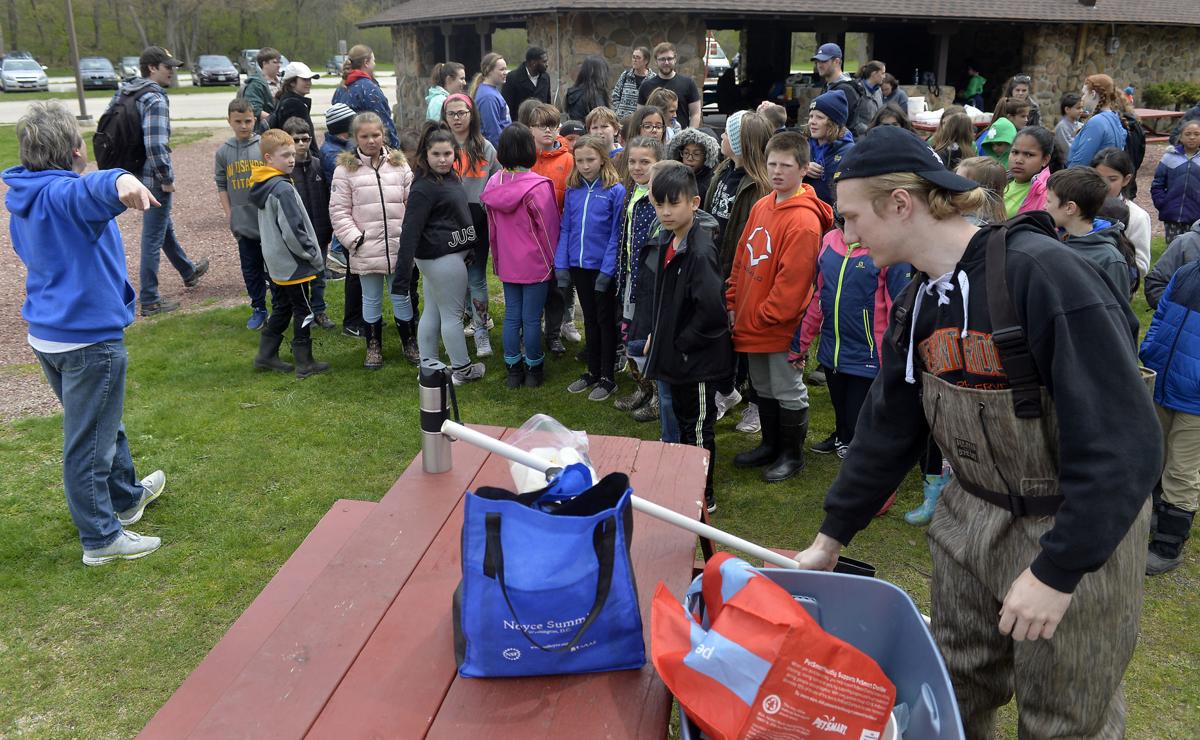 SOMERS — On a brisk, cloudy spring day, St. Joseph fourth-graders left the traditional classroom behind to learn in a different environment — the Pike River in Petrifying Springs Park.

On Tuesday, they became “citizen scientists,” led by Carthage College science faculty and students, who guided them through water testing, bug identification and hiking tours to observe and learn about the emerging flora and fauna.

The river was rushing Tuesday as Cal Green, a Carthage chemistry student, waded in thigh-deep water, filling sample bottles for the fourth-graders to test.

The young students — including Paddy Davidson, Charlie Guttormsen, Gracie Campos, Andrew DeVito, Joey Santelli and Scarlett Harrington — got to work quickly with pH testing sticks and four-color charts to identify whether their samples were within normal water quality ranges.

Carthage student Brady Bresnahan reminded them not to touch the color portion of the stick to keep it free from skin oils that could contaminate the sample.

They sampled the water four times, with most of their samples showing pH levels of 7 to 8, which are within normal range.

“It tells us that it’s a little basic, but still good,” said Campos.

The importance of water

She said her aim is to help younger students understand the importance of the local waters and how they connect to life all around them.

Blaine's lessons with the classes emphasized the health of the river and efforts to protect it.

Kaeppeler called it a “fabulous partnership” in which she and other teachers at St. Joseph learn, too.

“I’m learning right along with them. I’m not going to lie. It’s been great. The (students) have had all this practice and today, we’re in the field,” she said.

Before coming to the park on Tuesday, the fourth-graders practiced in class using pH kits, which gauge the levels of acidity or salinity.

The students also received worksheets to help them identify “macroinvertebrates,” or creatures that live in the Pike, several of which can be seen with or without the use of a magnifying glass.

Students then extracted samples and piped them into ice cube trays where they counted the creatures.

The bugs, as Blaine calls them, are grouped into four categories based on their sensitivity to pollution.

For example, water snipe larva, which resemble legless caterpillars with frilly antennae, are among the most pollution sensitive, while midge and tubifex worms are the most tolerant.

The students are then given a formula to calculate the populations. The data will later be analyzed.

Carthage biology professor Scott Hegrenes, who used a screen to capture the invertebrates, waded in a shallow end of the river with the students.

In the spring, he said, many of the bugs are still in the larval stage and feed underwater until becoming adults.

According to Hegrenes, the abundance or scarcity of the creatures can tell scientists a lot about the health of the river.

“If all that we caught were these red-colored midges, that would suggest that the stream is low in oxygen,” he said. “We’re sampling this very fast-moving water, so we’re not finding a lot of those blood worms, but we’re finding other things, like caddisfly.”

Fourth-graders Logan DiVito, Logan Mendlik and Macie Jenkins, supervised by Carthage senior Mike Regotti, who is studying chemistry and physics, discovered larvae from two of the four categories, including Dobson flies and water snipes, which are pollution sensitive, and midges and tubifexes, which are pollution tolerant.

The students observed a midge larva eating one of the snipes, which cut into their sample size, they said.

“I think it’s interesting because I never knew there was such different types of larva or these weird bugs that I’ve never heard of,” said Macie. “It’s pretty cool that you learn this stuff even at a young age.

"I was thinking I’d learn this in high school and middle school, and I never knew some of these bugs and worms were sensitive or they could live in polluted waters.”

And that’s exactly what Blaine wants them to know.

What’s in the water?