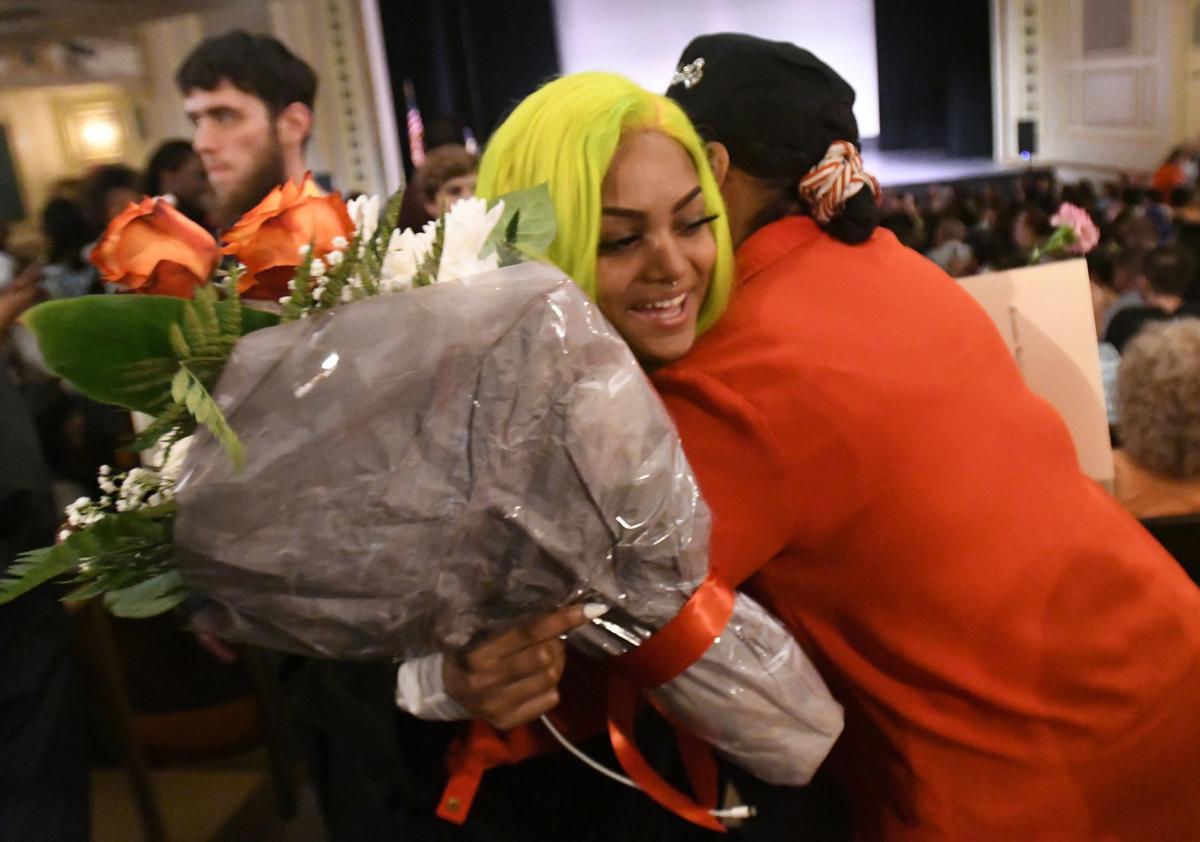 Azia Allen gets flowers and a hug from her grandmother, Marie Farrakhan. 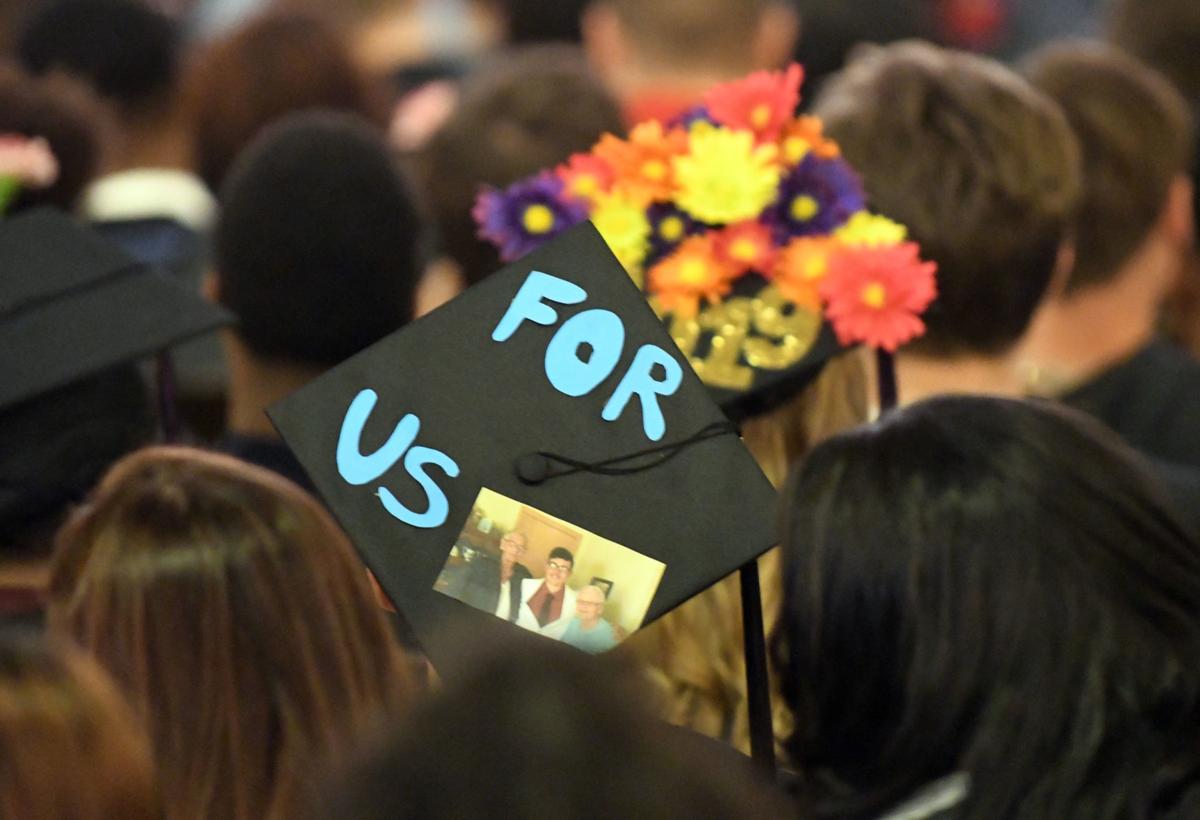 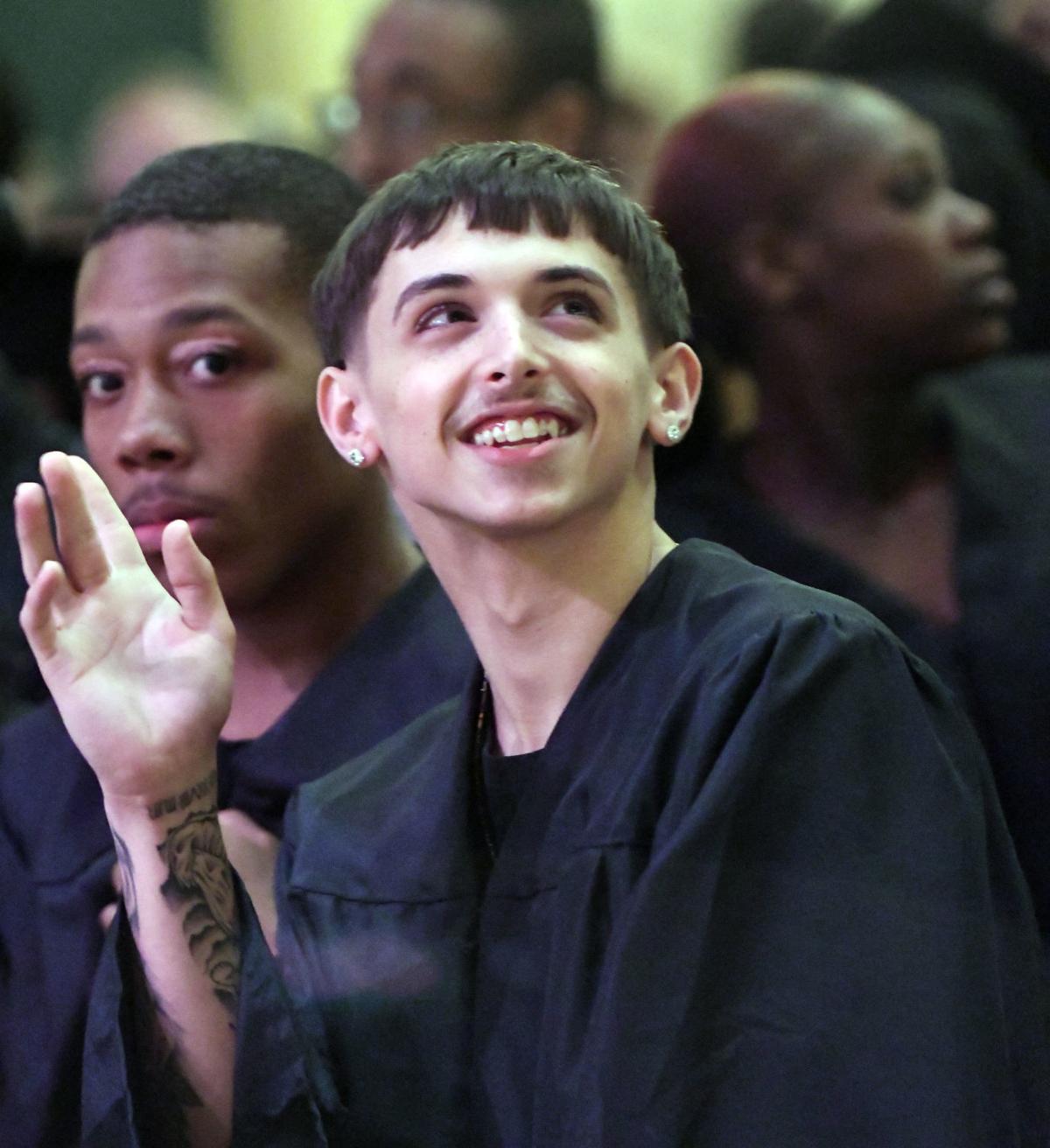 Graduate Franklin Clark waves at people in the balcony. 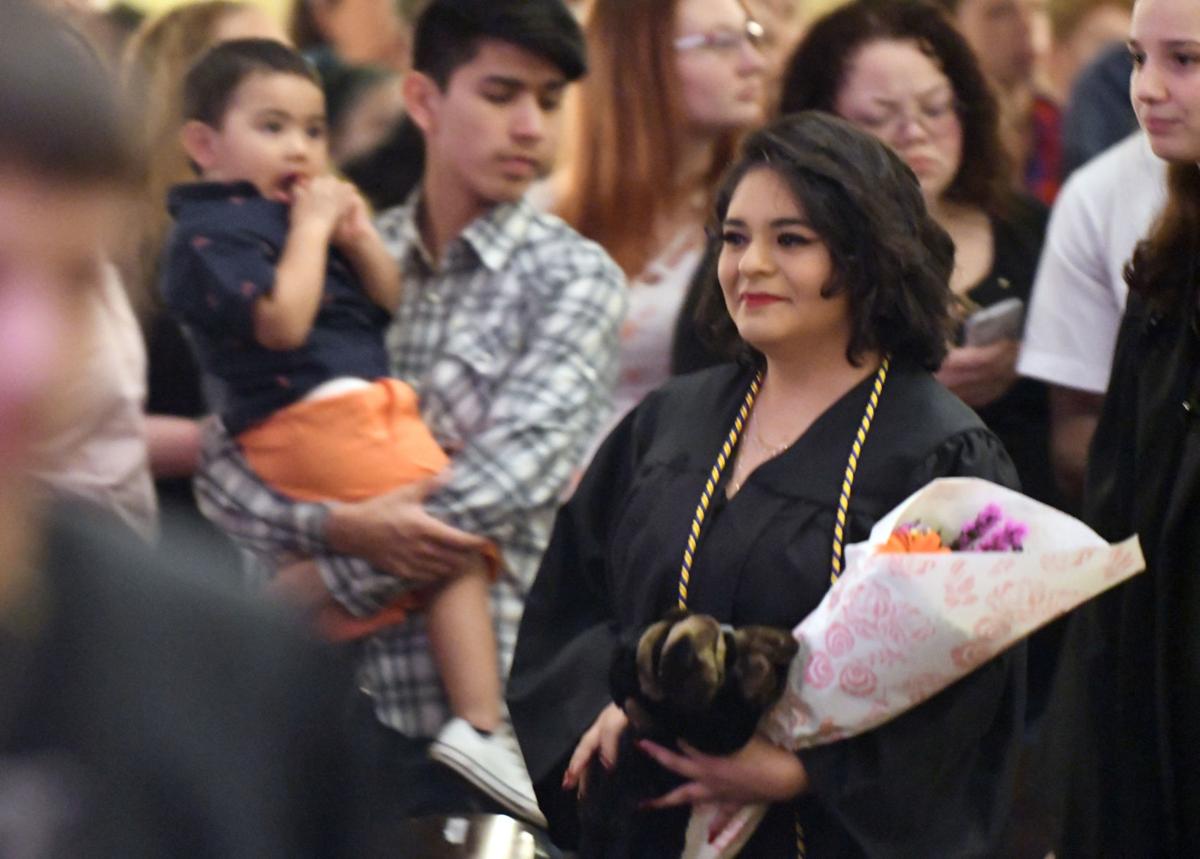 Maya Perez walks in with flowers and a stuffed animal. 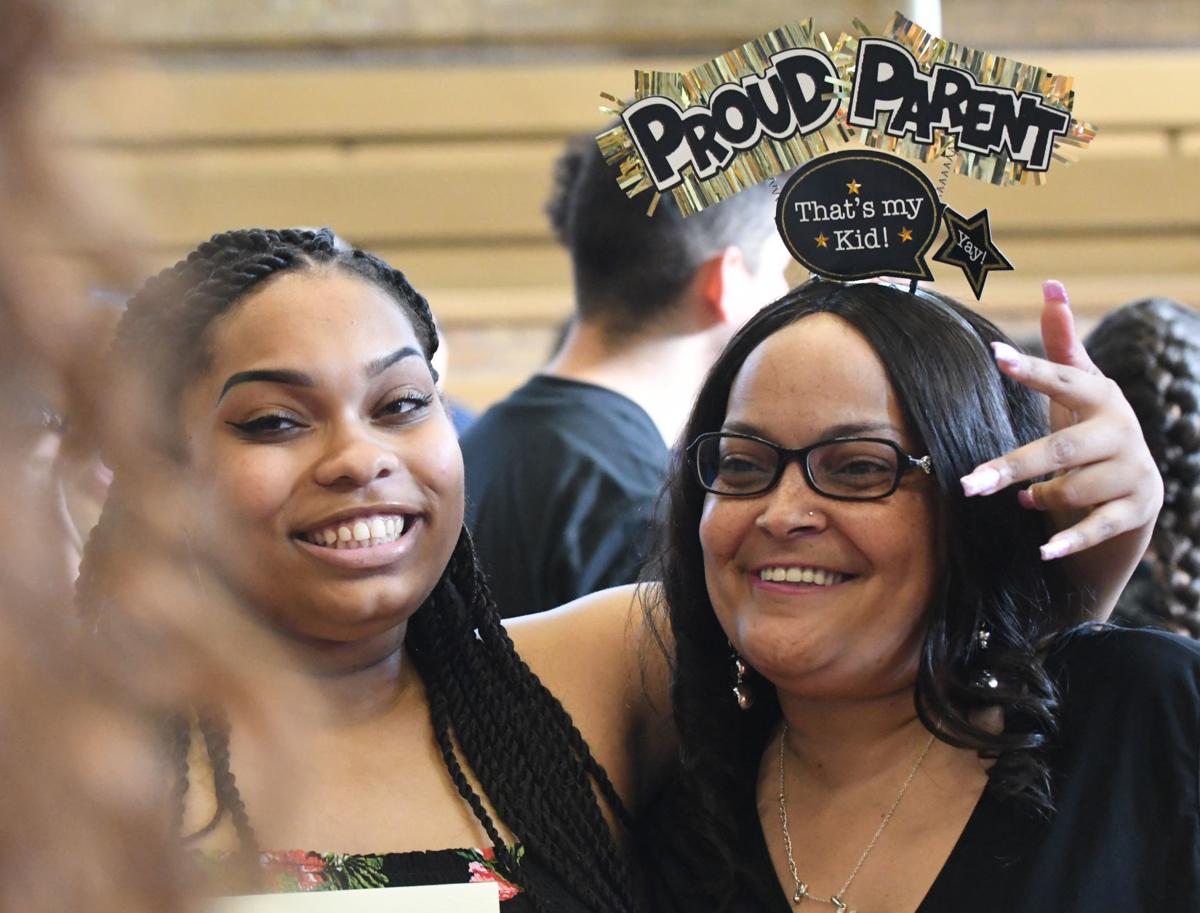 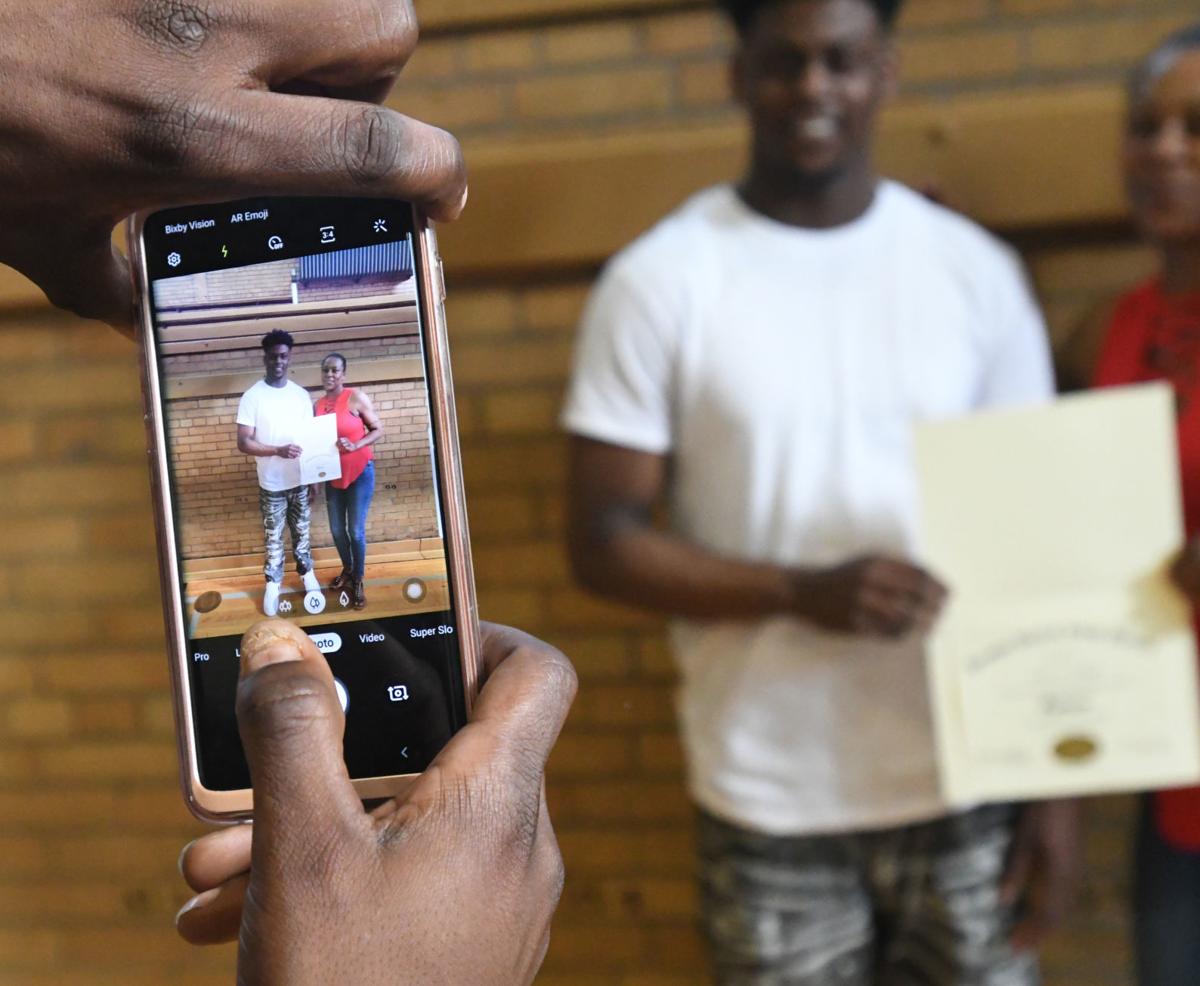 Samuel Williams and his mother, Tiffiney Tyler, pose for a photo after graduation. 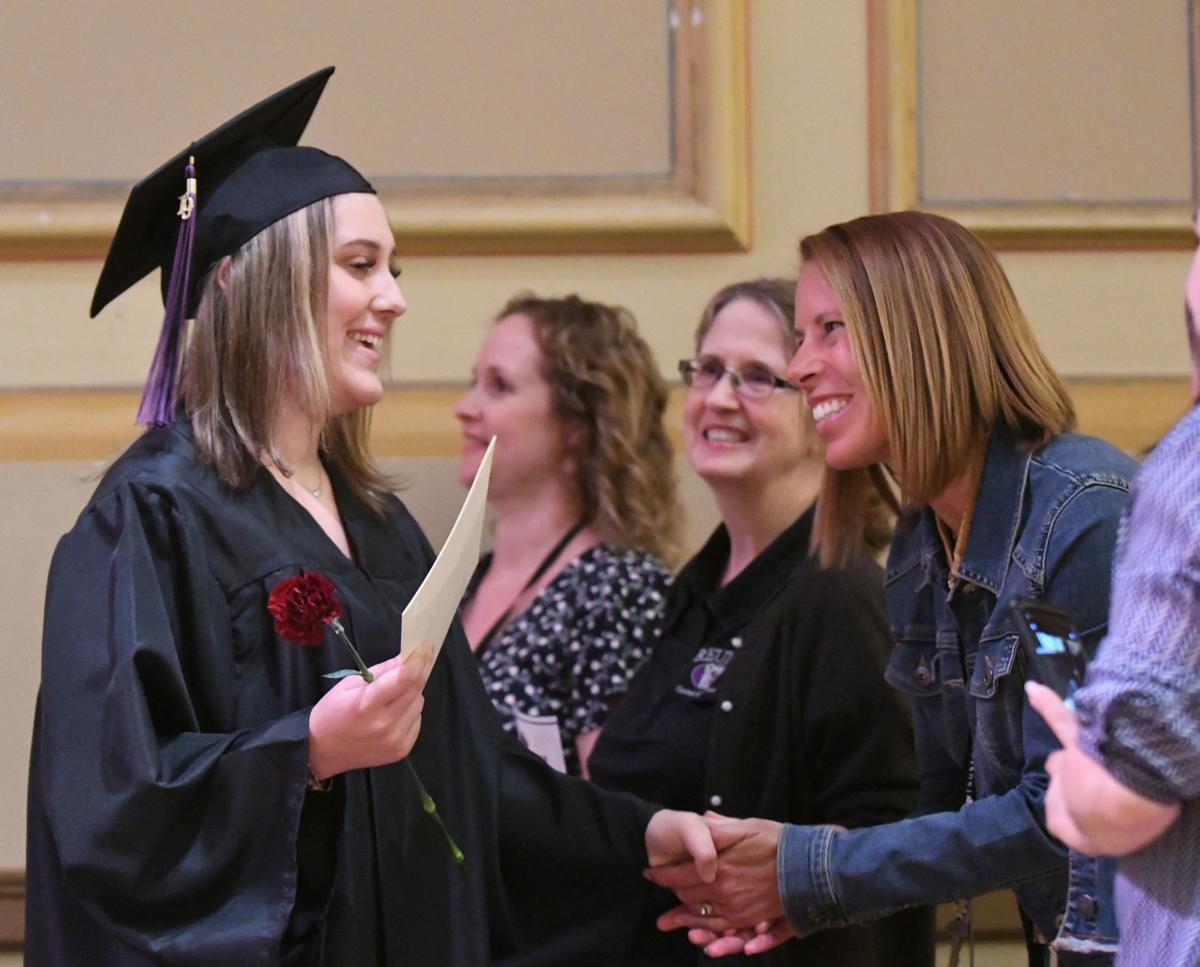 Sarah Schwer is congratulated by faculty members after receiving her diploma. 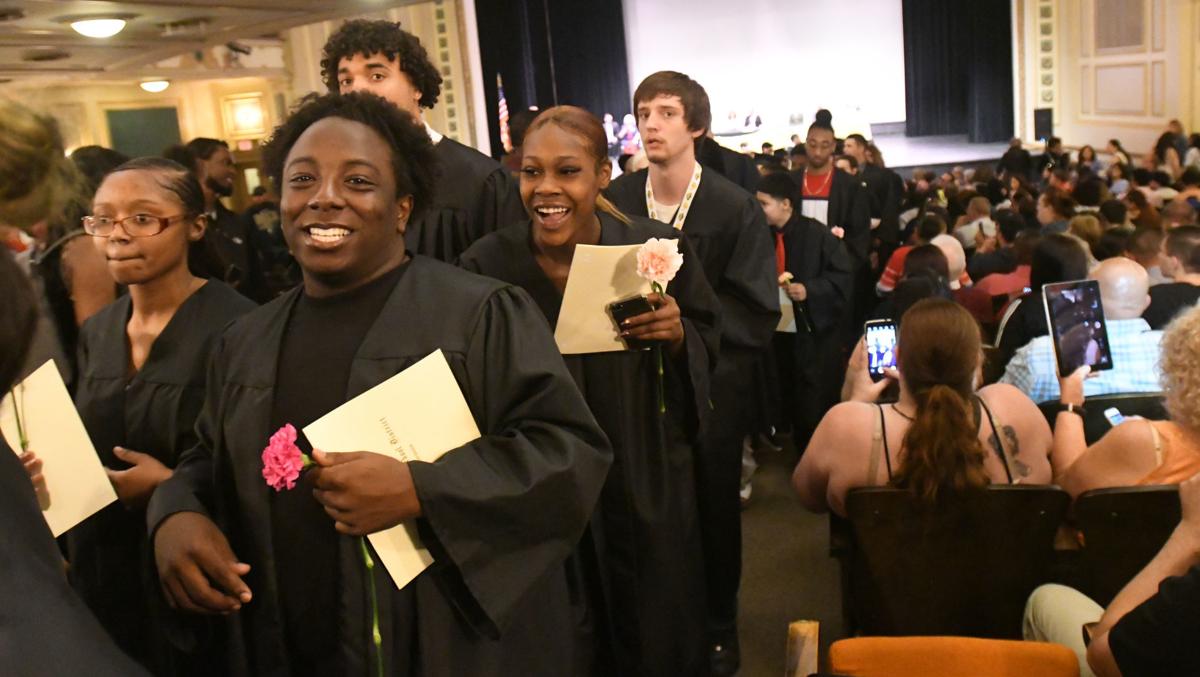 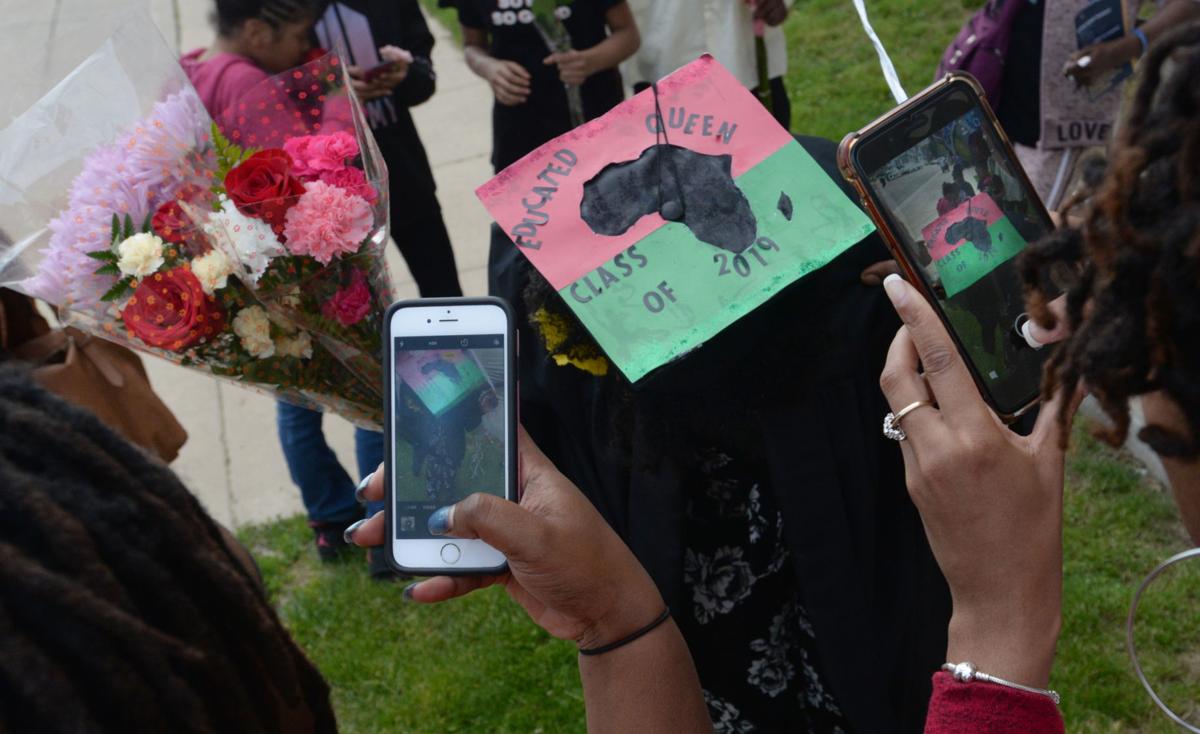 Kayla Norman proclaims herself an educated queen of 2019 as she poses for photos of her cap.

Tony Casper had some advice for the students in Kenosha Unified’s ITED program’s Class of 2019 as they sat with peers from different high schools in the district waiting to receive diplomas during graduation exercises held at the Ralph J. Houghton Performance Center Tuesday night.

The assistant principal at Indian Trail High School and Academy who delivered the commencement address told them that they must know who their real friends are, find the things that bring them joy, persist with the grit that has gotten them to graduation day and to heed those who’ve hassled them.

He said their true friends aren’t the people who take out their cell phones while “you’re doing something stupid” or fighting with them.

“Your real friends are the ones that want to fight for your future. They’re the ones who pull you back when you are making the bad choices in your life,” Casper said. “So, advice No. 1 is to fill your life with people like that.”

Casper said that turning to drugs, alcohol and other vices that destroy lives isn’t the answer to filling the void they may encounter.

“So, I ask you to fill that emptiness with something positive — a job, family, a hobby or something you’re interested in,” he said. “These are things that we can hold on to when it seems life is turned upside down.”

He said they had the “grit” to overcome the obstacles that has brought them this far.

Quoting the words of Frederick Douglass, he said: “If there is no struggle, there is no progress.”

“You have struggled. You have shown progress,” he said.

Those who’ve “hassled” them to go to school, finish homework, do their best and to keep going are the ones who “cared about you the most.”

Tuesday’s commencement ceremony was not the traditional high school graduation, but recognized students who, for a variety of reasons, were not able to meet credit requirements to graduate with their cohorts. Unified’s alternative graduation program issues diplomas to those students meeting all graduation requirements while taking and passing a series of assessments known as the Iowa Tests of Educational Development. The program honored 192 graduates.

Among the graduates was Golden Jenkins, of Kenosha, who received her diploma as a student at Reuther. Jenkins said she had to drop out of school her junior year to help care for her mother who suffered a stroke and later died.

“I’m doing this for her, to show her that her kid did achieve something and it’s going to be fine,” said Jenkins, who is currently attending Gateway Technical College studying nursing. “(My mom) would’ve been overjoyed knowing that I’d graduated.”

Jenna Boyington, who currently lives in Florida and attended Reuther though the “Transitions” program, came back for the ceremony to receive her diploma.

“It’s been really hard for me, but the program that I was in, they really helped to get me where I needed to be,” said Boyington, who plans to become an emergency medical technician. “They really care about their students. If you have a question, they will sit down and discuss the topic with you … and make sure you know it.”

CaSandra Gregory, who graduated from Bradford, said she was “really nervous, but excited” about graduating. She was still in the process of choosing a college, but would start in a two-year program before attending a university.

“I want to major in education. I want to be a bilingual teacher,” she said.

Brian Geiger, Kenosha Unified’s regional coordinator of leadership and learning for secondary education, was the master of ceremonies.

The wish for all of them was “to choose to finish strong,” he said.

High schools across Kenosha County are hosting commencement ceremonies for graduates of the Class of 2019.

Azia Allen gets flowers and a hug from her grandmother, Marie Farrakhan.

Graduate Franklin Clark waves at people in the balcony.

Maya Perez walks in with flowers and a stuffed animal.

Samuel Williams and his mother, Tiffiney Tyler, pose for a photo after graduation.

Sarah Schwer is congratulated by faculty members after receiving her diploma.

Kayla Norman proclaims herself an educated queen of 2019 as she poses for photos of her cap.