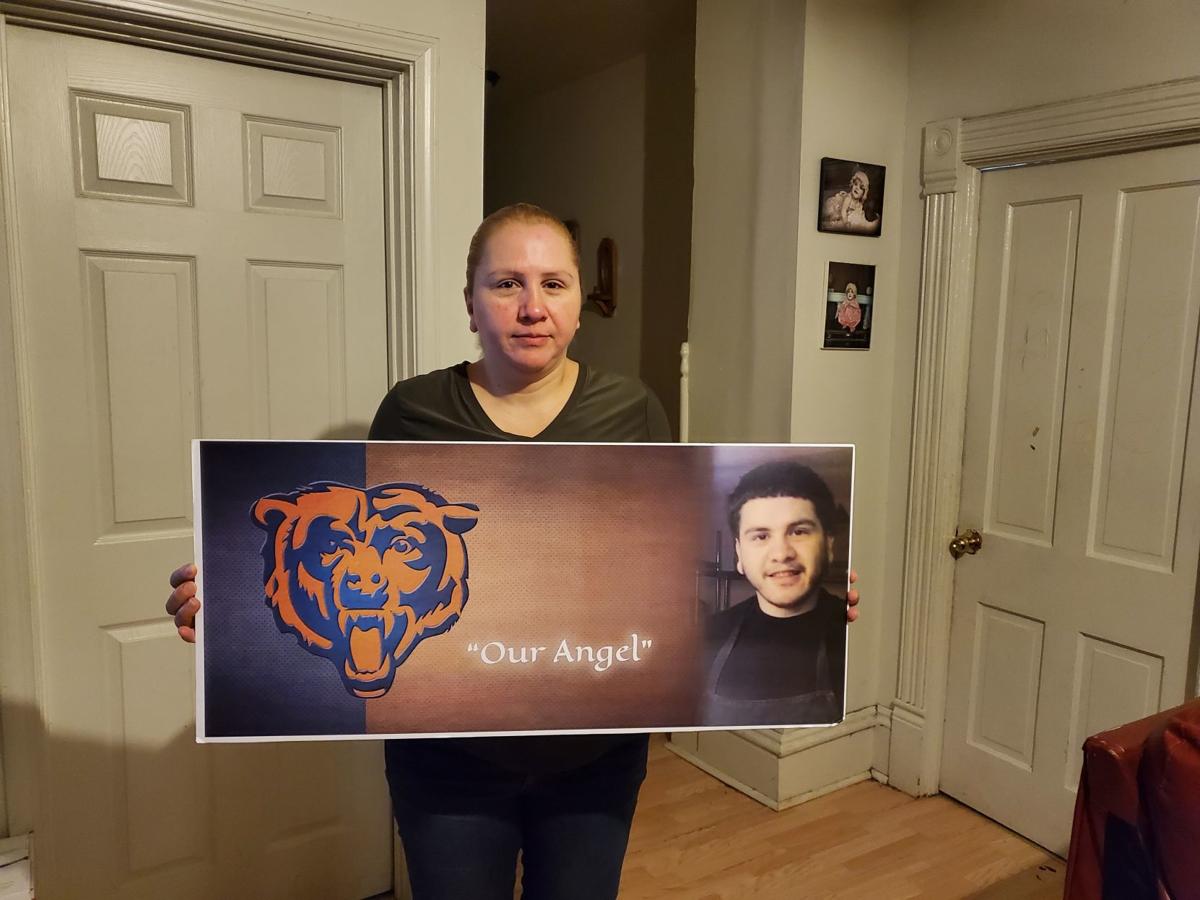 Senorina Alvarez of Kenosha holds up a poster of her son Angel Sanchez, who died Nov. 17 after being in a coma for nearly two weeks. On Nov. 4, Sanchez was struck by a vehicle while riding a bike in the 3400 block of 80th Street. 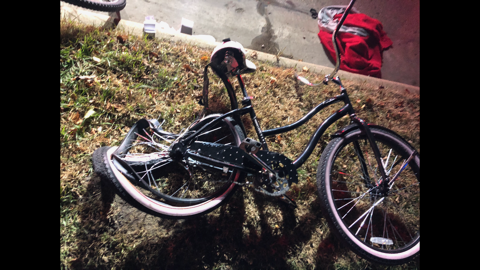 The bike Angel Sanchez was riding at the time of the Nov. 4 accident. Sanchez died less than two weeks later.

A family is seeking answers after a Kenosha man died after being struck by a car while riding his bicycle.

Angel Sanchez, 25, died Nov. 17, less than two weeks after the Nov. 4 crash that left him in a coma, according to his mother Senorina Alvarez.

According to Alvarez and family members, doctors at Froedtert Hospital in Wauwatosa performed two surgeries in an attempt to relieve bleeding and pressure on his brain. He had been in intensive care with critical injuries before his death.

A Kenosha County Medical Examiner’s office-issued death certificate states that the cause of death was due to “multiple blunt force injuries.”

According to a Kenosha Police report, Sanchez was riding west with another cyclist in the 3400 block of 80th Street at about 9:38 p.m. when a car struck his bicycle. The impact caused Sanchez to hit the hood and windshield of the car.

The other bicyclist, Sanchez’s cousin, Alexjandro Jaramillo, was not injured.

The driver, the sole occupant of the vehicle, was not injured and was not cited. At the time of the accident, police said alcohol was not a factor and the driver had been cooperating with authorities.

According to the accident report, Sanchez was wearing “dark clothing” and was “not visible.” The report also states the bike had no lights and was operated without the required equipment, such as reflectors.

Sanchez also was not wearing a helmet, according to the death certificate by the medical examiner.

However, family members said the accident report filed by police was inaccurate.

While Sanchez’s bike had no lights, it did have reflectors, and they said he was wearing a bright red hooded sweatshirt. The items had been at the scene after paramedics worked on him, they said.

Sanchez’s cousin took pictures of the clothing and the bike before investigators told him to stop, according to their aunt Jessica Diaz.

“They’re trying to say he didn’t have reflectors and his clothes were dark. He was wearing a red sweater,” Alvarez said. “It’s bright red. How can somebody not see that?

“You see the blood there? How fast was this guy going?” Alvarez said, pointing to blood on the mangled bike in a photo. They believe the vehicle was going faster than 30 mph speed limit when it struck him.

“So, how fast was this guy going that he did all this damage to my son? Because (Angel) is a big boy,” she said, adding that her son was of stocky build.

The vehicle, according to the accident report, had “disabling damage” and had to be towed from the scene.

Jaramillo, 18, said he the “car came out of nowhere with no lights on. It came so fast.” He said the driver didn’t stop until the next block.

“He didn’t even try to brake. I don’t think he realized he’d hit somebody until moments later,” said Jaramillo.

Jaramillo said after his cousin was struck, he was knocked out and was nonresponsive.

“I called the police right away, and they came within four minutes,” he said.

Jaramillo said personnel at the scene told him that Sanchez “had brain damage and a fractured skull” and that they would need to transport him to a hospital for treatment.

Jaramillo said the driver came to the scene and acknowledged he was involved in the accident.

The driver, who is not being named because he has not been charged, was contacted by the Kenosha News for this story, but could not be reached for comment.

The family said they are frustrated by lack of information from police about the incident and the status of the investigation, if any.

They said what little they’ve learned about the accident has come from media reports.

Alvarez said they visited the police department twice — the first time two days after the accident and again on Nov. 19, two days after Sanchez was taken off life support.

“They told us that since Angel was an adult, they couldn’t give us information and that they were waiting to take a statement from him,” said Diaz of the first visit. “He was on life support and in a coma.”

Alvarez said the officer they spoke to the last time they visited didn’t know Sanchez had died. At that time, they learned from police that if the bloodwork from the driver in the accident “came back clean” he wouldn’t be charged, she said.

“We don’t know what kind of investigation they did. We feel like they skimmed (over) the investigation,” Diaz said.

According to Lt. James Beller, of the Kenosha Police Department, the accident is “still being investigated and is an open/active case at this time.”

Family members described Sanchez as a punctual and positive person. He worked as a butcher at Model Market along with his cousin and uncle Antonio Jaramillo.

“We always used to call him the ‘public defender’ at work because he was always sticking up for the other employees when there would be trouble with the bosses. He would stick up for them,” the elder Jaramillo said.

He rode his bike all over town because he didn’t drive and people recognized him, said his mother.

Family was very important to him, she said.

“He loved his siblings so much,” she said.

On Nov. 27, five days after Sanchez’s funeral, the family held a candlelight vigil at the crash site. Another vigil is planned for 3 p.m. Dec. 13 in the 3400 block of 80th Street on what would have been Sanchez’s 26th birthday.

“We deserve answers. At the very least we want to know that they’re paying attention and investigating, and at the end of the day we want justice,” Diaz said.

“Our goal right now is justice for Angel. That’s what our vigils are called, and we’re going to continue, because he deserves it.”

Here are the crime stories published online and in the print product of the Kenosha News between Dec. 8 and Dec. 12, 2019.

Senorina Alvarez of Kenosha holds up a poster of her son Angel Sanchez, who died Nov. 17 after being in a coma for nearly two weeks. On Nov. 4, Sanchez was struck by a vehicle while riding a bike in the 3400 block of 80th Street.

The bike Angel Sanchez was riding at the time of the Nov. 4 accident. Sanchez died less than two weeks later.