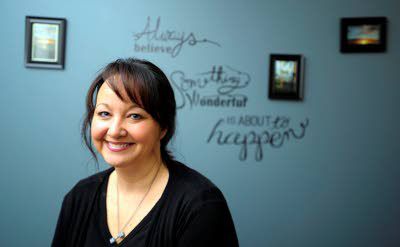 Felicia Labatore has become an activist for suicide prevention, speaking to schools and producing a video about the suicide of her 16-year-old son. 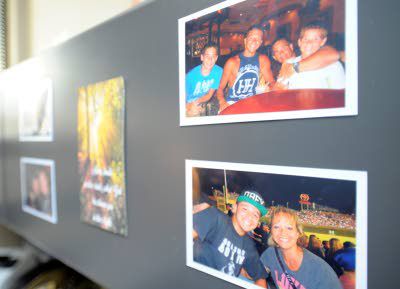 This display shows Clay Davison with friends. His mother Felicia Labatore has become an activist for suicide prevention, speaking to schools and producing a video about the suicide of her 16-year-old son.

Felicia Labatore said her son Clay Davison was the guy his friends would turn to when they needed help.

So when Clay committed suicide in June 2014 at the age of 16, Labatore said she resisted the temptation to sink into despair and decided instead to reach out — to use her family’s experience to help other teens struggling with depression.

“I heard from so many of his friends that ... he was the one that everyone went to when they needed help or guidance. If Clay was such a helpful person, why wouldn’t I want to continue to do that?” said Labatore, a Kenosha Police officer.

Labatore has been regularly speaking to health classes in the Kenosha Unified School District’s three boundary district high schools, and recently released a video of her suicide-prevention presentation online, hoping to reach a wider audience of teens and families.

“I just think it’s the right thing to do,” Labatore said, saying she hopes to reduce the stigma of teen depression so kids feel more comfortable seeking help.

She said she plans to keep up with her mission “as long as kids want to hear it.”

‘Charismatic kid’Clay Davison was an Indian Trail High School student with a charming smile and a talent for athletics. He played football and baseball, and outside of traditional team sports was involved in martial arts and boxing.

“He was a charismatic kid,” his stepfather Joe Labatore said.

Even as a small child, Joe said, Clay would be the center of attention when he walked into a room. As a young teen, he said, other parents would remark to him that Clay could hold one-on-one conversations like an adult.

“Clay was so strong,” Labatore said.

For most people who knew him, his mother said, Clay would seem to be the last person who would be dealing with depression.

But in the background he struggled with the stress of navigating moving back and forth between his mother’s house and his father’s house, and then there were injuries, including a broken hand, that derailed his participation in sports and led to painkiller use.

A changeHe also started spending more time with friends his family thought were inappropriate and a bad influence on his behavior. He began acting out, disappearing from home overnight, or taking his parents’ car without permission.

Another big contributor, his mother and stepfather said, was his decision to start taking steroids in the hope of bulking up and improving his athletic performance.

His parents believe his steroid use contributed to his depression and heard from his friends after his death that Clad had confided he had terrible mood swings when he was taking a round of steroids not long before his death.

According to the U.S. Food and Drug Administration, the abuse of anabolic steroids puts teens at risk for a range of serious side effects, including changes in mental state.

“Mood swings are among the first side effects to show up, and steroid use may lead to mania or depression,” a USDA fact sheet on teen steroid use states.

The Labatores knew Clay was struggling, and they worked to help him address his behavior and his depression. In her video, Labatore said she felt like she was standing on a shoreline watching her son drift away.

Fateful dayOn June 21, 2014, the family went out together, but Clay opted to stay at the house. When they came back home, Labatore said in he video, she went to his room to check on him and found him dead. He had shot himself.

Joe Labatore still seems awed by his wife’s strength in the aftermath. One of her first acts after the death was to reach out to Clay’s friends to offer help.

Within two days of Clay’s death, his mother met with members of his Indian Trail football teammates. She spoke at his funeral as well.

“I went to talk to the team because they were devastated,” she said. “I wanted to let them know to look out for each other. Clay would have wanted me to go to them.”

In the months after the suicide, she sought help from other parents who had lost children.

Telling her storyPart of the result of those conversations was her decision to talk to students about her family’s story and about suicide prevention.

The talks became a personal passion and dovetailed with her role at the Kenosha Police Department, where she is a youth crime prevention coordinator and works on peer support for other officers.

Within six months of Clay’s death, she was giving her talk in classrooms. She tried to speak to every health class at Indian Trail, Bradford and Tremper high schools, talking to about 40 classes each semester.

“The kids really responded to it,” she said, and she learned from school staff that a number of students had reached out for help for depression and other issues after listening to her.

The video she recently released will allow the same message to make it to classrooms she cannot visit in person.

Labatore said her talk focuses on the impact of the choices kids make, from the friends they choose to substance abuse.

She also urges kids to support each other, and to seek the support of trusted adults.

For parents of teens who have depression and are acting out, the Labatores offer this message: No matter how difficult teens can be, make sure outward expressions of love and support go hand-in-hand with discipline.

“It’s important that you keep showing (love) and that it gets expressed,” Joe said.

He said focusing on discipline when teens are misbehaving is natural, but that needs to be leavened with emotional support.

“You are not enabling a kid by making sure they feel loved,” he said.

For helpTeens or adults in crisis can seek help through:

The gunman who killed five people including a prominent doctor in South Carolina was former NFL player Phillip Adams, who killed himself early Thursday, according to a source who was briefed on the investigation.

Felicia Labatore has become an activist for suicide prevention, speaking to schools and producing a video about the suicide of her 16-year-old son.

This display shows Clay Davison with friends. His mother Felicia Labatore has become an activist for suicide prevention, speaking to schools and producing a video about the suicide of her 16-year-old son.