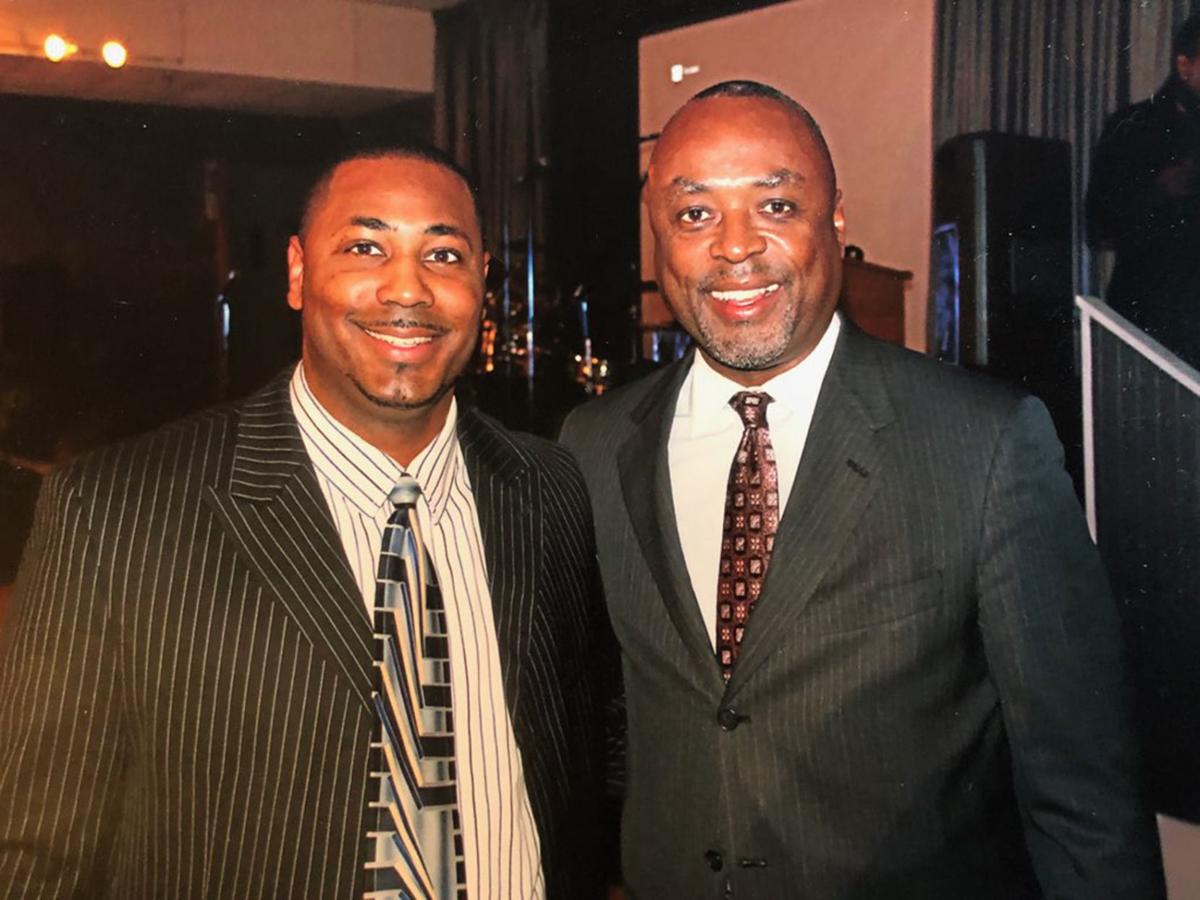 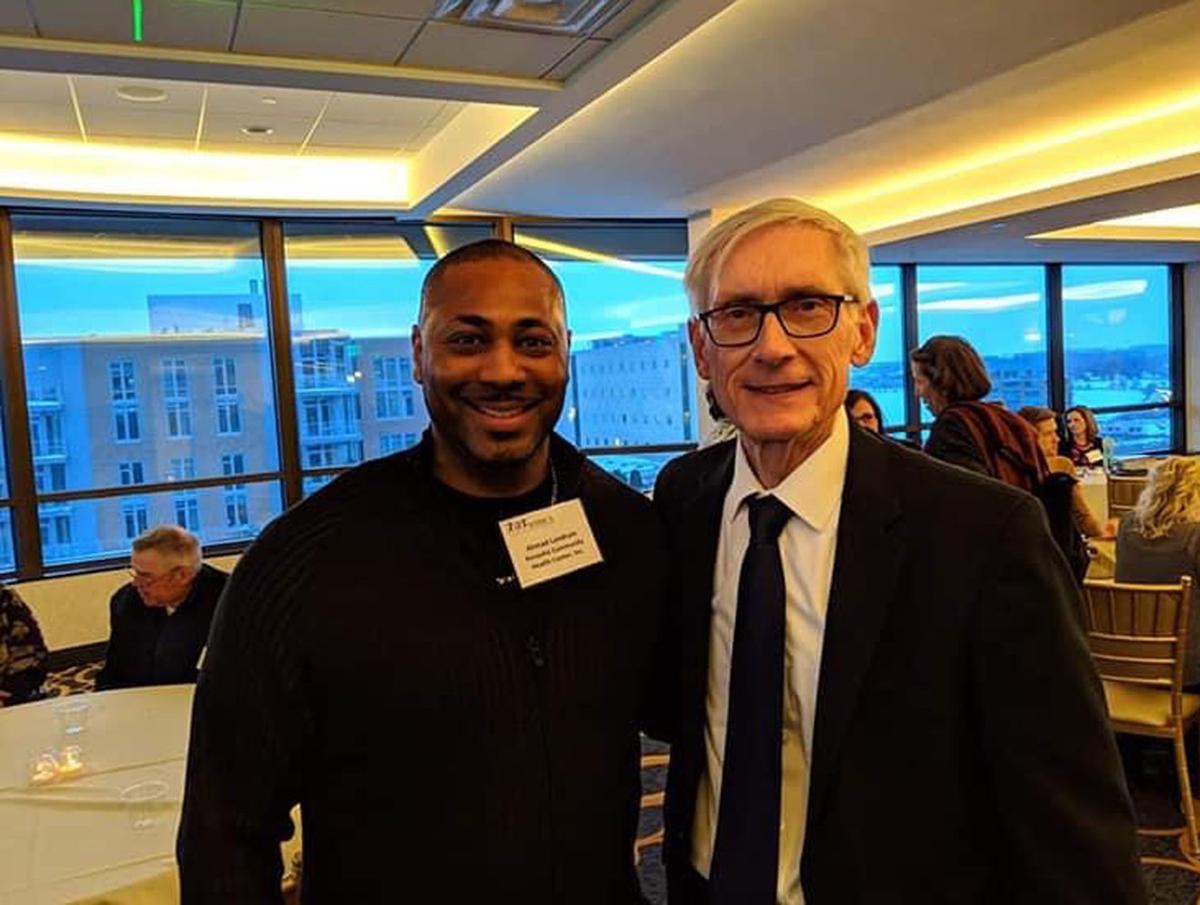 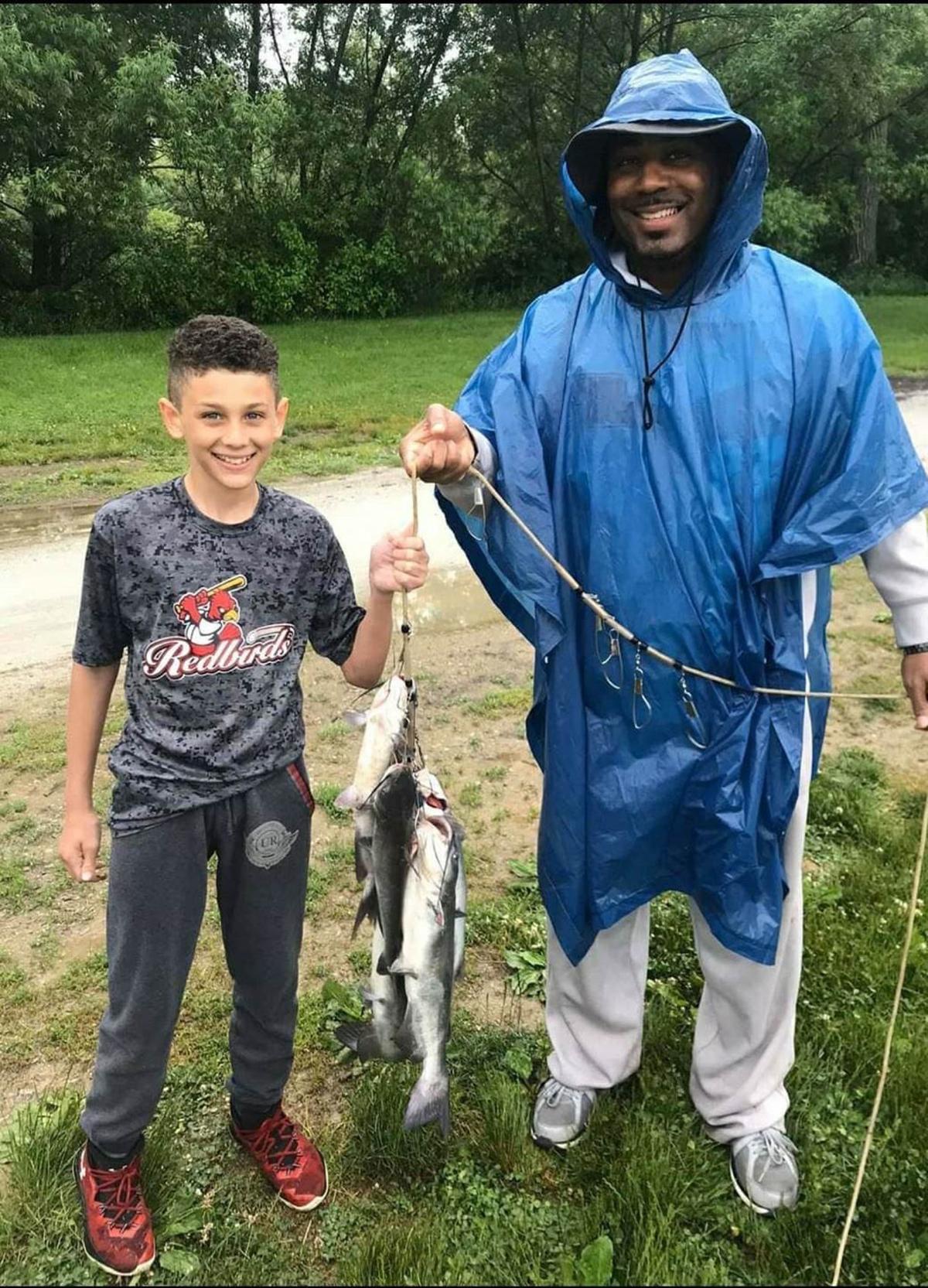 Ahmad Landrum, right, after a successful fishing outing with his son, Caden. 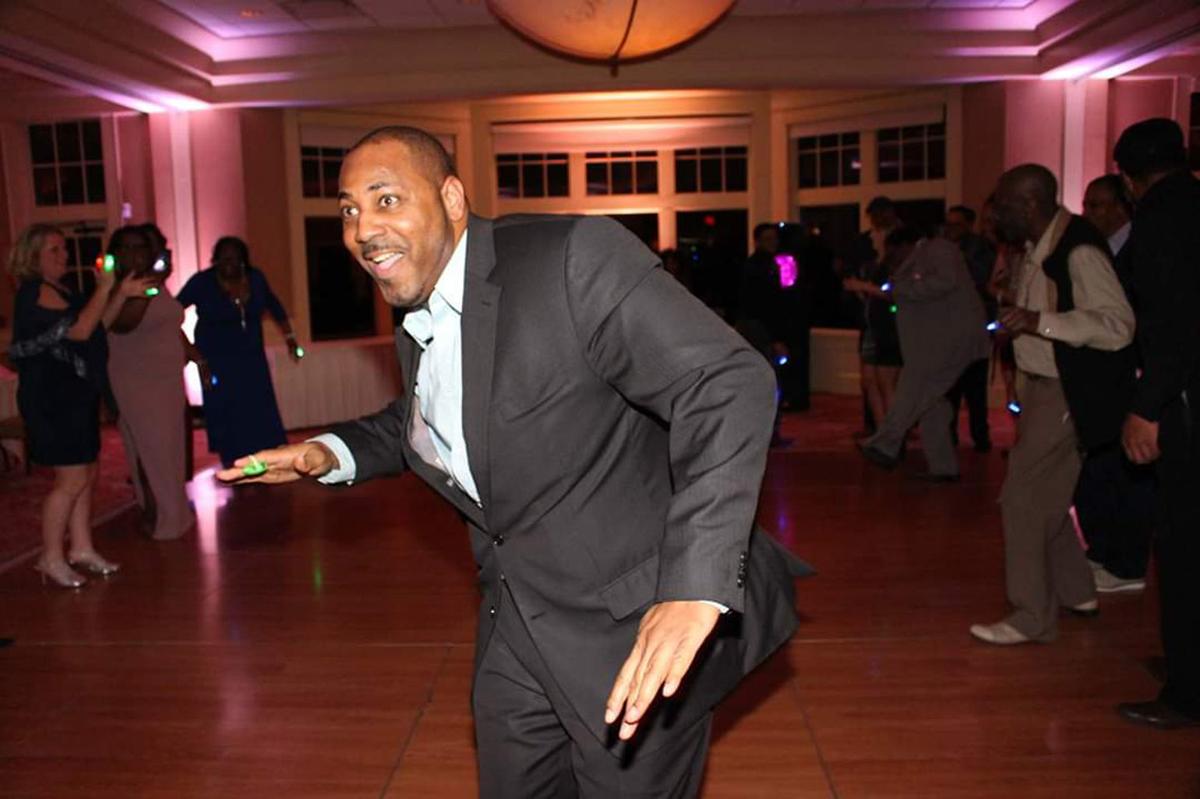 Ahmad Landrum cuts a rug at a party celebrating his aunt's 50th birthday. 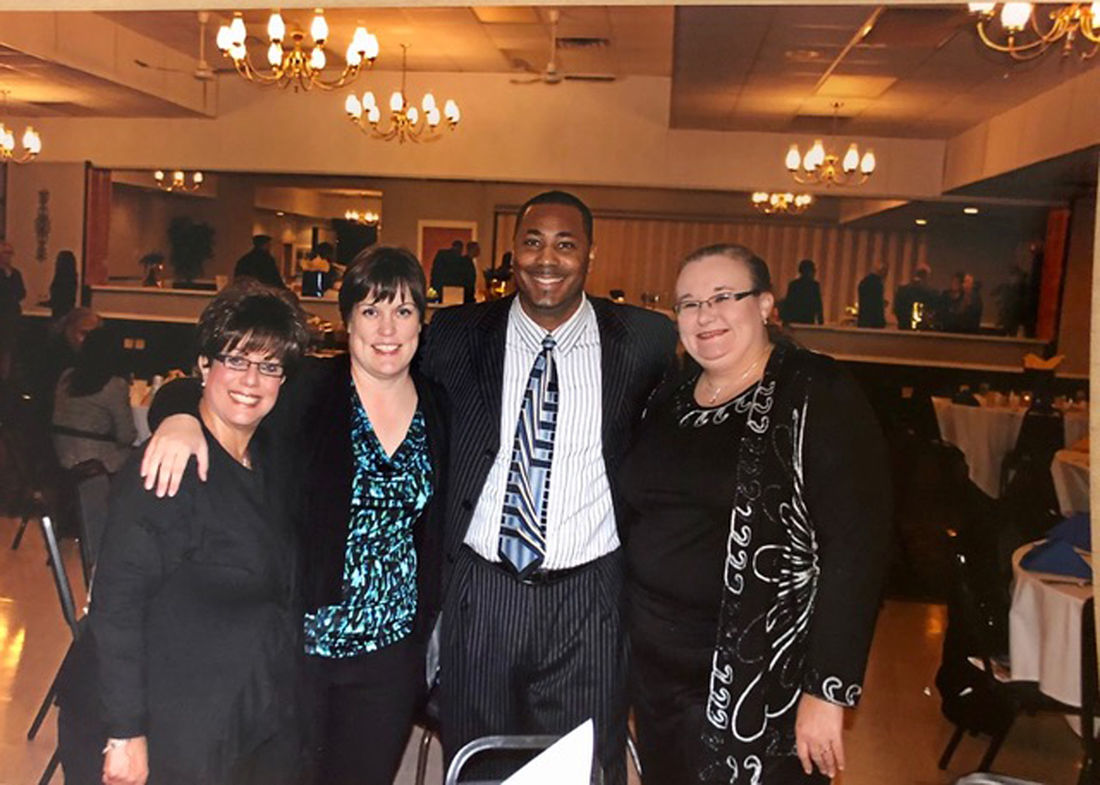 Ahmad Landrum, center, at the NAACP Freedom Fund banquet. With him from left, Patti Prostko, Paula McGuire and Teri Jacobson. 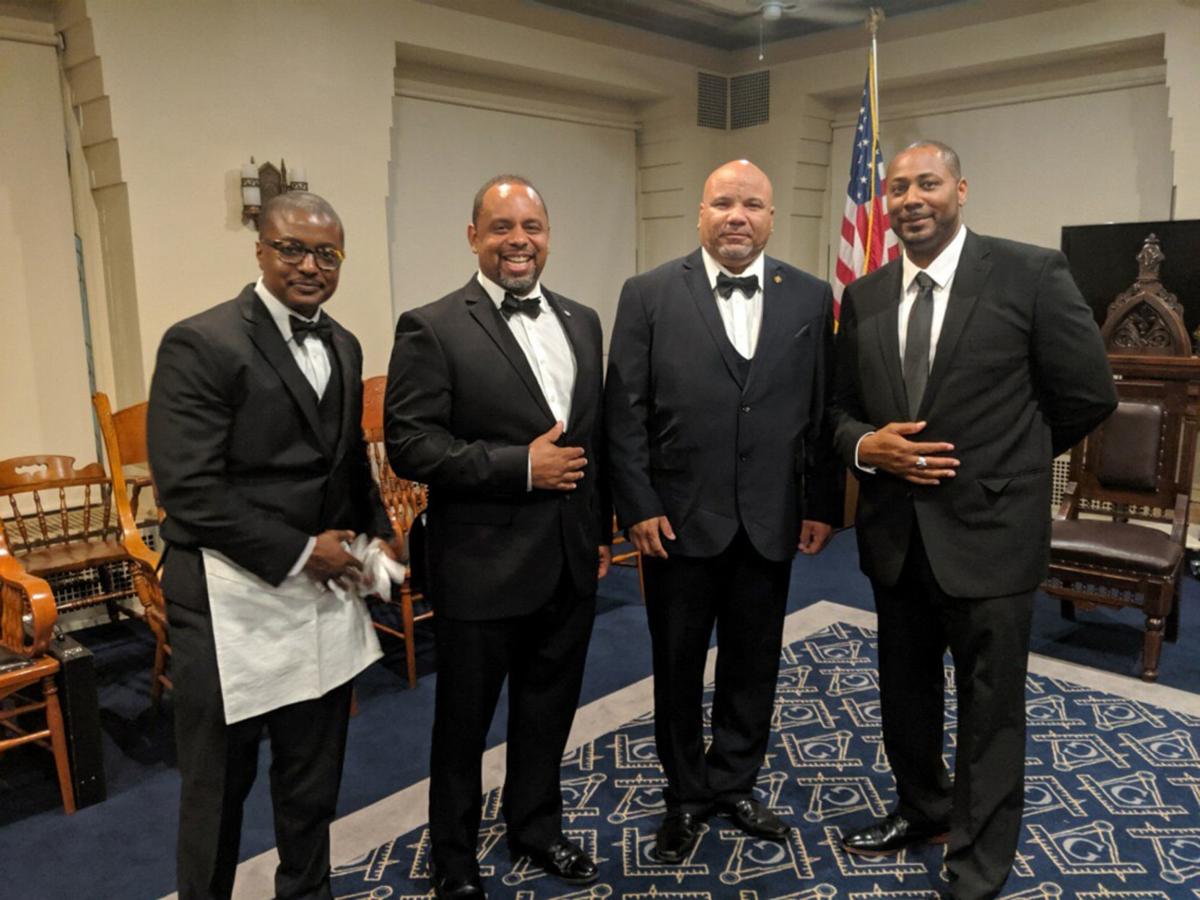 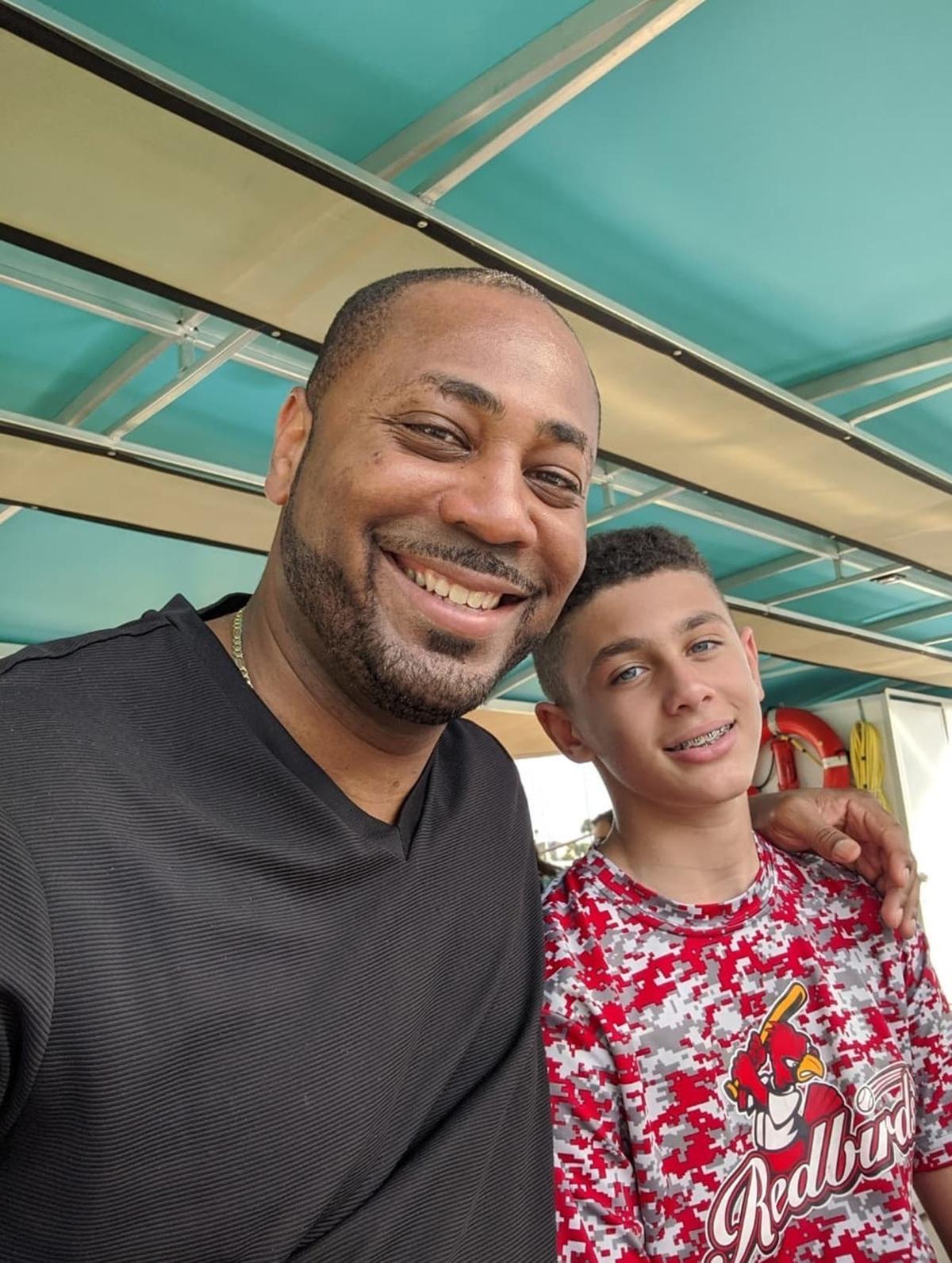 Ahmad Landrum and his son, Caden.

He made a difference in his own life and throughout the Kenosha community.

For two decades, Ahmad Landrum served on the boards of community non-profits, including the Kenosha Area Family and Aging Services, Big Brothers and Sisters of Racine and Kenosha Counties and the Community Action Center.

And for seven years he was communications for the Kenosha County Health Center.

The impact he made on individuals and area agencies has made his death at age 43 even harder, say friends and family.

“He was a great strategic thinker; he was community and solutions-focused,” KAFASI director Katie Oatsville said.

“He was a volunteer who became a board member and then a leader,” longtime friend and relative Tim Mahone said.

“He was a professional man who carried himself professionally,” Landrum’s aunt, Nicole Bardwell, said.

“He loved to learn and loved people and expanding their horizons,” longtime friend Teri Jacobson said.

Guided by mentors The road to Ahmad’s success, however, was not a smooth one, and by his early 20s he found himself doing prison time.

With the guidance of mentors and role models, Ahmad came out on the other side and set his course for guiding others onto the right path.

“He had his fair share of street life,” family member and friend Ardis Mahone-Mosely said.

“Life started out rough, but he worked hard,” Bardwell said. “Ahmad was a statistic who turned his life around.”

Rather than shying away from that part of his life, he used it to help others.

“He was extremely transparent with his own story,” Mahone said. “He believed that in order for him to connect (to people), he had to tell the truth and tell his story.”

Ahmad was born March 9, 1977, in Kenosha. When he was a month old, his mother moved the family to Hawaii, where they lived until he was 13 years old. Returning to Kenosha, Ahmad attended Bullen Middle School and graduated from Bradford High School in 1995.

Things began to go off the rails for Ahmad, and he spent his early 20s in prison. Bardwell believes this was due to a combination of “hanging around the wrong people” and “being stereotyped.”

When he got out of prison in his mid-20s, Ahmad sought a fresh start. He attended Gateway Technical College for an associate’s degree in business marketing. He also connected with family including Tim and Ardis Mahone.

Recalls Tim, “We started talking and he described himself and his goals. ... I understood this young man had a zeal for life and wanted to do more than what prison had given him.”

Tim tested Ahmad’s “zeal” by asking him to be sure he was “serious” about starting over. When Ahmad indicated he was, Tim steered him into volunteer work with the Mahone Foundation’s scholarship program.

Ahmad also plugged into helping with community events, including the HarborPark Blues and Jazz Fest and the Mahone Foundation’s annual gala, Reaching for Rainbows.

“Ahmad never really had that male role model in his life; Tim came along, and Ahmad must have thought, ‘OMG, a black man can be successful!’” Bardwell said.

“Tim was the father Ahmad never had,” agreed Ardis Mahone. “He gave him love, advice and mentorship, and what was so great was that Ahmad accepted it.”

Passing the credit to Ahmad, Tim said, “Ahmad learned the value of good decision-making. He was a warrior.”

Ahmad soon signed onto other community projects, including KAFASI and Big Brothers and Big Sisters of Racine and Kenosha and sitting on the planning committee for Kindness Week.

“He served on the KAFASI board for six years and was scheduled to become president,” Oatsville said. “When he was asked to do something he was fully committed, because it was about the relationships.”

This went both ways, she added. When Ahmad had an idea for a project, he had a way of enlisting help for it.

“He had a way of getting you to have this level of buy-in … and child-like excitement for projects,” Oatsville said.

Schooling and degrees After Gateway, Ahmad attained a Bachelor’s degree in business administration from Carthage College.

“He stuck to (his schooling) even though life threw him more lemons,” Bardwell said.

Bardwell says she consulted Ahmad when she wanted advice on selling home-crafted soaps, and he took marketing to the next level.

To help others with their promotional needs, in 2010 Ahmad founded his own marketing company, Tarfur Industries.

He became involved with the Community Action Center and the Kenosha County Health Center and in 2012 became KCHC community relations director.

One of Ahmad’s KCHC initiatives was Seal a Smile, a program providing tooth sealants to area schoolchildren whose families were without access to dental care.

He also created a community health walk as a way for KCHC to expose kids and families to healthier lifestyles, Tim Mahone said.

“He really, truly believed in health equity and was brilliant at navigating the community and its needs,” Mahone said.

Jacobson, country treasurer who met Ahmad through his community involvements, was impressed with his passion for improving community health.

“Not only did he expect me to do (the health walk), but he’d have a half-hour Zumba session beforehand!” Jacobson said.

Expanding on his interest in community health care, in 2019 Ahmad began working for DentaQuest, a nonprofit organization seeking to improve dental health for under-served populations.

In his personal life, Ahmad cultivated friendships and interesting pastimes. Jacobson said she and Ahmad became fast friends who bonded over birthday celebrations and “good scotch.”

Ahmad became a member of the Masons, Prince Hall Grand Lodge #1 F & AM, Wisconsin. He loved to collect post cards and grill out and was a skilled barber.

“No one could cut my hair like Ahmad,” Ardis Mahone said.

Ahmad was also a dedicated, involved father to his son, Caden, now 13.

Ahmad took Caden camping, taught him to fish and took him to see the ocean.

“He fought hard to be in that boy’s life. He felt he didn’t have a dad in his life and didn’t want his son to feel like he did,” Bardwell said.

Nicole says she believes that having a son was motivating for Ahmad.

“I think that’s when the light bulb went off — he wanted to turn things around for himself and make his son proud,” she said.

Ahmad also gave lots of time to his nephews, taking them to the gym, going to their sporting events and giving them “life advice,” Bardwell said.

“He was giving others the stability he wished he had had growing up,” she said.

“Because he’d come up a difficult way up the ladder, he always tried to be a better leader for others,” Jacobson said. “He’d asked himself, ‘How much more can I do to make this person successful?’”

“He never forgot where he came from, but he was also able to leave it behind,” Tim Mahone said.

“Ahmad wanted to write a book to tell his story,” Ardis Mahone said. “It would have been one of those stories you could have incorporated into school lessons and learning circles.”

Ahmad Landrum, right, after a successful fishing outing with his son, Caden.

Ahmad Landrum cuts a rug at a party celebrating his aunt's 50th birthday.

Ahmad Landrum, center, at the NAACP Freedom Fund banquet. With him from left, Patti Prostko, Paula McGuire and Teri Jacobson.

Ahmad Landrum and his son, Caden.