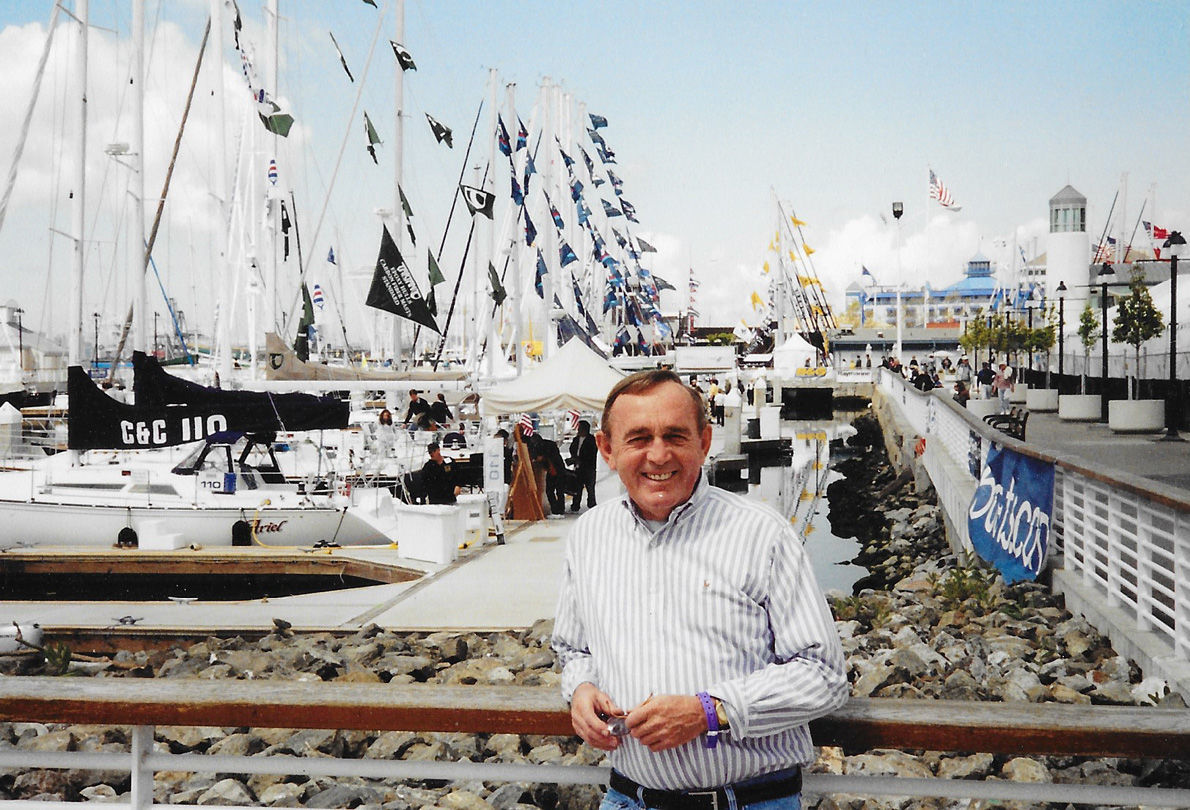 Above: Summers found Bob Enstad at Southport Marina where he moored his sailboats. Right, top: During the 1960s Bob Enstad, far right, served as personal attache to General Francis Kane, second from right, as a member of the National Guard. Right, bottom: Bob Enstad aboard one of his many sailboats. 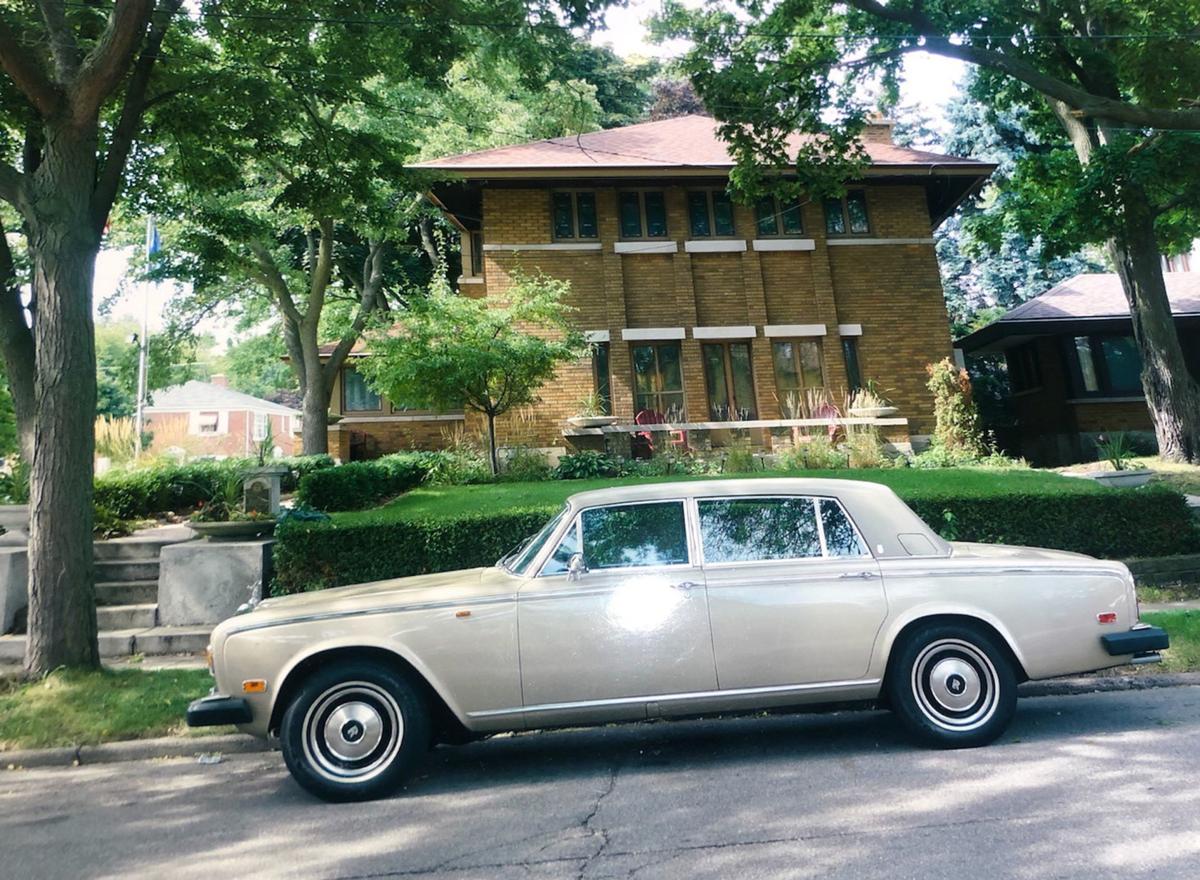 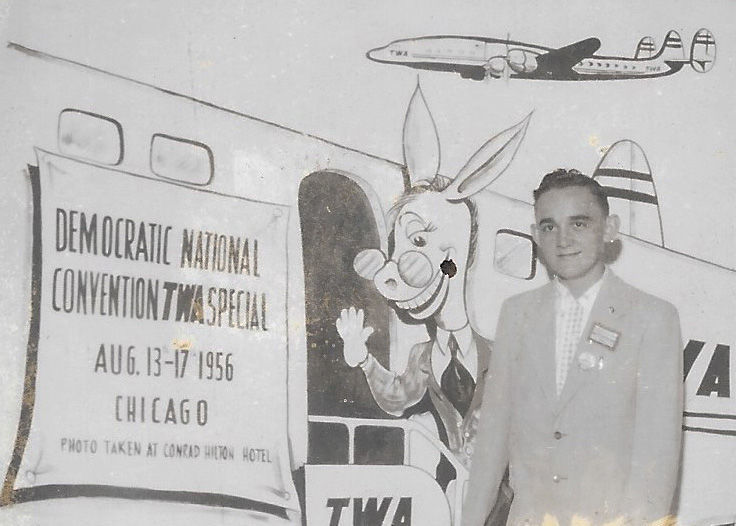 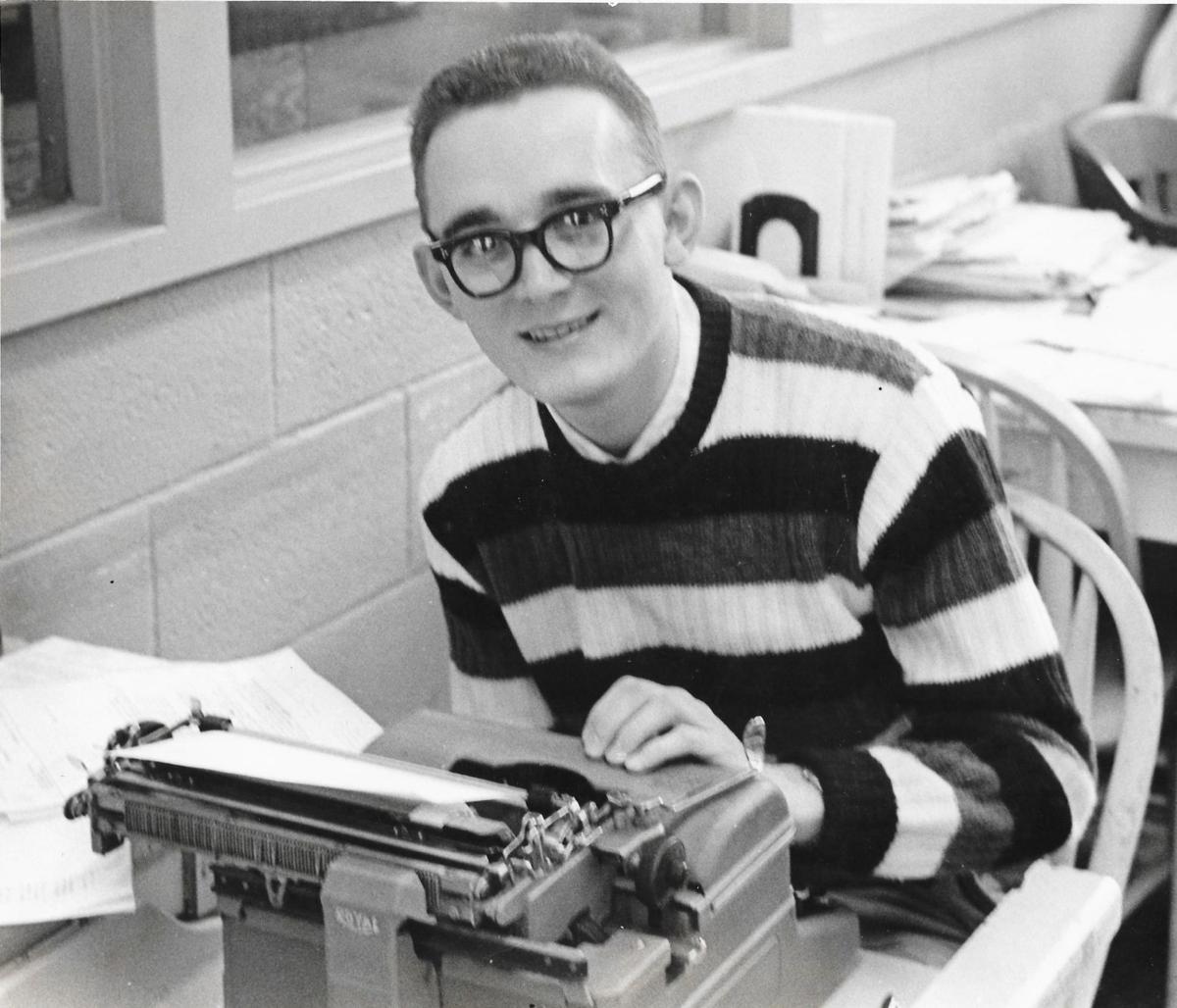 Left: Bob Enstad in his early days as a reporter. Right: Bob Enstad decided to pursue journalism after attending the 1956 Democratic National Convention in Chicago. 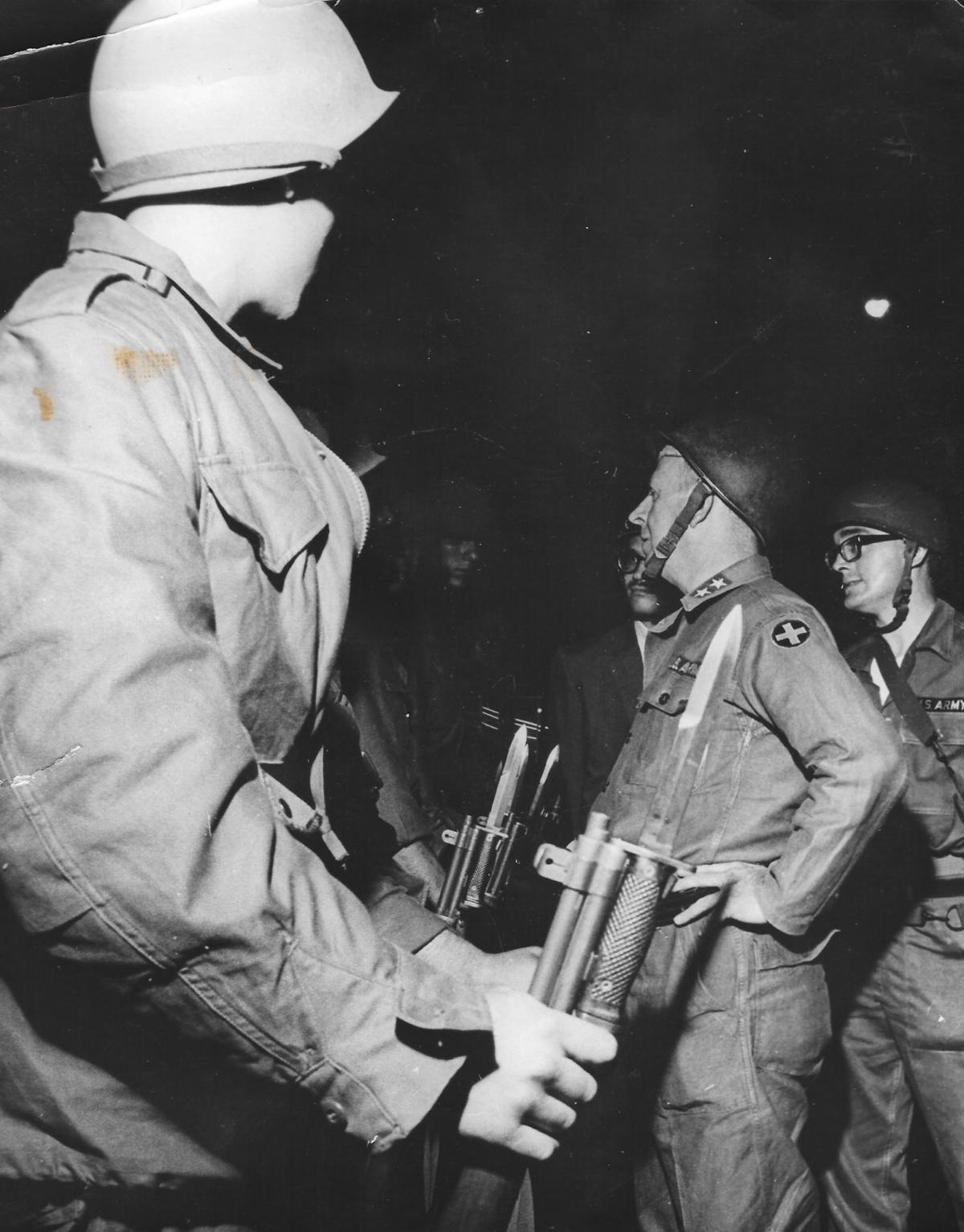 During the 1960s Bob Enstad, far right, served as personal attache to General Francis Kane, second from right, as a member of the National Guard. 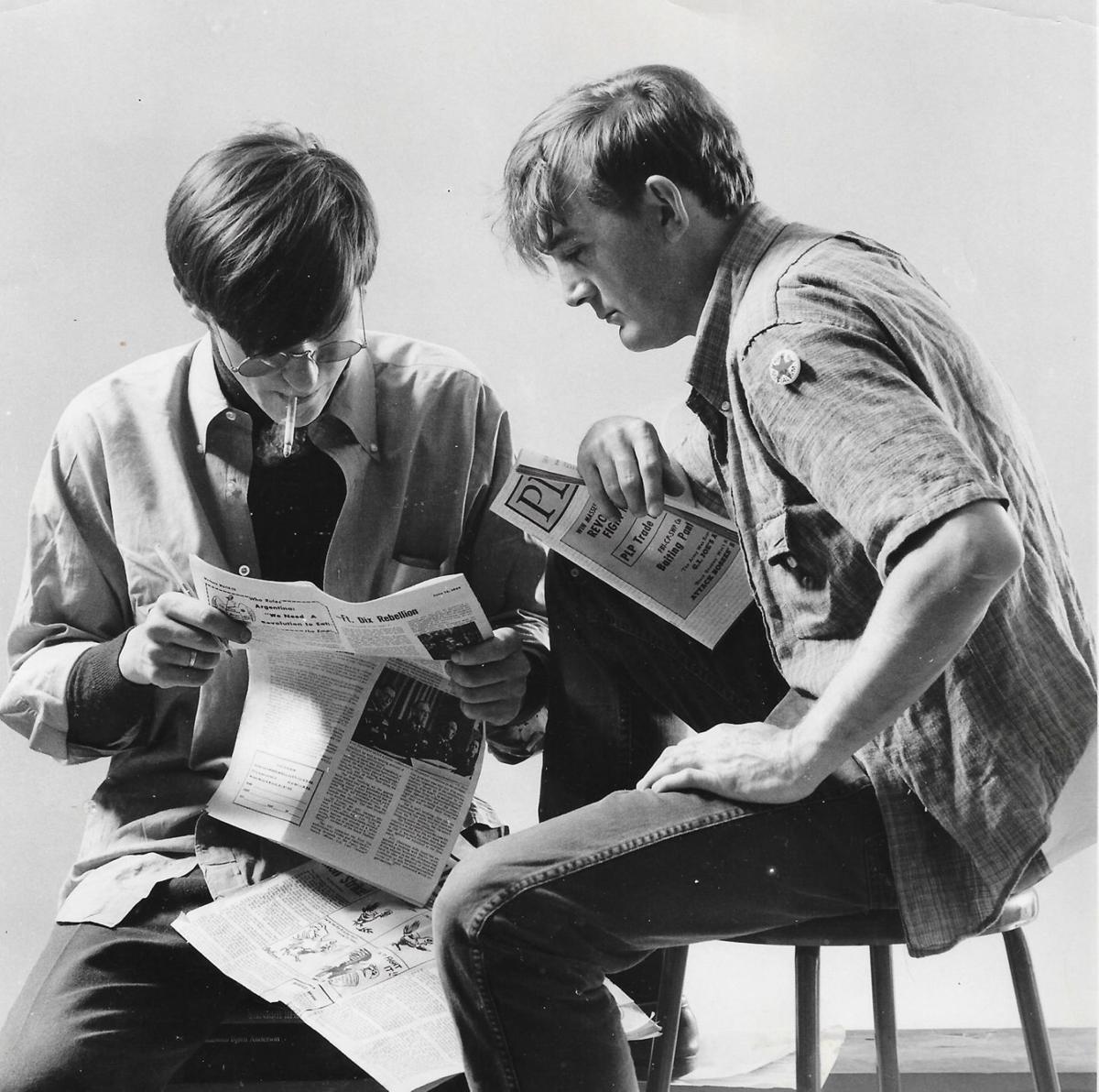 Bob Enstad, right, and a colleague at the Chicago Tribune scan the headlines in 1969. 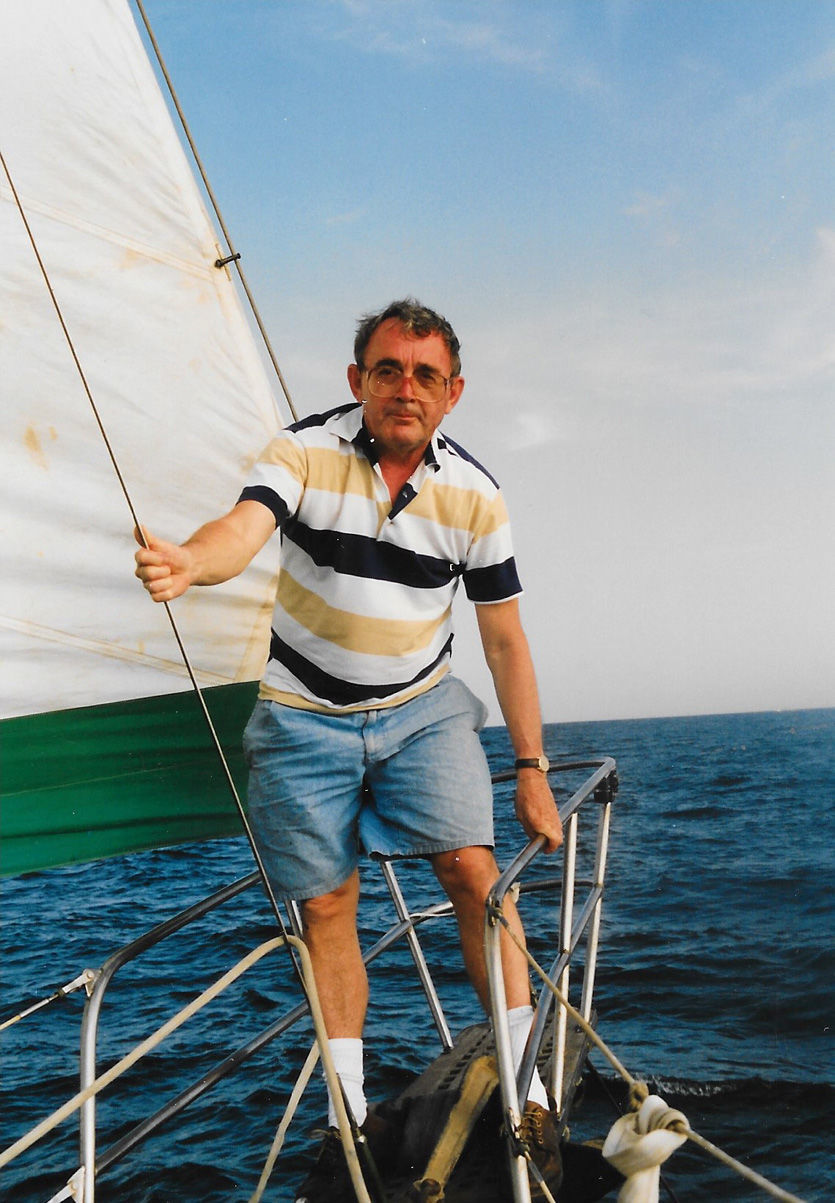 Bob Enstad aboard one of his many sailboats.

Bob Enstad was the consummate newsman; a man who sought out quality, professionally and personally.

He had a mind for detail, the gift of gab and a way with words.

Star of the city desk

Plying his trade as a reporter for the Chicago Tribune for 36 years, Bob worked cops stories, federal court trials and investigative pieces.

Some of his biggest bylines were on stories of the Chicago Seven trials following riots at the 1968 Democratic National Convention.

“Bob was one of the stars of Tribune’s city desk, but he didn’t act like a big shot,” John said. He was always very approachable. He was also a very likable guy, soft-spoken with a subtle sense of humor — good traits for helping cultivate news sources,” John said.

Bob was a Pulitzer Prize nominee and co-winner of a Peter Lisagor Award from the Chicago Headline Club.

Bob parlayed his press prowess when serving with the Illinois National Guard in the 1960s.

In a letter of commendation, General Francis Kane wrote: “I feel that Robert Enstad, with his newspaper experience, made a major contribution to the excellent reputation which has accrued to the Illinois National Guard.

“During...crises, particularly in 1965 and 1966, he met the working press from all over the world as they came to the Armory looking for stories. He understood their problems and consequently he was able to assist them greatly.”

The common denominator was quality, said longtime friend Fil Gonzales. “He wanted the latest and greatest.”

In 1978, while still living in Chicago, Bob purchased a Frank Lloyd Wright-style home near Kenosha’s downtown. This, too, was done on the grand scale, noted his sister, Karyl Rommelfanger.

“He was not one to buy any old house; it had to be something unique,” she said.

Despite his love of impressive purchases, Bob was not pretentious.

“He’d load up his luxury vehicles with yard waste. He loved pulling up to the dump in his Rolls Royce while wearing a flannel shirt and jeans,” Fil said.

He seemed destined for the role of roving reporter early on, said family.

“He was very gregarious, even as a young kid,” Karyl said. “Our folks had a business in town, and Mom said Bob would walk up and down the street and just talk to people. He knew lots of people; he was a talker.”

In high school, Bob wrote a political column for the River Falls Journal. Connections there yielded press credentials to attend the Democratic National Convention in Chicago in 1956.

“He watched the reporters interviewing people and decided right then and there he wanted to be a reporter,” Karyl said.

Bob attended the University of Wisconsin-River Falls and attained his journalism degree from Indiana University.

After graduation 1961, Bob received his draft notice and signed on with the Illinois National Guard. He was assigned as General Francis Kane’s personal attache and was on the front lines when the guard was called in to manage “civil disturbances” and the 1967 Chicago blizzard.

In 1961, Bob also began his career at the Chicago Tribune. He started off as a neighborhood news reporter, covering McHenry County, soon moving onto the city desk in Chicago.

In 1970, Bob covered the Chicago Seven trial and, in 1973, covered contempt of court charges against the defendants.

“He knew the law and knew how to talk to lawyers,” John Gorman said. “Bob was wired in — he knew everybody — the state’s attorney and county board members.”

Bob’s coverage of the Chicago Seven trial was “fair, factual and, when it needed to be, colorful,” noted retired Tribune reporter William Mullen in a Chicago Tribune tribute to Bob.

Bob also worked as a rewrite man and briefly reported from the Tribune’s Washington, D.C., bureau in 1971.

In 1991, Bob went to work at the Tribune’s new Lake County Bureau in Vernon Hills, Ill., under John, who was appointed bureau editor.

“He was a mentor to me when we started the bureau,” John said. “He was well-respected and a key guy when we needed information in a hurry.”

Retiring from the Tribune in 1998, Bob moved to Kenosha permanently. Here he indulged his love of sailing and classy cars.

Fil met Bob while driving by Bob’s house in his Porsche 912. Bob had a Porsche 911 and invited Fil to stop to chat. “Bob’s Porsche had a clutch, and he didn’t drive clutch so he let me try it out,” Fil said.

Bob’s fleet of luxury vehicles included two Porsches, a Maserati, a Jaguar and two Rolls Royces, one of which was gold colored.

In the 14 years that Fil knew Bob, Fil says Bob owned “at least four very large boats.” They were usually named for his cats, sporting monikers like Tiger and Cheetah.

“He was a bachelor and had the funds to enjoy those things,” Karyl said.

Bob also gave of his time and his possessions — donating to charity, taking friends on sailboat outings and opening his home for parties.

When a friend’s son graduated from high school, Bob arranged for him to ride to the ceremony in his gold Rolls Royce.

“Bob was super-generous — whether helping young reporters learn the ropes or taking friends out for a sail on Lake Michigan,” said Ross Werland, longtime friend and former Chicago Tribune reporter.

Ross and Fil both recall Bob’s “legendary” Fourth of July parties on his boat in the harbor.

“It seemed like everybody who had a boat at the harbor knew Bob — like he was an unofficial mayor,” Ross said.

“He had great parties at his house, especially for former Chicago Tribune colleagues,” Ross said. “I don’t know anybody who could inspire that many people to drive up from Chicago, but he’d get a huge crowd in his amazing back yard.”

Above: Summers found Bob Enstad at Southport Marina where he moored his sailboats. Right, top: During the 1960s Bob Enstad, far right, served as personal attache to General Francis Kane, second from right, as a member of the National Guard. Right, bottom: Bob Enstad aboard one of his many sailboats.

Left: Bob Enstad in his early days as a reporter. Right: Bob Enstad decided to pursue journalism after attending the 1956 Democratic National Convention in Chicago.

During the 1960s Bob Enstad, far right, served as personal attache to General Francis Kane, second from right, as a member of the National Guard.

Bob Enstad, right, and a colleague at the Chicago Tribune scan the headlines in 1969.

Bob Enstad aboard one of his many sailboats.