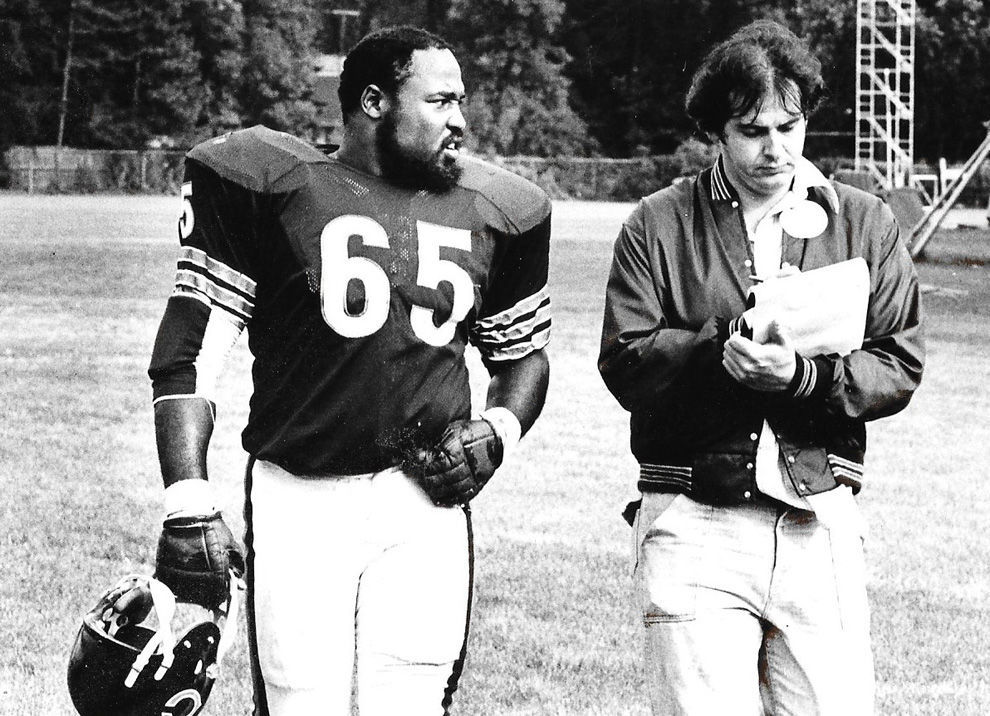 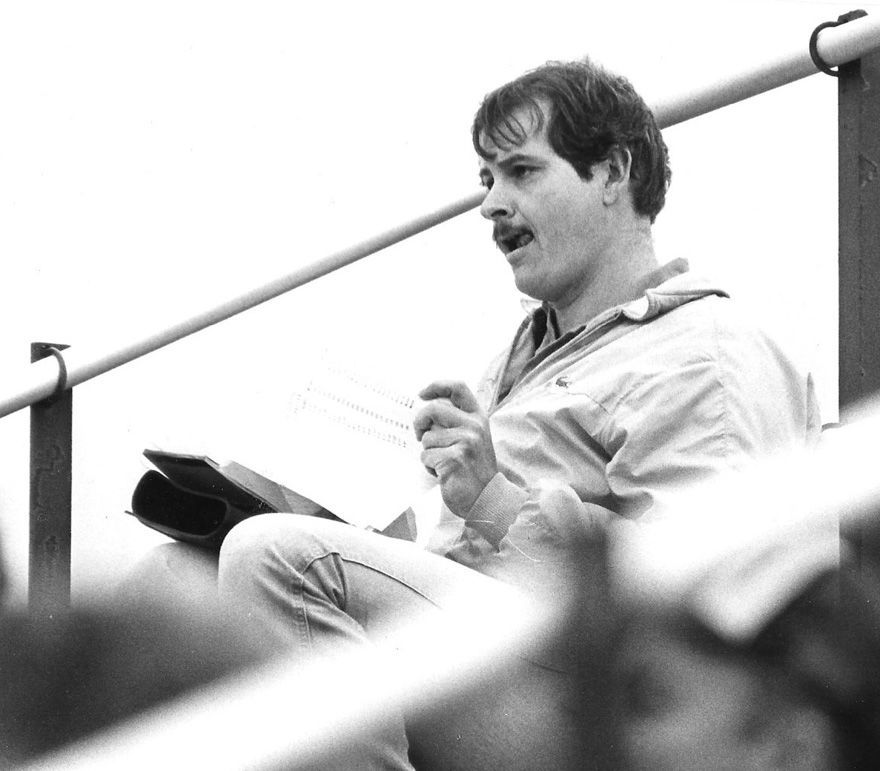 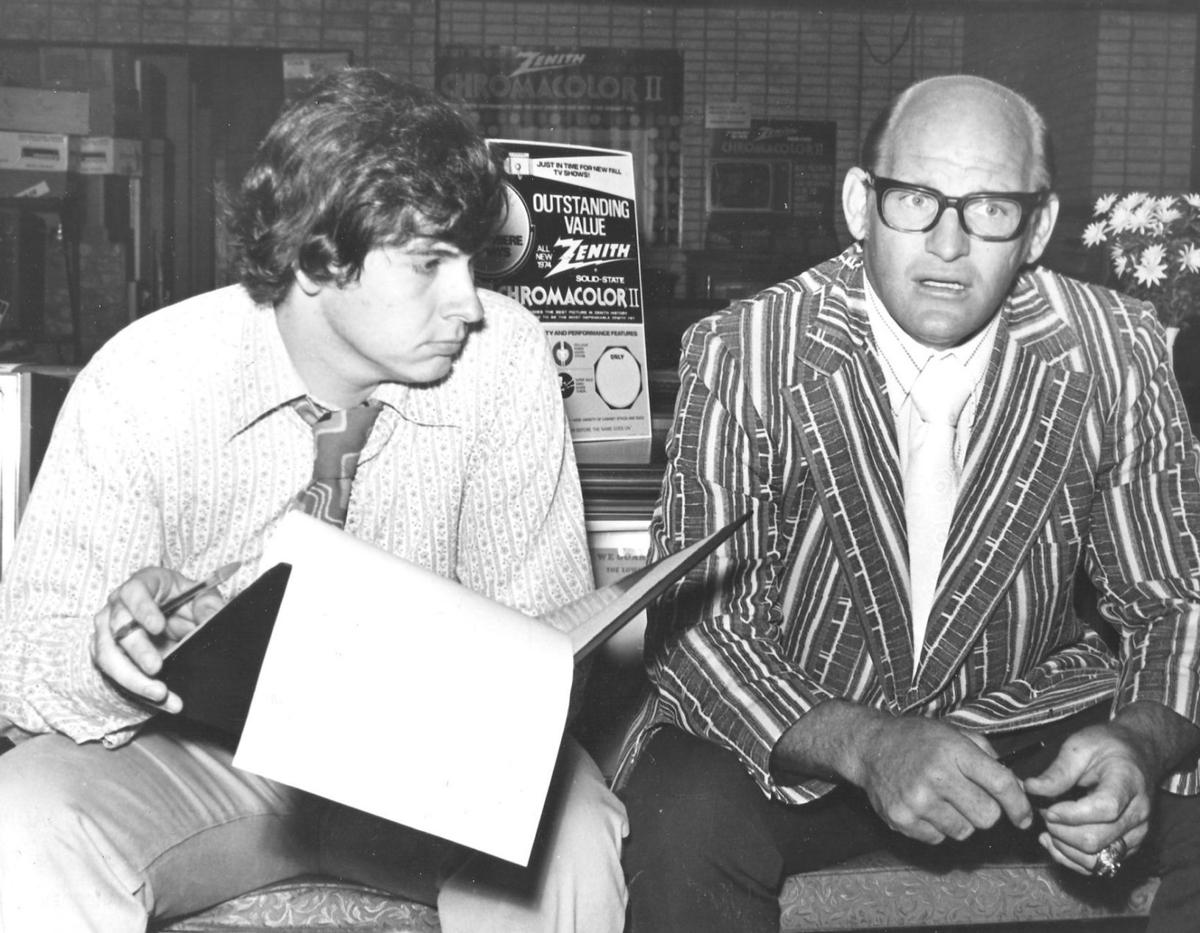 Dan Manoyan as a reporter for the Waukegan News-Sun in 1978. 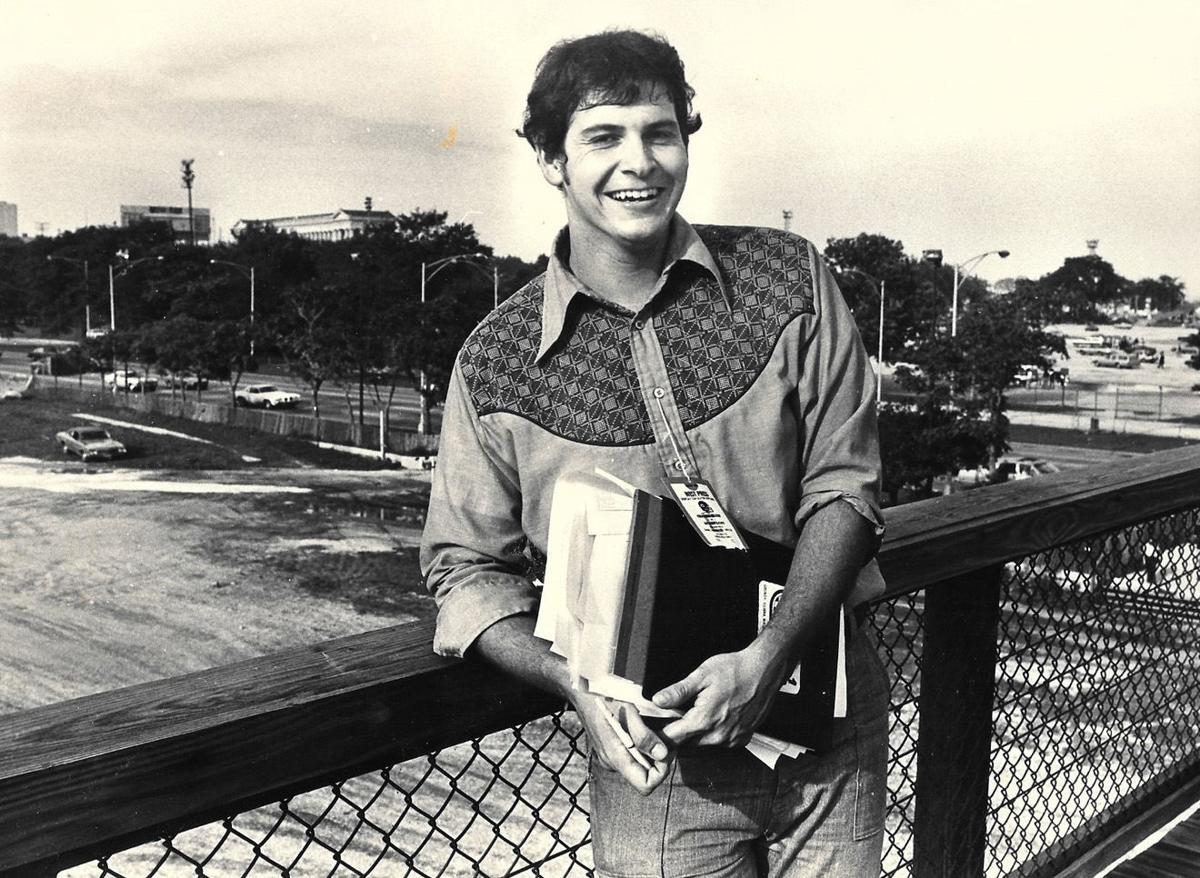 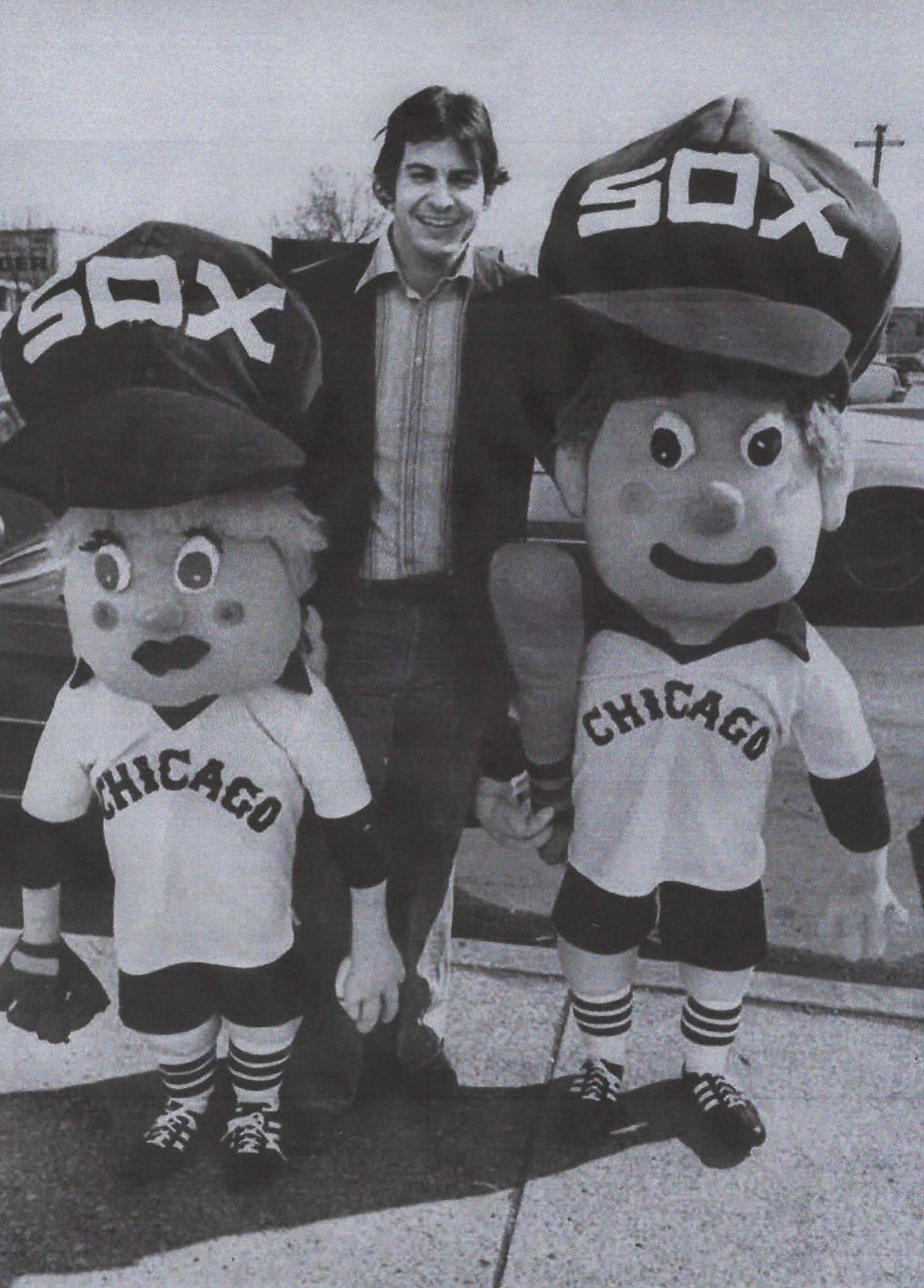 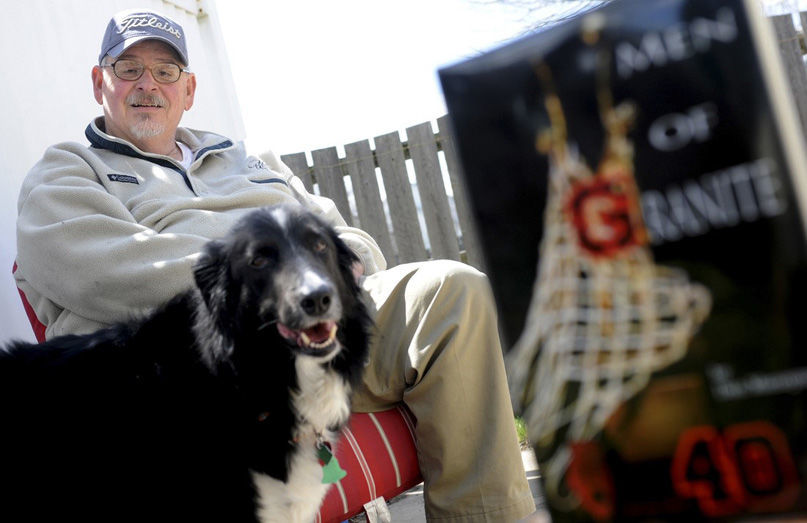 Dan Manoyan with canine companion Bailey pose for a promotional picture for his 2007 book “Men of Granite.”

Daniel Manoyan was many things: a skilled writer of sports, a devoted family man, the son of an immigrant proud of his Armenian roots and “a character.”

For nearly four decades, Dan was a career sportswriter at the Kenosha News, the Waukegan News-Sun, the Dallas Morning News and the Milwaukee Journal Sentinel.

Whether it was covering pro-football games, golf tournaments or college sports, he loved a good deadline, said his son, Randall Manoyan.

“Sometimes he was covering night games until 11 p.m., but he was cool as a cucumber when meeting deadlines,” Randall said. “He loved the thrill of it.”

“The story behind was his favorite part—his passion were the stories behind the events that occurred,” Randall said.

“Dan was an intriguing character who could spin a story,” said longtime friend and Kenosha mayor John Antaramian.

On April 20, at age 69, Daniel Manoyan died at his home in Kenosha.

The youngest of three children, Dan was born in Waukegan, Ill., on Sept. 20, 1950, to Edward and Elaine Manoian.

Edward Manoian had been born in France to Armenian parents, and when he immigrated to America, he changed the last name to Manoyan, explained Randall.

Dan attended and graduated from Waukegan schools and then attained a bachelor’s degree in journalism from the University of Illinois, Urbana-Champaign.

His first job in journalism was as a sportswriter for the Kenosha News. From 1972-1977, Dan covered sports events throughout the area.

He then went to work for the Waukegan News-Sun, as a columnist and sportswriter. He took several awards for his coverage of the Bears’ 1985 Superbowl championship, noted Randall.

In 1984, Dan married Christine Maruschin, and they settled in Waukegan.

In 1988, Dan was offered a job with the Dallas Morning News and moved his family to Dallas.

More than once, Dan made career choices based on his desire to be closer to his children as they grew up. When he and Christine divorced in 1992 and she returned to Waukegan with their sons, Dan quit the Dallas paper for a job at Milwaukee Journal Sentinel.

From 1992 until 2009, Dan “worked his way up the ranks” covering the Green Bay Packers, Superbowl championship games and University of Wisconsin-Madison football and basketball.

Dan honed a professionalism admired by his colleagues.

“I thought the world of him as a reporter,” said Gary D’Mato, longtime friend and former Milwaukee Journal Sentinel colleague.

“He was an excellent writer, reporter and desk editor —very well rounded— and also easy to work with,” he said.

Golf was one sport Dan really liked to cover, Randall said. “He loved covering PGA tournaments because he loved to golf himself,” Randall said.

“(The Journal Sentinel) would send him around the country where he got to not only watch the best players, but to play the course before tournaments began,” Randall said.

To cover Badger games, Dan lived part-time in Madison, but when it began to take a toll on spending time with his children in Waukegan, he dropped that beat, Randall said.

While still working at the Journal Sentinel, Daniel began researching and writing “Men of Granite.” The book recounted the story of a high school basketball team from Granite City in downstate Illinois that took the state championship in 1940.

Dan was drawn to the story because several of the team were first- and second-generation immigrants from Eastern European countries, said Randall.

“It reminded him of his father’s immigrant experience because some of the kids were Armenian,” Randall said.

“He was very passionate about this sort of a hero because he was very proud of his Armenian heritage,” agreed Gary.

Although there was interest in making the book into a movie, the plan did not materialize at the time. Randall noted he hopes to move the idea forward in the future.

After retirement, Daniel wrote and published his second work, “Alan Ameche: the Story of ‘The Horse.’”

Dan had met Ameche in the 1970s when the Heisman Trophy winner was visiting his hometown of Kenosha, holding the idea until he had retired from reporting.

“Dan enjoyed living in Kenosha so much and wanted to write about the greatest athlete that Kenosha ever produced,” Randall said.

For both books, Dan drew on his many years of journalism experience.

“The research part was about his favorite part about it,” Randall said.

Dan also enjoyed promoting his books at personal appearances, said his son. “In addition to being a good writer, he was also good in front of the mic; when he had a passion for something, he could talk about it for days.”

The protagonists of Dan’s books were not unlike himself.

“Dan was an interesting and wonderful individual; a bigger-than-life character,” said Antaramian.

“He was a big man with a big personality; a fun guy to be around,” Gary said.

Dan Manoyan as a reporter for the Waukegan News-Sun in 1978.

Dan Manoyan with canine companion Bailey pose for a promotional picture for his 2007 book “Men of Granite.”