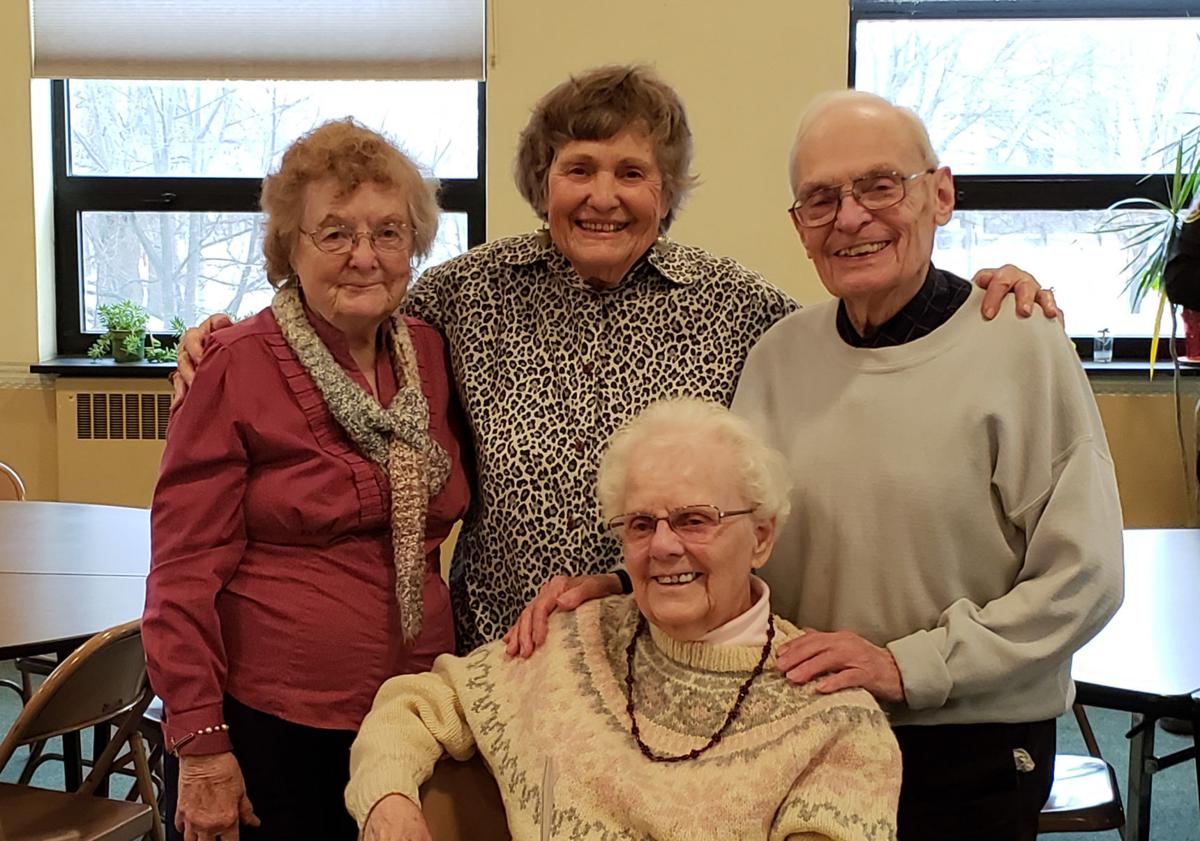 Franklin Gail, far right, celebrates the 90th birthday of his sister, Shirley Gail (seated), at St. Matthew’s Guild Hall. With him from left are his sister Joyce Istvanek and step-sister Patricia Christiansen. 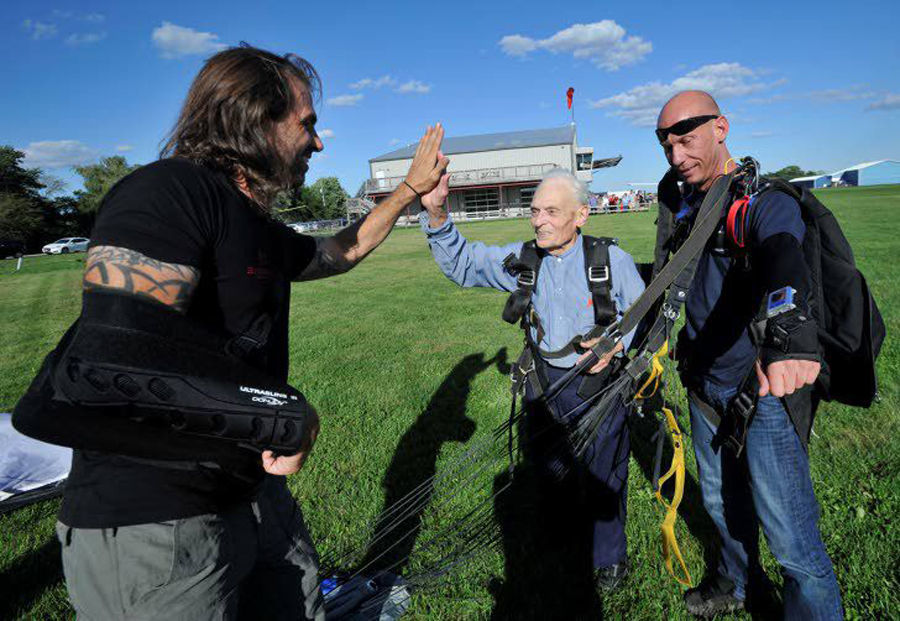 Franklin Gail, center, gets a high-five from Keith George, owner of Skydive Midwest, left, as skydiving instructor Joe Johnson looks on at Skydive Midwest in this photo from 2016. Gail celebrated his 90th birthday with a tandem jump. 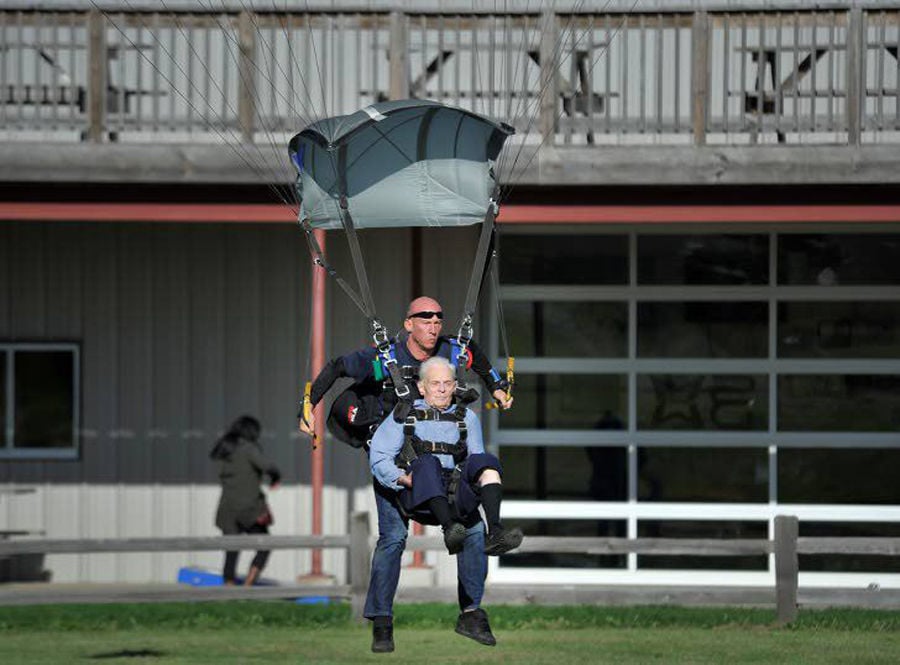 Franklin Gail comes in for his landing after skydiving with instructor Joe Johnson at Skydive Midwest in this photo from 2016. Gail went skydiving to celebrate his 90th birthday. 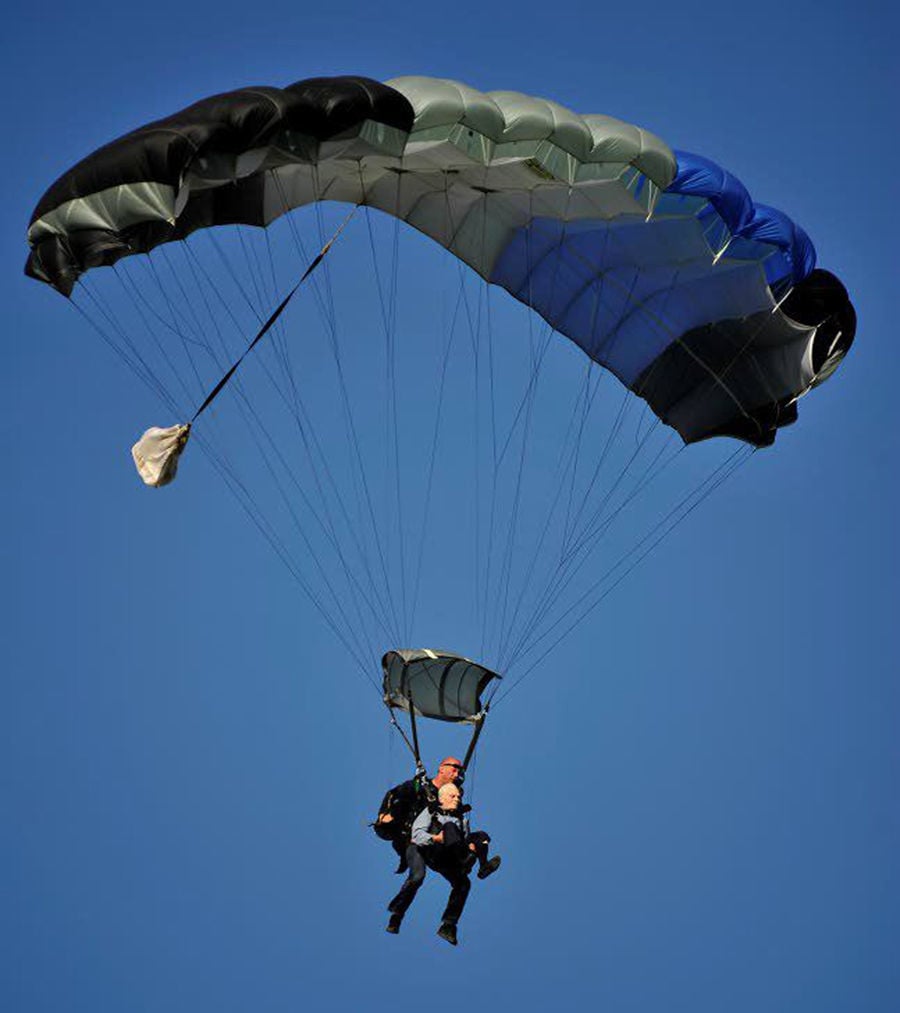 Franklin Gail skydives with his instructor Joe Johnson at Skydive Midwest for his 90th birthday in 2016.

In his remarks, the Rev. Matthew Buterbaugh said it was unusual to see a church so full for a man in his 90s.

He quickly added that this not surprising, however, because Franklin was “so very present and vibrant in all areas of his life and throughout his life.”

A lifelong Kenoshan, Franklin was a man who participated fully in the life of St. Matthew’s, was at the helm of the Hope Council on Alcohol and Other Drug Abuse and volunteered for the Shalom Center soup kitchen. He also was the force behind bringing the Miss Wisconsin pageant to Kenosha in 1959.

In the 1960s, Franklin marched for housing and racial equality and in protest of the Vietnam War.

“He was 5’2” and 140 pounds; we sometimes referred to him as ‘the tiny giant,’” said his nephew, Glenn Christiansen.

Franklin was also intellectually curious and articulate, said those who knew him. “He took three newspapers and could write unbelievably well,” Glenn said. “He always wanted to know about the world and what was going on.”

“He enjoyed theological questions and thoughtful discussions and had a prodigious memory,” Buterbaugh said.

Other qualities attributed to Franklin were helpfulness and kindness.

“He brought a little kindness — people all felt like they were connected to him even if they only met him once,” Glenn said.

“He was very quiet, but if he thought something was the right cause, he was right there,” said his step-sister, Pat Christiansen.

Here are the Fave Five stories of reporter Heather Poyner, including features that capture personal triumph, the giving nature of groups and individuals, a unique treatment for Parkinson’s Disease and a behind-the-scenes look at students in a local culinary class.

Pechous bikes across America for Journey of Hope

Woman will donate a kidney to childhood playmate

Franklin was born in March 5, 1926, in Hinsdale, Ill., to Arthur and Mary Gail. When he was four, his family moved to Kenosha.

After graduating from Bradford High School, he enlisted in the Army Air Corps. He served as a company clerk for the transport command from 1945 to 1947.

“He wanted to be in a fighting unit, but was told he was too good at administration,” Glenn said. “(His superiors said) it would have taken five guys to replace him.”

Franklin was deployed to many countries including China, Japan, Africa and South America. “Through these travels, he saw a lot of things that really affected his life later on; different cultures and abject poverty,” Glenn said.

On the lighter side, he was assigned as military liaison for entertainers who paid visits to bases where he was stationed.

Franklin enjoyed this detail and often took the opportunity to collect autographs, which he sent home to his parents, said Glenn.

Returning from the service, Franklin attended the University of Wisconsin-Madison, studied business and went to work with his father at French and Gail insurance company in Kenosha.

He was briefly married to Eleanor Sokol; the marriage ended in divorce.

In 1959, Franklin became president of the Kenosha Jaycees, and was general chairman and director of the Miss Wisconsin pageant held in Kenosha in 1959 and 1960. He also served as the official escort for Miss Wisconsin to Atlantic City, N.J., during those years.

On the 60th anniversary of the pageant, Franklin commented, “We thought we did a great job. We felt we gave Kenosha good publicity and a great entertainment.”

A faithful member of St. Matthew’s, over the years Franklin served in nearly every role except that of ordained minister, said Buterbaugh.

Noted parishioner Nancy Barasch said, “Franklin welcomed newcomers, cleaned the kitchen when those using it left it in disarray .... and helped the disabled use the handicapped lift into Guild Hall. He also occasionally fixed broken or tricky locks or machinery.”

“He had this passion to do things for other people, and St. Matthew’s was another vehicle for him to do this,” Glenn said.

After he retired from insurance, Franklin worked officially and unofficially in the office of St. Matthew’s.

“When the church secretary was on vacation or left, Franklin served as the secretary and trained new secretaries,” Nancy said.

For about eight years beginning in the 1980s, Franklin was director of the Hope Council — then called the Kenosha County Council on Alcoholism — following its founder, Robert White.

In 2011, the council bestowed upon Franklin its “Offering Hope” award.

“He realized alcoholism was not a choice, and he wanted to help people,” Glenn said.

“He did everything very well and very faithfully,” Buterbaugh said.

For his 90th birthday, Franklin gave himself a present: he went skydiving.

He was quoted as saying: “Once in a while you gotta do something crazy no matter how old you are.”

“He was this amazing little person who did big things,” Glenn said. “He had imagination to dream big.”

But, emphasized Glenn, he did so modestly.

“He had a corner of life to stake out as his own to conquer,” Glenn said. “He didn’t really care if anyone patted him on the back and said, ‘Job well done.’”

Franklin Gail, far right, celebrates the 90th birthday of his sister, Shirley Gail (seated), at St. Matthew’s Guild Hall. With him from left are his sister Joyce Istvanek and step-sister Patricia Christiansen.

Franklin Gail, center, gets a high-five from Keith George, owner of Skydive Midwest, left, as skydiving instructor Joe Johnson looks on at Skydive Midwest in this photo from 2016. Gail celebrated his 90th birthday with a tandem jump.

Franklin Gail comes in for his landing after skydiving with instructor Joe Johnson at Skydive Midwest in this photo from 2016. Gail went skydiving to celebrate his 90th birthday.

Franklin Gail skydives with his instructor Joe Johnson at Skydive Midwest for his 90th birthday in 2016.