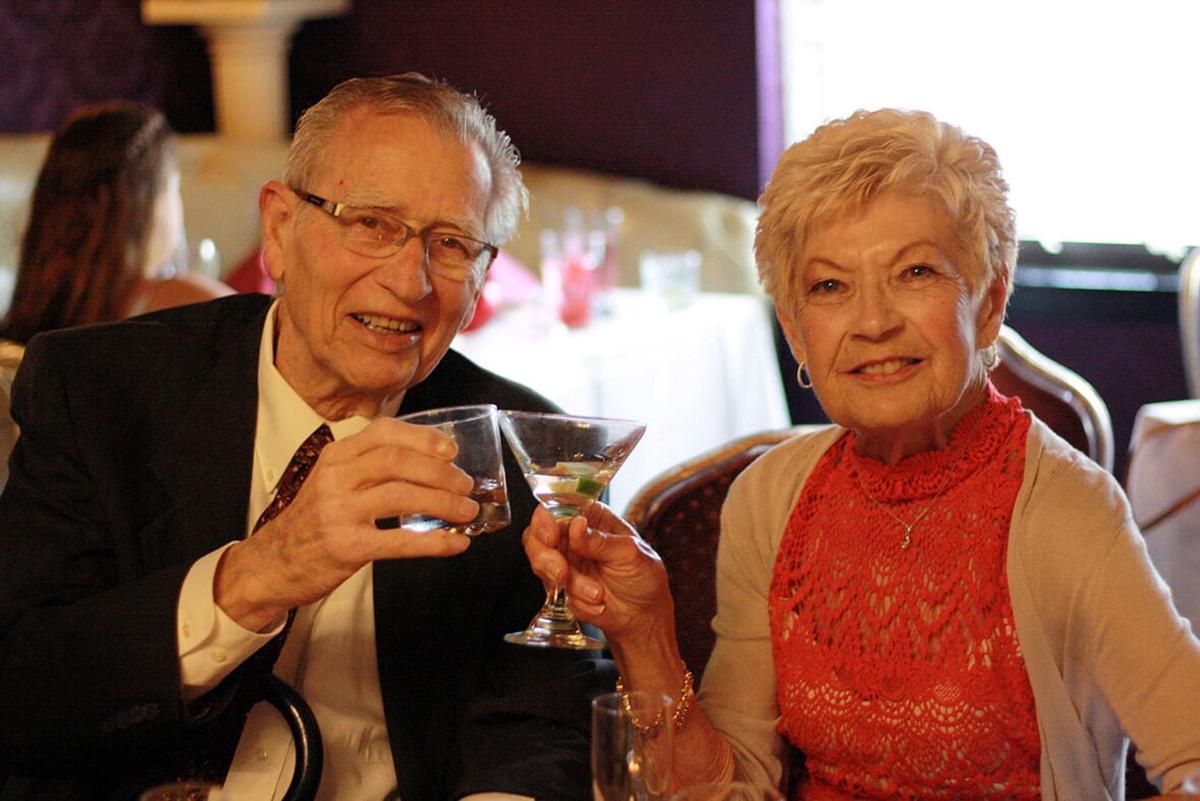 Lori and Frank Aiello make a toast on their wedding anniversary in 2015. 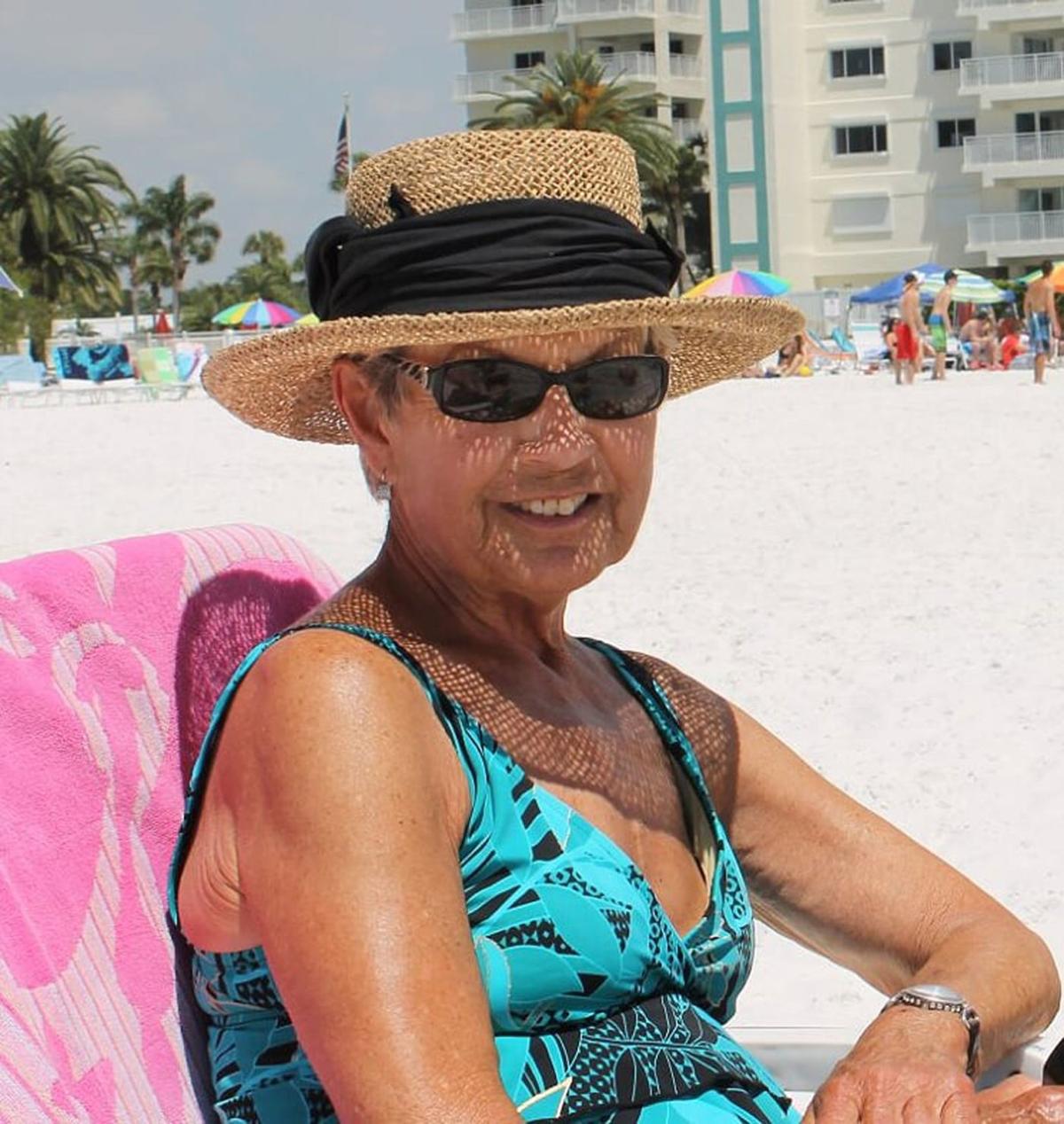 Lori Aiello enjoying the sun on the beach in Sarasota, Fla. 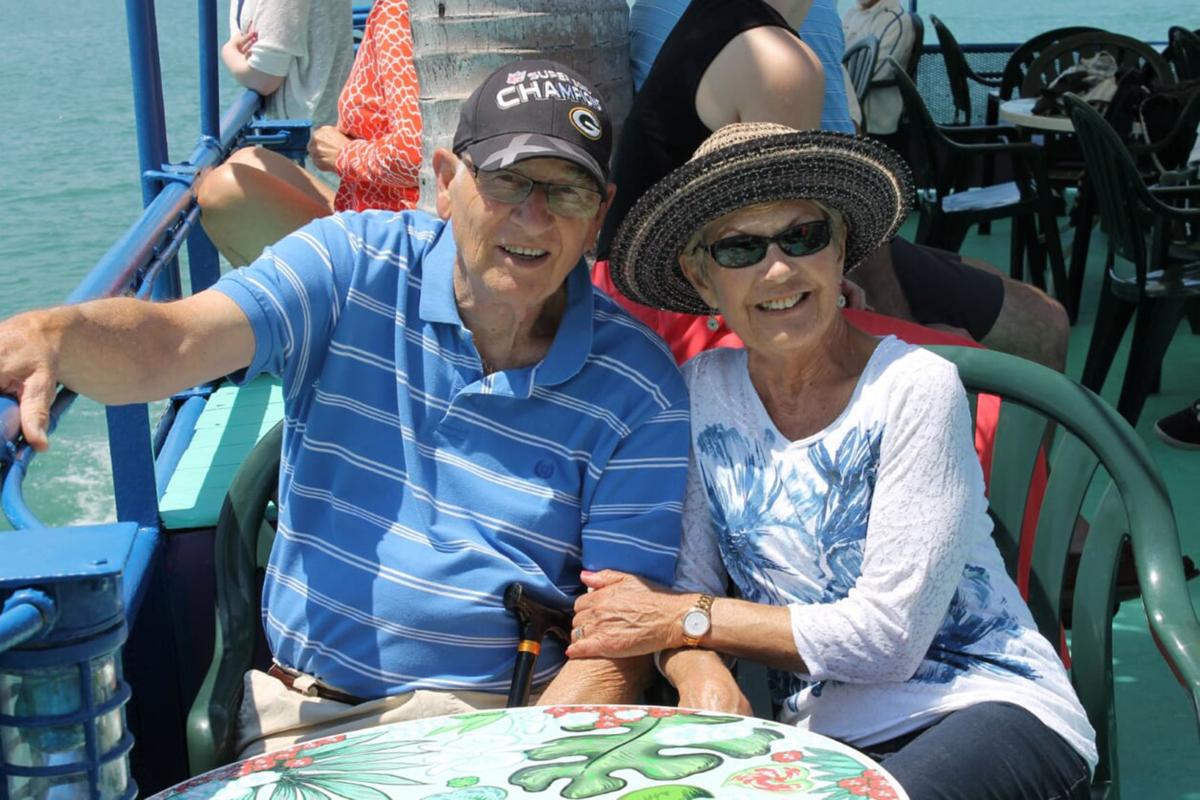 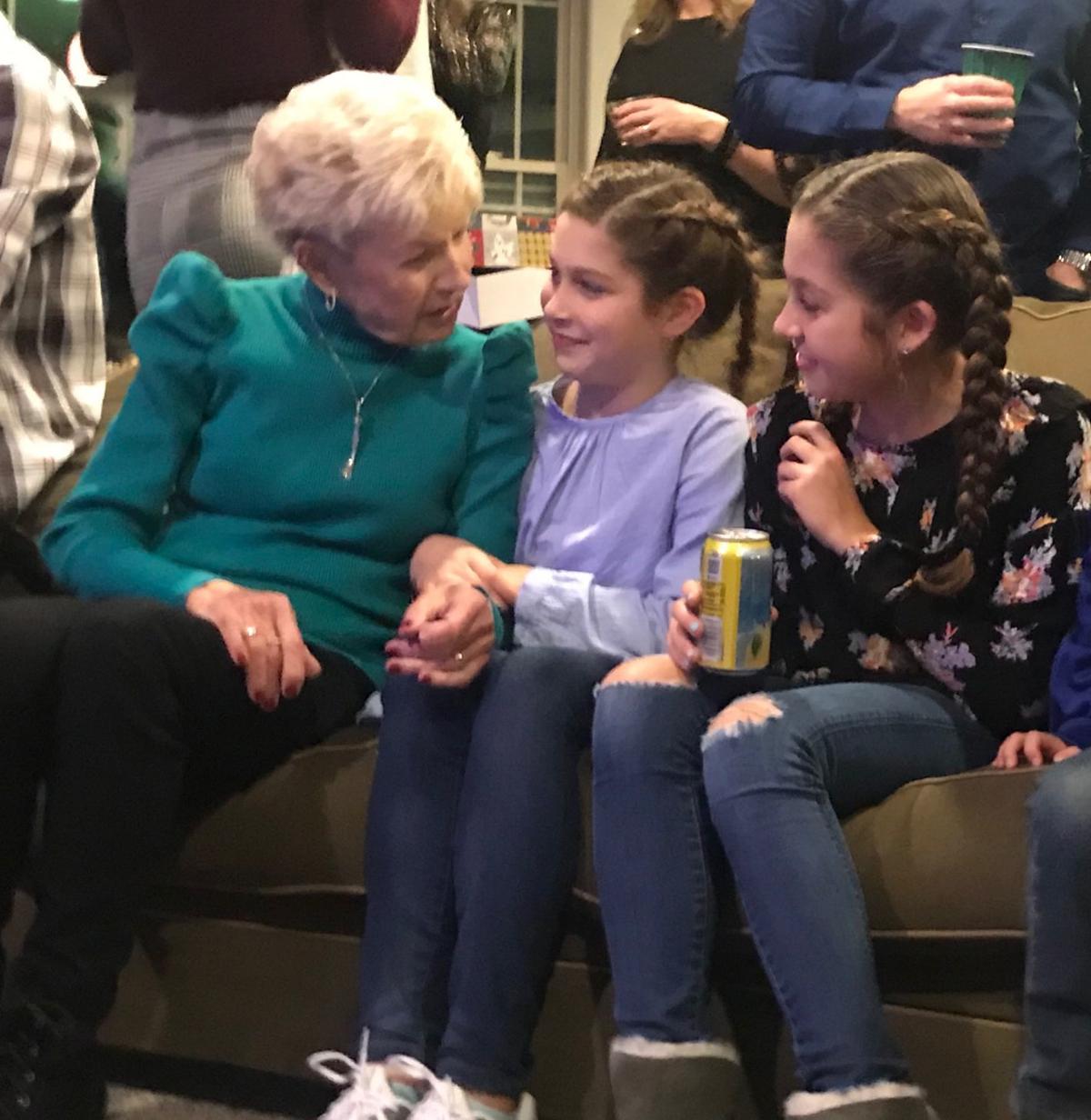 Lori Aiello engages in conversation with granddaughters Avery and Aleksa during Christmas 2019. 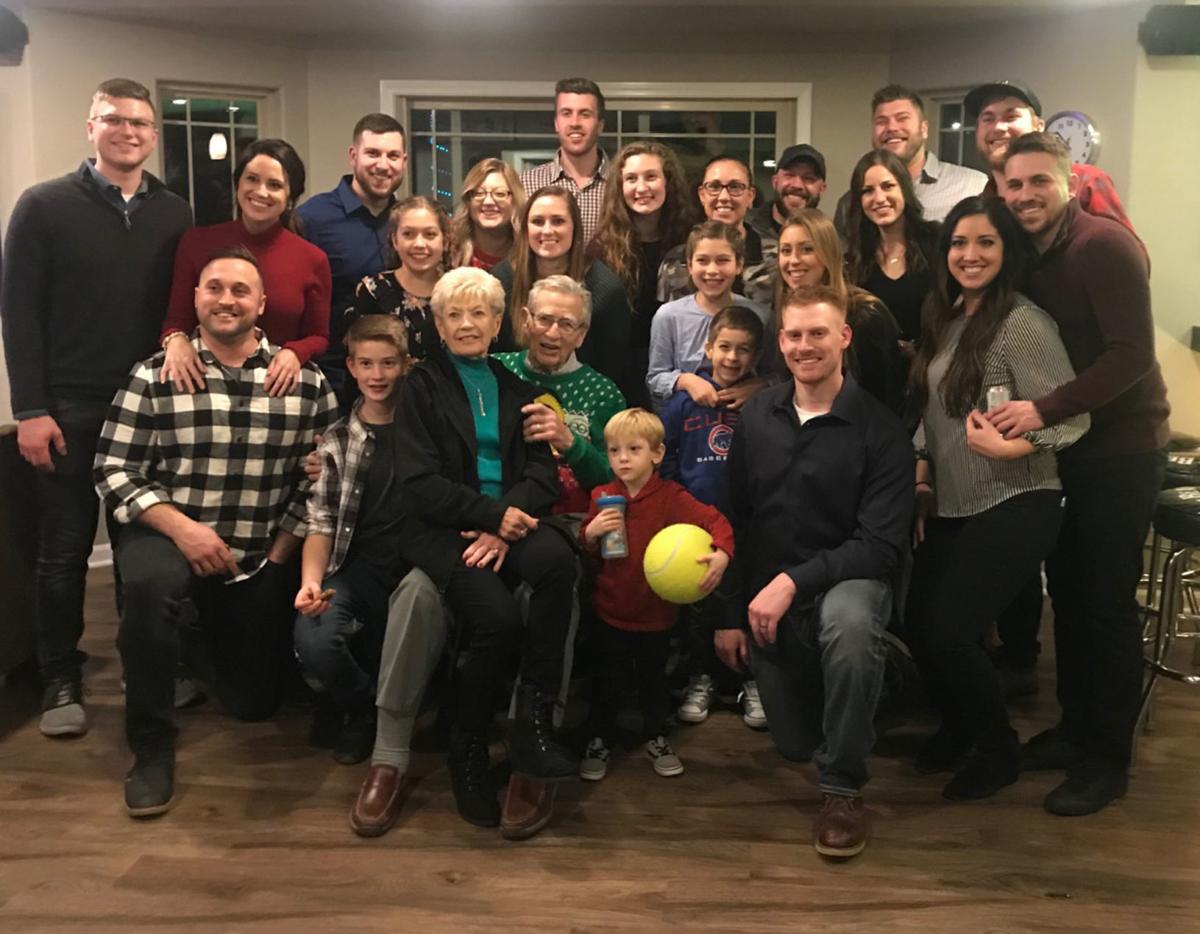 Lori Aiello, center, with husband Frank, surrounded by their grandchildren and one great-grandchild during Christmas 2019.

Lori Aiello was always on the go. When she wasn’t in the middle of caring for her seven children, she was making homemade raviolis for a local restaurant, working full time in women’s clothing retail or working out on home exercise equipment.

“She had a full-time job with family and when that was in its twilight got another full-time job,” noted her son, Andy Aiello. “She was very motivated; her work ethic second to none.”

Another unique trait of Lori’s was her ability to spend quality time with each of her seven children and 15 grandchildren.

“When you were with Mom, she had a very uncanny ability to be 100 percent focused on you. It was impressive how she could spend equal amounts time with each person no matter how big our family was,” Andy said.

Although she was always “a mom,” she was also “a hell of a lot of fun,” said her son, Bryan Aiello. “Her motto was, ‘You work hard, you play hard.’”

Delores “Lori” Dorothy Aiello, age 82, of Kenosha passed away March 20, at her home.

Lori was born June 20, 1937, in Burlington, to Ralph and Mildred Christman.

She began her education in Burlington. After her parents divorced, she and her siblings moved with her mother to Kenosha where Lori attended St. James School and later Bradford High School.

After graduating from high school in 1955, Lori found secretarial work at Great Lakes Navel Base in North Chicago.

She met Frank Aiello at a wedding, but shortly after they began dating Lori took a clerical job at Boeing in Seattle.

“She decided she wanted to do something different; she was an independent lady,” Frank said.

A year later, however, Lori returned to Kenosha to be with Frank.

“They kept in touch while she was away, but ultimately she knew she wanted to spend her life with my dad,” said her daughter Shelly Peltier.

While their kids were growing up, Lori kept busy and contributed to family finances by making homemade ravioli, which she sold to a local Italian restaurant. She also sold to people who put in their orders for her ravioli.

“I remember coming home to noodles draped all over the place,” Bryan said.

“And it wasn’t just pasta — everything she made was good, like her pies and Texas sheet cake,” noted her daughter Jayne Steinmetz.

Lori made sure to make each of her family’s favorite meals and desserts for their birthdays. For one it was a double chocolate cake with M & Ms; for others it was Lori’s apple slices or cherry pie.

Lori loved all holiday family get-togethers, especially Christmas, for which she made her signature ravioli.

“It was very important for her to have her children and grandchildren at her house for Christmas — for the food and for her ‘gifting,’” Ginny said.

Lori’s gifts were also chosen, wrapped and presented with care.

“She was in charge of handing out gifts, and each one was very personalized,” Bryan said.

Lori was also prolific with knitting and crocheting.

“She made prayer shawls for St. Mary’s Catholic Church and afghan blankets for newly married couples and babies in the family,” Ginny said.

Lori re-entered the work world in 1989 as a retail associate for Liz Claiborne at the Prime Outlets mall and for the next 22 years gave her all in customer service.

“She was good in the dressing room, helping customers and giving advice,” Karen said.

“She was always very put together and fashionable herself,” Ginny said.

Her personality also made Lori a good fit for retail fashion, said family.

“She had an engaging personality,” Ginny said.

When Frank retired in 1999, Lori decreased her work hours so they could travel to Florida during the winter months.

“She loved the sun and the casinos,” Molly said.

Where there was a social occasion, Lori was “the life of the party,” noted her family.

“She was so much fun,” Karen said. “She loved martinis and (bantering) with my sons.”

“She was the first person on the dance floor and the last one to leave,” Shelly said.

“There was the time she rode a mechanical bull at that graduation party,” recalled Bryan.

Lori also threw her energy into staying fit by working out at home on machines and free weights.

“She wore out a couple of treadmills,” Bryan said.

“She was up at 5 a.m. on her treadmill and was the last one to go to sleep at night,” Andy said.

“My kids went with her (to a gym) and came home saying, ‘Grandma’s an animal!’” Ginny said.

Lori’s go-getter attitude was an asset to those around her, said family.

“She definitely taught me about self-motivation: setting goals, reaching them and setting new goals,” Andy said.

“There was a spirit about Lori; she knew how to handle any situation, good or bad,” Frank said. “She was a great wife.”

“She would always say, ‘We’re going to have a positive attitude,’ and tried to instill this in us,” Shelly said.

Lori and Frank Aiello make a toast on their wedding anniversary in 2015.

Lori Aiello enjoying the sun on the beach in Sarasota, Fla.

Lori Aiello engages in conversation with granddaughters Avery and Aleksa during Christmas 2019.

Lori Aiello, center, with husband Frank, surrounded by their grandchildren and one great-grandchild during Christmas 2019.