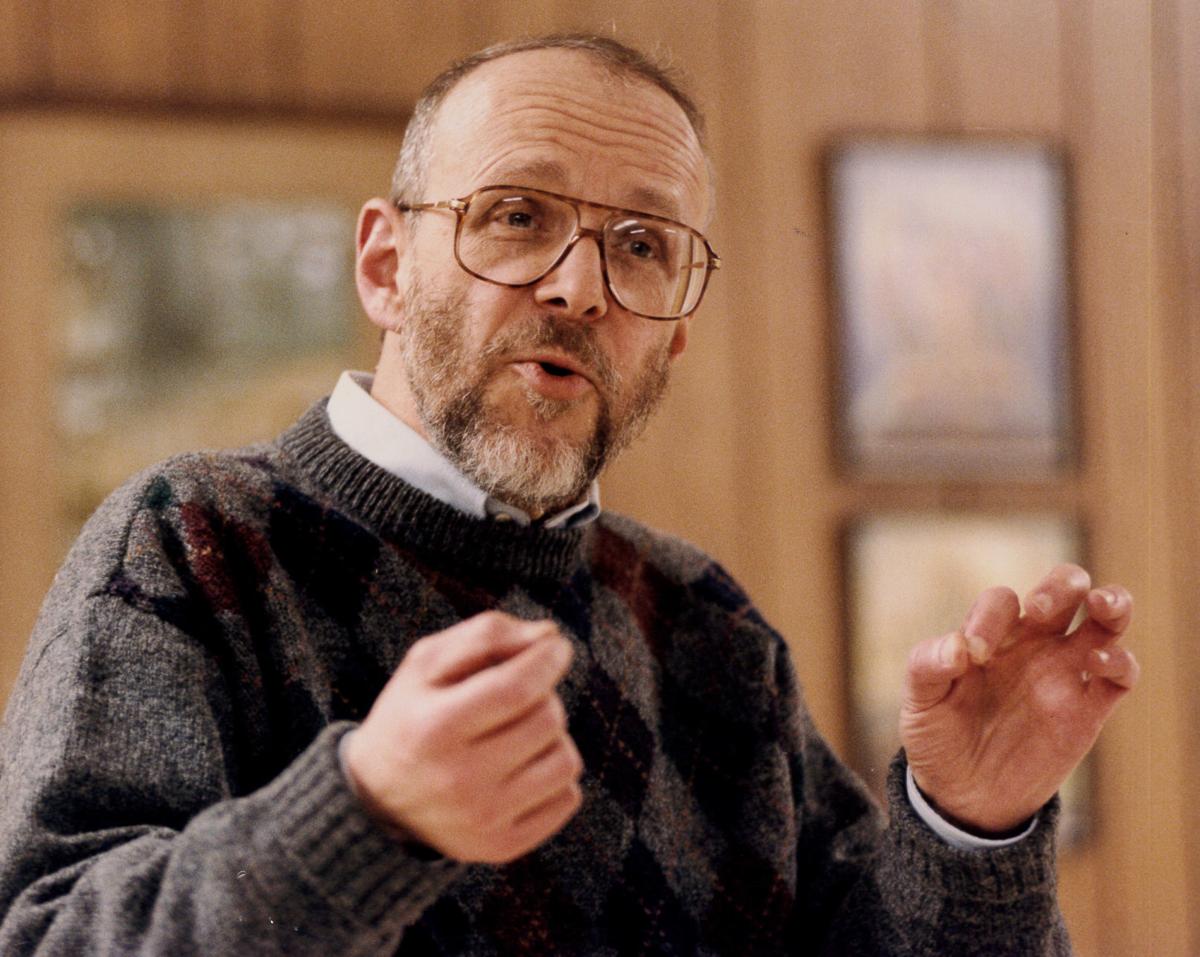 Rabbi Michael Remson in the midst of a public storytelling presentation at Beth Hillel Temple in 1996. 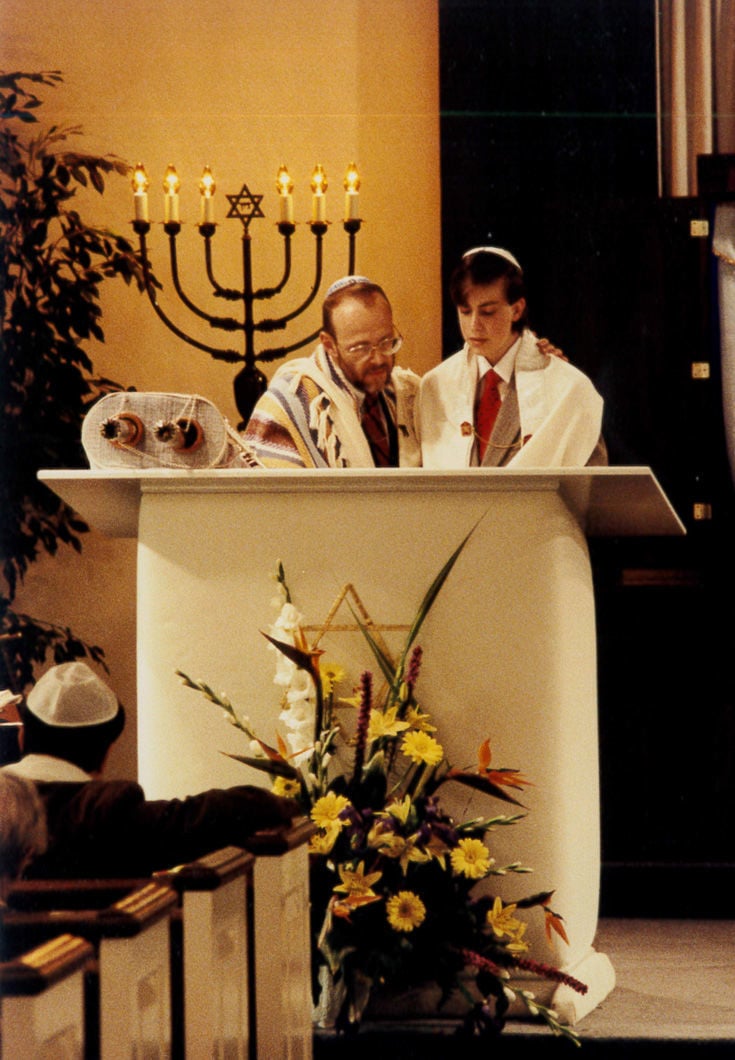 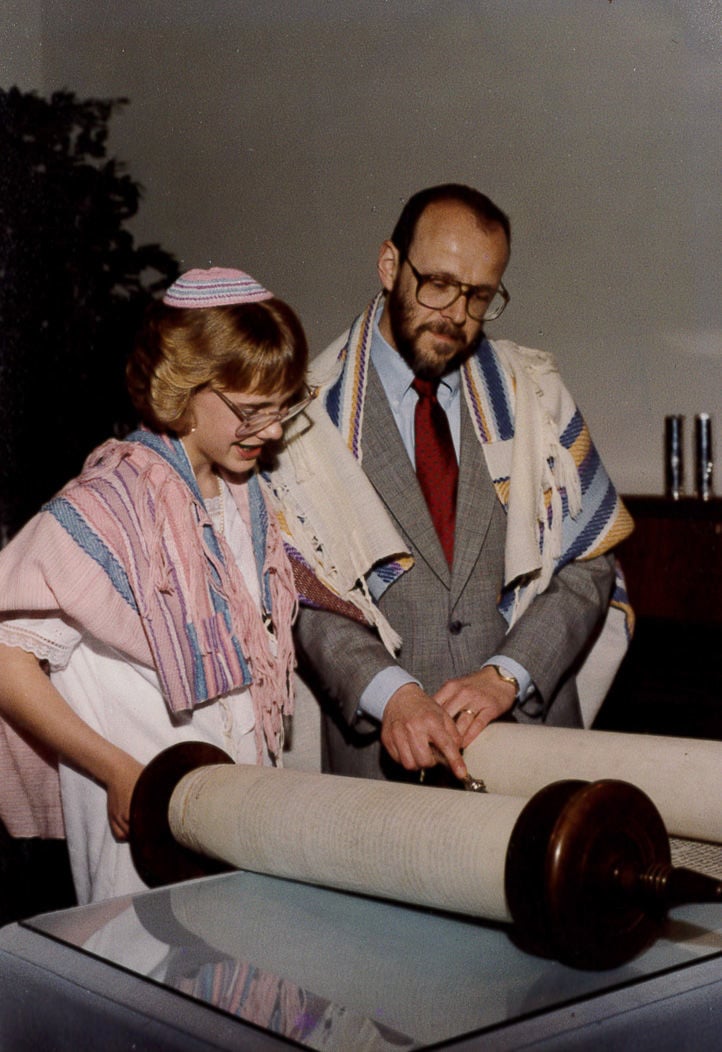 Left: Rabbi Michael Remson, right, reads the Torah with his daughter, Aviva, at her bat mitzvah. Right: One of Rabbi Michael Remson’s favorite roles in life was that of “Saba,” or “Grandfather.” Here he is pictured with granddaughter Margot (on his lap) and Lorelei (in back). 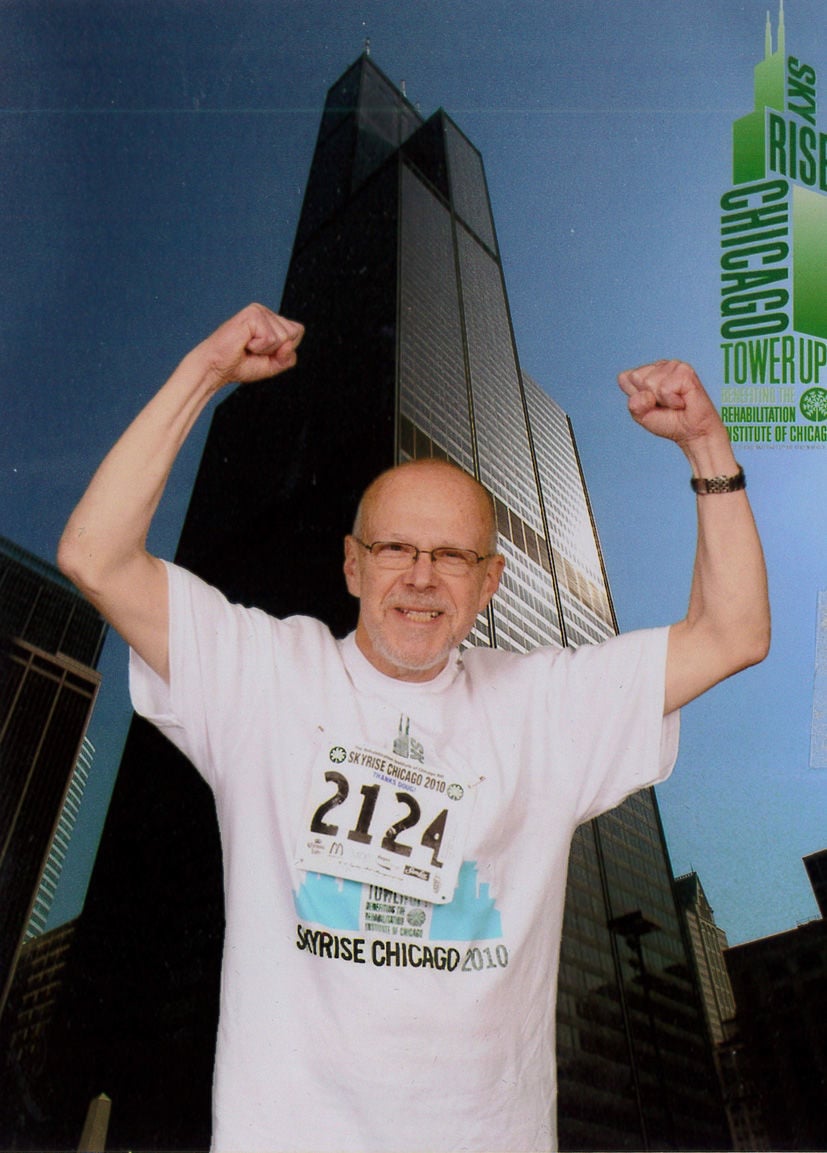 Rabbi Michael Remson after climbing the stairs to the top of the Willis Tower in Chicago in 2012. 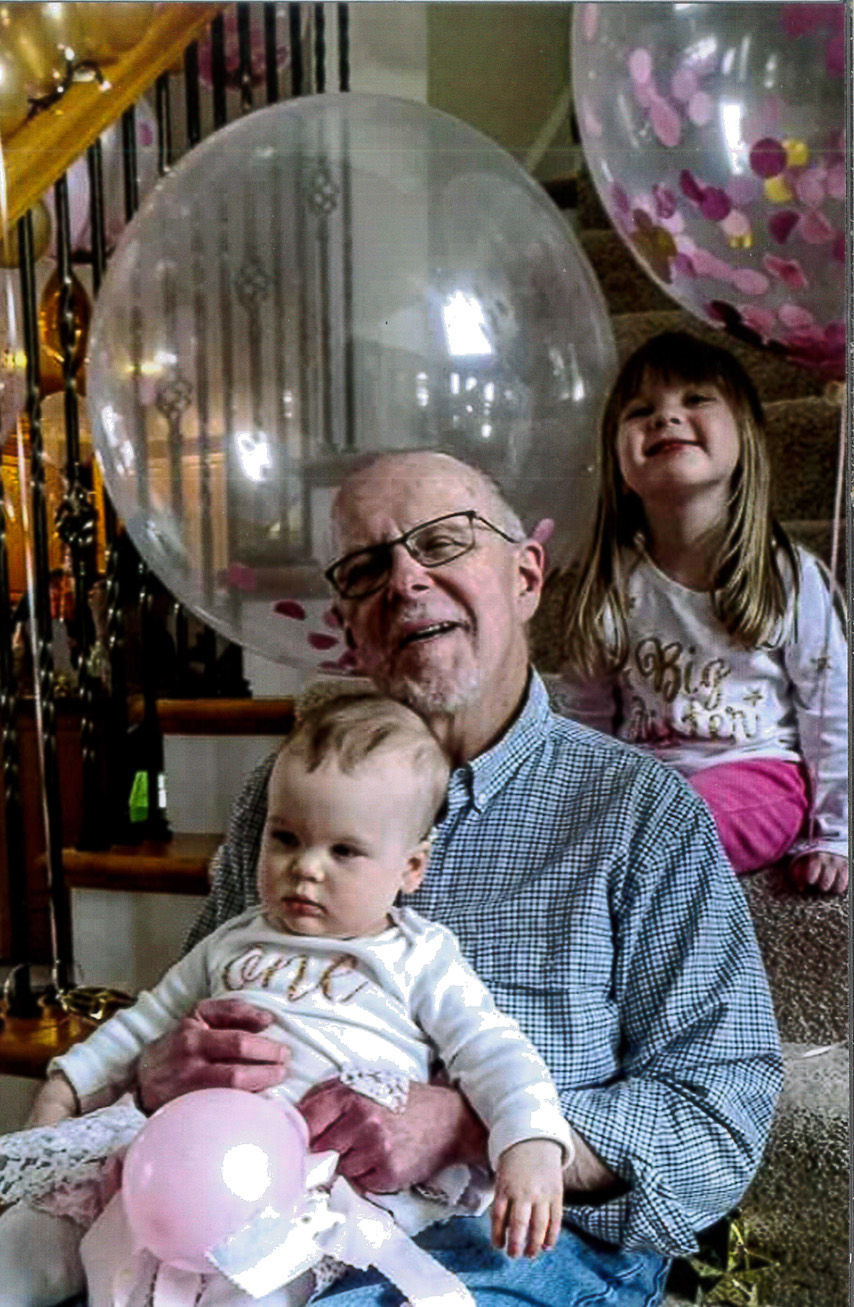 One of Rabbi Michael Remson’s favorite roles in life was that of “Saba,” or “Grandfather.” Here he is pictured with granddaughter Margot (on his lap) and Lorelei (in back).

Rabbi Michael Remson was not afraid to make mistakes or sing off-key.

“He learned from his mistakes; they made him stronger,” said his wife, Susan Remson.

He was a rabbi committed to Judaism but open to interfaith conversations. “He was logical, clear-thinking, compassionate,” she said.

Michael was rabbi at Beth Hillel Temple in Kenosha, active with Congregations United to Serve Humanity and a founding member of the Tri-County Area Liars, Elaborators and Storytellers, a.k.a. T.A.L.E.S.

He was also interim rabbi for congregations around the country, where he acted as a catalyst for healing and growth.

Whether it was climbing a skyscraper staircase or bringing new life to a struggling congregation, he was all about new challenges, Susan said.

Rabbi Michael M. Remson, 75, of Kenosha, died unexpectedly Jan. 8 at his residence. He is survived by his wife Susan, his daughter Aviva (Dan) Zupancic, his son Benjamin Remson and his granddaughters Lorelei and Margot.

Michael was educated in the schools of Buffalo. After high school, he attended the University of Buffalo for engineering, but it didn’t take, said Susan.

He went to work at a bank for a while before working at and then attending Canisius College, a Jesuit school where he majored in business.

This was also where Michael came into contact with religious readings of his faith, Susan said.

He graduated from Canisius in 1967, and spent a year doing community organization with VISTA in Wilmington, Del.

After studying with a rabbi in the Wilmington area, in 1968, he began attending Hebrew Union College in New York.

Michael married Susan Kotick June 22, 1969, whom he had known in Buffalo. They spent the first year of their marriage in Israel as Michael continued his rabbinical studies.

After he was ordained in 1973, Michael came to Kenosha to serve at Beth Hillel temple.

“Kenosha was a good match for him — it was an independent congregation and Kenosha was just a half-day away from family,” Susan said.

As Michael engaged in his vocation, he called upon the skills and traditions of storytelling, a talent he attributed to his grandfather who emigrated to America from the Ukraine.

Michael, along with local storytellers Mary Norris, Lucy Beck and Tom Clark formed T.A.L.E.S. and performed at various venues in the area.

“I remember Michael sharing wonderful stories from the rich traditions of Jewish folklore,” said Tom Clark. “They were magical. His stories transported you to a different time and place in your imagination. He did this with a (seemingly) effortless style and demeanor.”

When interviewed for a news story in 1998, Michael said, “I’ve never had a talent for painting or music, but I discovered that I loved telling stories and found I was really quite good at it.”

“His storytelling was memorable for those who heard him,” agreed Susan.

For the next 19 years he shepherded the congregation through enormous growth, Susan said.

When he decided it was time for the next adventure, Michael trained as an interim rabbi through the Interim Ministry Network.

“The IMN invited Michael to train with it as it had not previously trained rabbis for this work,” Susan said.

Of these positions, Michael was most proud of his connection with Rodef Shalom Congregation in Pittsburgh. After seeing the congregation through challenges, he was presented a parting gift inscribed, “Rabbi, Conciliator, Friend.”

Susan said that Michael’s skill was not being the glue, but a catalyst for the religious communities he served. “He left congregations for them to carry on on their own,” Susan said.

He was able to remain objective and speak his mind, Susan said. “He wasn’t afraid to say something unpopular.”

In 2004, Michael and Susan moved back to Kenosha and Micheal worked for a while as an interim rabbi in Highland Park, Ill. He also conducted training seminars and worked as a consultant for IMN.

“He loved the group,” Susan said.

Woodworking as a hobby

To relax, Michael took up woodworking through the Kenosha Senior Center. “He loved it and made friends. There he wasn’t ‘Rabbi Remson,’ he was just ‘Michael.’”

Continuing his interest in interfaith concerns, Michael joined and became president of Congregations United to Serve Humanity and served on the transportation board.

He also returned to Beth Hillel, this time as a congregation member.

Rabbi Dena Feingold says she appreciated Michael’s collegiality as a rabbi familiar with the congregation.

“It was a wonderful thing for me to have him in the congregation — as a backup when I was away, leading services or pastoral care,” she said.

He was a supporter of the temple’s interfaith scholar program and an active participant in the Torah study group.

He also contributed ideas for programming, she added. “He had a wonderful way of sharing ideas but not imposing them.”

He wasn’t much for physical fitness, but exercised and took yoga to improve his balance because he knew it was good for him, Susan said.

To celebrate his 65th birthday and “just to shake things up a bit” Michael decided to participate in a fundraiser stair climb to the top of the Willis (formerly the Sears) building.

“He was very proud of climbing those 101 stories,” she said.

Focus on family in final years

In the last couple of years, Michael’s life was all about his two granddaughters, Margot and Lorelei, Susan said. “He was called ‘Saba,’ which means ‘Grandfather’ in Hebrew,” she said. “He loved being Saba.”

Michael was on the quiet side, said Susan. “But he always spoke his mind when there was something to say.”

Michael was aware of any shortcomings he had and made light of them, said Susan. One of those was singing. Although Michael could chant the Torah at temple, singing he couldn’t do, she said.

“The joke was that Michael taught many children how not to sing,” Susan said. “But he made it OK not to sing well.”

Here are the obituaries published online and in the print product of the Kenosha News between Jan. 27 and Jan. 30, 2020.

Rabbi Michael Remson in the midst of a public storytelling presentation at Beth Hillel Temple in 1996.

Left: Rabbi Michael Remson, right, reads the Torah with his daughter, Aviva, at her bat mitzvah. Right: One of Rabbi Michael Remson’s favorite roles in life was that of “Saba,” or “Grandfather.” Here he is pictured with granddaughter Margot (on his lap) and Lorelei (in back).

Rabbi Michael Remson after climbing the stairs to the top of the Willis Tower in Chicago in 2012.

One of Rabbi Michael Remson’s favorite roles in life was that of “Saba,” or “Grandfather.” Here he is pictured with granddaughter Margot (on his lap) and Lorelei (in back).