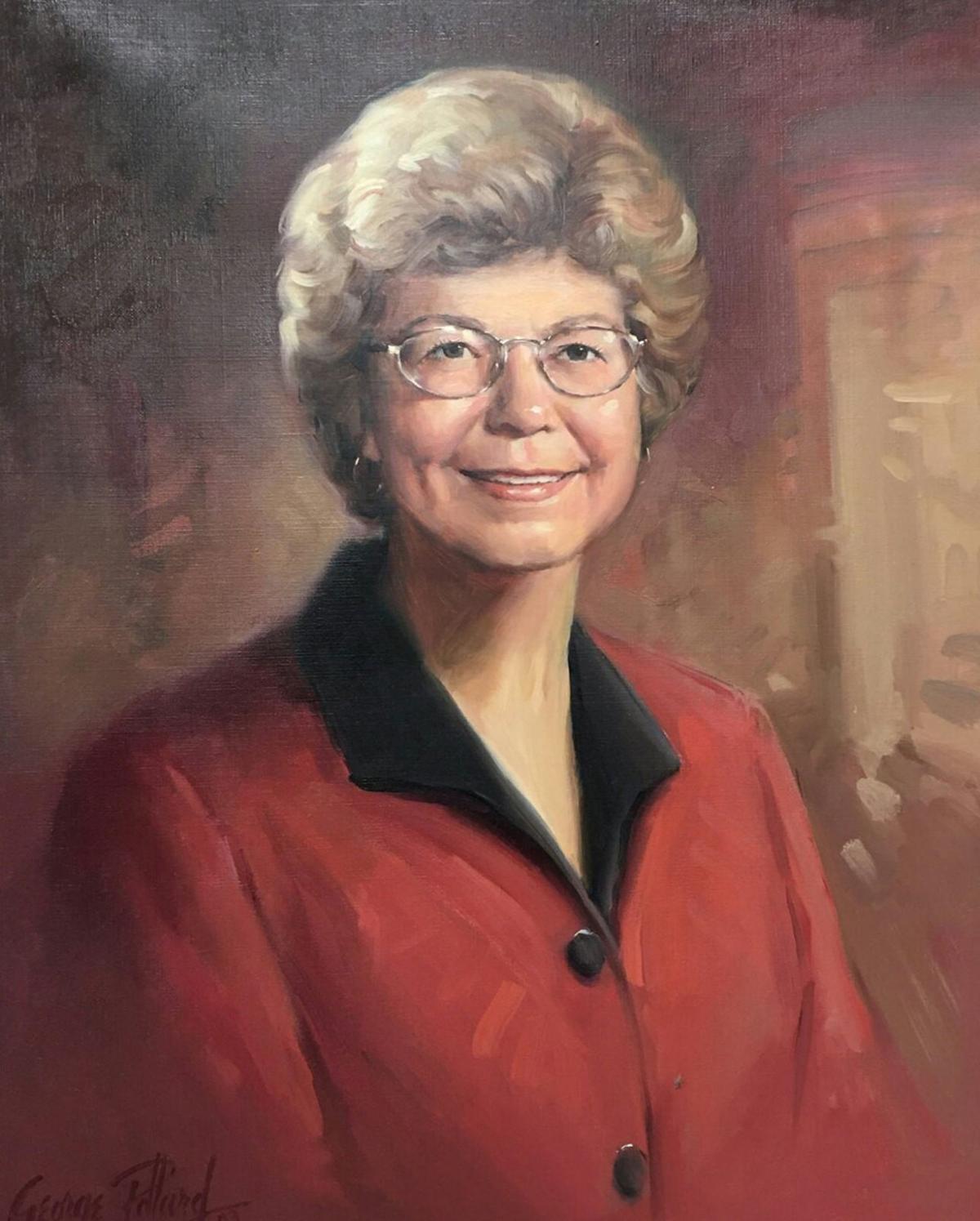 A portrait of Ruth Johnson displayed on the walls of Carthage College. 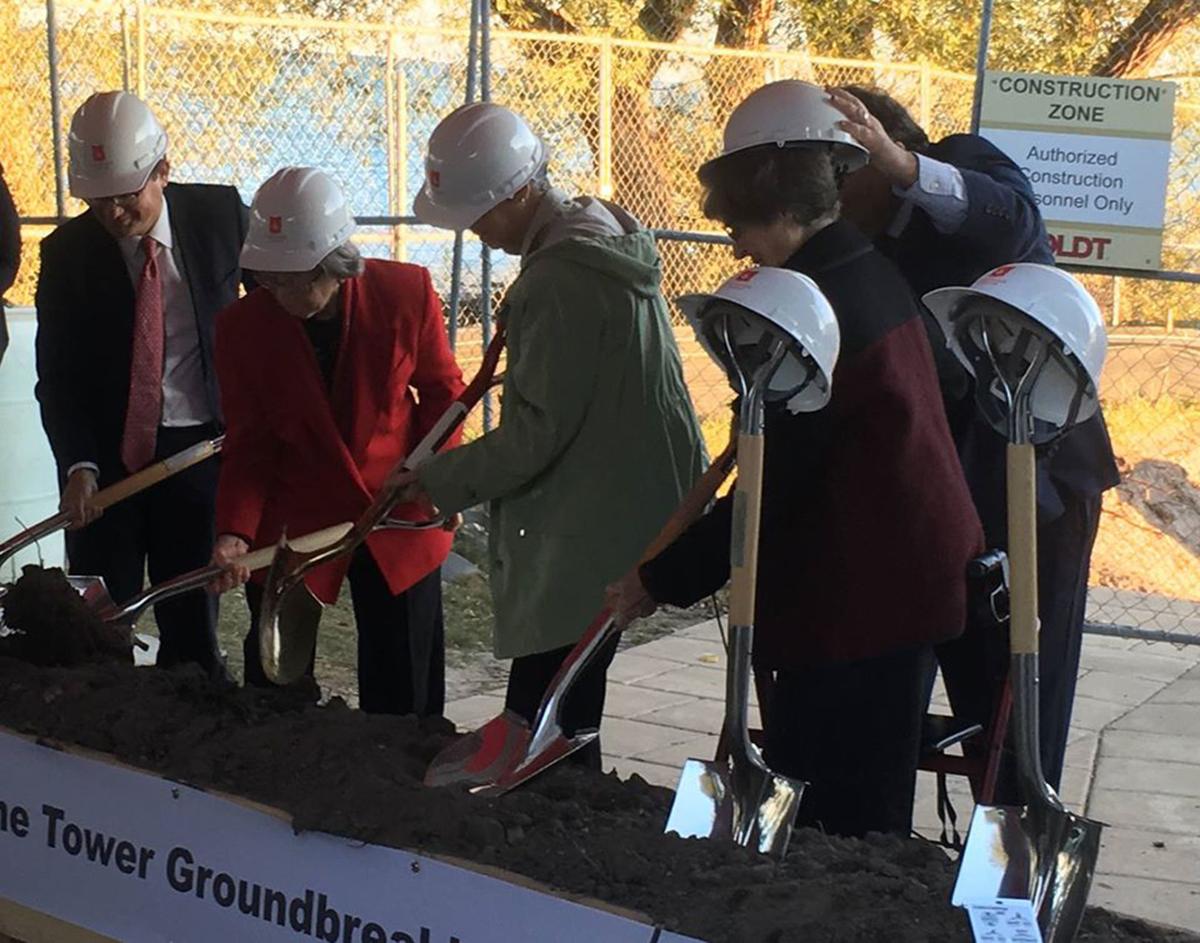 Ruth Johnson and Carthage alum known as “the legacy ladies” made it a point to attend the groundbreaking ceremonies of new buildings at Carthage. Pictured here at the groundbreaking for Tower Residence Hall in 2017 from left, Carthage President John Swallow, Irma Anderson ‘48; Ruth Johnson, ‘84; Beverly Keller, ‘61, and Bill Hoare. 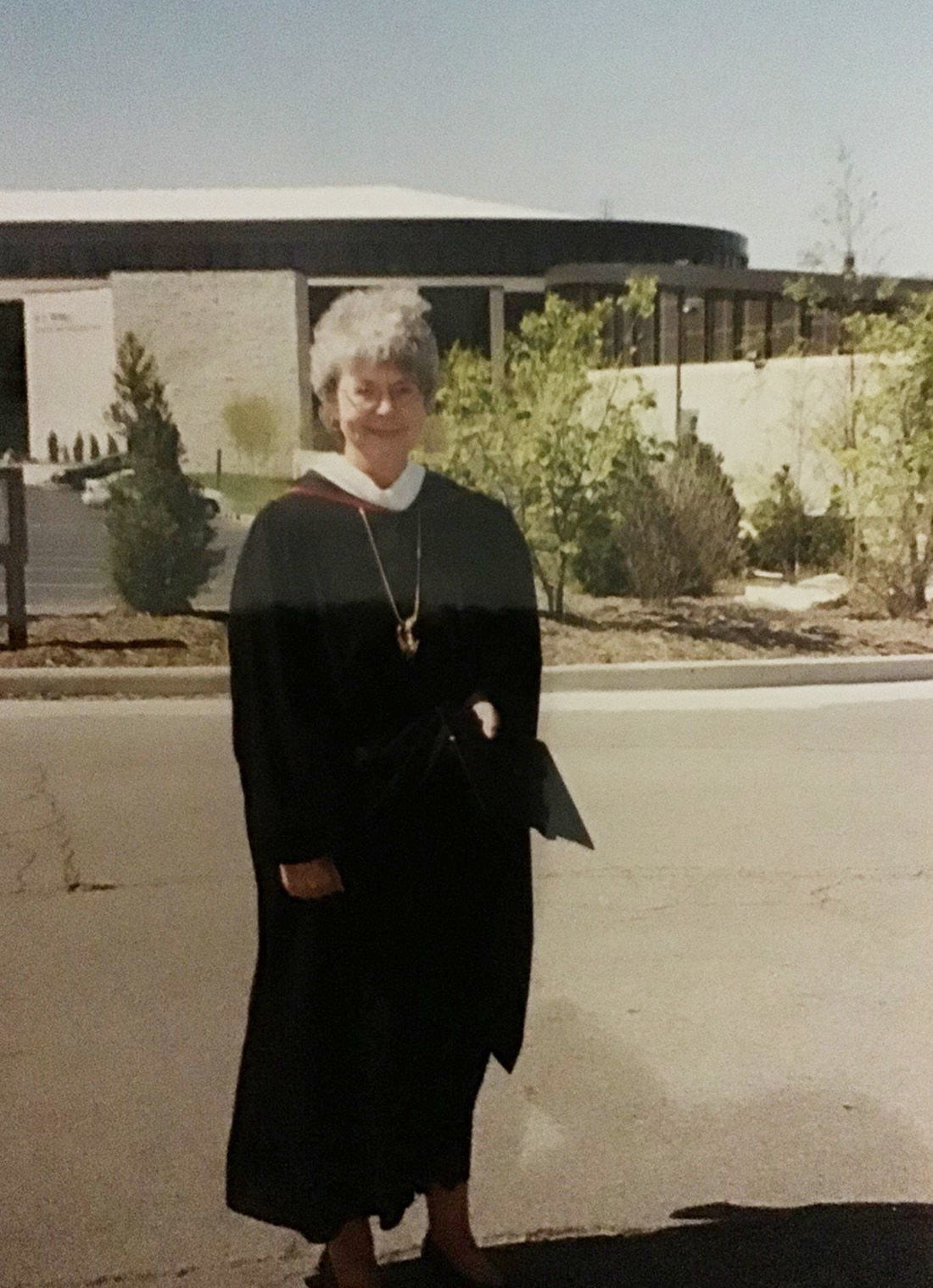 Ruth Johnson in 2000 on the day she received The Carthage Flame award. 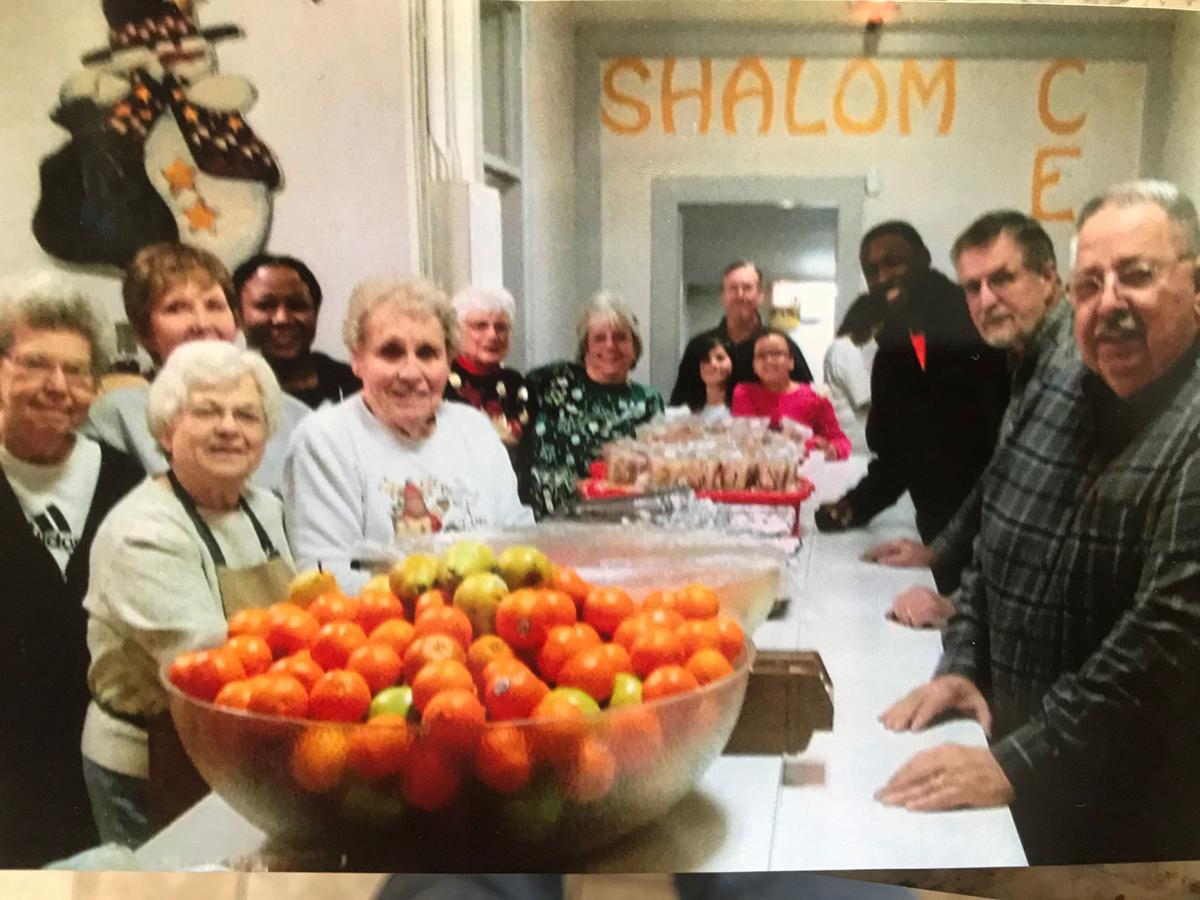 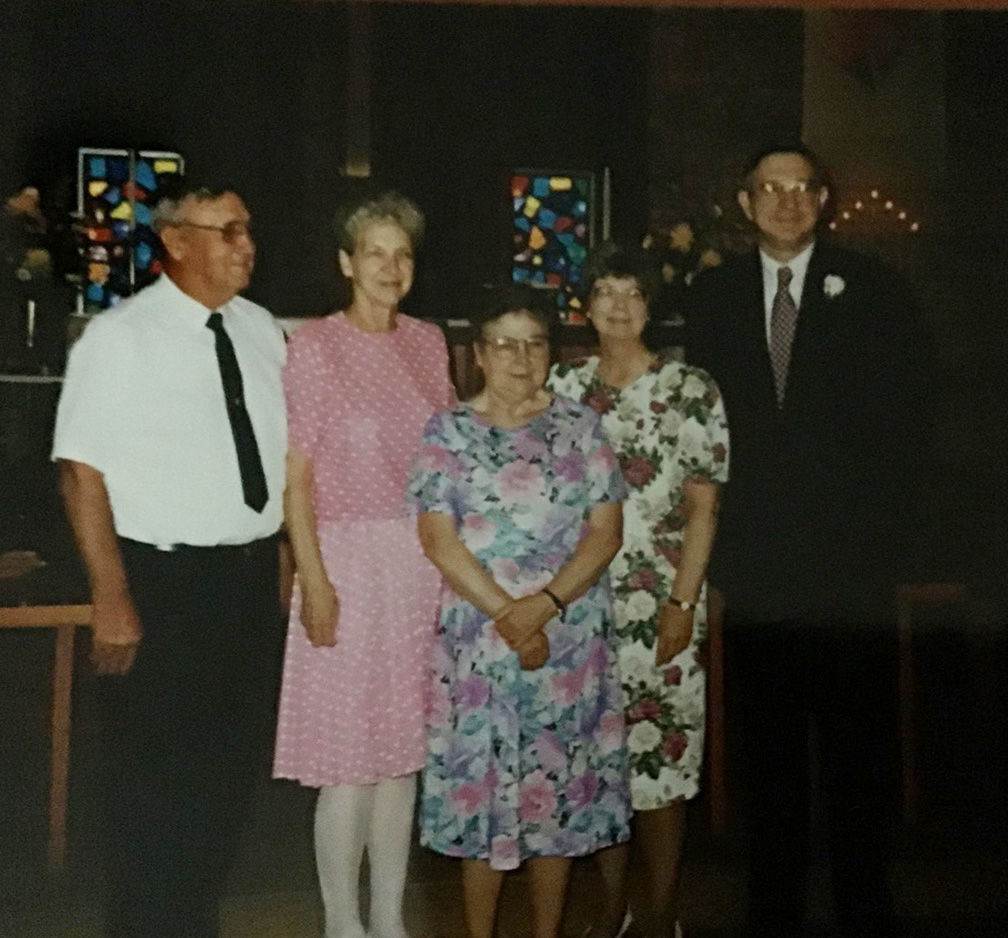 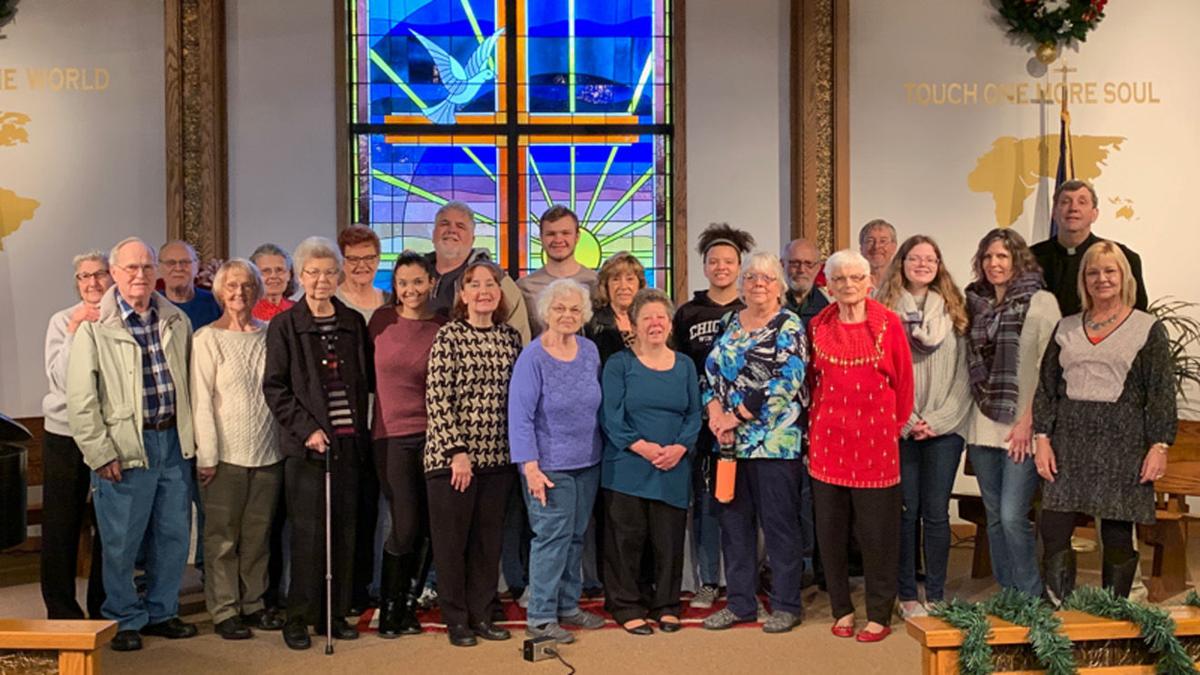 The congregation of Holy Nativity Church on the day of its final service, Dec. 29, 2019. Ruth Johnson, front row, third from the left.

“She was the first employee Carthage hired when it moved to Kenosha,” noted her brother, James Johnson.

“She was extremely good at what she did — patient and painstaking with accuracy — but she had this wonderful human side as well,” said Kurt Piepenburg, professor of geospatial science and former Carthage College provost.

Ruth drew on her longtime experience in the registrar’s office to be able to predict “within 20 or 30 students” student enrollment numbers each fall, Kurt said.

As an adult, Ruth attained a degree in art history, setting an early example for other non-traditional learners.

“She was a pillar of stability in the administration of the college,” said Carthage President Emeritus Greg Campbell. “If a person knew Ruth, that person also automatically knew more about Carthage.”

Ruth was also a trailblazer, particularly in the Lutheran church, noted James.

“She was first the women to help serve communion in the state of Wisconsin and first female board member,” he said. “She was a pioneer.”

“She led by example; that was one of the most endearing qualities about her,” said Ed Carlson, a fellow parishioner of Ruth’s at the former Holy Nativity Lutheran Church.

“She was all around a super lady,” he said.

Ruth A. Johnson, 82, Kenosha, died Jan. 21 at Froedtert Kenosha Campus. She is survived by her brother, James (Susan) Johnson.

Ruth’s association with Carthage began, literally, at birth. The daughter of Johannes and Kate Johnson, Ruth was born Aug. 17, 1937, at “a private home” in Carthage, Ill. The family lived on a farm outside of Carthage, and after attending local schools, Ruth went to business college where she studied secretarial skills.

As the college moved to Kenosha in the early 1960s, Ruth moved with it, helping establish the registrar’s office even as construction continued.

Ruth started as an assistant in the registrar’s office with the title “recorder,” James said. To attain status as a full-fledged registrar, however, she needed a degree, he added.

While working full time, Ruth studied art appreciation and attained her bachelor’s of arts in 1984.

“She was not afraid of stepping forward if something needed to be done,” James said. “She wasn’t a wallflower. From early on, she was a go-getter.”

“She was a phenomenal woman with an extraordinary mind for detail which you need in administration,” Kurt said.

Ruth was also committed to the students. “She was very passionate to help students in academic difficulty find options and resources,” Kurt said.

“In many ways, Ruth Johnson personified the Carthage mission,” said Carthage President John Swallow. “As one of the first Carthage staff on the ground in Kenosha, as a student- and faculty-oriented administrator, and as a nontraditional student, she modeled the Carthaginian spirit.”

Part of a family

Ruth’s other family was Holy Nativity Lutheran Church, of which she was a charter member.

She sang in the choir, taught Sunday School, ran the church’s scholarship committee and volunteered at the Shalom Center Soup Kitchen.

She assisted in the process as Holy Nativity merged with St. John’s Lutheran and later became Lakeside Lutheran Church.

“I thought it was neat that she was there for the very first service and the very last one,” Ed said.

In 1972, Ruth was elected Wisconsin’s first woman council president of the Lutheran Church.

When he became church council president, Ed says he often sought Ruth’s advice. “I ran things by her. If it passed ‘the Ruth test,’ I’d go with it.”

Church member Casey Aicher said that Ruth helped him attend Carthage through her enthusiasm for the school and scholarship resources.

“She said I’d be a good fit (for Carthage,)” he said. “Without Ruth, I may have very well ended up not believing in myself and my school of choice.”

In 2000, Ruth received the Carthage Flame for her service to the college and the Kenosha community.

After retiring in 2002, Ruth remained engaged with her alma mater. She and fellow alumnae, Beverly Keller and Irma Anderson, became known as Carthage College’s “legacy ladies,” attending groundbreaking ceremonies for every new facility on the Kenosha campus.

“She lived the life that she wanted and touched a lot of people,” Ed said. “The things she did will go on long after we’re gone and forgotten.”

A portrait of Ruth Johnson displayed on the walls of Carthage College.

Ruth Johnson and Carthage alum known as “the legacy ladies” made it a point to attend the groundbreaking ceremonies of new buildings at Carthage. Pictured here at the groundbreaking for Tower Residence Hall in 2017 from left, Carthage President John Swallow, Irma Anderson ‘48; Ruth Johnson, ‘84; Beverly Keller, ‘61, and Bill Hoare.

Ruth Johnson in 2000 on the day she received The Carthage Flame award.

The congregation of Holy Nativity Church on the day of its final service, Dec. 29, 2019. Ruth Johnson, front row, third from the left.