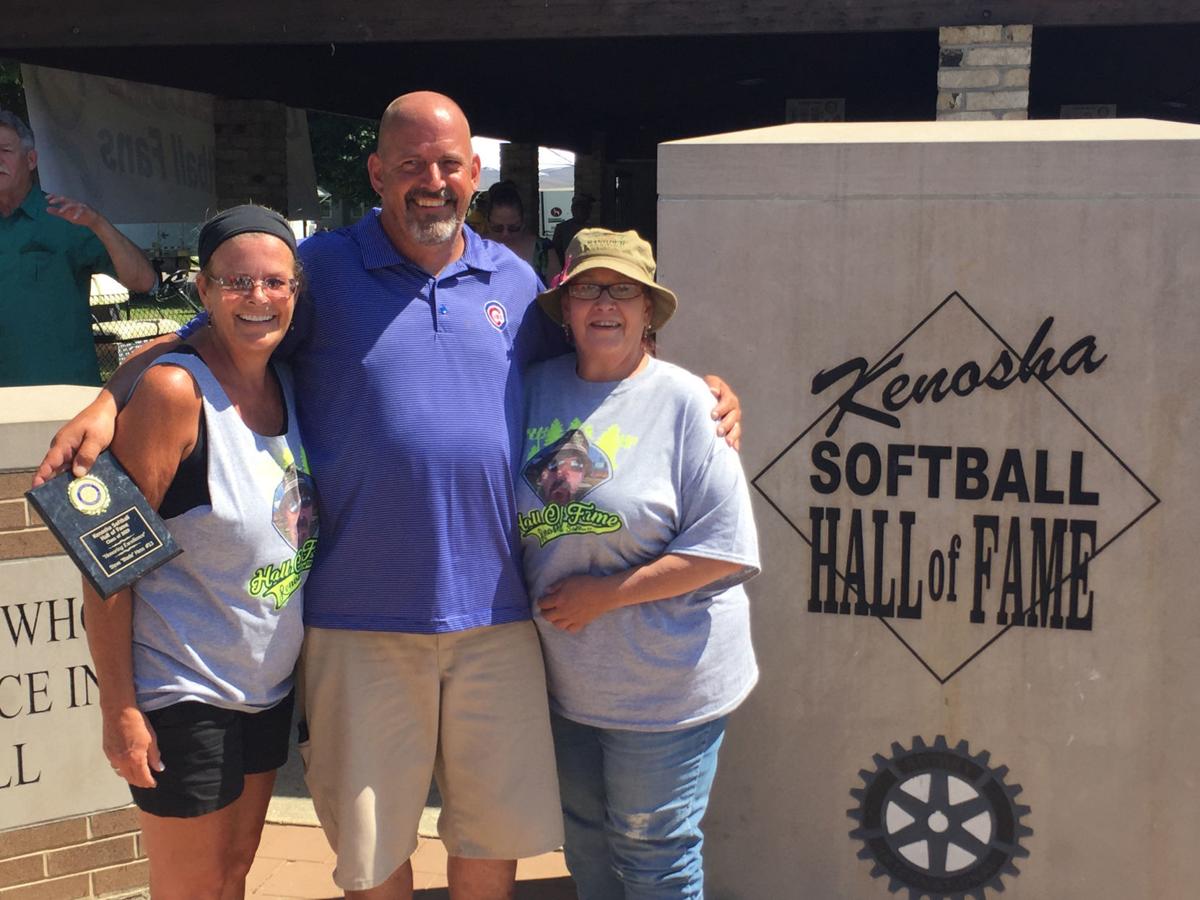 Steve Hess last July when he was inducted into the Kenosha Softball Hall of Fame. With him from left are his sisters, Shari and Lindy. 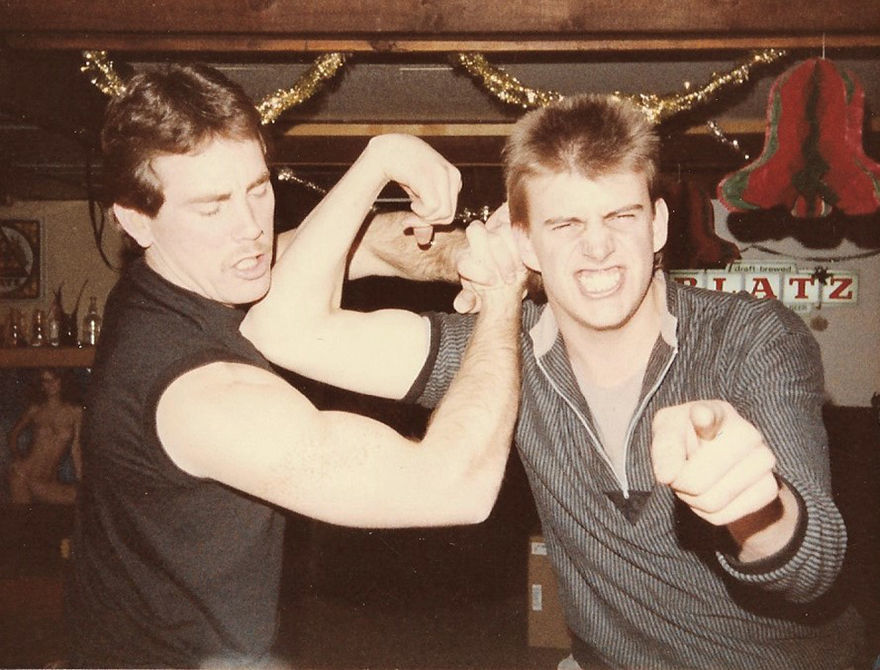 Steve Hess, right, sporting his Billy Idol look, and friend John Thomsen ham it up for the camera at a New Year’s Eve party in 1983 or ‘84. 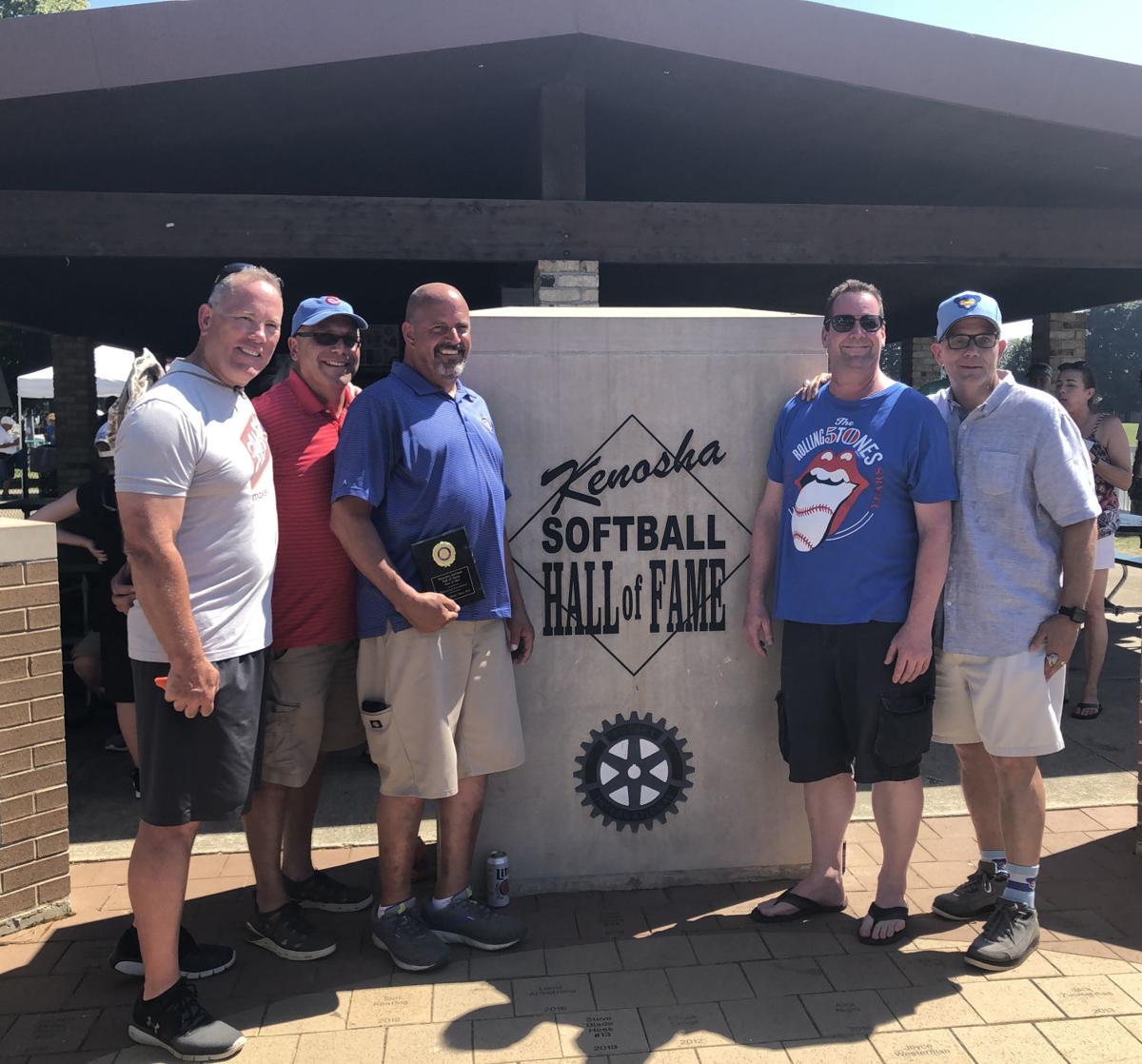 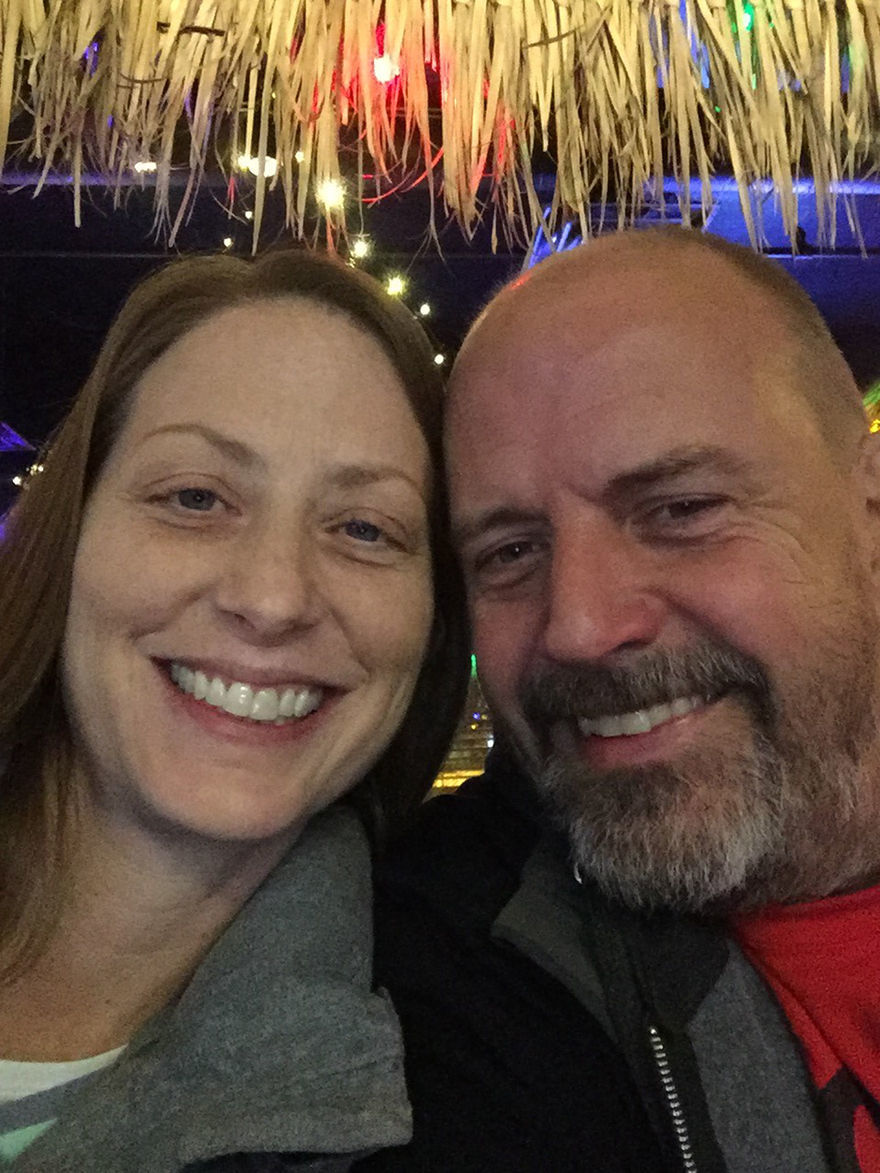 Steve Hess and his wife, Amy. 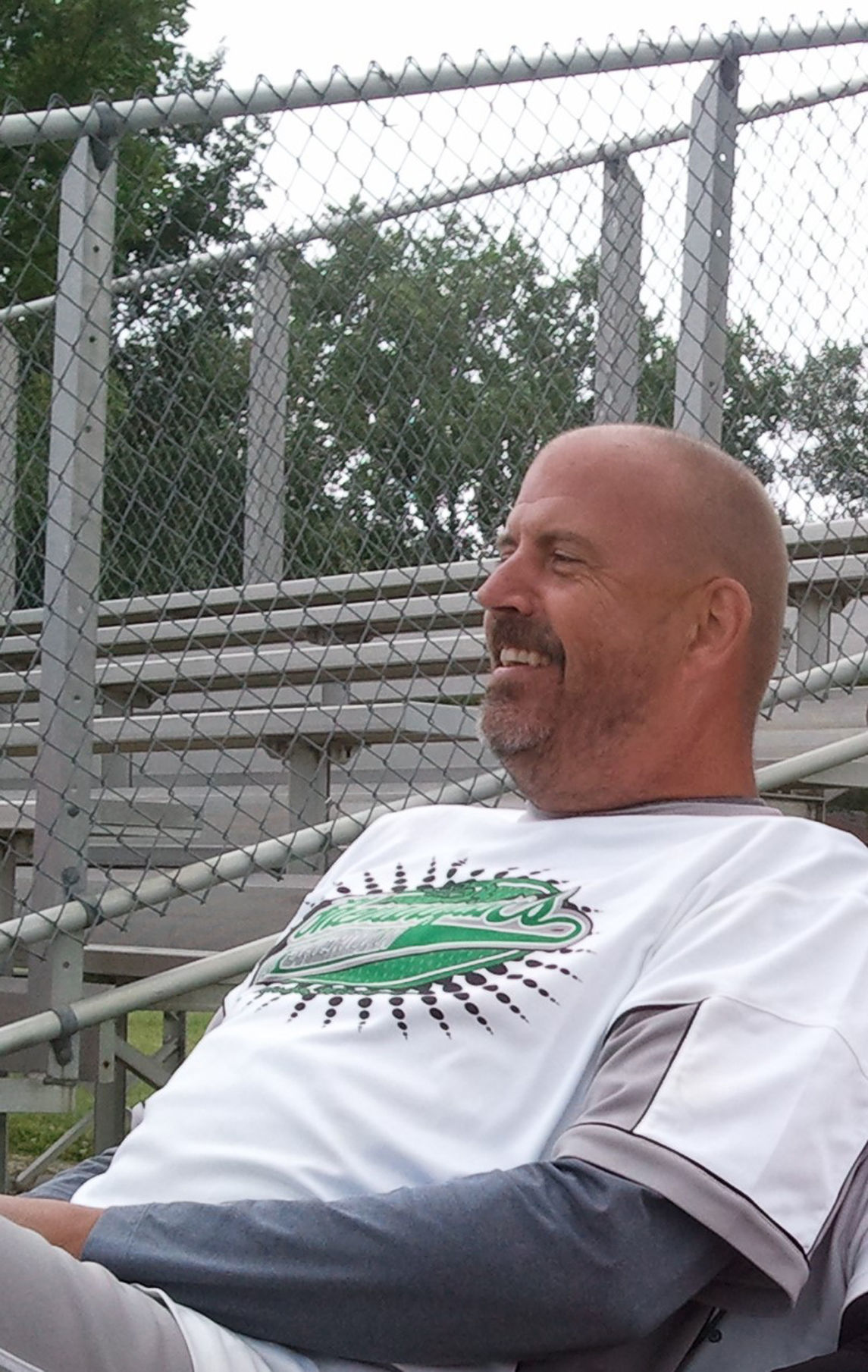 Steve Hess at the ballpark. 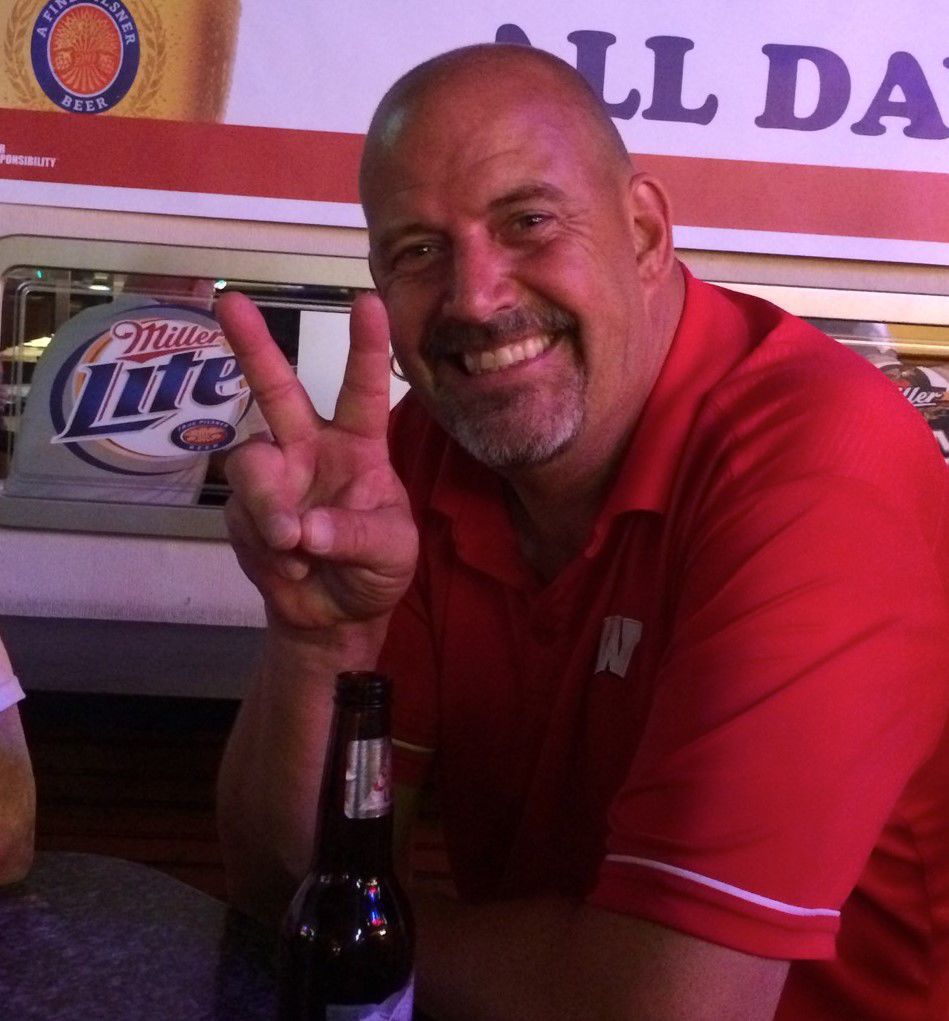 Steve Hess was nicknamed “Blade” and played softball like a “Swiss Army knife.”

He earned both nicknames, and others, by playing softball in Kenosha for over 35 years.

“He excelled whether in the infield or the outfield, remembering the hitting styles of his opponents and adjusting his positioning accordingly everywhere from right field to third base.”

“Steve could play any position; he was extremely talented at anything he did,” agreed Dave Hamelink, Jr., friend and manager at Sunnyside Club.

“The man was incredible,” said former teammate Chris Wade. “He was the consummate teammate; and an even a better person.”

Early on in his softball career Steve became known as “Blade.”

“It may have been because he was thin as blade of grass, sharp like a knife or because when he dyed his hair blonde he looked like Rutger Hauer in ‘Blade Runner,’” Chris said.

Over the years Steve played softball with teams including The Dons and the Sunnyside Highlifers.

“He was a helluva baseball player and great, all around guy; very level headed,” said Sunnyside Club owner, Dave Hamelink, Sr. “He was also always ready to help—at the head of the pack with fundraising.”

Playing ball at Lincoln Park for teams sponsored by Sunnyside Club earned him more titles including “the Mayor of Lincoln Park” and “the mayor of Sunnyside.”

Steve’s sports honors included “playing officially for 13 teams and being a ringer on scores of others,” Gary said.

He was on teams that won city titles and Rotary tournaments and, in 2019, was inducted into the Kenosha Softball Hall of Fame.

Steve “played hard, fundamental baseball,” Gary said in a speech he made at the induction ceremony.

“He was a really hard worker — he cared about the jobs he had and wanted them to be done right,” said his wife, Amy Hess.

Amy says Steve was “a thinker who had total common sense and street sense.”

Steven P. Hess, 54, of Pleasant Prairie, died May 16, at his home from complications due to pancreatic cancer.

Steve was born Oct. 11, 1965, in Kenosha, the son of Carolyn and Larry Hess, Sr. He attended local schools, graduating from Tremper High School in 1983.

Steve’s love of sports began early — playing baseball with friends in the neighborhood of Roosevelt Road and 47th Avenue.

“We played a lot of baseball — leagues or tennis balls or rubber balls — in that neighborhood,” Gary said. “We built our own diamond behind his house that we called ‘Field Field.’”

Gary says he taught Steve how to bat correctly. “Steve started his sandlot career somewhat inauspiciously — he batted cross-handed. I showed him how to do it right … and…no time he got better than me.”

After high school, Steve worked various jobs until he began working in the hardware industry. His most recent job was as a warehouse manager with Illini Hardware Corporation in Bristol.

“I was working at a gas station when he came in one morning to pay for his stuff. I looked up and something hit me like lightening,” she said.

After “admiring him from afar” for a few months, she engaged him in conversation, and they began dating.

Although Amy didn’t share Steve’s love of baseball to the level he did, they bowled on leagues together.

“When I met him, he was playing softball five days a week,” Amy said.

Steve played on city teams for taverns including Shenanigans, the former Rumors Lounge and Sunnyside Club. He stepped in on teams that needed an extra man and was known as a clutch player for his ability to stay cool under pressure.

Playing ball with The Dons in the 1990s, Steve enjoyed creating a scene with his hairstyles. “He’d show up for Friday night Rotary games with some goofy hairstyle, and people showed up just to see what crazy thing he was doing to his hair,” Chris said.

“He became one of the city’s most colorful slowpitch characters,” Gary said. “He was Billy Idol or Blade depending on how much hair he had.”

The Dons became known for their colorful antics, but were also serious players, Chris said. “We were the loud party crew that won games.”

When it came to winning, Steve was all business, he added. “He would be a general on the field — he would mold us and teach us constantly.”

Steve was more than a ball player, he was a mentor, said former teammates.

“He never wanted to lose and wanted you to pick yourself up on or off the field,” Chris said.

Over the years, Steve moved from playing competitively to playing with friends “just to be around people,” Amy said.

“Even when Steve said he wasn’t going to play anymore, he did anyway,” Amy said. “He’d say, ‘This is the last year,’ then the next year he’d be talking with friends and all of a sudden he’d be playing again.”

People enjoyed Steve’s company as much as he did theirs, said family and friends.

“He knew a million people,” Amy said. “He was easy to connect with and talk to. He was a people pleaser.”

“You met him for five minutes, and he was your friend for life,” Chris said.

But Steve was humble, added Amy. “He didn’t talk about himself much; he just liked being around people and hearing their stories.”

“Steve was a competitor who made you better,” Chris said, “as a player and a person.”

Lil' Ed and The Blues Imperials

Steve Hess last July when he was inducted into the Kenosha Softball Hall of Fame. With him from left are his sisters, Shari and Lindy.

Steve Hess, right, sporting his Billy Idol look, and friend John Thomsen ham it up for the camera at a New Year’s Eve party in 1983 or ‘84.

Steve Hess and his wife, Amy.

Steve Hess at the ballpark.