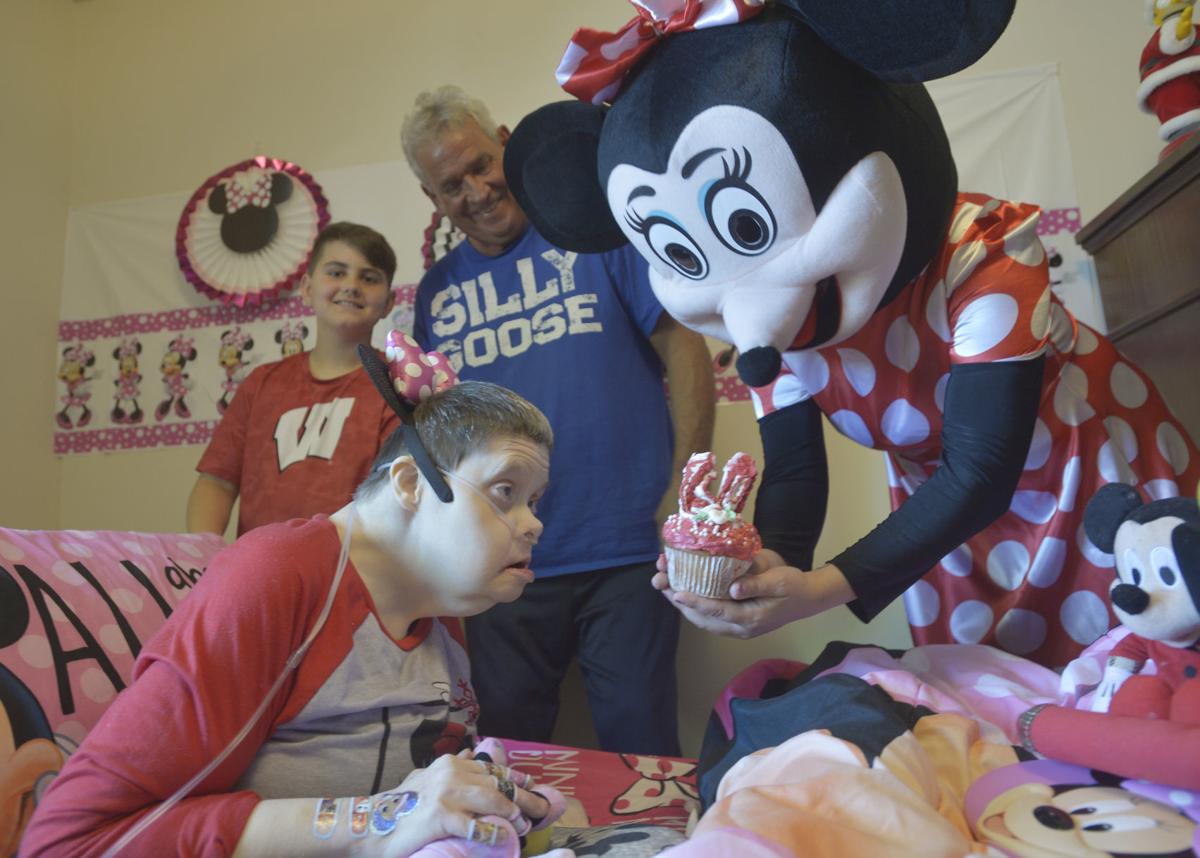 Diane Guzdek, front, gets is served a cupcake from her niece, Sarah, dressed as Mini Mouse, as her nephew, Carson Fredrick, 10, left, and brother, Andy, look on. 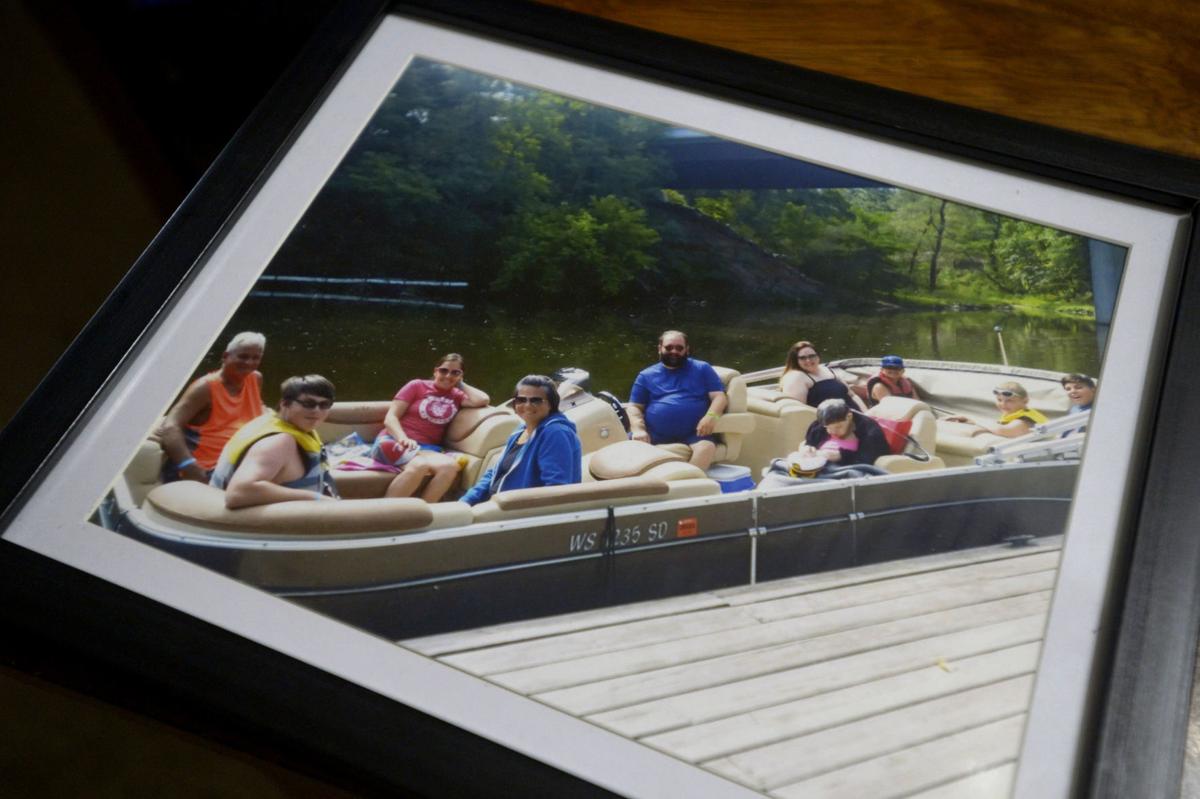 One of Diane Guzdek’s fondest memories is of a family vacation.

When she was born with Down syndrome in 1960, her parents were told she might not live past age 10. On July 28, she marks her 60th birthday.

Diane has also beaten the odds with illness, coming back from three bouts of life-threatening pneumonia in as many months.

In large part, Diane’s longevity and vitality are due to the love and support of her family.

“We’ve been caregiving Diane for as long as I remember,” said her niece, Sarah Guzdek, during a recent interview.

Down syndrome — a genetic disorder whereby a person has three copies of chromosome 21 instead of two, results in a wide spectrum of physical and mental challenges.

Today, babies born with Down syndrome have an average life expectancy of 60 years, but this has not always been the case, say experts.

According to the Global Down Syndrome Foundation, as recently as 1983, the average lifespan of a person with Down syndrome was 25 years.

When Diane was born, doctors told her parents her life expectancy was “about 10 years” and told them to place her “in an institution,” said Diane’s niece, Jenny Guzdek.

But her mother, Lillian, was not having it. “She was adamant about keeping Diane at home,” she said.

Diane was the fifth of six children born to Lillian and Frank Guzdek, Holocaust survivors who emigrated from Poland to the United States and arrived in Kenosha in 1950.

The family lived in a predominantly Polish neighborhood on 14th Avenue, and as a child, Diane was “completely accepted” by the other children in the neighborhood, said her nieces.

Although Diane wanted to go to school with her peers, there was no public education option for children with Down syndrome in Kenosha at that time.

When the Kenosha Achievement Center began offering services to special needs children in the mid-1960s, Diane attended programs there.

Diane graduated from KAC programs at age 21 in a ceremony complete with cap and gown.

For many years she worked at the KAC doing piecework. “She loved bringing home a check every week,” said Diane’s brother, Andrew Guzdek.

“It was mostly a social thing for her,” Jenny said.

In 2005, Diane decided she no longer wanted to work at the KAC and “retired herself,” Jenny said.

After Frank died in 1979, Lillian continued to care for Diane. They lived together in the house on 14th Avenue until 2000, when they moved to an apartment on Kenosha’s north side.

“Luckily, we were able to keep her in her home — we’re so glad we did this especially considering what’s happened during the pandemic,” Jenny said.

Andrew stepped up to provide care during the day, and Jenny shifted her hours at work to care for Diane at night.

Also on Diane’s emotional support team is Sarah and her sons, Carson and Fredrick, and nephew Joe who come by daily for visits.

The Kenosha News met Diane and her family at the apartment where she lives with Andrew and Jenny.

While Diane enjoyed a dish of ice cream, Jenny and Sarah described life with their aunt.

Although verbally limited, Diane has ways of expressing her needs and emotions, they said.

“She sometimes talks very loud and clear — when she’s scared, she’ll talk in full sentences,” Jenny said. “Other things we just have to figure out.”

Diane has several family nicknames including “Butch” and “’Nusha,” a shortening of her name in Polish, which is Danusha, said Jenny.

Although she is a woman of few words, Diane makes her interests — including Christmas, her birthday and “old school” cartoon characters like Mickey Mouse and Winnie the Pooh — known.

She has a wide collection of cartoon character stuffed animals, which she likes to match to her clothing of the day, Jenny said.

Music is one of Diane’s other favorite pastimes. “She likes nursery rhymes, ‘Jingle Bells’ and clapping to ‘If You’re Happy and You Know It Clap Your Hands,’” Jenny said.

Diane’s outings in the community have been few, but when her mother was alive, she accompanied her to church, shopping and church festivals.

Last year, Diane went on her first vacation when she accompanied family to the Wisconsin Dells. She enjoyed a ride on a pontoon boat and “handled the trip better than anyone else,” noted Jenny.

Diane’s health has been primarily good, but took a downward turn after Lillian’s death in April 2019. From May to July, she had pneumonia three times.

In August of last year, Diane began receiving at-home hospice care from Heartland Hospice. While her family still provides her primary care, hospice staff come in weekly to check on her.

In December, Heartland Hospice granted Diane a “wish” from its Dreams Foundation. The wish consisted of a Christmas party in her honor held at a local restaurant complete with Santa and guests costumed as Mickey and Minnie Mouse and Winnie the Pooh.

Diane’s family says that medical providers have remarked they are impressed that Diane is not living in a group home, and that she appears to have been cared for very well by her family.

“Diane is proof that (those with Down syndrome) can live a really long life,” she said.

Jenny says she feels her aunt’s story is unique because many people think of children with Down syndrome, but not much is heard about those who have made it into adulthood.

On June 4, the family shared Diane’s story on a Facebook page called Positive About Down Syndrome.

“We wanted to show how our grandma (Lillian) kept her at home and didn’t put her in an institution,” added Sarah.

Diane’s family firmly believes that caring for her is neither a chore nor an obligation.

“We’re lucky to have her in our lives,” Jenny said. “She’s the star of the show.”

As soon the Safer at Home order was issued in mid-March, one of Michael McTernan’s thoughts was “How will local farmers move their goods durin…

RACINE — A longtime Downtown Racine business was denied municipal COVID relief, and Mayor Cory Mason has confirmed participation in a Madison Safer at Home protest led to the denial of the grant.

PLEASANT PRAIRIE — For the first time, the vision of the Village Green Center is starting to come into focus.

A Twin Lakes woman has been arrested and charged with five felony counts of theft and money laundering.

Hours before a murder, a death threat captured on video

Hours before Keshawn Jenkins was killed on Sept. 15, 2019, his mother and sister got into a dispute with a group of people in a parking lot ou…

Diane Guzdek, front, gets is served a cupcake from her niece, Sarah, dressed as Mini Mouse, as her nephew, Carson Fredrick, 10, left, and brother, Andy, look on.

One of Diane Guzdek’s fondest memories is of a family vacation.