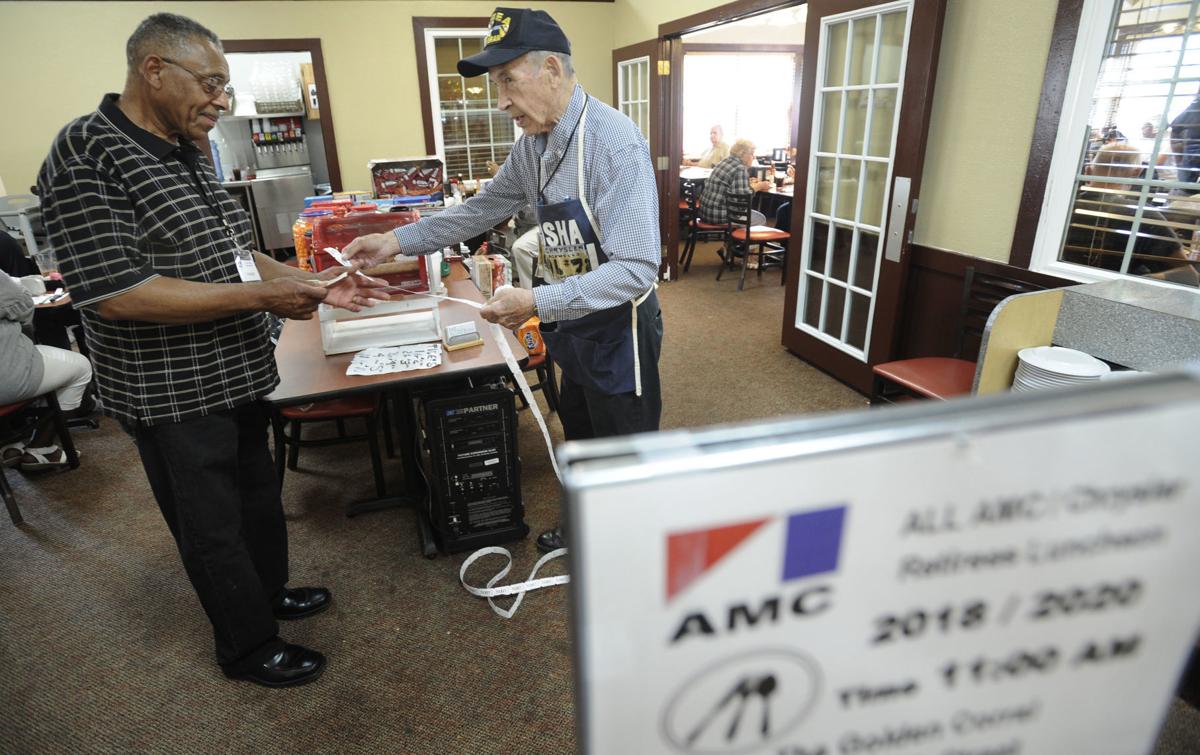 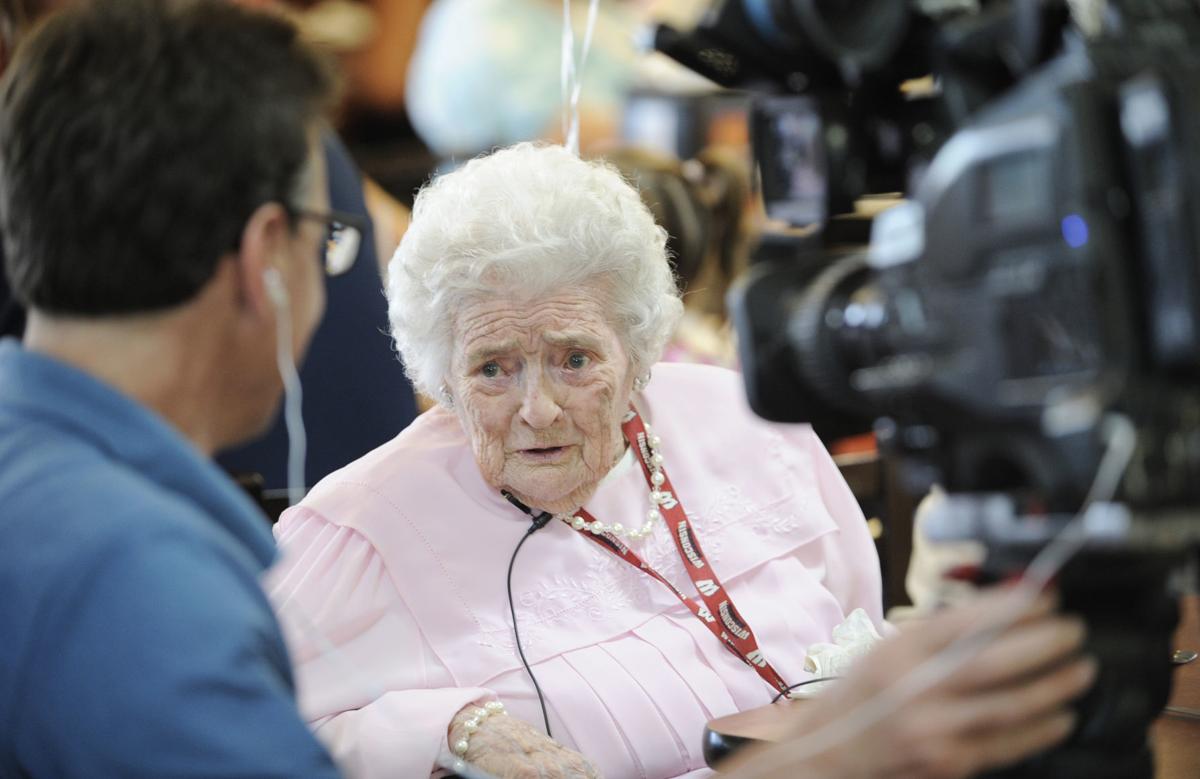 Martha Germinaro is interviewed by a television reporter during Wednesday’s AMC/Chrysler retiree luncheon. 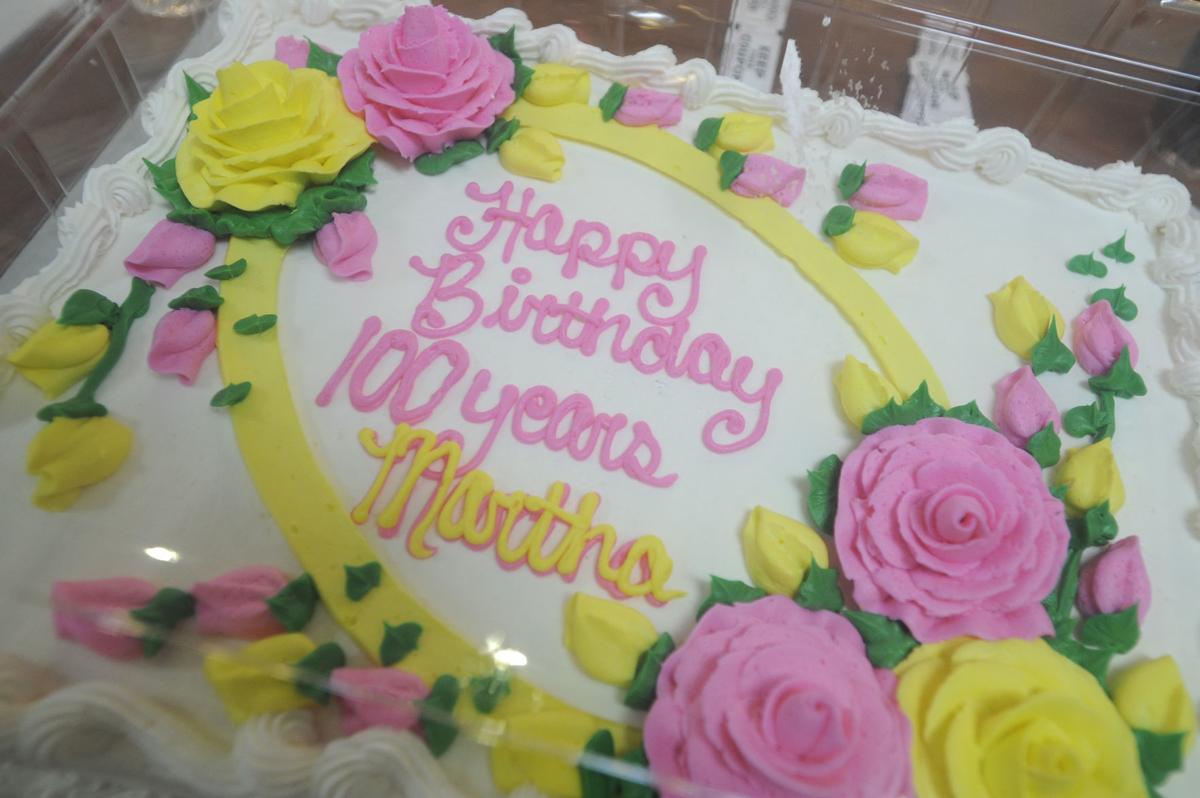 Martha Germinara celebrated her 100th birthday during the AMC/Chrysler Retiree Luncheon at the Golden Corral on Wednesday, Aug, 1, 2018.

For 16 years, retired employees of American Motors Corp. and Chrysler Corp. have been gathering at the Golden Corral to reminisce about automaking, work that has bound them for a lifetime.

On Wednesday, former United Auto Workers and other employees joined supervisors to share stories of the Kenosha auto assembly lines, as well as well-wishes for one of their own.

Martha Germinaro, who worked for 25 years for AMC, turns 100 years old today. Retired since 1979, the other retirees didn’t forget. They just helped her celebrate a day early.

It was luncheon organizer Jimmie Blackwell’s little surprise, coordinated along with Germinaro’s nieces, Rita Gross, who also worked at Chrysler for 28 years, and Carmela Parker, who is employed at Harvey Elementary.

“Martha, I just hope I can make it to 100 myself, sweetheart,” Blackwell told her.

As members of the group encircled her singing “Happy Birthday,” tears streamed down her face.

Working at the plant

Germinaro recalled working at the AMC plant where she toiled on the line and on the bench.

“It was rough. It was rough because I’m only 4 foot, 8 inches. There were days when I’d come home and I’d go right into my house and go right into my bedroom and go to sleep,” said Germinaro. “I remember one time I almost fell into the bin, because they were so deep. But you did what you had to do.”

She remembers her career at the automaking facility fondly.

“Being at American Motors was a good job because you had the union behind you,” she said. “It was powerful. I was sorry to see it leave.”

Her best memories of her days at American Motors are of the friends she made there, she said. She and five other women bonded and became friends for life.

“When we did anything we went out to eat together, we did everything together. ... Well, they’re all gone now,” she said.

Germinaro’s late husband, Michael, also worked at American Motors as a welder. The couple met well before that when they were still in grade school and would see each other at Washington Park, within walking distance of their childhood homes.

No secret to long life

Germinaro, who resides at Brookside Care Center, chuckles when people ask her what her secret is to longevity.

“Well, I don’t have one. I have no idea. But I always tell them it’s the Scottish blood in me,” said Germinaro, whose maiden name is Monroe.

Blackwell said he knew Martha’s husband from when they worked at the plant. While he worked there, he was already known to his co-workers as the “go-to guy” to plan for special occasions, whether to celebrate the holidays or birthdays.

“We’d do some sort of a party inside the plant,” he said. “I enjoy this. This is what it’s about. I really enjoy making people happy.”

Blackwell said he organizes the luncheons to give the retirees a place to gather.

“It’s for them and to keep them together, you know?” he said.

Jesse Andrews, who worked at the plant for 33 years, including 28 as a supervisor, said he enjoys coming to the luncheons for that very reason. As a retiree, the luncheons are a time to remember what was good about AMC and Chrysler.

“It was a good place to work. It was a good living for all of us that worked there. We all had a lot to be thankful for,” Andrews said. “I learned a lot there from the people I worked with.”

End of the Line Series

The Kenosha News did an extensive End of the Line Series on the closing of the Chrysler plant, which occurred 30 years ago. Here is a look bac…

Martha Germinaro is interviewed by a television reporter during Wednesday’s AMC/Chrysler retiree luncheon.

Martha Germinara celebrated her 100th birthday during the AMC/Chrysler Retiree Luncheon at the Golden Corral on Wednesday, Aug, 1, 2018.