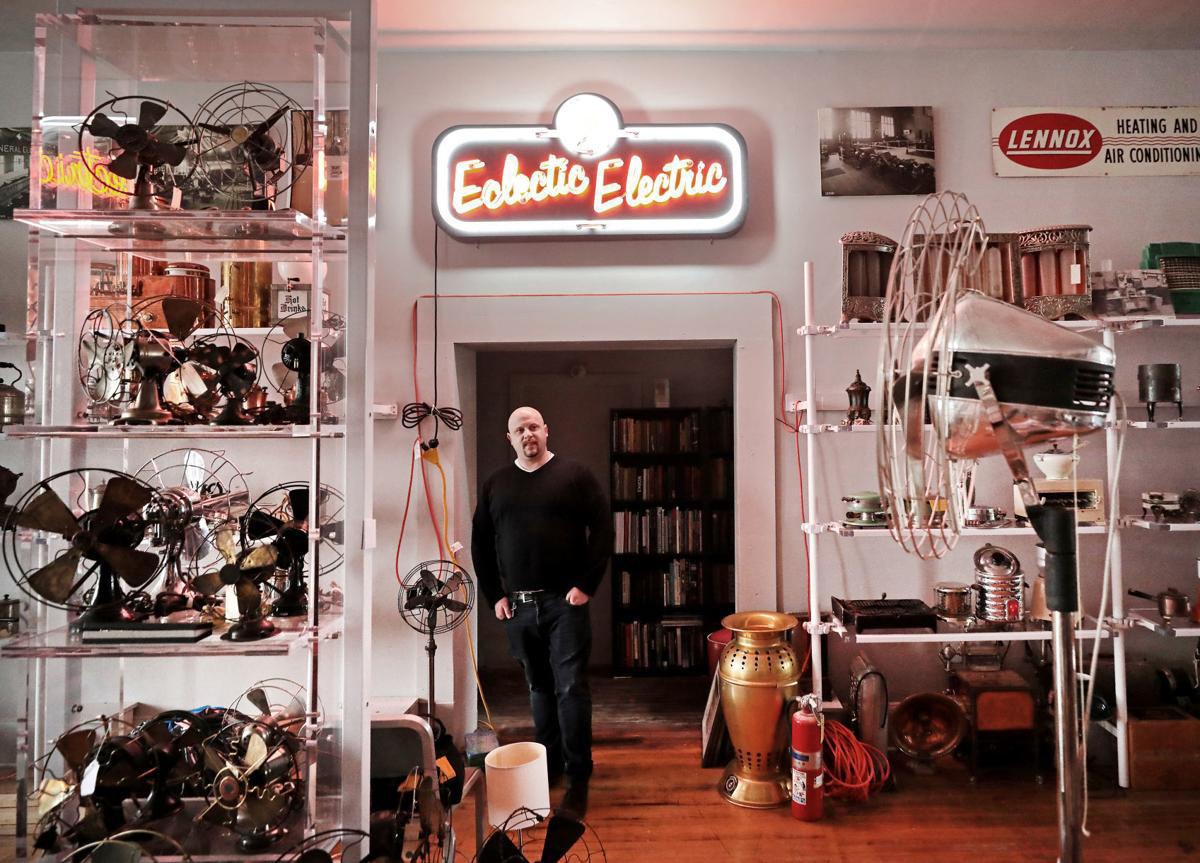 Stefan Osdene, a collector of vintage electrical appliances and fans, has his own second-floor museum space above his gold and antiques business in Cambridge. 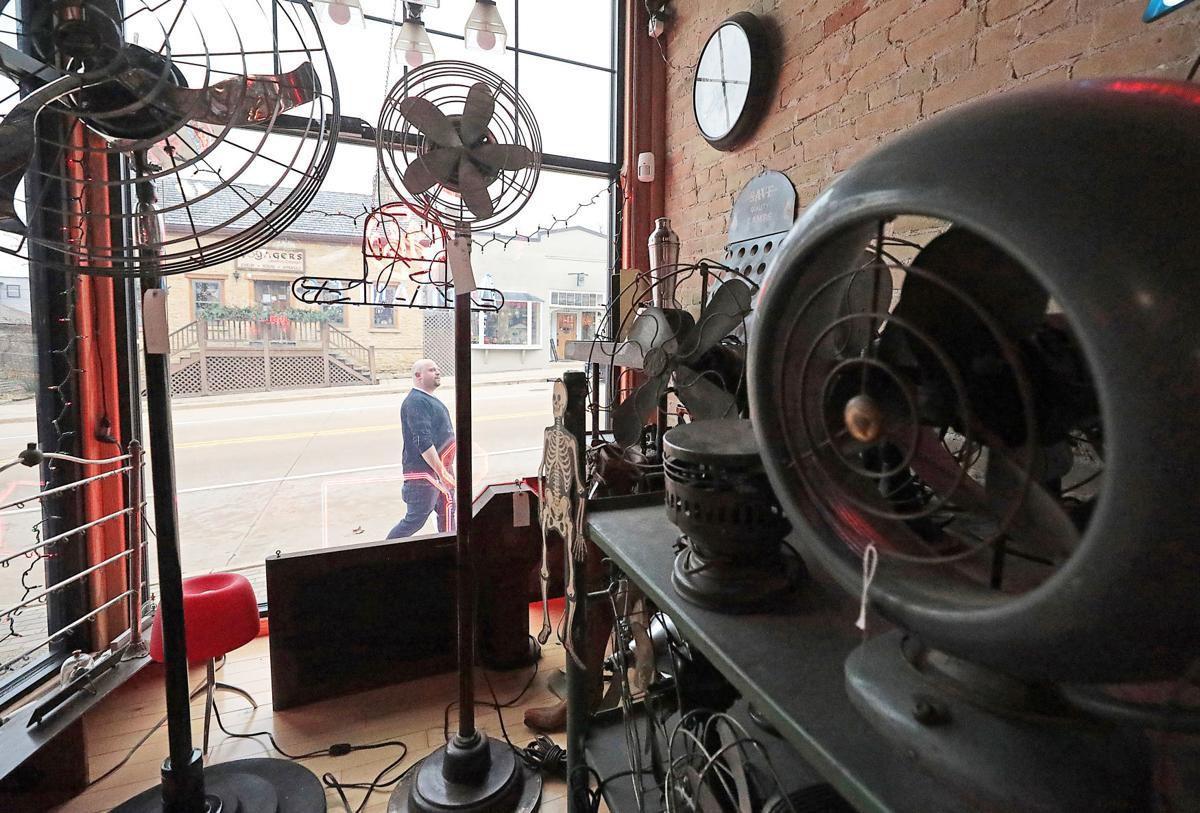 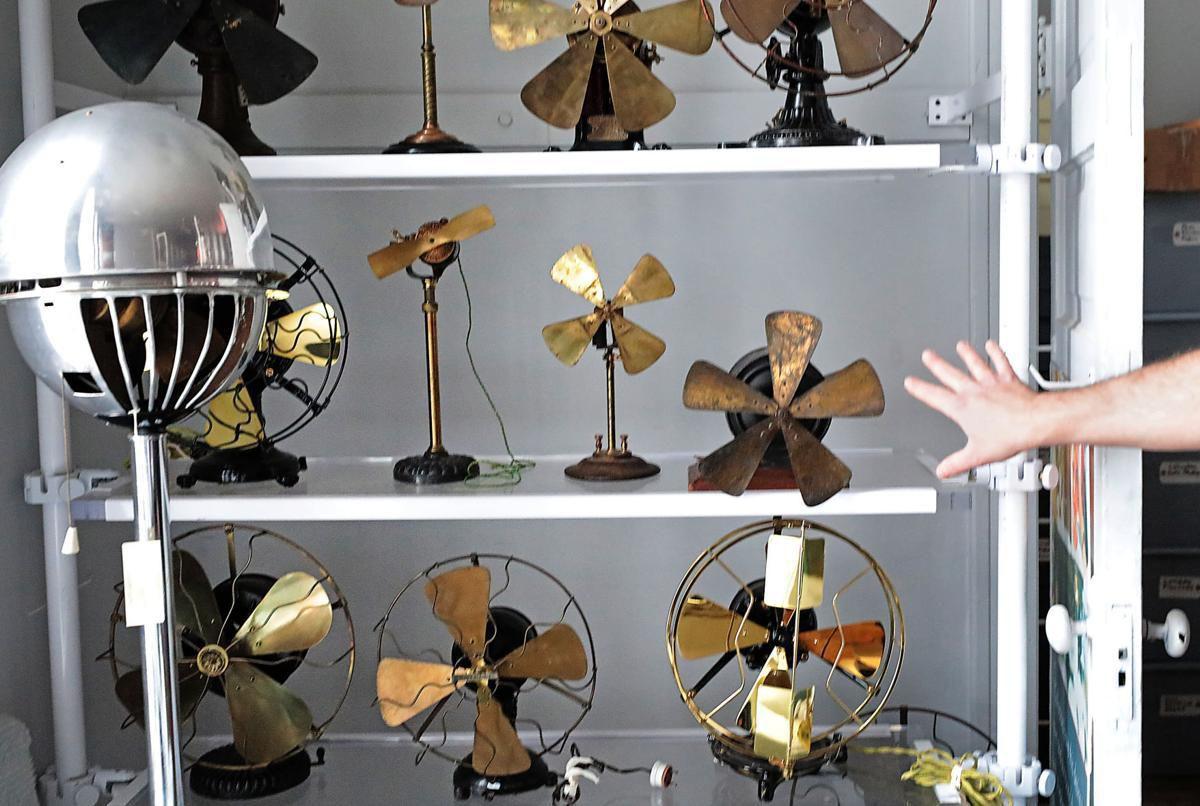 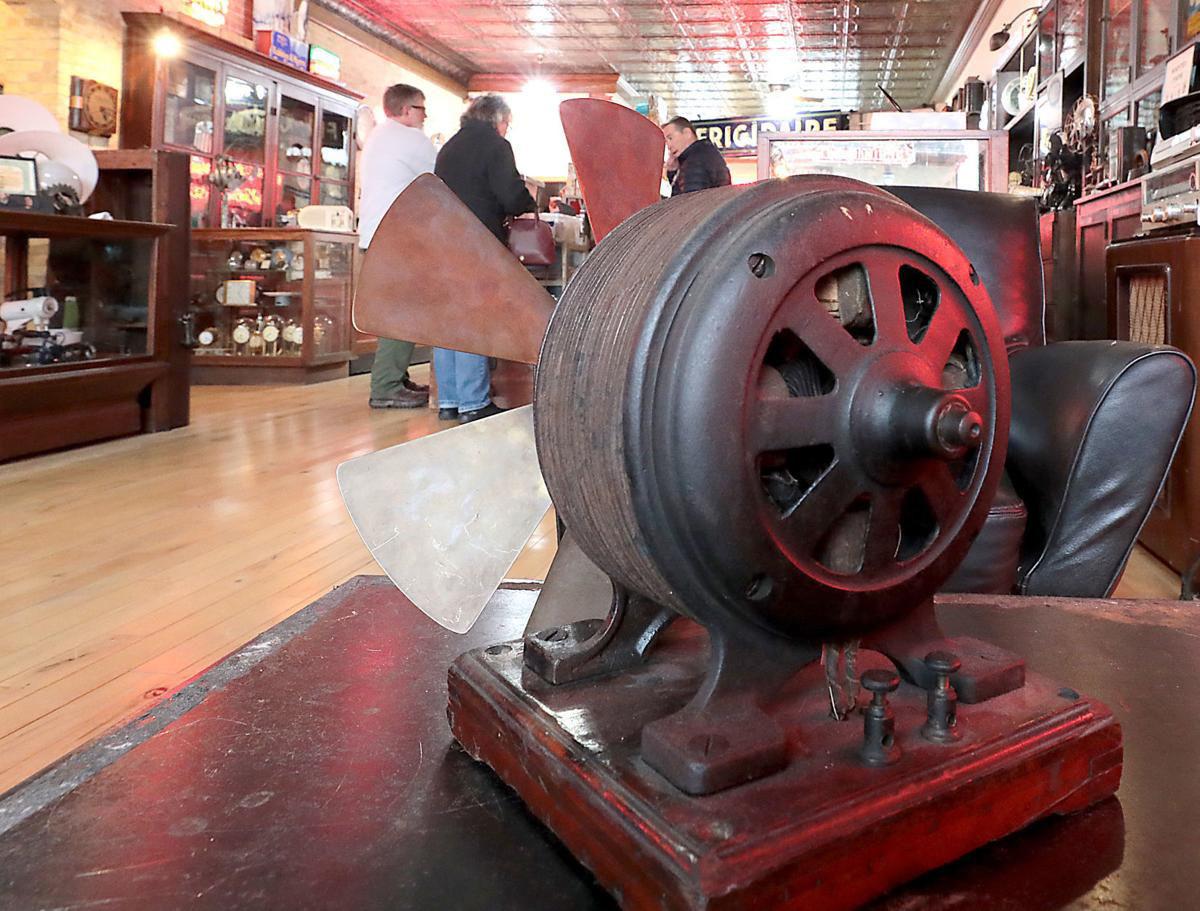 An 1889 induction motor made by George Westinghouse was designed by Nikola Tesla, the Serbian-American inventor who helped develop the alternating current system used by the modern electrical grid. Stefan Osdene considers the motor, one of only a handful in existence, the cornerstone of his collection. 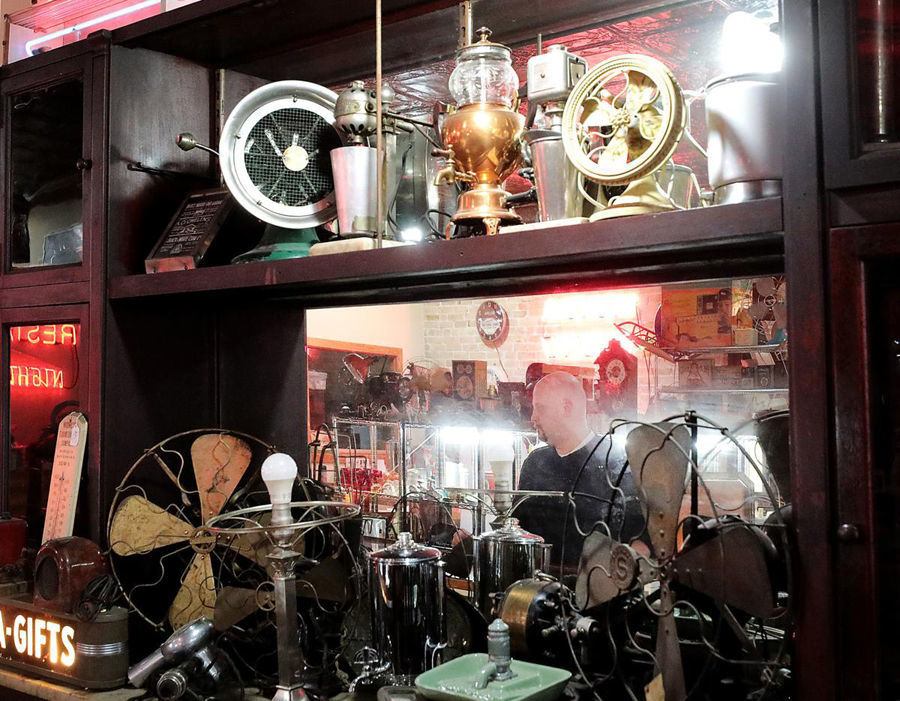 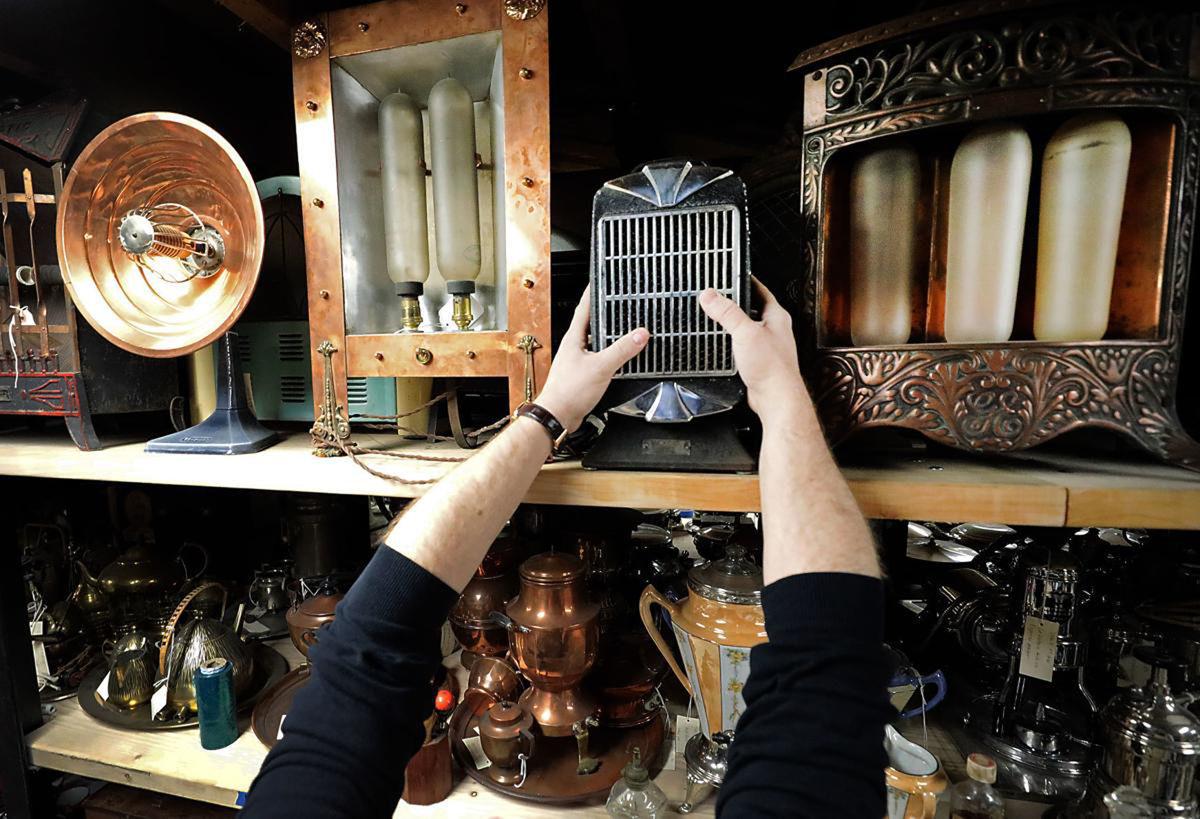 Stefan Osdene pulls and antique space heater from a storage room in the basement of Cambridge Gold and Antique, where he also houses his collection of early electrical appliances.

CAMBRIDGE — For Stefan Osdene, an electric fan is more than a household appliance.

Sure, it can move air and make a person feel a bit more comfortable on a hot day. But it is also a thing of beauty, a marvel of engineering, and a window into history.

Osdene should know. Over the past 30 years, he has owned thousands of fans. His most prized possession is a 140-year-old fan motor. Some folks might even call him a fanatic.

An art historian who makes a living selling antique watches and jewelry, Osdene is also the curator of a unique museum of antique electrical appliances.

Still a work in progress, the private gallery — open by appointment only — is housed above his shop, Cambridge Gold and Antiques, where vintage appliances, “high voltage” signs and a pair of Art Deco industrial fans hint at what is upstairs in the shop, located about halfway between Whitewater and Madison.

Shelves are lined with primitive blenders and toasters from days when safety was an afterthought. There are novelty cigarette lighters and heavy-duty appliances, such as a 1904 trolling motor made in Menomonie and the Washkosh washer from Oshkosh.

Started with the fan

For Osdene, the appliances help tell the story of industrialized society, a story that began with the electric fan.

“They were one of the first appliances other than electrical lights used in homes,” he said. “Fans were the thing that people adopted first.”

The earliest electric fans were battery-powered, but plug-in fans began to proliferate with the advent of electric generating stations in the 1880s. As current was brought into homes, inventors and manufacturers developed an array of electrical appliances to automate everyday tasks and make life a little more comfortable.

After all, electric utilities were among the first to sell household appliances as a way to boost demand for this new service. In 1929, electric power companies accounted for 35% of all appliances — more than any type of retail outlet, according to a contemporary paper in the Journal of Land & Public Utility Economics.

Osdene is fascinated by history and by the ingenuity of these early contraptions.

“It’s really simple,” he said. “It’s just an electric motor with a blade.”

And yet, despite the elegance of their design and aesthetic beauty of brass blades, the oldest fans are increasingly rare. Osdene said often the blades were stripped off and the motors repurposed. Other fans were scrapped or just tossed in the trash.

“They weren’t treated as great artifacts,” he said. “Just pieces of industrial equipment.”

Osdene, 38, grew up in Richmond, Va., the son of a cancer researcher who spent 30 years as a top scientist for the Philip Morris Co.

He traces his fascination to a childhood viewing of “Willy Wonka and the Chocolate Factory.” He said he was terrified as Charlie and his grandfather floated dangerously close to the blades of a giant fan after drinking Wonka’s fizzy-lifting drink.

Later he visited the Edison and Ford winter estates in Florida, where he became intrigued by the ingenuity of electric motors, and his fear turned to obsession.

He bought his first fan — a Signal Electric — from a thrift store when he was 8.

By age 15, Osdene was a full-fledged collector, displaying about a dozen of his favorite pieces as part of a young collectors exhibit for the Smithsonian Institute’s 150th anniversary celebration. He boasted that he had more than 3,000 appliances occupying several rooms of the family home.

Osdene came to Wisconsin in 2006 after graduating from Cornell University to study art history at the University of Wiscosin-Madison. He eventually earned a doctorate with a dissertation on the history of neon signs, which he concedes was a detour from his interest in collecting.

Companies such as Hamilton Beach, Oster and Dremel all were started in Wisconsin.

“Racine produced more fractional horsepower motors and small motorized appliances than any other city in the United States,” Osdene said. “It began with vibrators and evolved into electrical mixers.”

After a stint teaching at UW-Oshkosh, Osdene decided to forgo a career in academia, which he said had forced him to become myopic, focused on minutiae with little relevance to most people.

“I’ve more or less gone the route of buying and selling,” he said. “I didn’t like teaching too much.”

More than a dealer

That is not to imply he is simply an antiques dealer.

Osdene’s mind is like “a catalog of data that is instantly at his disposal,” said Michael Partney, a fan collector from Minneapolis.

Osdene can identify a first-generation Emerson fan from 1934 by the color of its blades and shape of the guards. But he can just as easily veer into an esoteric discussion of the merits of alternating current and the early battles between Thomas Edison and George Westinghouse.

Osdene’s collection has attracted media attention over the years. He was featured in a Smithsonian magazine article when he was 15, which led to appearances on the “Antiques Roadshow” appraisal program and spawned feature stories in the local newspaper.

He was profiled by the Wisconsin Energy Cooperative News, which likened his collection to an appliance store operated by the state’s rural cooperative association in the 1940s.

The hosts of “American Pickers” visited Osdene in 2015, picking through a garage full of fans at his West Side home before discovering the real treasure — an 1870s electric pen, a battery-powered duplication machine made by Thomas Edison’s company.

Believed to be the first electric motor-driven appliance sold in the United States, the pen fetched $12,000, which Osdene used to help buy the cornerstone of his collection, an 1889 induction fan motor.

Manufactured by Westinghouse, the motor was designed by Nikola Tesla, the Serbian inventor considered the father of modern electricity. Tesla used magnetic forces to spin a shaft and transmit mechanical energy. He used the alternating current, which won out over Edison’s direct current to become the standard for electrical transmission.

Osdene explains it is the earliest known example of an alternating-current motor available to the general public and one of only a handful that still survive — including two in the Smithsonian.

“It’s really a key piece historically,” Osdene said. “It’s the most important piece I own.”

Despite landing his white whale, Osdene is not done collecting.

“I’ll do it till the day I die. I love it. It’s a constant thrill of chasing and pursuing stuff,” he said. “I enjoy the objects when I have them. I can never see myself getting over collecting. If it’s not fans, it’s going to be something else.”

Stefan Osdene, a collector of vintage electrical appliances and fans, has his own second-floor museum space above his gold and antiques business in Cambridge.

An 1889 induction motor made by George Westinghouse was designed by Nikola Tesla, the Serbian-American inventor who helped develop the alternating current system used by the modern electrical grid. Stefan Osdene considers the motor, one of only a handful in existence, the cornerstone of his collection.

Stefan Osdene pulls and antique space heater from a storage room in the basement of Cambridge Gold and Antique, where he also houses his collection of early electrical appliances.