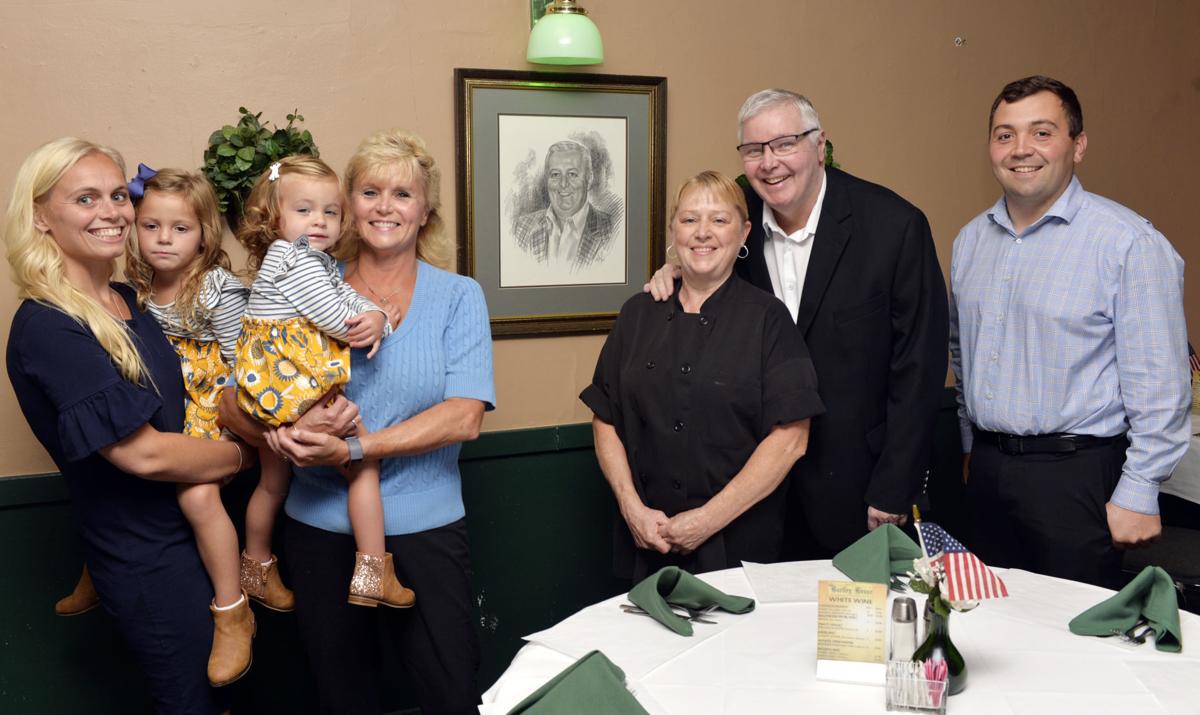 Mara Burke, left, with Piper, 4, Maureen Swartz with Sloane, 2, Missy and Bartley O’Mara Jr., and A.J. Swartz, right, stand with a portrait of Bartley O’Mara Sr., inside the Bartley House. The longtime Kenosha institution is closing its doors today. 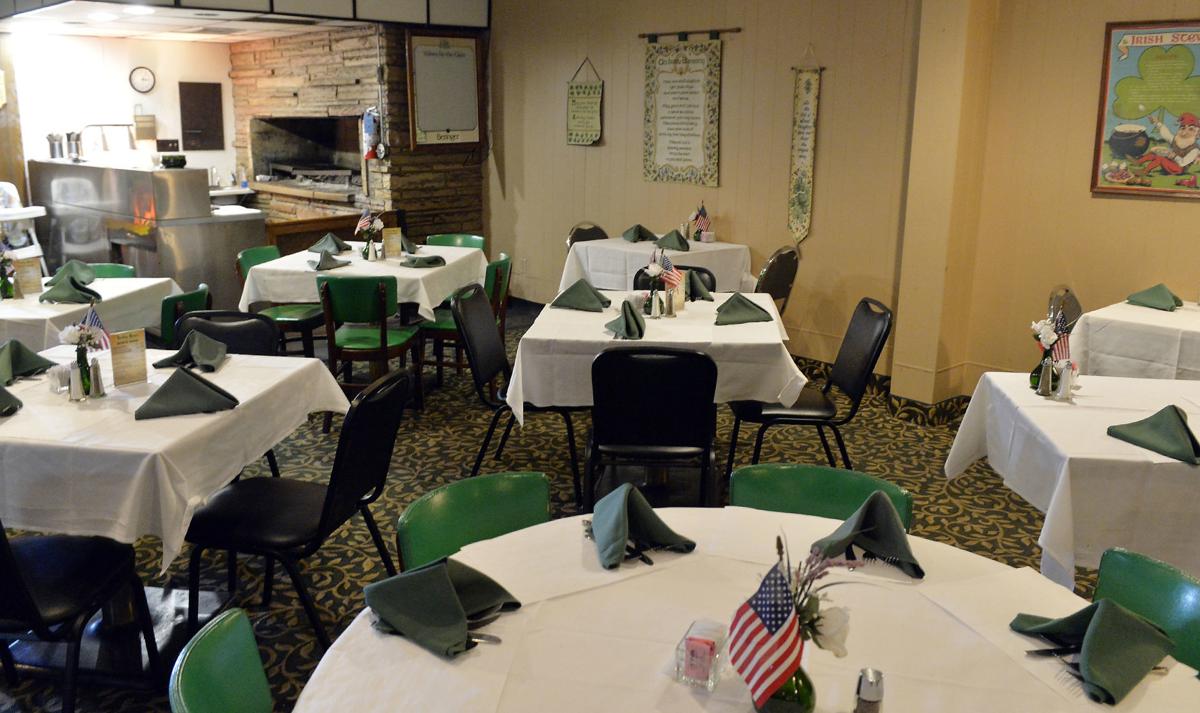 Interior of the Bartley House.

The days of tossing sugar cubes are nearing an end for Bartley O’Mara Jr.

Bartley House, a Kenosha landmark for the past 60 years, is set to close its doors on Sept. 20.

The family-owned operation was one of the few remaining supper clubs around and one of the most popular, long-standing restaurants in Kenosha history.

Co-owners O’Mara and his sister, Maureen Swartz, recently announced they are retiring and closing, not selling, the business.

“I could cry right now just thinking about it, but it’s happy tears,” said Swartz, the daughter of Bartley O’Mara Sr. “People have been coming and just hugging us with happiness. They’re happy for us but sad for them. They’re our second family. They’ve made our hearts feel so warm.”

The restaurant’s success stemmed from its longtime family employees and generational customer base, according to O’Mara.

“We’ve had some wonderful people working here through the years,” O’Mara said. “We’ve been very lucky. The ones we do have stay forever. It wasn’t a revolving door.”

As expected, the phone hasn’t stop ringing for reservations since the family informed its customers of the closure. The final night will certainly be one to remember. Walk-ins are still welcome on a first-come, first-served basis.

“We’re so booked,” Swartz said. “Some people are trying to get (tables) for eights and 10s. I can’t take them. If the tables turn, we’ll seat people. People are saying they’re going to put their cars in the parking lot just to make sure they get in.”

Swartz said she looks forward to spending weekends with her grandchildren, while O’Mara said he has plans for relaxation. Neither of them intend to leave Kenosha.

“We’re not going anywhere,” O’Mara said. “We’re in no hurry to do anything. We have no motive of getting out (of the business) other than it’s time. It’s just time.”

When word spread of the closing of Bartley House, many took to supper club's Facebook to express their love for the longtime Kenosha institution.

Jodie Brad Karmann: I can’t stop crying! We have celebrated our engagement, 21 wedding anniversary’s since then, countless birthdays, many nights out with friends, and the night before both of our children’s births there. This establishment and the O’Mara family have been a part of so many of our family’s milestones. We are going to miss celebrating life with you all! Best wishes on a well deserved retirement.

Chris Wade: Enjoy your retirement. Thank you for a lifetime if great food and memories.

Cindy Gehrke: Forty-seven years ago my husband proposed to me at the Bartley House. We were seated right by the grill near the front. Thank you for the great memories. now Enjoy your retirement.

Nancy DeLuca: This is sad. Our family has celebrated many anniversaries, birthdays, graduations, new years, at this place. Frank and I have been going there about 40 years. Always good service and food. In all those years I always ordered the same entree because I loved it so much (char-broiled shrimp). I’m just glad Frank DeLuca and I celebrated our 37th there on Wednesday. Happy retirement, Bart and Maureen. We will miss going there

Trish Tabarretti Jenkins: We have many memories in this place! We met wonderful people, ate delicious food! And most of all the owners and staff treated everyone like family! We will miss you all but (are) so happy for you to enjoy retirement

Cindy Gregory: Sad to hear this. We spent many evenings at the Bartley House when I was growing up. Every birthday or special occasion we were there. Loved their whipped cottage cheese. Bart Jr. was always so nice and would always address my dad by “Good evening Mr Gregory." I always liked that. He was always a classy guy. He would make a Manhattan for my dad and spin the cocktail napkin from a distance, and it would land perfectly in front of my dad. Oh the funny things you remember. They had fabulous steaks. You will be missed as you were an iconic place in Kenosha. Happy retirement!

Dorothy Dickbreder Palmer: Spent many wonderful times at Bartley House, including a special menu your dad fixed for my 30th birthday. I’m too old to count the number of nights we helped close, and wonderful, crazy St. Patrick’s Days! Some of my best memories of living in Kenosha in the late 70s. — Dorothy “Goodman” Palmer. Happy retirement!

Mary Hawkins: One of my favorite places! I have so many wonderful warm memories of the times spent there. The people ... the food ... the laughs! Nothing will ever compare. Thanks for the best memories, Bart. You will always remain one of my favorite people. So now where will I send the gingerbread cookies? Love you!

Ashley Richter: Oh no, I love this place! Please do us all a favor and send us your cottage cheese recipe LOL. I wanted to go there for my birthday Sept. 26. You guys had amazing food. Thank you for your contribution (to) making things great in Kenosha all these years.

Mara Burke, left, with Piper, 4, Maureen Swartz with Sloane, 2, Missy and Bartley O’Mara Jr., and A.J. Swartz, right, stand with a portrait of Bartley O’Mara Sr., inside the Bartley House. The longtime Kenosha institution is closing its doors today.

Interior of the Bartley House.