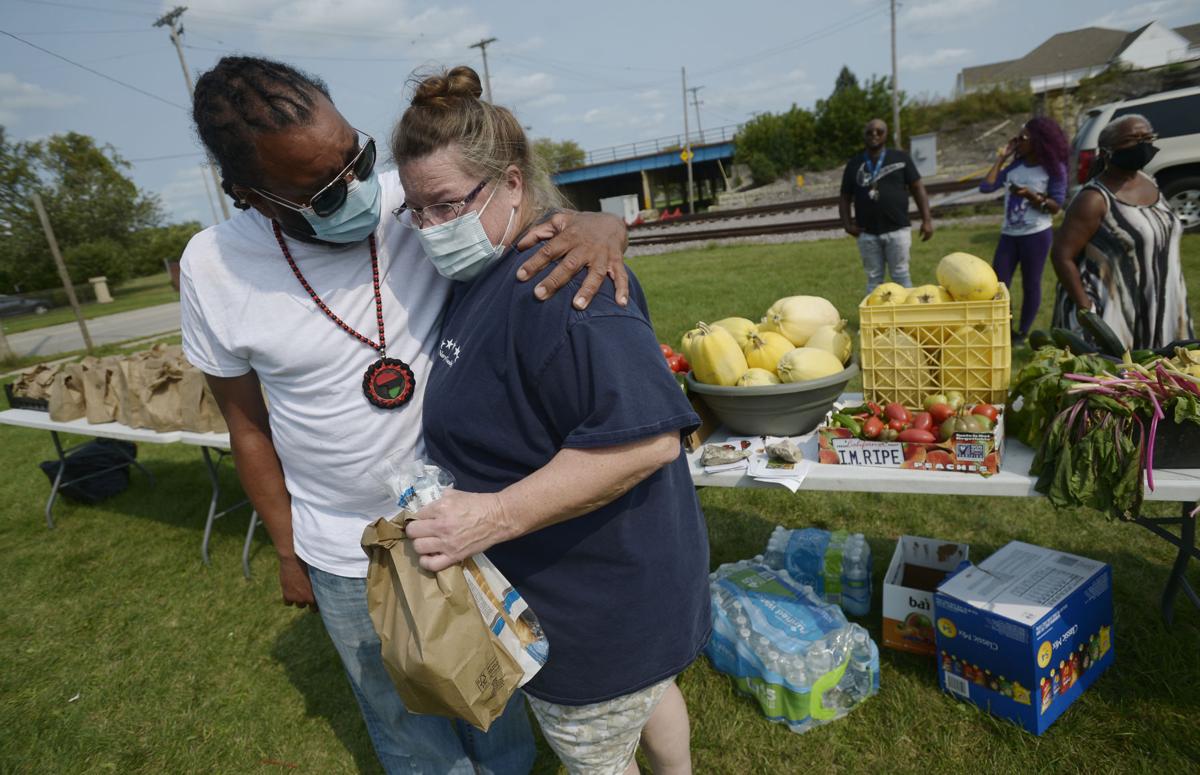 Justin Blake, left, gives Patricia Siragusa a hug as she cries during a community event hosted by Justice for Blake at 1345 52nd St. on Wednesday. 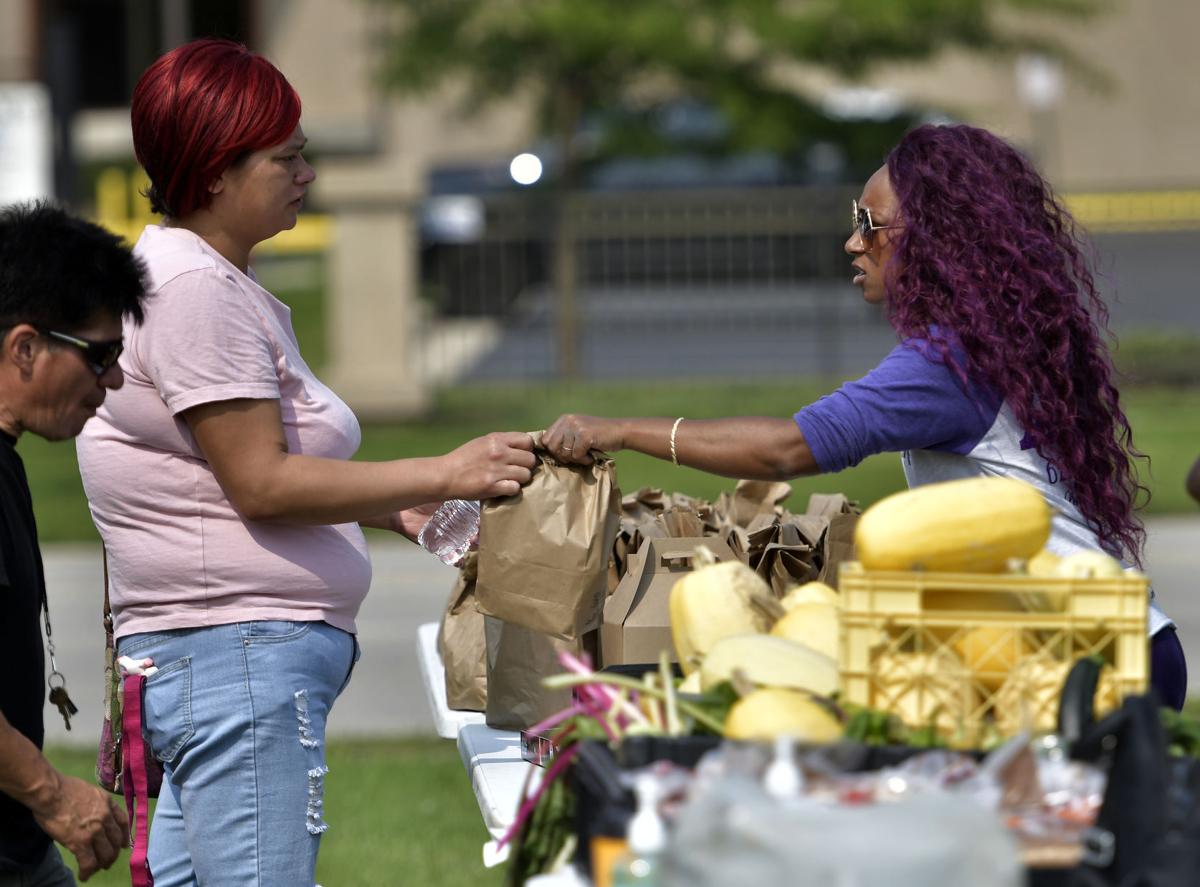 Volunteers hand out fresh vegetables and dinners during a community event hosted by Justice for Blake at 1345 52nd St. on Wednesday, Sept. 16, 2020. 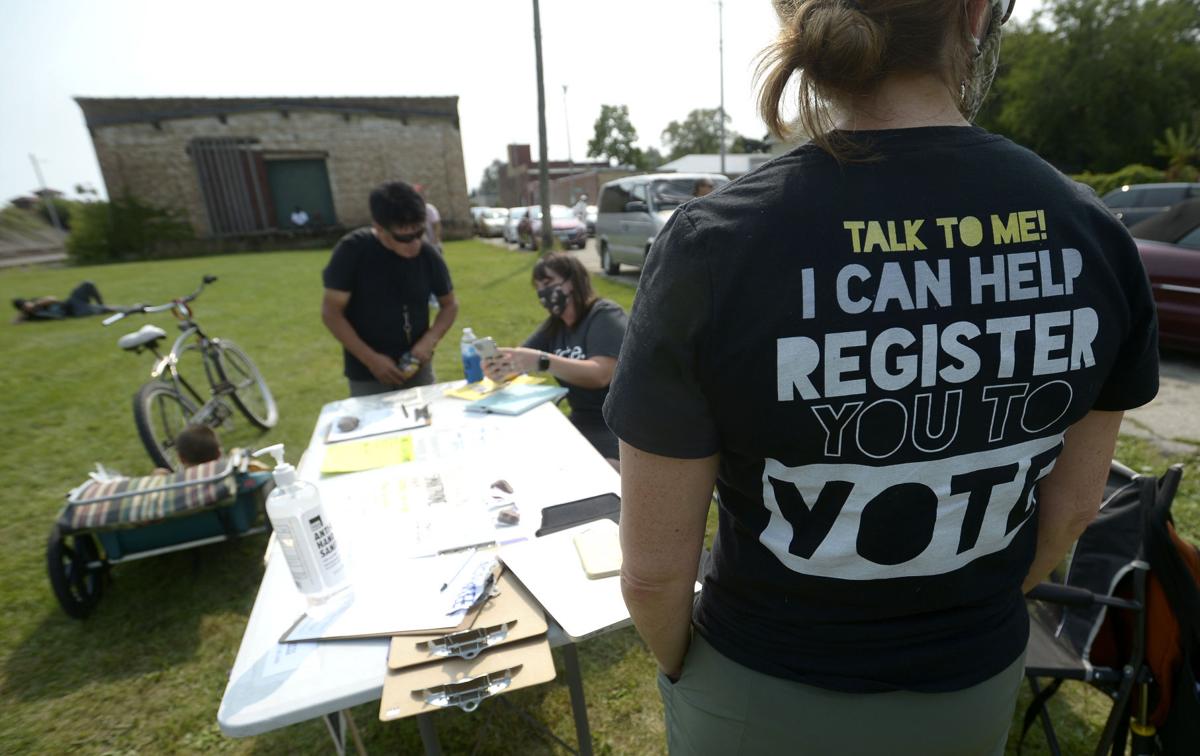 A nonpartisan voter registration table was setup during a community event hosted by Justice for Blake at 1345 52nd St. on Wednesday, Sept. 16, 2020. 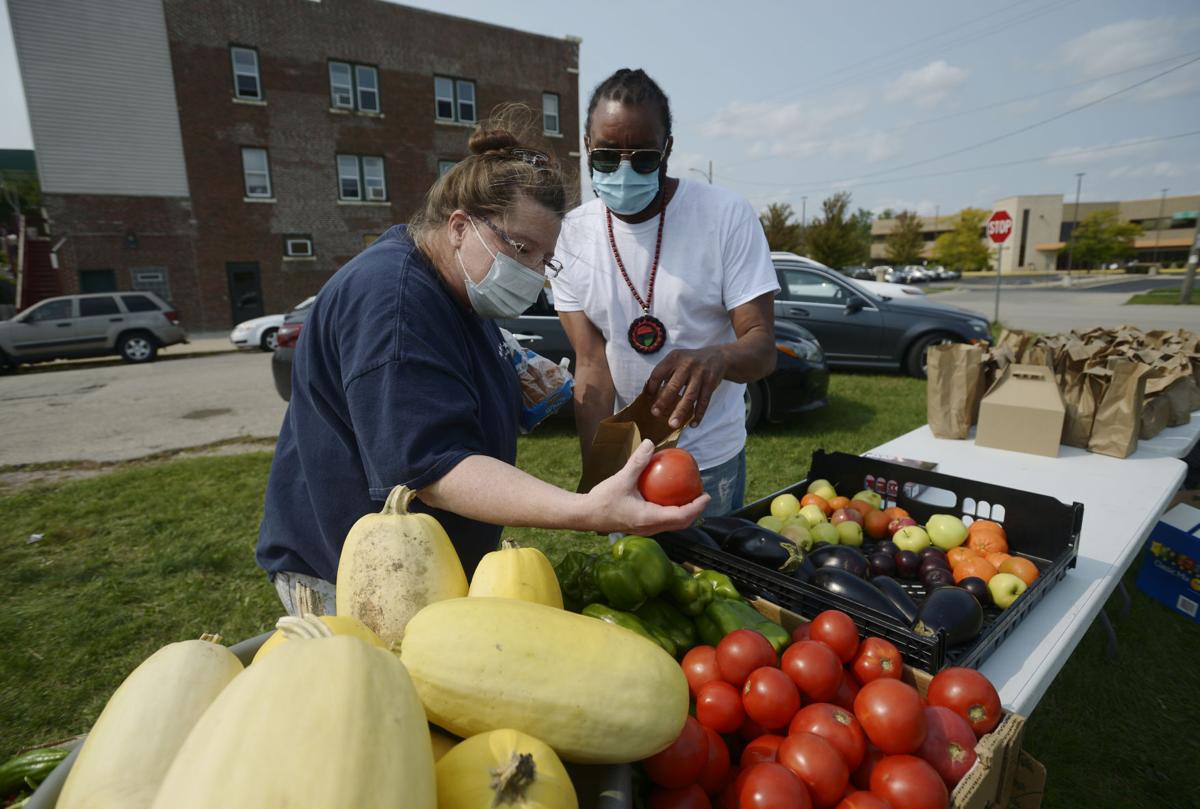 Patricia Siragusa picks out a tomato with Justin Blake after she made a donation during a community event hosted by Justice for Blake at 1345 52nd St. on Wednesday, Sept. 16, 2020.

A public event Wednesday held on behalf of Jacob Blake more than served its purpose, according to a family friend and event organizer.

And that was to continue spreading a positive message in the aftermath of several weeks of strife within the city.

Local leaders gathered near the Regimen Barber Collective, 1345 52nd St., throughout the day for a “Day of Healing,” in the name of Blake, the 29-year-old Kenosha man shot last month by Kenosha Police officer Rusten Sheskey.

The several-tiered event included meals for seniors and the homeless, a voter registration drive and family friendly activities that were set to take place later in the day when schools let out.

“It’s going awesome,” Blake family friend, Kenosha activist and one of the event organizers Tana McLean said shortly after 1 p.m. “Everything is going as we envisioned.

“We (wanted) to hold another peaceful event, just to show that Kenoshans are unified and that this town is absolutely standing together in a peaceful manner.”

Hitting a lot of different segments of the local population that need help was the idea behind the event, McLean said.

“These type of plans should have been happening,” she said. “Just like when we held the community event when Trump came, same premise. We need to be about peace. Feeding into their narrative is what they’re expecting.

McLean said that, instead of the group protesting the Kenosha visit earlier in the day by Evangelical activist and musician Sean Feucht at Civic Center Park, the decision was made to hold a separate event altogether.

“We did not want any run-ins,” she said. “In lieu of that, this was a space we could offer to people to be involved and give back to the community, while supporting the Blake family.”

Blake continues to recover from seven gunshots to his back that have left him partially paralyzed, McLean said.

“He’s healing,” she said. “It’s still a difficult time. We need an indictment, and they need justice. Until that happens, things aren’t clear about what’s going to happen next. But we’re going to keep driving out the message of love, peace, kindness and compassion.

“I know that’s what the Blake family stands for, and that’s what all of us stand for. We’re going to do whatever we can to keep a unifying message, one voice, one message.”

The investigation into the shooting continues by the Wisconsin Department of Justice and is expected to be completed soon. From there, that summary will be handed over to Kenosha District Attorney Michael Graveley to decide on whether Sheskey will face criminal charges.

There is just one acceptable end game for Blake and his family, McLean said.

“These are people’s lives and this can’t continue in this town. They need to be held accountable for their actions. I know you and I would be. I served in the Army, and if I shot somebody seven times, even in a war situation, I’m going to prison forever. There’s just no way around it. I don’t get paid leave, I don’t get all these fancy things.”

McLean added that it’s not just Blake the family is fighting for, but also every other victim of an officer-involved shooting.

The first session is Sunday from 2 to 4 p.m. at Journey Church, 10700 75th St. and will be live streamed. To register for that session, visit the city’s website at www.kenosha.org/visitors/news/694-community-listening-sessions-schedule.

Putting those sessions together is a good first step, McLean said, but it’s just that — the beginning of a long path toward a solution.

McLean added that it’s vital for the communities within the city most affected by the situation to be represented.

“The people that these laws are affecting and disenfranchising (need to be represented),” McLean said. “If the same faces are at the table, if the same faces that don’t live in these communities are there, then that’s a step in the wrong direction.”

Justin Blake, left, gives Patricia Siragusa a hug as she cries during a community event hosted by Justice for Blake at 1345 52nd St. on Wednesday.

Volunteers hand out fresh vegetables and dinners during a community event hosted by Justice for Blake at 1345 52nd St. on Wednesday, Sept. 16, 2020.

A nonpartisan voter registration table was setup during a community event hosted by Justice for Blake at 1345 52nd St. on Wednesday, Sept. 16, 2020.

Patricia Siragusa picks out a tomato with Justin Blake after she made a donation during a community event hosted by Justice for Blake at 1345 52nd St. on Wednesday, Sept. 16, 2020.