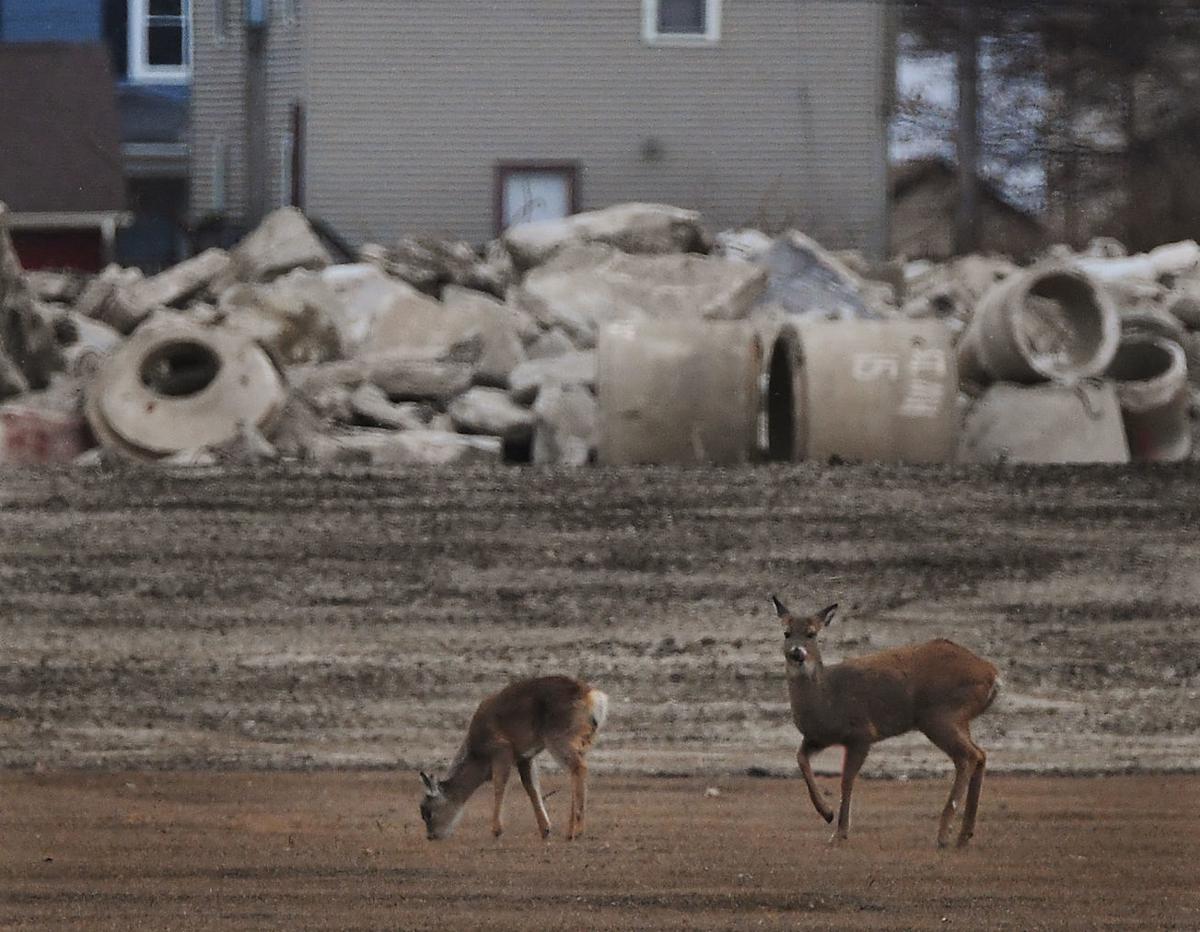 A doe and fawn graze Jan. 12 on the former Chrysler Engine Plant site, where they have been observed since September. The pair were relocated to a more rural area on Thursday. 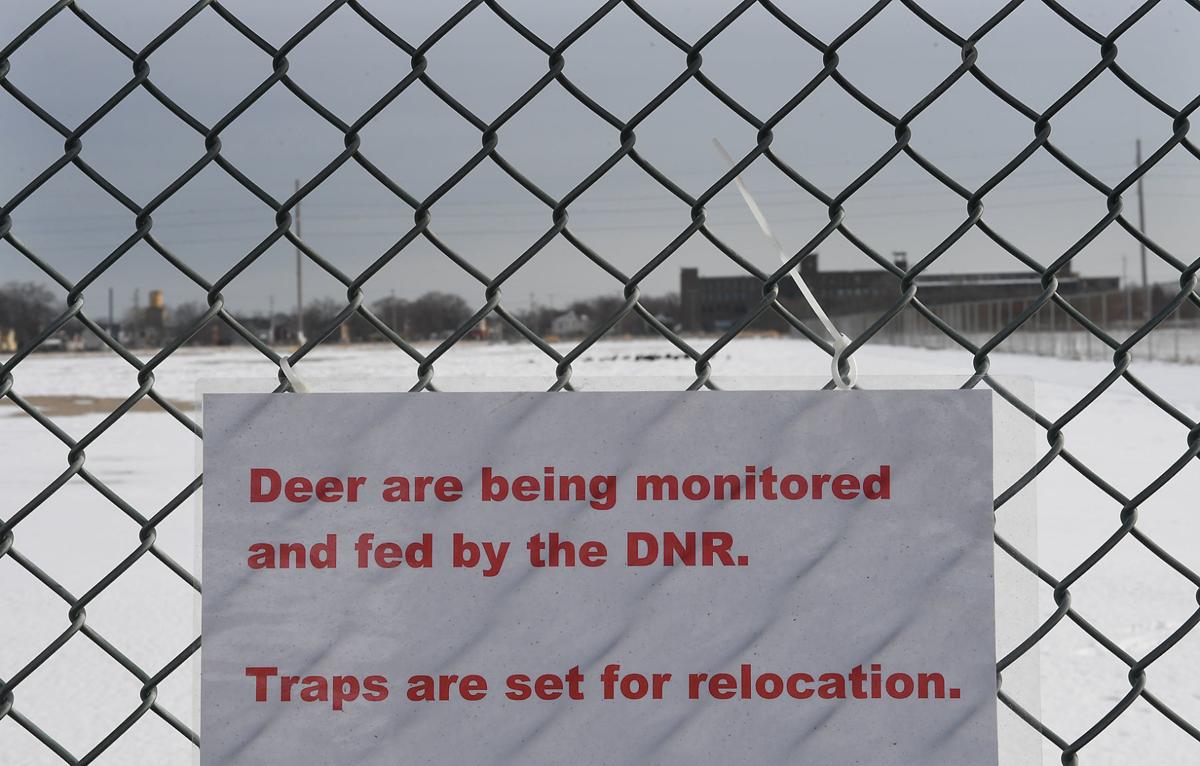 Signs posted by the Department of Natural Resources along the former Chrysler Kenosha Engine Plant announced the intent to capture and release a pair of deer on the property. The plan succeeded on Thursday. 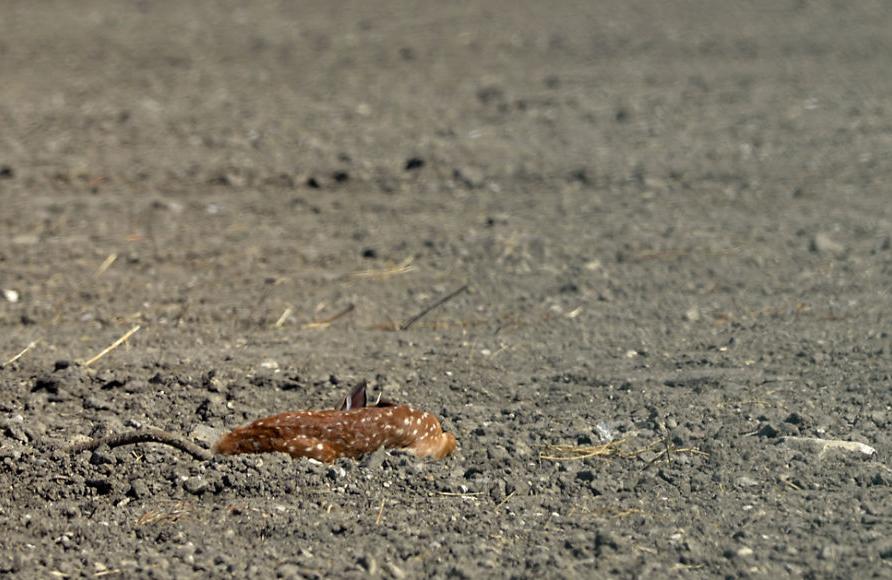 A fawn, barely visible in the foreground, had been living at the former Chrysler Engine Plant site for about six months before it was relocated this week.

For about six months, a doe and fawn have called the fenced site of the former Kenosha Engine Plant home. On Thursday, they were moved to a more hospitable environment.

The mother and daughter deer were trapped by the Wisconsin Department of Natural Resources Thursday and released later the same day in a more rural area.

Animal lovers of Kenosha have watched the pair with concern for months after they were spotted in the summer. It appeared the doe jumped the fence around the site — or walked through an open gate — before giving birth to her fawn. The pair have stayed there as remediation work has gone on at the contaminated former industrial park.

Marty Johnson, wildlife biologist with the Wisconsin Department of Natural Resources, said the department has received many calls about the deer, and said they have been monitoring them with the city and with the consultant working on the site.

“This was a pretty unique situation,” Johnson said. “Usually when we run into situations with deer in an urban area, they can somehow find their way out and scamper away.” He said they had hoped that would happen here, but as time went on, it was clear the deer had no plans to go anywhere. He said the fawn is now old enough that it could have jumped the fence, but did not seem inclined to do so.

“Our options were limited. If you pushed them out a gate, the potential for them to run out in traffic. There’s not a lot of good options there,” he said.

Darting the deer with tranquilizer was also not a good option because of the open nature of the site, Johnson said.

In late November, the DNR decided to put traps on the property. The traps, designed to trap deer unharmed, are typically used for research purposes, Johnson said. They were baited with food, but the deer didn’t bite. Until Thursday. “We were able to get both deer in the same trap.”

Johnson said the operation was unusual. He said he hasn’t done a similar relocation of urban deer in his 20 years working as a wildlife biologist in the area.

The DNR isn’t saying where the doe and fawn were released, only that it was in a more rural location. He said both appeared to be in good health.

“They ran off together,” he said. “They were happy to be free of us, and they got away from us as quickly as they could.”

Yvonne Wallace Blane of Fellow Mortals Wildlife Hospital said her organization has been getting frequent calls about the deer since summer. “We had four calls in one day last week,” she said.

Blane said deer handle cold and snow well, and that the doe and fawn were likely handling recent weather just fine. But she was pleased to learn that they had been relocated to a more appropriate habitat.

She had high praise for the efforts of the DNR, saying that wardens and wildlife staff go out of their way to help wildlife in the region, and have been partners in Fellow Mortals’ efforts to rehabilitate injured animals. “I think they go above and beyond way more than people realize, I think it’s nice for them to get that credit,” she said.

A doe and fawn graze Jan. 12 on the former Chrysler Engine Plant site, where they have been observed since September. The pair were relocated to a more rural area on Thursday.

Signs posted by the Department of Natural Resources along the former Chrysler Kenosha Engine Plant announced the intent to capture and release a pair of deer on the property. The plan succeeded on Thursday.

A fawn, barely visible in the foreground, had been living at the former Chrysler Engine Plant site for about six months before it was relocated this week.