A jackknifed semitruck causing a massive backup is shown here on the northbound side of the Interstate near Highway 158 in Kenosha County Tuesday morning amid a snowstorm. 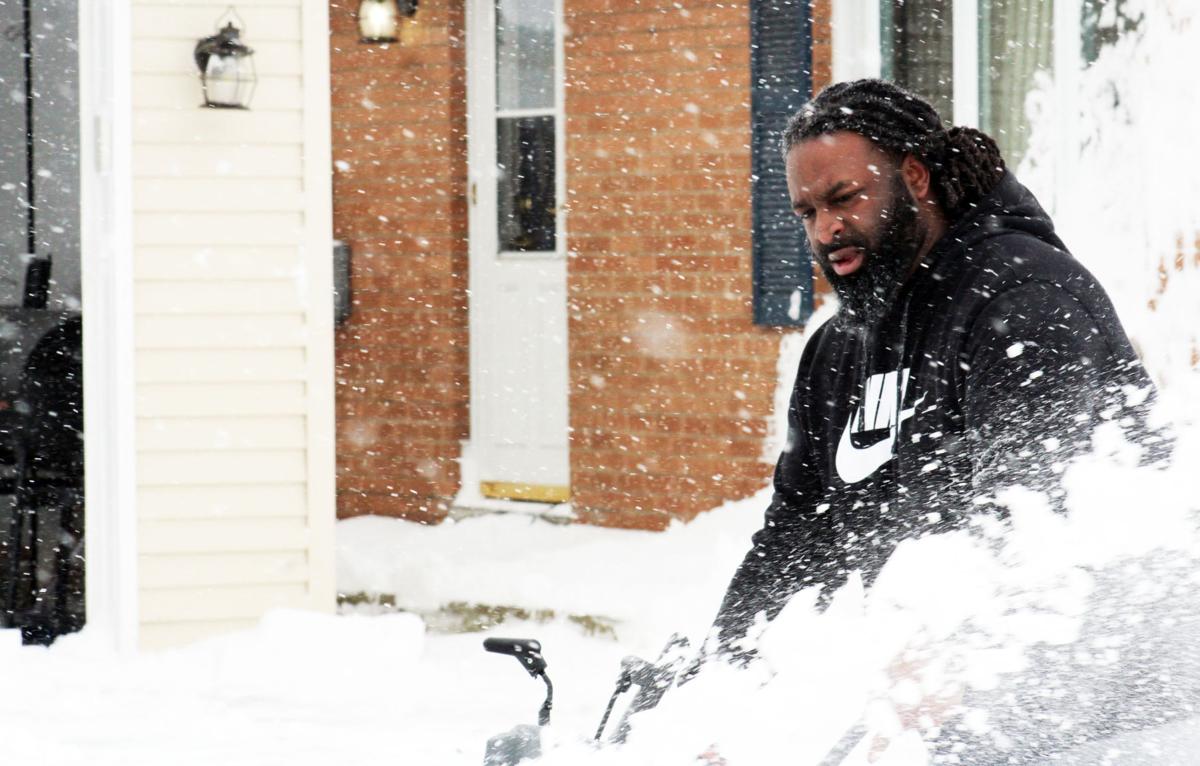 With specks of snow filling his beard, Cartrell Gamell plows his driveway near Echo Lane in Racine on Tuesday.

Several crashes were reported along Interstate 94 in southeastern Wisconsin amid the snowstorm that arrived Tuesday morning, although reports off of the I were more quiet as the area was blanketed with snow, with some more minor crashes being reported.

Numerous schools that still have in-person schooling across the county — including the Burlington Area School District, Siena Catholic Schools, Union Grove Elementary School, Burlington Catholic School and others — closed buildings Tuesday because of the winter storm.

A jackknifed semitrailer collided with another semi near Highway 158 in Kenosha County, just west of the Kenosha Regional Airport, on Tuesday morning. That crash led to a long backup with all lanes of westbound I-94 closed as of 10 a.m., but all lanes had reopened by noon.

Sgt. David Wright of the Kenosha County Sheriff’s Department said the Wisconsin State Patrol was handling the crash investigation. Pleasant Prairie and Kenosha Fire Department ambulances were called to the scene, but the KFD unit was released from the scene without transporting anyone at 9:09 a.m.

Traffic from that crash was being diverted as far south as Illinois.

There were a total of four jackknifed semi tractor-trailers on Interstate 94 in Kenosha County Tuesday morning, along with, four injury accidents and more than a dozen property-damage crashes.

Another Kenosha County crash was reported near Highway 50 after 6 a.m., but was cleared by 9 a.m.

Crashes causing lane closures were also reported on I-41 in Waukesha County and in Milwaukee County because of another jackknifed semi. Other Interstate crashes were reported in Jefferson County, Oak Creek and Fox Point.

A post from Racine County also said: “Racine County snow plow crews continue working to clear I-94 and county and state highways. Heavy snow and high winds, which are expected to continue all day, have caused very poor conditions on the roads. Please slow down, allow extra time to get to destinations, and give plows room to work.”

Snow ‘not done yet’

The powerful system was expected to dump at least 4 inches of snow across most of an area stretching from central Kansas northeast to Chicago and southern Michigan — with 10 to 15 inches between York, Nebraska, and Des Moines, Iowa — the Associated Press reported.

Several coronavirus testing sites in Nebraska and Iowa were closed Monday because of the snow. “This is historic snow,” Weather Service meteorologist Taylor Nicolaisen said, noting that the region hasn’t seen a foot or more in at least 15 years.

Mark Gehring, an NWS meteorologist in Sullivan, said there had been a lot of variability because of drifting snow, which makes it difficult to measure. He estimated areas in the county received between 3-6 inches total as of 1 p.m.

There may be more snow coming later in the week; a chance of snow is on the radar for Saturday and Sunday.

About 4 inches of snow fell in Kenosha County overnight according to the National Weather Service, with snow expected to continue throughout the day. Blowing and drifting snow could cause hazardous driving conditions.

In Racine County, few snow-related problems other than a couple cars in ditches were reported across the county.

In Burlington, Public Works Director Peter Riggs said his crews hit the streets starting at 1 a.m. Tuesday, focused first on major thoroughfares and then on residential streets. More than 12 hours later, crews were still working to stay ahead of the accumulating snow.

“It worked out really well today,” he said.

The Caledonia Fire Department had nothing to report when contacted by The Journal Times in the early afternoon. Secretary of the Fire Department Carla Buratti said there were no crashes, wires down, fires or anything else.

“We’ve been really quiet,” she said.

However, The Village of Caledonia Police Department said on its Facebook page Tuesday morning that there were several minor accidents, including cars and trucks in ditches. “The roads remain snow-covered and slippery as the storm continues,” the post said.

The South Shore Fire Department, which covers Mount Pleasant and Sturtevant, had a similar report as Caledonia Fire.

It Gets In Your Beard

Rachel Kubik, Scott Williams and Adam Rogan of The Journal Times, as well as reporting from other Lee Newspapers outlets, contributed to this story.

IN PHOTOS | First snow of the season in Racine County: Kids out to play, holiday lights aglow, shovels galore

We may not have had a white Christmas this year, but there's plenty of snow heading into New Year's Eve. See how locals played in, cleaned up …

A jackknifed semitruck causing a massive backup is shown here on the northbound side of the Interstate near Highway 158 in Kenosha County Tuesday morning amid a snowstorm.

With specks of snow filling his beard, Cartrell Gamell plows his driveway near Echo Lane in Racine on Tuesday.