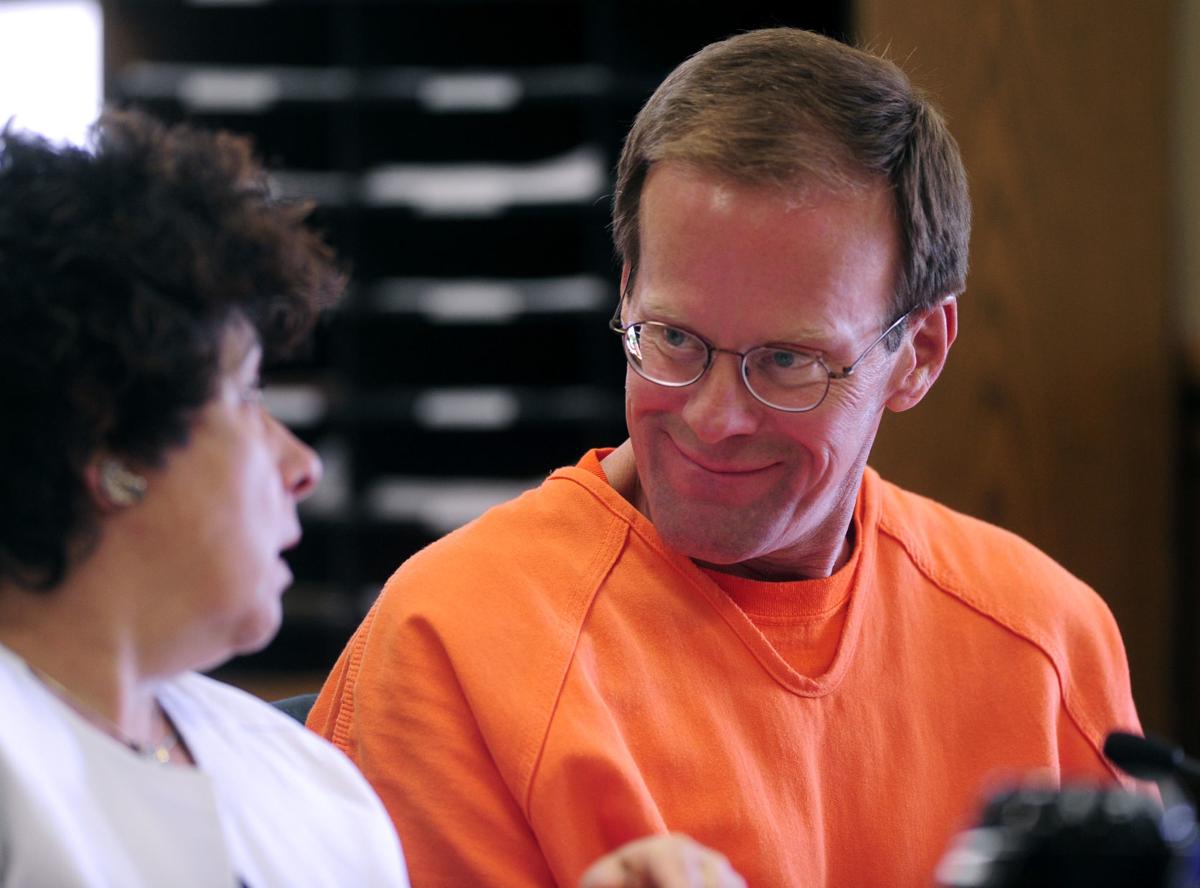 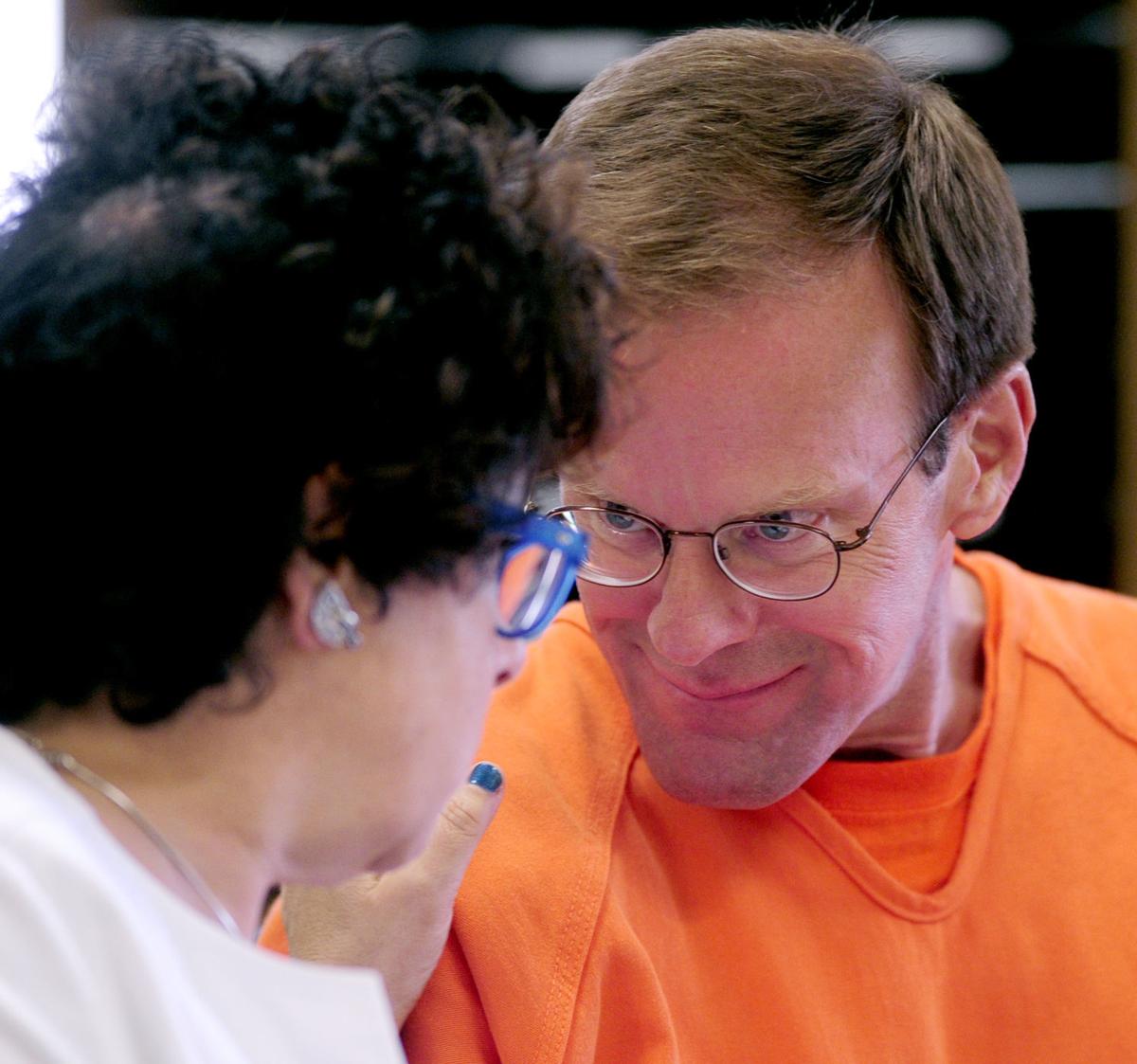 Mark Jensen speaks with his attorney Deborah Vishney during a motion hearing to decide whether Julie Jensen’s letter will be admitted at trial in July 2017.

Jensen was convicted in 2008 of killing his wife, Julie Jensen, in 1998, prosecutors arguing that he had poisoned her with antifreeze. The case has been subject to numerous appeals, with the most recent a state appellate court ruling in February that Jensen must receive a new trial and that key evidence from the original trial, including a letter his wife had left for police before her death, cannot be admitted.

‘Voice from the grave’ letter

Most of the legal arguments in the Jensen case have focused on the state’s use at his original trial of a “voice from the grave” letter Julie Jensen wrote and shared with a neighbor not long before her death. That letter, which she asked be turned over to police if she died, stated that she would not commit suicide and stated that, in the event of her death, police should investigate her husband.

“I pray that I am wrong and nothing happens, but I am suspicious of Mark’s suspicious behaviors and fear for my early demise,” the letter stated.

After a series of appeals Jensen’s conviction was overturned and returned to Kenosha County for a new trial. In those appeals, both state and federal courts had found that admission of the letter violated Jensen’s Constitutional right to confront his accuser.

But when the case returned to Kenosha for the second trial, Circuit Court Judge Chad Kerkman surprised the defense by ruling that the letter was not “testimonial” and would again be admitted. With that, saying there would be no substantial difference in the evidence if a trial was held, Kerkman reinstated Jensen’s conviction.

A state appellate court issued a ruling in February that Kerkman’s decision was an error, ordering that Jensen get a new trial and ordering that the letter and other statements Julie Jensen made about her suspicions about her husband could not be used as evidence.

“The Supreme Court made its ‘firm belief’ abundantly clear not just in a case with facts very similar to the facts in this case, but in this case itself with these same exact facts,” the appellate ruling states.

“With that, we must conclude the circuit court erred in entering a judgment of conviction without a new trial, a new trial which was envisioned by the federal district court when it returned this case to the circuit court with instructions to ‘release (Jensen) from custody unless, within 90 days of the date of this decision, the state initiates proceedings to retry him.’”

Jensen, 60, is in prison at Dodge Correctional Institution in Waupun. 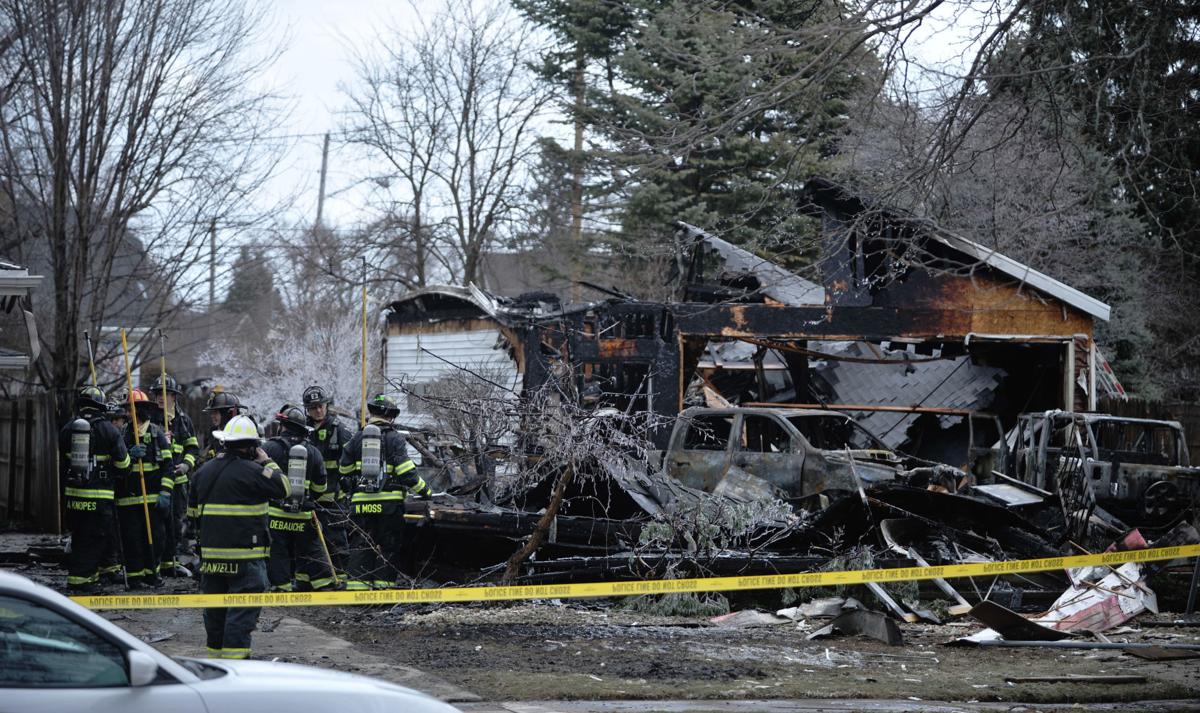 Nathaniel Presterl, 19, of Kenosha, was charged Tuesday with attempted arson and possession of a molotov cocktail after he allegedly attempted to set a relative’s home on fire.

A Kenosha man is being held on $10,000 after he allegedly stole money from a gas station and attempted to rob a grocery store while police were already seeking him on a warrant for an earlier robbery.

Diana Barrera of Waukegan, Ill., was fined $766.50 on a charge of driving while intoxicated. Her driver's license was revoked for six months, and she was ordered to undergo an alcohol assessment. 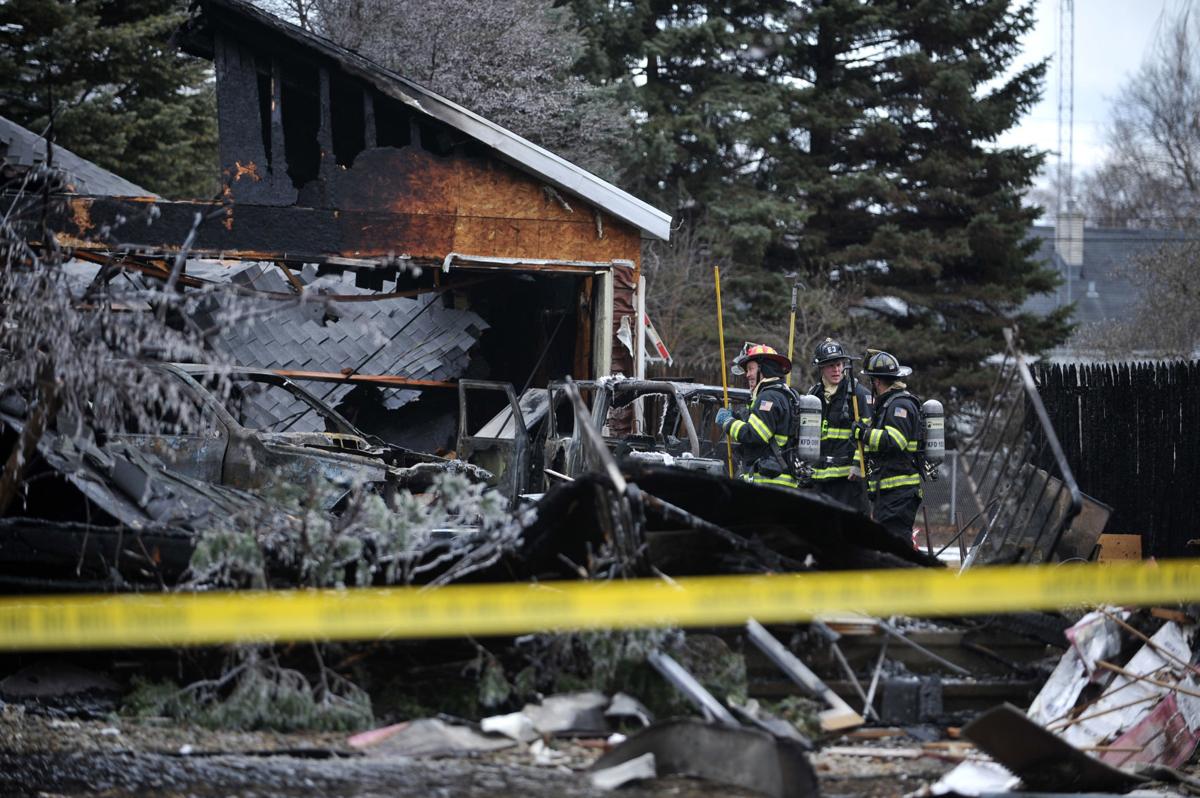 Cause of house explosion still under investigation

The cause of an explosion that destroyed a Kenosha home and left one person dead is still under investigation, but authorities believe that there was likely a natural gas leak inside the house.

Here are the crime stories published online and in the print product of the Kenosha News between March 17 and March 24, 2020.

Here are the crime stories published online and in the print product of the Kenosha News between March 24 and April 22, 2020.

These photos ran with news stories published online and in the print product of the Kenosha News between March 22 and March 26, 2020.

Here are the obituaries published online and in the print product of the Kenosha News between March 23 and March 26, 2020.

Each day the Kenosha News is honoring local high school seniors. Take a moment to learn about each of our "Today's Teens" in this gallery.

Mark Jensen speaks with his attorney Deborah Vishney during a motion hearing to decide whether Julie Jensen’s letter will be admitted at trial in July 2017. 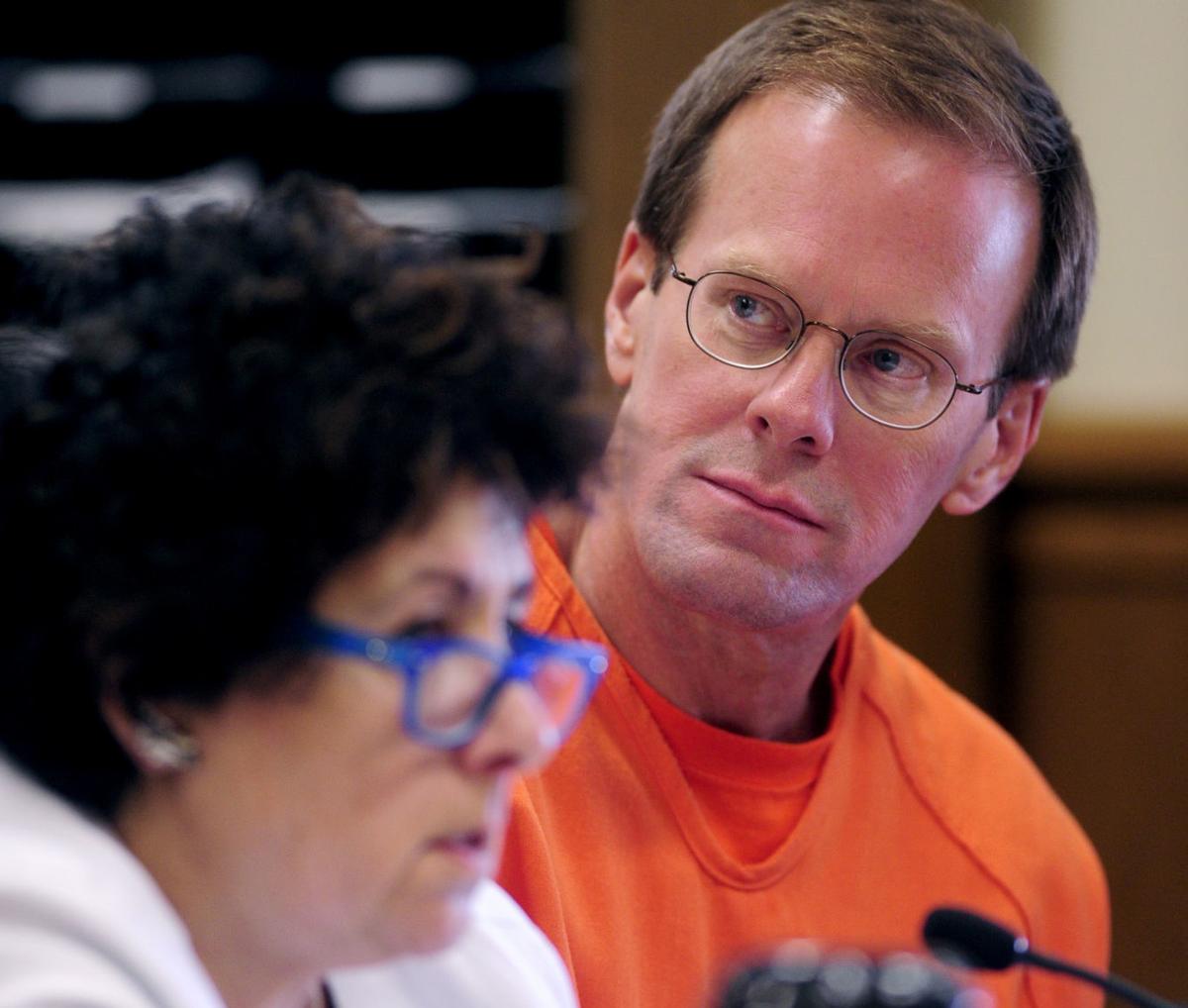 Mark Jensen looks toward prosecutors during a court hearing in 2017.