Become a Member
Read Today's E-edition
Share This
WATCH NOW: Rittenhouse collapses in tears as jury announces he is not guilty on all counts
Share this
1 of 5 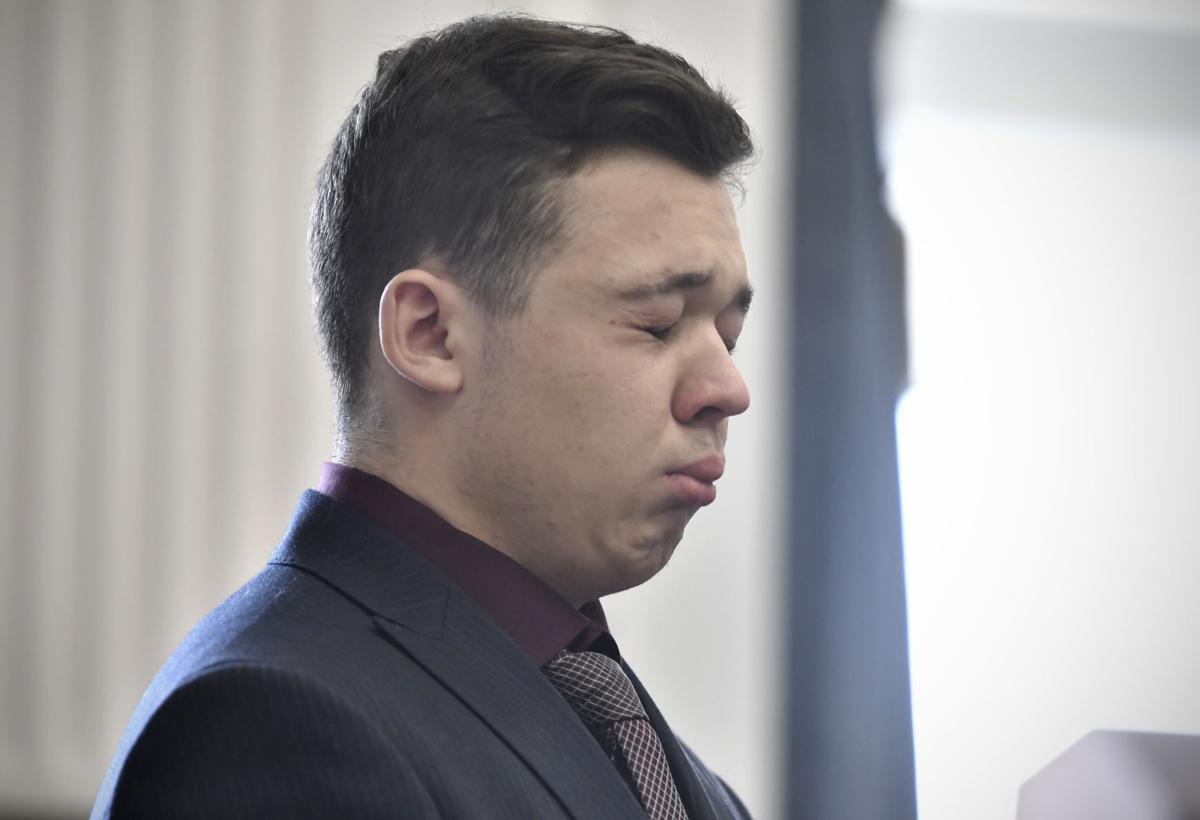 Kyle Rittenhouse closes his eyes and cries as he is found not guilty on all counts during his trial Friday at the Kenosha County Courthouse. 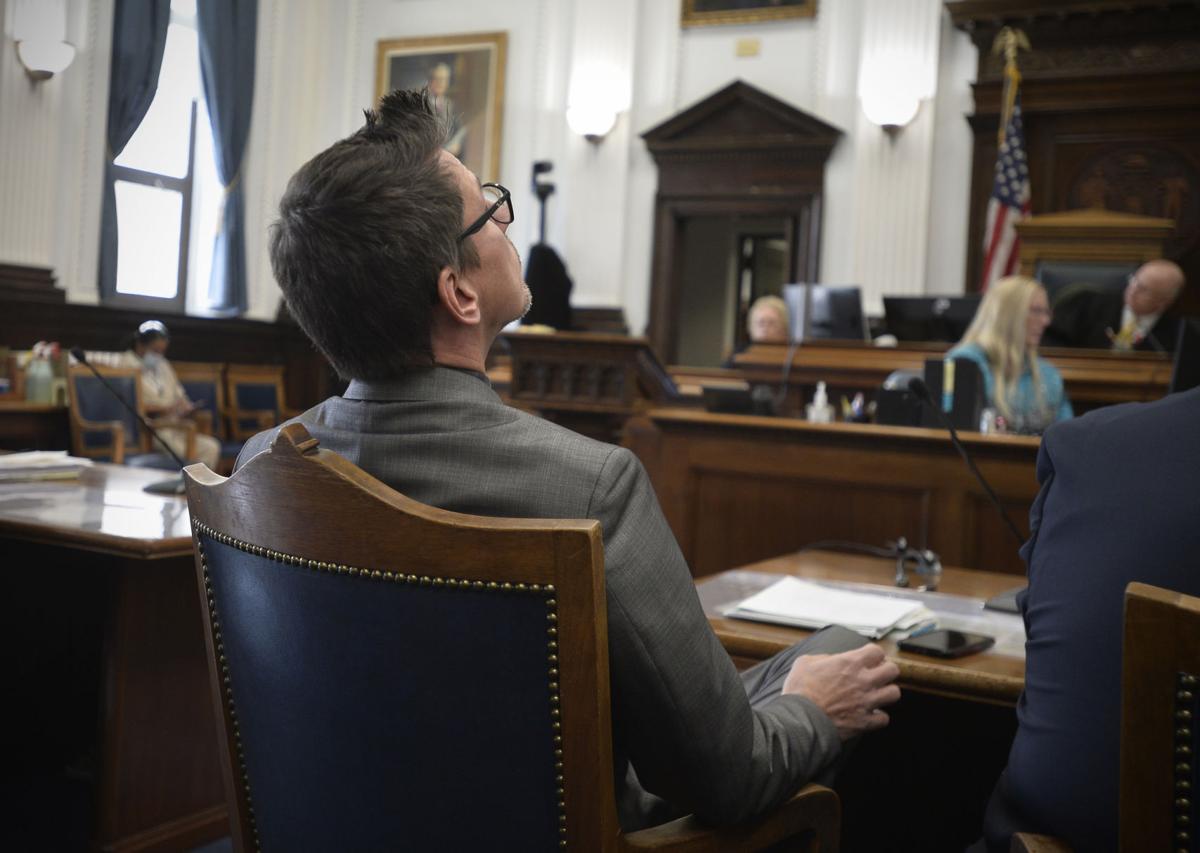 Assistant District Attorney Thomas Binger, center, holds his gaze to the ceiling as he waits or verdicts in Kyle Rittenhouse's trial to be read at the Kenosha County Courthouse on Friday. 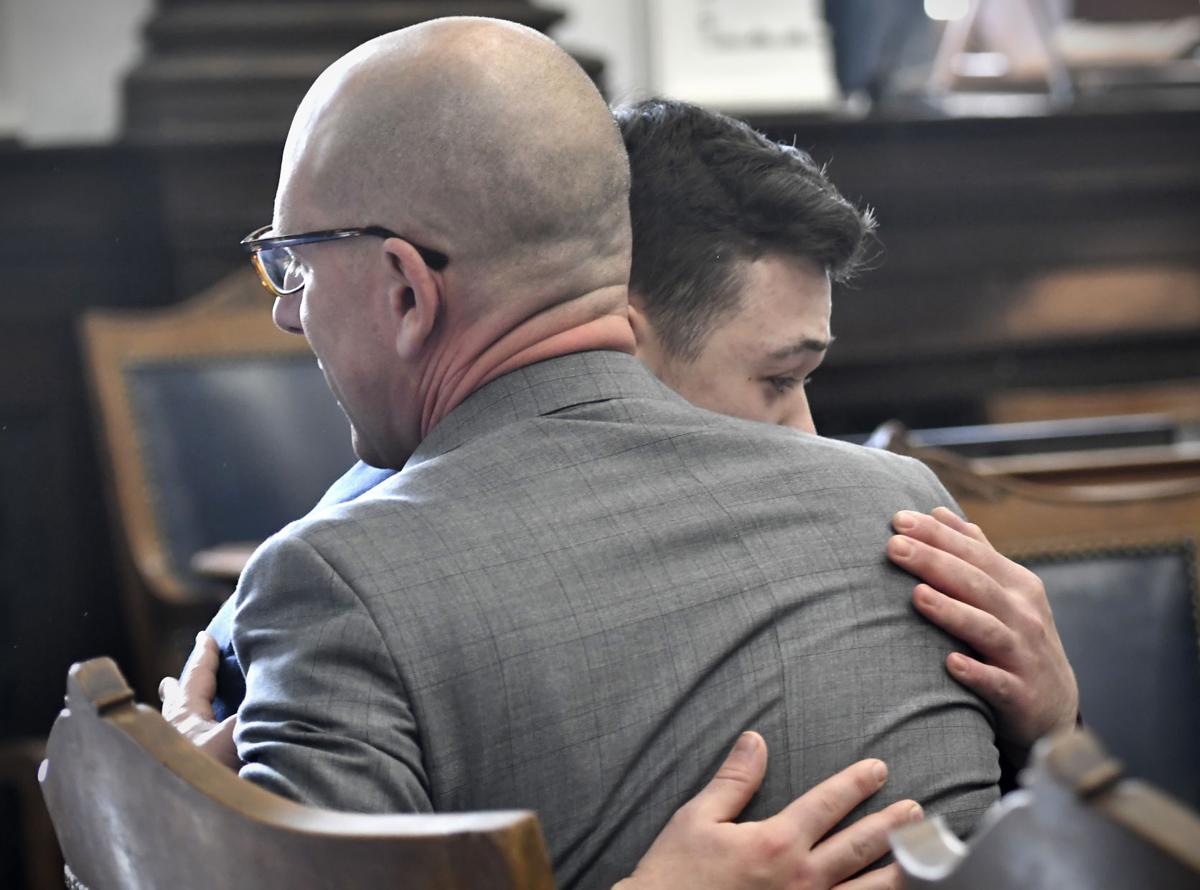 Kyle Rittenhouse hugs one of his attorneys, Corey Chirafisi, after he is found not guilt on all counts Friday at the Kenosha County Courthouse. 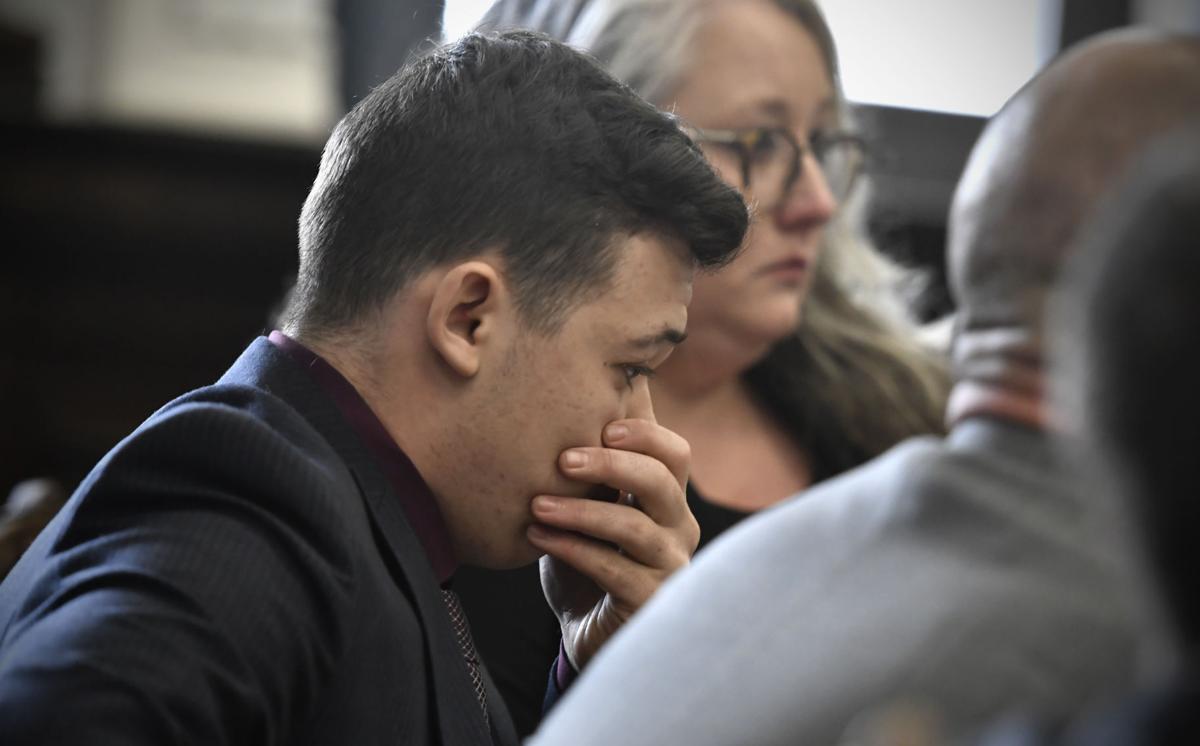 Kyle Rittenhouse puts his hand over his face after he is found not guilty on all counts at the Kenosha County Courthouse.

Kyle Rittenhouse’s legs gave out under him as a clerk read the verdict of a jury that had been deliberating for three-and-a-half days — not guilty on all counts.

The clerk shortly after 12:15 p.m. Friday read the verdicts one by one:

On the first count, first-degree reckless homicide for the death of Joseph Rosenbaum — not guilty.

On the second count, first-degree recklessly endangering safety for shooting toward Richard McGinniss, a reporter for an online news site — not guilty.

On the third count, first-degree recklessly endangering safety for shooting toward an unidentified man —not guilty.

On the fourth count, first-degree intentional homicide for the shooting death of Anthony Huber — not guilty.

Rittenhouse was accused of killing Huber of Silver Lake and Rosenbaum of Kenosha and seriously injuring Grosskreutz of Milwaukee on Aug. 25, 2020, in the unrest that unfolded in Kenosha following the police shooting of Jacob Blake. His 15-day trial began Nov. 1 at the Kenosha County Courthouse with jury selection.

Rittenhouse and his legal team steadfastly held that the Antioch, Ill., teen was in Kenosha to help protect businesses from rioters and acted in self-defense when confronted by Rosenbaum, Huber and others.

As soon as the first verdict was read, Rittenhouse’s legs began to shake violently, he broke into tears and he started to collapse. Crying, he hugged his attorney Corey Chirafisi. In the gallery, his mother, Wendy, began to cry quietly.

Across the aisle, Hannah Gittings, Huber’s girlfriend, was crying as well.

In the hour after the verdict, defense attorney Mark Richards held a press conference outside his Racine law office.

At his press conference, Richards spoke of the “living hell” Rittenhouse went through but said little about the men killed or injured by Rittenhouse. As he did during the trial, Richards painted Rosenbaum as the villain of the case.

“I don’t want to speak ill of the dead, but he wasn’t a nice person and everyone knows it,” he said.

Richards repeated many of the arguments he used at trial, criticized the way prosecutors handled the case, and took a shot at Rittenhouse’s original attorneys John Pierce and Lin Wood. He also said he didn’t believe Rittenhouse regretted coming to Kenosha on Aug. 25, 2020 armed with an AR-15-style rifle strapped to his chest.

“I don’t believe he does,” Richards said. “You know, if he had to do it all over again and the same thing was going to happen and your life was going to be put in a living hell for a year and you’re not going to know whether you are going to be a free man, he would say I’m not going to go. But we can’t undo time.”

“The jury, representing our community, has rendered its verdict in the Kyle Rittenhouse case. While we are disappointed with the verdict, it must be respected.” Binger wrote. “We are grateful to the members of the jury for their diligent and thoughtful deliberations. The Kenosha community has endured much over the past 15 months, and yet we remain resilient and strong. We ask that members of our community continue to express their opinions and feelings about this verdict in a civil and peaceful manner.”

Kenosha County District Attorney Michael Gravely was did not take an active part in the prosecution and was not in the courtroom during the trial.

“We respect the jury verdict based on three and a half days of careful deliberations,” Gravely said in a statement issued Friday. “Certainly, issues regarding the privilege of self-defense remain highly contentious in our current times. We ask that all members of the public accept the verdicts peacefully and not resort to violence.”

Rittenhouse was facing the possibility of life in prison if convicted of all the charges. Going into the trial, legal experts said prosecutors faced long odds in winning a conviction, but as jury deliberations continued there was growing speculation that Rittenhouse could be convicted on some of the charges or that the jury would be hung.

Nearly as soon as the clerk completed reading the verdict, and before the jury had even left the room, Rittenhouse was hustled from the room by a Kenosha County Sheriff’s deputy.

Asked whether Rittenhouse would remain in the area, Richards said he thought he would settle elsewhere. Will he keep a low profile? a reporter asked. “I hope so,”

Jurors were taken from the courthouse with deputies providing security. Jurors had no comment when reporters called out questions about the verdict.

The family members of the men killed were also escorted from the room by deputies and to a nearby elevator. Before the jury returned their verdict, Huber’s girlfriend Hannah Gittings said she was not hopeful that Huber — who she and supporters felt had acted as a hero in trying to stop Rittenhouse after he shot Rosenbaum — would receive justice in the case.

“Honestly I am just ready for it to be over and done with at this point,” Gittings said as she waited in the courthouse hallway earlier in the week while the jury was still deliberating. “It’s just really a closure thing for me, because not matter what the outcome is it won’t change anything.”

Gittings said she felt people were so wedded to their opinions of Rittenhouse’s actions that the verdict would not shift their beliefs. “That’s the big discrepancy that I hope people will wake up to,” she said. “It’s two sides of fearmongering.”

Huber’s parents issued a statement on the verdict through their attorney.

We are heartbroken and angry that Kyle Rittenhouse was acquitted in his criminal trial for the murder of our son Anthony Huber. “There was no justice today for Anthony, or for Mr. Rittenhouse’s other victims, Joseph Rosenbaum and Gaige Grosskreutz,” Karen Bloom and John Huber said through their attorney

John Huber has attended nearly all the pretrial hearings on the case through a Zoom link. But Huber’s parents did not attend the trial, saying through their attorney they stayed away because of the graphic videos shown at trial and because of the “nasty” comments they have received.

“Today’s verdict means there is no accountability for the person who murdered our son. It sends the unacceptable message that armed civilians can show up in any town, incite violence, and then use the danger they have created to justify shooting people in the street,” Huber’s parents stated. “We hope that decent people will join us in forcefully rejecting that message and demanding more of our laws, our officials, and our justice system.”

“I think the jury focused on Rittenhouse’s testimony and believed him when he said he had no choice but to do what he did,” Cafferty said. “That combined with the video evidence they relied on. And once they found him not guilty on the first count the dominoes fell from there.”

At the courthouse steps Tuesday

Kyle Rittenhouse closes his eyes and cries as he is found not guilty on all counts during his trial Friday at the Kenosha County Courthouse.

Assistant District Attorney Thomas Binger, center, holds his gaze to the ceiling as he waits or verdicts in Kyle Rittenhouse's trial to be read at the Kenosha County Courthouse on Friday.

Kyle Rittenhouse hugs one of his attorneys, Corey Chirafisi, after he is found not guilt on all counts Friday at the Kenosha County Courthouse.

Kyle Rittenhouse puts his hand over his face after he is found not guilty on all counts at the Kenosha County Courthouse.