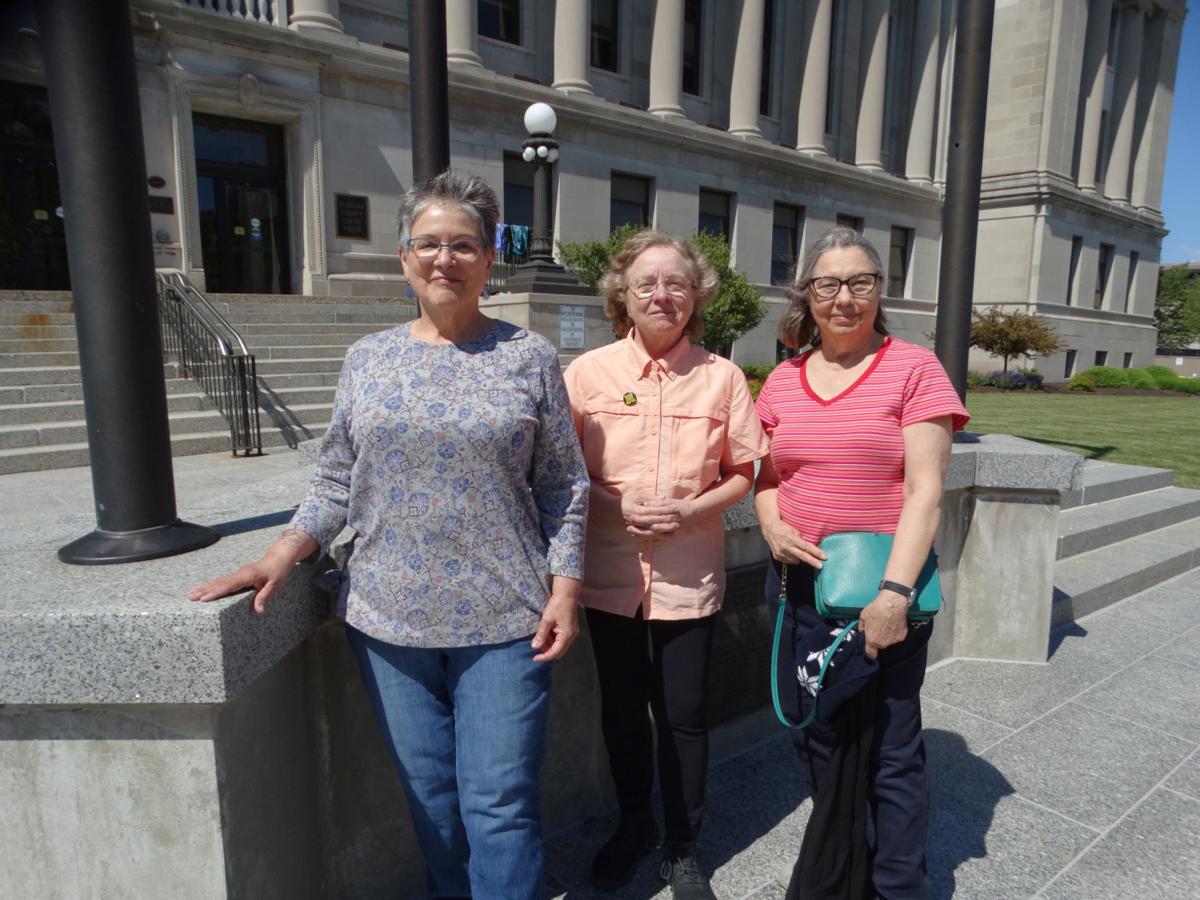 From left, Dani Lockwood, Mary Kay Schleiter and Judy Thornber faced police and the National Guard in Chicago during the Democratic National Convention in Chicago in 1968 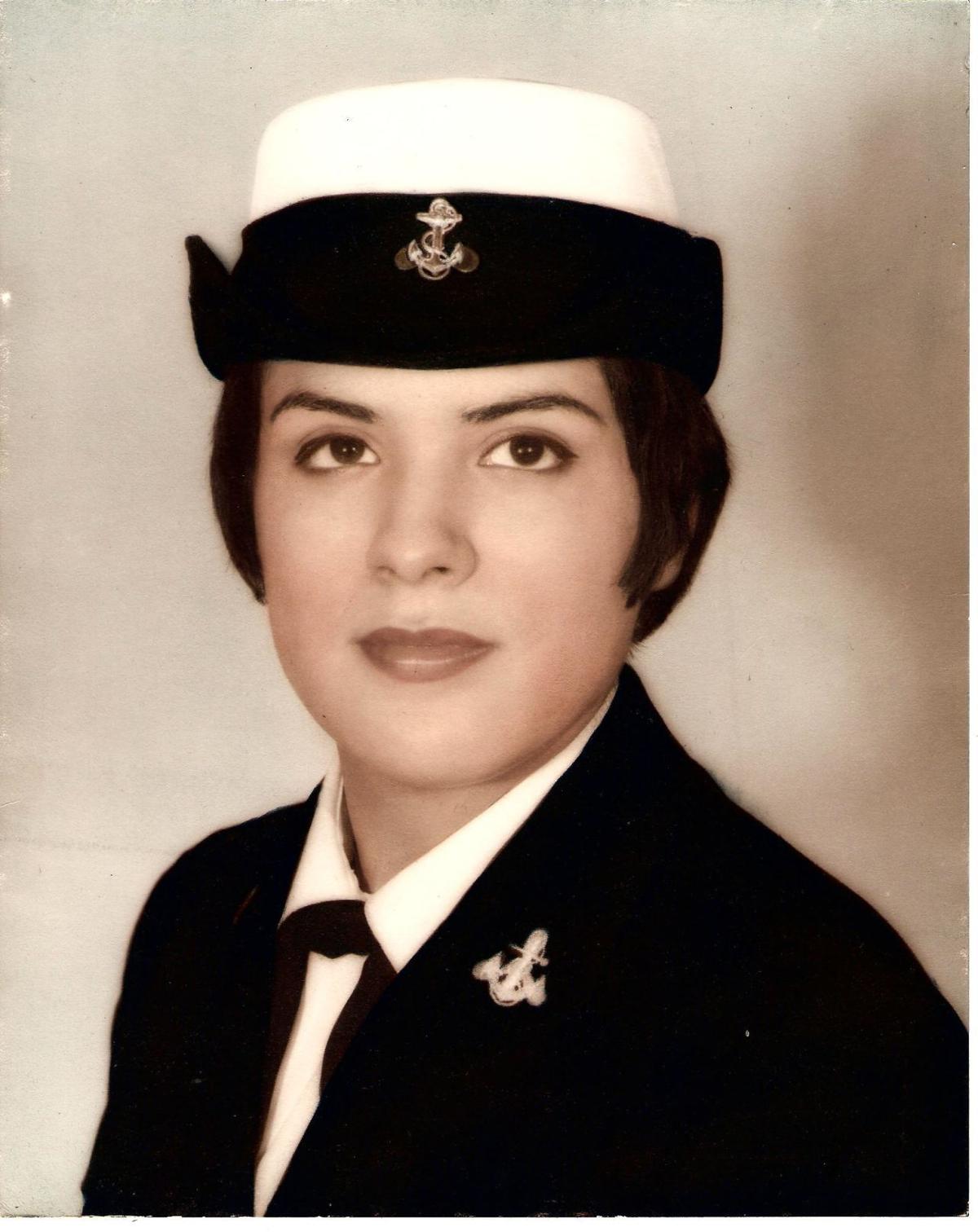 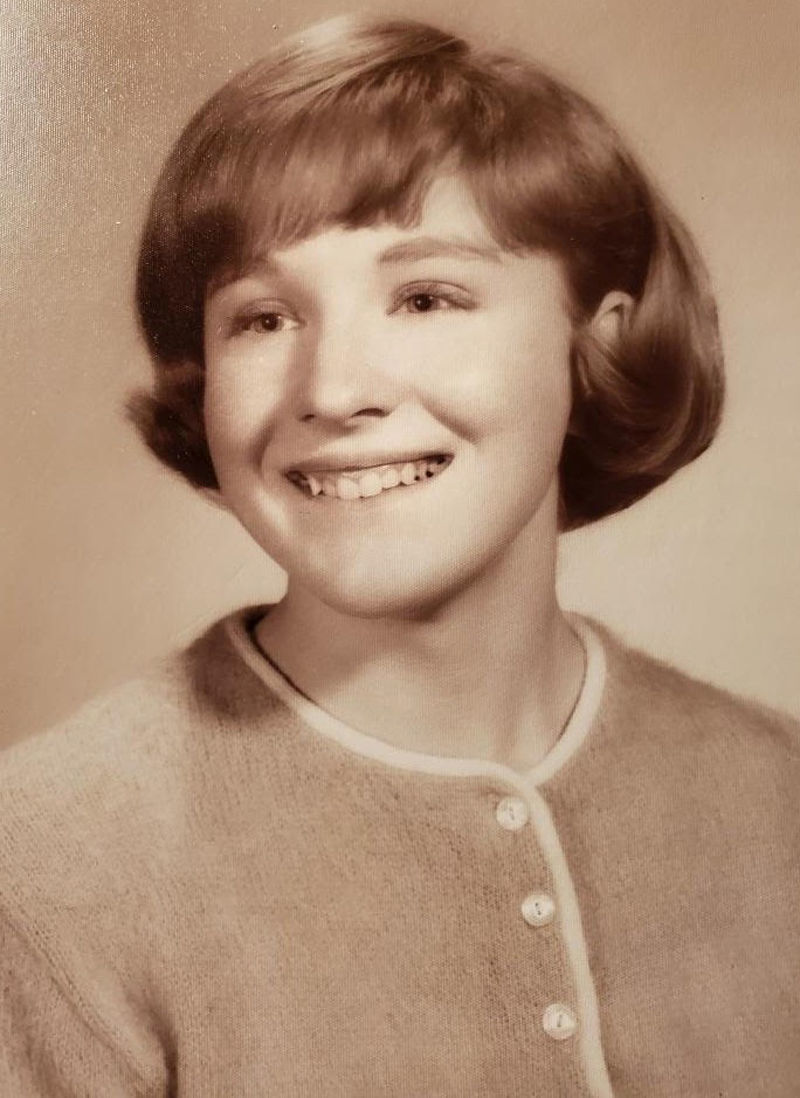 Dani Lockwood parts her hair to show a scar on her scalp, courtesy of a policeman’s club during the 1968 Democratic National Convention protests in Chicago.

“Do you know how much a head wound bleeds?” she asks rhetorically.

The scar is a constant reminder of when police threw tear gas, broke ranks and pushed into the crowd swinging batons on the evening of Aug. 28, 1968.

“It seemed to go on forever. You lost all sense of time,” said Lockwood of the adrenaline-fueled episode. “You don’t have time to be afraid.”

As endless scenes of protesters, some being met with police violence, marched across screens big and small this month, Lockwood, Judy Thornber and Mary Kay Schleiter have watched with knowing eyes.

The three friends from Bradford Community Church Unitarian Universalist in Kenosha were astonished earlier this year to discover that all three had been there on the streets of Chicago during the Democratic National Convention 52 years ago.

The traumatic year of 1968 saw the assassinations of Martin Luther King in April and Sen. Robert Kennedy in June. Americans reeled from the one-two punch; we began to worry that violence had become a toxic part of America’s fabric.

Both events rattled those in the peace movement and, by summer, protests against the war in Vietnam began to swell. Leaders focused on the upcoming Democratic Convention, Aug. 26-29 in Chicago.

Powerful Mayor Richard J. Daley wanted to showcase his town and was well known as a “law and order,” hard-line politician. He had 12,000 police, 5,000 National Guardsmen and 7,500 regular Army troops geared up and ready to take control.

Daley’s attitude against streets of unrest were made clear when King was murdered and rioting took place on Chicago’s West Side. “Daley had said to shoot to kill,” Schleiter said.

Most of the protesters came to Chicago to have their voices heard by those inside the International Amphitheatre,, where the convention was being held. The Democratic Party’s complicity in the war in Vietnam stirred their rage. They expected their words to fall on deaf ears in the conservative Republican Party, but they could not abide it from the Democrats.

Came for a festival

Lockwood came to Chicago that week to visit friends and be where the action was. She was 21 years old and on furlough from the Navy where she was a part of the Hospital Corps.

She had seen the damage done to the bodies of returning soldiers; the paraplegic and quadriplegic casualties and was trying to make sense of it all.

She wanted to enjoy the “Festival of Life” in Lincoln Park on Aug. 26 and show her support for the anti-war movement, something frowned upon by the military, she said.

Billed as a “Celebration of Counterculture and Anti-War Protest,” the festival had music and speakers and was very non-threatening, Lockwood said.

“They were going to clear the park at 11; we left at 10 p.m.,” Lockwood recalled. When she later heard that some police had roughed up those who were still in the area, she thought it was an anomaly.

So when she went to Grant Park two days later, she was unafraid.

Mayor Daley had steadfastly refused to issue any permits for a march. There was a permit issued to gather at the band shell in Grant Park, but protesters wanted to be seen by the convention delegates and television cameras, which would involve a five-mile march to the amphitheater.

The best day to do that would be Aug. 28, when the Democrats would select their nominee for president.

In the early evening, the protest leaders made their move, but they didn’t get far.

Lost all sense of time

“Have you ever seen on National Geographic (Channel) a big ball of fish, getting compressed down and the sharks are circling it?” asked Lockwood. “That’s the image I have in my mind. It (the police action) was to keep everybody from marching down to the amphitheater. We all got stuck in front of the Hilton, 10,000 people and no place to go.

“If you are in the middle of a riot, a sense of unreality grips you. You think ‘this can’t be happening; this can’t be real,’” Lockwood said, shaking her head slowly. “When you are surrounded by total chaos, people being clubbed and hit and stomped — men and women, young and old — that flight instinct takes over and you don’t have time to form a conscious thought, you just want to get the hell out of there in one piece.”

The events of Aug. 28 were later deemed a police riot, with little restraint shown.

“The police made no distinction on who they went after,” Thornber said. “Anybody who was on the street in the Loop, whether it was a business person walking out of their office, anybody who just happened to be in the vicinity … there were people on all the street corners with their heads busted open.”

Thornber, who lived in Hyde Park, Ill., was 27 years old and dressed appropriately to attend the convention. A Canadian friend of hers from law school had been able to get a pair of credentials for a political activity at the Conrad Hilton Hotel and invited her to come along.

“To our left we saw police, but now I believe they were National Guard, with bayonets, and there was a crowd of protesters running north on Michigan,” explained Thornber. “We were right in the middle between the row of bayonets and the protesters.

“My friend wanted to stop and explain to a policeman that we had credentials and were headed to the Hilton, and I said ‘Hell no, run that way!’”

Instead of fear, Thornber said she felt exhilarated as she ran, since she was 20 to 30 feet away from the approaching enforcers.

They ran at the back of the crowd and were able to circle around a couple of blocks down.

“That’s when I saw bleeding people on street corners all over the place,” Thornber said somberly, adding they were able to get into the Hilton and listen to the speakers.

UW-Parkside Associate Professor Mary Kay Schleiter was 19 years old and about to start her sophomore year at Loyola College. She lived in Rogers Park, Ill., and saw the violence on the television on the night of Aug. 28.

She, too, was opposed to the war and went down to Grant Park the next morning to visit the scene.

“I was really shocked at the number of injuries; people with bandages on their heads and broken arms. People were taking care of each other’s injuries,” Schleiter said. “It looked like a battleground, what it looks like after a battle.”

There was a real sense of community in Grant Park, she said, no matter where people were from, they were friendly and helping with the wounded.

She wasn’t fearful yet tried to stay away from police.

But what Schleiter saw that morning affects her to this day.

For Schleiter, it emphasized the importance of the peace movement. It was no longer theoretical, it was real.

“If people were getting beat up in Grant Park in Chicago, you could just imagine what was happening to people in Vietnam.”

Over the years, the Kenosha women have learned the undercurrent reasons for what happened in Chicago in 1968.

At that time, protesters were looked upon as Communists and traitors. The cultural gap and class divide between the young college student protesters and the blue-collar foot policemen was a deep chasm.

“Their world views were so disparate,” Schleiter said. “Neither side saw the humanity in each other.”

Only a few months earlier, the police had witnessed the entire west side of Chicago go up in flames, with 125 fires, and they were primed to be vigilant. They knew Daley had their back. They would face no repercussions, although there was an investigation of the police actions and a report written.

In recent protests, police have been seen taking a knee with protesters in a sign of solidarity. That action seemed unimaginable in 1968, Lockwood and Thornber say.

In addition, cell phones have changed everything. It’s much harder to hide such actions when cameras on the street and cameras hovering overhead capture every move.

What is playing out on our streets today is not limited to big cities like Chicago but is seen in small towns as well, Schleiter said.

One thing hasn’t changed: Everybody has an opinion. Then it was about the war, today it is about racial injustice.

“There are no bystanders today,” said Lockwood. “Even if you want to be vocal about it — and at times you can’t — you have an opinion and back then everyone had one, too.” 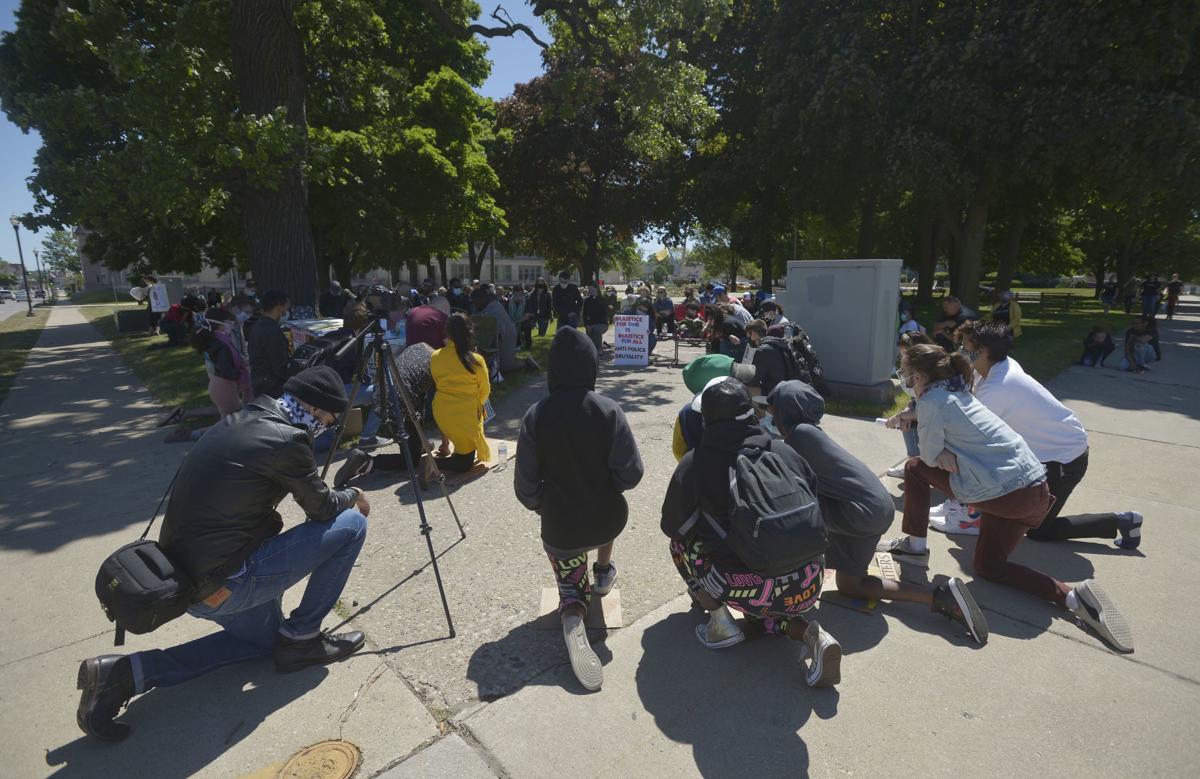 Above: Demonstrators kneel during the Kneel for Nine rally at Civic Center Park on Saturday. 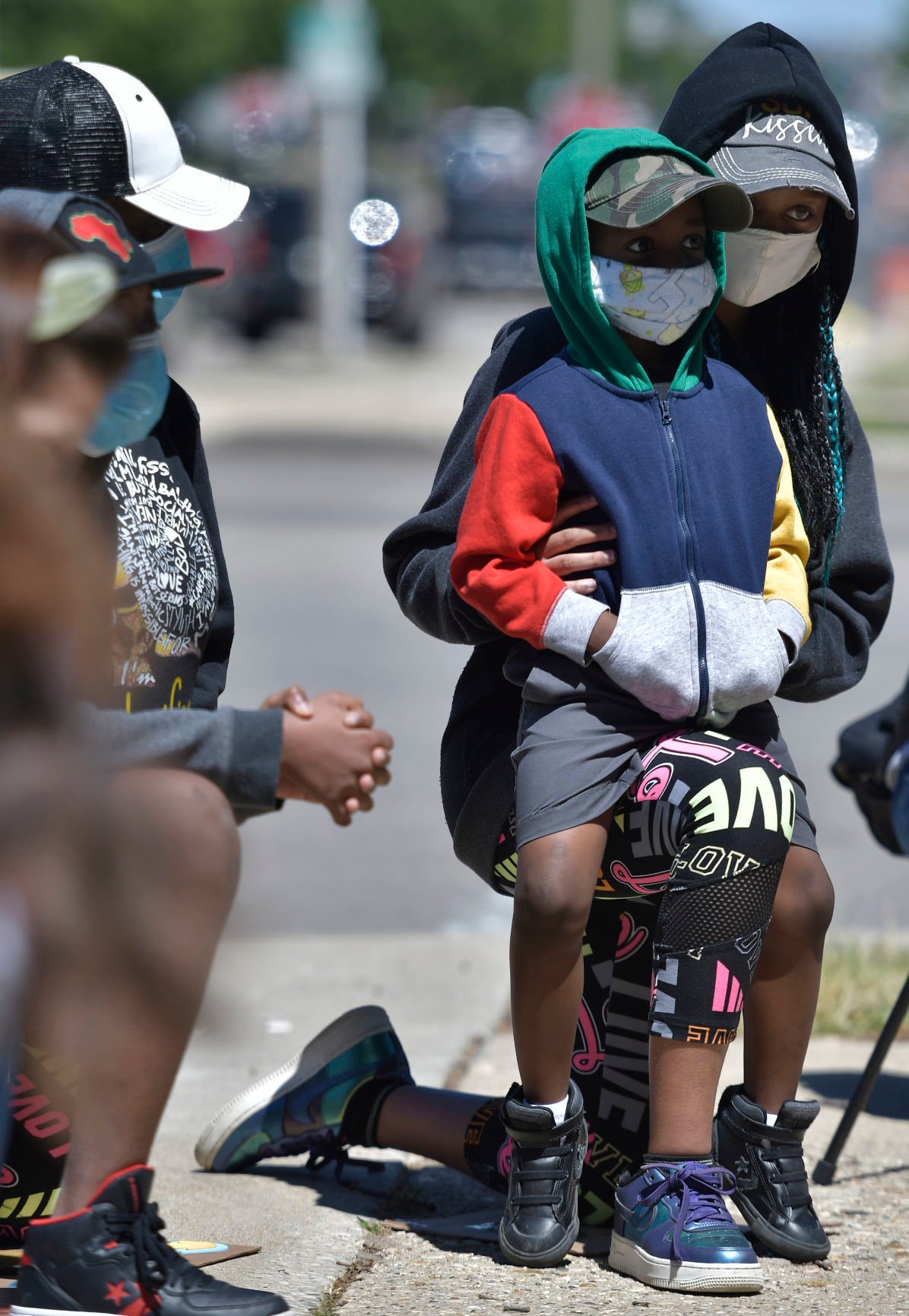 Left: Nykesse, Thompson, 5, sits on his sister’s, Niara, 14, knee during the Kneel for Nine rally at Civic Center Park. 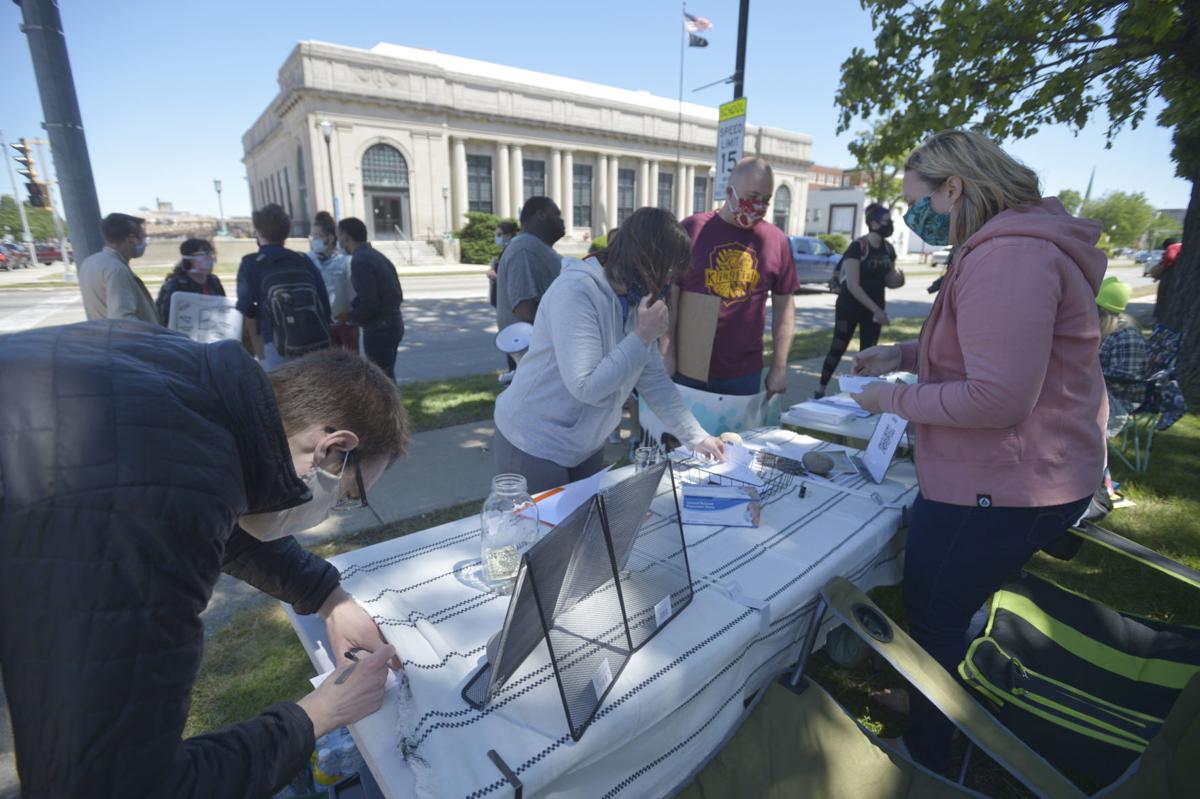 Above: Members of the community fill out information for the Human First Project during the Kneel for Nine rally at Civic Center Park. 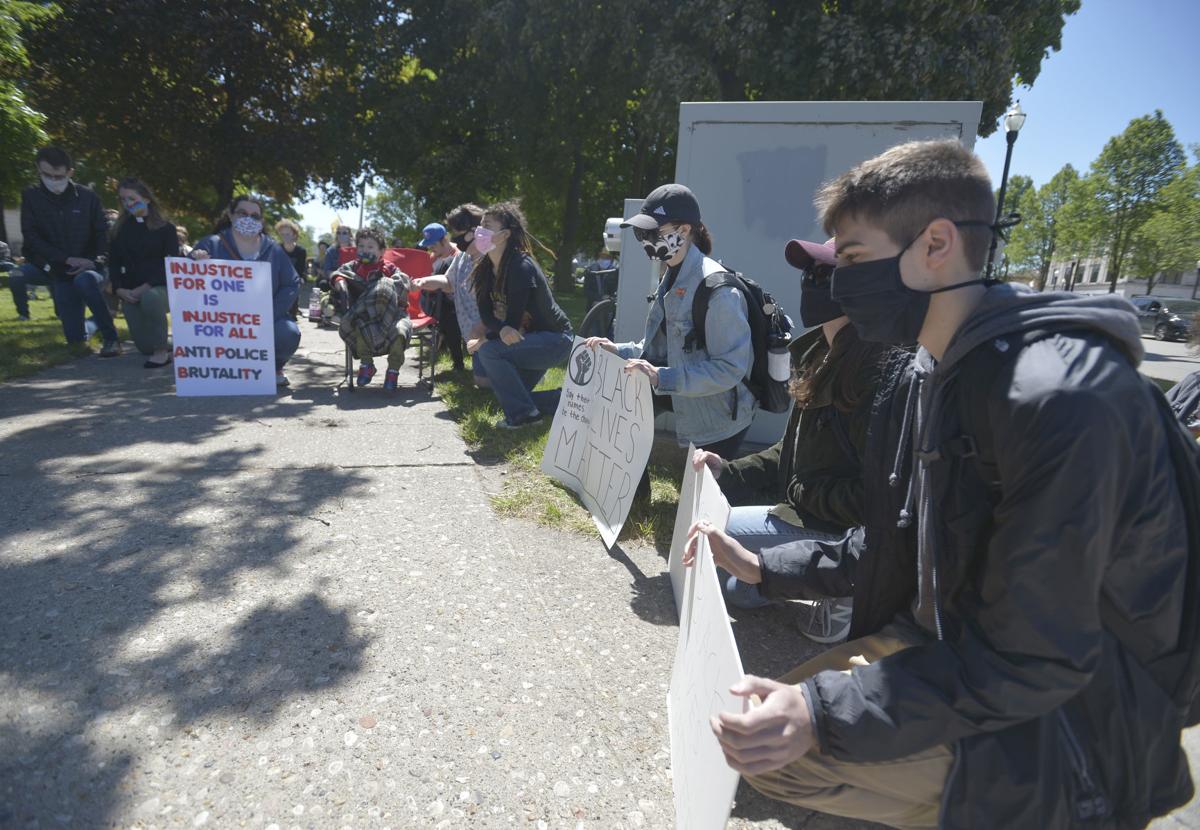 Demonstrators kneel during the Kneel for Nine rally at Civic Center Park on Saturday. 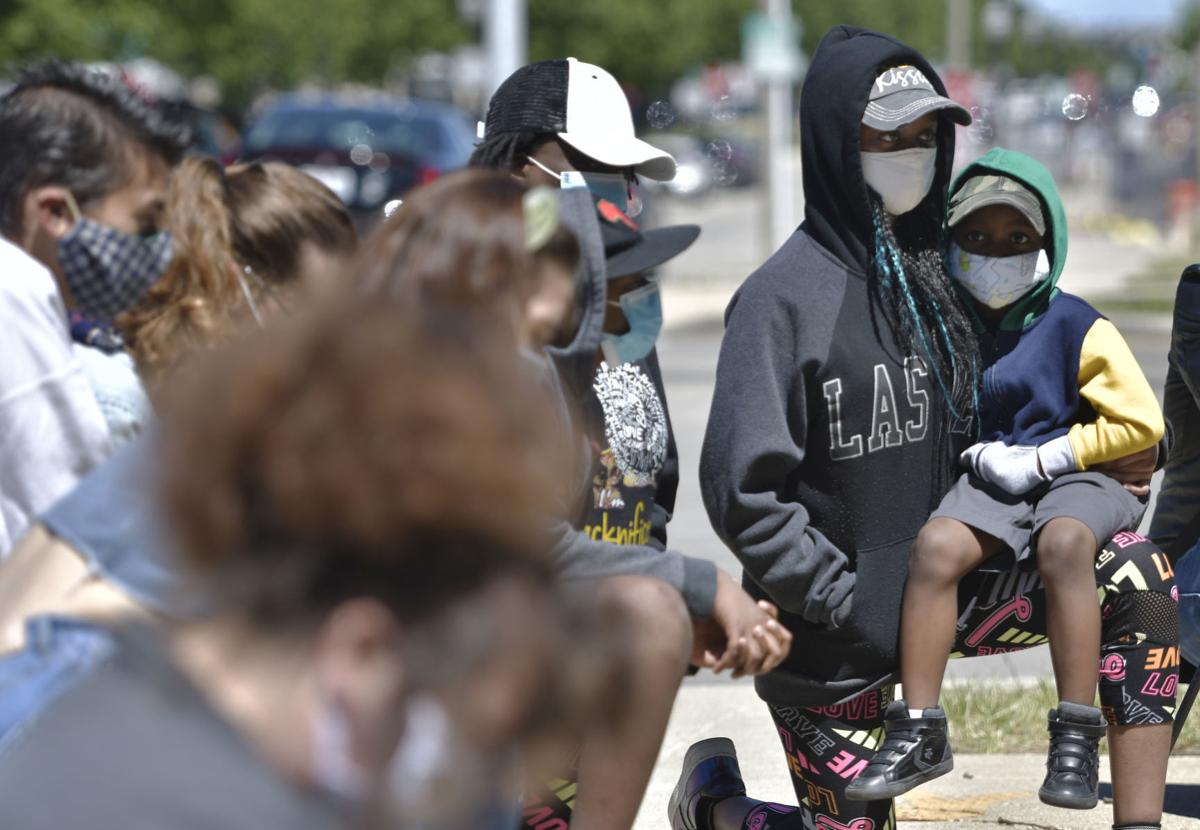 Nykesse, Thompson, 5, sits on his sister’s, Niara, 14, knee during the Kneel for Nine rally at Civic Center Park. 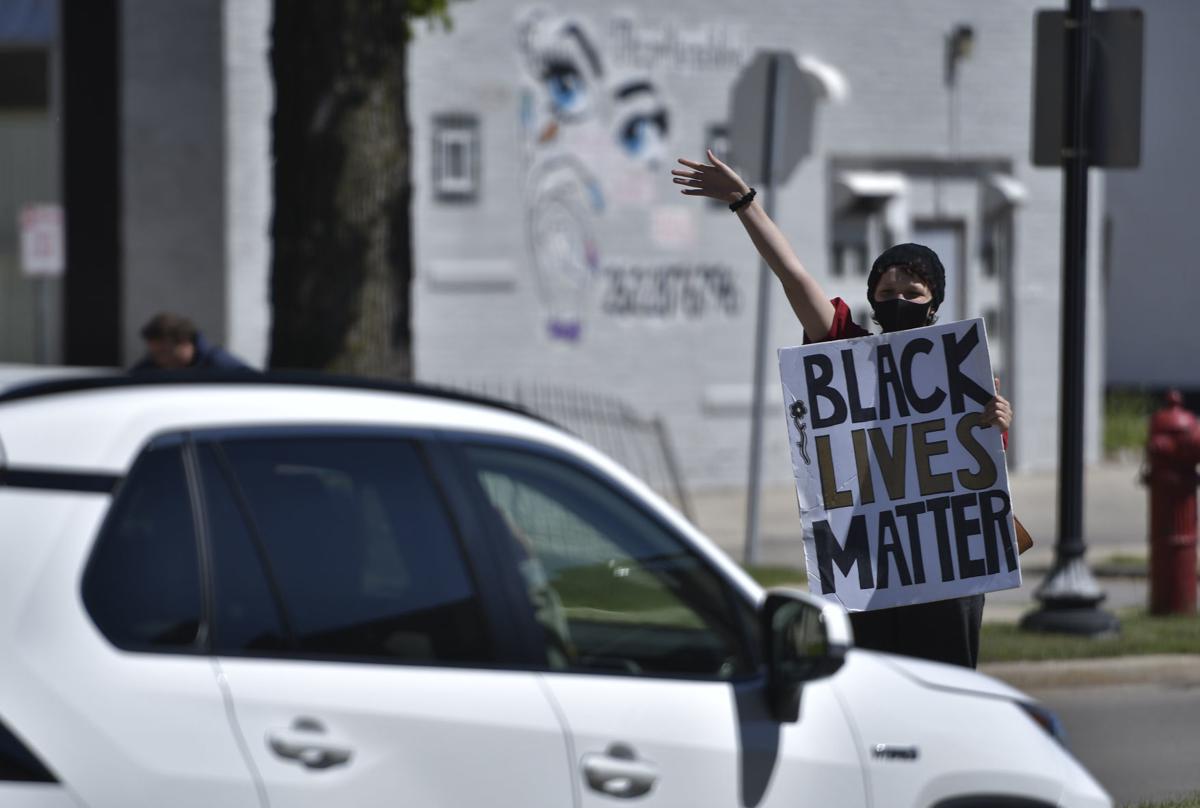 A woman holds a sign for traffic to see during the Kneel for Nine rally. 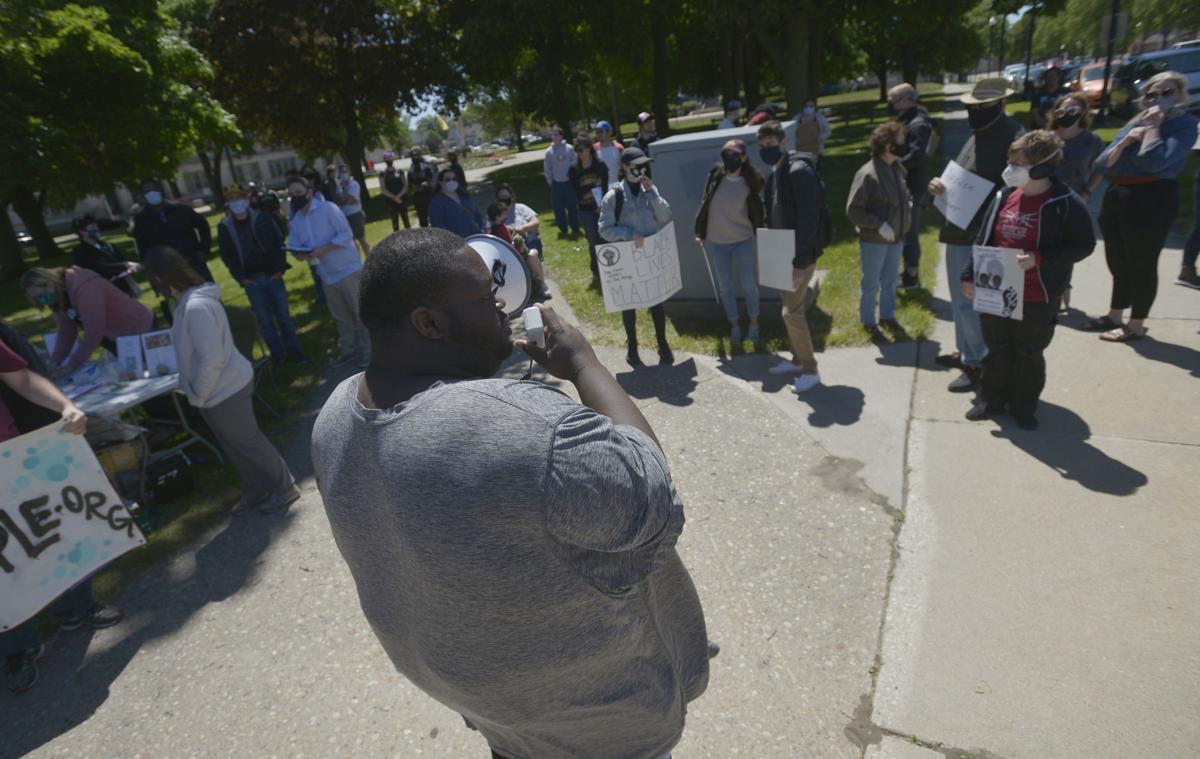 Isaac Wallner speaks to a group during the Kneel for Nine rally at Civic Center Park on June 13.

Above: Demonstrators kneel during the Kneel for Nine rally at Civic Center Park on Saturday.

Left: Nykesse, Thompson, 5, sits on his sister’s, Niara, 14, knee during the Kneel for Nine rally at Civic Center Park.

Above: Members of the community fill out information for the Human First Project during the Kneel for Nine rally at Civic Center Park.

Demonstrators kneel during the Kneel for Nine rally at Civic Center Park on Saturday.

Nykesse, Thompson, 5, sits on his sister’s, Niara, 14, knee during the Kneel for Nine rally at Civic Center Park.

A woman holds a sign for traffic to see during the Kneel for Nine rally.

Isaac Wallner speaks to a group during the Kneel for Nine rally at Civic Center Park on June 13.

From left, Dani Lockwood, Mary Kay Schleiter and Judy Thornber faced police and the National Guard in Chicago during the Democratic National Convention in Chicago in 1968