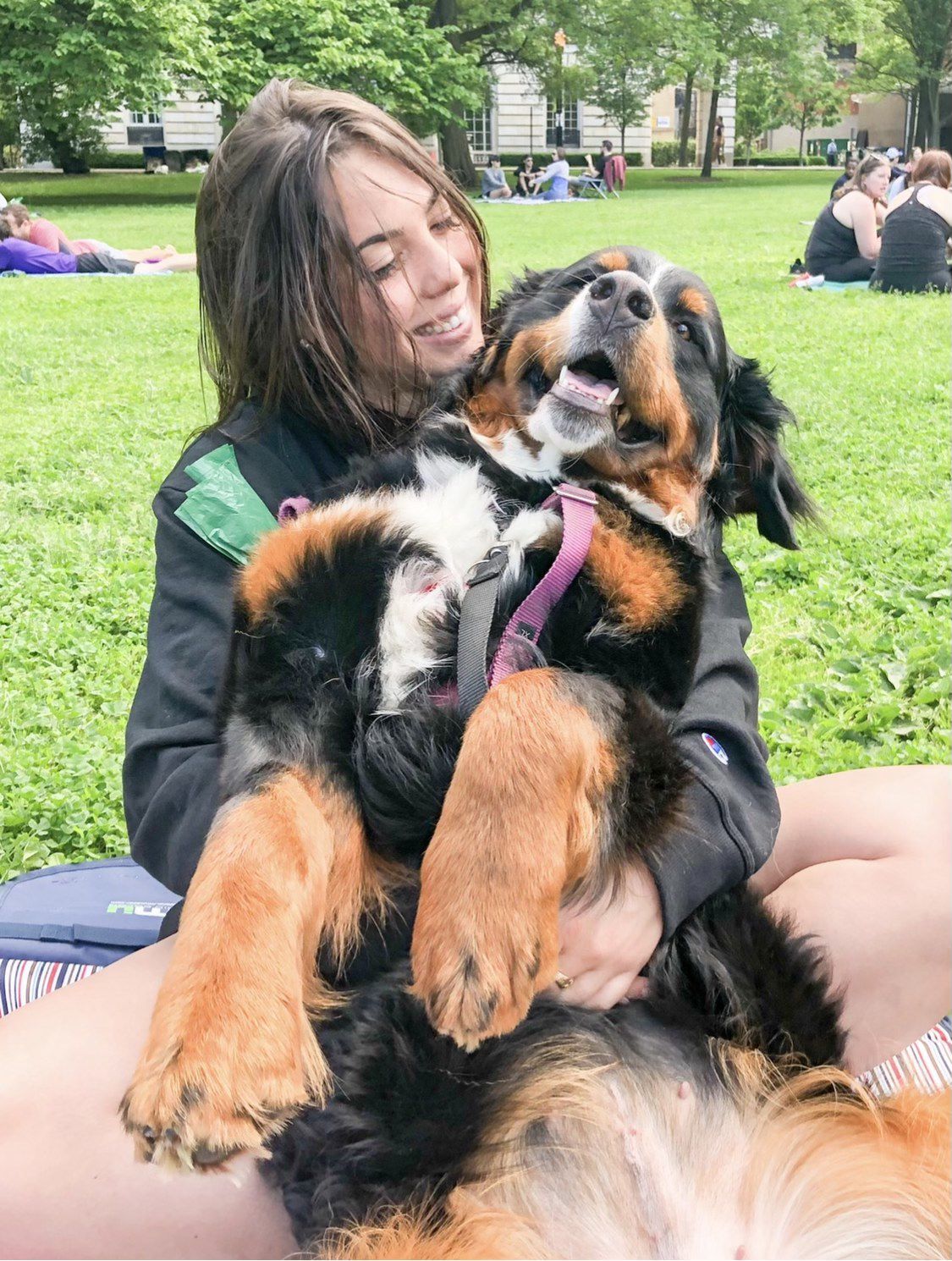 Courtney Kennedy, 28, with her dog Abbey, missing since Dec. 27. 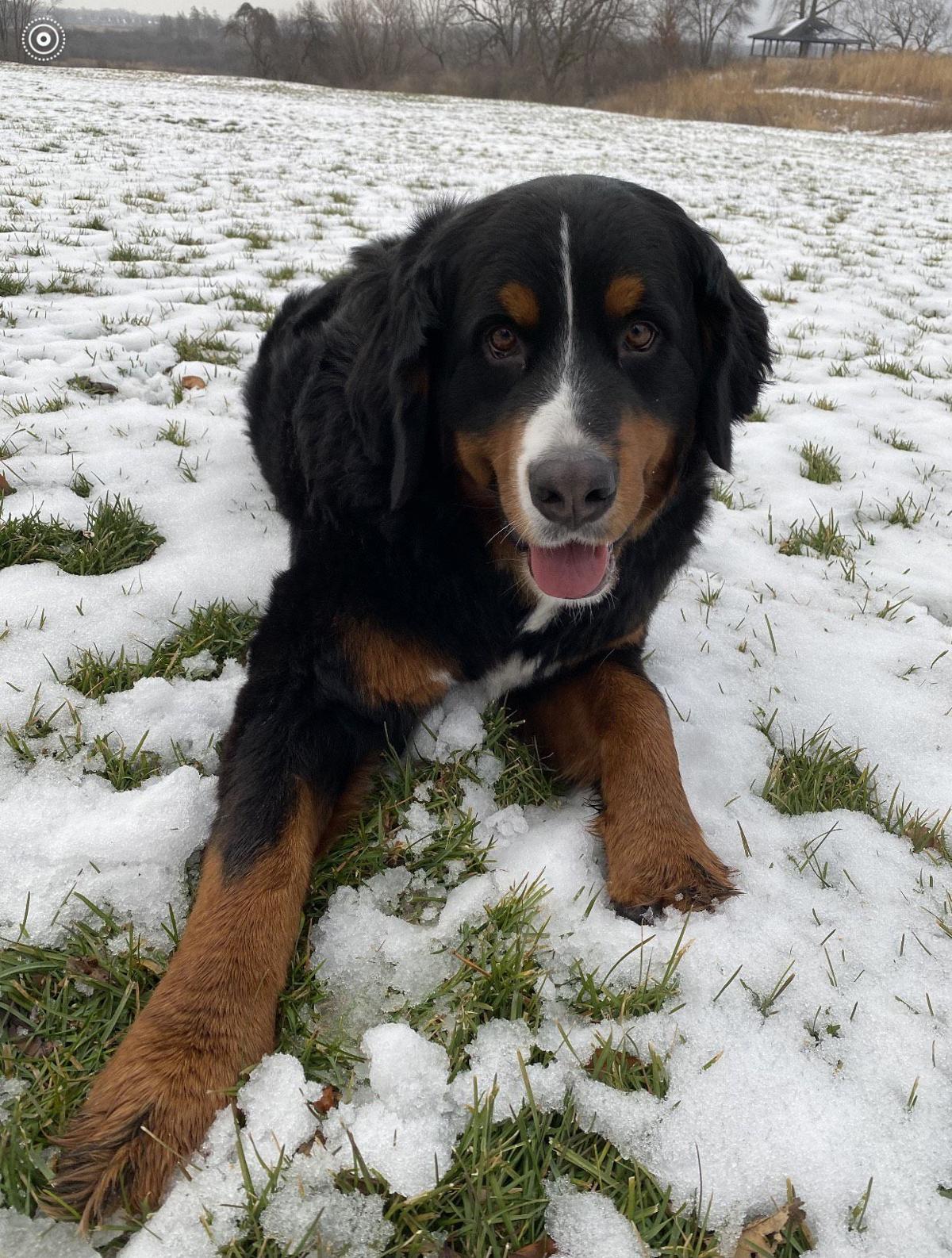 Abbey has been missing since Dec. 27. 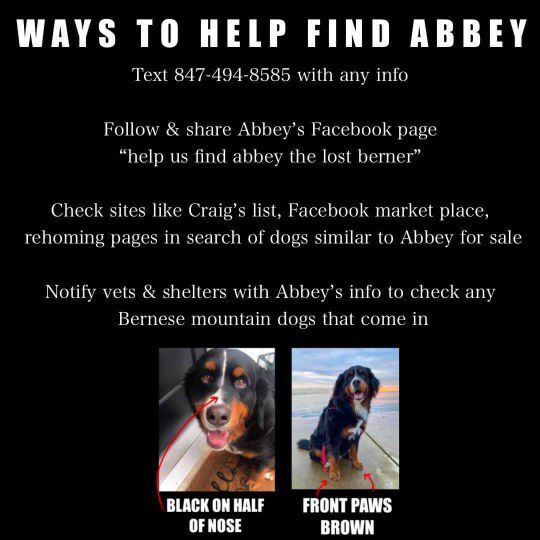 TWIN LAKES — The search for a missing dog that disappeared from a fenced-in yard in Twin Lakes has people searching far and wide — on foot and with the help of dog psychics, sonar and drones.

Courtney Kennedy, 28, the owner of Abbey, a 2-year-old Burnese mountain dog that disappeared on Dec. 27, said she is not giving up the search for the dog that got her through some of her darkest days.

“I suffered with severe depression,” Kennedy said. “She helped me get healthy and helped me trust people again. My gut is saying she is still alive and we will find her. I just want my baby back.”

Kennedy got Abbey in November 2018 when the dog was 10 weeks old and 16 pounds. Now at 110 pounds, the gentle giant loved to play with children at a YMCA in south Chicago, where she served as a therapy companion.

“I let her outside at around 7:45 to play in the first snowfall,” Kennedy said of the night Abbey went missing.

Just 15 minutes later, she was gone. If Abbey ever left the yard through an open gate, she had never gone beyond visiting the neighbor’s dogs and always came back to the door. This was different. A group of 10 people searched that night for hours on foot.

Since then, flyers have been posted throughout southeastern Wisconsin and northern Illinois. Billy’s Posse, Inc., a lost dog search and rescue team serving Kenosha and Racine counties, joined the effort. Drones have been flown over open fields throughout the region.

“We even hired a sonar company to scan the frozen lakes,” Kennedy said. “We spread my scent, left trails of pizza and connected with dog psychics.”

Social media posts and photos of Abbey have been shared by hundreds, and volunteers are working on alerting every veterinarian and dog rescue in the Midwest. And people are scouring websites through which dogs are often re-homed or sold.

Abbey has distinctive markings that Kennedy said will help someone identify her. The right side of her snout is white, the left side is black, she has a thin white line between her eyes, her front paws are brown, her back paws have white toes, and her tail is almost entirely black.

Kennedy said two woman called her to report they saw a dog with similar markings at the Duck Farm Dog Park in Lake Villa, Ill., on Dec. 28. The dog was not responding to the man it was with, who made a comment to the woman that the dog could belong to them.

That, and other tips, lead Kennedy to believe Abbey may have been stolen.

“It’s hard to believe otherwise at this point,” Kennedy said.

Abbey, who is spayed and chipped, has some medical needs that will become evident without proper medication. Kennedy is hoping if someone did already buy Abbey, they will take her to a veterinarian.

Kennedy is offering a $1,500 reward for information that leads to Abbey’s return. While some have suggested she offer a larger reward, she doesn’t want to make a reward become the reason someone would steal another dog. She said if someone has Abbey, they can return her “no questions asked.”

Kennedy is asking anyone with information about or who may have seen Abbey to call her at 847-494-8585. Updates will be available on the “Help us find Abbey, the lost Berner” Facebook page.

A Kenosha educator is mourning the loss of her husband who died Jan. 3 from COVID-19 which she said she was exposed to at school and inadverte…

Dave Fountain was a complete educator. After a career as a principal with Kenosha Unified School District, he spent six years post-retirement …

A Kenosha Police officer was killed over the weekend in a snowmobile accident in Iron County in far northeast Wisconsin.

Courtney Kennedy, 28, with her dog Abbey, missing since Dec. 27.

Abbey has been missing since Dec. 27.