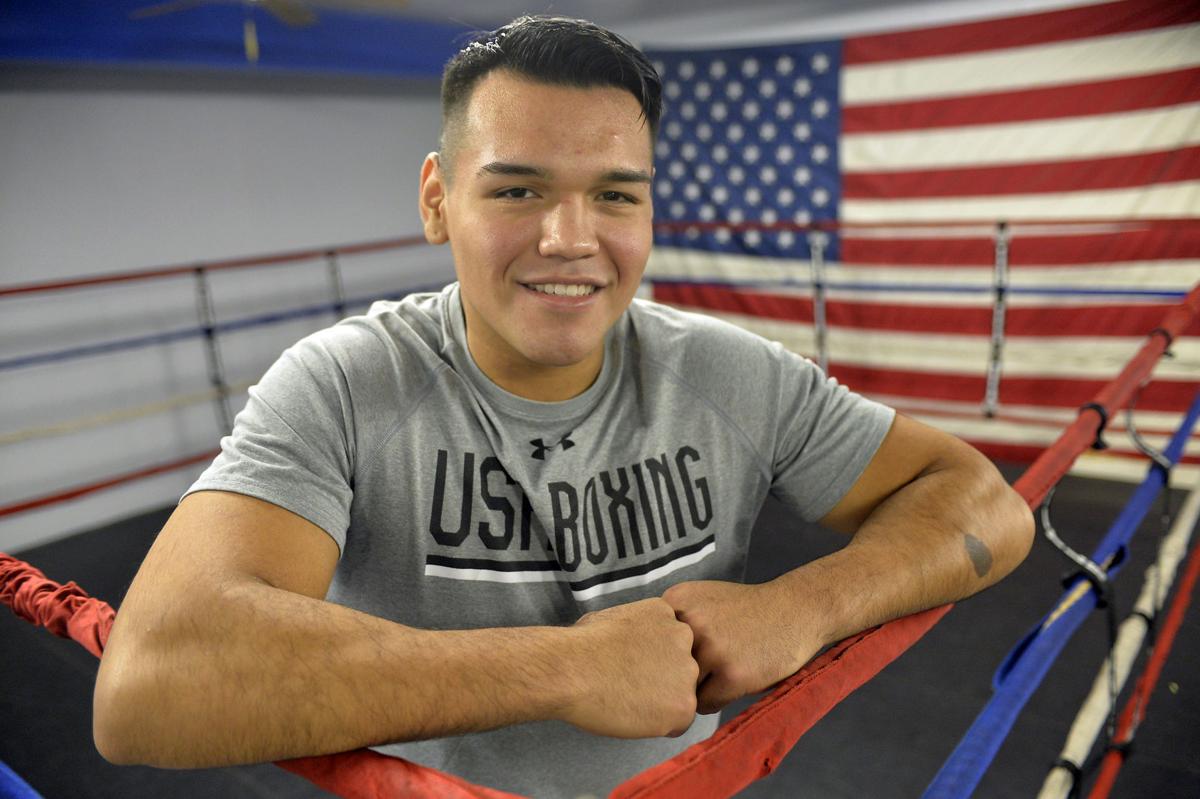 Luis Alvarado is training for a shot at qualifying for the U.S. Olympic team as a boxer in the super heavyweight class. Alvarado works out at the Tenacious Boxing Club in Kenosha. 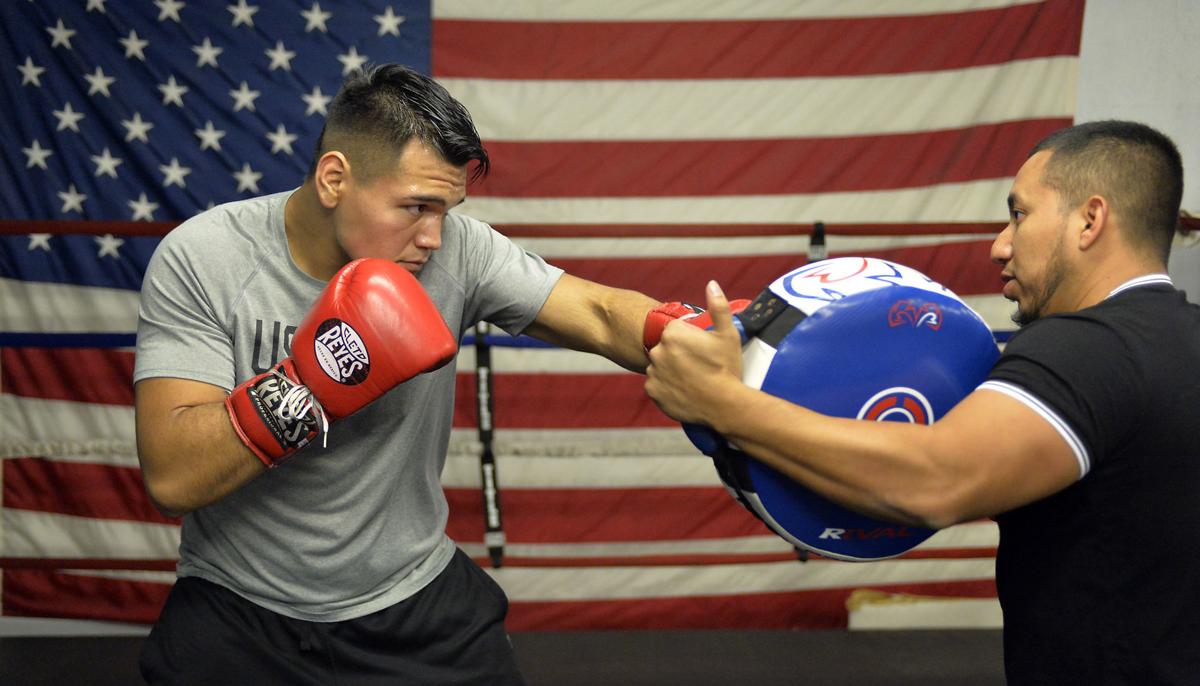 Luis Alvarado, left, trains with his coach Carlos Aguilar, for a shot at qualifying for the U.S. Olympic team as a boxer in the super heavyweight class. Alvarado works out at the Tenacious Boxing Club in Kenosha. 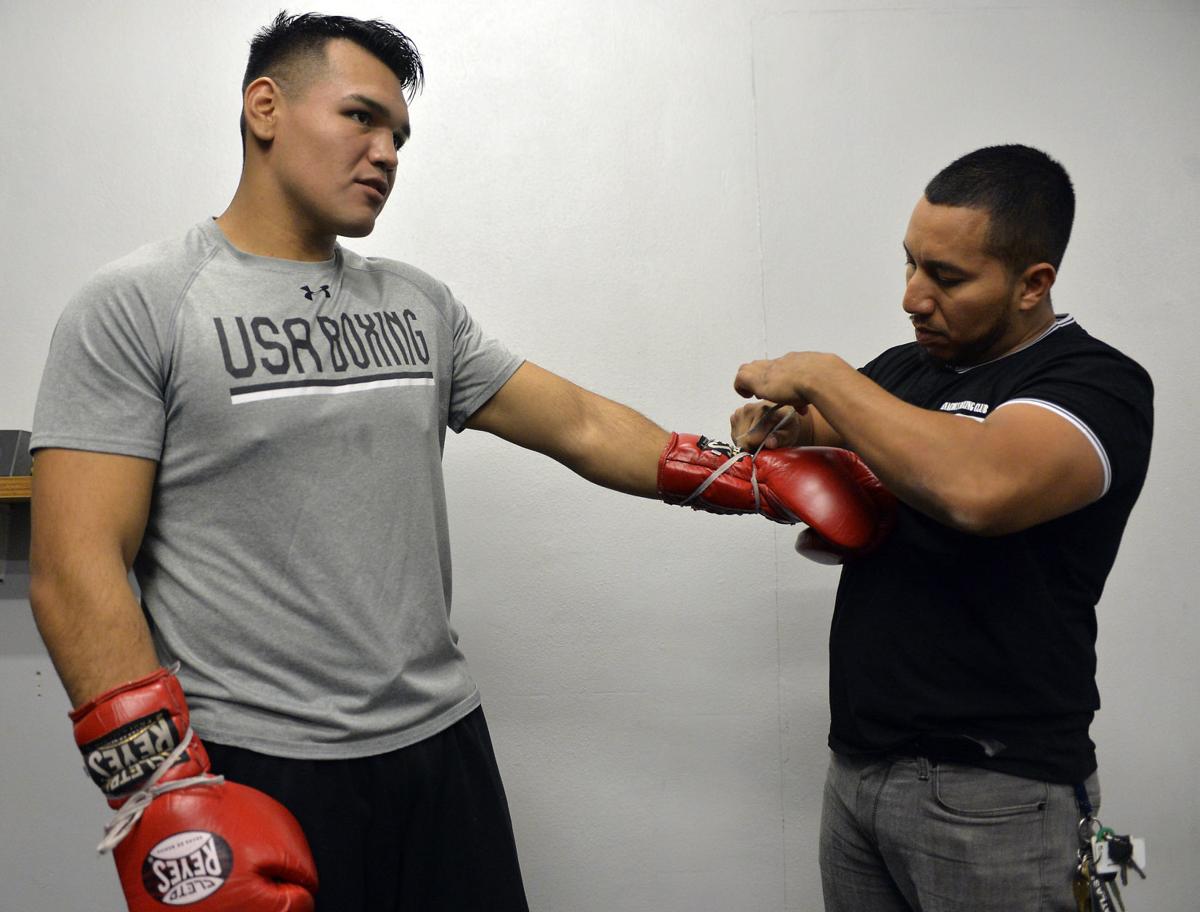 Luis Alvarado, left, gets a hand putting on his gloves from his coach Carlos Aguilar, right. Alvarado is training for a shot at qualifying for the U.S. Olympic team as a boxer in the super heavyweight class. Alvarado works out at the Tenacious Boxing Club in Kenosha.

He was bullied because of his weight. A lot.

And he didn’t have any idea what the future would hold for him.

But that’s certainly all in the past for him now — in just about as big a way as possible.

Alvarado, 20, a 2017 Indian Trail graduate, is one of eight fighters in the nation in the 201-plus (super heavyweight) class with a shot to make the United States Olympic Boxing Team for 2020.

“It’s unbelievable,” he said. “It’s unreal. When we first started, I would get beat up, and I would feel like I wasn’t getting better. When I started getting better, I felt like I hit a plateau. I remember my first fight, losing horribly, and now I’m competing with some of the best in the nation and beating them.

“To qualify is just a dream come true. I honestly never thought I would make it this far. I thought I was good, but I wasn’t that good. Nobody really believes in themselves to that extent. That’s part of being humble.”

Alvarado’s coach, Carlos Aguilar, said he couldn’t have envisioned the type of future for his student that has played out when the two met at Go The Distance Fitness in Kenosha.

But what he did see immediately was a desire in his young pupil to do whatever it took to succeed.

“One day, this big kid walks in, baby faced, at that time I think he was 16 years old, and he wanted to box,” Aguilar said. “We started training, and he was a really ambitious kid. He was always asking questions. He was the first one there, always the last one to leave.

“We really didn’t pay him too much attention because he was just goofing around. He started sparring. Everybody beat him up. The girls beat him up. He would bleed all over the ring, (but) he just continued and continued.”

The two, along with another coach, Joel Ramos, and a slew of other pupils now train out of the Tenacious Boxing Club, 3309 60th St., Kenosha.

Those tough days in the ring continued, until finally one day it became Alvarado’s turn to take the fight to his opponents.

And when that happened, the wins started to pile up.

“(At) 16 years old, he was beating up grown men,” Aguilar said. “He always had that never-quitting, never-stopping, always-going attitude. No matter what his obstacle was, he would keep going.”

While some may have a natural skill for the sport or endeavor they choose, Aguilar said that certainly wasn’t the case with Alvarado.

In fact, there was very little that came naturally to him — it all went back to his desire to make a huge change in his life.

“The thing that he had that most people don’t have is just a will to never give up,” Aguilar said. “If you hit him one time, he wants to hit you three or four times. His will never to give up was just beyond anybody I had met.”

Alvarado, who now checks in at a trim and athletic 205 pounds, said he once tipped the scales at 305.

A trip to the doctor’s office with a concerned mother eventually began to show him that something had to be done. But he admitted at first, he clearly was in denial that his weight was even an issue.

But a stark difference in the coloring of his neck from the rest of the body was a sign that something bad medically — specifically that he was at risk of diabetes — could be coming quickly, Alvarado said.

“When I saw my mom crying, that’s when it really happened (that he knew he had to make a change),” he said. “No mother or father wants to hear that their son isn’t going to live to be 30, because that’s what the doctor said. The way I was growing was a lot. It was like 20 pounds a month. When I hit 305 (pounds), I was like, ‘Wow, I have to stop.’”

And it wasn’t just a medical scare that was affecting Alvarado.

It was his life at school, which wasn’t fun.

“(Being bullied) really does suck,” he said. “There was a point in time when I was really huge. People would be like, ‘You don’t want to mess with him, he’s going to punch a hole through you,’ but others would say, ‘He’s not big, he’s a squishy guy.’ They would grab a pencil, poke me, let go of the pencil and it would bounce back.

“All my life, I dealt with it, just because I was a heavier guy. It was difficult, but I learned how to deal with it. ... It was nonstop, people ridiculing me for the same things. I got fed up with it. I was like, ‘What are you going to do, call me fat? Tell me something I don’t know.’”

Alvarado said he started to become interested in what boxing could do for him when he visited friends one day and saw a number of medals on display.

He learned those were for success in gymnastics, swimming and other activities his friends excelled in, but that he knew weren’t for him.

Finding boxing gave him that chance to not only begin shedding the weight that had long burdened him, but also to grab a medal or two of his own.

And now he’s on the verge of something so big, it’s hard to put into words.

“(Making the Olympics) is way out there,” Alvarado said. “Everyone has a dream.

“I had my dream of making the team and representing my country. I’m already representing Kenosha and Wisconsin, but representing the whole United States? That’s an honor, a blessing, a privilege. That’s a lot of pressure, but it’s a good pressure, that’s for sure.”

Nothing will come easy from here — but that’s to be expected, as his next tournament is for an Olympic berth — but Aguilar said Alvarado has just a good a chance as any of the other seven fighters in his weight class to earn one of the coveted spots on the team.

While the 5-foot-10 Alvarado has some physical obstacles, the rest of the field has to figure out how to attack him, too.

“The biggest obstacle is his size,” Aguilar said. “He’s definitely on the smaller end of super heavyweight. But it’s his style that makes him so dangerous to those people because he’s elusive. He’s moving and always throwing. He has a gas tank for days. He never gets tired.

“Speed, strength and elusiveness have really made it hard for these top guys with over 100 fights who have been boxing since they were little kids, and they can’t handle him.”

And if this run at the Olympics doesn’t work out?

For a kid who has overcome so much, it will just be a small bump in the road.

“This is just the beginning,” Aguilar said. “Even promoters now are contacting him. He has the opportunity.”

And that’s all he ever wanted.

The connection that 2017 Indian Trail graduate Luis Alvarado has made with his boxing coaches doesn’t take long to figure out.

Luis Alvarado is training for a shot at qualifying for the U.S. Olympic team as a boxer in the super heavyweight class. Alvarado works out at the Tenacious Boxing Club in Kenosha.

Luis Alvarado, left, trains with his coach Carlos Aguilar, for a shot at qualifying for the U.S. Olympic team as a boxer in the super heavyweight class. Alvarado works out at the Tenacious Boxing Club in Kenosha.

Luis Alvarado, left, gets a hand putting on his gloves from his coach Carlos Aguilar, right. Alvarado is training for a shot at qualifying for the U.S. Olympic team as a boxer in the super heavyweight class. Alvarado works out at the Tenacious Boxing Club in Kenosha.