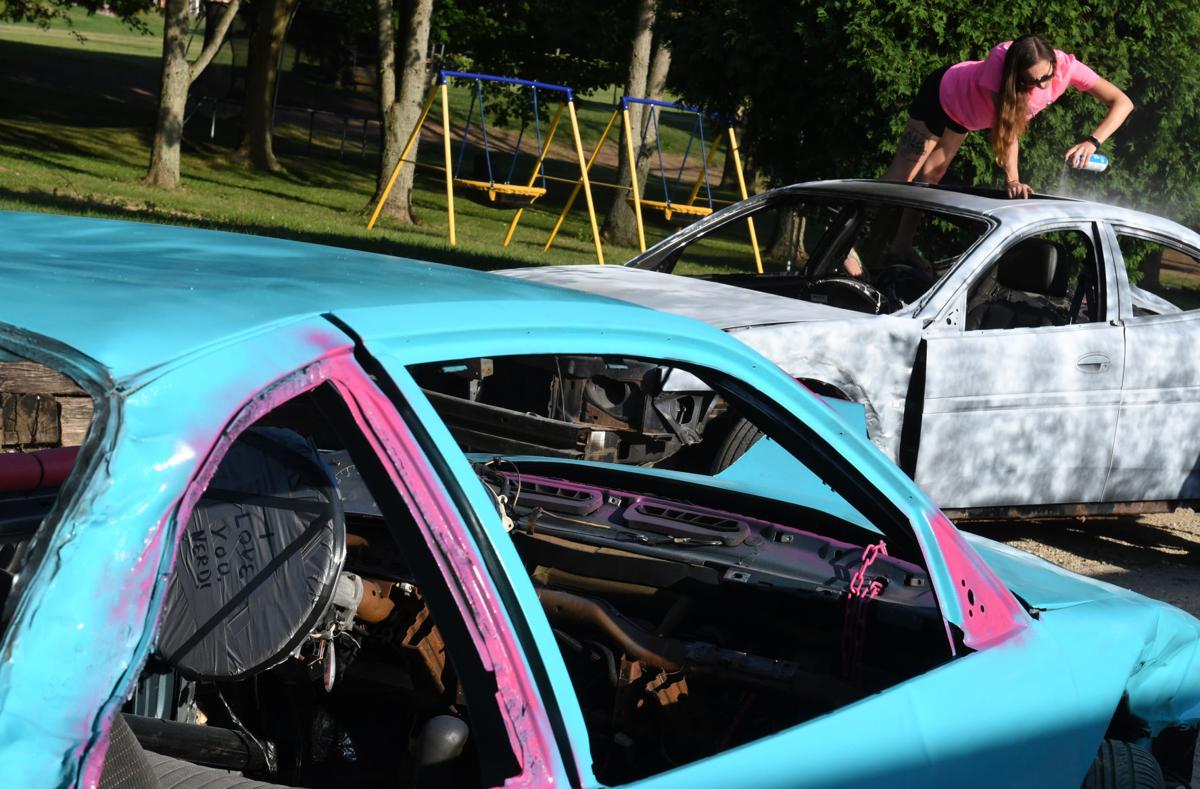 Morgan Eichhorn leans on top of one of four vehicles being prepared for the county fair demolition derby. A more complete vehicle is in the foreground. 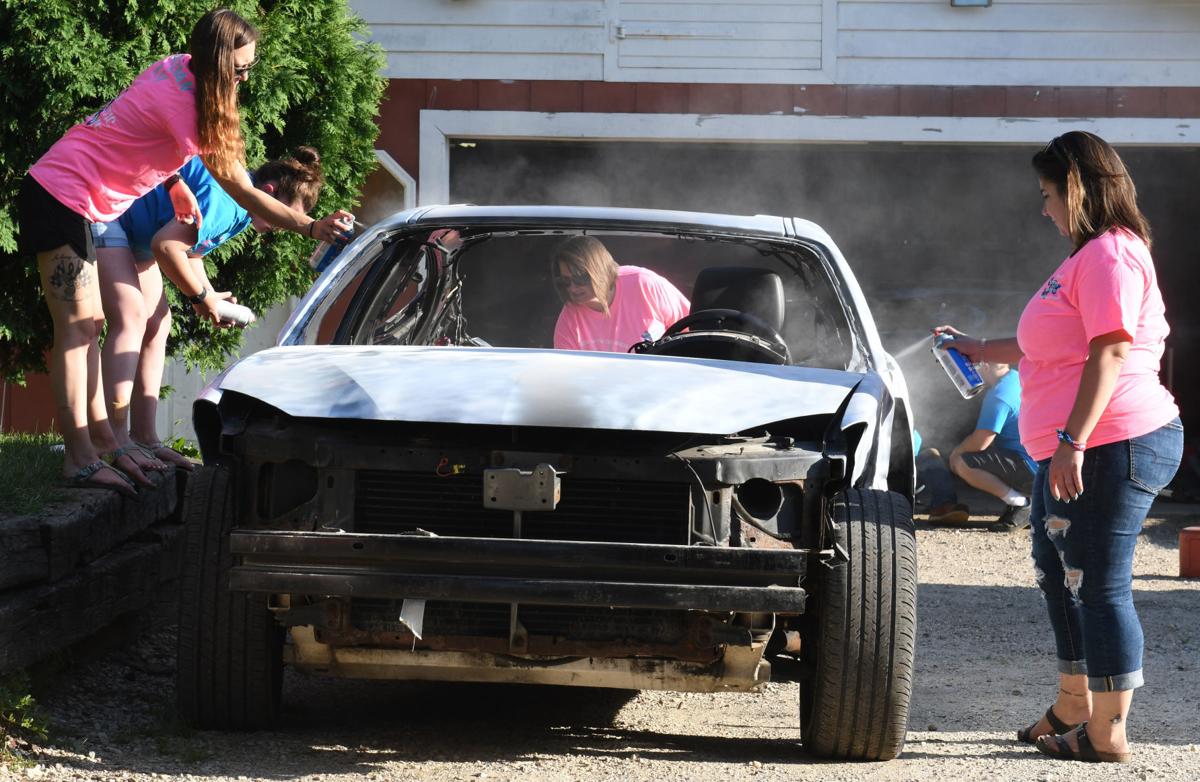 WILMOT — Two words that don’t often come to mind when people think of demolition derbies are “teal” and “pink.”

However, these two colors will be on full display at the Kenosha County Fair on Sunday thanks to the efforts of Kenosha residents who want to keep the memory of Kaylie Juga alive.

Four demolition derby cars will be decked out in support for Kaylie, who died in May, and her family. Pink and teal were Kaylie’s favorite colors.

The cars will be decorated in purple ribbons for domestic violence awareness and will be painted with messages — some saying, “Dancing with the angels” or “We wreck in loving memory of Kaylie Juga.”

Cindy Eichhorn, a friend of the Juga family who helped organize the idea, said the event was planned to honor Kaylie’s life.

“We want to let them know that they’re (the Jugas) are not alone in this,” she said. “There are so many people who support them and love them and are grieving with them as well.”

The Eichhorn family started participating in demolition derbies three years ago. When they thought of how they could raise awareness and community support for the Jugas, participation in a demolition derby seemed like a natural fit.

The Eichhorns had one demo car dedicated to Kaylie in the Racine County Fair but are ramping their efforts up to four cars on Sunday.

Mason Eichhorn will be participating in the derby, which he describes as “adult bumper cars,” on Sunday. He met Kaylie after becoming close friends with her brother. Mason said Kaylie was “like a sister” to him.

“We just want to make sure no one forgets about her,” Mason said.

A Facebook group called “We wreck in loving memory of Kaylie Juga” was started by friends of the Jugas to gain momentum with the idea.

The group, which is comprised of close friends of the Jugas, is asking those coming to the derby to wear their pink “Kaylie Strong” shirts to show support. The group will also be at the pit area entrance at 11 a.m. for those interested in taking a picture with the crew to show support.

The Juga family is in total support of the idea. Kaylie’s brother Tyler even helped design a car and will be participating in the derby himself.

The group is also hoping awareness regarding the negative affects of domestic violence rises from the event.

“If something doesn’t look right, speak up and say something to someone,” Eichhorn warns.

Eichhorn, who knew Kaylie well, said as long as her family participates in demolition derbies the cars will be dedicated to Kaylie in some way.

“She loved to have fun … she was wild and beautiful. And for us, we love derbies,” she said.

The demolition derby begins at 1 p.m. Sunday at the Kenosha County Fairgrounds, 30820 111th St., in Wilmot.

You can learn more about how to support the event through the “We wreck in loving memory of Kaylie Juga” Facebook group at www.facebook.com/JugaStrong/.

Here are the stories and photos published online and in the print product of the Kenosha News during the 2019 Kenosha County Fair.

Morgan Eichhorn leans on top of one of four vehicles being prepared for the county fair demolition derby. A more complete vehicle is in the foreground.