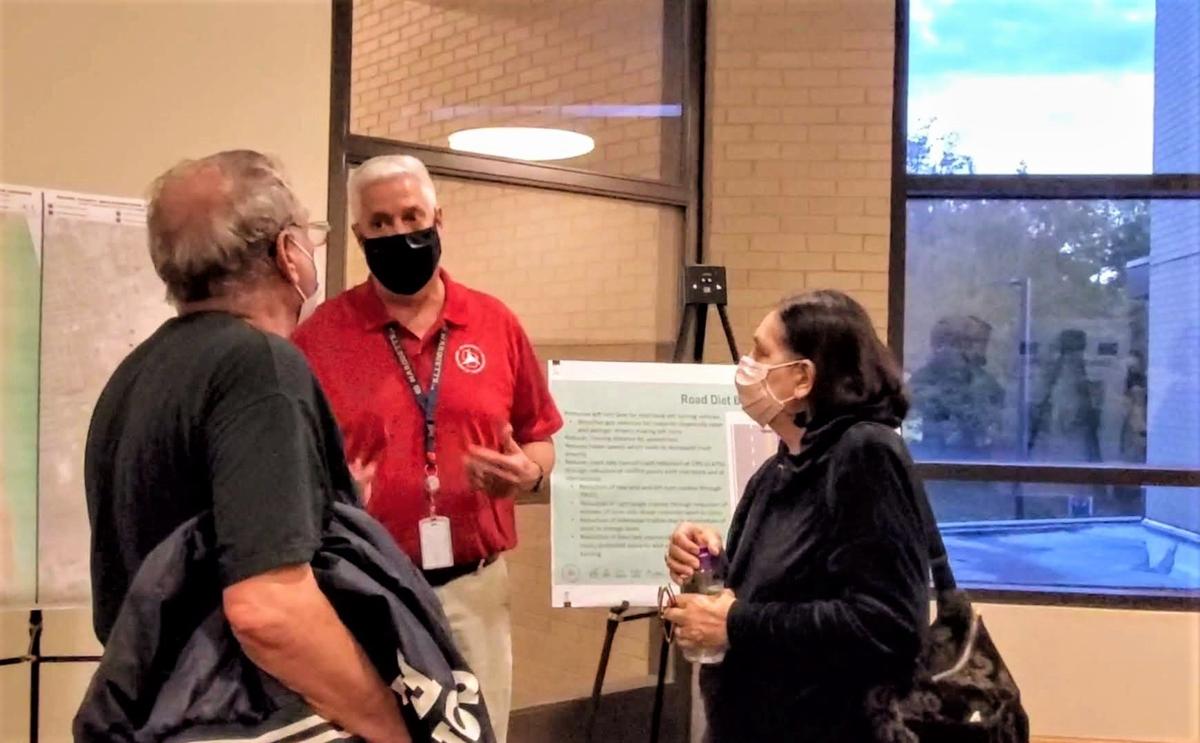 Rell and Sandy Barrett of Somers speak with Roy Stollenwerk, center, project manager for the Wisconsin Department of Transportation overseeing the Sheridan Road (Highway 32) reconstruction at Wednesday night’s public involvement session held at Carthage College. The project is scheduled to begin in 2025. 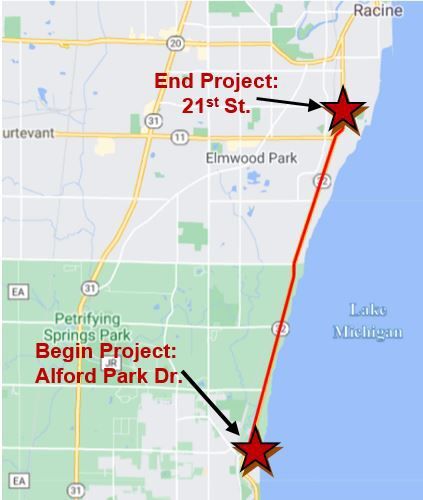 Sheridan Road is slated for reconstruction in 2025. 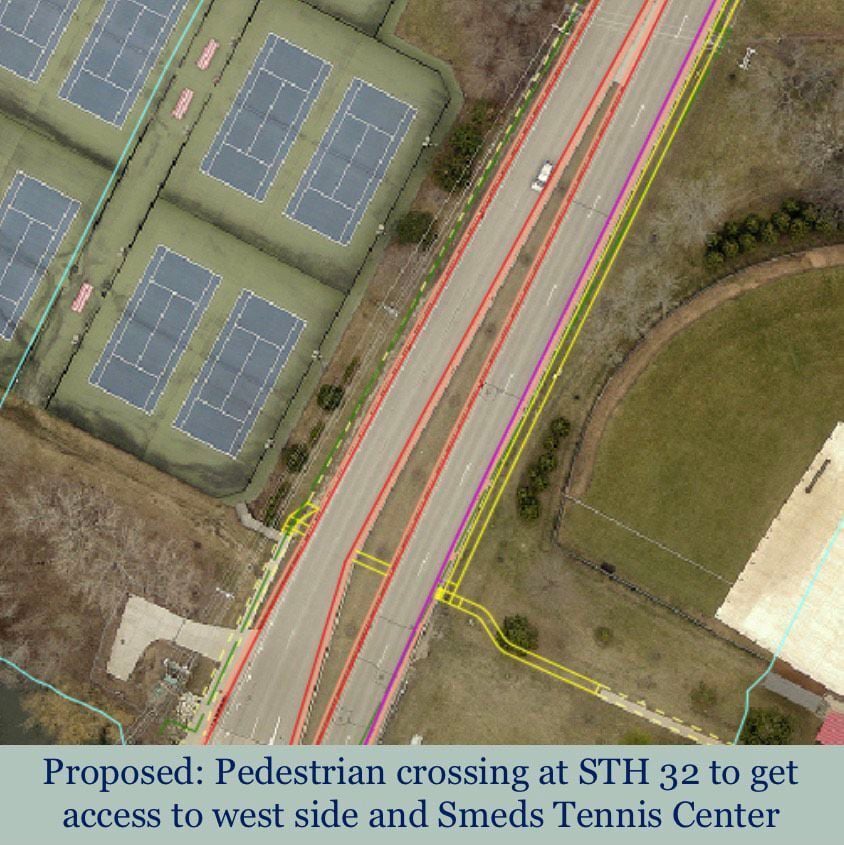 A sidewalk extension and pedestrian crossing are among the ideas being explored as part of the Sheridan Road reconstruction planning as a way to improve pedestrian safety.

Residents received an initial look Wednesday night at plans for a 5.5-mile stretch of Sheridan Road (Highway 32) from Kenosha to Racine that would be reconstructed with options that, in addition to planned resurfacing, could include pedestrian walkways and bike paths.

The informal public meeting held at Carthage College’s Campbell Student Union Auditorium was a chance for people to ask questions of Wisconsin Department of Transportation representatives in charge of project design. It was also an opportunity for the public to weigh in on whether it wants the configuration of the road, currently, four lanes — two lanes on each side — to change.

Over a two-hour period, about 50 people at various times attended the session, according to Roy Stollenwerk, project manager. He explained the three options being considered by the state DOT for rebuilding the road from Alford Park Drive in Kenosha to 21st Street in Racine. They include:

Milling out the existing asphalt on the road, replacing it with new asphalt and leveling it, leaving intact Sheridan Road as a four-lane state highway

Consolidating the four lanes, reducing them to three. Under this configuration, the highway would have one lane in each direction (north and south) with a third lane in the center used for two-way turning. This option would allow for bike lane accommodation on either side of the road.

An option similar to the second, but with bike paths and pedestrian walkways.

“That’s a very high number on the roadway,” he said.

The second and third options, like the first, would include leveling and resurfacing the road with new asphalt. Transportation officials are looking at the possibility of installing sidewalks between Alford Park Drive to Kenosha Highway A (Seventh Street), which would go through Somers.

During a meeting last month in Somers, local leaders, including Village President George Stoner, had expressed concerns over sidewalks on the east side of Sheridan Road from Carthage to Highway E and on the west side of the road from Highways E to A. Among them, according to the village president, was the lack of public support from residents for the sidewalk option because of they would have to foot 20 percent of the cost and be required to maintain the path.

Stollenwerk said comments from the public during the information session were mixed.

“There were some people who were very concerned about the pedestrians and bicyclists. They want us to have a way to not place them on the roadway,” he said. “We’ve had some people who want to keep it exactly the way it is.”

He said some have asked that planners consider a pedestrian bridge.

“That’s not going to work at all,” he said. “You need to have a bridge high enough to get trucks under it. And, because of ADA (Americans with Disabilities Act) standards for a wheelchair, you can only have up to an 8 percent grade to get up to that, so you’d have to have such a ramp so long to get high enough to get it over that you’d have this really large structure and it would cost a ton of money.”

Rell and Sandy Barrett, of Somers, attended the public information session and stayed for nearly an hour, asking questions of Stollenwerk, examining the configurations and later filling out the suggestion form.

“We’re firmly opposed to changing. Keep it as it is. Don’t fix it,” said Rell.

Sandy said she was fine with the current configuration, too, but reminded him they weren’t completely averse to adding a sidewalk on the east side of the road up to Highway E.

“It should’ve had a sidewalk or bike lanes when they re-did it before but they never did it,” she said.”They’ve said there’s pedestrians being killed. Well, the Carthage kids are walking up and down the streets every weekend. They live in the neighborhood and there’s no place for them to walk. It’s dangerous, so a sidewalk would eliminate them walking on the road.”

She said she preferred a sidewalk over a bike path.

Stollenwerk said the Wednesday night session was the first of two the transportation department has planned. The next session is expected to be scheduled later in 2022 before the project moves forward with “the preferred design,” by the end of next year, he said.

PLEASANT PRAIRIE — Voters in the village will decide this spring on a $1.6 million referendum that asks them whether the municipality should b…

Here's a roundup of what's going on nationwide and in Wisconsin with masks and COVID-19 tests.

Baldwin, other Democrats back $5B proposal to send an N95 mask to every American

U.S. Sen. Tammy Baldwin, D-Wis., is among more than 50 Democrats to back a proposal that would send an N95 mask to every American.

The intra-county battle is on. Both Democrats and Republicans in the Wisconsin Assembly are led by Racine County natives.

Spring election has largest field of candidates in a decade; County Executive among contested races

A Kenosha County Board Supervisor has resigned from his position.

On the one-year anniversary of the events of Jan. 6, 2021, local and state politicians reflected on the aftermath and what it means for Americ…

"Unquestionably the threat level has really gone up on Capitol Hill. The daily threats that are still coming in, threats to members lives is still there," Kind said.

Rell and Sandy Barrett of Somers speak with Roy Stollenwerk, center, project manager for the Wisconsin Department of Transportation overseeing the Sheridan Road (Highway 32) reconstruction at Wednesday night’s public involvement session held at Carthage College. The project is scheduled to begin in 2025.

Sheridan Road is slated for reconstruction in 2025.

A sidewalk extension and pedestrian crossing are among the ideas being explored as part of the Sheridan Road reconstruction planning as a way to improve pedestrian safety.