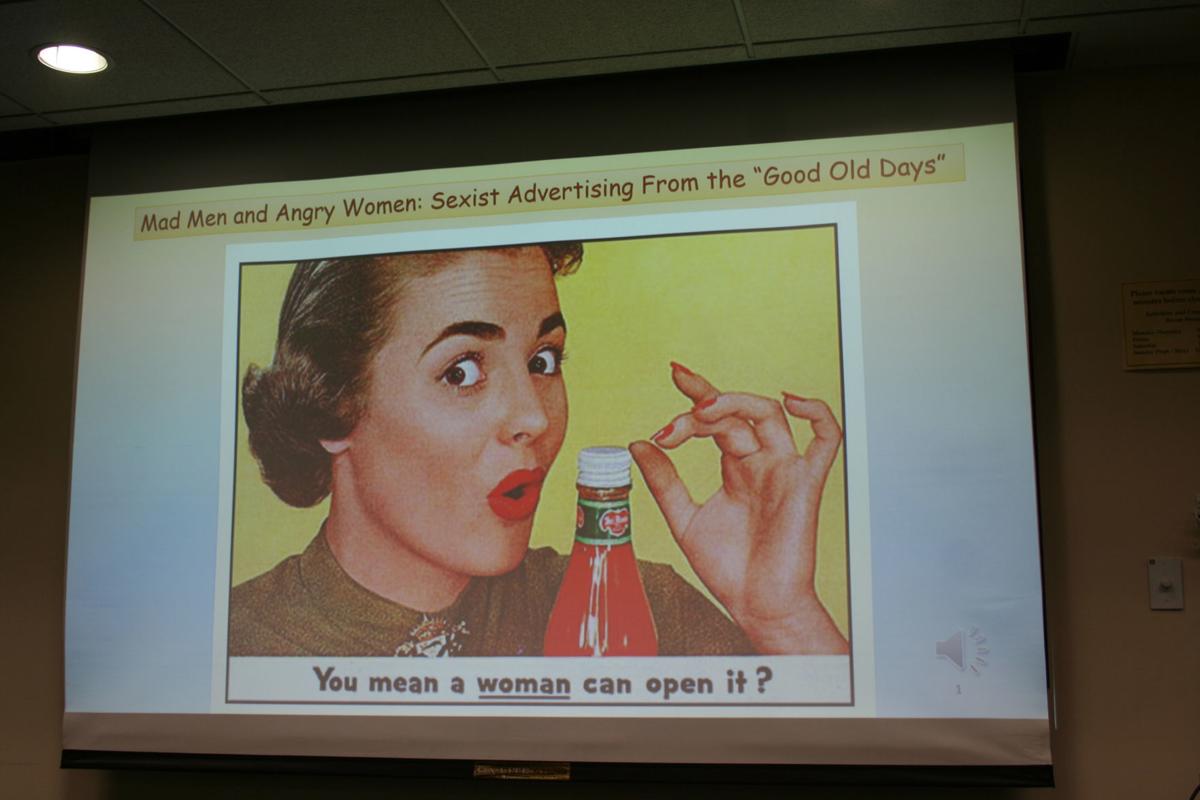 This ad for ketchup belittles a woman’s ability to open a bottle. 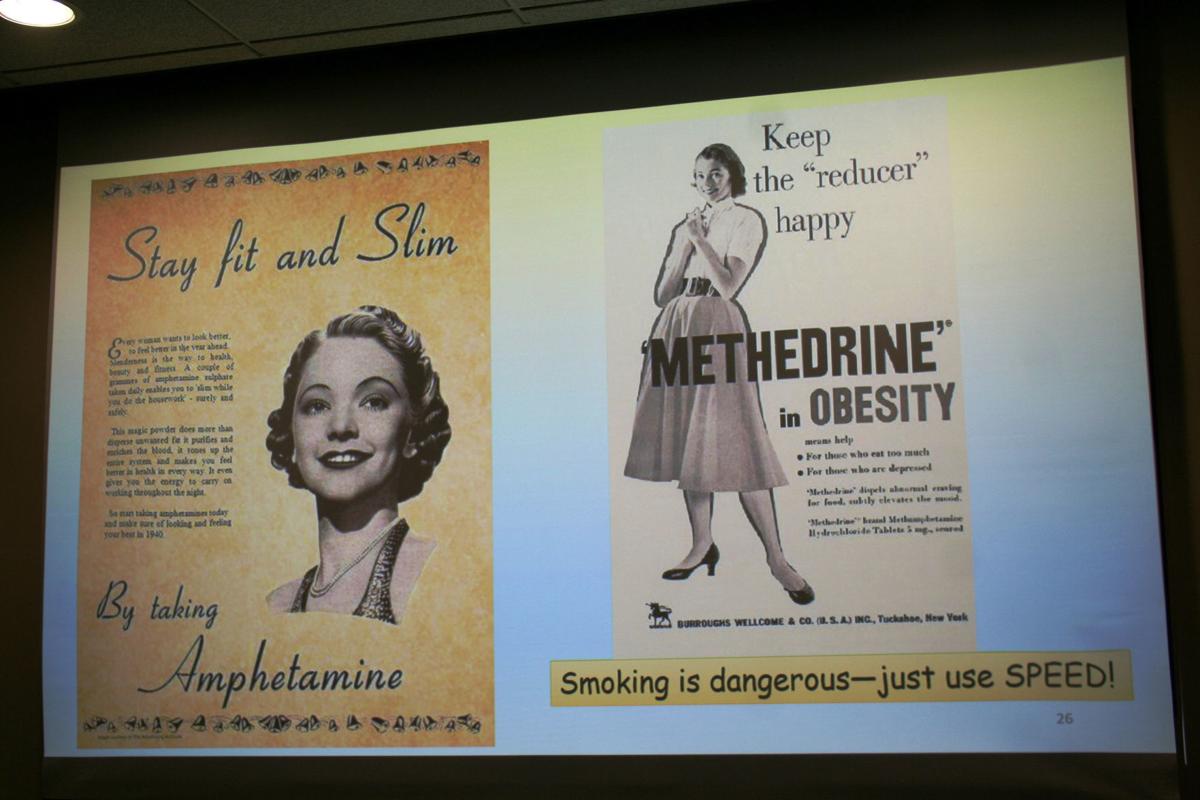 These ads encourage women to stay thin by taking drugs. 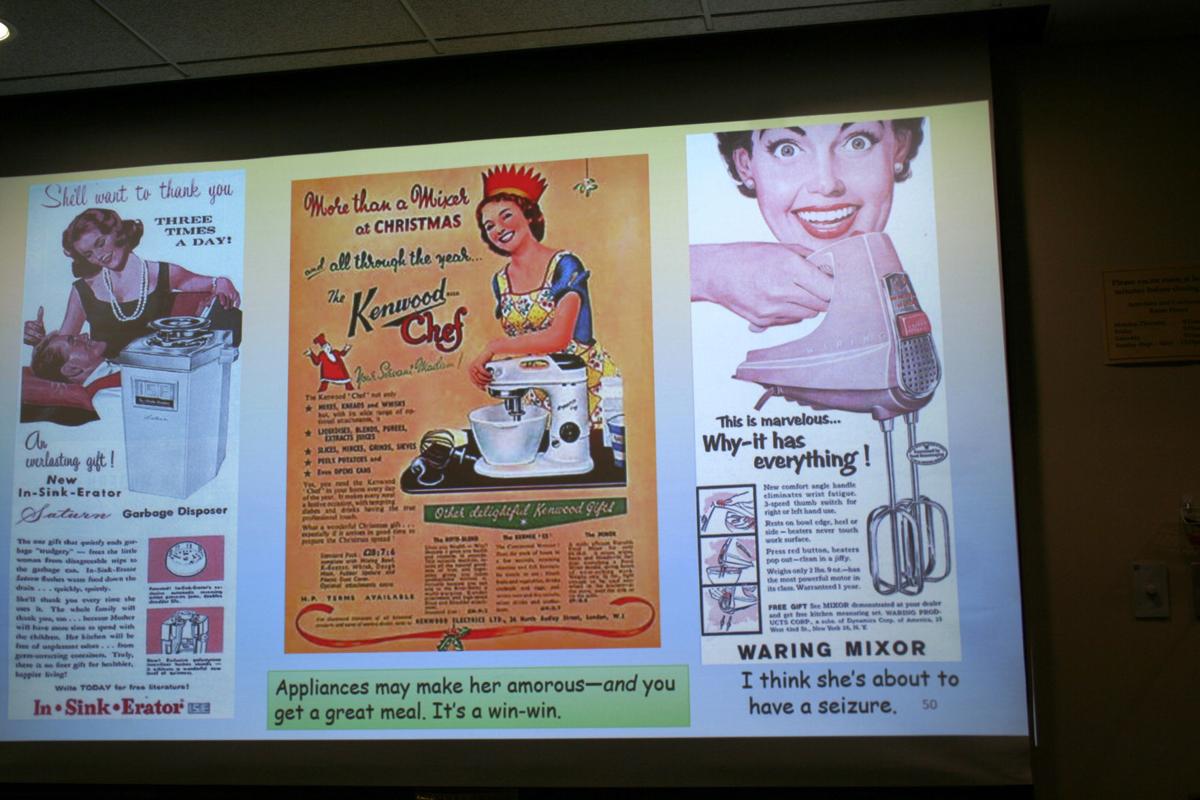 These ads push the notion that a women love their appliances.

From Del Monte ketchup’s claim that the bottle is easy enough a “woman” can open it, to the “ditzy” secretary asking, “You mean this is a computer?”, ads from the “good old days” had plenty to say about women’s roles, the home and family life.

And that was just the surface of what was presented as “real life” to American families in the 1950s through the ’70s, according to historian Cathy Polovina. This was her latest Old Weird America program, “‘Mad Men’ and Angry Women: Sexist Ads from the ‘Good Old Days,’” held at the Northside Library Thursday.

“Some younger people might be shocked at the assumptions seen in these ads,” Polovina said. “Even for those of us who were around for some of those times, this will probably be a little ‘cringy’ on how it used to be, and how some stereotypes haven’t changed as much as some hoped. Even in the ’70s, you got the hip, feminist girl with the Eureka (vacuum) and the shag rug.”

Looked at from a 21st century perspective, the ads did raise eyebrows and got some laughter from viewers in the packed room. With the end of World War II and the GI Bill, families could achieve that American dream of home ownership, better jobs and achieve a higher standard of living. The ads showed what everyone could now have.

“This was the first time in modern history that people were considered solid middle class,” Polovina said. “Seventy percent of U.S. households were living on a single income. Fifty percent owned their own home and more owned a car. The ads were lily white, but African-American families also achieved more.”

Consumerism was at its height, with 1950s ads showing the “little woman” how to fulfill her life and make a happy home for her husband with all kinds of must-have gadgets and appliances.

Kenoshan Michael Thompson looked at them from the male perspective. The idea was “the woman’s place was in the home,” he said.

Ads and TV promoted the idea of making that perfect home and family.

“I remember as a little girl playing with my dollhouse. and ‘Father Knows Best’ was the perfect family,” said Kathy Basquez. “As good as my family was, we fell short of the TV.”

“That’s what they stuck in your head, too,” said Chrystal Hart. “You were supposed to have babies.”

Those ads also played on women’s self-image and self-doubt. A woman wasn’t perfect unless she made that perfect cup of coffee for her man — Folger’s. “Nerve” tablets helped you lose weight or keep your job.

“Of course, there was the tried-and-true weight loss method: smoking,” Polovina added. “We can do an entire program on cigarettes since the 1920s. They were sold that ‘smoking makes you the cool girl.’ Marlboro was as much marketed to women as a ‘light’ smoke.”

Sex appeal also was big, especially in selling clothing or cars or even food. Heinz Ketchup had the headline “Man Bait!”

Consider the early 1960s Xerox machine commercial where the secretary says, “I can’t type. I can’t file. Sometimes my boss asks which is the original and I don’t know.”

Another ad proclaims: “Girls You Can Be Something. Doctors. Lawyers. Executives. Secretaries.”

“Of course, secretary was the glam job of the age,” Polovina said.

PLEASANT PRAIRIE — A new roundabout soon will be coming to a village street near you.

An effort to ease parking woes along Kenosha’s lakefront, especially at Simmons Island, appears to be working. Thanks to a creative solution, …

Man gets lifetime ban from driving, prison time for latest in series of OWI convictions

At his sentencing this week, the judge told Michael Hess it did not appear that he was able to learn from his mistakes.

This ad for ketchup belittles a woman’s ability to open a bottle.

These ads encourage women to stay thin by taking drugs.

These ads push the notion that a women love their appliances.