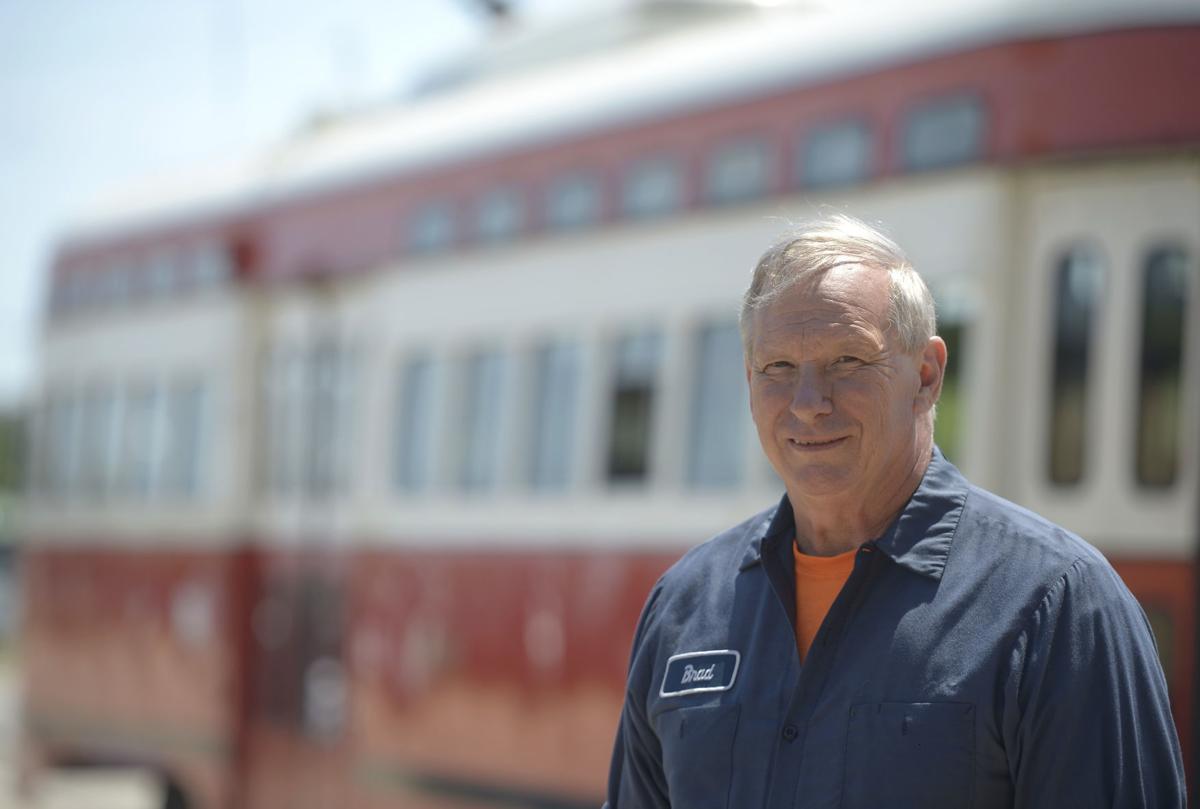 Brad Preston is retiring from his position as Kenosha’s streetcar mechanic, but he’s not leaving behind his love for the electric cars. 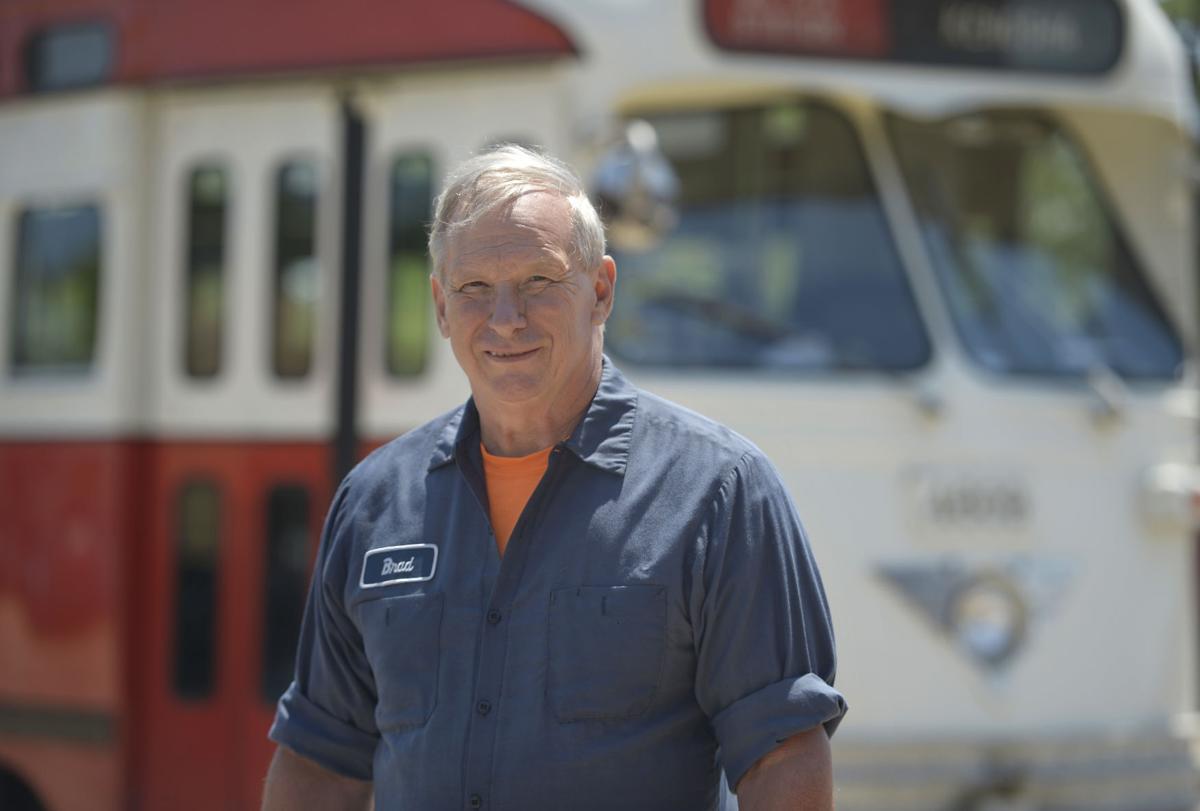 Brad Preston, who retired in June of 2020 from his position as Kenosha’s streetcar mechanic, will be on hand during Streetcar Day on Sept. 18. The free event celebrates Kenosha's historic electric streetcars. 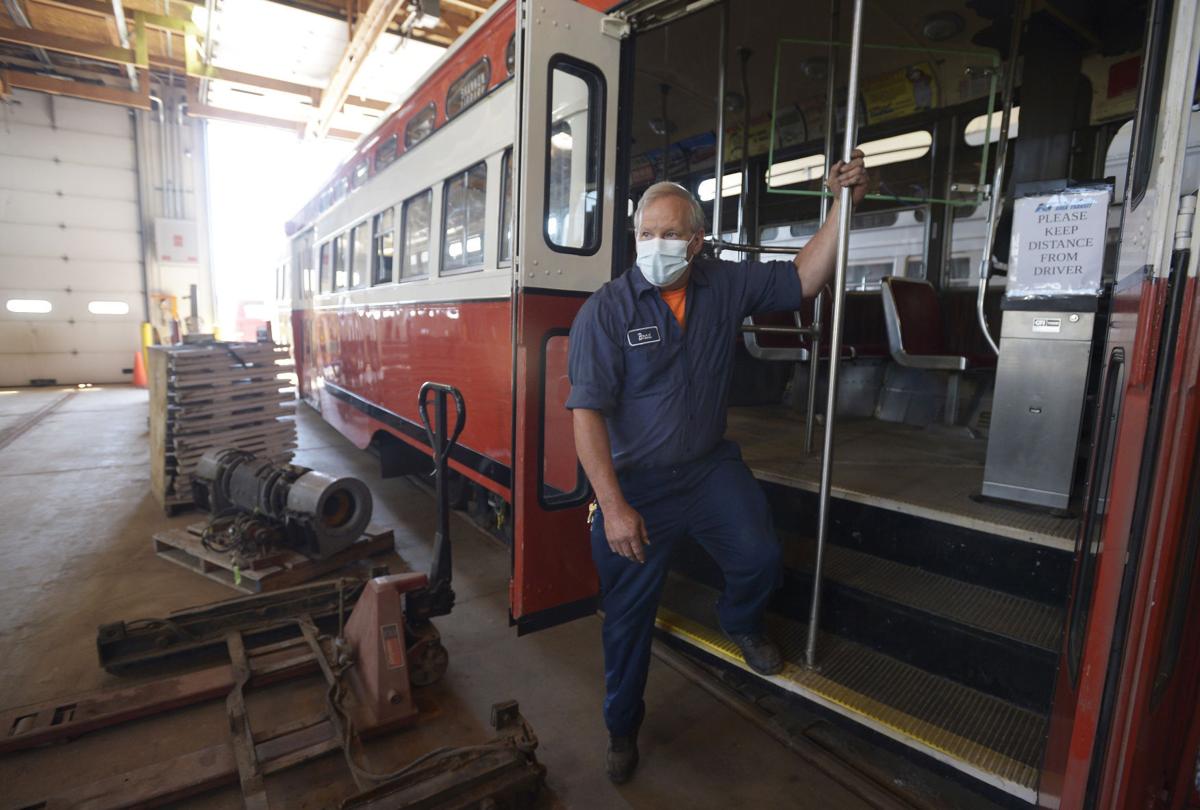 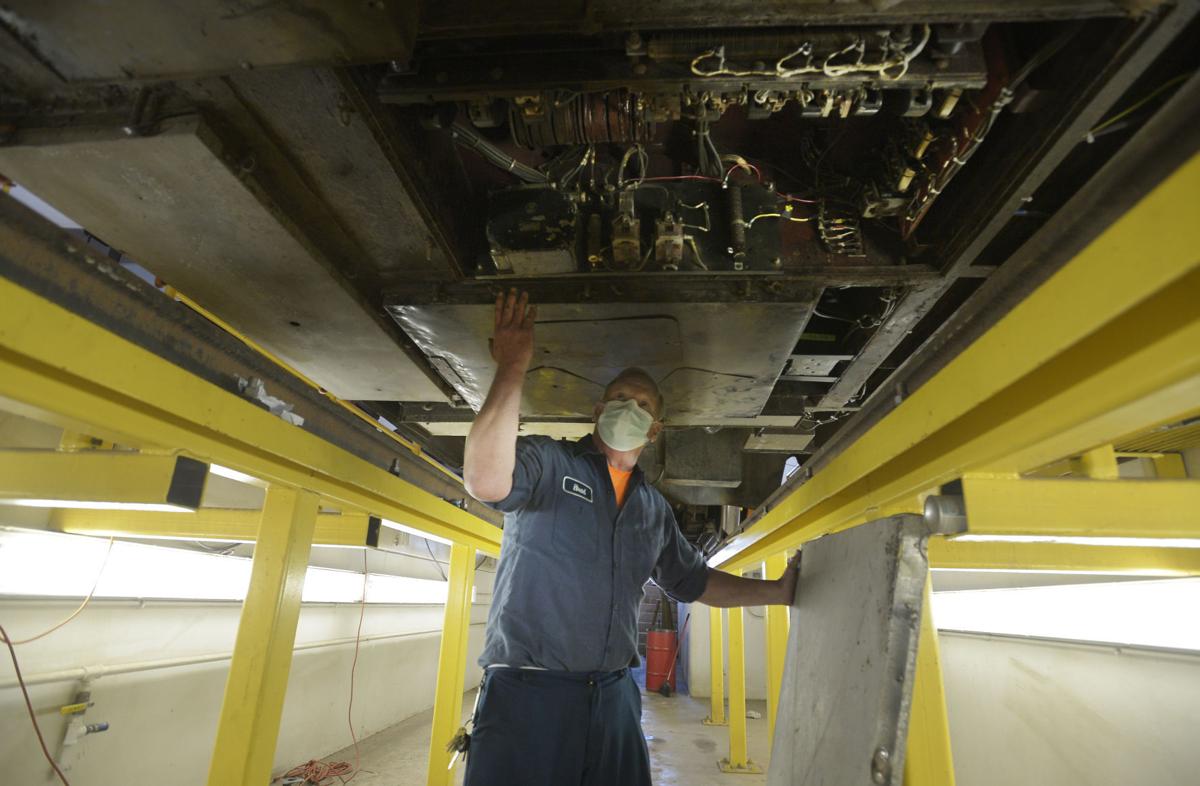 Brad Preston walks in “the pit,” going underneath a streetcar in the “streetcar barn.” “It’s great to have this setup,” he said. “It makes it so much easier to work on the streetcars.” Preston, who retired in June of 2020 from his position as Kenosha’s streetcar mechanic, will be on hand during Streetcar Day on Sept. 18. 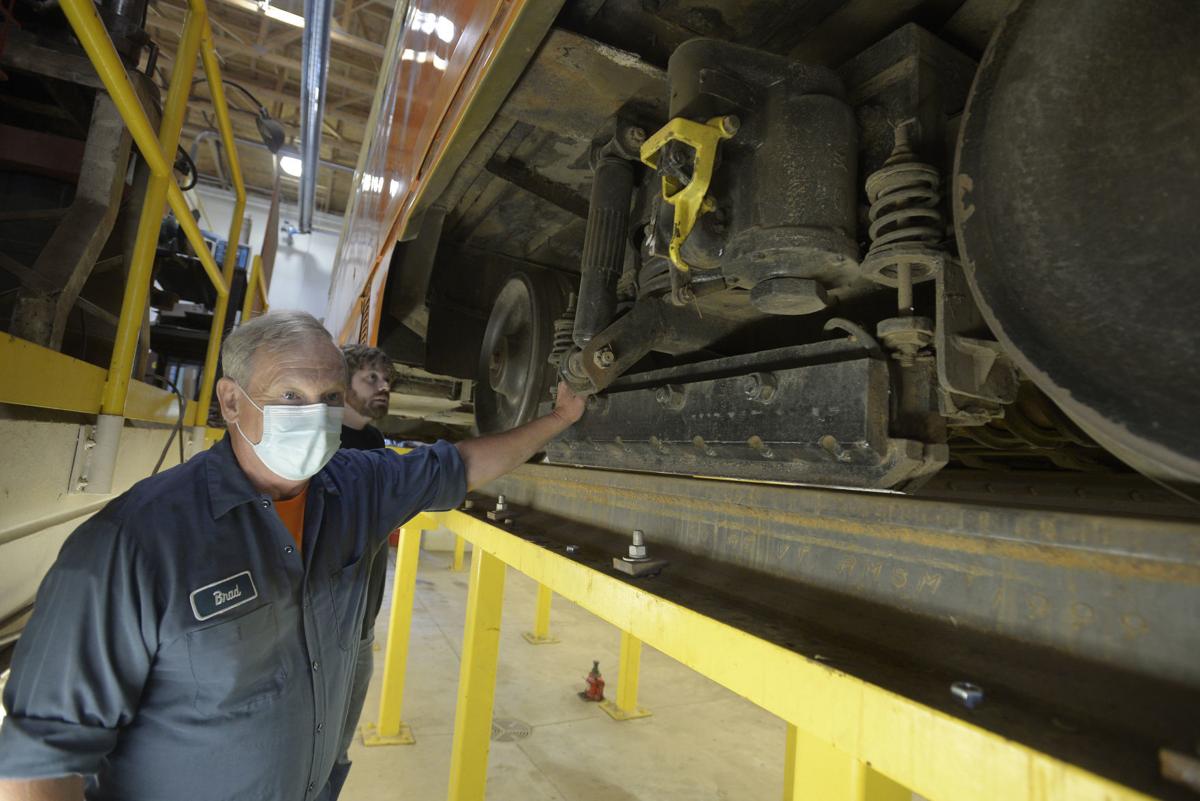 Brad Preston, seen standing in “the pit,” said having that setup in the “streetcar barn” allows him “to get alongside the components” and work on the streetcars.

The streetcar barn — aka the Joseph McCarthy Transit Center in downtown Kenosha — is going to seem a little emptier when Brad Preston retires.

He’s been the streetcar technician and grand pooh-bah for more than a decade.

And he’s loved every minute of it.

“This has been a dream job. It’s just fabulous,” he said when we talked inside the streetcar barn. “I’ve met people from all over the world and talked to people in other cities about their streetcars. It’s a small group that operates streetcars, so we all know each other.”

It’s probably not a shock to discover that new streetcar parts are not readily available.

That means Preston has had to improvise, which he relishes.

“We’ve had to horse trade for parts with other cities that have streetcars,” he said, “and we come up with our own parts, too. We find a bus part that’s close to what we need, weld it and make it work.”

He points out a water tank on the back of a streetcar that he calls “a Kenosha invention” now used on streetcars everywhere. The misting from the water tank mimics the effects of a rainy day to keep the wheels wet and minimize the “squeak” noise when the streetcar turns a corner.

“I love that type of challenge,” said Preston, who added that “as a mechanic, you learn something new every day. You’re always getting creative.”

He’s hoping the streetcars will be operating again soon after being stopped during the COVID-19 shutdown. During this downtime, “we’re done here doing maintenance and other projects. Everyone asks us when the streetcars will be running again. We’re working to get back to normal, but the target date is above my pay grade.” (City officials are aiming for Aug. 1 to get the streetcars rolling again.)

During this shutdown, he said, “It’s been really tough because we haven’t been able to have visitors here. This whole operation was done to help Kenosha and has become a staple of the community, but we had to hit the pause button this year.”

‘A labor of love’

The biggest issue in keeping Kenosha’s streetcars operating “is the TLC each car needs,” Preston said. “There’s always something to do, but it’s been a labor of love. These aren’t ‘hangar queens’ that sit inside and look good; these streetcars are out in the elements, putting on miles and are all at least 70 years old.” He quickly adds that the 70-year-old vehicles “are built like tanks and perform flawlessly.”

As he prepares to head into retirement, Preston said the thing that’s surprised him the most about his years working with the city’s streetcars is “becoming an ambassador for the city of Kenosha. That’s something I never thought I would be.”

Preston gives streetcar tours and has been interviewed on radio and TV, including the PBS series “Around the Corner with John McGivern” and “Discover Wisconsin.” (He’s also been interviewed numerous times by the Kenosha News, naturally.)

As for the public’s opinion of the streetcars, Preston says, “It depends on who you talk to. Some people grumble that ‘no one rides these things,’ but then you stop and pick up 30 kids.”

Joe LaMothe will be taking over for Preston and is “looking forward to all the challenges in this job. It will be great.”

LaMothe, who’s been a bus mechanic for the city of Kenosha for eight years, shares one very important trait with the man he’s replacing. Both he and Preston say coming to work every day on the streetcar fleet “is not like coming to work at all.”

At home, they’re both busy rebuilding classic vehicles — Preston has a 1967 van, LaMothe is working on a 1971 VW bus — and Preston said “someone asked me once what it’s like to get paid for doing something I’d be doing at home anyway. It’s wonderful.”

Though Preston won’t be the city’s streetcar technician, he’ll still be chairman of the Kenosha Area Streetcar Society and plans to stay active with “that wonderful group of people.”

Born and raised: In Peoria, Ill.

Coming to Kenosha: He moved here in 1983 and "has watched the city's downtown area really change." He originally stopped here to visit his parents, who had moved to Kenosha. "I was going to loaf around for the summer, but then I saw an ad for a mechanic at Hartnell Chevrolet. I loved working there, but I had worked on buses before coming here, so when the city had an opening, that job was a better fit," he said. "The rest is history."

City career: Preston has worked on the Southport Marina, at the Kenosha Water Utility and as a general fleet mechanic. When the city brought in streetcars, "I really wanted to work on them," he said. "I've always been a rail fan and joke that I got this job because I know steel wheels and rails."

Summing up his years working for Kenosha, he says: "I've had really great jobs with the city and have done a lot of really interesting things. You never know what the day will bring."

Playing favorites: Though Preston is quick to say he really shouldn't have a favorite among the city's streetcars, he has a special place in his heart for 4617, the green-and-white streetcar. He painted it like San Francisco's streetcars, complete with blueprints, decals and paint samples from that city. The 4617 streetcar was donated to Kenosha by John D. DeLamater, a University of Wisconsin professor who loved streetcars.

The city of Kenosha has seven streetcars, which started operating in June of 2000.

Special additions: Kenosha's streetcars "are fabulous cars that appear as they did when they were built for the different cities," said Brad Preston, the longtime streetcar technician. "We added a P.A. system and a wheelchair lift to each streetcar." They've also added Plexiglas "sneeze guard" barriers at the front for operating the streetcars in a COVID-19 world.

Off the road: The streetcars normally run on a two-mile loop that provides views of Lake Michigan, HarborPark, downtown and the Metra train station. Stops include the McCarthy Transit Center, Eighth Avenue and 54th Street. The streetcars have been idle since mid-March due to the COVID-19 pandemic. Plans call for the streetcars to start operating again on or before Aug. 1. Stay tuned.

Kenosha Streetcar Day: The annual celebration is still planned for Sept. 26 and will double as a 20th anniversary celebration for the local streetcars. The free event is hosted by the Kenosha Area Streetcar Society and features public tours of the Joseph McCarthy Transit Center, a giant Lego streetscape and streetcar rides. For more information about the group, go to www.kenoshastreetcarsociety.org

Brad Preston is retiring from his position as Kenosha’s streetcar mechanic, but he’s not leaving behind his love for the electric cars.

Brad Preston, who retired in June of 2020 from his position as Kenosha’s streetcar mechanic, will be on hand during Streetcar Day on Sept. 18. The free event celebrates Kenosha's historic electric streetcars.

Brad Preston walks in “the pit,” going underneath a streetcar in the “streetcar barn.” “It’s great to have this setup,” he said. “It makes it so much easier to work on the streetcars.” Preston, who retired in June of 2020 from his position as Kenosha’s streetcar mechanic, will be on hand during Streetcar Day on Sept. 18.

Brad Preston, seen standing in “the pit,” said having that setup in the “streetcar barn” allows him “to get alongside the components” and work on the streetcars.