This artist’s rendering shows the proposed 16-unit building that would be part of the Strawberry Fields Apartments project.

This artist’s rendering shows the proposed 94-unit building that would be part of the Strawberry Fields Apartments project. 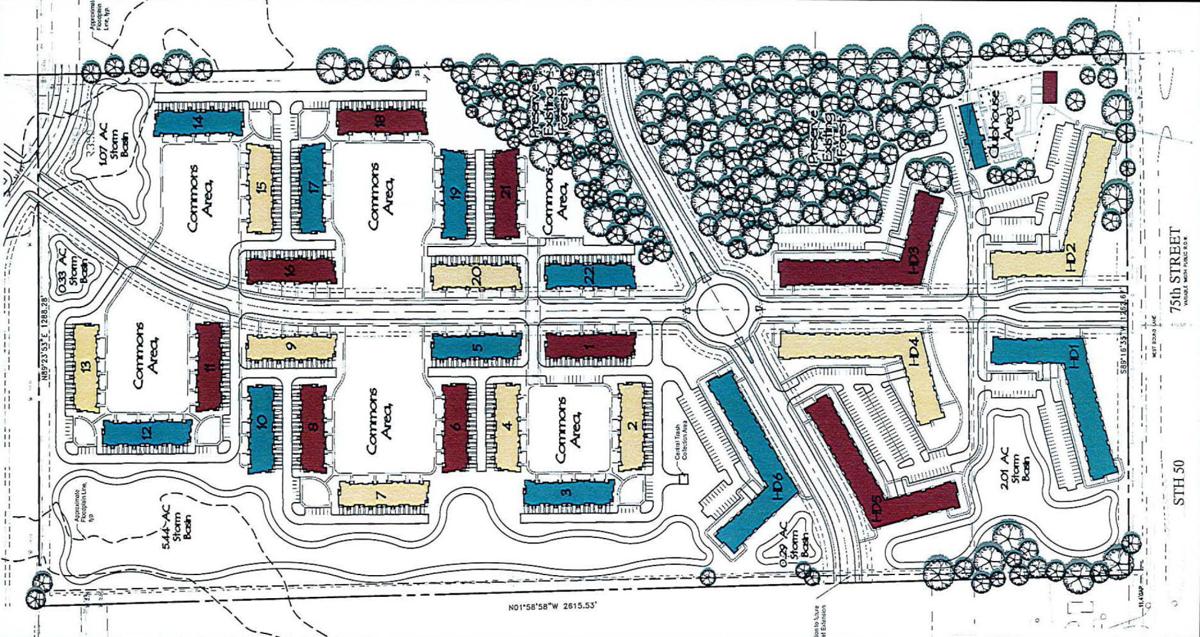 This map shows the proposed site plan for the Strawberry Fields Apartments. Highway 50 is on the right.

An upscale multi-family housing development proposed near the current Thompson Strawberry Farm received a warm response from Kenosha officials as the plans went back under the microscope.

In the last review in December, a number of concerns were raised, including the sheer size of the development.

Thursday’s comb-through was preliminary, and no formal action was taken.

The revised plans have trimmed the number of apartment units — a total of 798, down from the originally proposed 914 — and a mix of different building styles.

Ryan Douglas, president of LandQuest Realty, said the revised plans were incorporated after conferring with city staff and holding a neighborhood meeting in February. LandQuest is working in tandem with Cardinal Capital on the Strawberry Fields project.

“What you have before you is the result of all that input,” Douglas said.

In the latest iteration of plans, project architect Jason Korb also discussed some of the ancillary details associated with the project, including such amenities as a playground, clubhouse, outdoor pool and walking trails.

Korb, who heads the firm Korb and Associates, said other considerations have been made to an adjacent wooded area, which is to be incorporated into the plans.

“The woods are to be largely preserved,” Korb said. “Ninety-nine percent of it will be preserved.”

Ald. Dominic Ruffalo, who represents the district within Strawberry Fields, said he was supportive of the latest sets of plans and praised all of the firms involved in the project for their collaboration.

“They went above and beyond anything I ever asked of them,” Ruffalo said. “They took the time to hear the comments, and they brought the density down. The scope of the project looks good. They’re good people to work with.”

Commissioner Lydia Spottswood said she believed the latest plans were a marked improvement.

“It has character. There’s real variation,” Spottswood said of the revisions. “I feel this is a drastic upgrade from the first time I saw this.”

As with any development proposal, Cardinal Capital and the other firms’ involvement in the project can take the commissioners’ comments into consideration and possibly begin next steps, which would include obtaining a conditional-use permit.

If all goes as planned, Douglas said project construction is expected to take place over a five-year time span. “The market is going to determine the timeline,” he said.

Kenosha commissioners were less receptive to the latest plans associated with a proposed truck and trailer parking lot at 4415 88th Ave. and an adjacent distribution center at 8311 38th St.

Transport Properties and Northpoint Development are the companies overseeing the possible project, which is on land currently within the Town of Somers and subject to future annexation into the city.

The latest plans include a 213-stall truck and trailer parking lot and a proposed 729,600-square-foot distribution center. Company representatives said the project would bring upward of 400 jobs.

Ruffalo, whose aldermanic district would include the property once the land becomes a part of Kenosha, was less receptivel.

“I looked long and hard at this project,” Ruffalo said. “My problem is with the semi truck parking. I don’t think this is in the best interest of my district at this time.”

A number of questions and concerns — including landscaping and security — were raised. The project review was postponed for 30 days so further details could be provided.

This artist’s rendering shows the proposed 16-unit building that would be part of the Strawberry Fields Apartments project.

This artist’s rendering shows the proposed 94-unit building that would be part of the Strawberry Fields Apartments project.

This map shows the proposed site plan for the Strawberry Fields Apartments. Highway 50 is on the right.