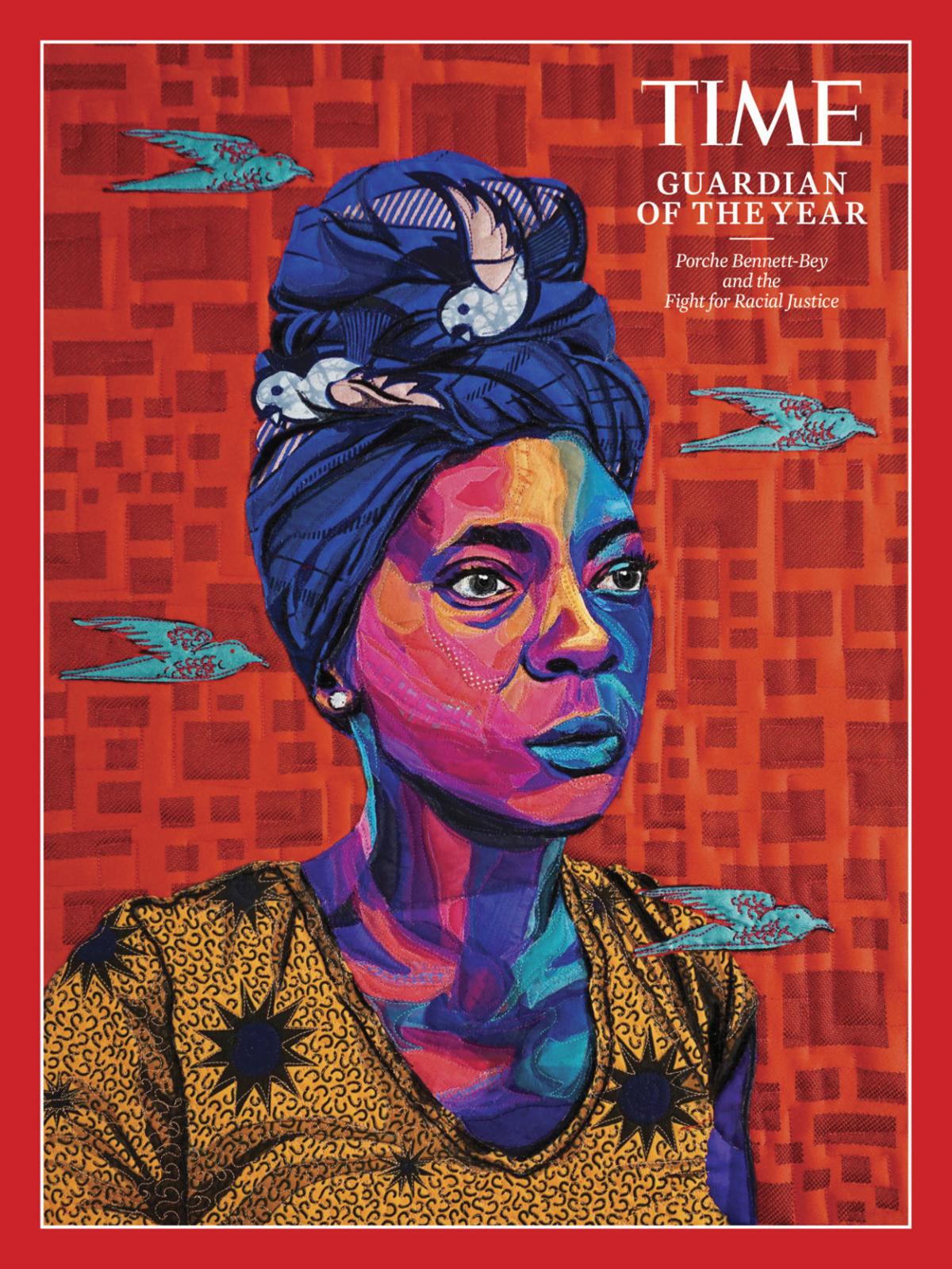 Porche Bennett-Bey of Kenosha was named a Time Magazine’s Guardian of the Year in the magazine’s annual Person of the Year edition. 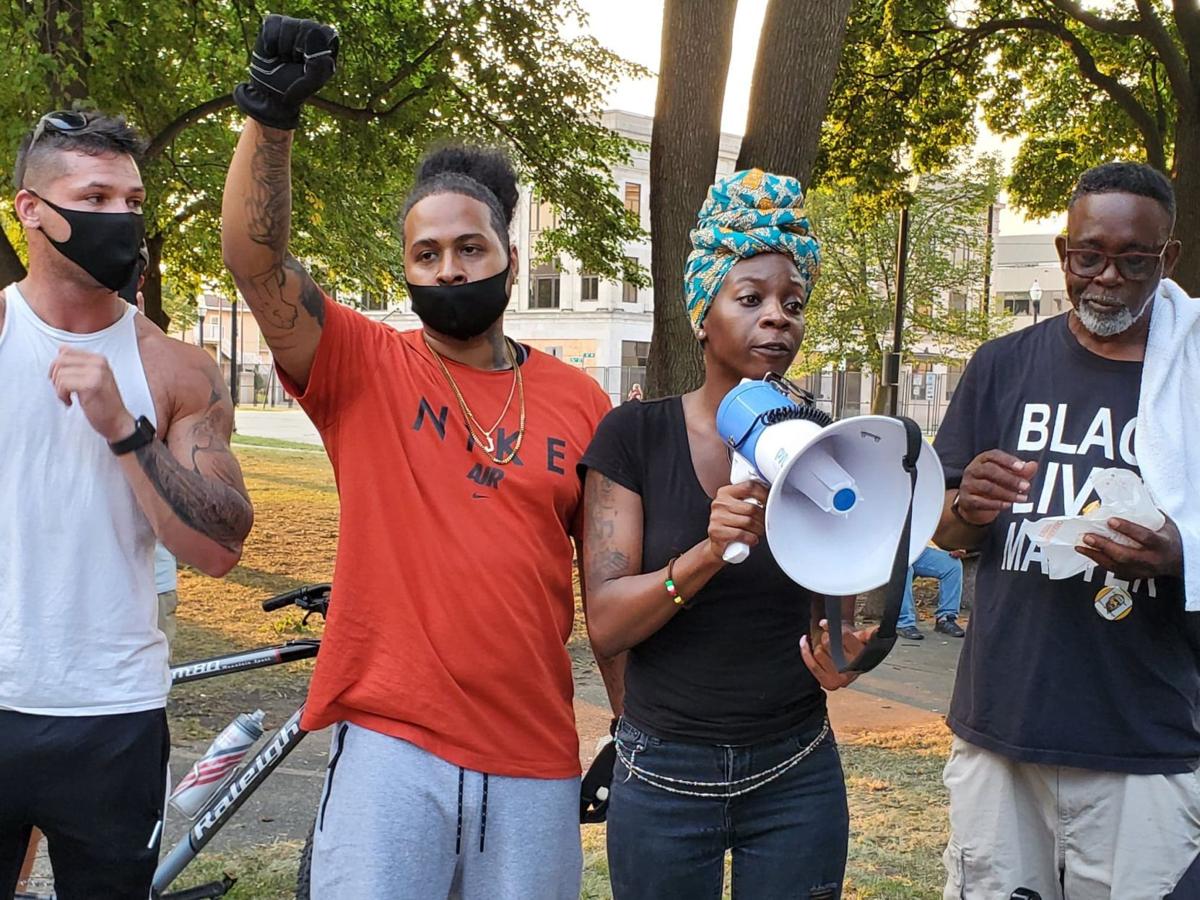 Porche Bennett-Bey holds a megaphone while speaking at the Aug. 26 peaceful rally at Civic Center Park. Bennett-Bey, 31, a native Kenoshan, condemned those who would destroy Kenosha and the violence that killed two Kenosha-area men during civil unrest on Aug. 25.

Bennett-Bey said she was stunned by the recognition, which was announced late Thursday.

“I thought it was just a normal article. I didn’t know I was going to be on one of the covers. I didn’t know I was Guardian of the Year,” she said. She said a representative of the magazine texted her Thursday and told her there would be a news release in the evening. “I clicked on it and (saw the cover) and I just freaked out and dropped my phone.”

Time named Joe Biden and Kamala Harris as Person of the Year in its annual issue. The magazine also names people of the year in other categories, including Guardian of the Year along with recognition of the athlete, businessperson and entertainer of the year.

She said she interviewed and photographed by staff at the magazine recently and said she had no idea she was in contention for the Person of the Year edition. The magazine includes a cover portrait of Bennett-Bey by fiber artist Bisa Butler.

Although Bennett-Bey said she was honored, she also sees it as a recognition for everyone who was working for social justice in the city.

“Even though I was chosen, Kenosha was chosen because we all had to fight this fight together,” Bennett-Bey said. “It’s an honor, but this is Kenosha on the cover of Time.”

Bennett-Bey, 32, is a lifelong Kenosha resident active in the social justice movement in Kenosha well before the Jacob Blake shooting made the city a worldwide focus of protest.

Throughout the spring and summer she had been organizing Black Lives Matter protests in Kenosha throughout the summer as part of a global protest movement that followed the May killing of George Floyd by a Minneapolis police officer.

When Jacob Blake was shot by a Kenosha Police officer in August, Bennett-Bey was one of the leaders of the peaceful protests at Civic Center Park.

Her comments to President Elect Biden when he came to Kenosha during the week of protests following Blake’s shooting captured national attention. Bennett-Bey was one of the local people chosen to meet with him for a listening session at Grace Lutheran Church in Uptown.

“A lot of people won’t tell the truth,” she told Biden. “But I’m telling the truth.”

At the listening session, she spoke frankly about the frustrations of Kenosha’s Black community, from concerns about housing to jobs to Black residents feeling that they were targeted by police.

“Why are there more police officers in the Black neighborhoods than other neighborhoods. Why are we more targeted than anyone else. We walk somewhere and automatically it’s ‘oh, you fit the description,'” she told Biden.

Since the Blake shooting and since Kenosha became a center of protest, Bennett-Bey said she has devoted herself to social justice full time, starting her own organization called United as One, and leads a Kenosha chapter of the social justice organization All of Us or None.

With the publicity that followed the protests, including her speaking out against the shooting deaths of two men by 17-year-old Kyle Rittenhouse during the unrest the evening of Aug. 25, Bennett-Bey received death threats and said she had to move into a hotel for a month.

But she said she is hopeful for the future of the community, the openness of some residents and community leaders to having difficult discussions about race and bias, and about the support of people who want to help those in need.

“As long as people in the city can keep having these difficult discussions and keep having conversations with each other, I do see change for the good,” she said. “So many people are coming together, doing things for the community around here and that is the vision I want to see.

“To see my thoughts and visions come to fruition, it’s an honor. I don’t want to stop, I just want to keep pushing,” Bennett-Bey said. “I don’t want Kenosha looked at as ground zero or a war zone anymore.”

In a new video published by Time Magazine, featuring Kenoshan Porche Bennett-Bey as the magazine's "Guardian of the Year," Bennett-Bey talks about her city's experiences with discrimination and her fight to change it.

Protesters march across a vacant lot toward the Kenosha Municipal Building on Friday.

T-shirts celebrating Kyle Rittenhouse were banned from online vendors like Etsy but still are sold by private vendors. He is charged with shooting three men, killing two, during a Kenosha, Wis. protest and is raising money for a defense.

Porche Bennett-Bey of Kenosha was named a Time Magazine’s Guardian of the Year in the magazine’s annual Person of the Year edition.

Porche Bennett-Bey holds a megaphone while speaking at the Aug. 26 peaceful rally at Civic Center Park. Bennett-Bey, 31, a native Kenoshan, condemned those who would destroy Kenosha and the violence that killed two Kenosha-area men during civil unrest on Aug. 25.