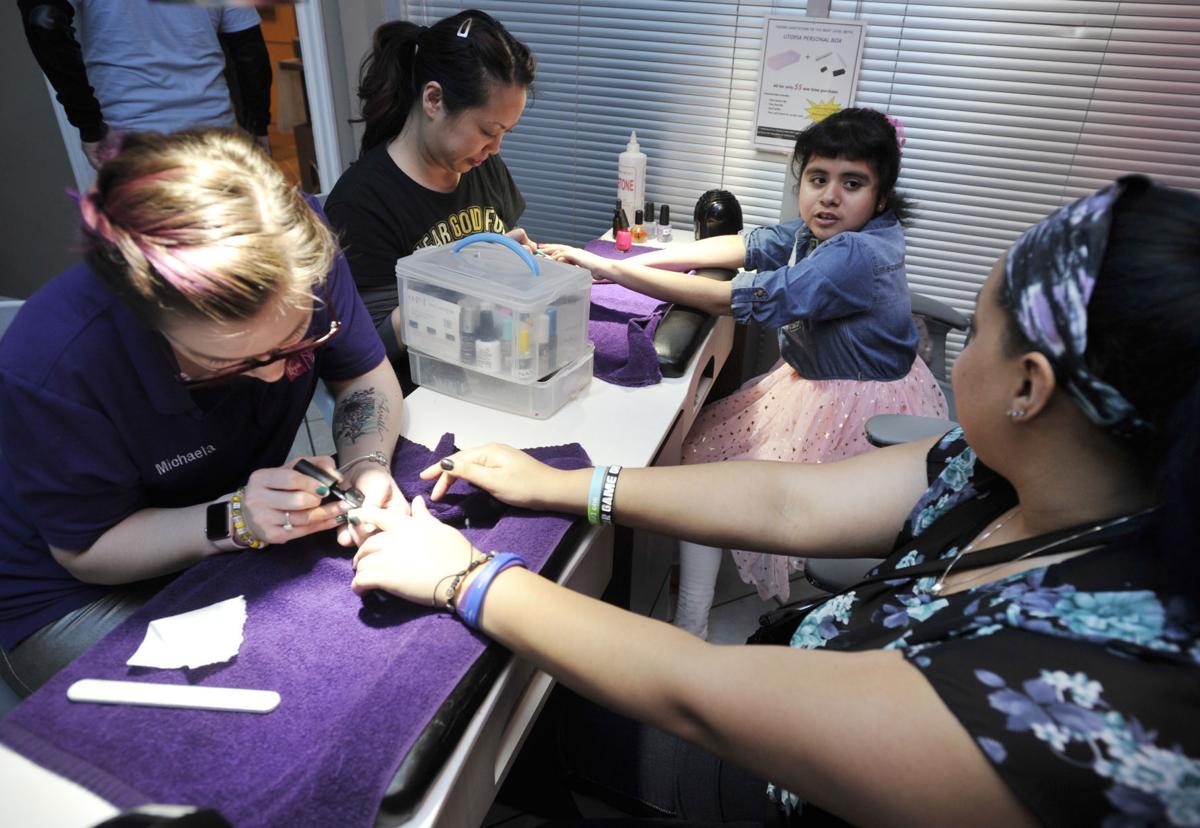 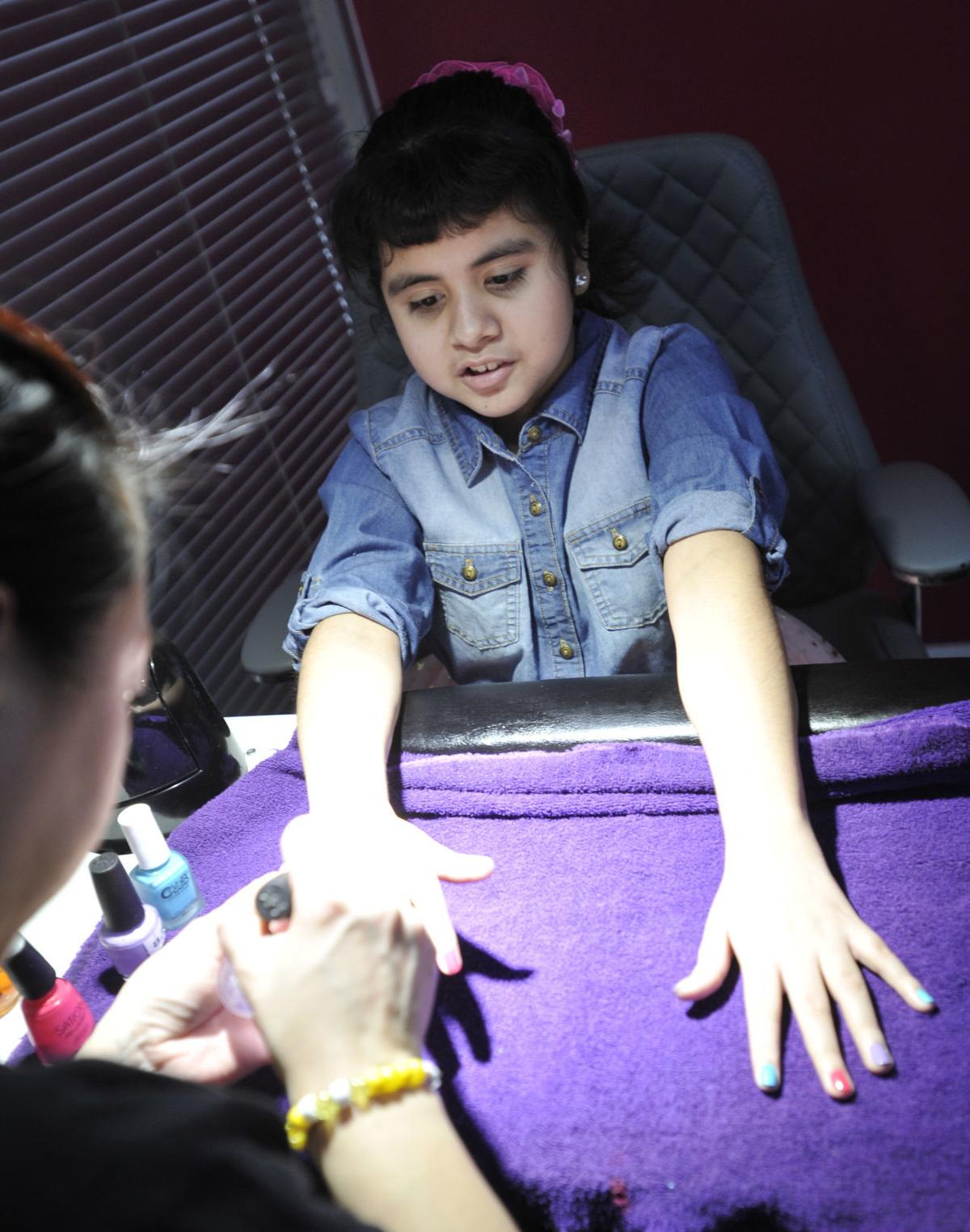 Sofia Matias, 10, gets a manicure from Natalie Curley during the spa day event for children with cancer at Utopia Nails & Spa on Saturday, Feb. 24, 2018. 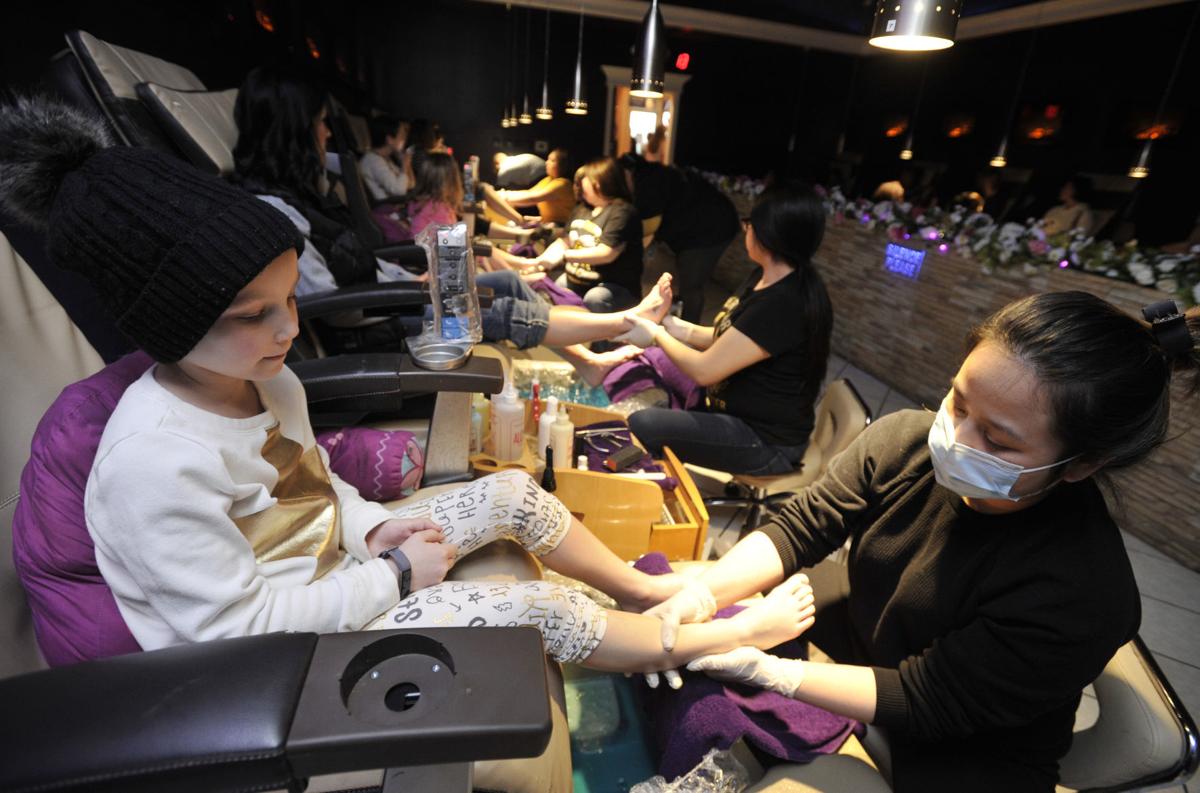 Harlow Millies, 7, left, gets a leg massage while receiving a pedicure from Mimi Rollman during the spa day event for children with cancer at Utopia Nails & Spa on Saturday.

Turquoise toes were the request of Sofia Matias, 10, of Kenosha, who got her first pedicure Saturday at Utopia Nails and Spa, which held a special “day of pampering” for children with cancer and their families.

Matias, who is in remission after chemotherapy treatment she completed last July, also got a “unicorn” manicure made up of multiple cotton-candy colors.

Jimmy Doan, general manger of Utopia, said it is the second year the salon has hosted the event. Last year spa technicians treated about 20 children and their family members to mani-pedis. This year, there were 40.

“They loved it,” he said. “The kids are the ones who asked for it again this year.”

Doan partnered with Kisses from Keegan and Friends, a nonprofit agency in Lake Geneva, to organize the event.

Paul Denecke said his family started the organization to pay the kindness shown to them when his daughter Keegan was diagnosed with acute lymphoblast leukemia, when she was 6. Keegan is now in remission, having completed treatment two years ago.

“We had so many people who were amazing to us, we wanted to do the same for others,” Paul said. “We know what the families are going through.”

Nora Millies, of Hartland, brought her daughters Harlow, 7, and Reese, 4, for a mother-daughter spa day. Like Keegan, Harlow was diagnosed in August with leukemia. She has 2½ more years of chemotherapy ahead of her.

“I feel like being able to see where they are now gives us hope about where we will eventually be,” Nora said.

Care was taken by the salon to make sure the environment was safe for those with compromised immune systems. No tools that could cut skin or expose the children to a risk were used. All other tools were new.

“We switched out all of the UV lights with halogen lights,” Jimmy said. “We wanted this to be a worry- and stress-free day.”

Nora said she appreciated the extra care that was taken. She and her daughters used to go to the spa together before the diagnosis but haven’t been able to since.

“Having it be a safe environment is awesome,” Nora said.

Suspended KPD officers back on duty: Traffic stop of 77-year-old woman led to unwarranted Taser use

A civil lawsuit was filed this week against the Kenosha County District Attorney’s Office by a former City of Kenosha alderman, Kevin Mathewson.

A crash in April with several vehicles led to the sixth drunken driving charge against a 49-year-old Kenosha man.

A judge said the case against the 42-year-old man has a "horrendous set of facts."

A 42-year-old Kenosha woman who stabbed a man late last year during a domestic dispute will serve 14 months in a state prison.

Sofia Matias, 10, gets a manicure from Natalie Curley during the spa day event for children with cancer at Utopia Nails & Spa on Saturday, Feb. 24, 2018.

Harlow Millies, 7, left, gets a leg massage while receiving a pedicure from Mimi Rollman during the spa day event for children with cancer at Utopia Nails & Spa on Saturday.