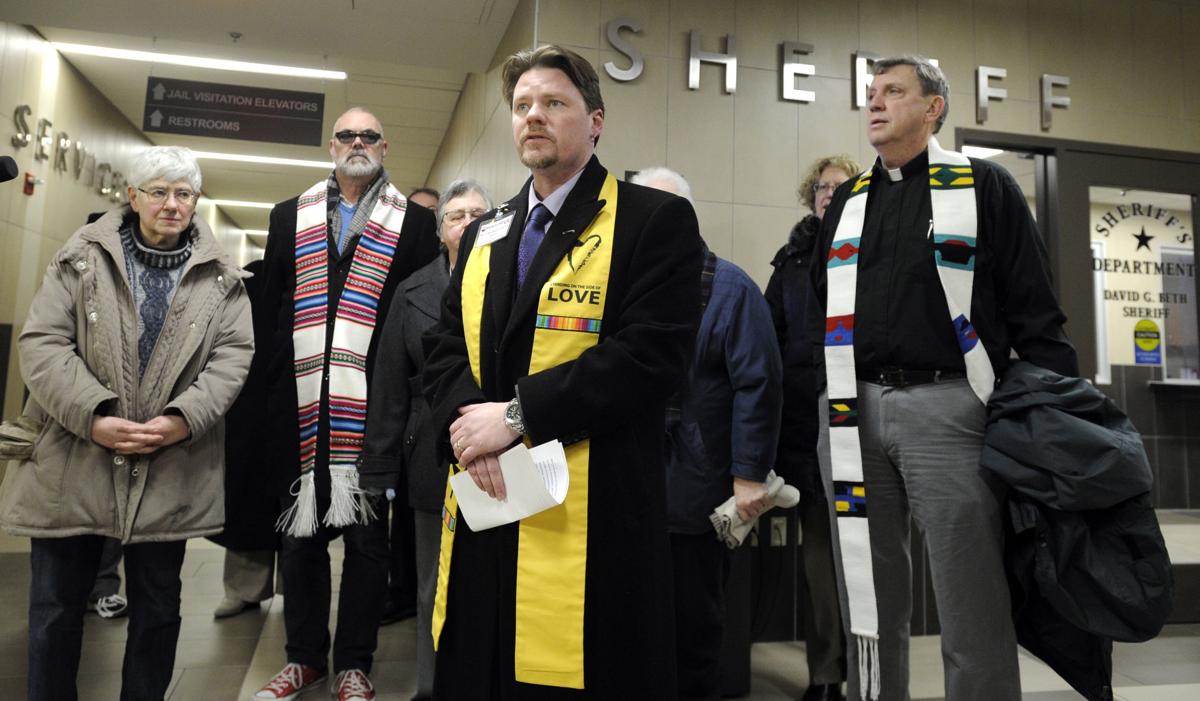 The Rev. Erik David Carlson, front, speaks on the behalf of CUSH at the Sheriff's Department on Wednesday, Jan. 31, 2018. 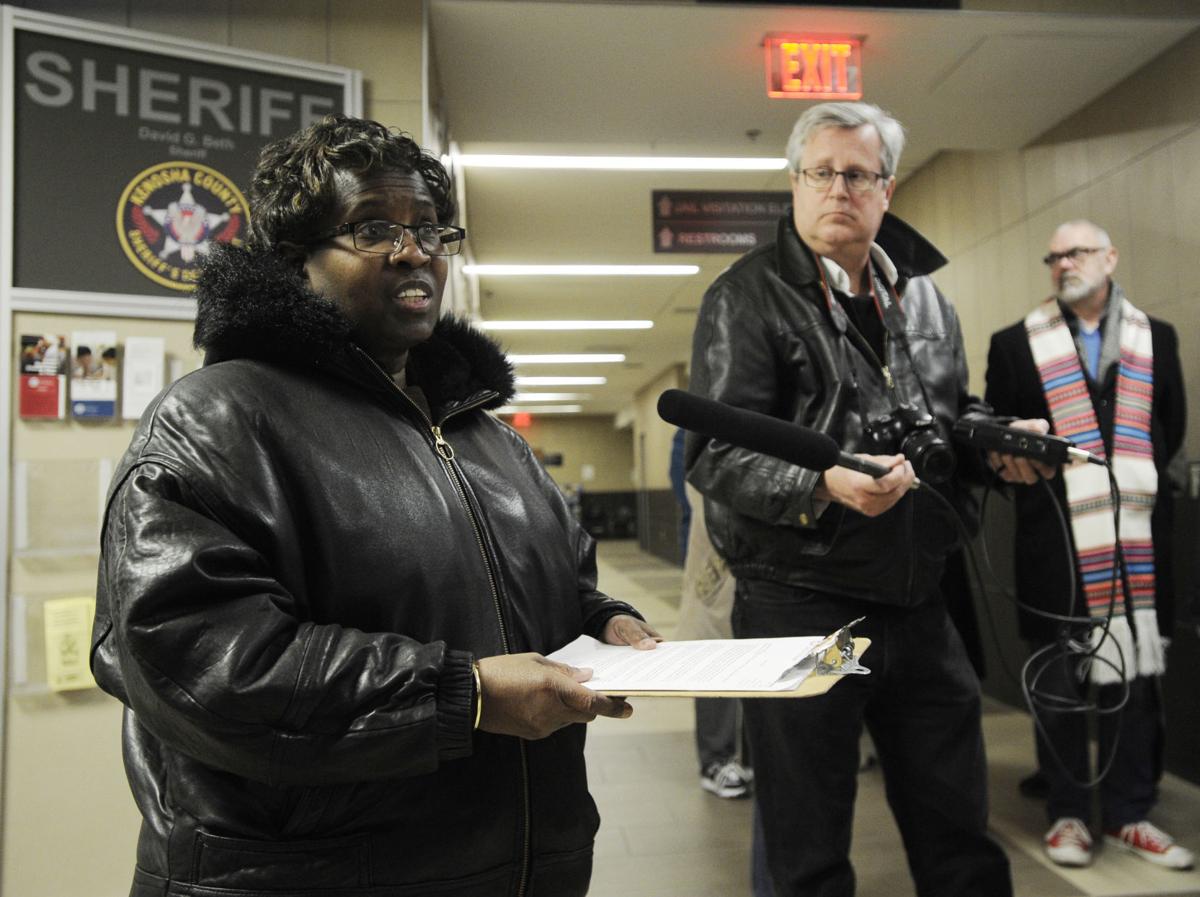 NAACP President Veronica King, left, Wednesday talks about the apology Sheriff David Beth issued regarding comments he made during a recent news conference. 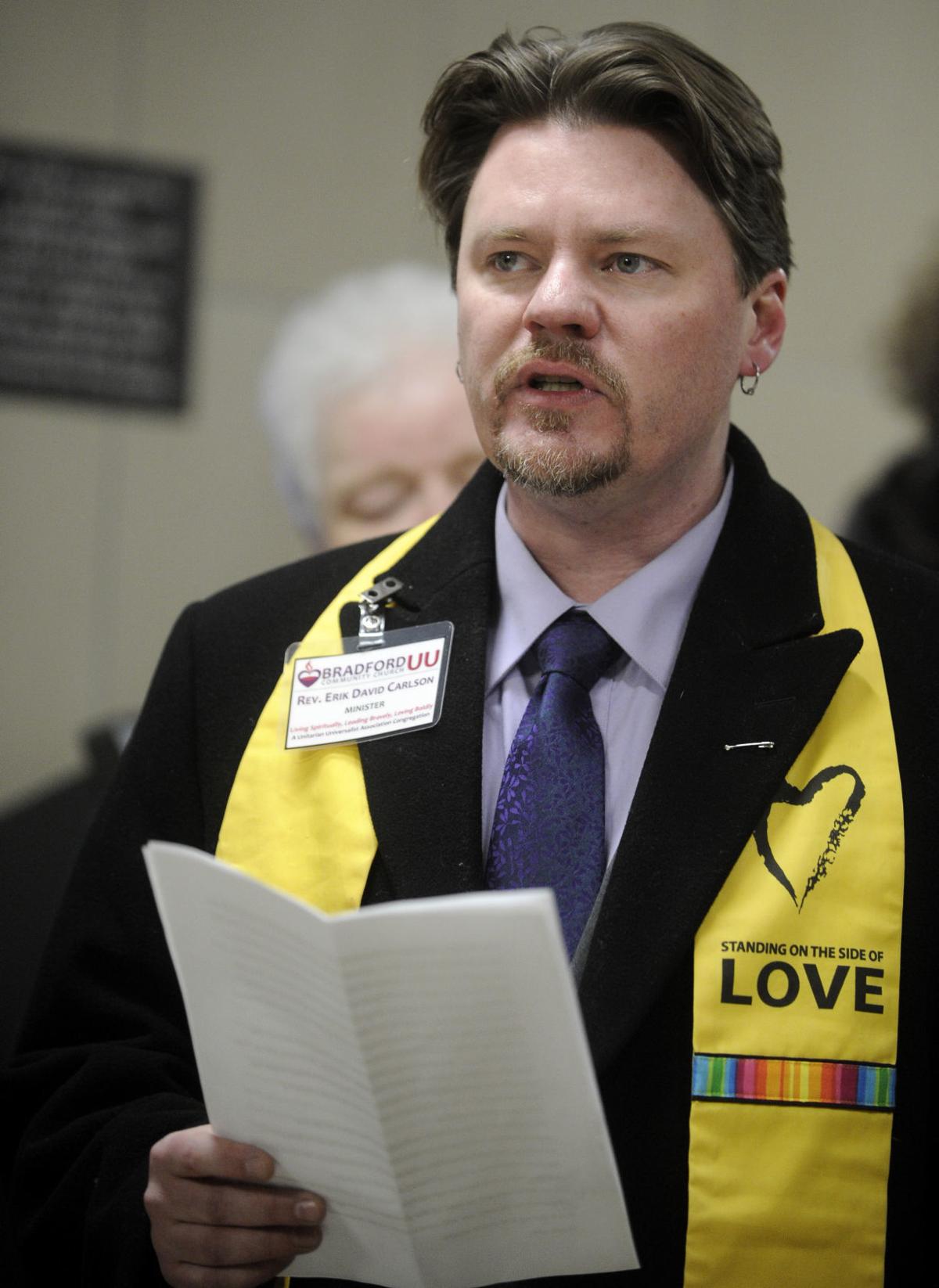 The Rev. Erik David Carlson speaks on behalf of CUSH at the Sheriff’s Department on Wednesday. 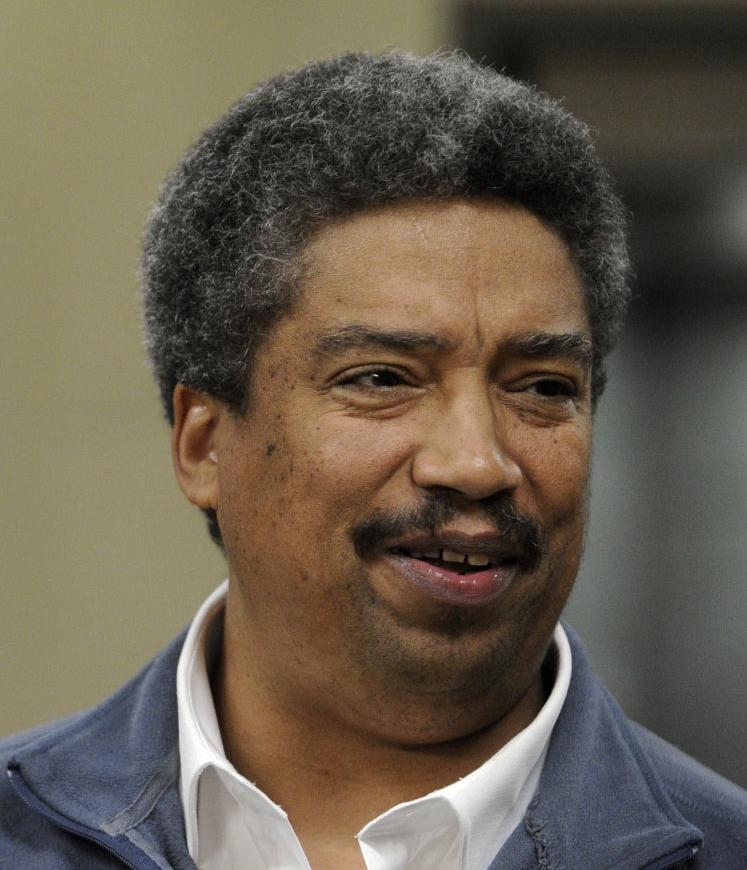 They decried what Beth said during a Jan. 25 news conference after the arrest of five suspects who allegedly stole nearly $4,800 in merchandise from a Prime Outlets mall store in Pleasant Prairie. The group members are also facing other charges from a chase and their arrest.

“I think at some point society has to get so fed up that they are no longer willing to tolerate people who are not an asset to society,” Beth said at a news conference after the group’s arrest. “I think we have to create a threshold where, once you cross the threshold, Wisconsin, the United States, builds warehouses where we put these people who have been deemed to be no longer an asset, that are really a detriment, like these five people.

“I have no issue with these five people completely disappearing. At (this) point, these people are no longer an asset to our community, and they just need to disappear.”

Beth issued a public apology Monday amid backlash for those comments.

“In the press conference, I should have kept my comments better directed toward the incident itself and not allowed my emotions to get the better of me at the time,” Beth said in his letter of apology. “I have been involved in hundreds of on-camera interviews and press conferences and have shared my emotions before, but never in this fashion or this extent.

“My goal is to do my best to protect those that live, work, play or travel through Kenosha County. In the situation last week, my comments did not necessarily live up to even my own expectations for my office, and I again apologize.”

“Sheriff Beth’s apology of Monday said only that his comments ‘did not necessarily live up to even my own expectations for my office’ but did not refute or qualify a single thing expressed in the press conference,” said the Rev. Erik David Carlson of Bradford Community Church. “We therefore invite Sheriff Beth to revisit his statements of Jan. 25 to clarify, on the record, his true feelings on these matters.

“We also invite him and the whole of the Sheriff’s Department into an open dialogue with concerned community leaders including but not limited to the lay leaders and clergy of CUSH,” Carlson continued.

He said he hopes Beth holds local listening sessions and meets with any offended residents.

Wednesday night, Beth told the Kenosha News he didn’t need to further clarify his feelings on the matter.

“Everything I basically said in the (Jan. 25) press conference is really the way I feel,” the sheriff said. “I am 100 percent for the people of Kenosha County, the victims of crime and those people that are vulnerable in Kenosha. It’s disappointing to me that (Carlson) feels more in support of crime and criminals.”

Veronica King, president of the local NAACP, met with Beth earlier this week and said his apology was a good starting point.

“He verbally apologized when we met. He then agreed to issue a statement and he agreed to meet with us on a regular basis,” King said. “He has agreed to work with us, move forward.”

King said she meets with Kenosha Police Chief Daniel Miskinis regularly, but hasn’t had the opportunity to meet with Beth until this week.

Ald. Anthony Kennedy expressed deep disappointment with Beth’s comments and slammed a clipboard with his speaking notes on the floor.

“We’re talking about a shoplifting incident (and) this man has gone and made these blanketed indictments of these people,” Kennedy said. “You are the No. 1 law enforcement (person) in the county of Kenosha. You have a job and a responsibility that goes beyond this garbage that you spewed out in front of the cameras. I understand being emotional — I’m emotional right now — but I’m still aware of what my stature is in this community.”

“You need to do better and you can do better,” Kennedy said. “I’m not willing to give him a pass.”

“We need to heal and move forward. I’m not there, yet,” Kennedy said.

Beth said “no pass is required” and stood his ground saying he is “100 percent against crime and criminals in the county, and I will stick with that as long as I have a badge,”

The Rev. Kathleen Gloff, of Somers Community United Church of Christ, said everyone deserves forgiveness after atonement — including Beth.

“I’m personally disappointed. Sheriff Beth has participated in things that CUSH has done in the past. He has met with the religious leaders caucus in the past. I find his comments disheartening, but beyond my personal level of disappointment, all I can say is there are no continuous, permanent allies, and there are no continuous, permanent enemies,” Gloff said. “The proof will be in where we go from here.”

Beth said when he met with NAACP and CUSH members on Monday he understood that referring to warehousing people could be taken as offensive. He said, however, he didn’t believe that there was reason to atone.

“The goal was not to offend people. Again ... I’m very disappointed in the people who stand more for criminals and crime. I stand for the people who have had the crimes committed against them and we all pay the price for crime,” he said.

We’ve witnessed the four steps below play out, over and over again on the national stage. Now, it is happening in our own backyard.

The Rev. Erik David Carlson, front, speaks on the behalf of CUSH at the Sheriff's Department on Wednesday, Jan. 31, 2018.

NAACP President Veronica King, left, Wednesday talks about the apology Sheriff David Beth issued regarding comments he made during a recent news conference.

The Rev. Erik David Carlson speaks on behalf of CUSH at the Sheriff’s Department on Wednesday.