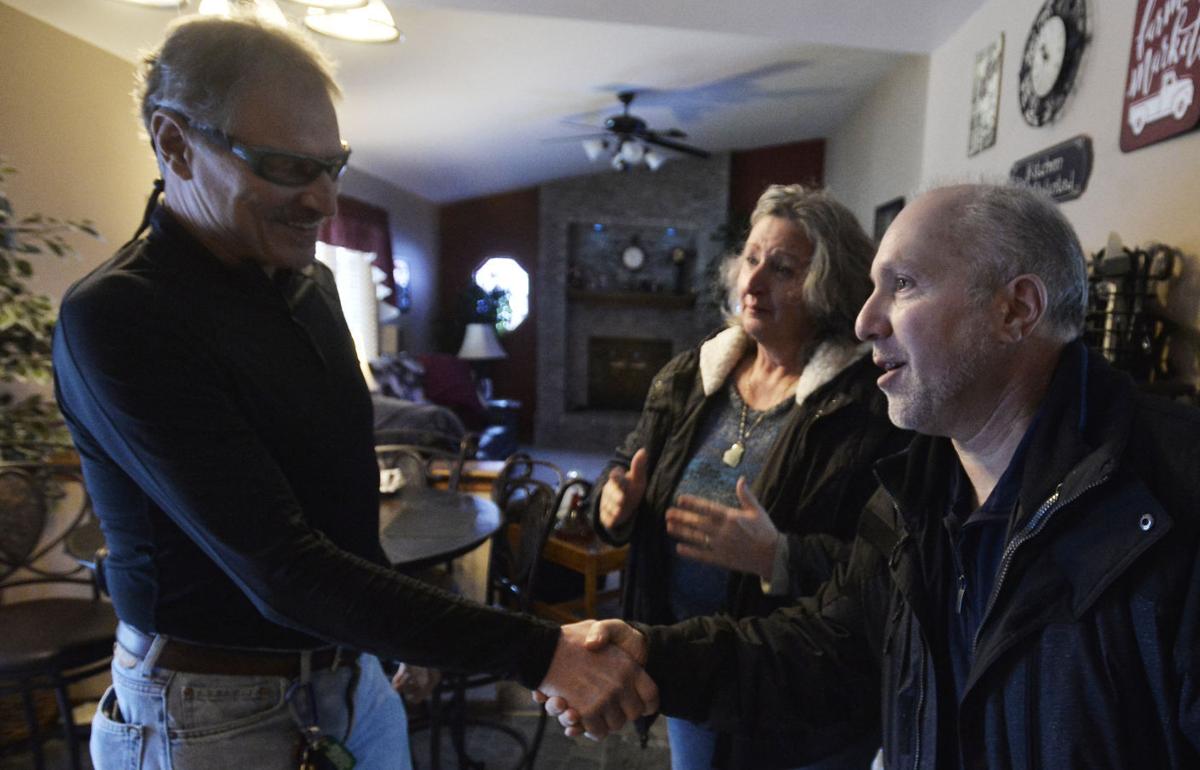 Bill Karls, left, shakes hands with Brian Jaffe, right, Loretta Jaffe looks on. The Jaffes were driving by when they saw Karls on the ground being helped by neighbors after suffering cardiac arrest and stopped to assist with a blanket and CPR efforts. 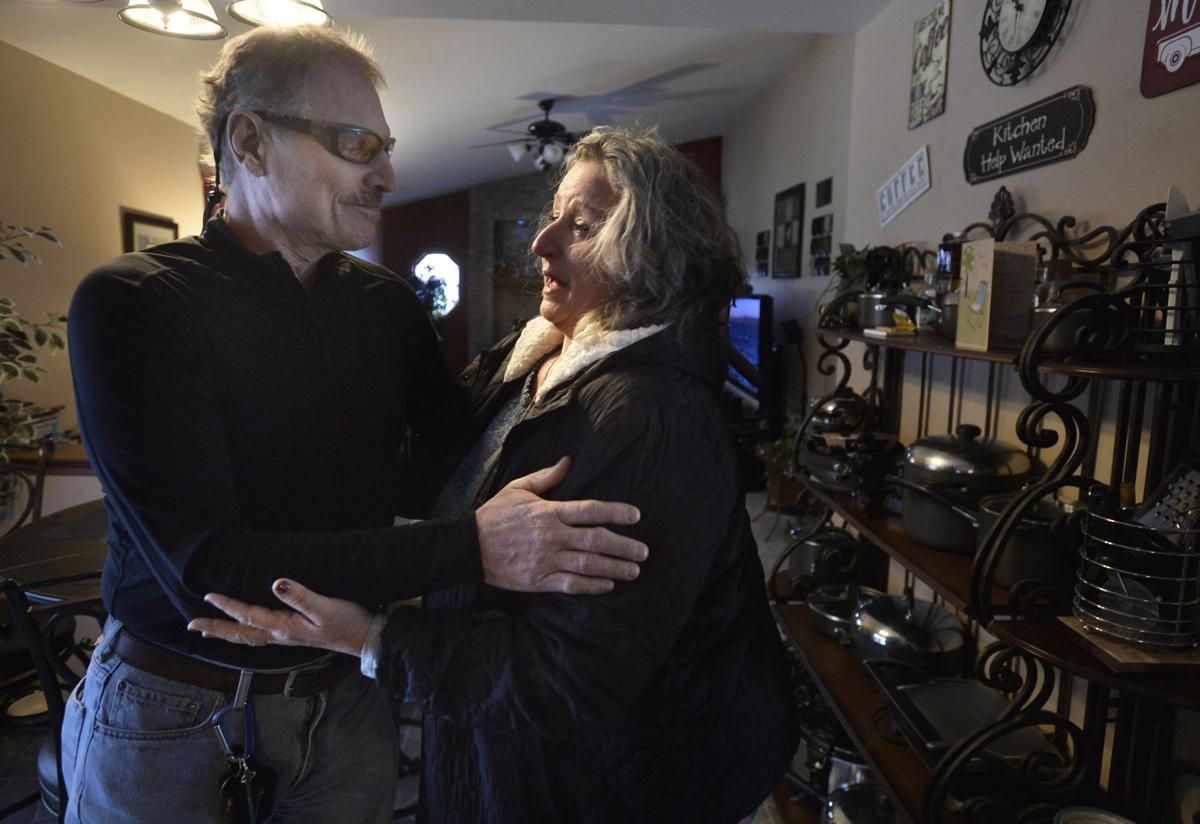 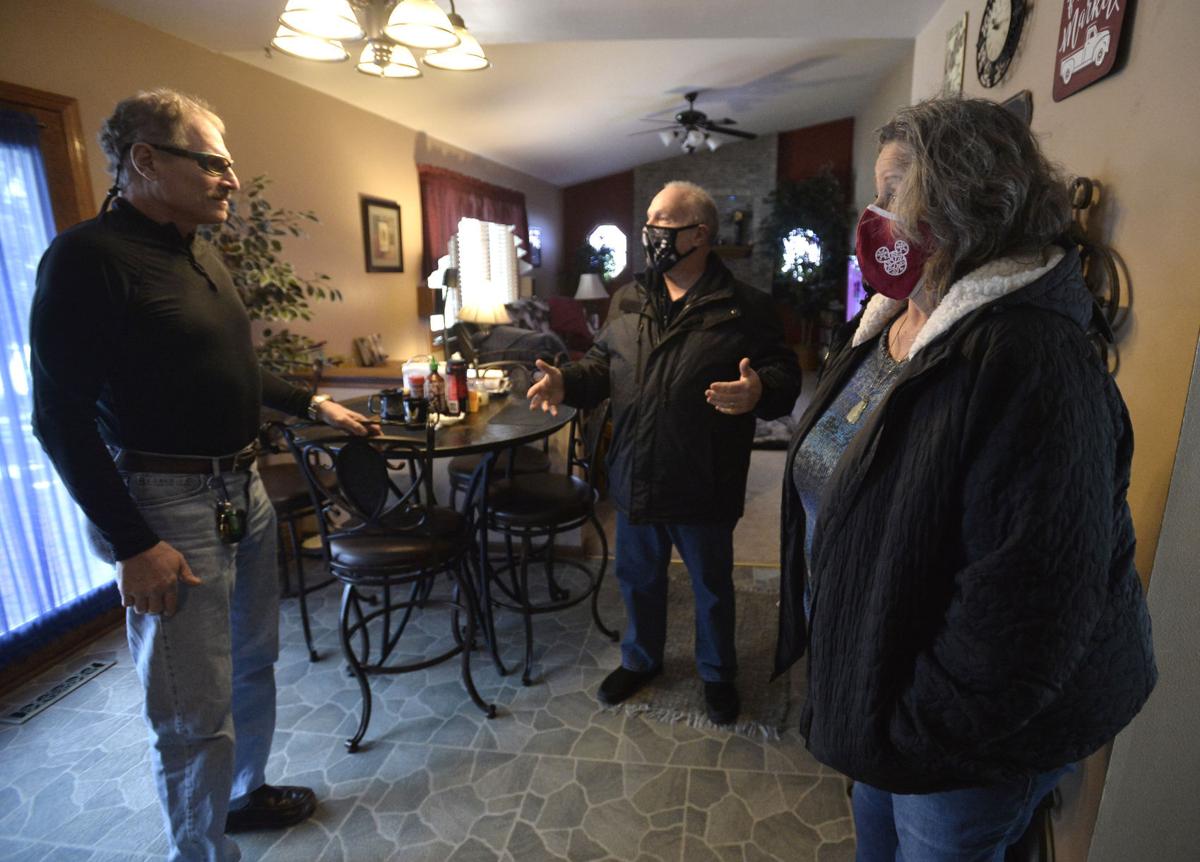 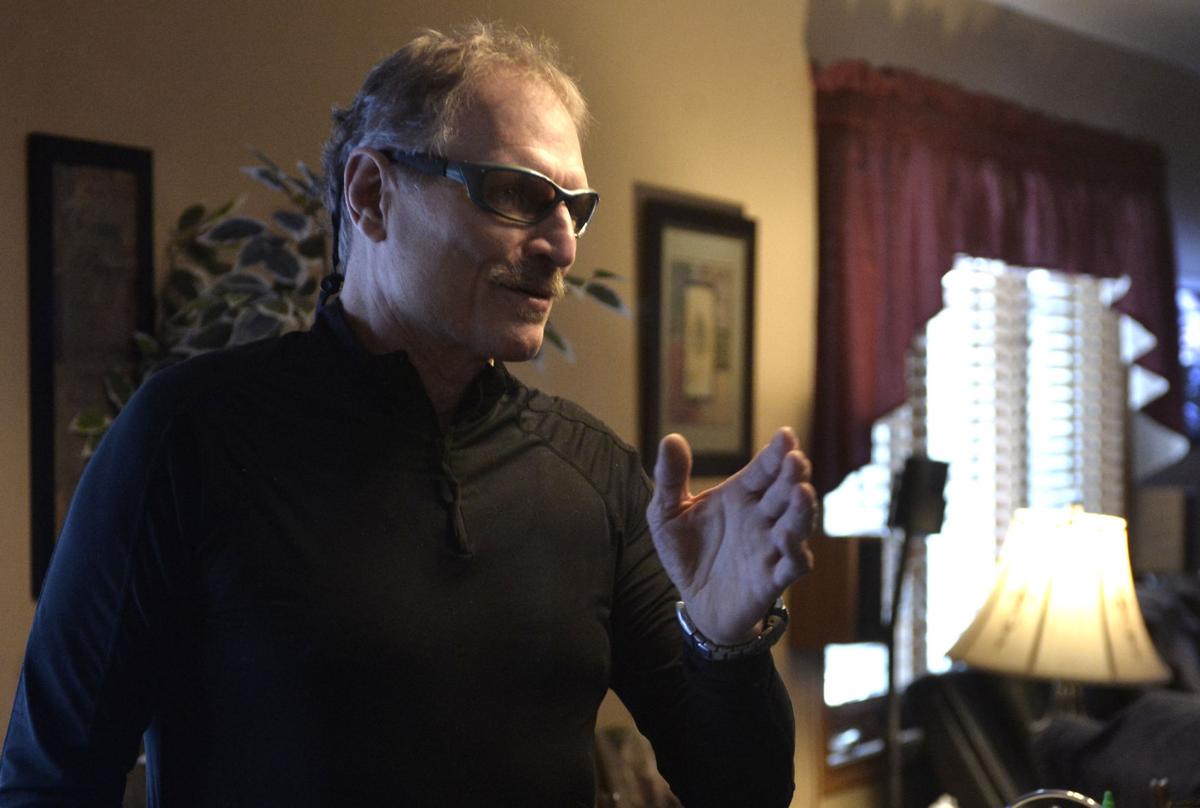 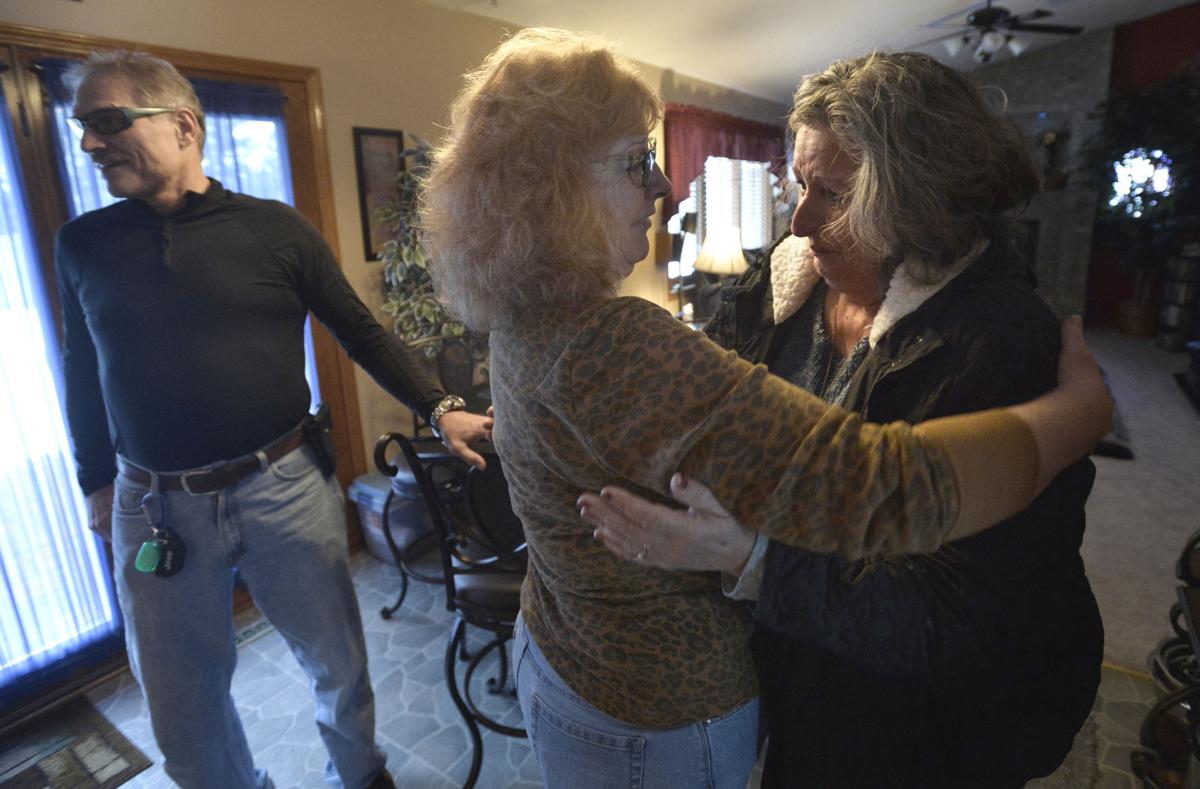 When Bill Karls was struck by a heart attack two weeks ago, little did he realize nothing short of a village would come to his aid.

The quick thinking and actions of three neighbors and a couple who were just driving by helped save Karls’ life until the paramedics arrived.

On Jan. 2 Kenosha resident Karls, 64, suffered a heart attack in his driveway as he was finishing removing snow from the sidewalks of his Northside neighborhood.

Tony DeLuisa, Karls’ across-the-street neighbor, and a friend of his, A.J. Green, were the first to assist Karls.

“A.J. came to the door and said, ‘Hey, do you know Bill from across the street? It looks like something happened to him!’” DeLuisa said.

Green called 911 while another neighbor, who prefers to remain anonymous, began attempting CPR on Karls.

Just then Brian and Loretta Jaffe of Kenosha drove by, saw the efforts being made by the neighbor, and stopped to help. Green asked them if they knew CPR. When they said they didn’t he handed Brian the phone to speak with the dispatcher who guided Loretta through the process until paramedics arrived.

In a phone conversation earlier this week, Karls said he was completely unable to recall the events of that day. His girlfriend, Cindia Schultz, said they also didn’t know the identity of the couple that had rushed in to help.

On Friday, with the help of DeLuisa and city property tax records, the couple was identified and contacted. On Saturday, the Jaffes were invited to meet with Karls and Schultz in his home.

During the tearful reunion, the Jaffes recounted the events of that day.

“We were driving and saw him lying on his back in his driveway and Loretta said, ‘We’ve got to stop,’” Brian said.

Running snowblower fell on top of him

Karls snowblower was still running and had fallen on him. The Jaffes lifted it off Karls and got a blanket from their car to put over him.

DeLuisa and Green were also there. DeLuisa, who had known Karls for over 20 years, told the Jaffes that Karls had an underlying heart condition. Green then handed the phone to Brian who spoke with the dispatcher, and Loretta began administering CPR.

“We could see you were barely breathing and you had a very glazed look in your eyes,” Brian said to Karls at the Saturday meeting. “Your skin color was different and your lips were barely moving.”

“I was talking to you though — I said, ‘You aren’t going anywhere!’” Loretta said.

When the paramedics arrived minutes later, Loretta continued doing compressions until the EMT told her he would take over. “I said ‘Yes, please take over!’” she recalled.

Karls was taken to a local hospital where a pacemaker and defibrillator were installed. The heart attack had apparently resulted following the “closing up” of a double bypass he had undergone 10 years ago, Schultz said.

As the paramedics drove off, the Jaffes were concerned for Karls’ outcome. “We could see the ambulance shaking while they worked on him but of course the paramedics couldn’t tell us anything at the time,” Brian said.

The Jaffes did not know the outcome of their good works until Friday, in part because Karls lived alone. Schultz had been planning on visiting him from Nebraska for New Years but her travel had been delayed by weather.

“I’m so glad to see you standing!” Loretta said to Karls Saturday. “I am just so pleased — I’ve been just checking the papers last two weeks — my last resort was to call the hospital,” Loretta said.

“We’re glad to see you up and about doing so well,” added Brian. “You’re looking really good!”

Karls and Schultz realize how lucky Karls had been that he was outside the house rather inside all alone that day.

“Thank God you guys were there at the time,” Karls said to the Jaffes. “It’s a spiritual thing to me.”

Providence may have had a hand in things, agree the Jaffes.

“To me it’s karma — we don’t normally take these streets but when it’s slippery out we go to a street with a stoplight. We saw the other guy on the phone and saw (Karls) laying there and said, ‘We can’t just drive by,’” Brian said.

“It was just the right thing to do — even if we weren’t sure how to do it at the time,” Loretta said.

“Everyone should stop to help their neighbors, even if they don’t know them,” Brian said.

WATCH NOW: K9 Riggs gets a hero's welcome as he is released from veterinary hospital

A plane crash, a firefighter in trouble, and a Burlington family converge in lawsuit

The City of Burlington is fighting a lawsuit filed by a member of a local pioneer family, who says the city employed an "unfit" firefighter and the firefighter damaged the family's privately owned bridge by driving a fire engine across it to reach a fatal airplane crash.

Bill Karls, left, shakes hands with Brian Jaffe, right, Loretta Jaffe looks on. The Jaffes were driving by when they saw Karls on the ground being helped by neighbors after suffering cardiac arrest and stopped to assist with a blanket and CPR efforts.