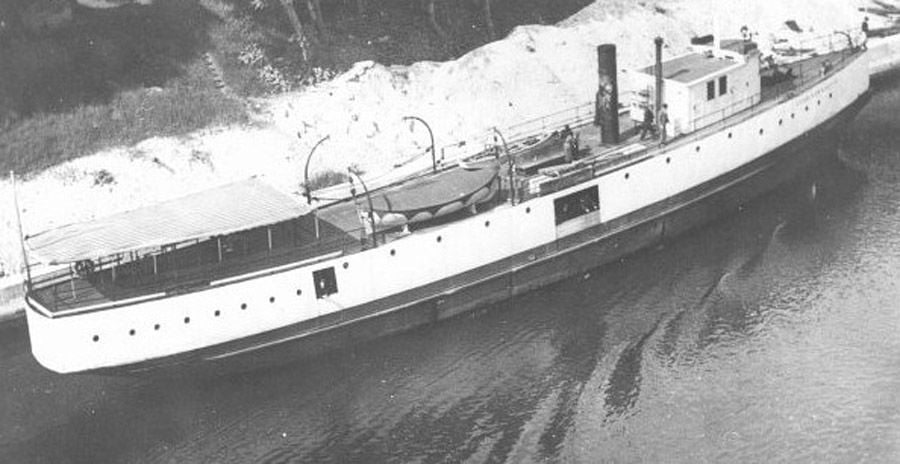 Editor’s note: This is the second part of a two-part series. Sunday’s first installment of this month’s Old Kenosha focused on the commercial fishing trade here in 1931 as told by a young man who joined the crew of the Marold II for a day. A little less than six years later, the Marold II was in newspapers all over the Great Lakes region linked to a prominent Kenosha transportation family.

Few commercial ships on the Great Lakes began their working life with the luxuries of the Marold II.

She was built in New Jersey as a yacht in 1911 for Alexander Winton of the Winton Motor Carriage Co. of Cleveland. Winton named the vessel “La Belle”, after his wife, Labelle MacGlashan Winton.

The cabin, with its eight staterooms, a large kitchen and upper works, were wood, possibly mahogany, built over a hull of half-inch steel plate braced with steel ribs.

When German U-boats terrorized the North Atlantic in World War I, La Belle was pressed into service by the U.S. as a sub chaser.

In 1919, the La Belle was sold to another auto pioneer, Harold Willis, who changed her name to Marold II, a combination of Harold and Mary, his wife’s name.

The name change may have traded in her good luck for bad.

In 1925, she caught fire on the St. Clair River, which links Lake Huron to Lake Erie. The blaze gutted the ship down to the hull.

Enter Capt. Ludlow L. Hill, who purchased it for a rebuild. Hill enclosed the entire deck of the Marold II all around with a steel wall about 6 feet high and a steel roof.

The Hill family is notable in Kenosha for establishing the Hill Steamboat Line, which operated four ships, hauling freight and passengers daily between Chicago and Port Washington from 1906 until it was absorbed by the Westport steamship line in 1925.

Like any family business, it employed family members as crew, engineers, clerks and cashiers.

Capt. Hill and his wife, Flora, raised the younger children of their family of nine here in Kenosha at 2105 35th St.

Their son, Leon, established his own reputation as a marine engineer on the Great Lakes.

The Marold II was used to haul freight all over the lake in the summer and was used in winters in Kenosha as a commercial fishing boat.

But the hard times of the Great Depression took a toll on the family enterprises. The Marold II was sold at a public auction at her Kenosha pier by a Milwaukee federal marshal. It was purchased by Hill’s son-in-law, radio personality Tony Wons, who put it back into the hands of Capt. Hill.

The Marold II’s future lay in the far north end of Lake Michigan.

By 1936, talks were underway with potential buyers, the Beaver Island Transit Co., but a turn of events would change everything.

The Boyd was carrying 900,000 gallons of aviation fuel valued at $180,000. It was soon acknowledged that the freighter was stuck, and the owners relinquished her for salvage.

Fishing tugs and small boats from the island made numerous trips to the wreck to fill their gas tanks for free.

Everette Cole, an official of the Beaver Island Transit Co., wanted that fuel. He sent the Rambler, a company freighter that could carry 9,000 gallons of fuel, out to the Boyd a couple of times.

Some sources say the company had recently obtained controlling interest of the Marold II.

In the negotiations to purchase the Marold II, the businessmen had talked of keeping on Capt. Hill, 81, and Leon, 54, to sail her.

The Marold II had just taken on the assignment of mail boat to the island, but Cole proposed switching roles with the Rambler. Would the Marold II make a run to the Boyd and fill her 20,000 gallon bunkers with the precious fuel?

It was the last time anyone saw the men alive.

Smoke on the horizon

Late in the afternoon, a woman in the village of Epoufette in the Michigan Upper Peninsula, 6 miles from the reef, saw flames shoot into the sky. Residents up and down the Upper Peninsula coastline heard the thunderous blast, saw the smoke and took up their field glasses. No one saw a lifeboat.

On Beaver Island, smoke alerted the Coast Guard. Picking their way through the ice floes in the dark, they arrived on scene at 11:30 p.m., but the intense heat kept them at bay.

Joined by other Coast Guard vessels from Charlevoix and Mackinac Island, and the Rambler, the search went on all night for survivors.

The next day the burned bodies of Everett and Raymond Cole were found in the wreckage, the latter identified by his pocket watch.

According to an Associated Press report, “The top deck and pilot house of the Marold II were blown right up onto the deck of the Boyd,” Beaver Island Coast Guard Capt. Ludwig said.

“The all-steel mail boat was completely wrecked and must have gone to the bottom shortly after the explosion. The lifeboats were missing, but they might have been blown to bits. It is doubtful whether any of the men aboard even had a chance to lower the lifeboats.”

Investigators soon learned that the Marold II wasn’t equipped with a blower in the upper deck. A heavy accumulation of gas fumes was probably touched off by a spark. Most of the fuel in the Boyd’s tankers was still intact.

It was reported in The Kenosha Evening News of Jan. 4, 1937, that the sale of the Marold II to the Beaver Transit group had not yet been completed and the title was still in Capt. Hill’s name.

Ironically, the insurance on the Marold II had expired at midnight Dec 31, 1936, without renewal.

Grim news; foolhardy soulsIt would be a long winter wait for closure for the Hill family.

Capt. Hills’ body washed ashore at the southwest end of Beaver Island in the spring. Leon’s body drifted far west and was found in May on a beach near Fairport, Mich., just 15 miles from Washington Island in Door County, Wis.

The body of Bruce McDonough was never found.

In mid-February of that year when the ice solidified to a desired thickness, people from all over the long coastlines of Michigan came to the Boyd. They filled barrels, cans, jugs, jars and buckets of fuel and took it home.

One trucker broke through the ice with his barrel-laden truck and drowned.

There is a very remarkable six-minute YouTube video of gas scavengers descending on the Boyd shipwreck. Search for “Marold” and “Boyd” and it will appear in the feed.

In the video you will see the mangled deck of the Marold II. Be forewarned: The video contains a few seconds of the men pulling a frozen body from the lake.

Editor’s note: This is the first part of two-part series. The second part will appear in Monday’s edition.